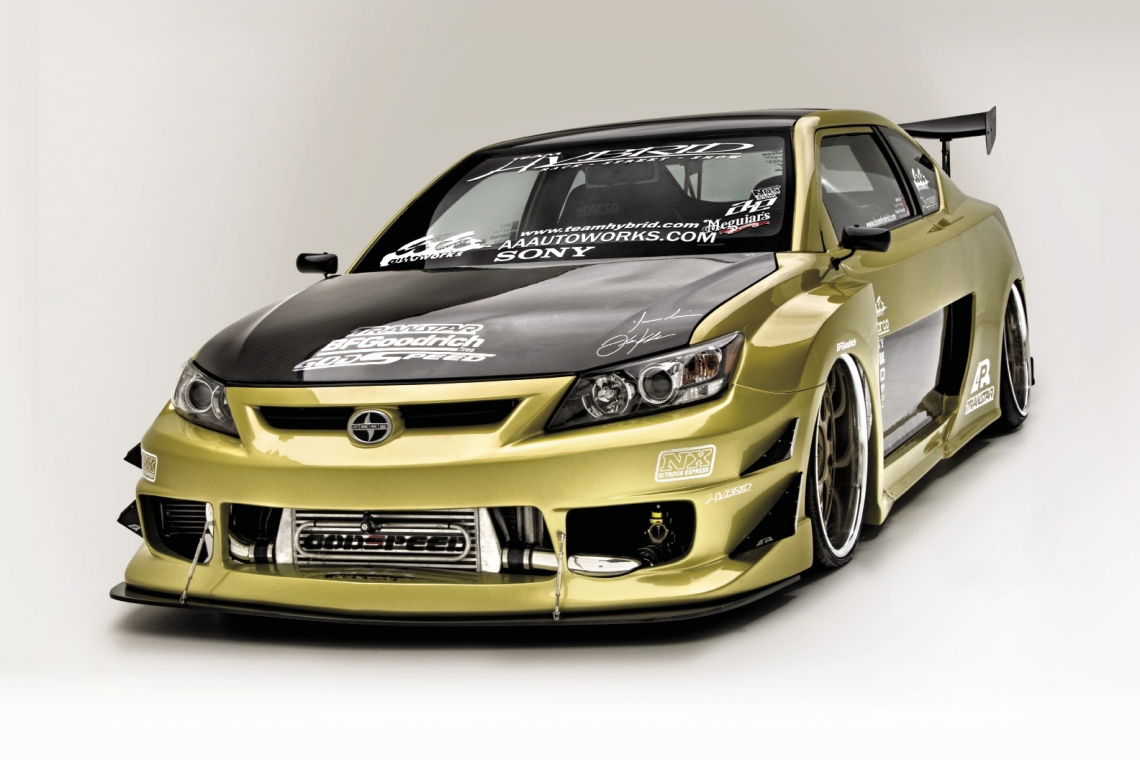 As the both President and Founder of Team Hybrid and Hybrid Hunnyz, James Lin has earned his stripes to become one of the leaders in the custom Sport Compact business. Since 1995, his level of commitment has been unwavering and his builds earn covers and features in every magazine title that you have ever been in to.

The sponsorships, the praise, the trophies and many other import accolades have piled up for Lin & Team Hybrid over the years. Lin said, “May 16+ years of Team Hybrid’s legendary tradition, philosophy, innovation, management and quality continue making import history.” Lin takes the import tuning game seriously and over the years companies have realized he is the go-to guy to build demo cars, tour them all over the place and bag awards, covers and features for all of his hard work!

Back in 2006, Lin and Scion formed a lasting relationship to put their cars on the map. His Scion xA build earned him 1st place in the National Scion SEMA Tuner Challenge that year and he repeated his performance with a Scion xD in 2007. As a back-to-back champion, he had to share the spotlight in the following years but never stopped trying, which is how this golden 2011 Scion tC was born. 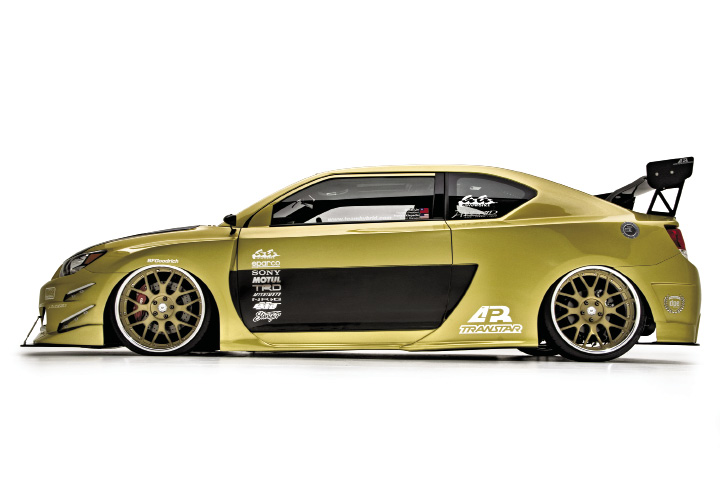 “Since there weren’t any commercially available parts for this car, I needed to innovate, project direct and outsource the development of parts as one-off pieces while relying on loyal sponsors,” said Lin. “The foundation for the design process was my philosophy of building clean, innovative cars that can win at the race-street-show. I attribute this multi-disciplinary approach as the primary reason Team Hybrid has become legendary in the tuning industry and another main reason why Scion selected me to compete for the third time.”

We rolled up on Lin at SEMA standing beside his tC like a proud father. He was walking us through all of the challenges he had to work through to make it happen. The most striking feature of the build was the elaborate widebody, which of course was entirely custom since nothing had made it to market when he took delivery. AA Autoworks stripped the car and began to redefine its whole appearance. The body was completely shaved of everything and widened by 3 inches on both sides. AA Autoworks added carbon fiber inserts on the doors and fenders. AIT Racing fabricated a custom hood and trunk, using dimensions for their own product available today. AIT Racing also offered up their front carbon fiber splitter and rear diffuser to manage airflow around the car. APR was contacted for a set of their front bumper canards, some of the GT carbon fiber mirrors and the quintessential GTC300 wing! The entire project was shot in several layers of Transtar custom mix gold paint applied by AA Autoworks. 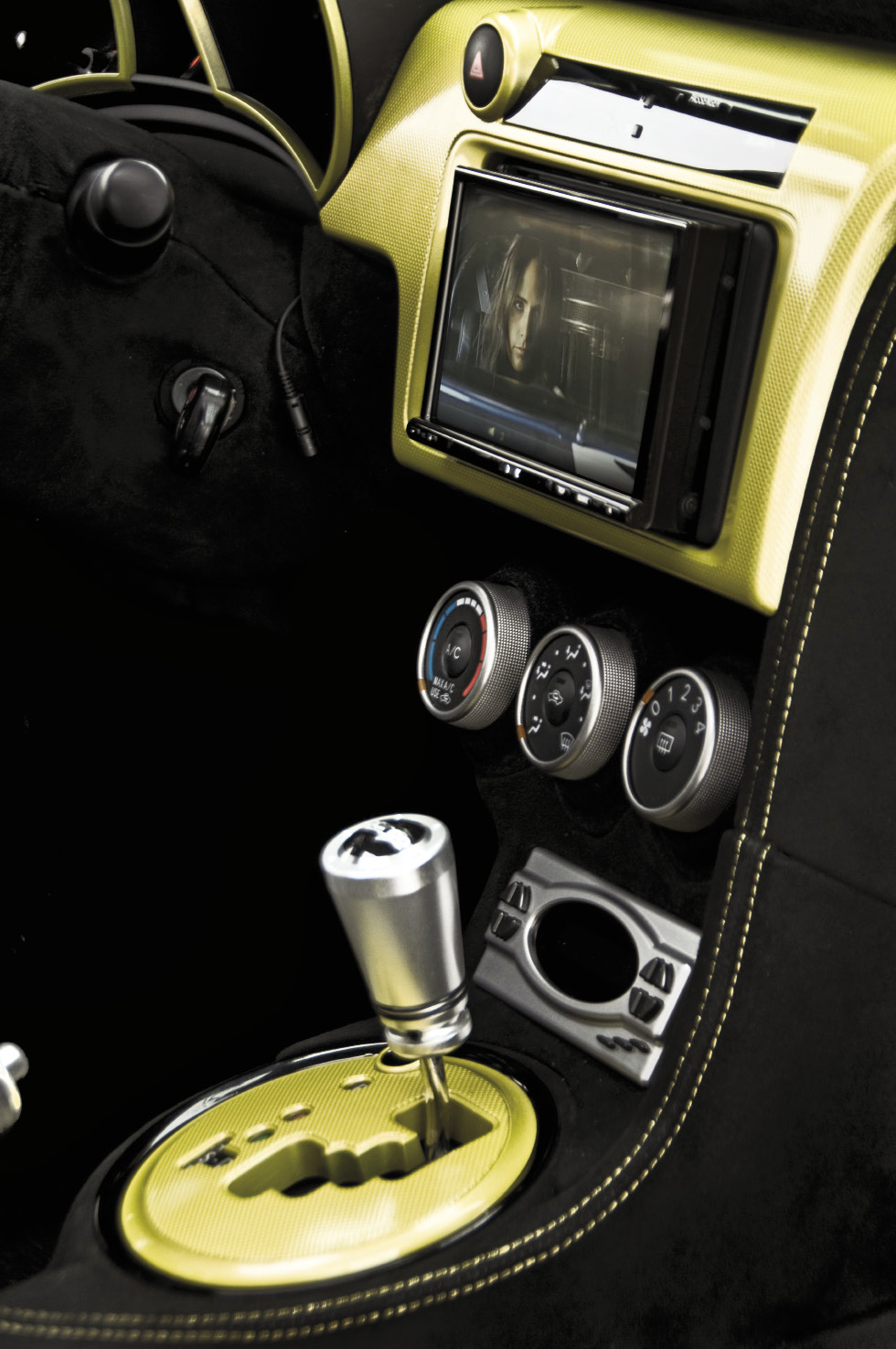 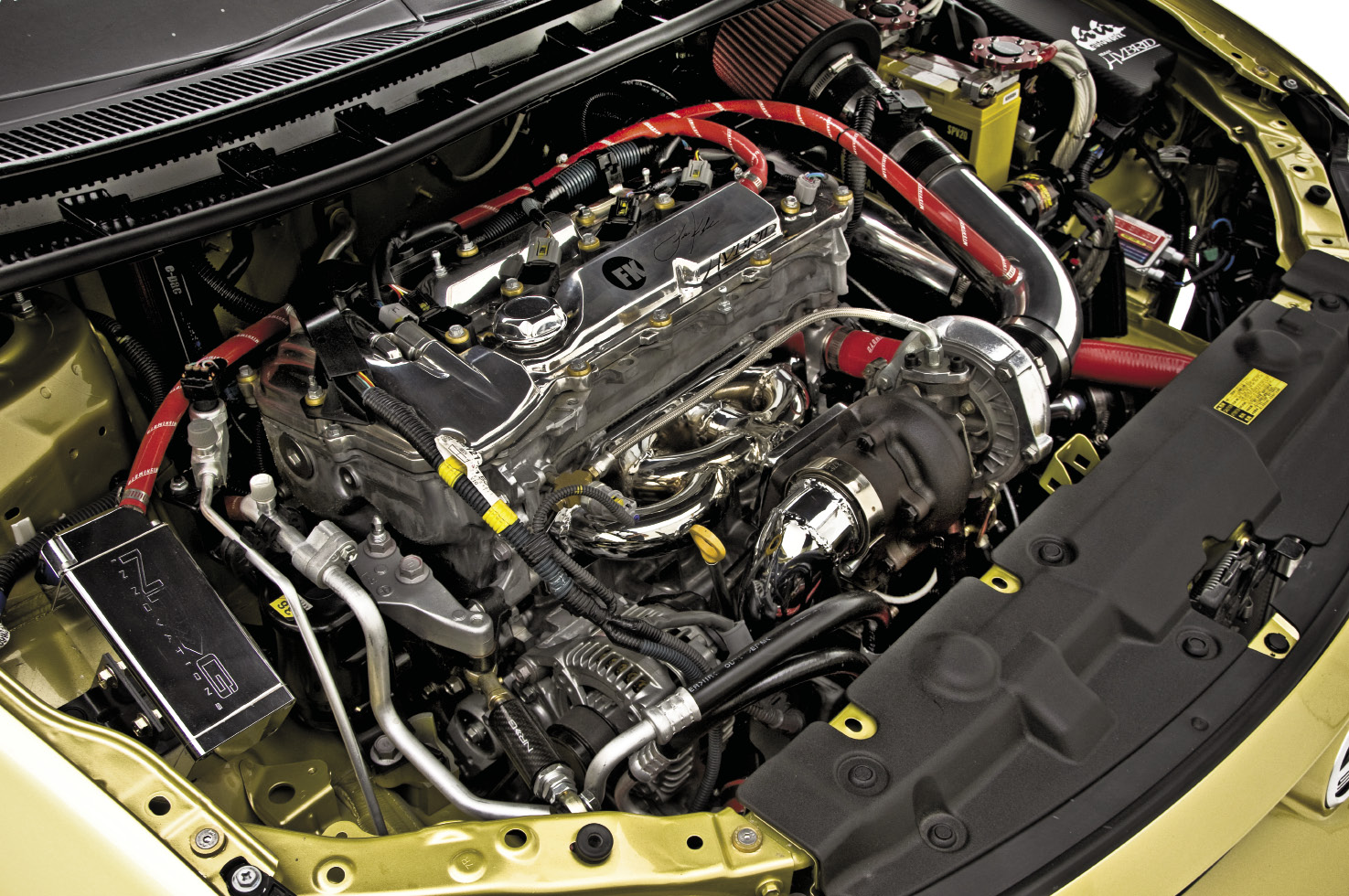 The second order of business was to pay attention to details under the hood. Lin only builds car with some jam under the lid with some bling at the same time. At the core of the build is a God Speed turbo based on the GT2876R T-28 Garrett. The custom kit, built by Project Manager, Frankie Klepadlo of Team Hybrid and AA Autoworks features all of the supporting modifications including a God Speed Type M front mount intercooler and an anodized gold blow-off valve. Lin of course added his own touches by chroming the manifold and downpipe. The air is hauled in with a DC Sports intake and the fire is fueled with Denso 550cc injectors pushed by a Walbro 255lph pump. Mishimoto stepped in for all of the cooling needs including an aluminum radiator, electric fan kit, racing thermostat and silicone hoses to connect it all up. Some NRG product was also blended in including a grounding kit, catch can and a pair of carbon fiber hood dampers. 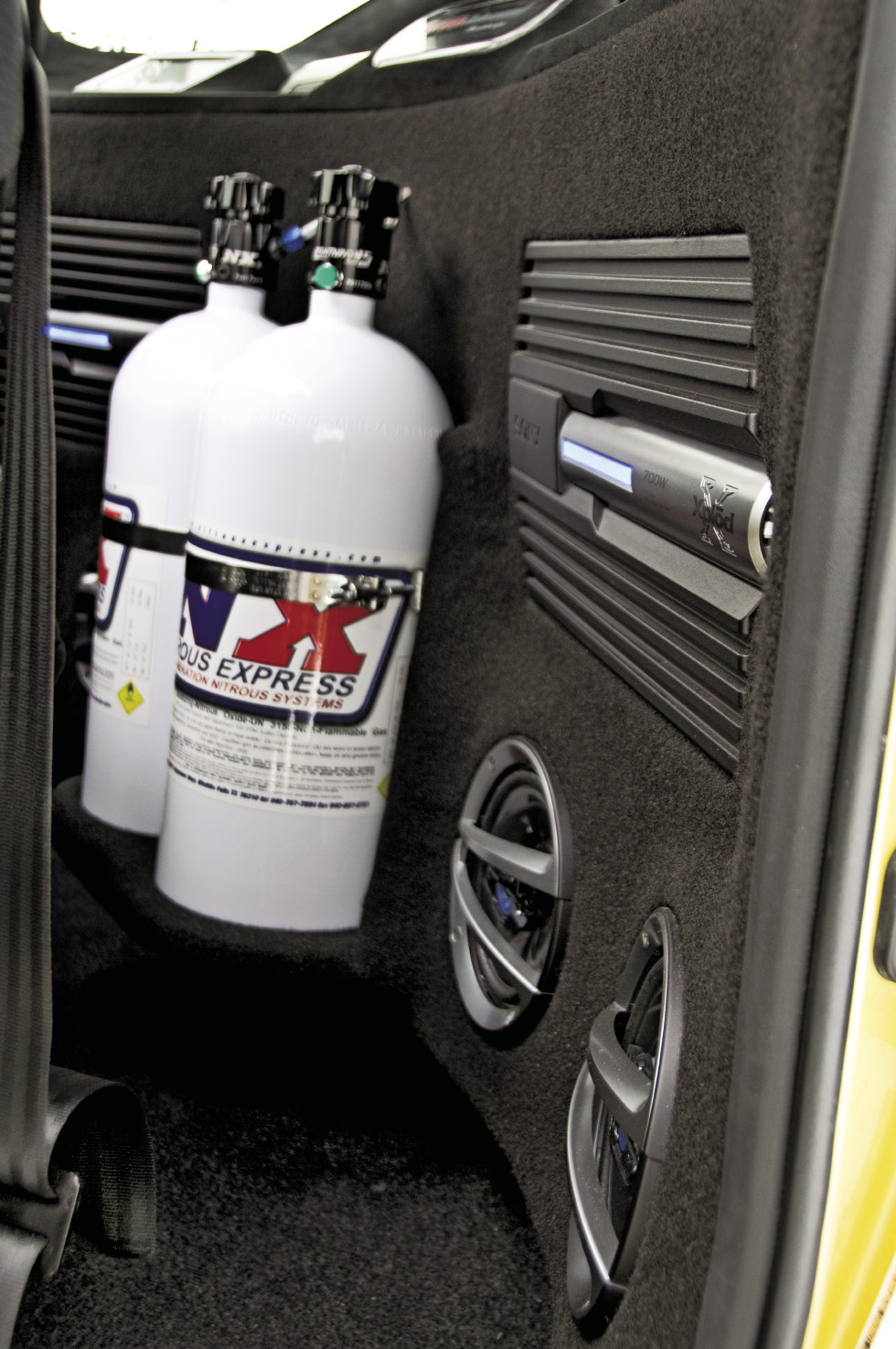 With some juice under the lid, he needed to hook it up properly and fill out those fat fenders. Lin contacted Manu at DPE Wheels for a set of custom gold finish and polished lip wheels running stupid offsets. The DPE R16 wheels are sized in 20x8.5-inch featuring -15 offset, 3.5-inch lips and BFGoodrich 225/30R20 g-Force T/A KDWs. ‘Round back, Lin runs a 20x10-inch rocking a zero offset and 4.5-inches of dish with a BFGoodrich 245/30R20 g-Force T/A KDW stretched over it. The correct stance was dialed-in using an Air Lift suspension to lay frame when needed. The kit consists a blend of proprietary and custom brackets and the AutoPilot digital lift controller on each corner with a 5-gallon tank and Viair 380C compressor. Peeking through the spokes are some binders engineered for the tC from TRD, which feature 4-piston calipers and 340mm rotor.

Inside the cabin, Lin was unrelenting in making a statement with his Scion. The factory seats were pulled in favor of Sparco Fighter seats with a pair of matching 4-point cam lock harnesses. The wheel was replaced with a Sparco 325mm suede unit matched with a NRG Gen3.0 quick release hub. The shift knob was upgraded to a Sparco Fast R along with a Sparco drift handbrake. The interior was pulled apart by Art’s Custom Upholstery and totally redone in suede and carbon fiber with a few select pieces being spraying in the color-matched gold. 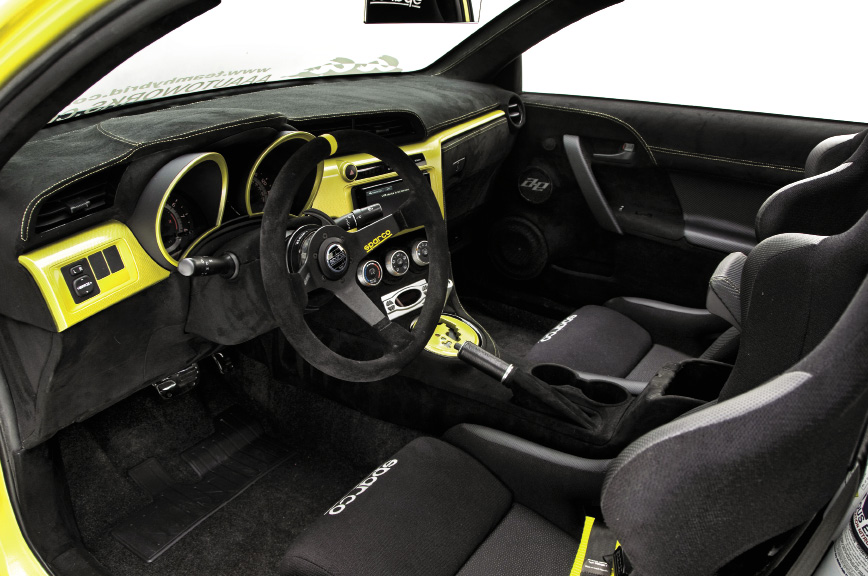 Team Hybrid and Sony had forged a long-lasting relationship that they can thank PASMAG for. When we need to connect our audio partners with the right builders, Lin was definitely on the A-list and Sony opened up their catalog for him. Lin entrusted the crew over at Al & Ed’s Auto Sound in Northridge, CA to work the magic they needed to get the car noticed at SEMA. The build started with the removal of the interior, followed by the addition of Stinger sound deadening and the installation of a Sony 7-inch double-DIN XNV-770BT receiver/navigation unit. Sony also added their back-up camera module, mobile Blu-Ray player and a DASH personal internet viewer for multimedia on the go. Video signals are relayed to a variety of monitors inside the car including a 32-inch Sony Bravia and a total of four Sony HVM-H65 6.5-inch monitors. 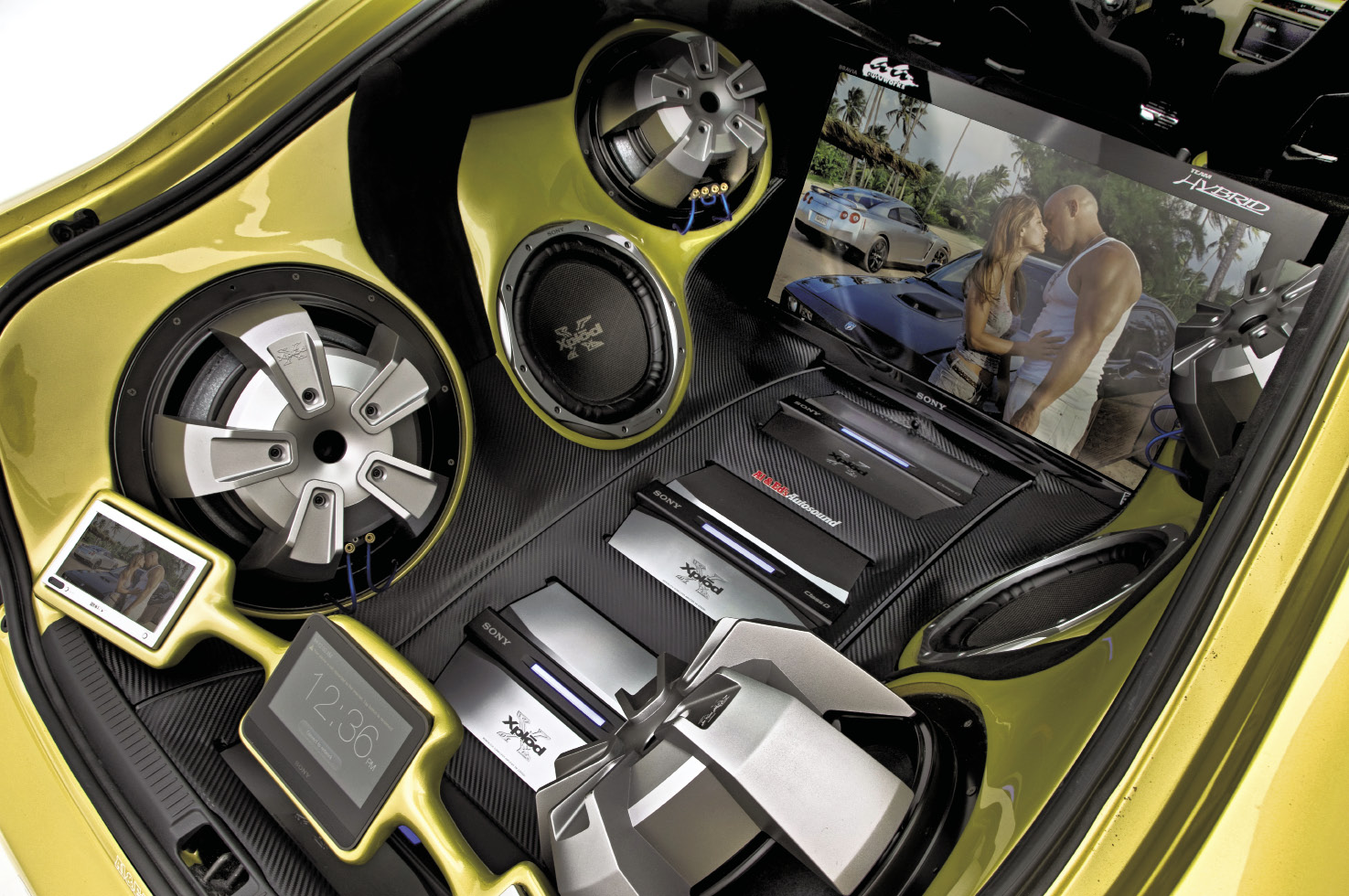 While Lin had a legitimate shot as a 3-time champion, the judges felt otherwise. For Lin, it only motivates him to push the envelope a bit more in the future. After all, he’s spent 16+ years getting his Hybrid grind on.

Read on for Full Specs