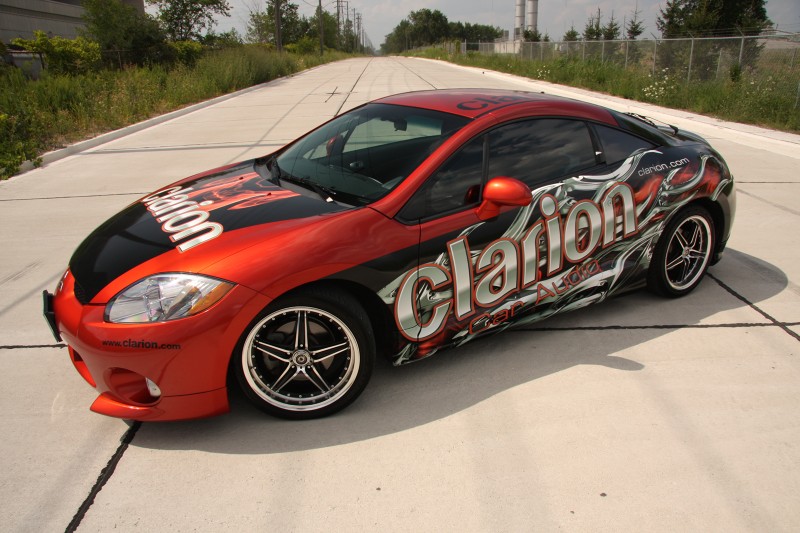 Now here’s an interesting perspective on a corporate demo car – a feature story written by one of the people who helped bring the project to fruition. As part of the Marketing Team at Clarion Canada Inc, ensuring our small fleet of demo cars is always at the ready for a dealer event or show is just part of the daily routine. But for you lucky PAS readers, you are about to be given an inside look at how this 2006 Mitsubishi Eclipse came to be what it is.

If you are a long-time reader of PAS, then you might recognize this car from a feature several years ago. Indeed – this is the same ride, but it has been given the once-over to make it new and fresh so it can go back on the road for another couple years.

The car itself is a 2006 Mitsubishi Eclipse GT, and it was originally lent to Clarion by Mitsubishi Canada. The car initially saw duty in the 2005 Targa Newfoundland rally in the hands of Mark and Lawrence Hacking. The brothers took the Grand Touring class win with this seemingly stock vehicle.

The car itself is a 2006 Mitsubishi Eclipse GT, and it was originally lent to Clarion by Mitsubishi Canada. The car initially saw duty in the 2005 Targa Newfoundland rally in the hands of Mark and Lawrence Hacking. The brothers took the Grand Touring class win with this seemingly stock vehicle. How did Clarion get their hands on the Eclipse? Once you have raced a car, you just can’t sell it to a consumer, so the car sat at their head office in Mississauga for many months before being sent to Clarion for its initial transformation from race car to demo vehicle.

The original installation was performed by Brad Wisnoski, Patrick Lavallee and I at Driveway Sounds in Burlington. In case you haven’t figured it out, that was, at the time, the Marketing Team for Clarion Canada. Some of that installation remains in the car. The custom iPod mount in the center console is home to a 5th Generation iPod Video. It connects to a Clarion NX700 DVD Navigation receiver that found a home in a modified aftermarket dash kit. The radio trim piece of the dash kit was glued in place, then the entire trim piece was smoothed and painted to match the door handles and shifter trim. The result is a subtle and seamless 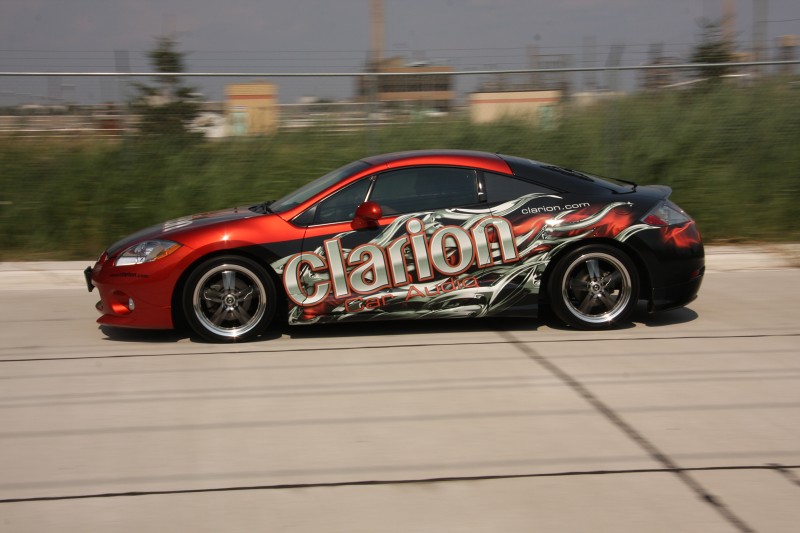 The original installation was wired with Streetwires Ultra Flow cabling. Ensuring maximum power delivery means using large conductors, so 0 AWG wire was run from the front of the car rearward. Likewise, 5 runs of Ultra Cable 12 Awg speaker cable make their way rearward from the dash and doors. In the doors are a set of Clarion SRP6920M component 6x9 speakers. These feature a 1-inch soft dome tweeter and both the mid and tweeter have their own run of cable to the rear of the car.

The factory dash pod of the Eclipse was removed and modified to house an SRR1685 6.5” coaxial speaker. The speaker was upgraded with an external crossover network from an SRS1686 component set to better handle the power being sent to it. The new dash pod was wrapped in grey vinyl which was, along with the speaker grill, dyed to match the factory dash colour.

The original installation had five 10-inch subs mounted upside down in the spare tire well and 3 amplifiers on a custom rack in the rear seat to power it all. 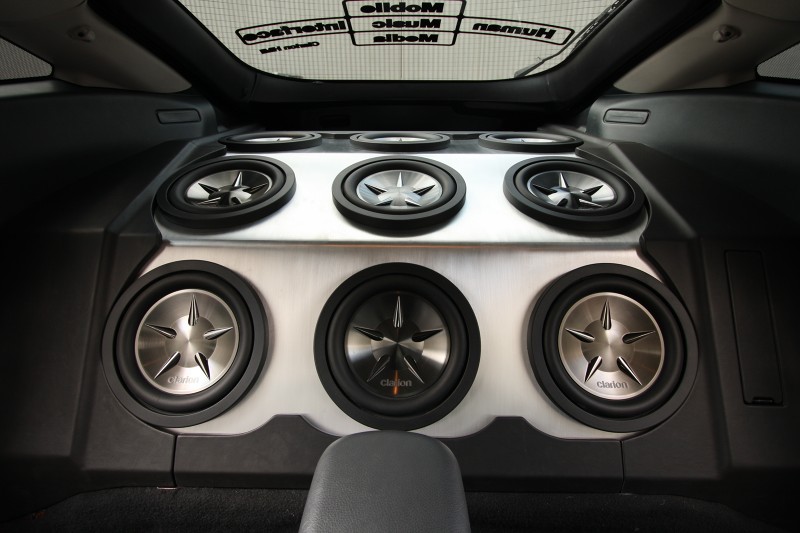 But knowing the true intent of the Eclipse was to give onlookers and listeners a memorable experience, it was decided that this reincarnation was going to be a bit more extreme.

With our extremely busy schedule, and the fact we have already built another demo car four Quebec this year, the Marketing team just didn’t have the time to do the new installation ourselves. The decision was quickly made to take the car to Matthew Gordash and Dwayne Virag at Defined Designs. Being a friend of Gordash and having travelled to events like the dB Drag World Finals and Spring Break Nationals with him, I knew his talent and capabilities was an easy match for our needs. The skill set and experience of these two ex-Mobile Dynamics and Concepts on Wheels employees is hard to match.

The design process for the new installation was simple – order up 5 amplifiers and 9 subwoofers and dump them in the back of the car, along with a couple Kinetik HC1400 Power Cells and a power supply, and drop the whole thing off. Yep, truly, that was the whole thing. We arrived with the car and simply showed Gordash and Virag the installation we had just completed in our Outlander to give them a sense of our style, and then let them loose on the project.

Over the next month, Gordash called with one or two questions about our preference for subwoofer enclosure style and a few odds and ends. We even managed to get a few ‘in progress’ pictures of the car with the subwoofer enclosure built during that time. However, we really didn’t have clear picture of what the two were building until we picked it up. 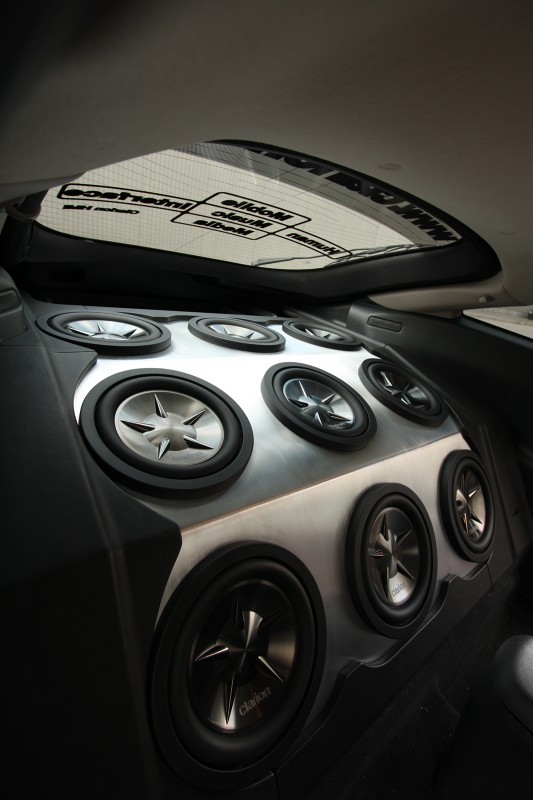 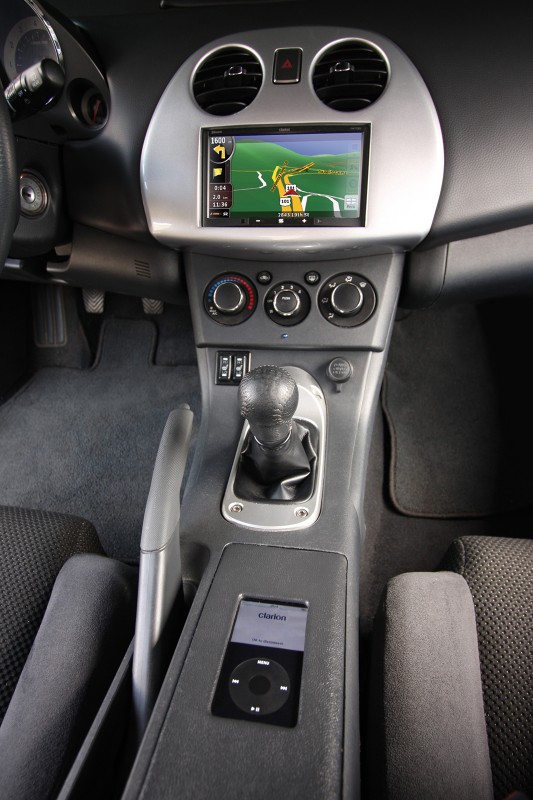 As you can see from the pictures, the new installation is awe-inspiring in every way, while retaining some of the factory integration cues that we are fond of. In the rear of the vehicle are five amplifiers. Powering the front stage are two Clarion XH5410 four channel amplifiers. These amplifiers flank three Clarion 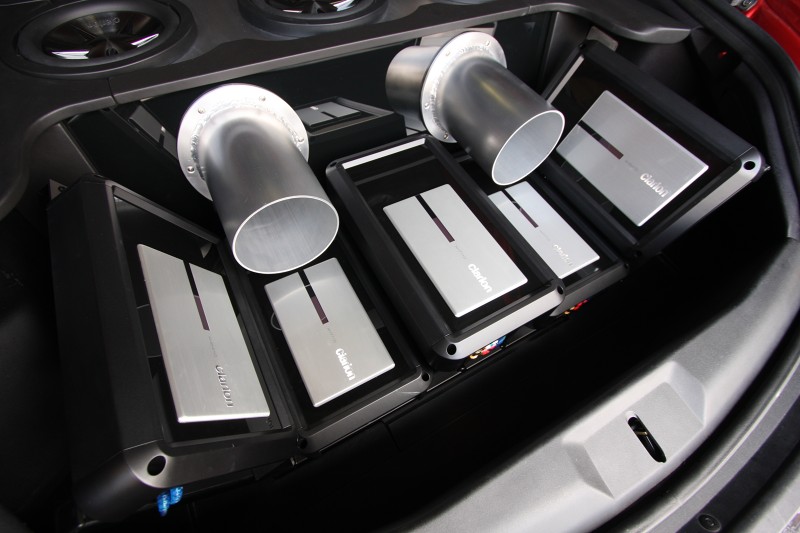 XH7110 850W monoblock amplifiers that power the subs. Virag built the custom amp rack out of 1-inch square steel tubing and welded it together. The elevated center amp and angled side amps were done out of necessity, as landscape was at a premium. They also happen to look awesome like that!

Under the amps, in the factory spare tire well are the two Kinetik power cells and the power supply. The supply was installed so that any member of the Clarion sales team can roll up to an event, pop open a small water resistant box under the car and plug it in to a 120V outlet to let the car play for hours and hours. The 2010 Importfest show was the cars first big public outing, and we are able to crank it all day without any problem.

A large 7 cubic foot vented subwoofer enclosure now resides where the rear seats once were. Three rows of Clarion PXW1052 subwoofers ensure that there will never be any problem hearing the bass line in any track. Each trio of subwoofers is fed by one of the XH7110 amplifiers, and the amplifiers are daisy chained together so only a single audio connection needed to come from the front. The top of the enclosure is covered with a 1/8” thick piece of aluminum that was bent to follow the contour of the top of the enclosure. Vinyl trim panels extend out to the sides of the car and give it a seamless look.

Emanating from the rear of the subwoofer enclosure are two large aluminum vents. These were cut and mounted so that they look like monster exhaust 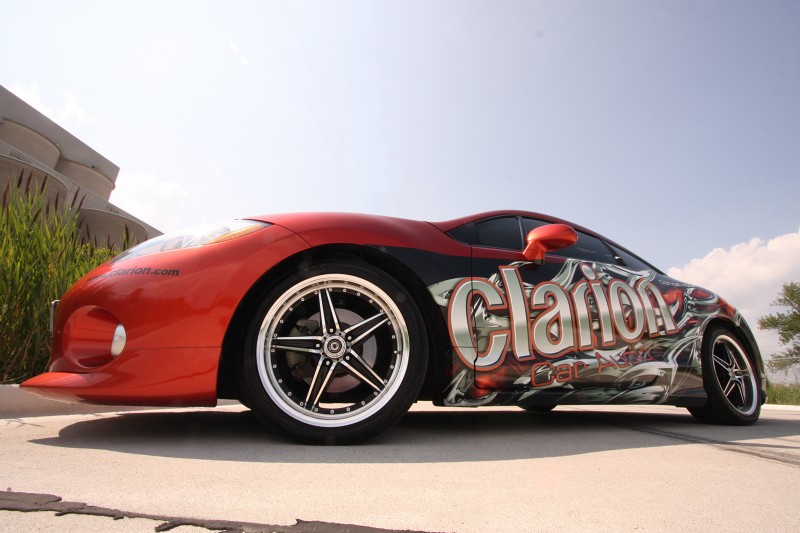 pipes. You will have to trust us when we say that these are for much more than just looks – the amount of bass – really deep bass that this car produces verges on the uncomfortable level.

With the system installation done, the next step was to give the car a new look. Andrew Davison (Clarion’s Graphic Designer) and I took on the task of removing the hundred or so small Clarion stickers that previously adorned the rear half of the Eclipse in preparation for a vinyl wrap. We had Steve Sidoriak at Thid Media design the graphic with some input from us in terms of theme and location. The graphic was then installed by AV Graphix here at our office. Davison and I went over the rest of the car and clay-barred it and gave it and the 18” Konig Sideways wheels a good polishing to rejuvenate everything else.

Having had the chance to take the car on the road a couple times, I can tell you, the effect the  wrap has on bystanders  is nothing short of amazing and it turns heads everywhere it goes. If you ever see the Eclipse on the road, it is well worth the effort to follow it to its next destination and ask for a demonstration. We can guarantee that the experience is one that you won’t soon forget – just be prepared to be scared – it almost hurts!

With New Direction, Clarion Marine Relaunches in the U.S. Retail Market
MIRAMAR, Flor., – July 1, 2020 - Clarion Marine is positioned to make 2020 a breakout year by returning to the retail marine audio channel, under the...

PASMAG #154
START YOUR ENGINES The snow has finally cleared from streets across North America, and car enthusiasts are emerging from their hibernation. It...