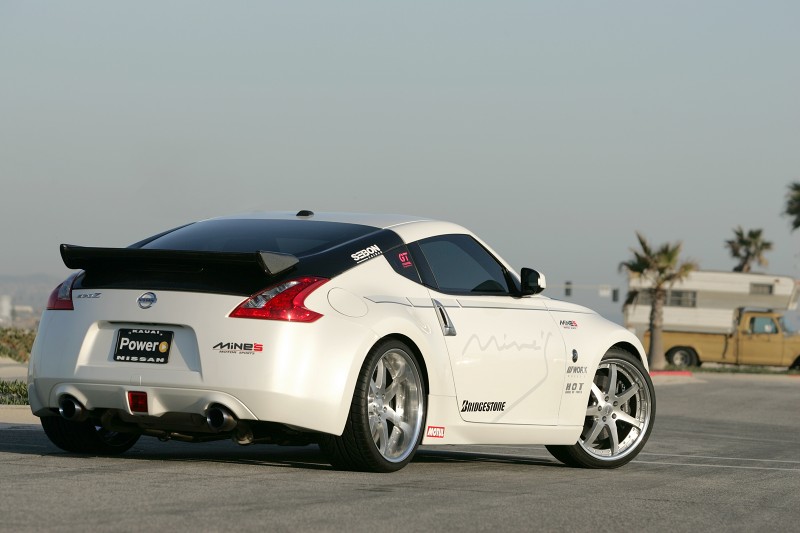 Defending a title or your reputation is never easy. Enthusiasts wondered what Nissan could possibly do to with the 370Z in the shadow of the now-legendary 350Z. Not to mention, the struggle to get any press coverage for the car following the media onslaught of the GT-R. While both of these factors made it hard for the new car to get noticed when it was merely gossip and spy photos, now that the 370Z has arrived (on the Z34 chassis), everyone knows that the new car will easily defend its honor.

As predicted, Mine’s was at the forefront of bringing cutting-edge technology to the Z.

The redesigned chassis offers a welcome change. It is light, wider, shorter and features new technology the automotive world has never seen before. Innovations like the cast one-piece rear sub-frame and the highly-touted Synchro Rev-Match for the 6-speed box. The driving experience out of the box was one of the highlights for our reviews in 2009 and we were eager to see what the Japanese would do with the car.

The Japanese has a huge jump on the rest of the world considering we saw modified versions of it months before it was even in North America. As predicted, Mine’s was at the forefront of bringing cutting-edge technology to the Z. Mine’s has a long-standing relationship with Nissan and they have access to pre-production cars and are rumored to work with Nissan engineers to share data. With this type of foothold 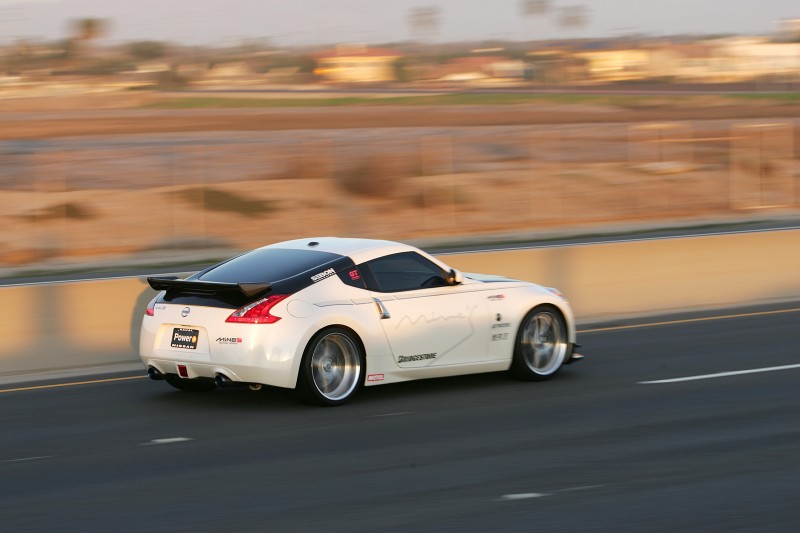 with the Z34, it was a sure bet that Mine’s would release a highly tuned, yet refined automobile.

We caught up with Jason Kusagaya from Mine’s USA and his US-Spec 370Z. The car was delivered with the Touring Package and the highly recommended Sport Package, which includes bigger brakes, Rev-Match and forged 19-inch RAYS Wheels. With all of the development already done, Mine’s installed parts to crank more from the 332hp V6. They started with a set of Mine’s VX air filters and Mine’s high flow throttle bodies to open up the air passageways. To dump the fumes, they installed a set of Mine’s down pipes, high-flow cats and a Mine’s Silence VX-Pro Titanium Titan II exhaust system. Quiet at idle and low revs, the Mine’s exhaust belts out its musical battle cry when provoked. Finally a Mine’s VX-ROM ECU was added to make all of the new parts play nice and to tweak the maps for maximum power. Despite the new found power, the new Z oil temps are through the roof, so Kusagaya installed a GReddy oil cooler kit to counteract the problem.

The attention was then focused on the suspension where the 370Z already excels. A set of Mine’s - Öhlins Esta CoilOvers with Hyperco high rate springs were installed. The upgraded ride is taut yet balanced for both street and track. The braking also got a shot in the arm with the addition of Mine’s own Winmax Performance Brake Pads and SS lines. The rolling gear, of course, needed some help because a Mine’s car can’t be seen rolling on teenage rims! They decided on a set of Work Gnosis GS-3 wheels 20x9.5-inch and 20x10.5-inch with the tire pressure monitoring system intact. The tires selected were the capable Bridgestone Potenza RE050A, running a 255/30R30 in the front with a 305/25R20 rear.

Read on for Full Specs

5 Of The Coolest New Wheels from Mackin Industries
Mackin Industries, the name behind iconic monikers like RAYS Wheels, Yokohama ADVAN, and many more, has been a busy brand this year. They've been...

RAYS Versus VV21SX
The VERSUS VV21SX crossover wheel works well both on and off-road and is the perfect match for an era without boundaries. This time, we are debuting a...

RAYS HOMURA 2x5RA
Homura, renowned for its ubiquitous high-quality cross-spoke wheels introduces a new proposal, the RA Series. Following in the footsteps of the ground...

RAYS GramLIGHTS 57DR
As the standard 57D, the 57DR is available in more size applications dedicated to the overseas market. The semi-gloss black color is simple yet...