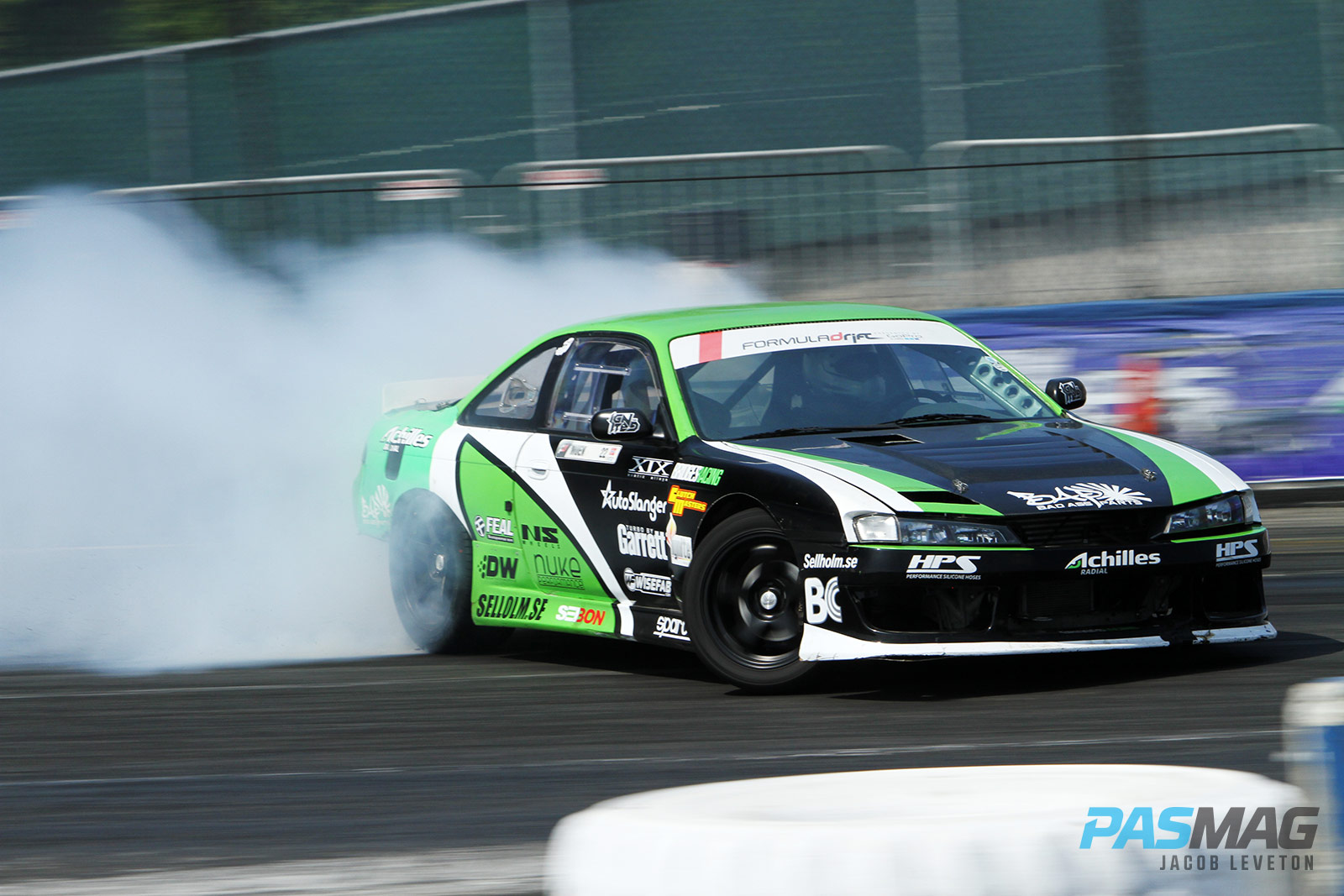 Since his entry into Formula Drift in 2011, “Fast” Kenny Moen has been good, but his old drift chassis kept him from being great. Driving the exact same Nissan 350Z chassis that took Tanner Foust to a pair of back-to-back championships, the car just wasn’t as competitive as when it was originally built. Despite being underpowered and under-engineered compared to the state-of-the-art drifters that started to enter the series over the last few years, Moen earned a trio of top-eight finishes and was a driver that even the top competitors in the sport hated to see on their side of the bracket. 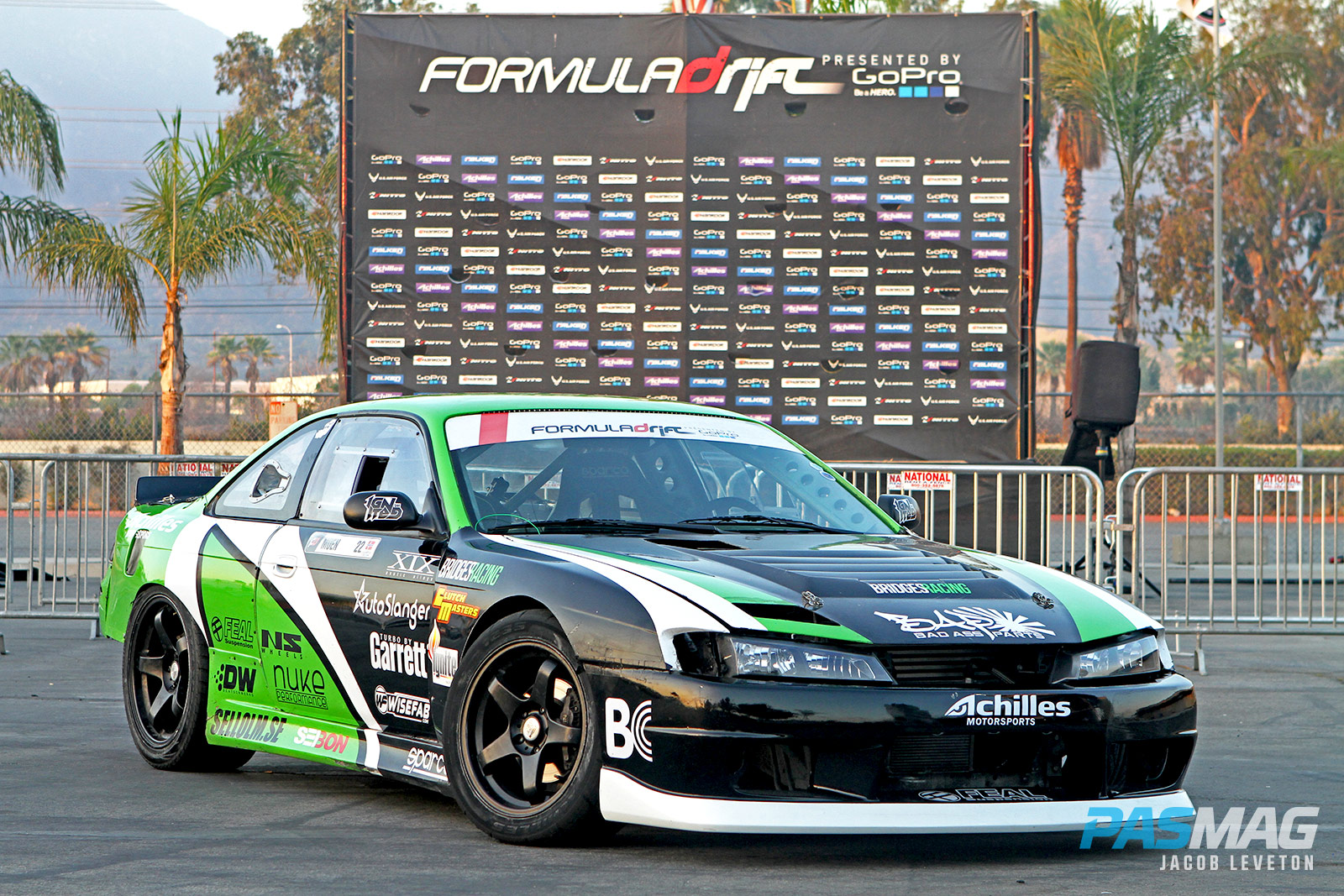 Entering the 2014 season, Moen got connected with the same Bridges Racing team that won the championship in 2012 with Daigo Saito and a plan was hatched to build a newer, more competitive car. 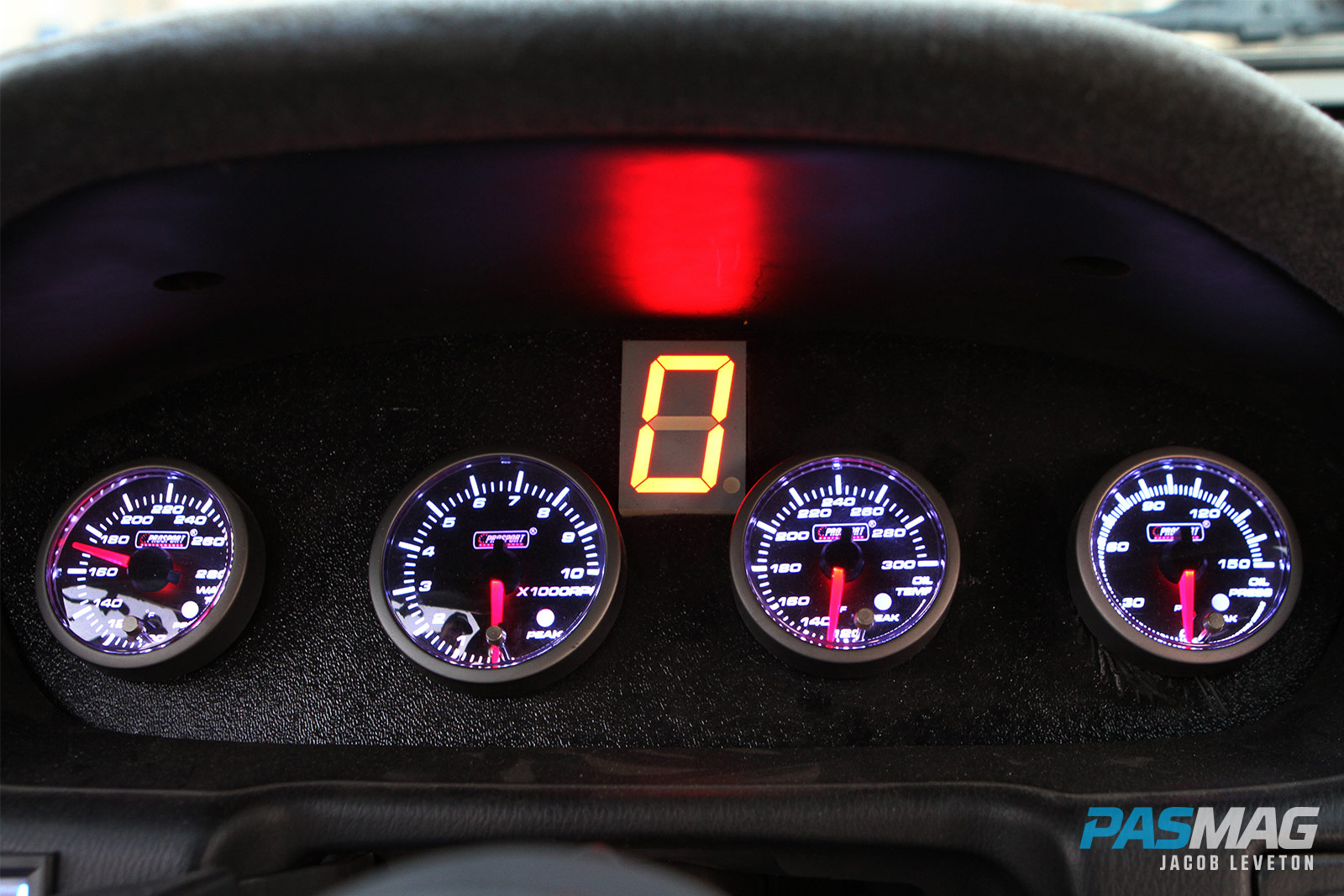 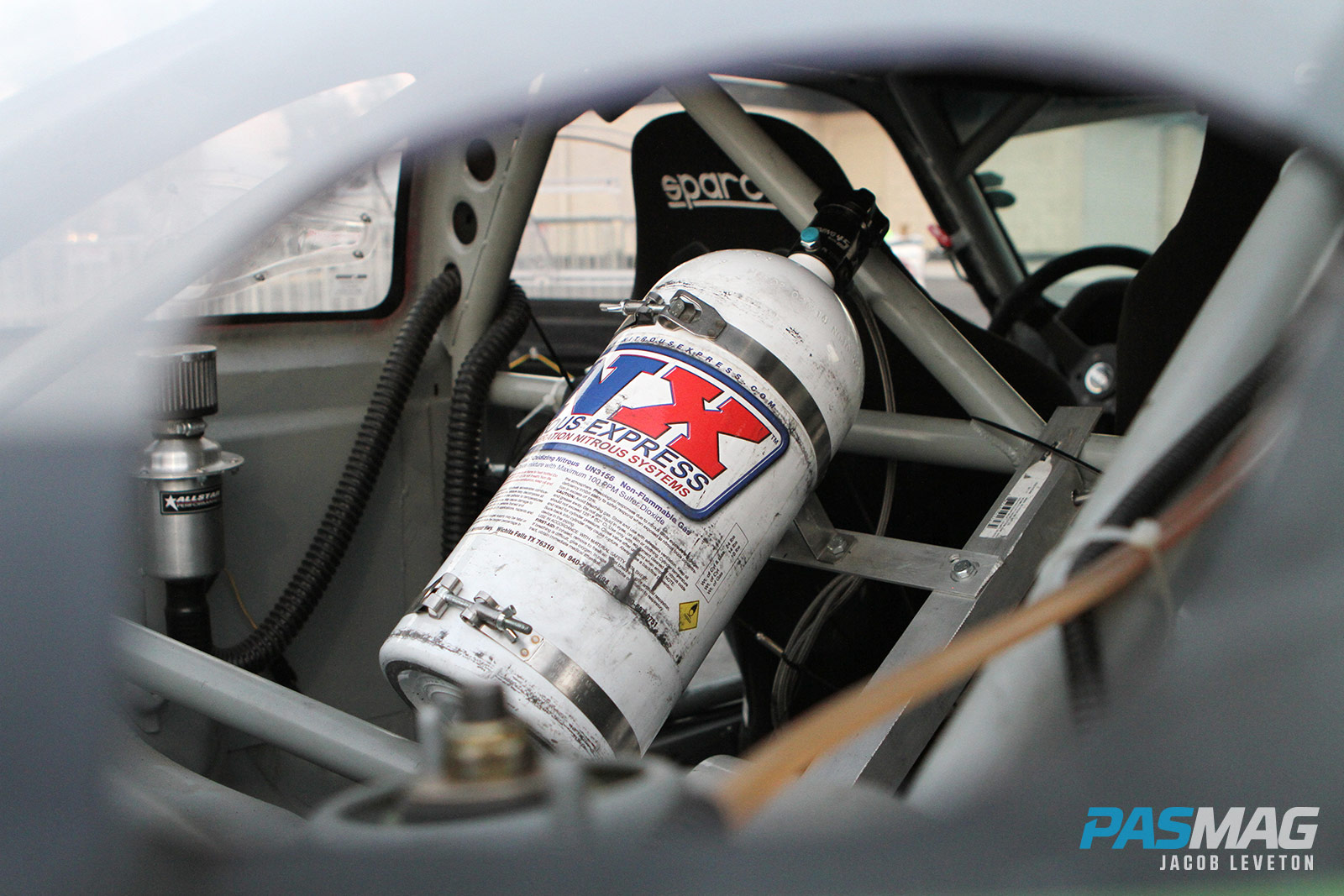 The machine you see here was built by Faruk Kugay and his team at Limitless Motorsports in Northern California. A clean S14 chassis was sourced as a starting point, and the build started shortly after the end of the 2013 season. Kugay and his team got to work, stripping the car down and fitting the roll cage, including door intrusion bars. The interior was gutted to the extent that only a pair of Sparco Corsa seats, Sparco five-point harnesses and a gutted stock dash was flocked to reduce glare remain. A set of Prosport gauges sit where the original gauge cluster sat, with a small LED screen that shows which gear the transmission is currently in. The gear indicator is important, as the Sellholm sequential transmission doesn’t use the traditional H-pattern. A hydraulic e-brake handle sits close to the shifter, but otherwise, the majority of the interior is clean and stripped. 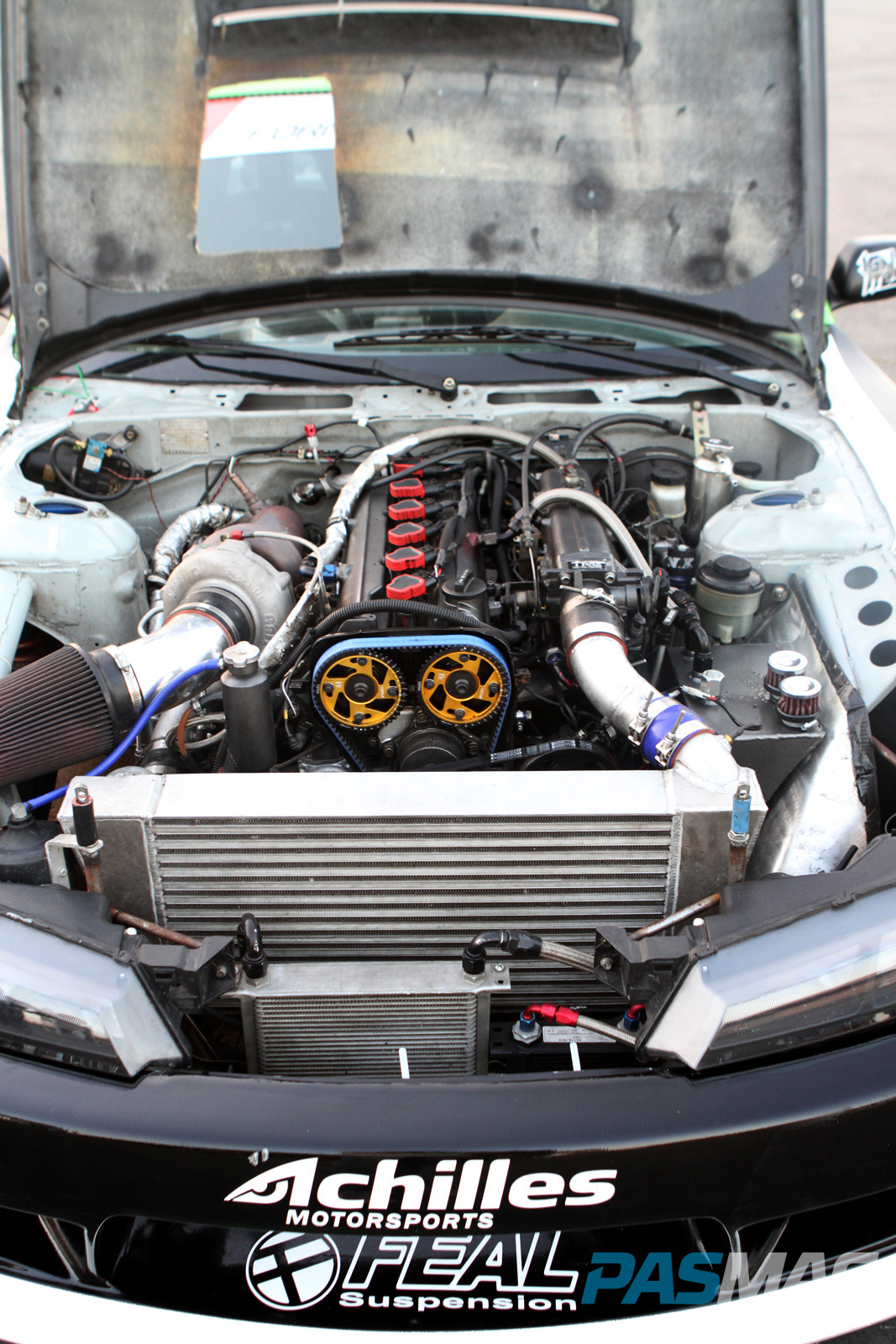 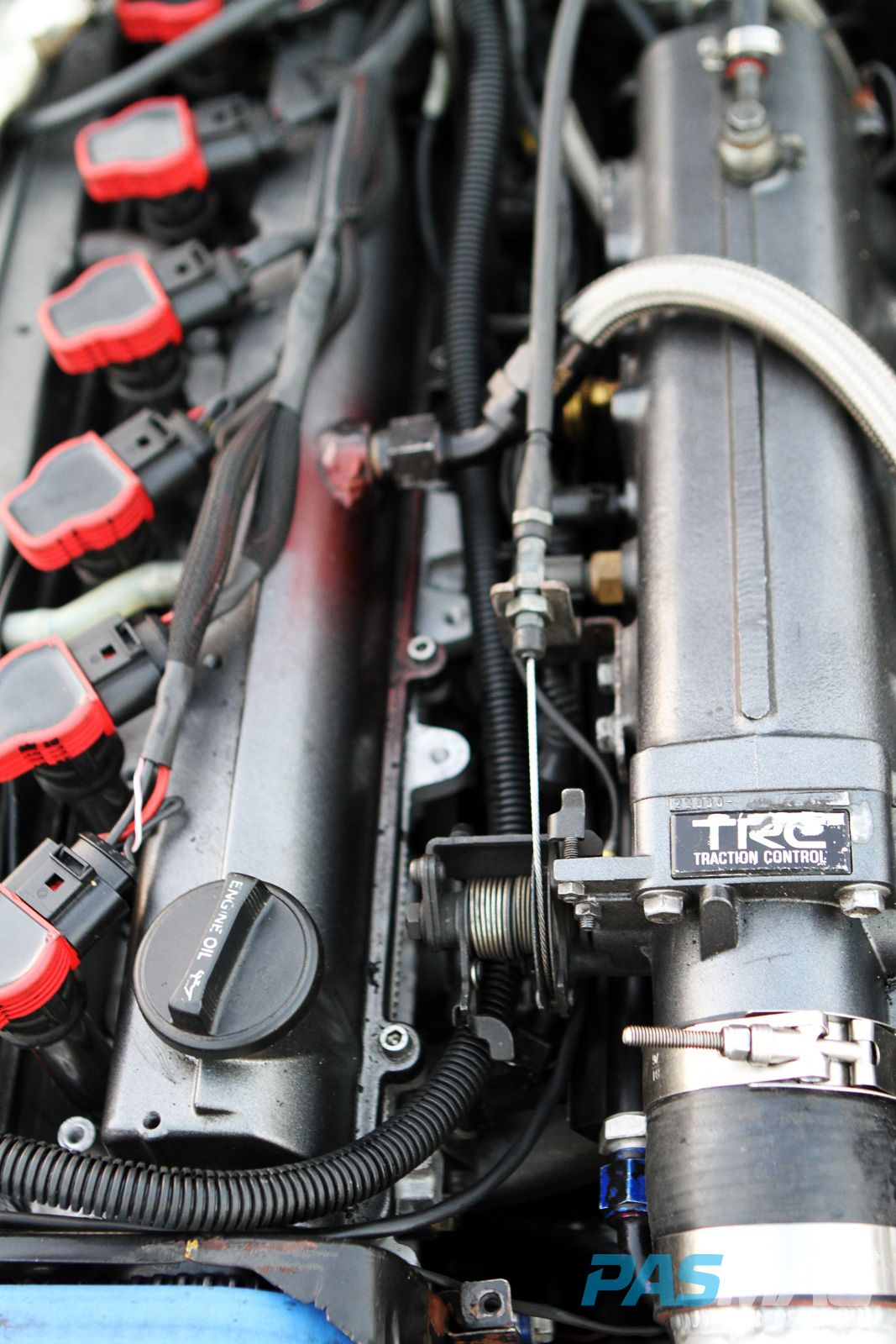 This car is vastly different from your average S14 under the hood. With the power wars in full swing, Kugay and Moen decided to utilize the 2JZGTE engine out of the Toyota Supra instead of any Nissan or Chevrolet V8 options. Moen has owned several Supras previously, and is familiar with the powerband and associated horsepower it delivers. 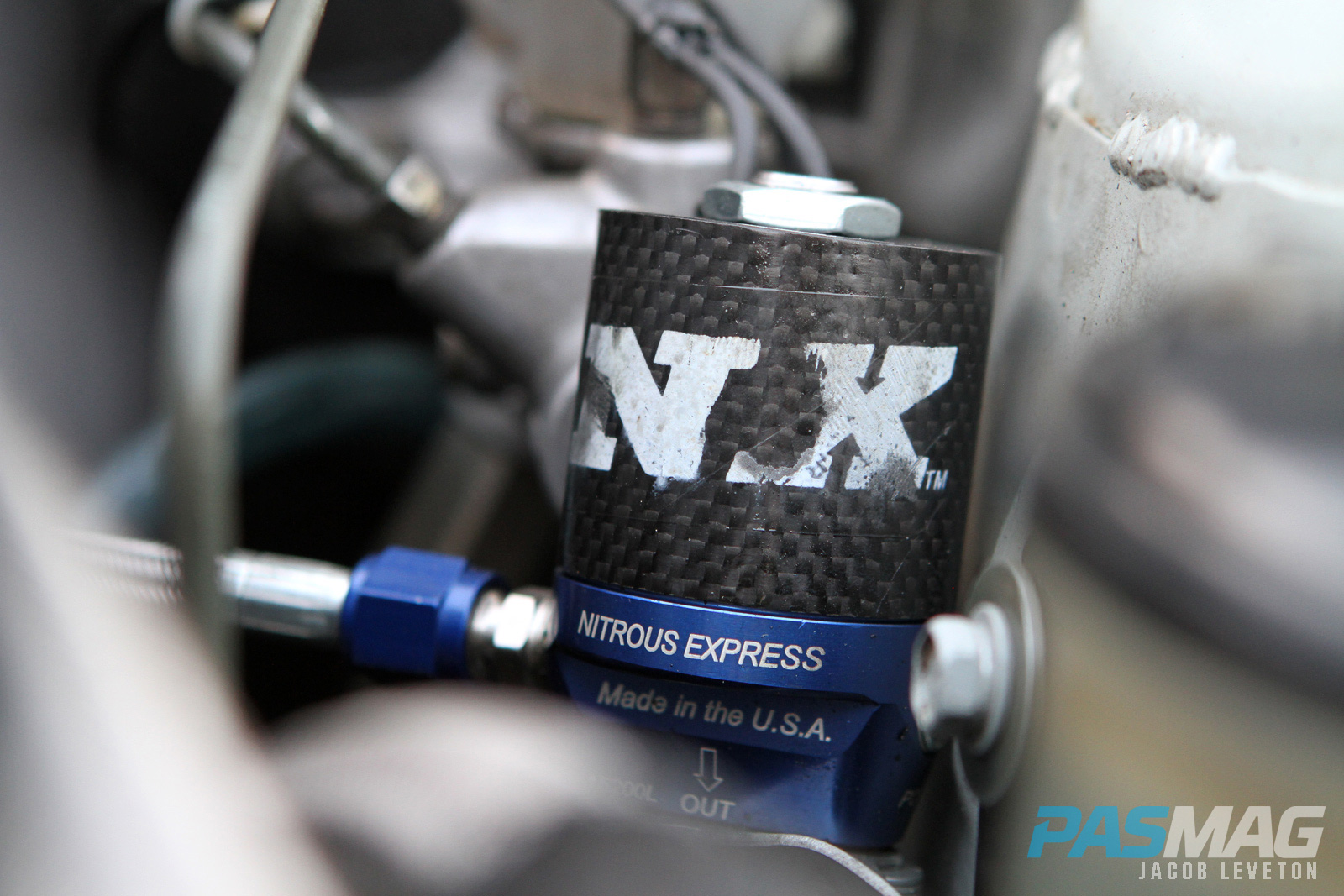 Before the engine was dropped in, a set of CP pistons and Eagle connecting rods were used to freshen the bottom end, while ARP studs paired the block with the head. Brian Crower cams and cam gears handle the intake and exhaust valves. The OEM intake manifold, throttle body and gaskets do a great job showing just how advanced the 2JZ was when it was introduced in the early ’90s. 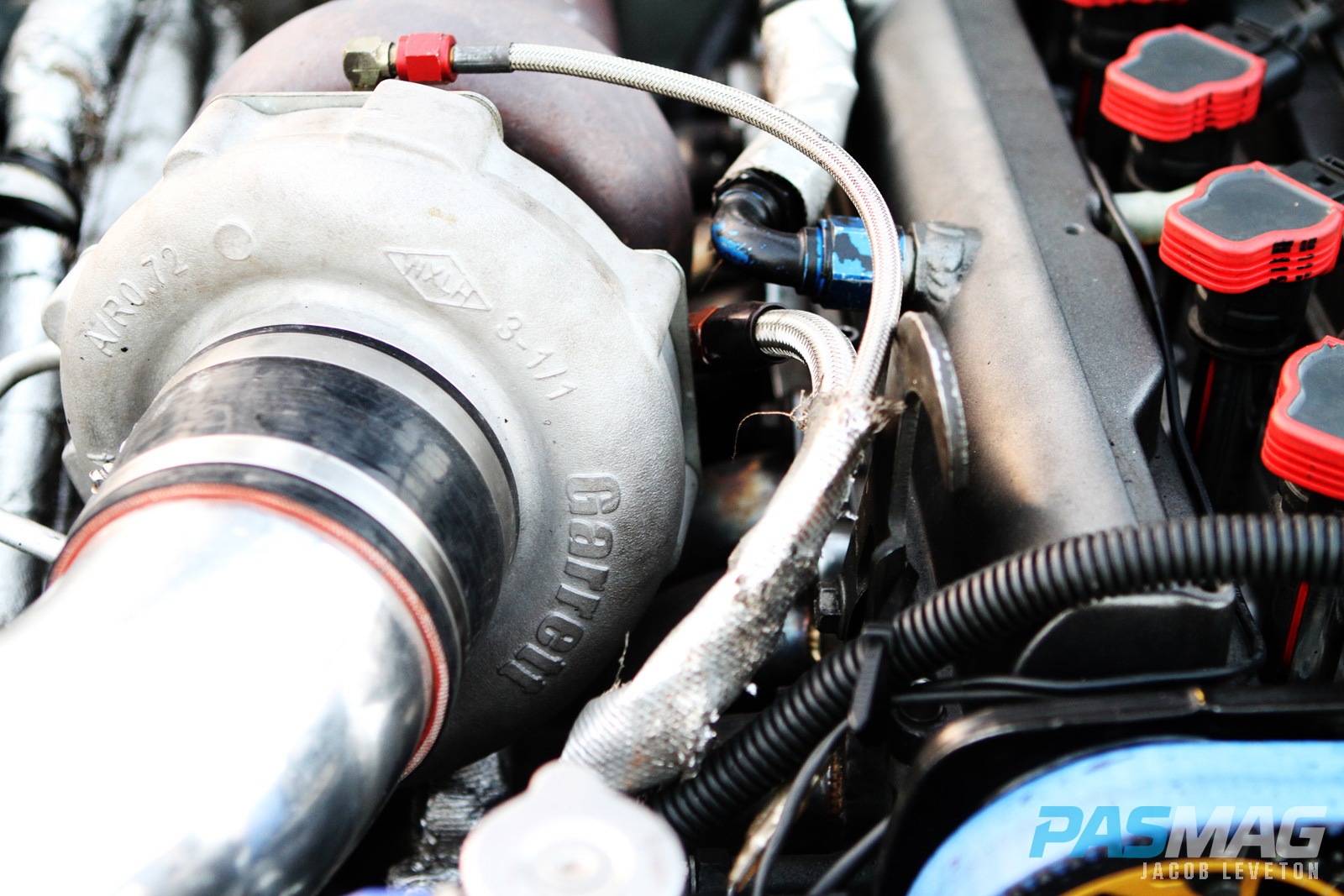 Fuel is provided via a Deatschwerks DW300 X3 fuel pump and a slew of Nuke Performance parts, including the fuel rail, fuel pressure regulator, surge tank, and fuel filter. Boost is handled by a Garrett GTX40 turbocharger and Tial 44 mm wastegate, which helps make nearly 750 horsepower from the motor. That power is pushed through a Clutchmasters clutch and flywheel to a welded BMW 210 differential. 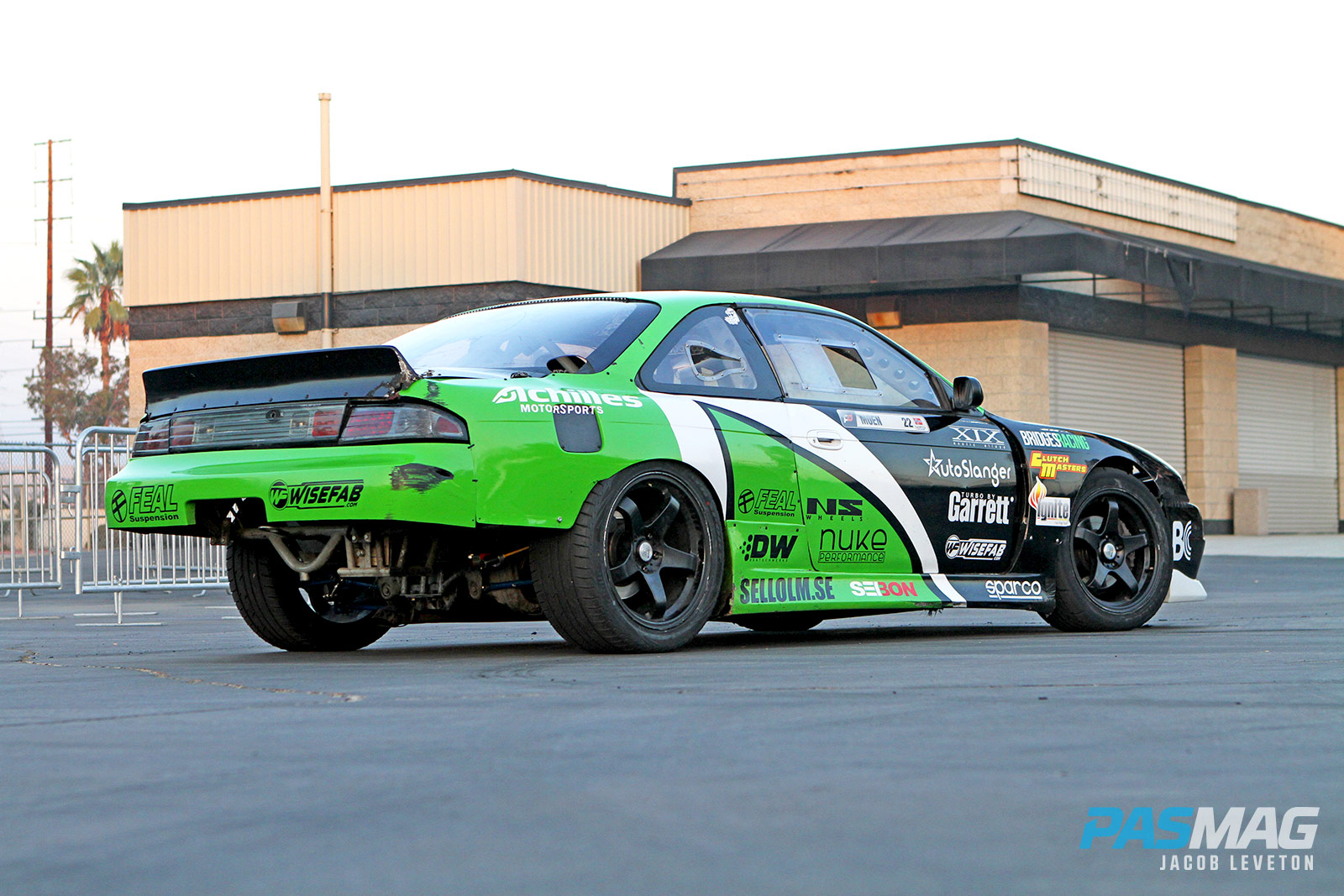 The suspension plays an equal part in getting power to the ground, and to this end, Moen teamed up with fellow Formula D driver Odi Bakchis’s company, Feal Suspension, to help with the setup. Each corner is held up by a set of Feal’s trademark 441 coilovers with custom valving and custom Swift springs.

All steering arms have been replaced with Wisefab parts to provide over 60 degrees of steering angle at full lock. OEM Nissan Skyline calipers provide the stopping power in the front and rear with stainless steel brake lines to help prevent brake fade. Traction is directed through the NS Wheels M01 wheels, wrapped with Achilles 123s or ATR Sport 2 tires, depending on the track. Surprisingly, Moen doesn’t run any sway bars because he prefers the car to be softer. Several drivers have said that Moen is one of the faster guys on the grid, especially given the horsepower, so the suspension setup seems to have worked out in his favor. 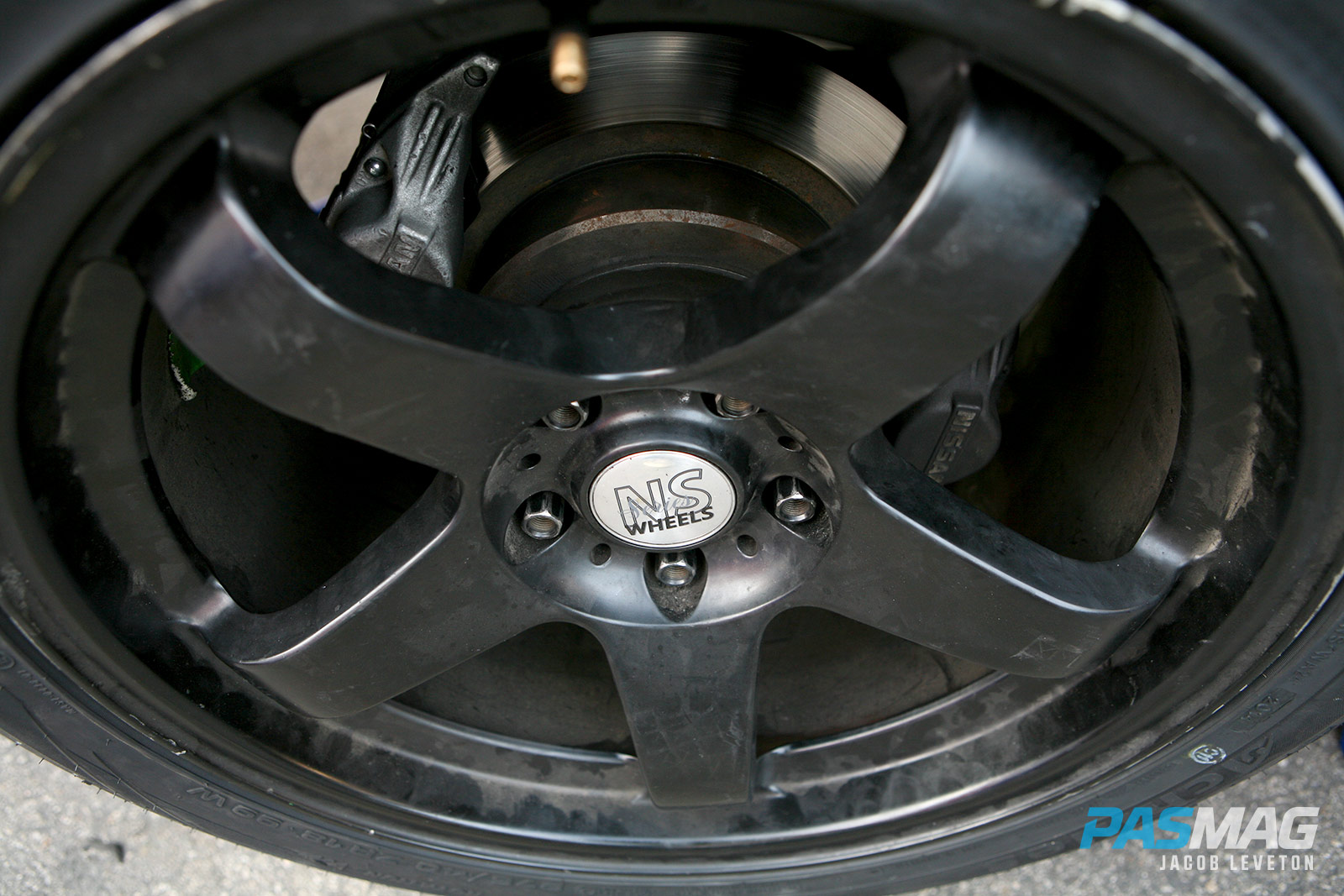 The body kit is a mish-mash of different manufacturers, all sourced from BadAssParts. Up front is an ings bumper with modified BN Sports fenders and a Seibon carbon hood. The side skirts are also from ings, with Get Nuts Labs rear overfenders and a chopped OEM bumper to round out the rear. If you recognize the rear spoiler as a Rocket Bunny, you’ve clearly noticed the Japanese brand seems to be on every car this year. Moen asked Magnus Bekkengen to design the Achilles Radial livery, and then Moen did the bodywork and paint himself as he paints cars for a living in his native Norway. 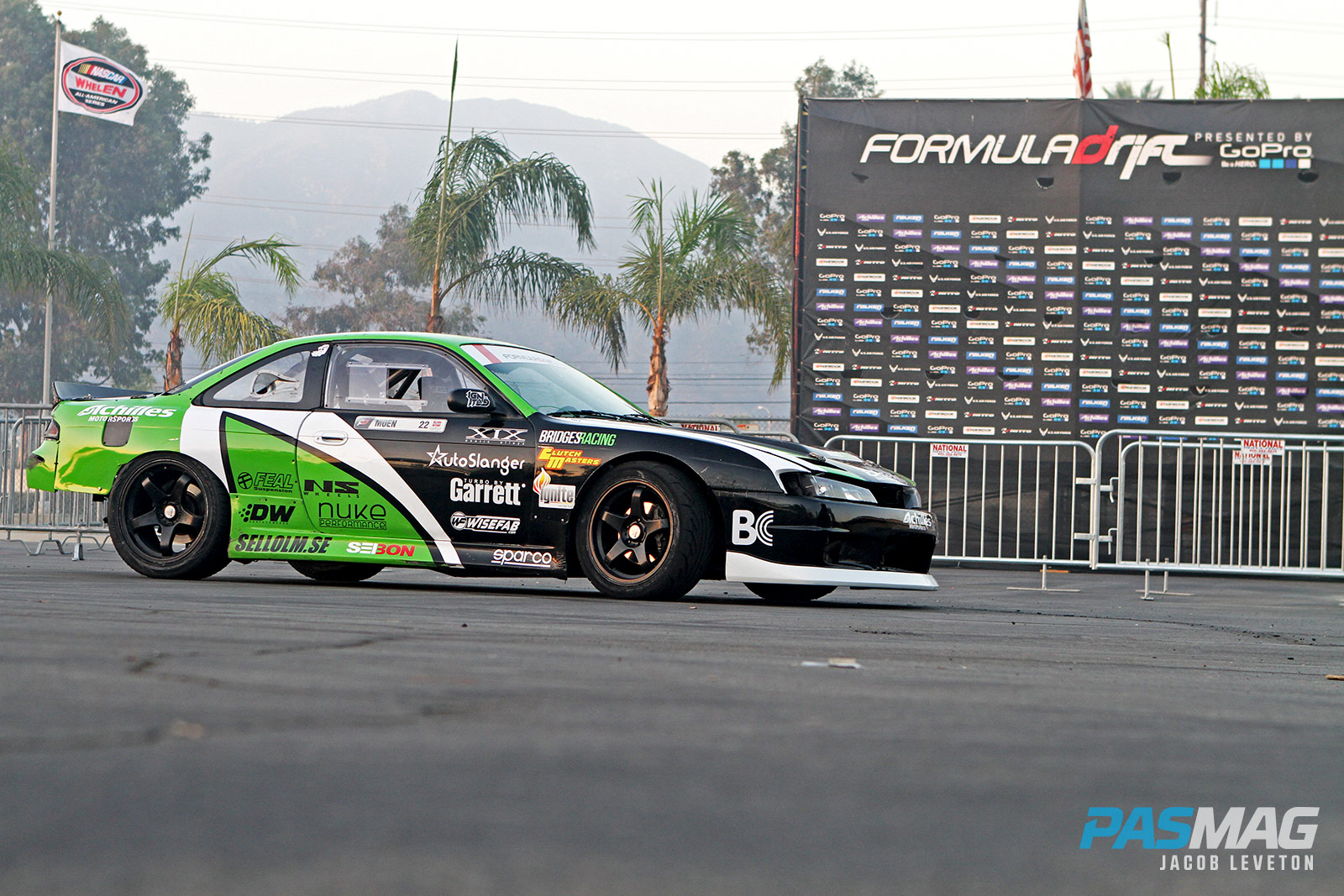 The 2014 season was a career-best for Moen – it began with his first-ever Formula D podium in Long Beach, and saw a second top-four finish in Miami just two events later. Unfortunately, the second half of the season was a bit rougher on Moen and his team, but he managed to finish the season strong in sixth place. His plans for 2015 are well underway, and we’ve heard the car will be similar, save for a few reliability upgrades. Considering his great results in 2014, it's not such a bad idea. 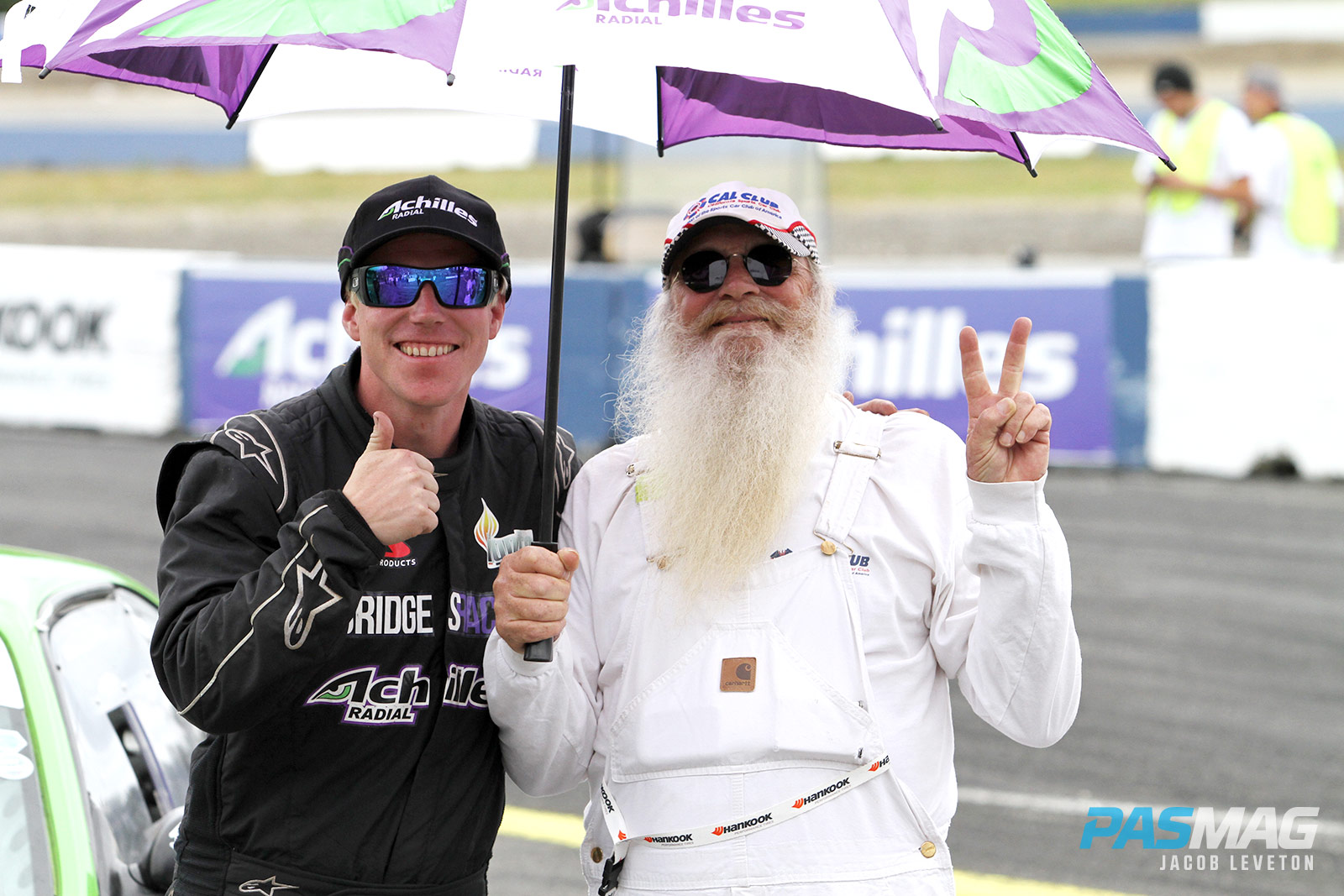 IRL: @builtbyjoe's Nissan S14.5
We can't get enough of this build! Dress Up Bolts featured this project build on their page a few weeks ago and they also finally got the opportunity...

PASMAG Garage: Jim Goritsas of RbPower Garage
RbPower Garage in Bradenton, Florida not only specializes in all-things RB-powered and Nissan, they also provide services from air-ride and fender...

FDF Fab Angle Kit + Breakdown Vids
The local homies at FDF Race Shop have been making super cool suspension parts for a while now, including their increasingly popular angle kits for...