Dedicated fans of the classic Phoenix Gold products are the type of users that have come to expect high performance, top quality and innovative technology. And while the Phoenix Gold Ti2 Series of subwoofers may be styled to bring back memories of the Titanium Series woofers that were so popular in the 90’s, the technology employed these days is definitely 21st century stuff. Just like the new Mustang, Camaro, and Challenger, old school looks with modern day performance is where it’s at. With an Efficiency Bandwidth Product (EBP) of 43.78, the Ti212d4 is suitable for either sealed or vented enclosures and maximum application flexibility.

Utilizing modern technology like co-injected polypropylene cones, titanium/aluminum alloy voice coil formers, and computer designed motor structures, the Ti2 Series of subwoofers may look like they’re from the 1990’s, but the tech is all 2011!

The Ti2 woofer is designed for demanding applications and competition style installations. It’s meant to handle high power, and has been specifically designed to maximize excursion and output. The woofers are built around a strong yet lightweight die cast aluminum basket, which incorporates six strategically placed cooling vents to help  dissipate heat build-up, ensure high power handling, and long life. The basket is finished in a crinkle black powder coat, and the 90 ounce motor is trimmed with a molded black rubber boot that matches the design of the basket.

The motor itself uses a vented and bumped backplate to further assist in voice coil cooling, as well as to accommodate high excursion levels without allowing bottoming of the former. The magnetic assembly is attached to the basket using a combination of mechanical fasteners and high-strength, high-temperature adhesives for maximum reliability.

From the front side of the woofer, the injection molded co-injected polypropylene cone has an integrated dustcap, and is finished in a rich black that resembles brushed aluminum. The cone material was chosen for its balance of strength, stiffness and light weight. A tall, narrow butyl rubber surround allows maximum travel, while also helping to increase the effective diameter of the woofers piston area, or “Sd” in loudspeaker terms. The surround is attached to the basket and the cone with specialized adhesives. A temperature resistant rubber mounting gasket is provided to trim out the cosmetics of the woofer nicely and, at the same time, provides better sealing to the enclosure’s mounting surface. One minor quibble I had when mounting the Ti2 is the mounting holes are not at the usual 12, 3, 6 and 9 o’clock positions, rather they are in between, which makes mounting the woofer with the logo straight more difficult, and could mean drilling new mounting holes if you are using a ready-made subwoofer enclosure.

Below the cone, the voice coil former is centered by a progressive compliance poly-cotton spider. The former itself is also high tech, made from a blend of titanium and aluminum. The use of this special alloy provides lower mass, greater strength, and has excellent heat transfer properties.

The electrical signal is delivered to the dual voice coils via 12-gauge capable nickel plated spring-loaded terminals with easy-to-see polarity markings. From the terminals, the electrical signal flows through tinsel leads that have been insulated with a high-temperature heat shrink and woven into the spider in a manner that will not limit the woofer’s excursion. 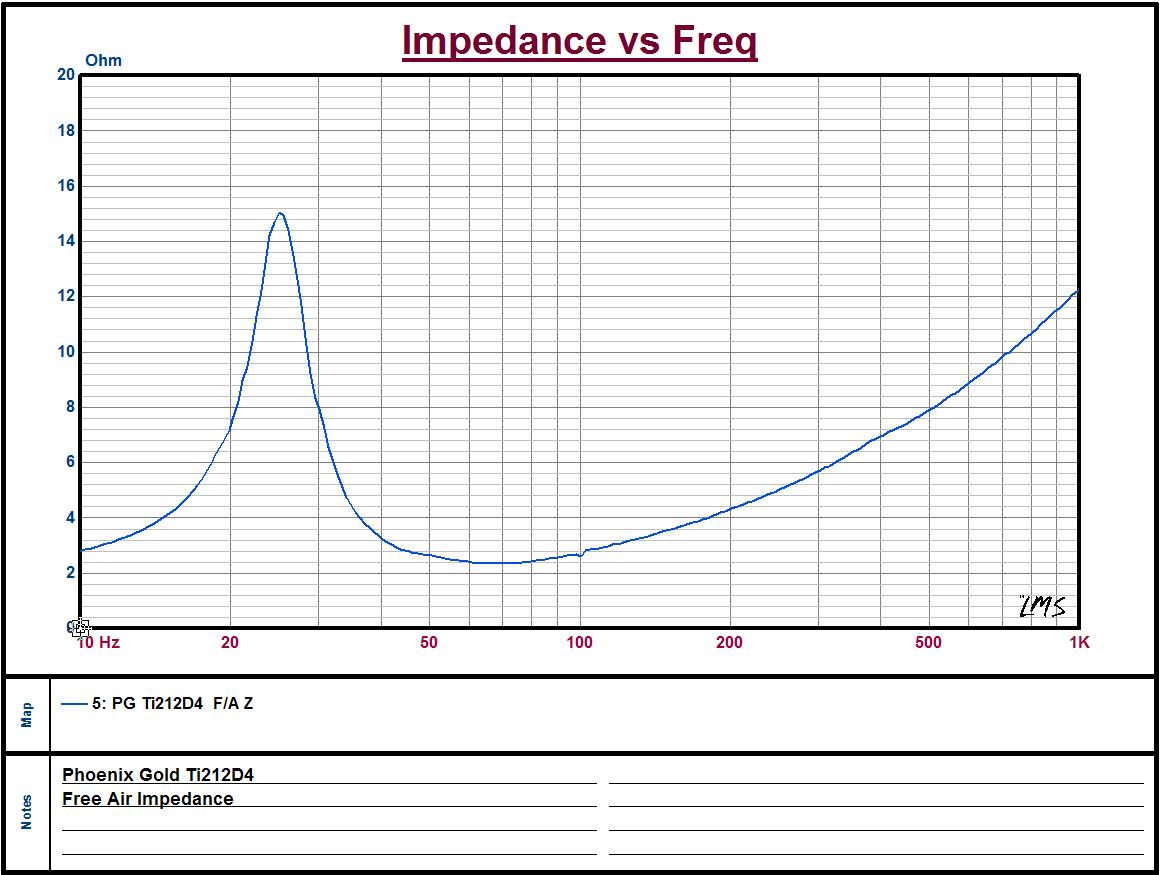 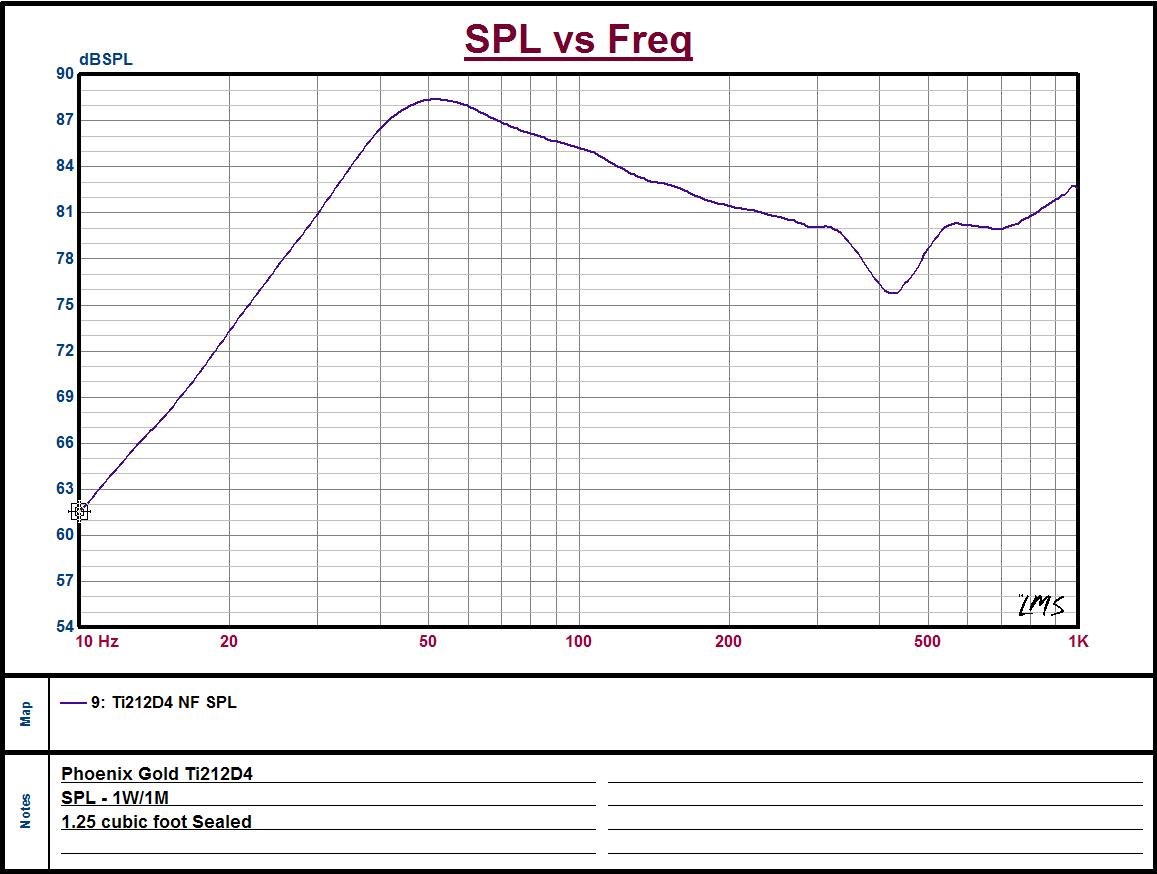 As usual before doing any listening or measuring, I exercised the woofer for several hours and allowed the mechanical suspension to limber up, and then I let it cool and normalize overnight. Phoenix Gold suggests a 1.0 cubic foot sealed enclosure for “normal” listening, and a 1.5 cubic foot sealed enclosure for “SQ” type performance. For my listening, I decided on a 1.25 cubic foot enclosure, as a happy medium. I securely mounted the woofer in my test enclosure, and the rubber gasket/trim ring did a great job of sealing the woofer to the baffle board.

In the sealed enclosure, the performance of the Ti2 woofer was excellent. The very bottom of the audible register was evident - it played low enough to easily hear the very subdued kick drum in Livingston Taylor’s “Grandma’s Hands”. This is a listening test I perform frequently, as a good many woofers do not reproduce these extremely low frequencies at audible levels. Switching things up to some well recorded rock and roll, the Ti2 woofer proved to be more than up to the task. Dire Straits “Heavy Fuel” and Marc Cohen’s “Walking in Memphis” sounded great, with a round fat bass sound. Plucked and slapped bass sounded realistic and crisp too, as it should. Heavy bass tracks like the Pussycat Dolls “Don’t Cha” and 50 Cent’s “Patiently Waiting” were reproduced with authority, and even under high-power transients, the ultra-long excursion of the Phoenix Gold woofer prevented any signs of stress or bottoming even though my instrumentation showed it had received signals in excess of its 600 watt rating.

As you would expect, it played louder overall in a vented box with the same power levels, but at the expense of some transient response, and with a much greater degree of what speaker designers and critical listeners call “overhang”. This is when the musical track has a deep note such as a kick drum or tympani that has a quick attack and a very short decay time. These transients sound “tight” or “dry” on a great system. When a woofer has “overhang”, the attack time is still quick, and you may hear the beater or stick on the drum head, but after the note is produced, it tends to ring for a bit before decaying. Brooks and Dunn’s “My Maria” had sounded tight and accurate in the sealed enclosure, but in the vented application it was just louder and lacked a bit of the great definition I’d heard in the sealed version. But, if you’re willing to give up some accuracy for more output, the Ti2 series woofer will work just fine in a correctly designed vented enclosure. Phoenix Gold suggests vented enclosure volumes of 2.0 cubic feet for normal, and 2.5 cubic feet for even higher quality sound.

Regardless of the type of music I played, or the levels I played it at, the Phoenix Gold Ti212D4 handled it with aplomb and seemed ready for more. Personally, I really like the sound of this woofer in the sealed enclosure, and that would certainly be my choice for an enclosure design in my own vehicle.

My Thiele-Small parameters differed significantly in a couple of areas from what is published in the woofer’s manual. However, normal production tolerances and taking the time to properly break-in the woofer before measuring it (as I did) may explain the differences. And it is stated clearly in the manual that the specifications are subject to change.

The Phoenix Gold Ti212D4 woofer delivers the classic looks of the Titanium series from two decades ago, but brings the performance and reliability of truly modern state of the art woofer. So whether you’re rolling in a new high-tech ride, or a classic muscle car, the Ti2 series woofers have you covered. If you’re looking for a subwoofer that plays low, loud and sounds great, while handling any type of music and lots of power all day long, you may want to cruise over to your local Phoenix Gold dealer, and check these bad boys out.

Phoenix Gold GX1200.6 Amplifier
Phoenix Gold's GX 1200.6 amplifiers is designed to cover a multitude of installation needs. Included in the line, is their proprietary PG quick...