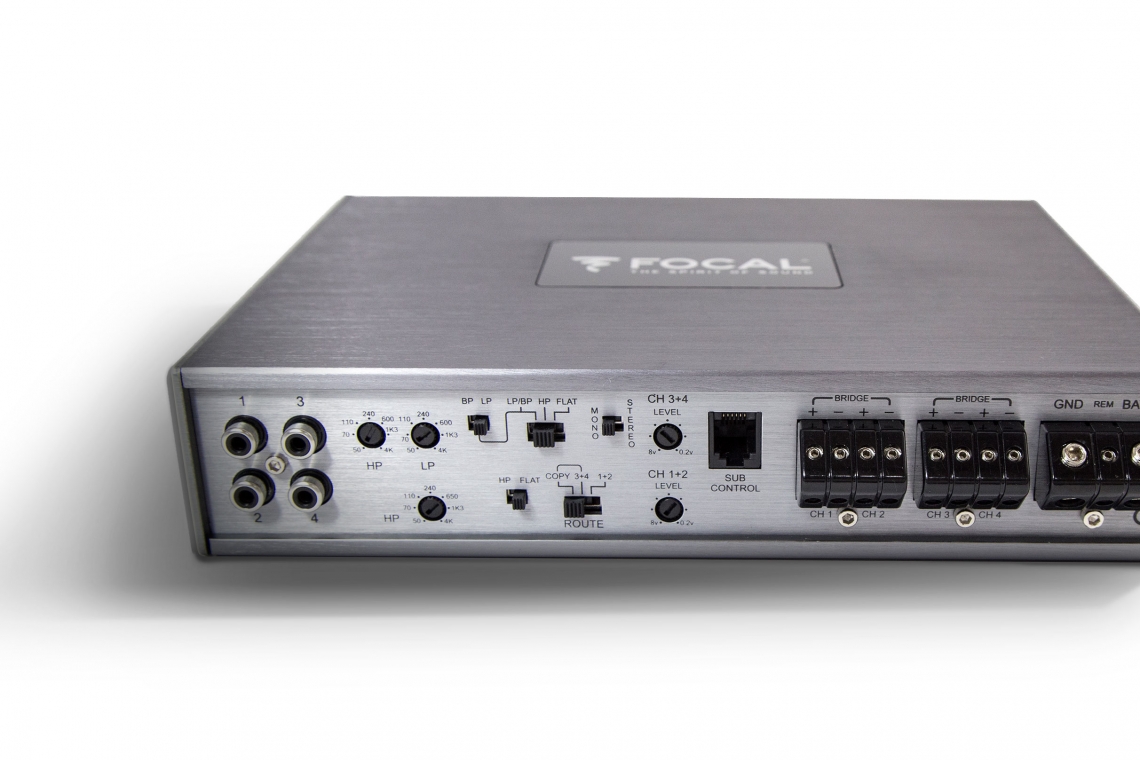 Long known for exceptional loudspeakers that typically incorporate new technology and old-world build quality, Focal has brought the same sort of approach to an all-new line of electronics. The FPD series of amplifiers are designed in the United States with the collaboration of well respected amplifier designer Stephen Mantz. The resulting products embody a blend of modern Class D efficiency and performance, combined with a serious passion for audio quality. 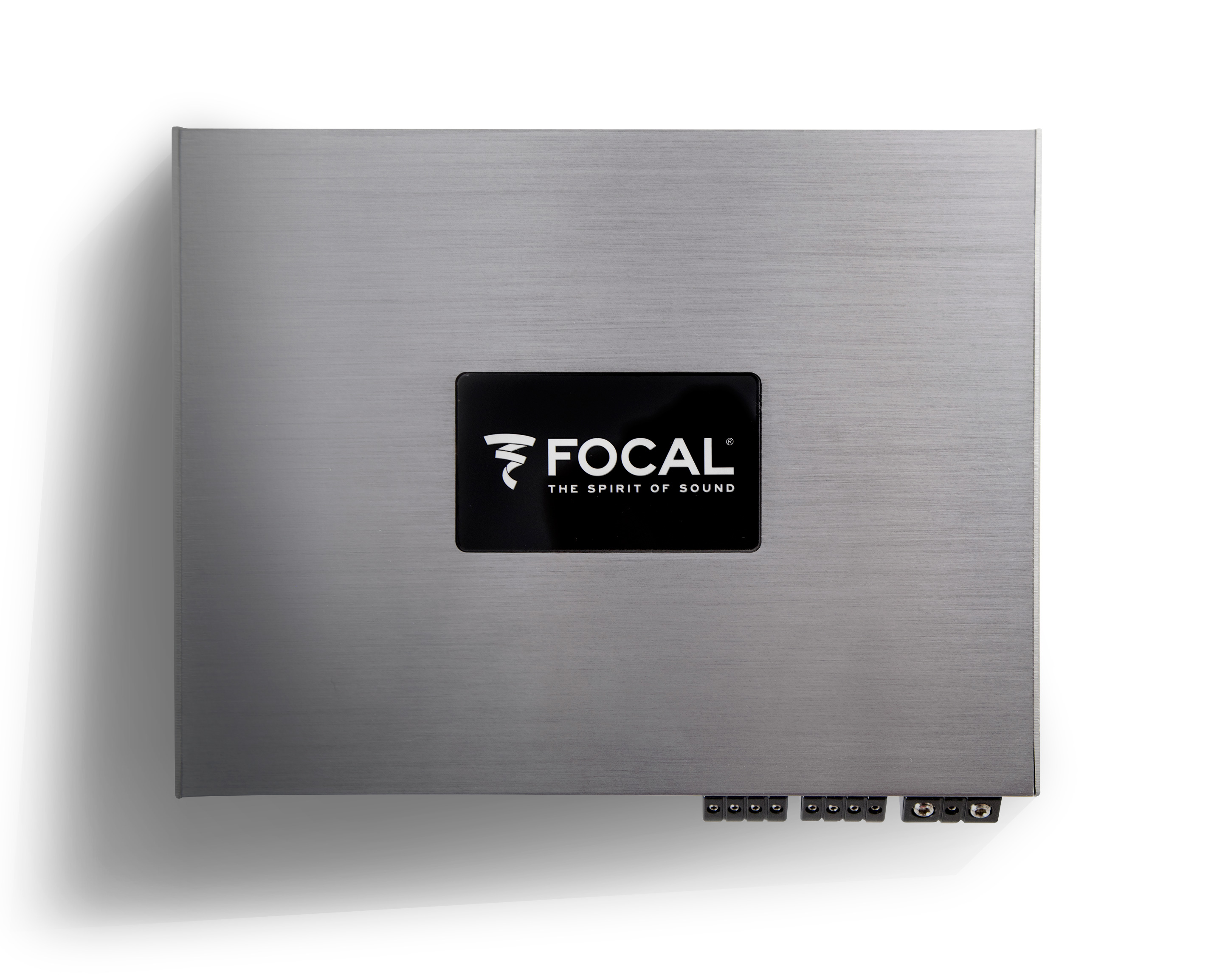 There are three models in the Focal FPD series, with a large monoblock that produces 900 watts into two ohms, and can be bridged to a second amp for truly insane power. An ingenious six-channel powerhouse capable of producing more than 1,300 total watts won the Innovations Award at the 2014 CES show. Finally, there’s the flexible four-channel model – recipient of an Innovations Award – which we’ll look at in more detail in this review.

My first look at the Focal FPD 600.4 reveals an understated and classy design. The amp has a smooth brushed aluminum finish without any protruding cooling fins or visible mounting feet. Mounting the amp is accomplished using a clever bracket that actually hides under the chassis of the amp and attaches to the sides with four flush-type screws. A nice Focal badge illuminates in white when the amp is operational. The result is a product that would fit right in with a high-end home audio system. It is designed for the ultimate in system flexibility, offering unique crossover configuration capabilities as well as some handy input signal steering that makes it easy to connect to virtually any system design.

The FPD 600.4 is rated to deliver 150 watts of power per channel at four ohms, or 200 watts per channel at two ohms. This is a lot of power from an amplifier that barely measures 9.5-inches long and less than 8-inches wide. Even more surprising is that despite its small footprint, the amp is designed with all of the connections and controls along one front edge. With everything grouped together, installation becomes simpler, as does the design of custom amp rack trim panels. In terms of connections, the Focal amps use  high quality screw-type connections, with the wires entering on a 45-degree angle from below, and the set screws on a corresponding angle from above. Perhaps to save some precious space, the connections are smaller than what I’m used to, with the power and ground accepting only six-gauge cable at the maximum, and the speaker connections handling up to 14-gauge wire. The 1.5 mm set screws for the speaker connections are certainly tiny!

Once connected, the controls of the amplifier are easy to access and relatively simple to operate, though I’ll confess I needed to read the (excellent) online manual to understand how the routing switch is used.

The crossovers can be configured as high pass, low pass, or, interestingly, bandpass, which is a popular option in Europe. The crossovers have a frequency adjustment range of 50 Hz to 4,000 Hz, with a second order (-12 dB) slope. This wide range of adjustment allows the FPD 600.4 to be used to bi-amp a woofer and tweeter, thus eliminating the need for a separate passive network. The aforementioned signal routing switch can be used to send two channels of audio input to all four channels, or you can simply use four channels of input and retain full fading capability. It can also be used to copy the crossover settings of channels three and four to one and two, providing easy setup when bridging the amp across two channels for subwoofers.

The position of the routing switch and a separate stereo/mono switch allow the FPD 600.4 to be setup in virtually any two-, three- or four-channel configuration. When used in bridged mono mode, the crossover slope doubles to -24 dB per octave.

Additional features include ‘signal sense turn on’ via BTL radio speaker outputs which, thanks to a fully isolated input topology, can be connected directly to the RCA connectors should a traditional 12V turn-on signal not be available.

A remote-mounted level control is included to adjust the subwoofer level; it also conveniently incorporates a red clip indicator LED to let you know when you’re overdoing things.

I have pretty high expectations for Focal products, and I’m happy to report the FPD 600.4 doesn’t disappoint. For my listening session, I use the amp in three-channel mode, with a pair of channels driving my reference component speakers, and the remaining pair of channels in bridged mode to a 12-inch subwoofer. I think this is a fairly common arrangement, and it will also tax the power supply enough that I’ll really be able see what the amp is made of. For my evaluation, I run the components at full range and the subwoofer set to a low-pass at 80 Hz.

As always, my listening session includes a wide array of well-recorded music, from classical to jazz, country, rock and even some not well-recorded rap and hip hop. I take some notes, and upon reviewing them, I think they convey my overall impressions of the amplifier as good as anything else I could write here. So, in no particular order, my notes are as follows:

• Very open and articulate, with a very good soundstage.

• Plenty of detail and sparkle in the top end; very natural sound.

• Pretty damn good amp, I could listen to it for a long time.

ON THE BENCH
Back on the indomitable Cogent test bench, I set about finding the real limits of this Focal amp. One of the first limits occurs during power testing, when I blow both of the internally-mounted 20A fuses. (Remember here that typical ATC automotive fuses will pass 200% of their rated current for two seconds, and seldom does a musical passage result in a current spike that lasts anywhere near two seconds.) Of course, power testing an amplifier with sine waves requires much more current for longer periods than typical musical passages, so while the supplied 40 amperes of fusing is actually quite appropriate for normal listening use, I substitute significantly higher fuse values to see what it can do. Also, all of the listening I did the previous day was with the original factory fuses installed.

A word of caution: do not try this at home. I’m taking an educated risk, based on what I see in the amp for devices, and my testing is performed in a very controlled environment. I will warn you again, installing larger-than-recommended fuses in your own amplifier is not only risky, it’s dumb and will void your warranty, so don’t do it!

CONCLUSION
The new FPD series of amplifiers follows a long Focal tradition of high-performance audio gear with a definite focus on sound quality. Employing an experienced designer like Mantz has led to the production of modern amplifiers with excellent power density, good overall efficiency, exceptionally flexible signal manipulation and typical Focal sonic excellence. The FPD 600.4 sells for about $599. While that is a little more than some middle-of-the-road stuff that’s out there, when you look at the build quality and performance, it’s hard to deny these amps aren’t worth every penny. 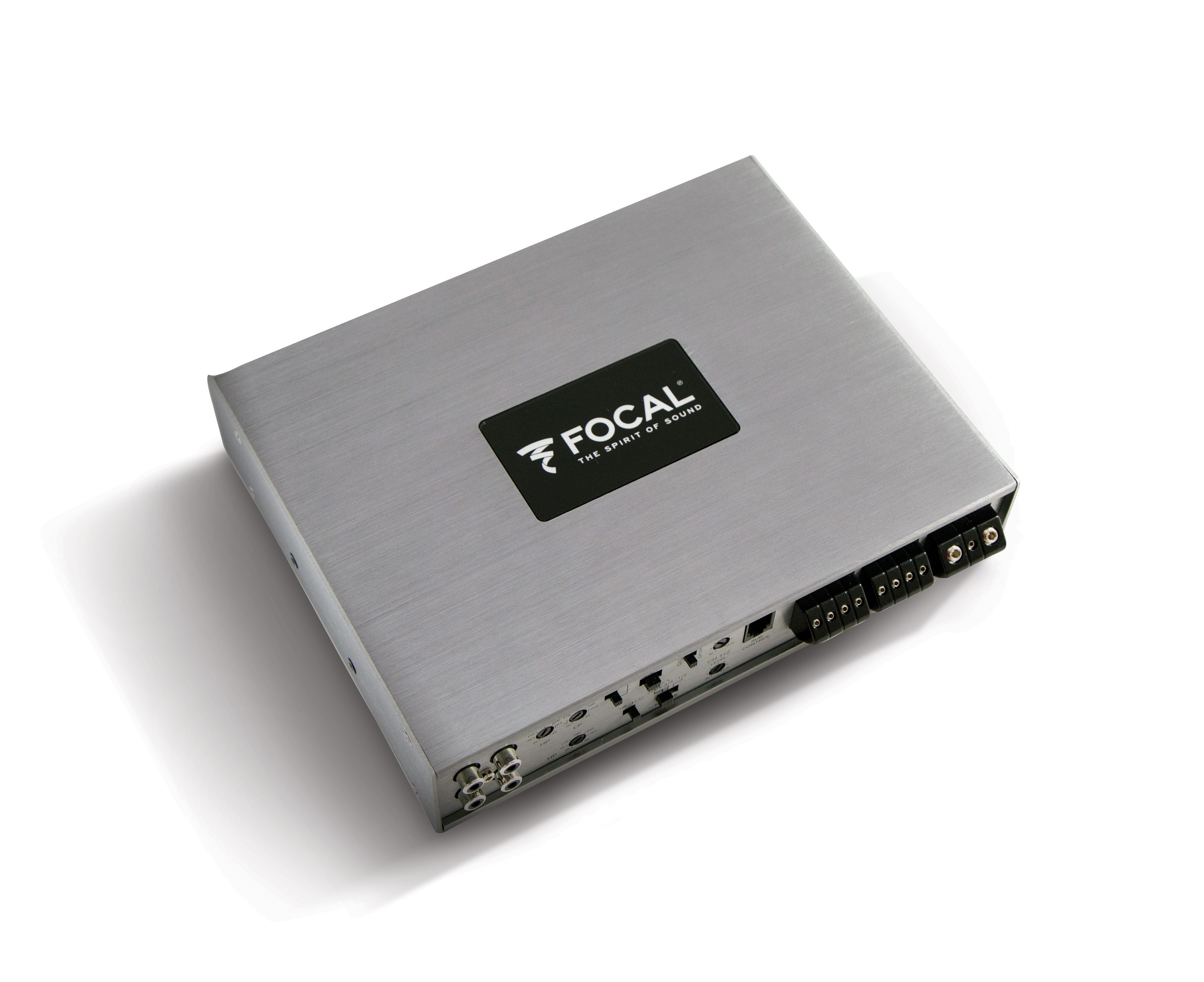