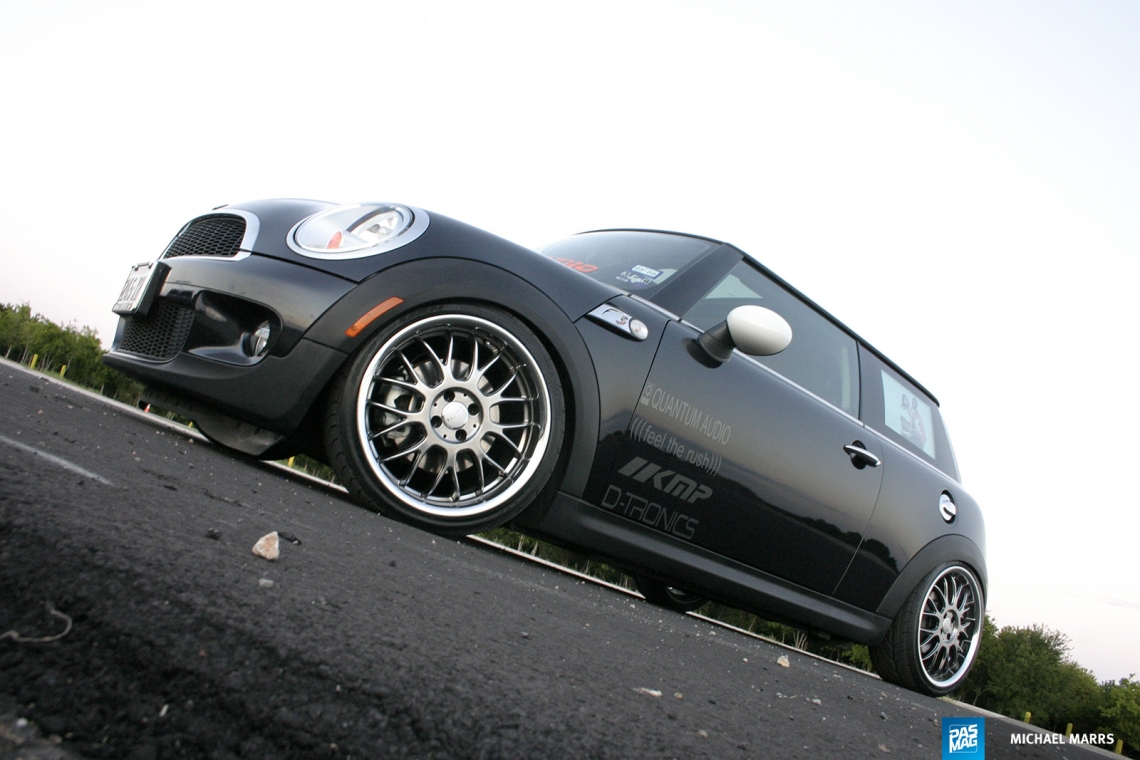 Let me start off by saying that the summer is meant to be enjoyed. It’s all about getting out, going away or just kicking back and relaxing. Unfortunately this isn’t something that Alex Mendoza and Joe Garcia got to do last year. Instead they were under lockdown for the summer of 07 in order to get this Mini done in time to debut at the 2007 USACi Finals. The vehicle was purchased new in June of 2007 and the honchos at Quantum Audio had just one request; have the vehicle ready for the USACi Finals come fall.

So with timeline in place the build was off and running. The vehicle of choice was a Mini Cooper S due to the ample space for its size, mass appeal to overall consumers and lastly because it fit perfectly into the vehicle transport trailer used to haul demo vehicles to events. 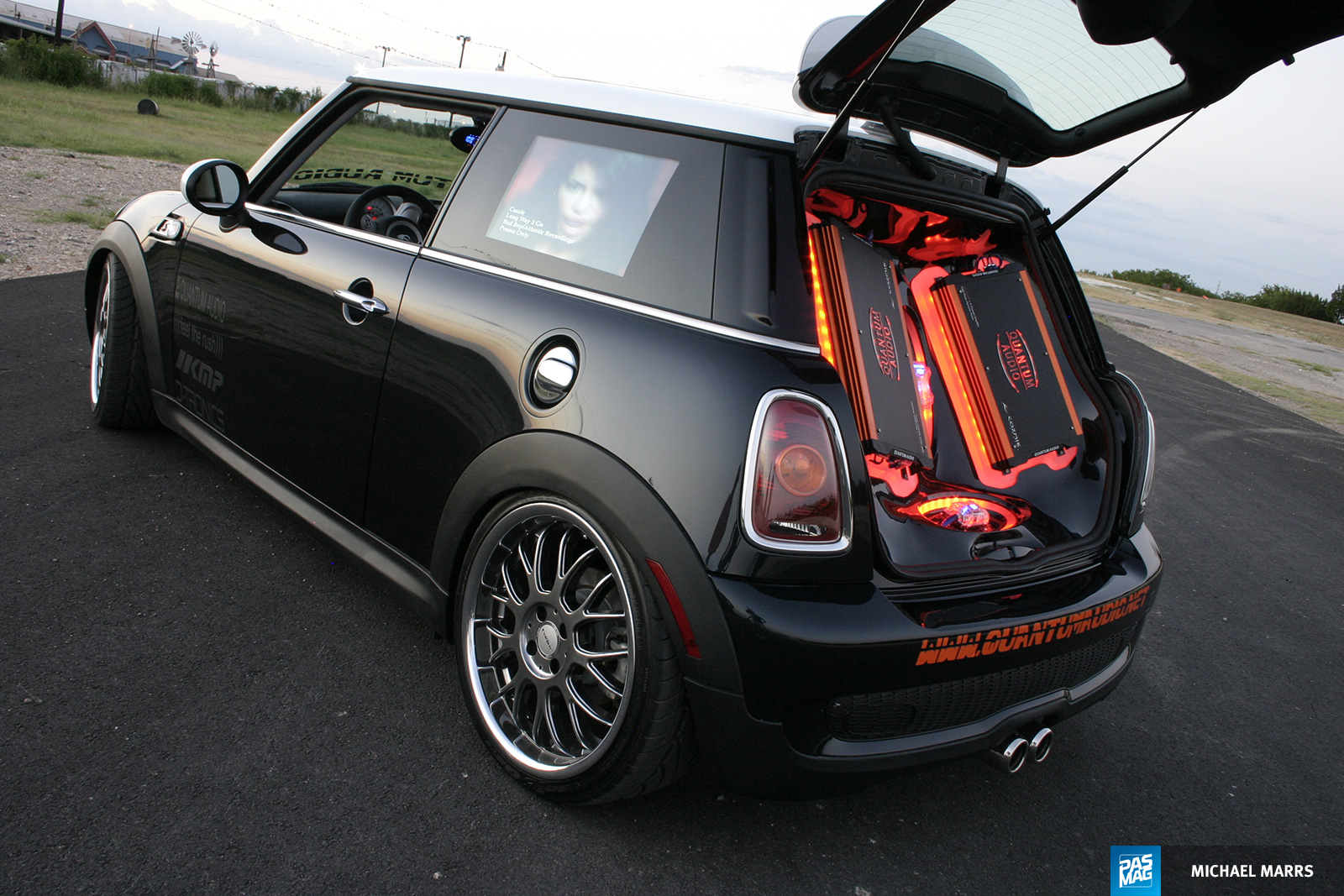 The first stop the vehicle made was to KMP Motor Performance in McAllen TX where the stock rollers were tossed out and in their place a set of 18-inch 5Zigen Sports Engine wheels with Nitto Neo Gen 215/35 rubber was chosen. While the vehicle was up on the hoist getting the rim and tire swap it was also decided to give the Mini a more aggressive stance so they opted to swap out the stock suspension and install a Pro Street-S coil-over kit with Eibach Springs. When it was all said and done the end result of the new rollers on the lowered Mini was a perfect fit. 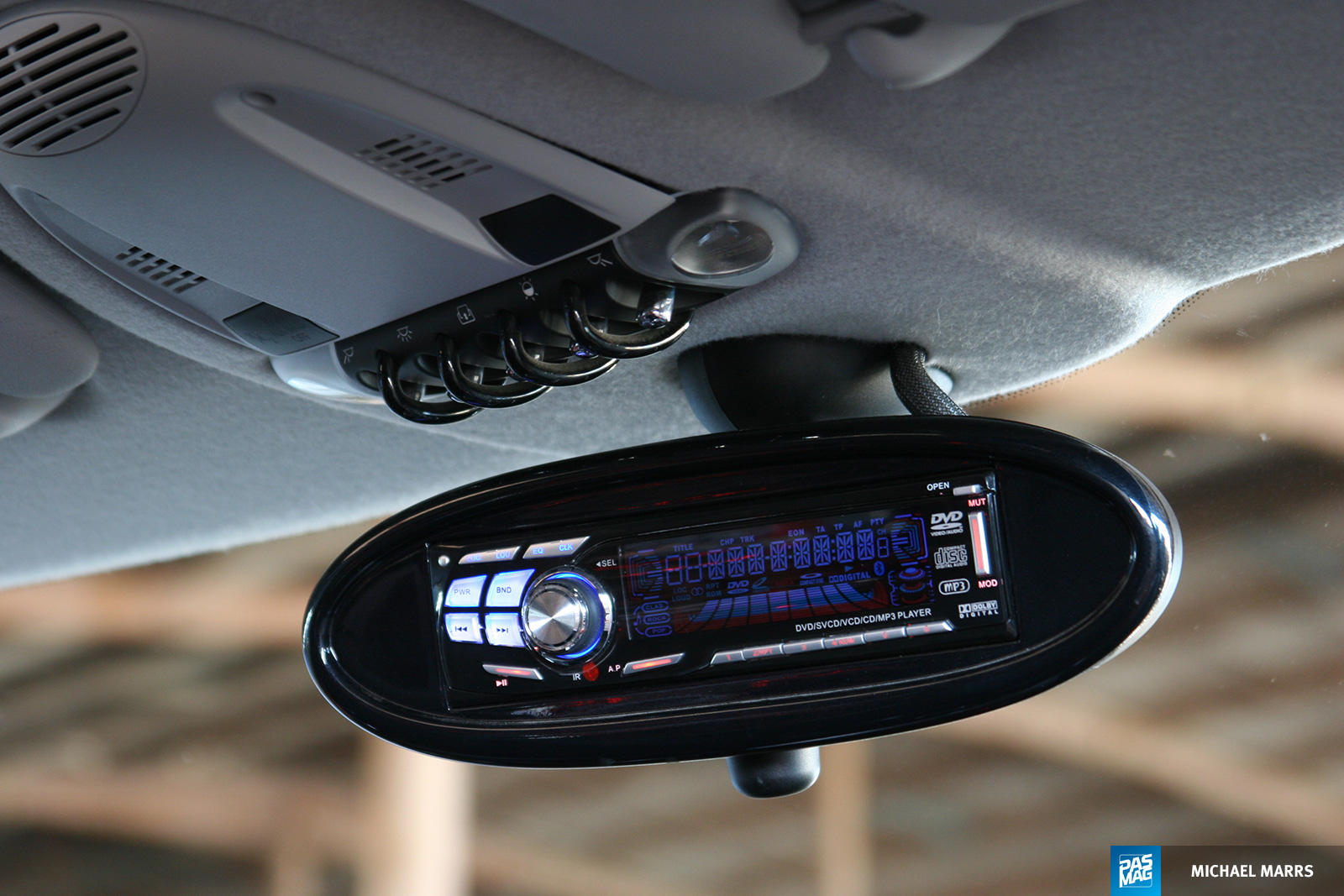 Now with the Mini in the hands of Mendoza and team it was time to get down to business. First thing on the list was to strip everything from the b-pillar back along with the door panels. One of the few pieces that were left intact was the rearview mirror and just to clear up any misunderstanding this wasn’t done for obvious reason you think. The rearview mirror or should I say the outer shell was going to be used to house the QDVD7000 source unit. Many of you are probably wondering what’s the driver going to use then to see what going on behind him. Well there really wont be a need to see out the back since a wall of subwoofers was going to be erected right behind the passenger and driver. 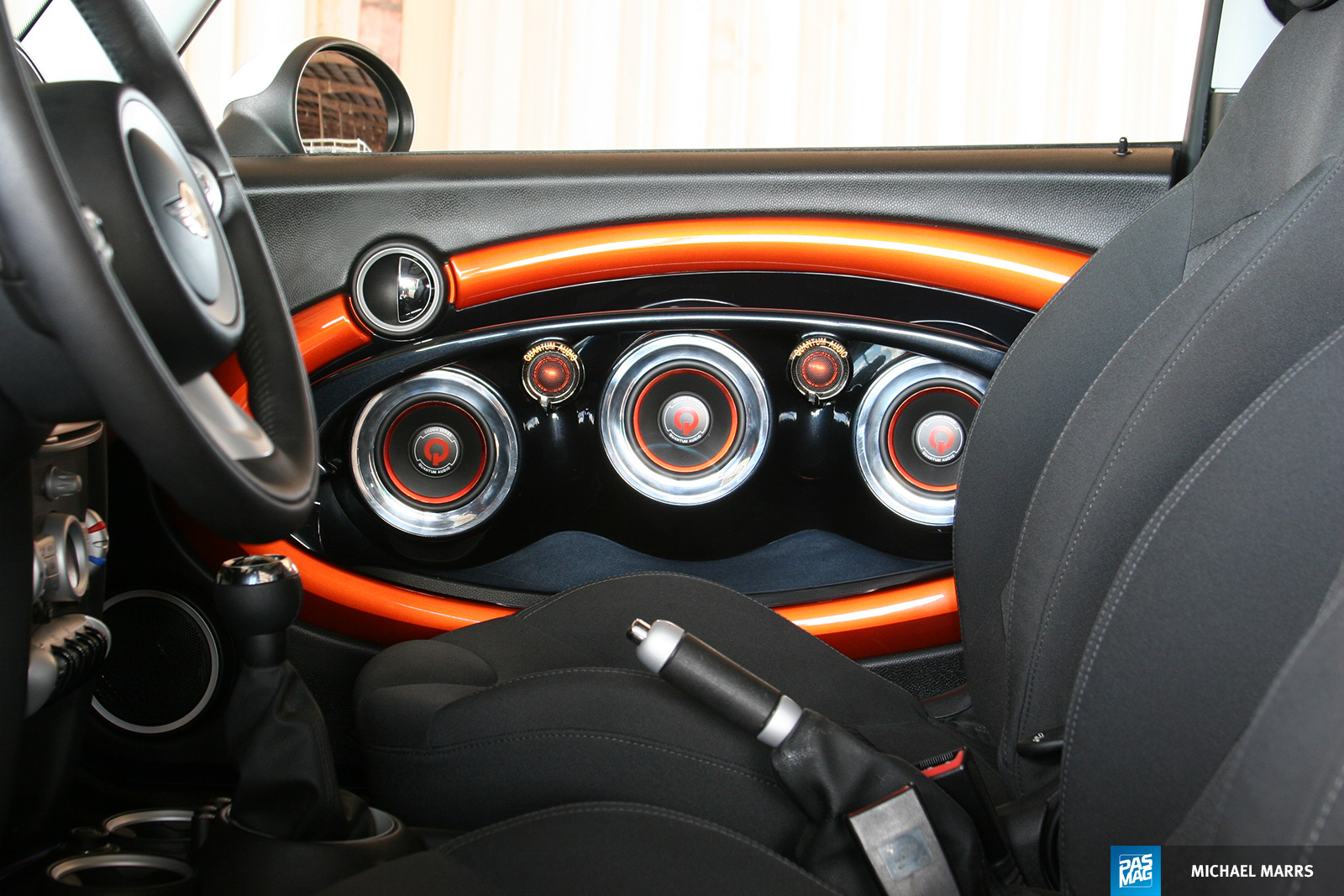 With the source unit taken care of the next step was to outfit the doors with the sufficient midrange to keep up with the sub-stage that was in store. So they opted to go with three QC500C 5 ¼ component sets for each side. A custom insert was created and molded into the center of the door taking up the entire panel in order to accommodate all the hardware. The end result was crazy with the panel painted jet black to match the exterior of the vehicle while the outer trim ring was painted to match the Quantum Audio orange they have become famous for. 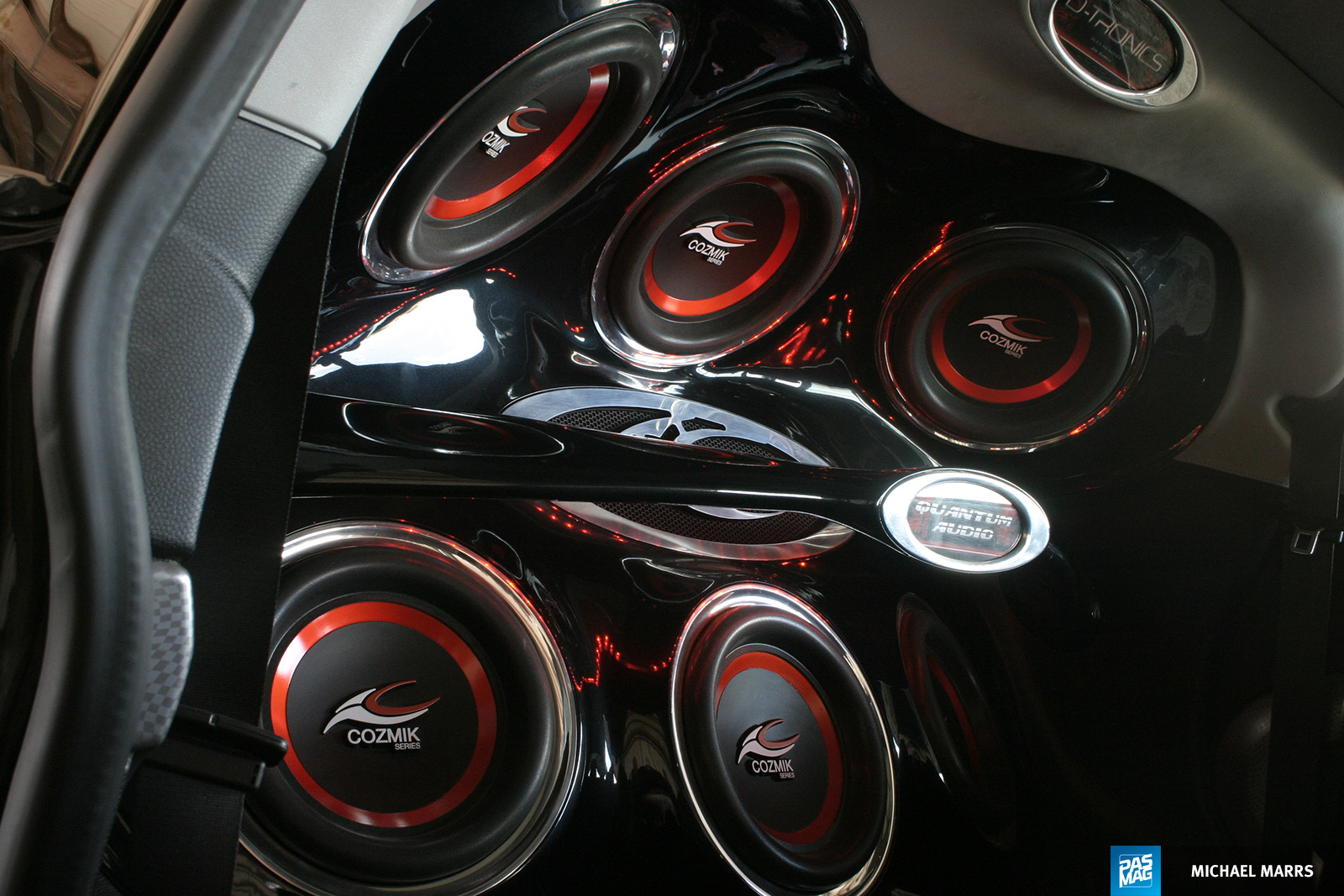 As I mentioned earlier a wall was in the works for the little Mini, to be exact a total of six Quantum Audio Cozmik QCW12D4 subwoofers were massaged into the back. They opted to go with a V wedge with three woofers up top and another three below. Smack in the middle of the wedge where the woofers vent, a piece of aluminum was machined into the Cozmik logo and a bridge crossing from one side to the other with a Quantum Audio logo embedded added the finishing touches to the install. 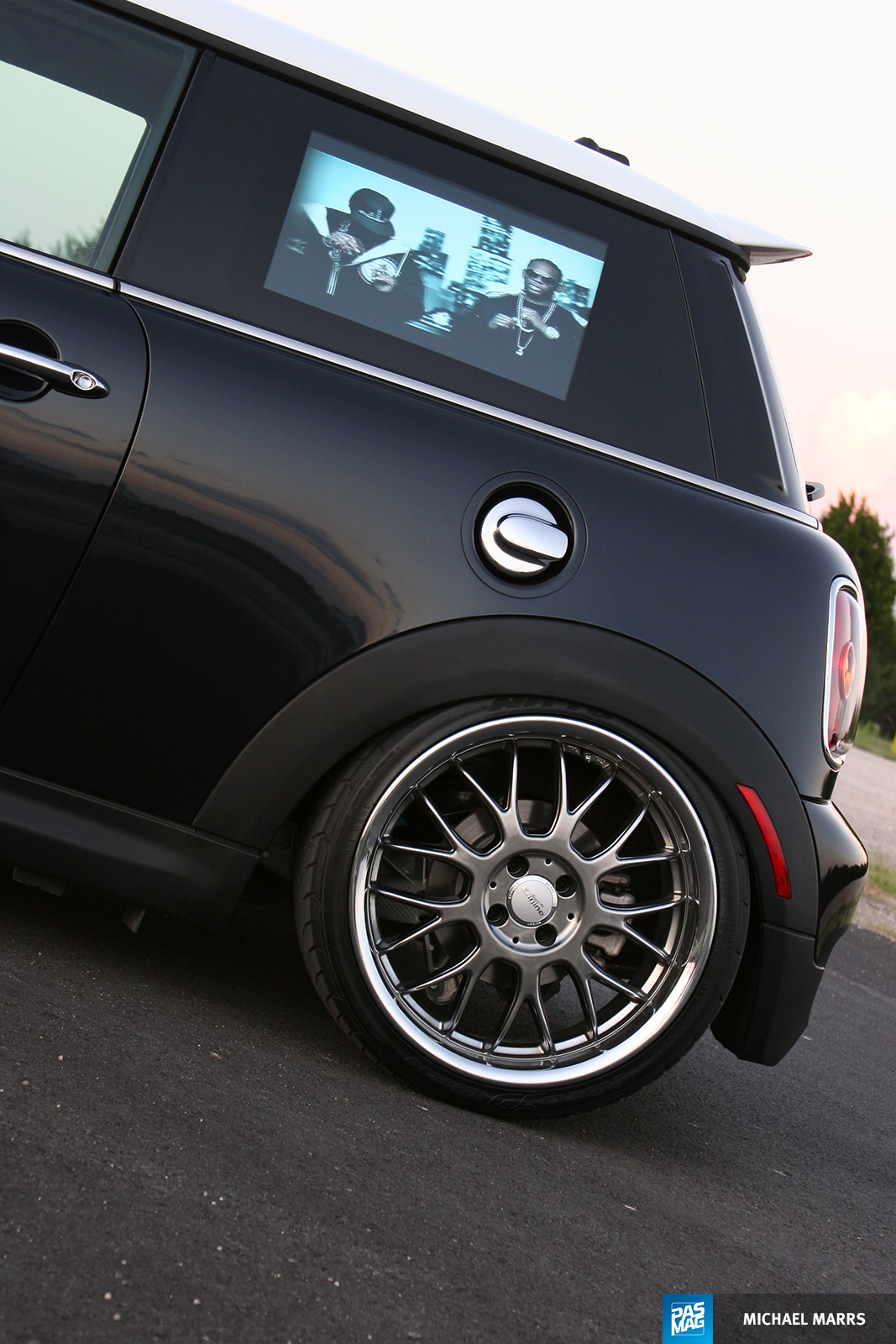 Adding multimedia into the mix was no easy task since the entire cabin was taken up by the wall with the half dozen subwoofers and the doors by the trio of component sets. So with space being scarce they opted to go outside of the box so to speak, they custom mounted a 20-inch Audiovox monitor on each rear quarter panel glass which that in itself was a mission to do but Mendoza and crew pulled it off. 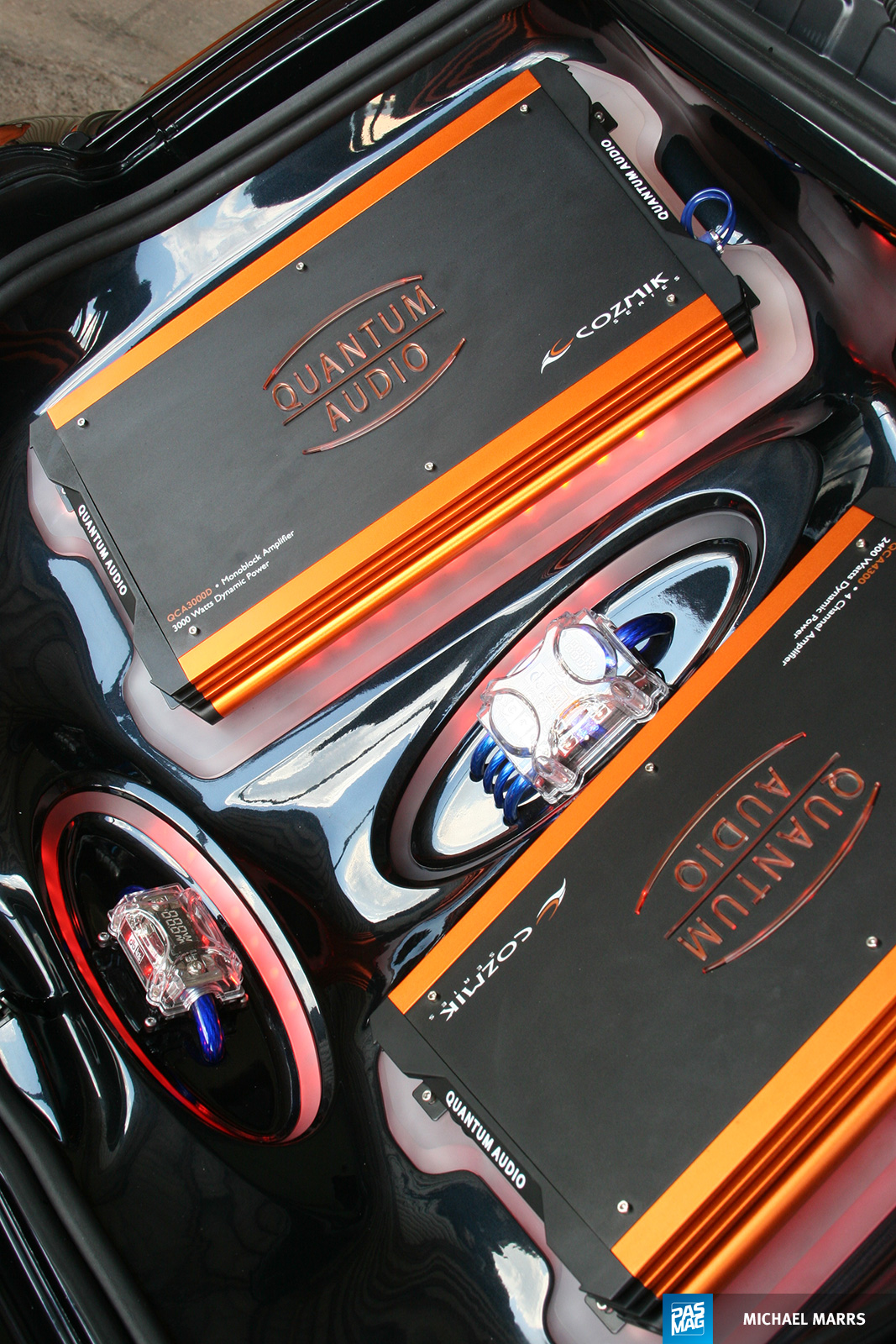 Powering the half dozen woofers and speakers is a pair of enormous amplifiers. A single QCA3000D monoblock amplifier takes care of the subwoofers and QCA4300 4-channell amplifier handles the mids and highs. Making sure the amplifiers are properly feed is the job of four Kinetik power cells; an HC1200 up front and another three in the back. Of course since power and signals don’t travel on their own db Link was called upon to handle all the wiring and power distribution. The various components along with the amplifiers are on display in an elaborate install which is once again painted to match the jet black exterior and Quantum Audio orange.

When it was all said and done the summer came and went and when the Mini was unveiled in the fall at Finals, it was a huge success. I can only hope this year Alex and crew were given this summer off to enjoy but knowing the guys at Quantum Audio that probably isn’t the case. 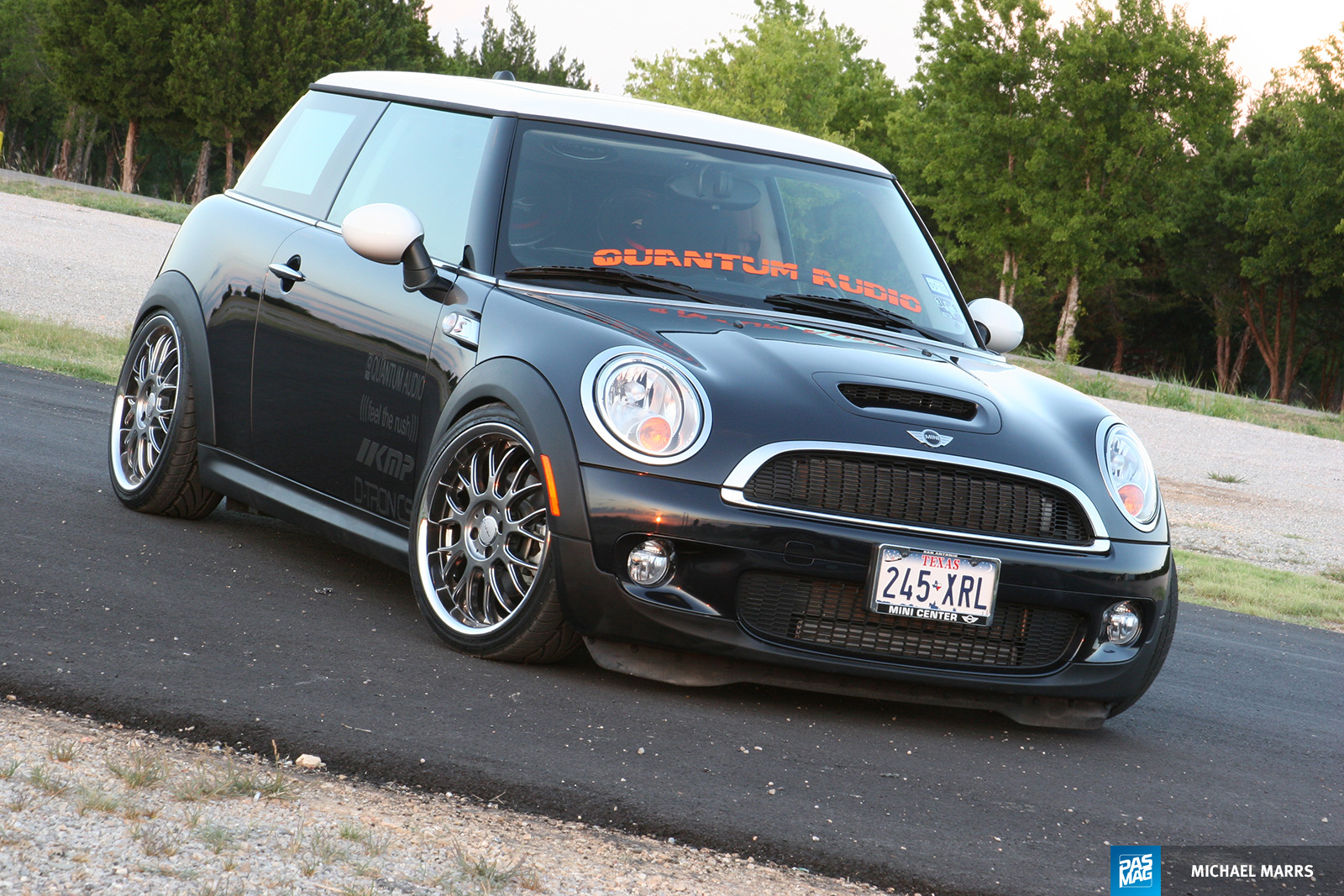 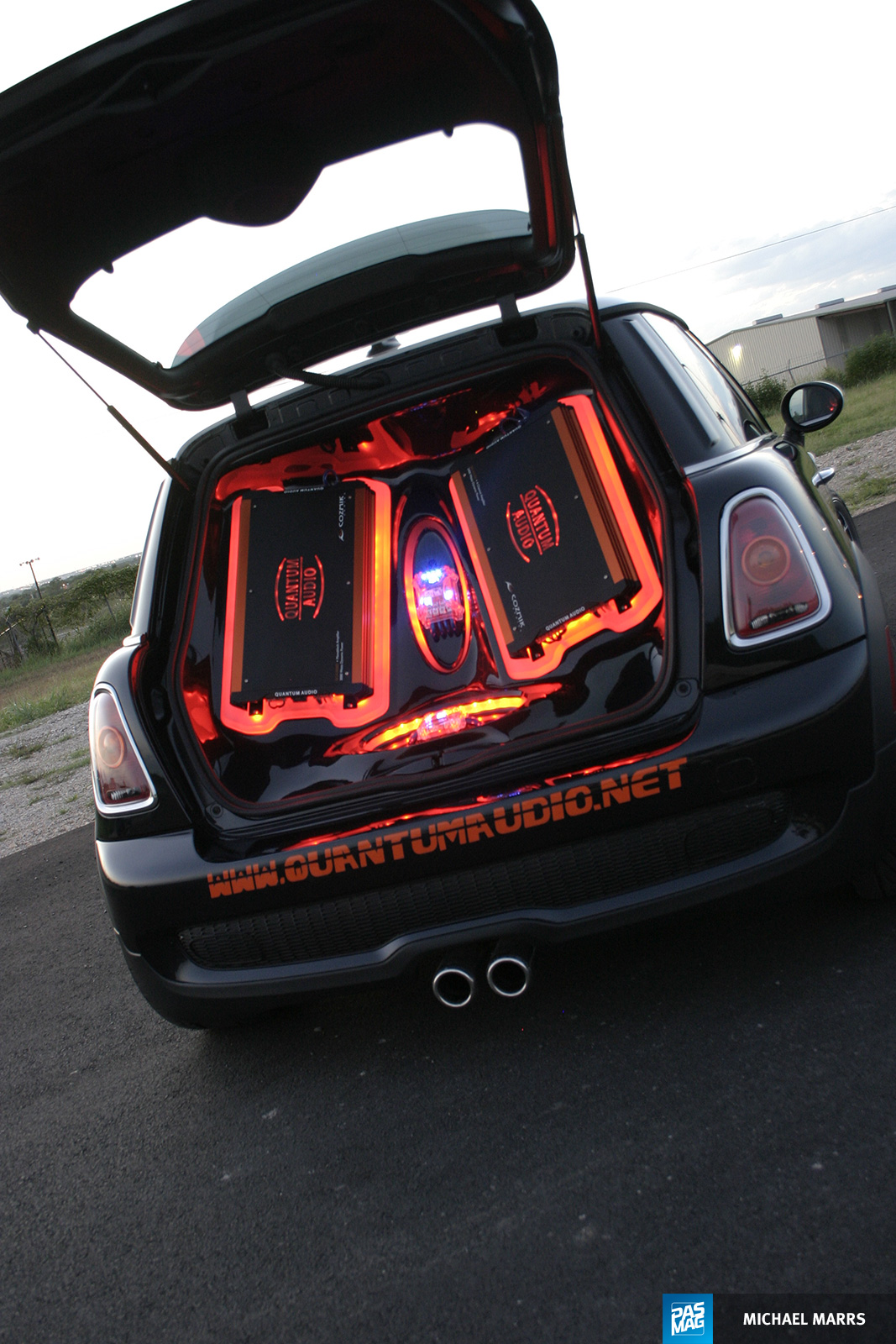 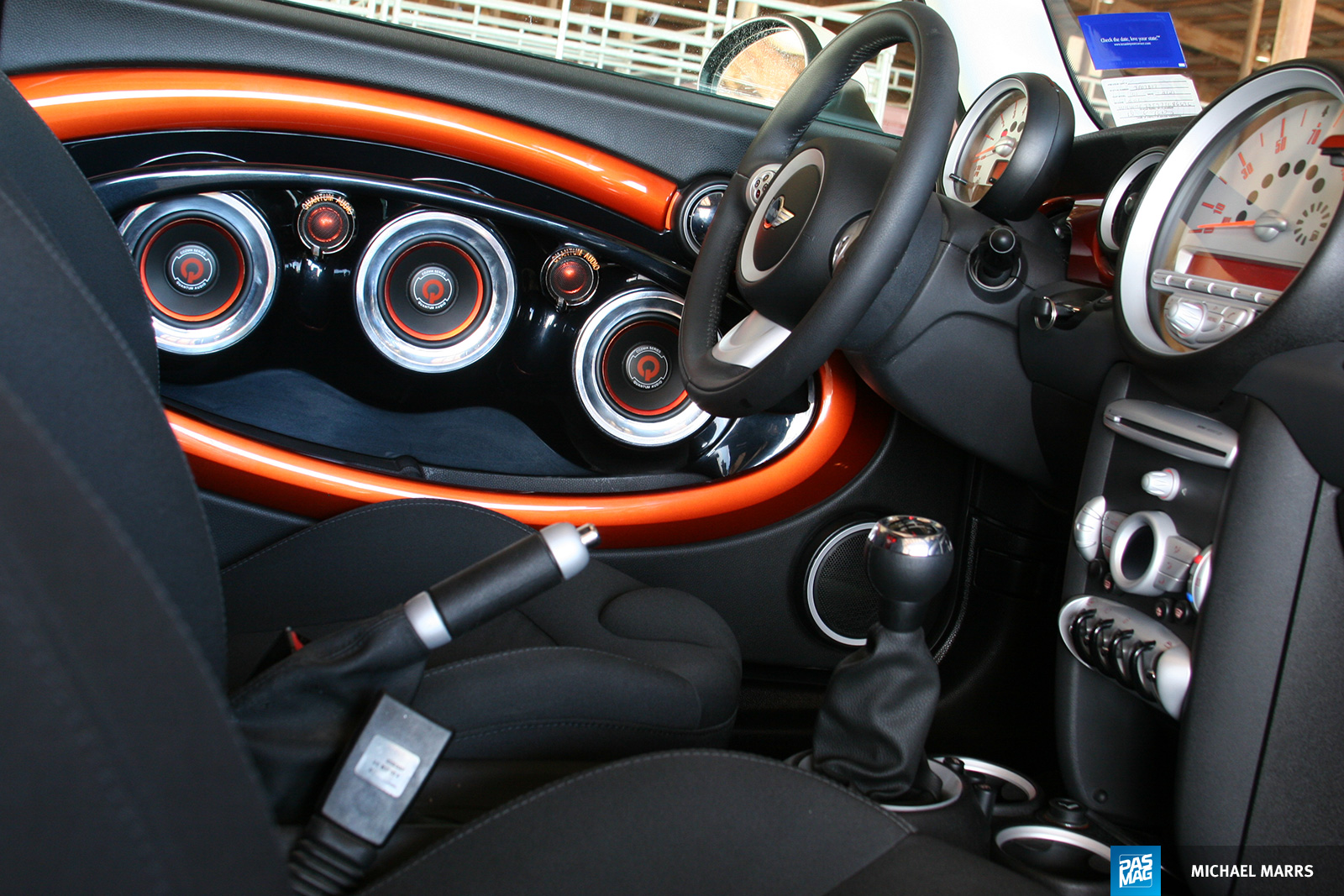 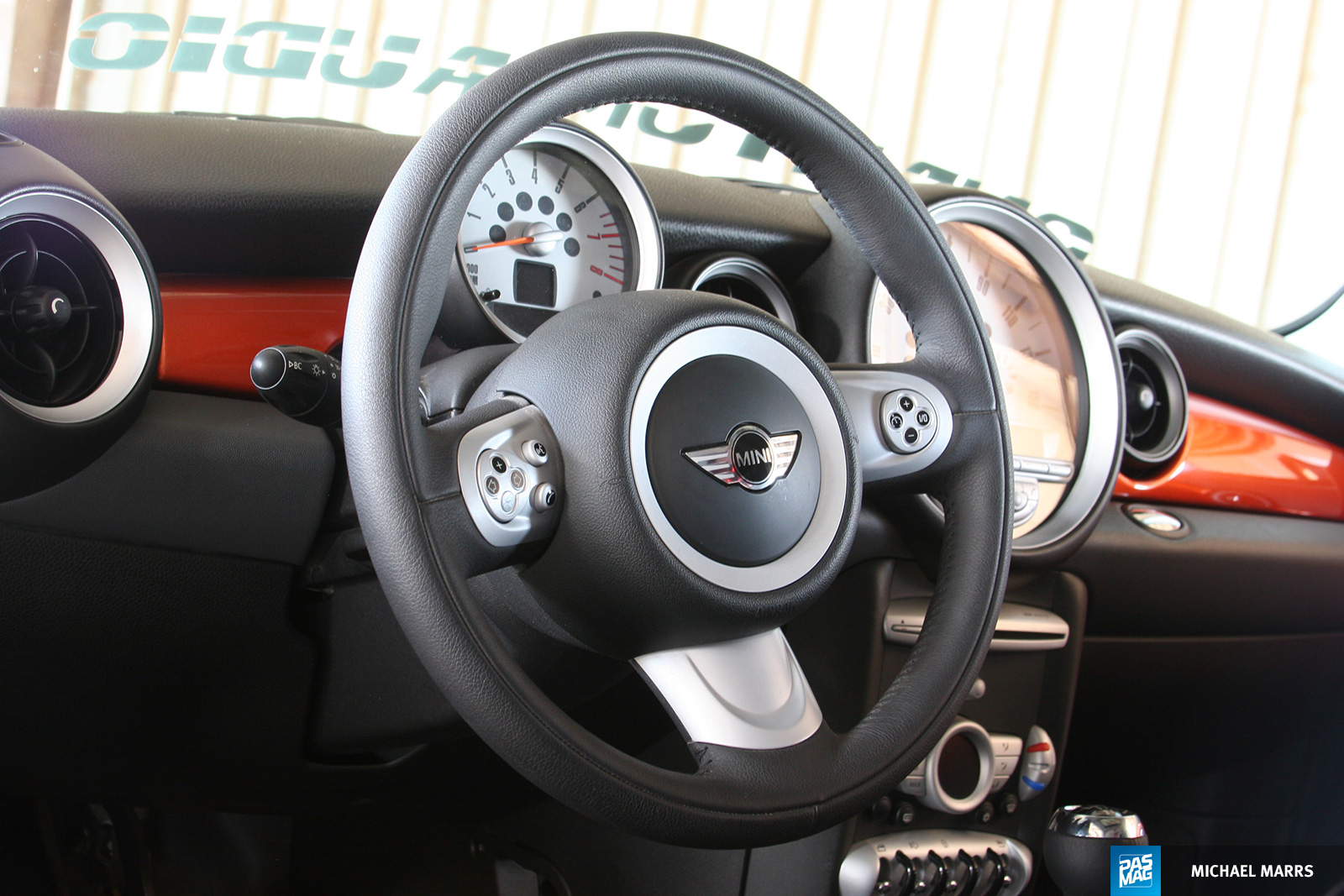 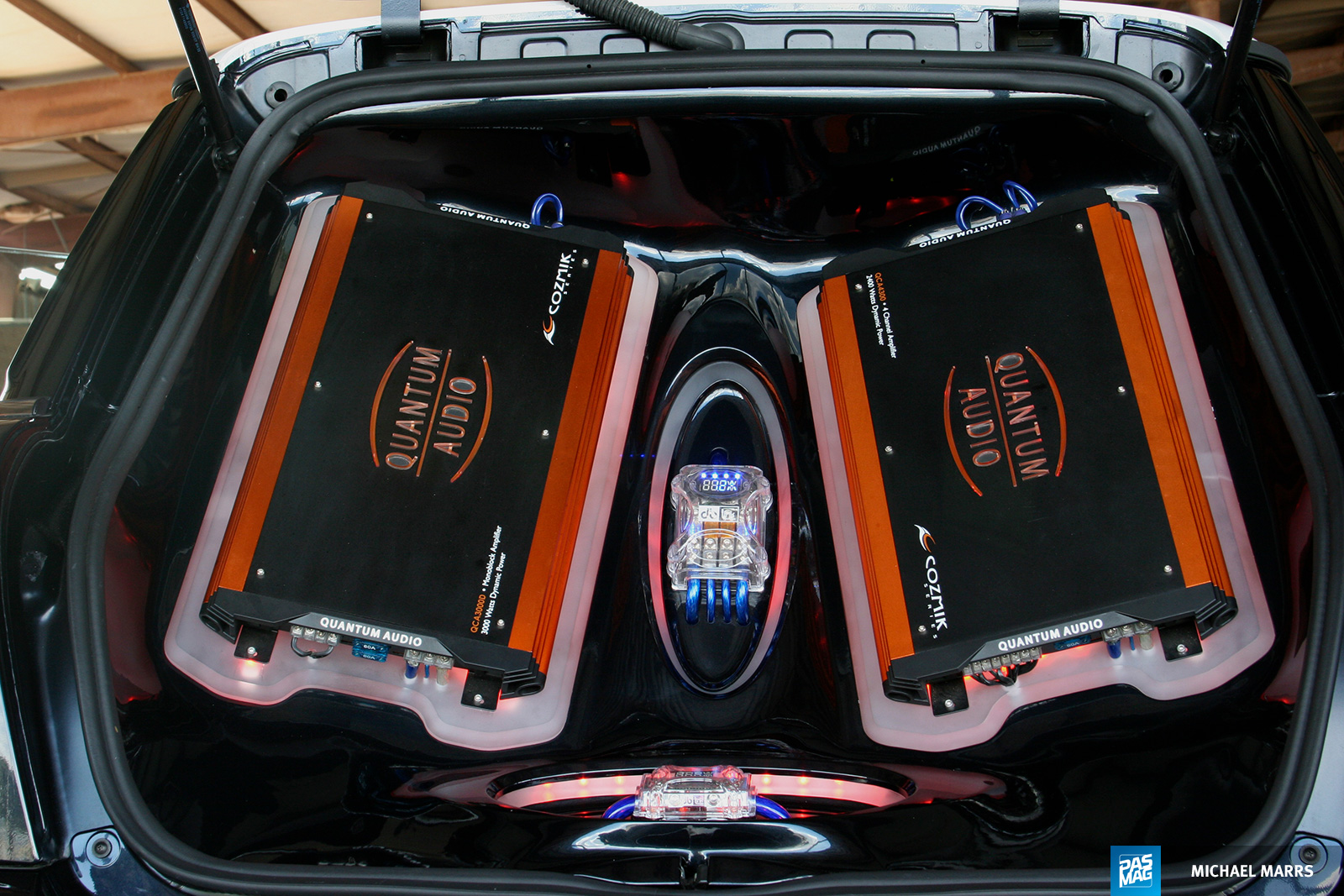 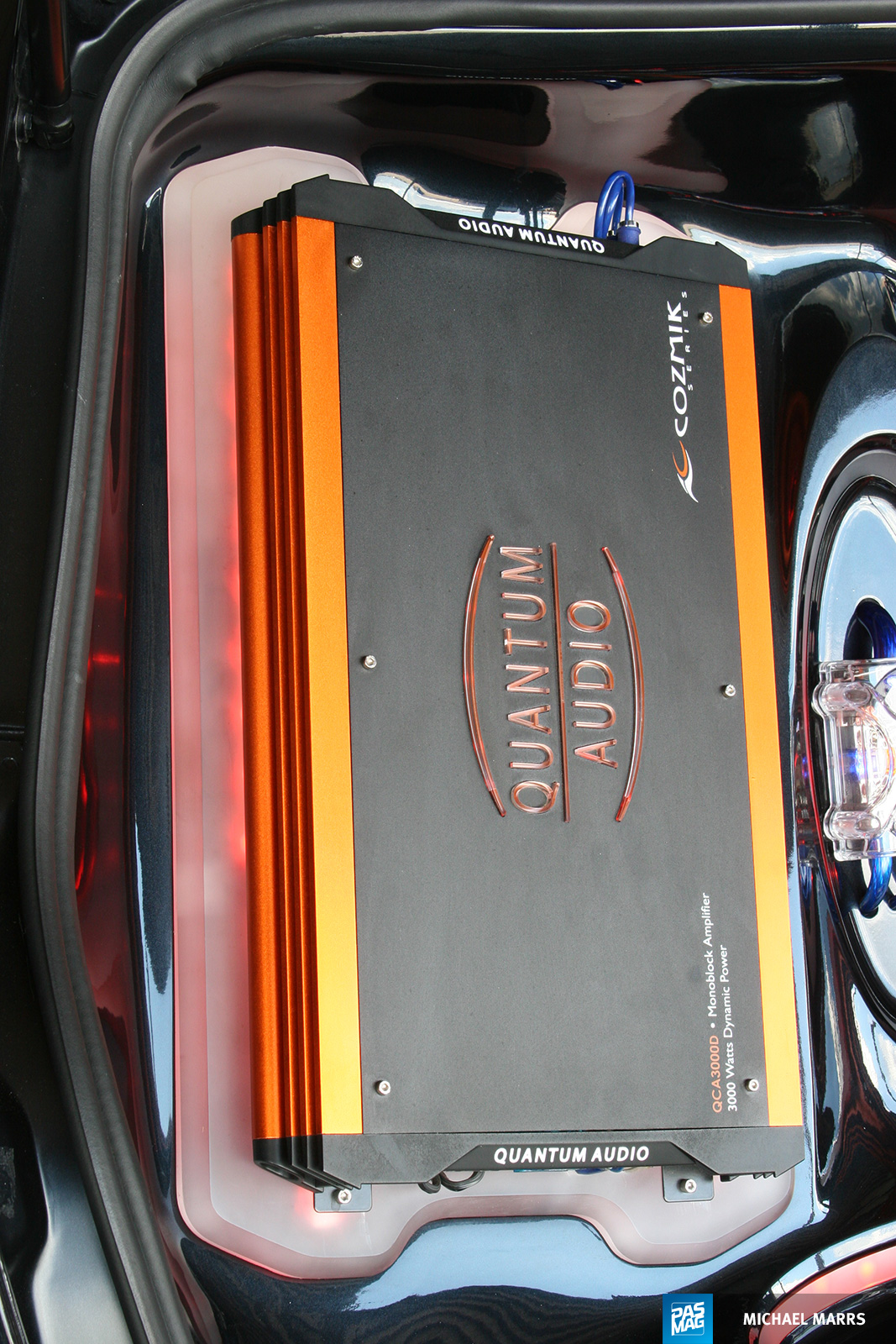 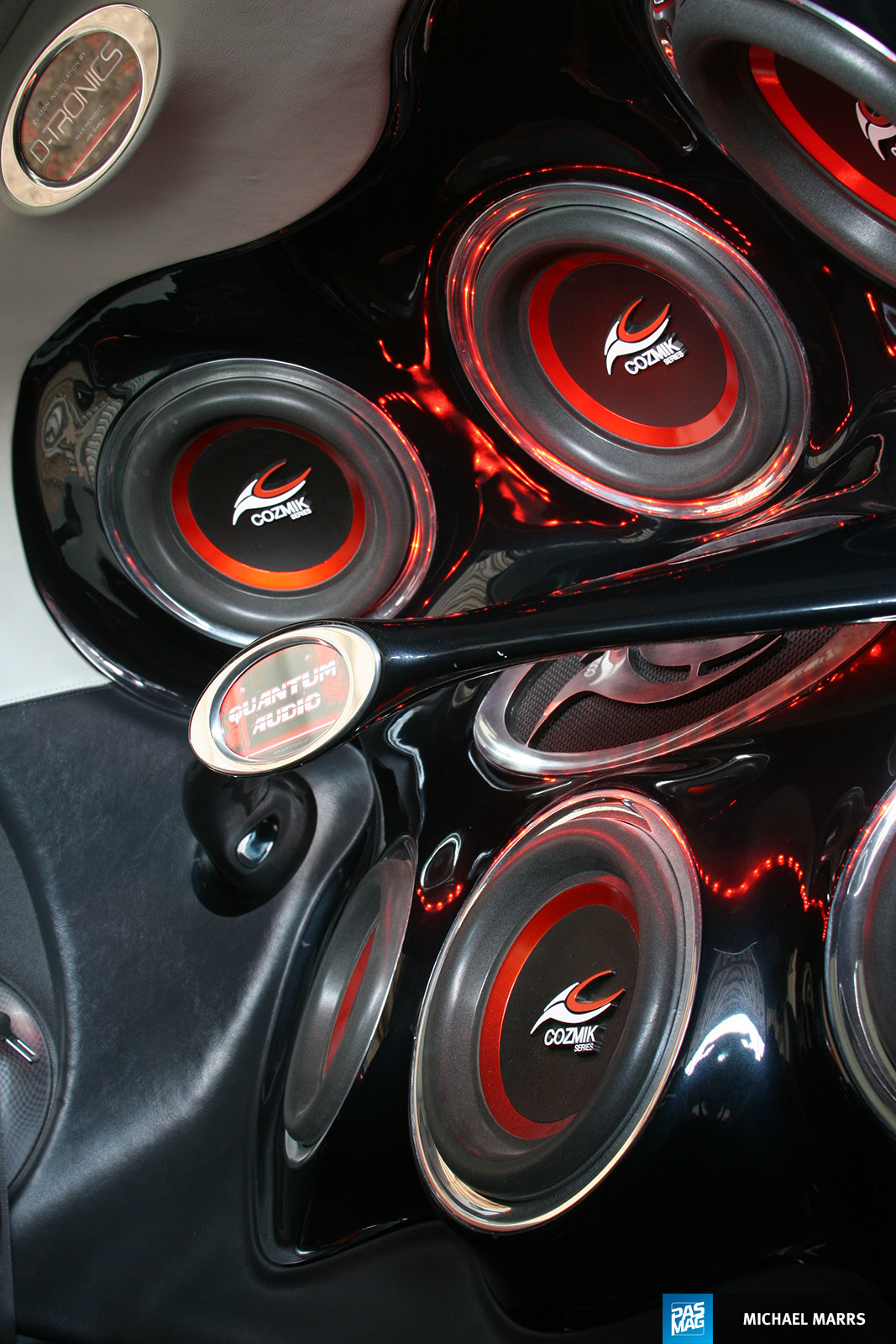 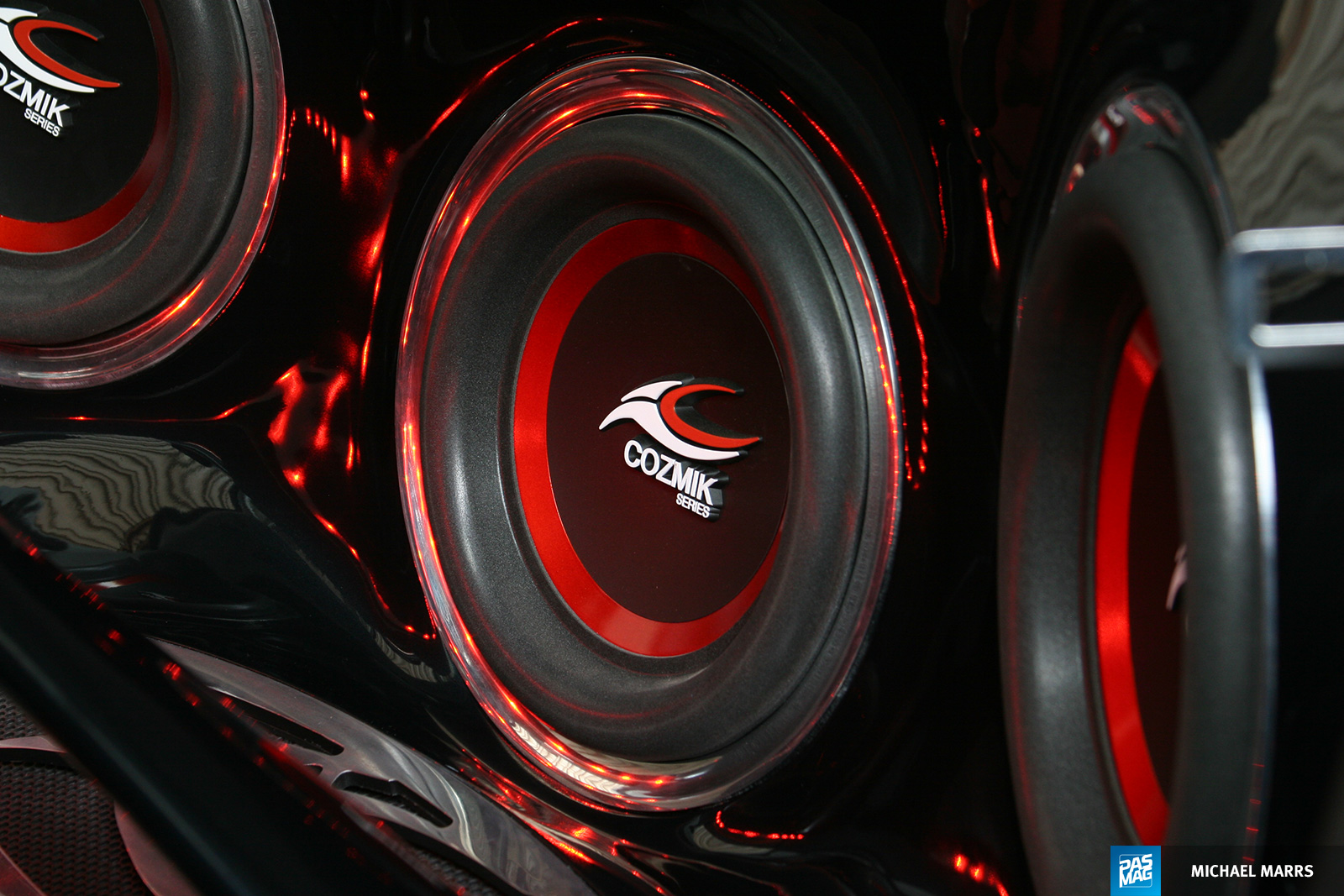 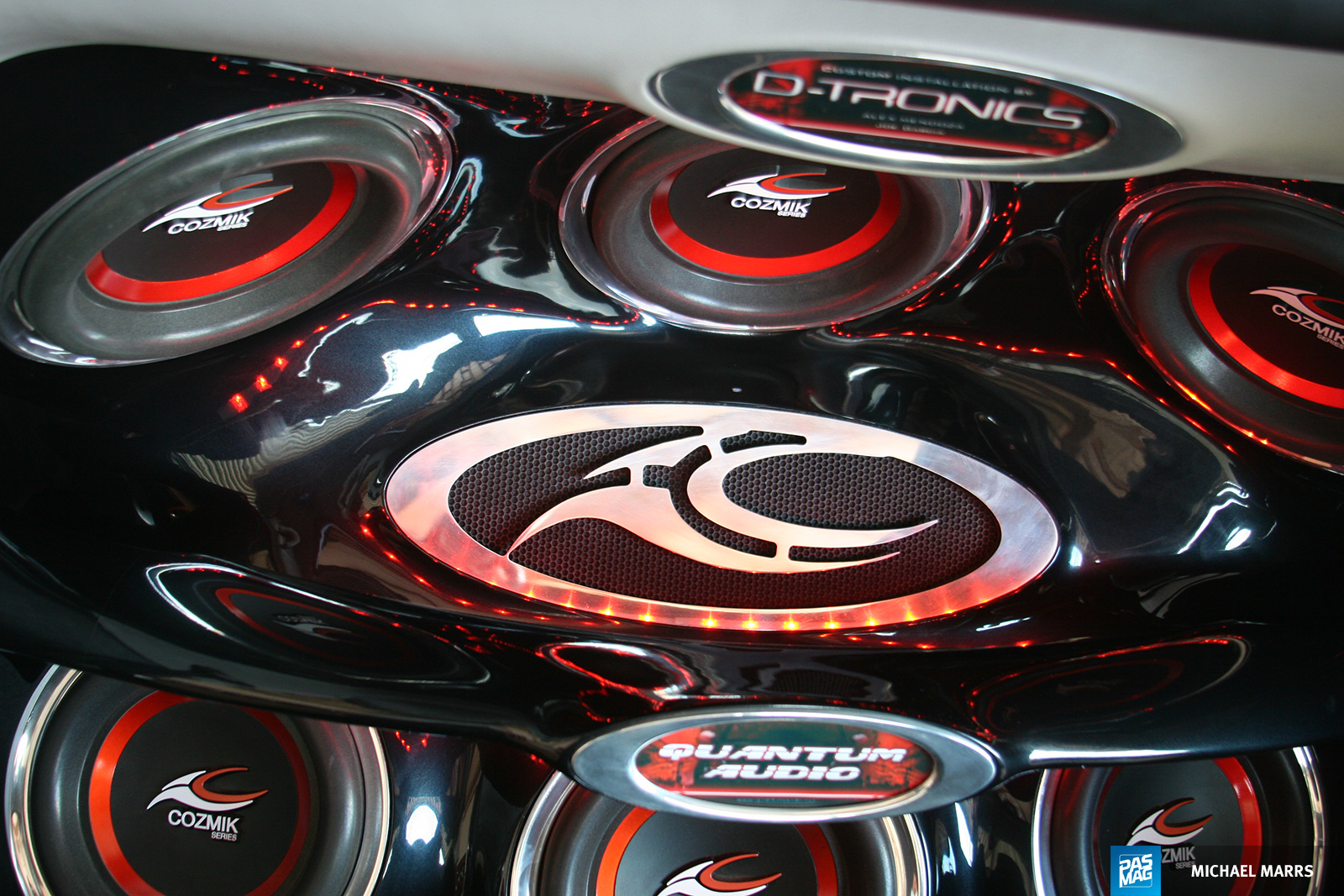 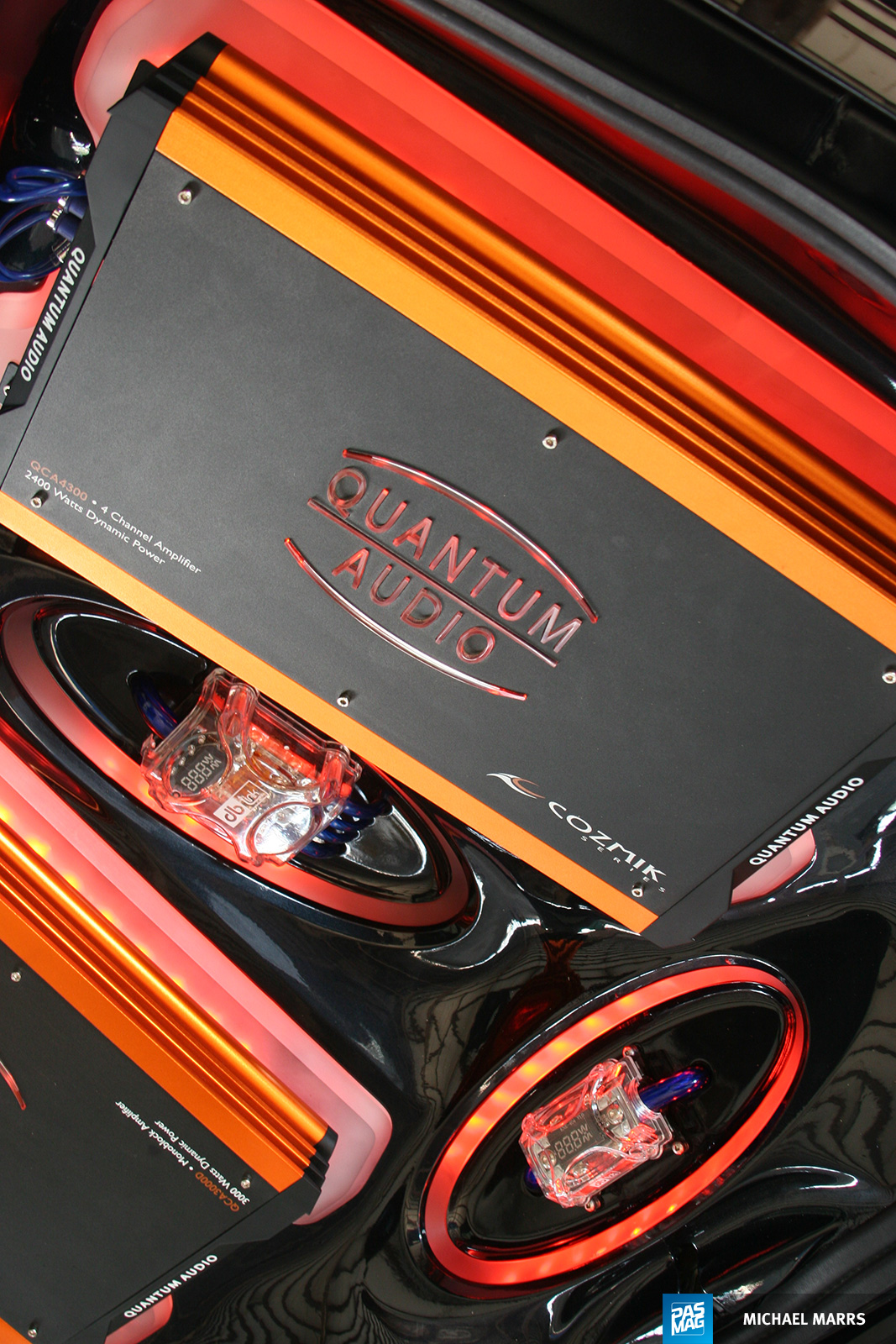 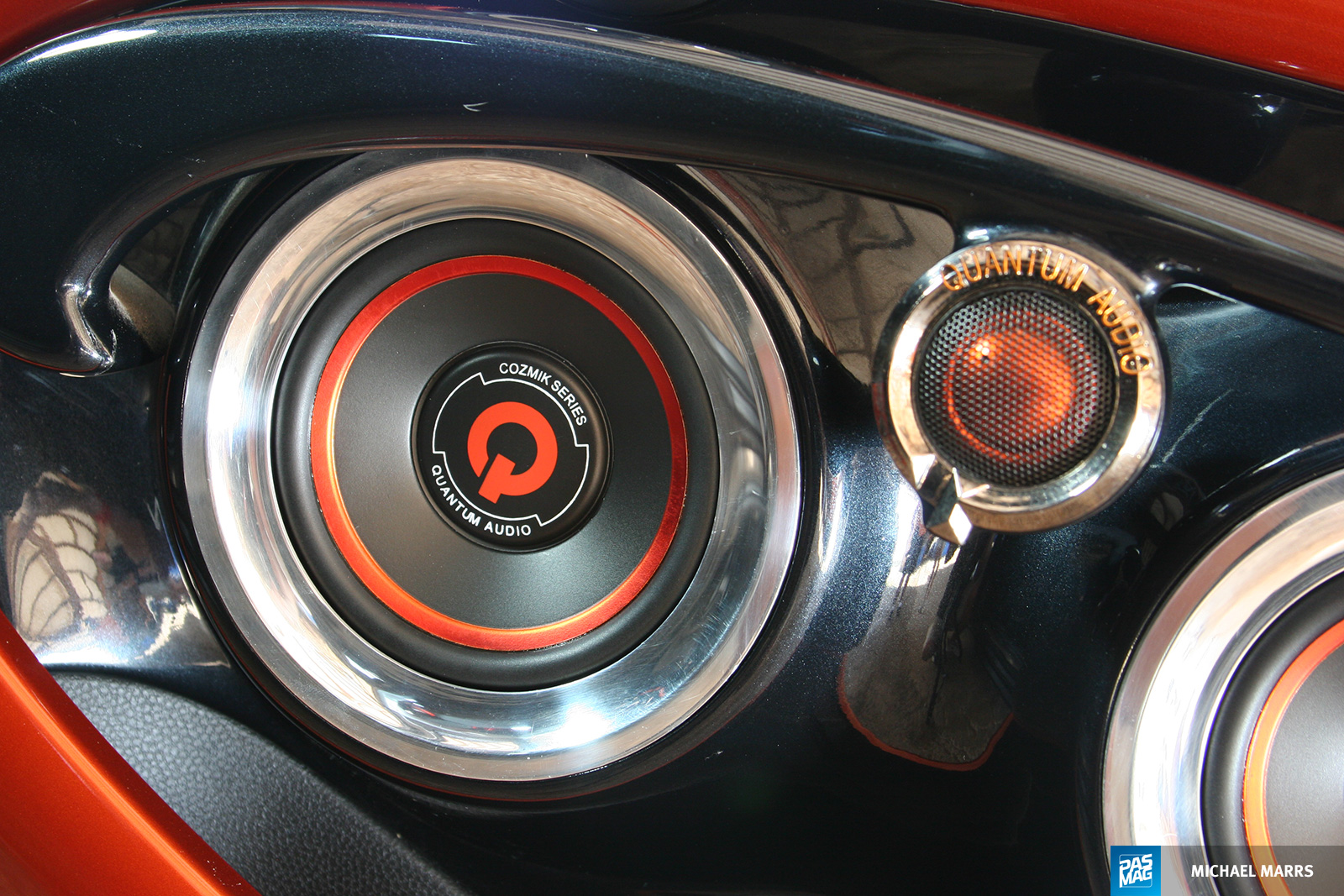 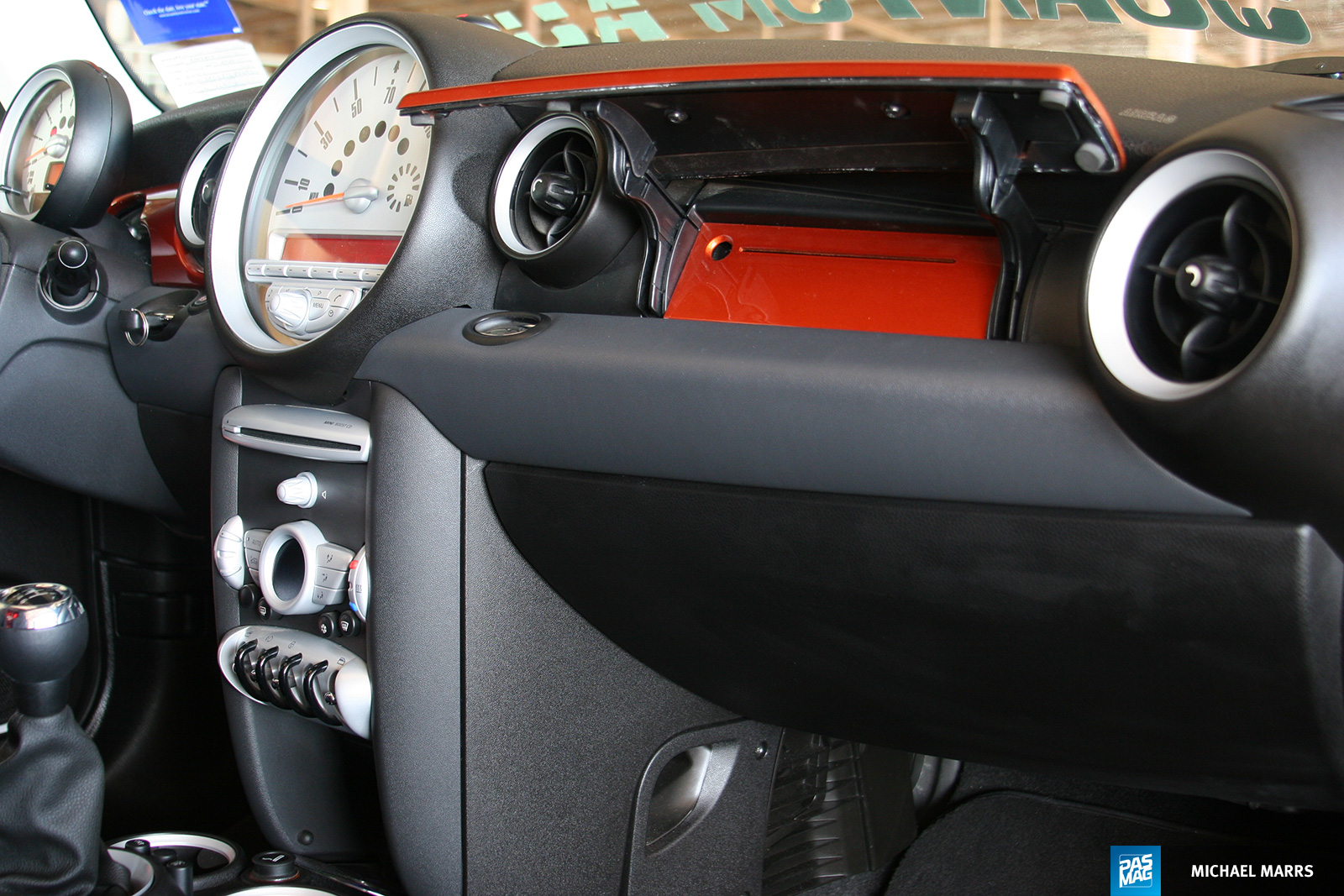 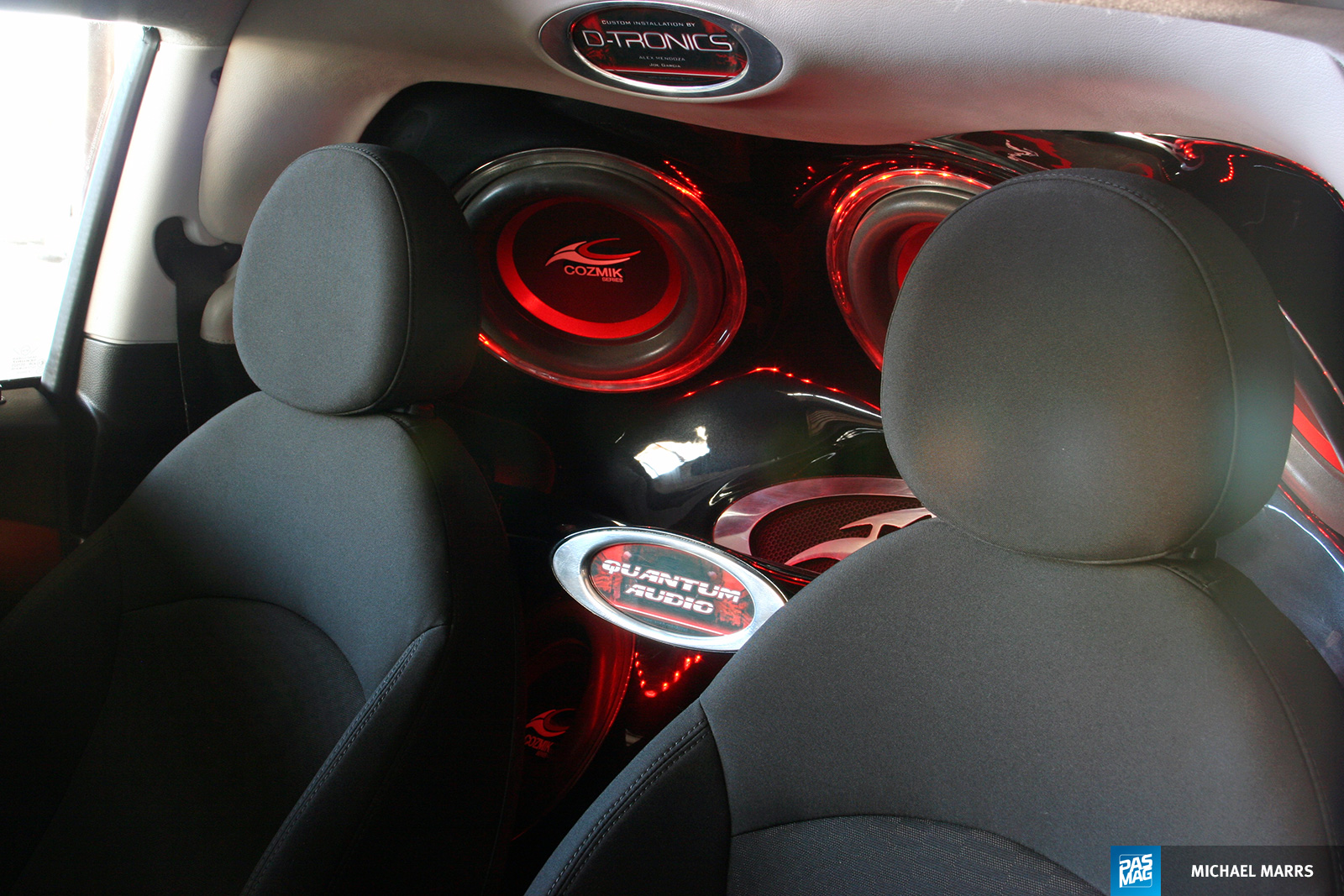 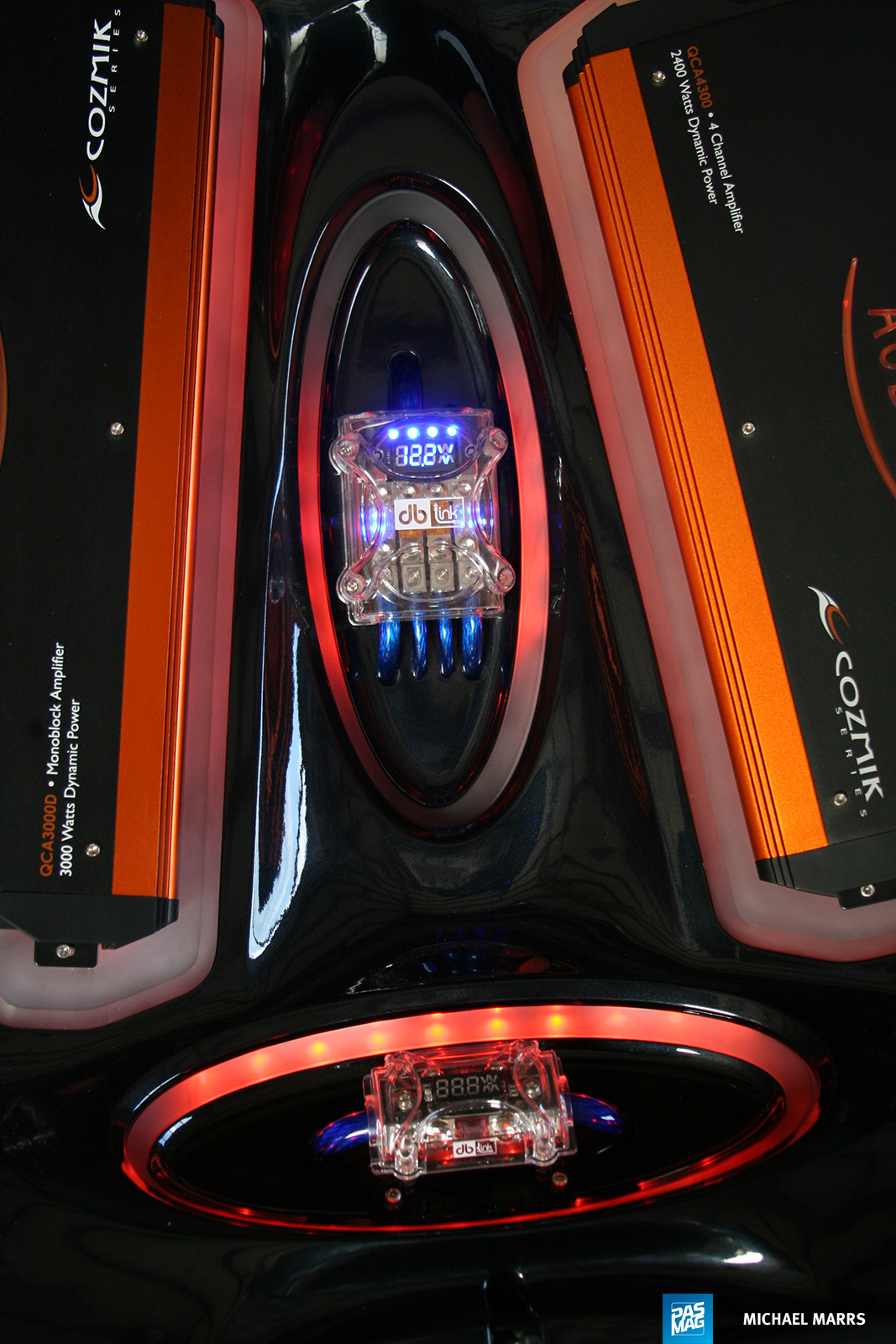 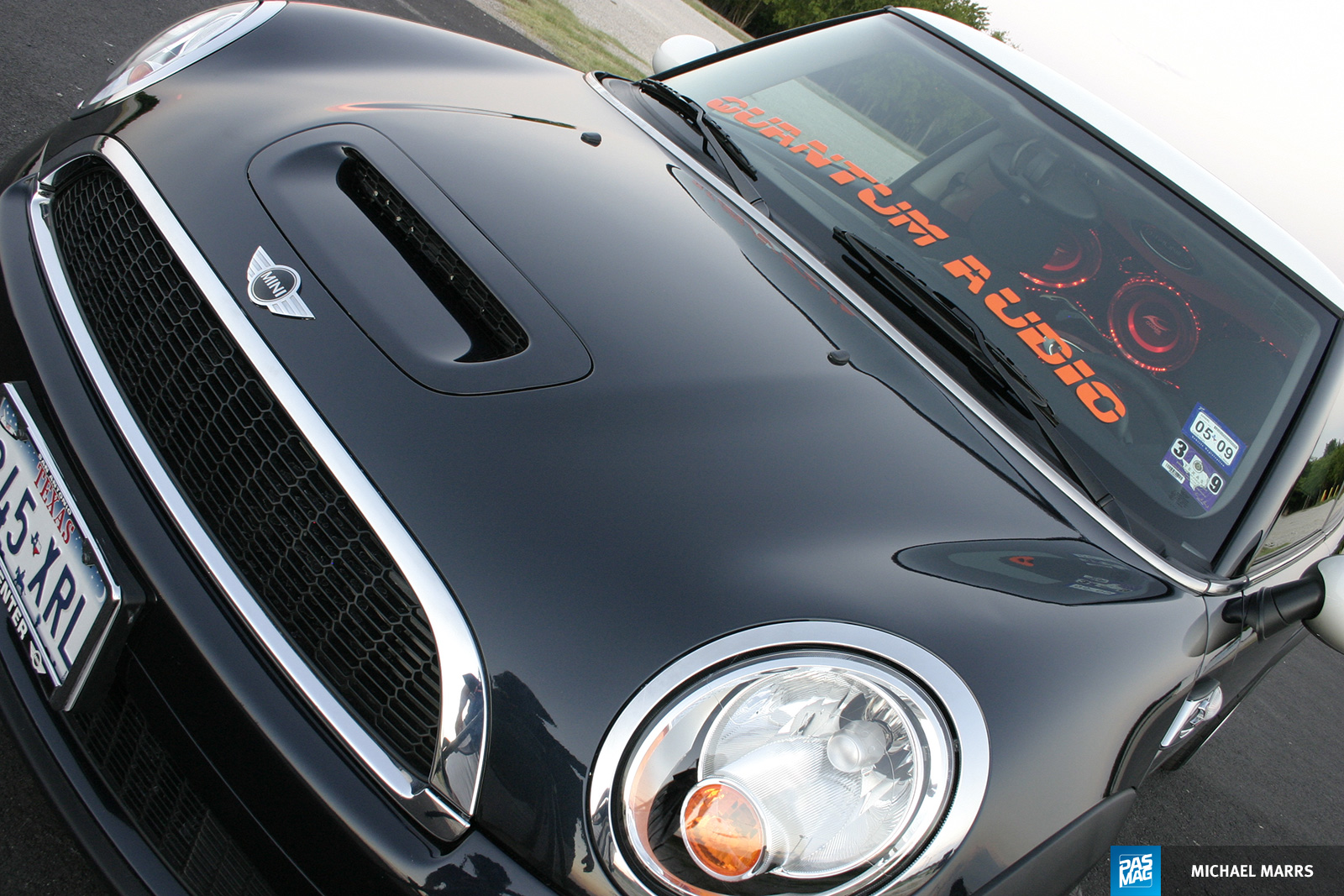 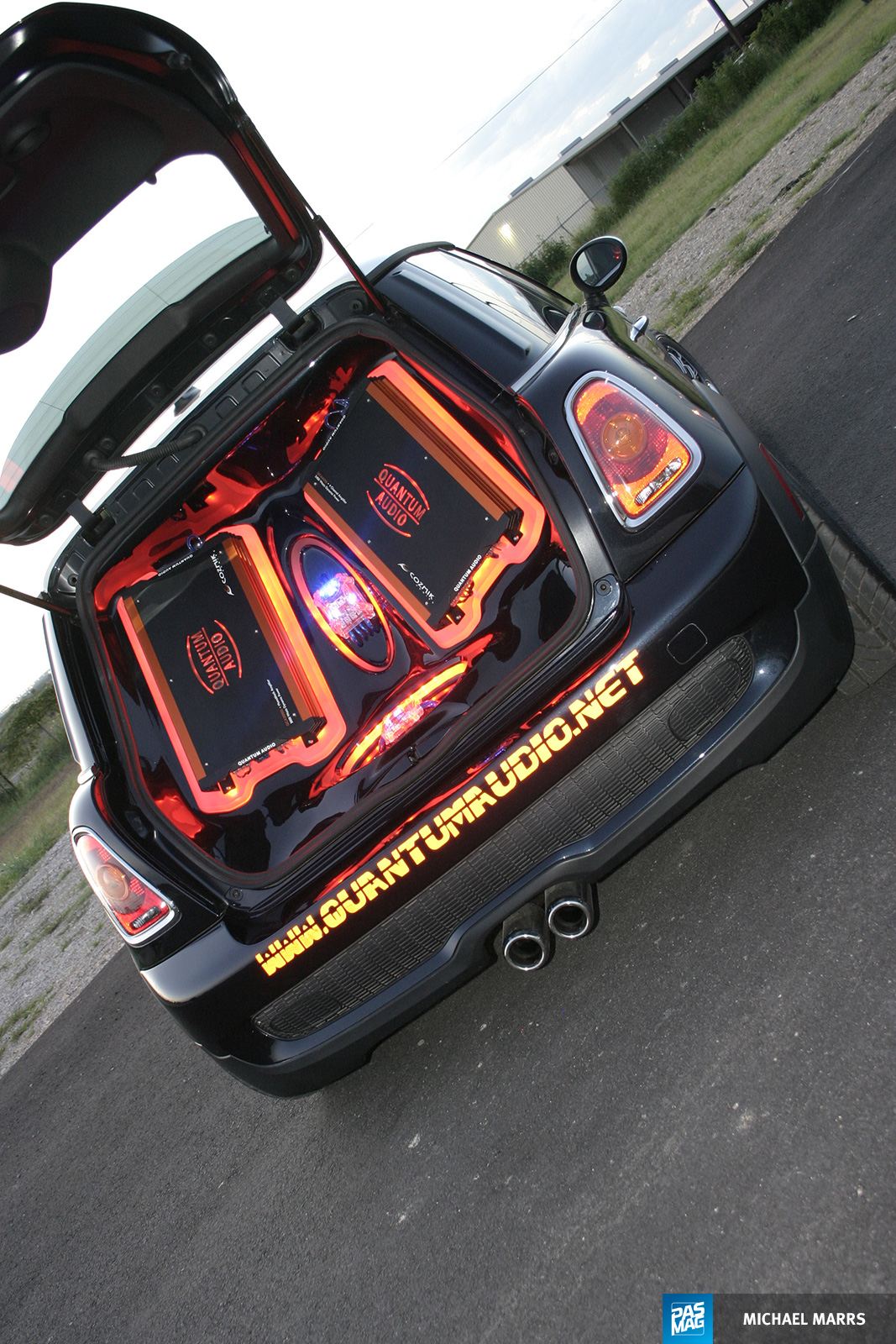 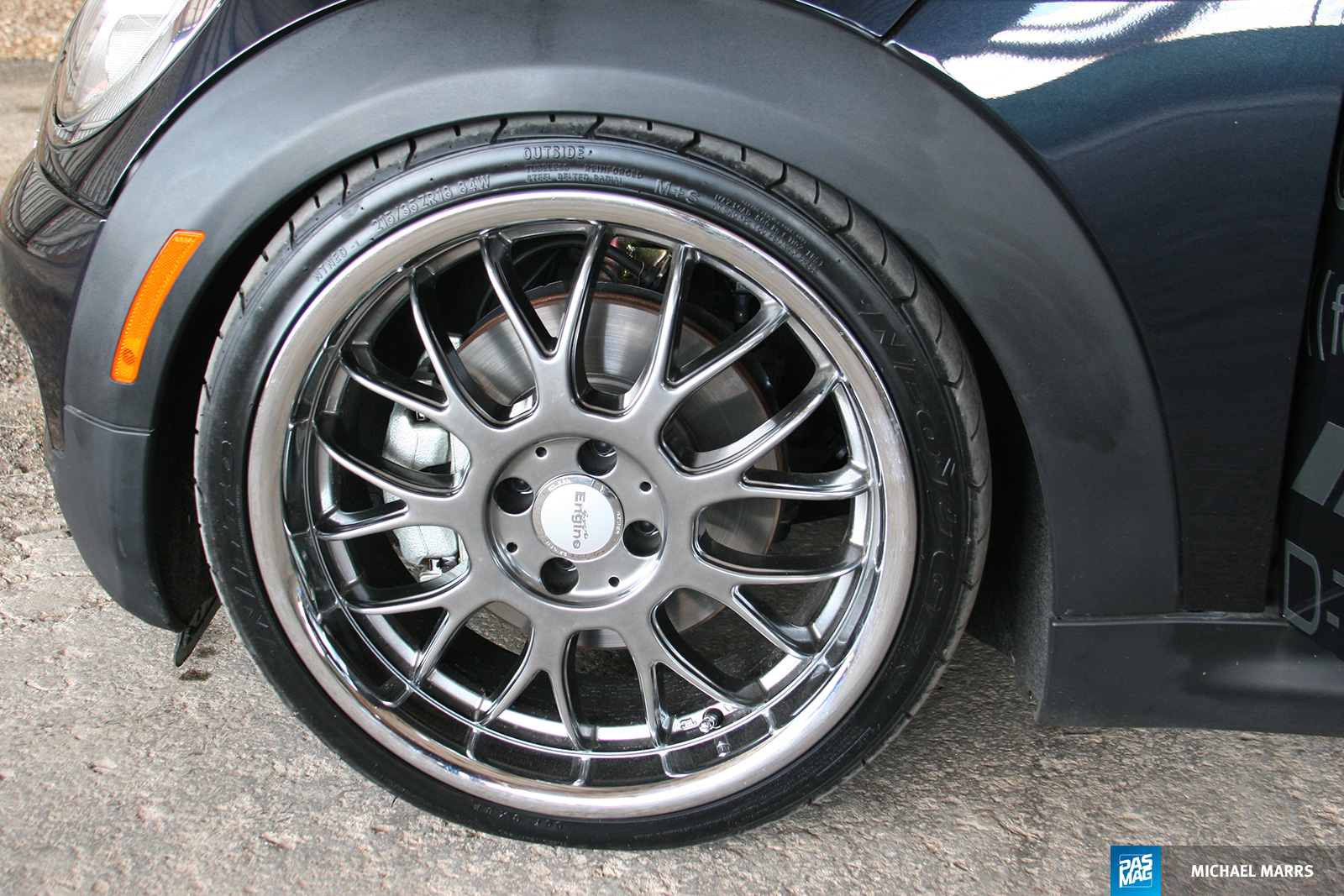 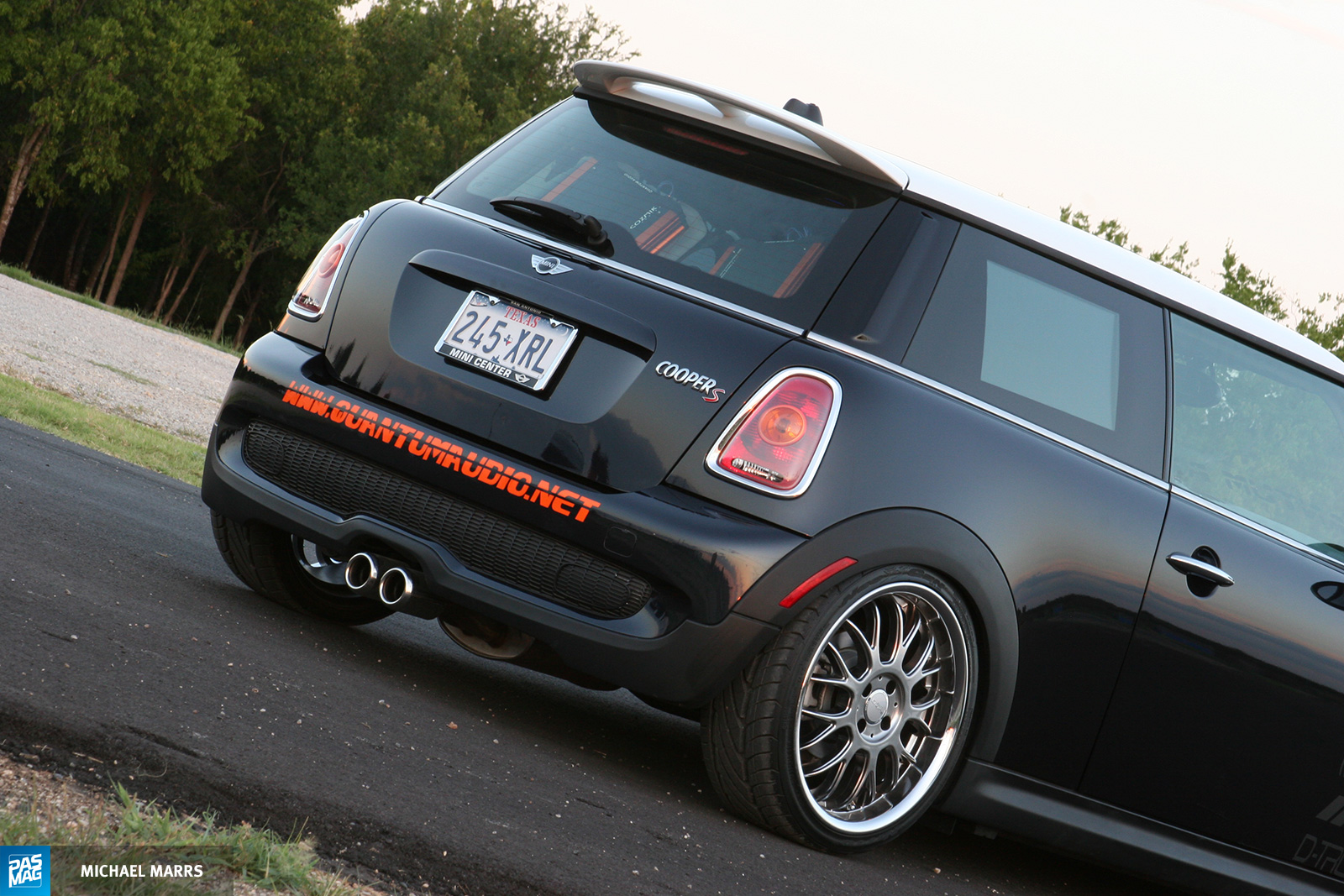 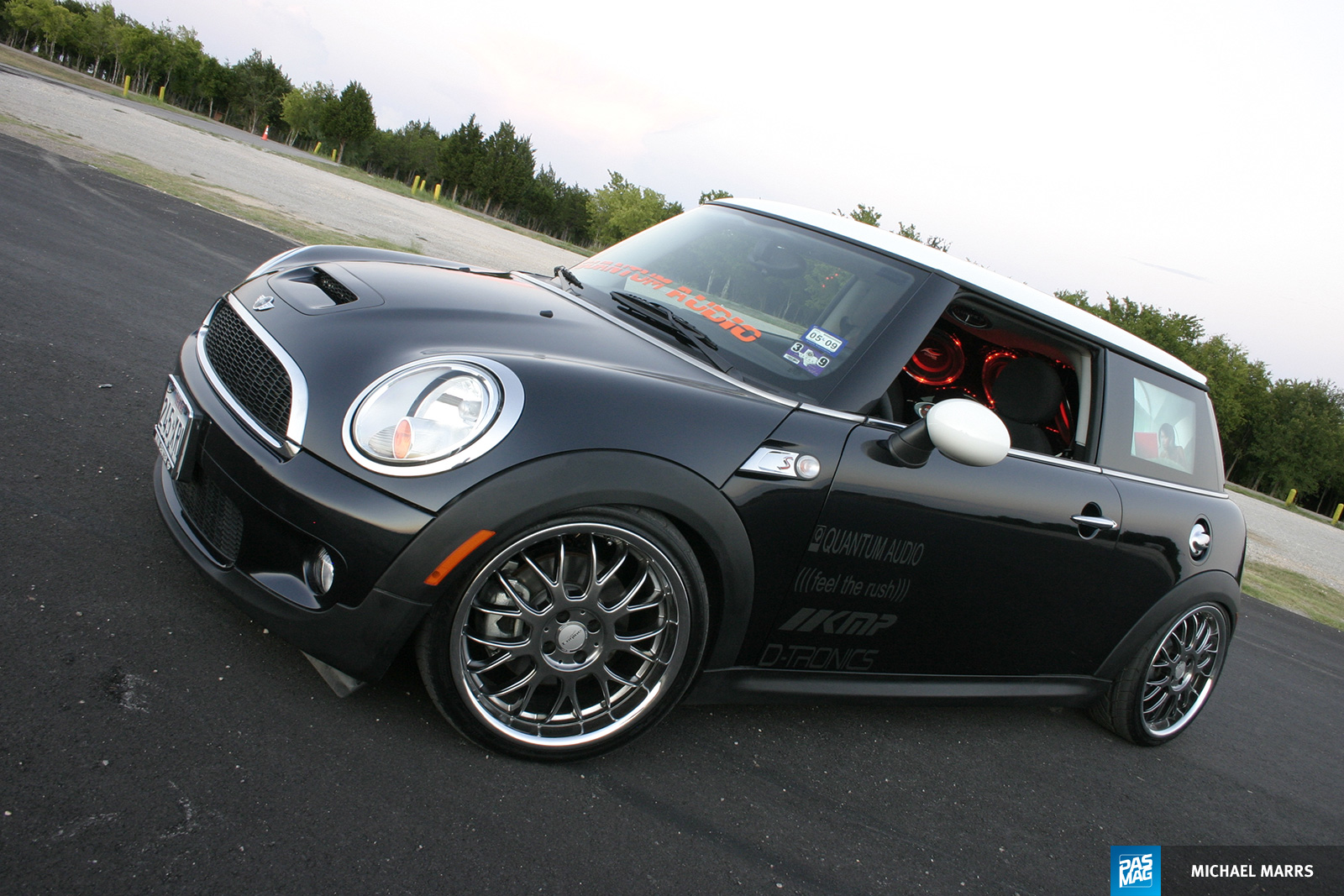 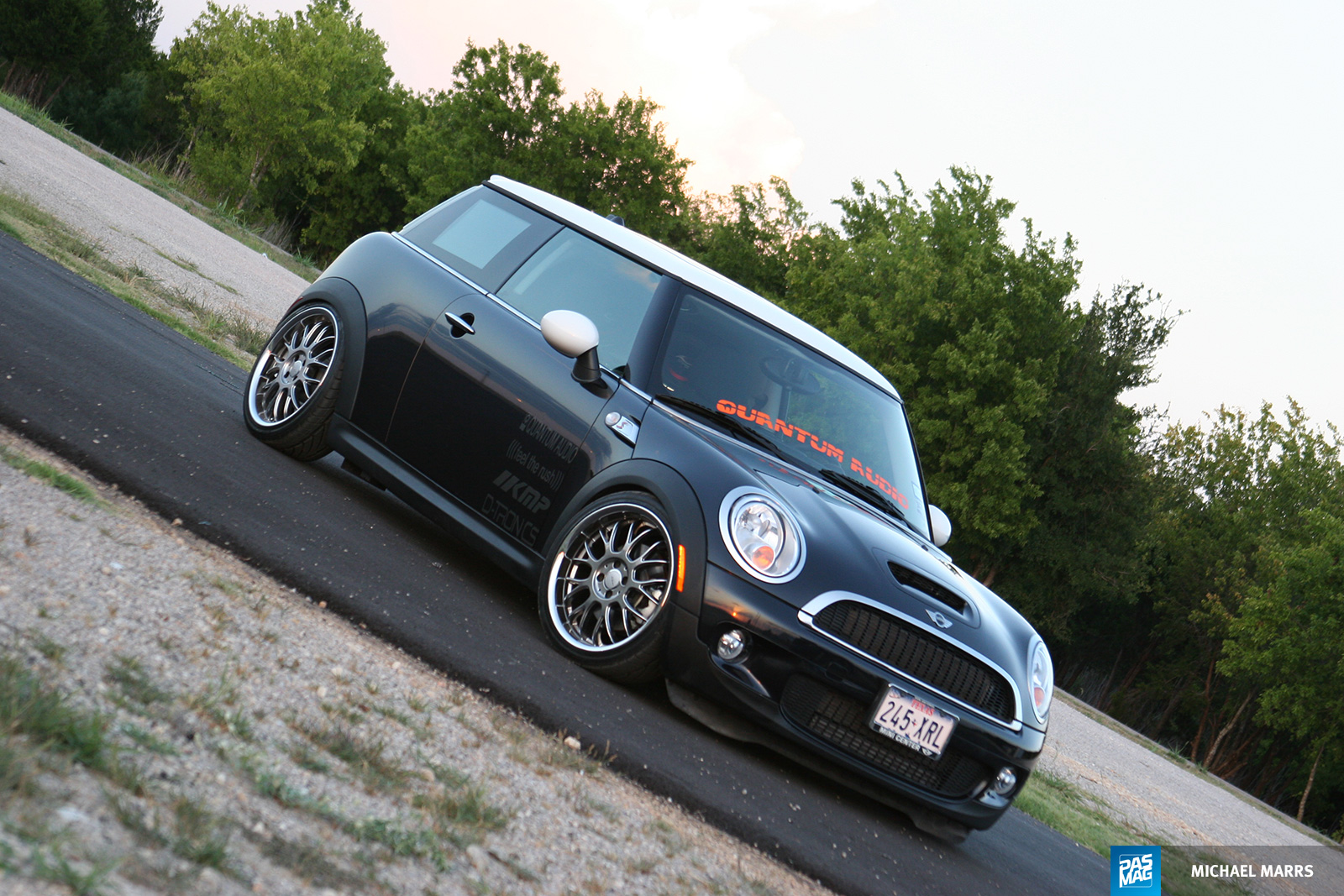 Furious Z: Ryan Hunt’s 2007 Nissan 350Z
Photography by Christopher James (chris_vq) Nothing is as good as the original - Fast and the Furious that is. If you ask Ryan Hunt, that is what...