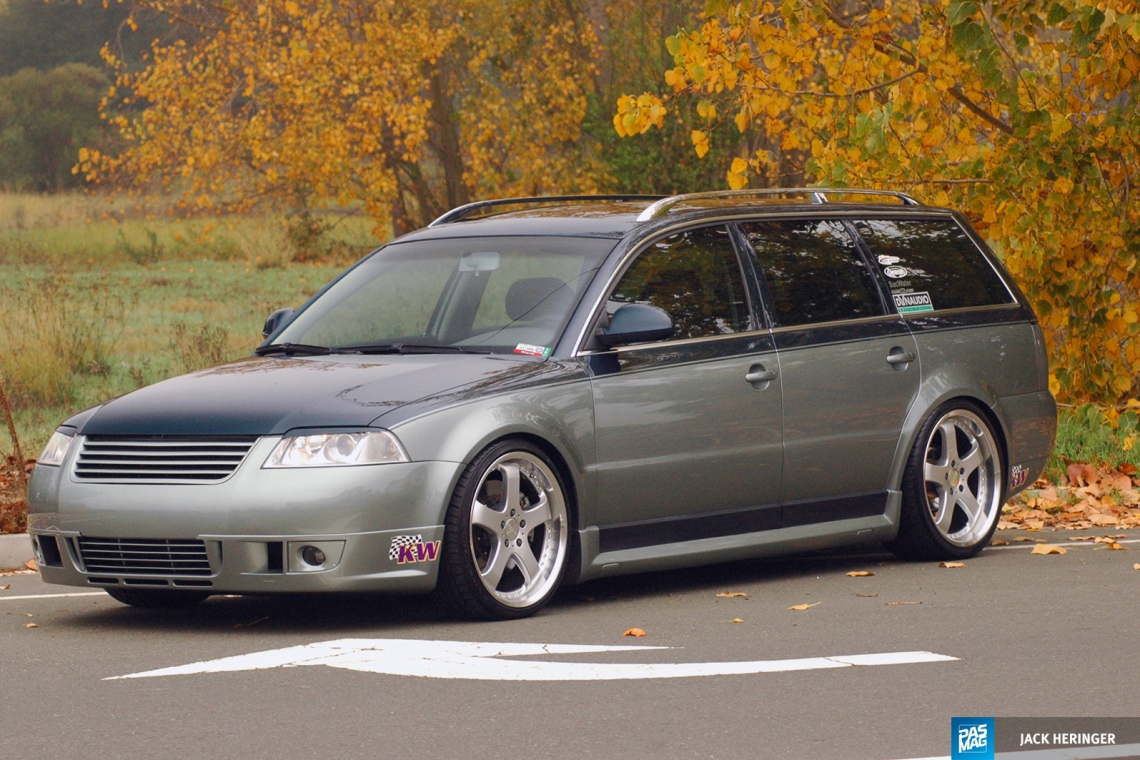 Normally, station wagons are used to load up groceries or haul the kids to school and soccer games. Sought out of necessity, these beloved wagons are our last line of defense before reaching minivan territory – a segment of the automotive market that most enthusiasts hope they never have to touch. Oozing practicality and sensibility, Paul Vina promptly dumped his Passat sedan in favour of the more spacious wagon version. But rather than keep the Passat plain as Jane, the USAF officer dropped a serious amount of coin to create one of the sickest wagons on the scene.

“I decided I wanted a Passat variant after owning my first Passat, a 1999 sedan,” says Vina, who is stationed at Beale Air Force Base in Northern California. “I got it for the extra cargo space after going on vacation to Disneyland and not being able to fit a statue I bought through the car’s trunk opening.” Though it took some massaging to fit the statue, it was clear that Vina’s days with the sedan were numbered. 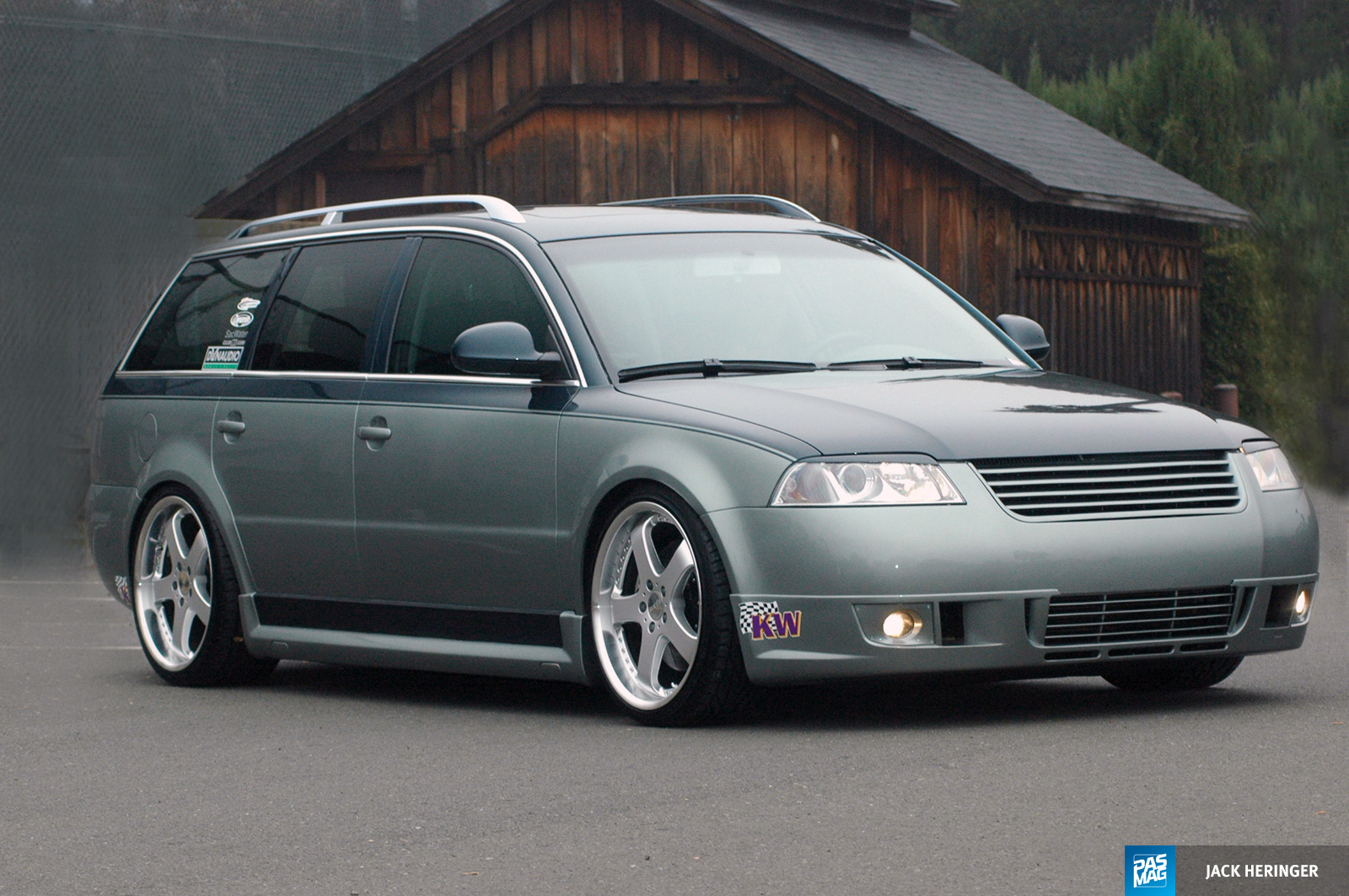 With a history of building some awesome autobahn burners like a 1995 VW Jetta and the aforementioned 1999 Passat, it wasn’t long before Vina put his newly-acquired 2000 VW Passat wagon under the knife. “It was only shortly after I purchased the variant had I decided to get a system in the car,” claims Vina. “While working with Fred Lynch (my friend) on another car, we planned this one out and it snowballed from there.” Upon closer inspection of the car’s system, it seems that ‘snowball’ isn’t the proper term to describe it, as I would much rather prefer to use the term ‘avalanche.’

If the name Fred Lynch sounds familiar, it’s probably because he sits high atop the corporate ladder at ARC Audio. Lynch didn’t hold back when it came to helping out his long-time friend Vina, as the two envisioned the Passat to be a rolling showcase of the latest ARC Audio products. However, the dynamic duo was faced with quite a challenge, as Vina was determined to retain the added storage space offered by the wagon, yet still yearned for a sick system. 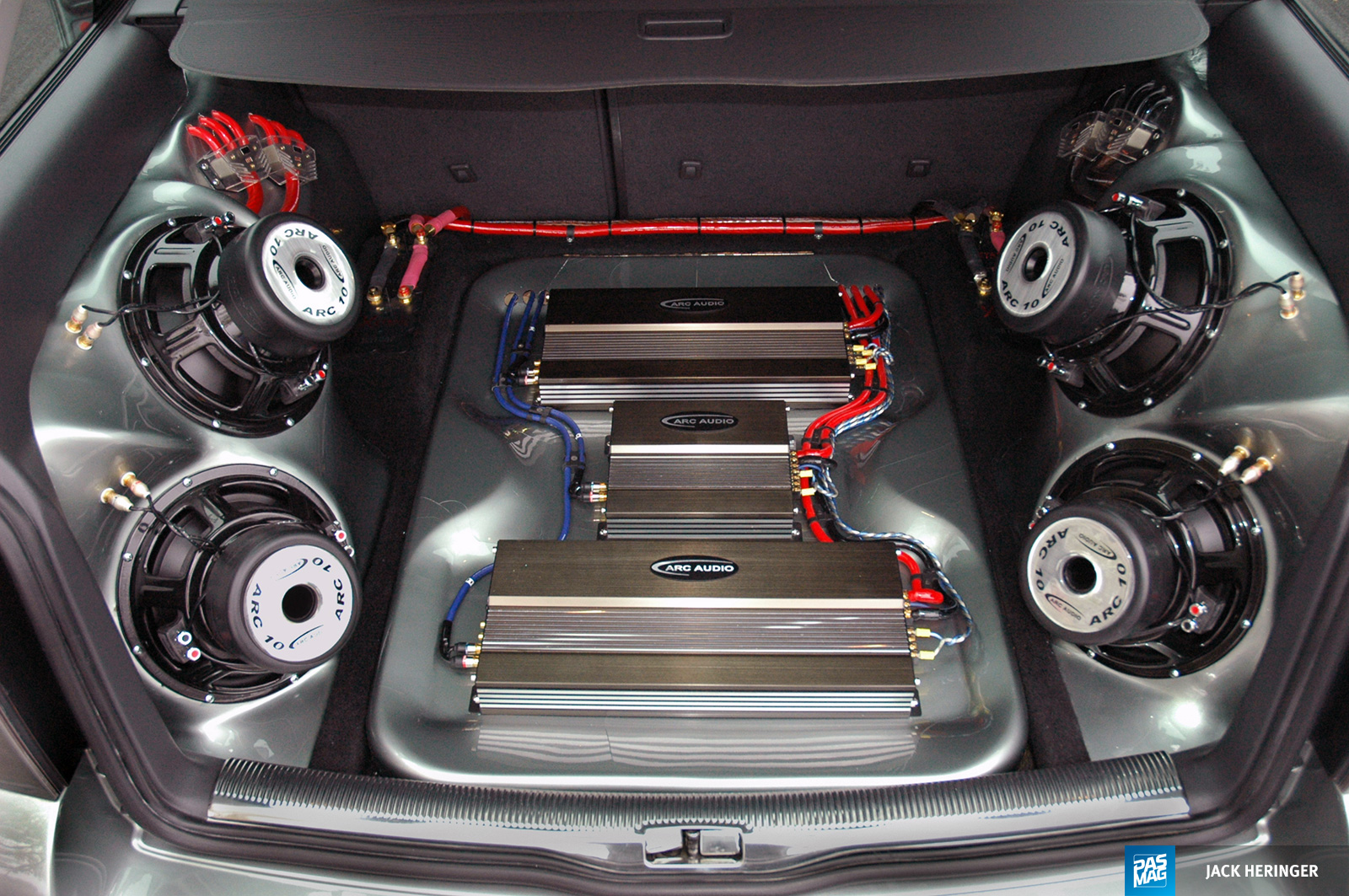 A trio of amplifiers sits in a fibreglass enclosure on the trunk floor, powering the 10 speakers located throughout the cabin. An ARC Audio 4150XXK amplifier powers the Dynaudio MW160 and MD140/2 that reproduce the midbass and midrange, as well as the Dynaudio MD100 tweeters mounted in the custom kick panels in front. An ARC Audio 4050XXK amplifier takes care of the Dynaudio System 240GT speakers that provide rear fill. Bringing the pain is a quartet of inversely-mounted ARC Audio 10D4 10-inch subwoofers in custom enclosures, flanking the amplifiers (including the Arc Audio 2500XXK that powers them) in the centre. All in all, Vina and Lynch were able to successfully design a multimedia system that only occupied 20% of the Passat’s storage area. 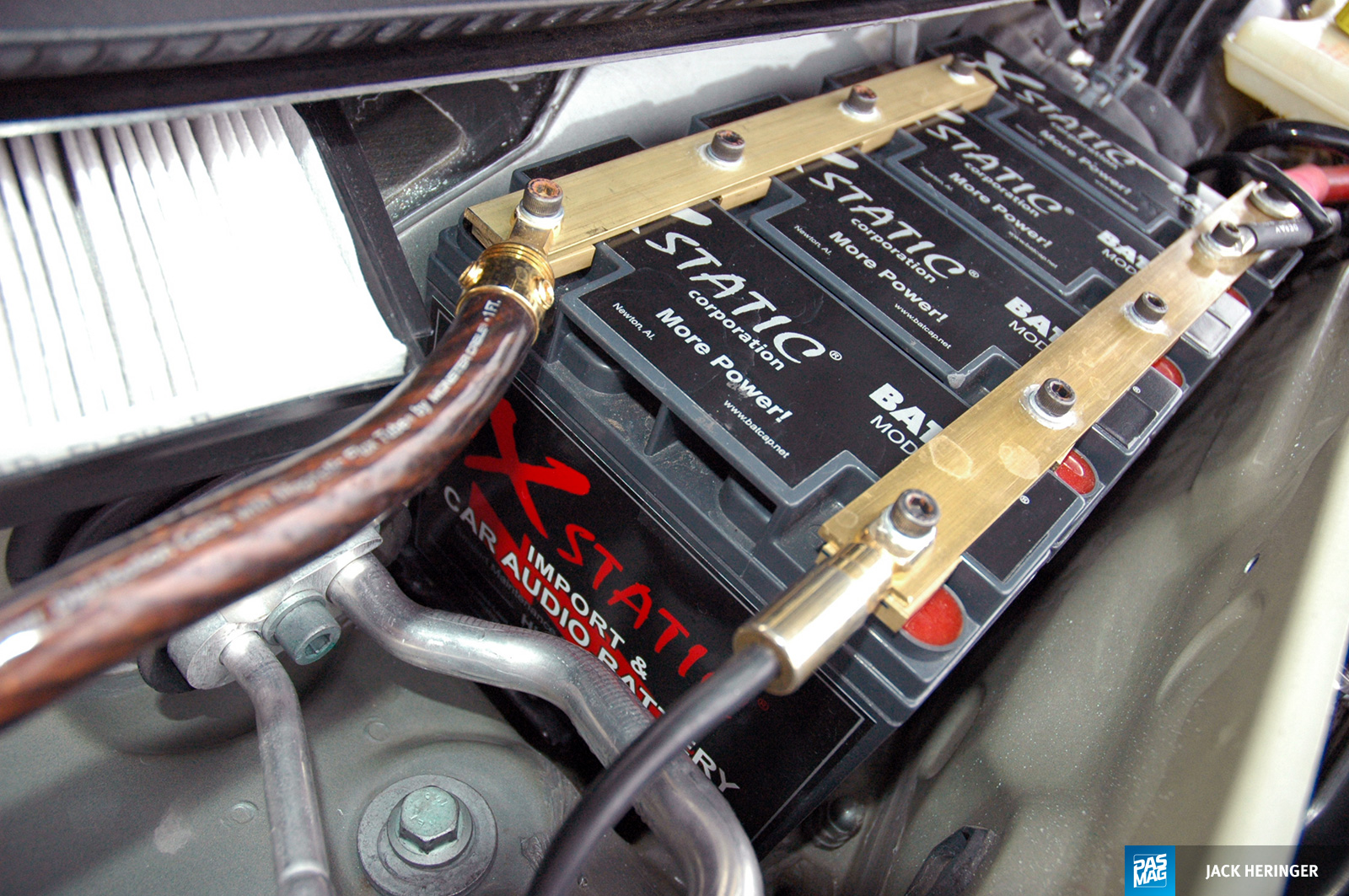 Linking everything together is a variety of Monster Cable products, including the front fuse holder and distribution blocks. Monster Cable wiring helps ensure that signal distortion is kept minimal and the juice from the four BatCap 400 batteries flows smoothly throughout the system. 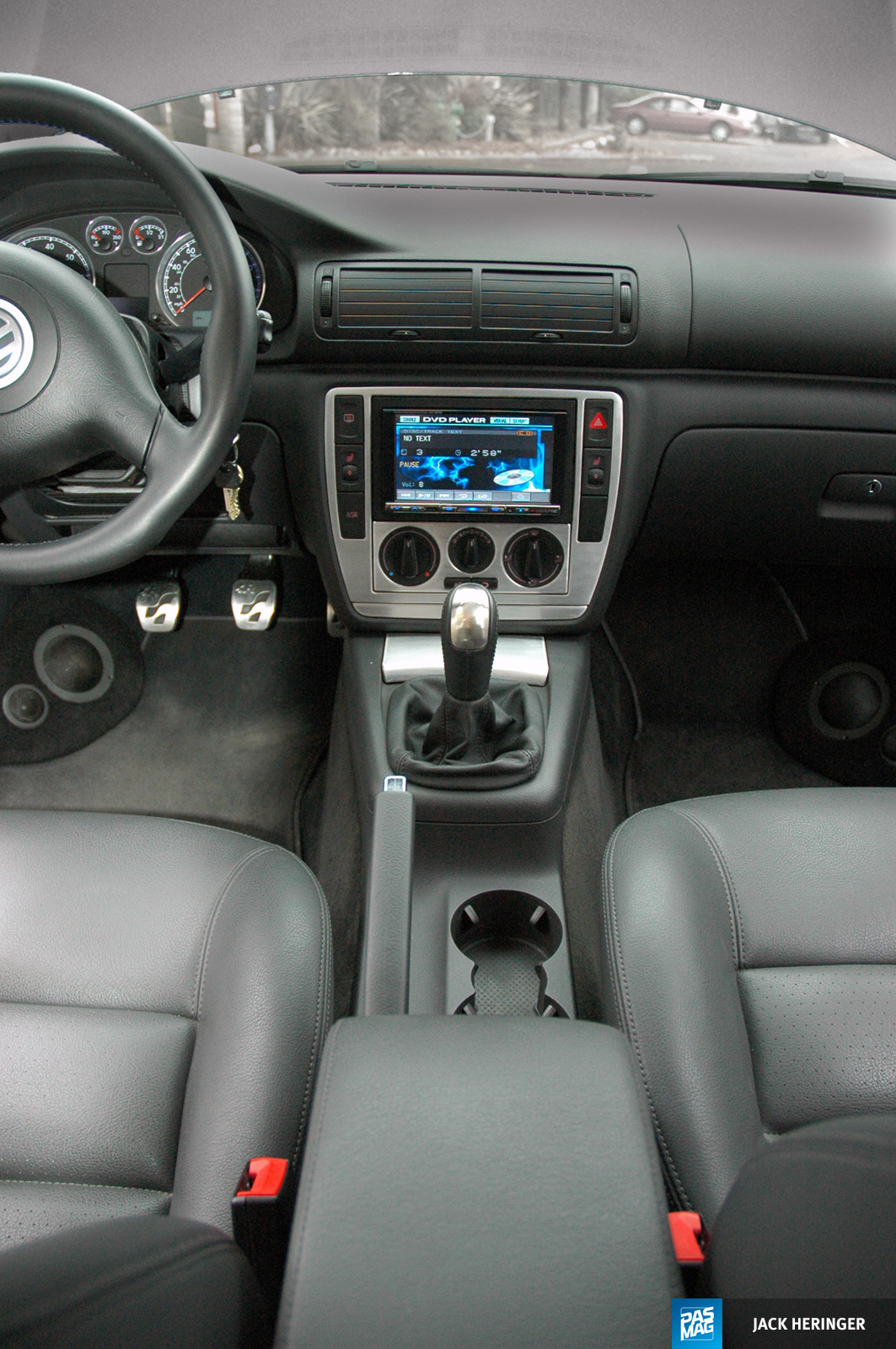 Fine tuning for this collection comes via the ARC Audio XEQ equalizer and ARC Audio IDX crossover. A Kenwood DDX-7017 head unit acts as Vina’s control centre, playing the contents of his favourite CD or DVD. 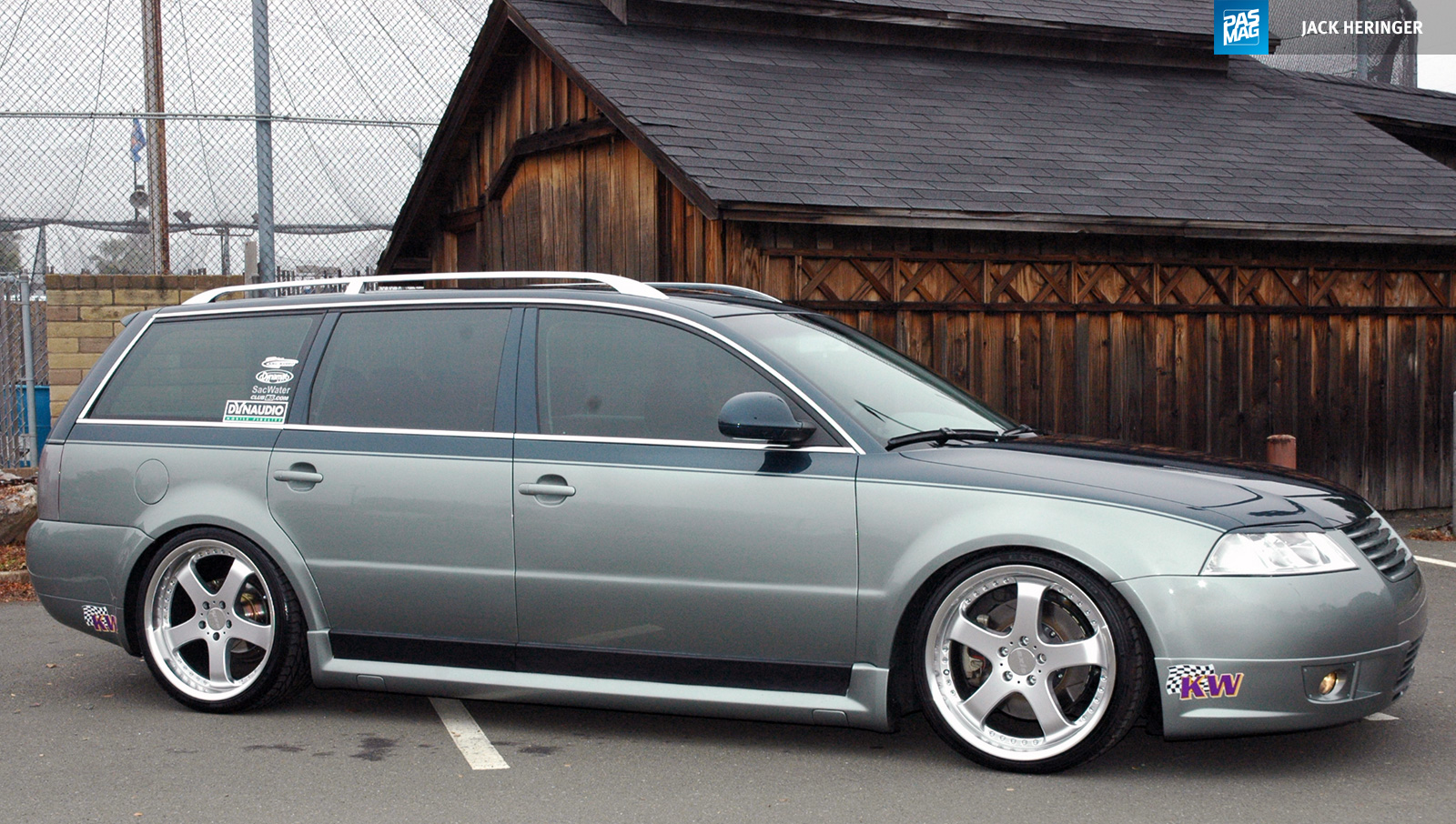 However, Vina’s ride is much more than just mobile audio and video, as this euro tuning fanatic wanted to add some style to the wagon as well. The aesthetic additions match Vina’s personal style, as he opted to piece together his own kit. A Zender front lip, JOM grill and Kamei upper eyelids dress the Passat’s front fascia. Votex side skirts add aggressiveness to the side profile, while the rear end gets treated to the Votex spoiler and Mattig hatch blend. Curtis Pruitt was enlisted to work his magic on the body and shaved the door impact strips and antenna. He also sprayed the car with a two-tone paint job, using the factory Stonehenge Gray up top and Audi A3 Murano Green Pearl on the bottom. The five coats of colour are protected by eight layers of clear coat, giving the Passat an incredible finish. Additional exterior modifications include the colour-matched OEM taillights, MkV GTI rear wiper arm and Passat W8 chrome roof rails. 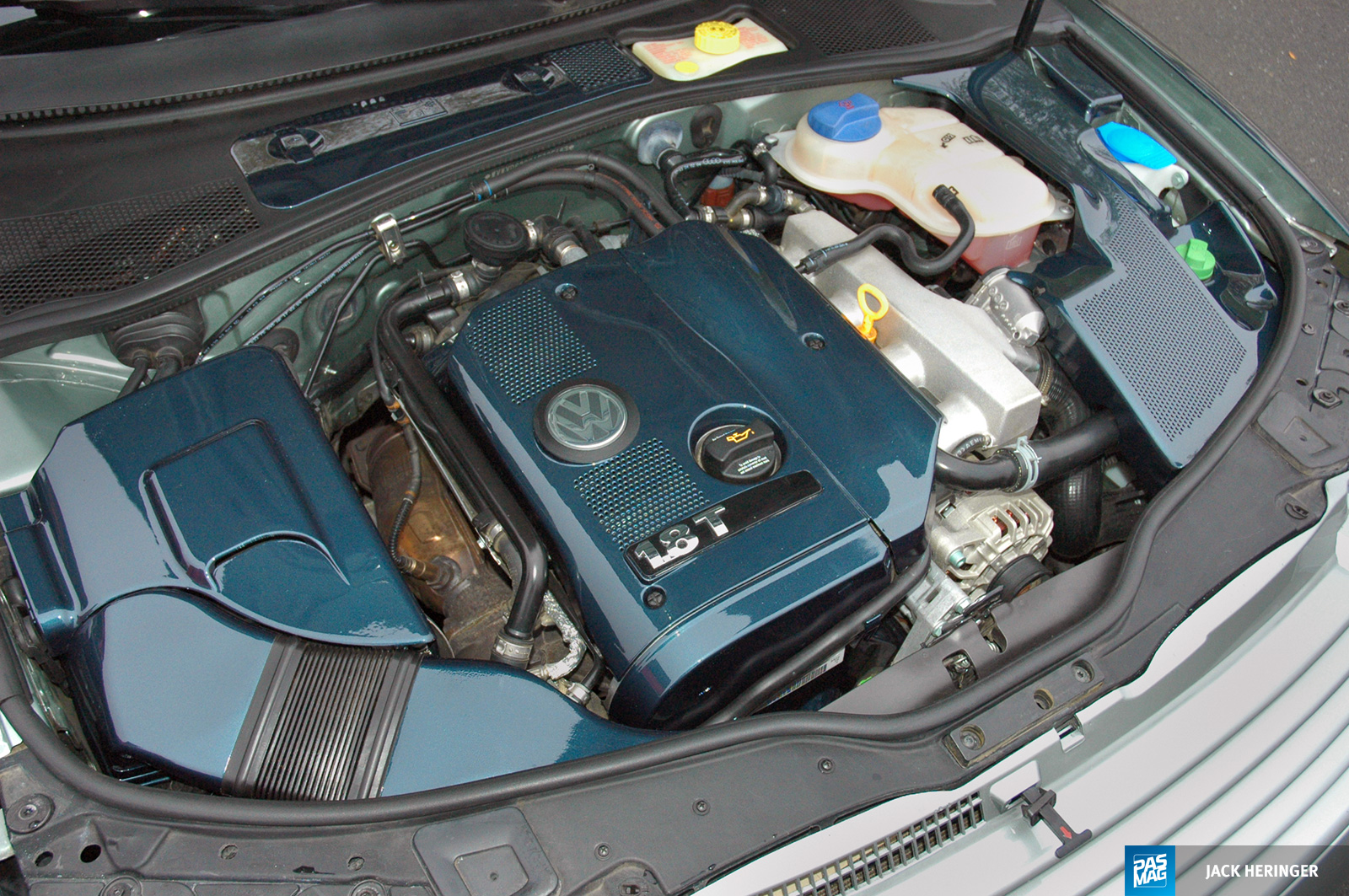 Vina’s Passat is motivated by VW’s 1.8T powerplant that’s the Euro market’s answer to Honda’s B-series motor. Highly responsive to modifications, he improved the performance of the 20V motor with an upgraded exhaust system featuring a Techtonics Tuning down-pipe, Random Technologies cat and Magnaflow muffler. Under the hood, Vina had his friends at Neuspeed in Camarillo, CA install the Forge 007 diverter valve to accommodate the added boost pressure. 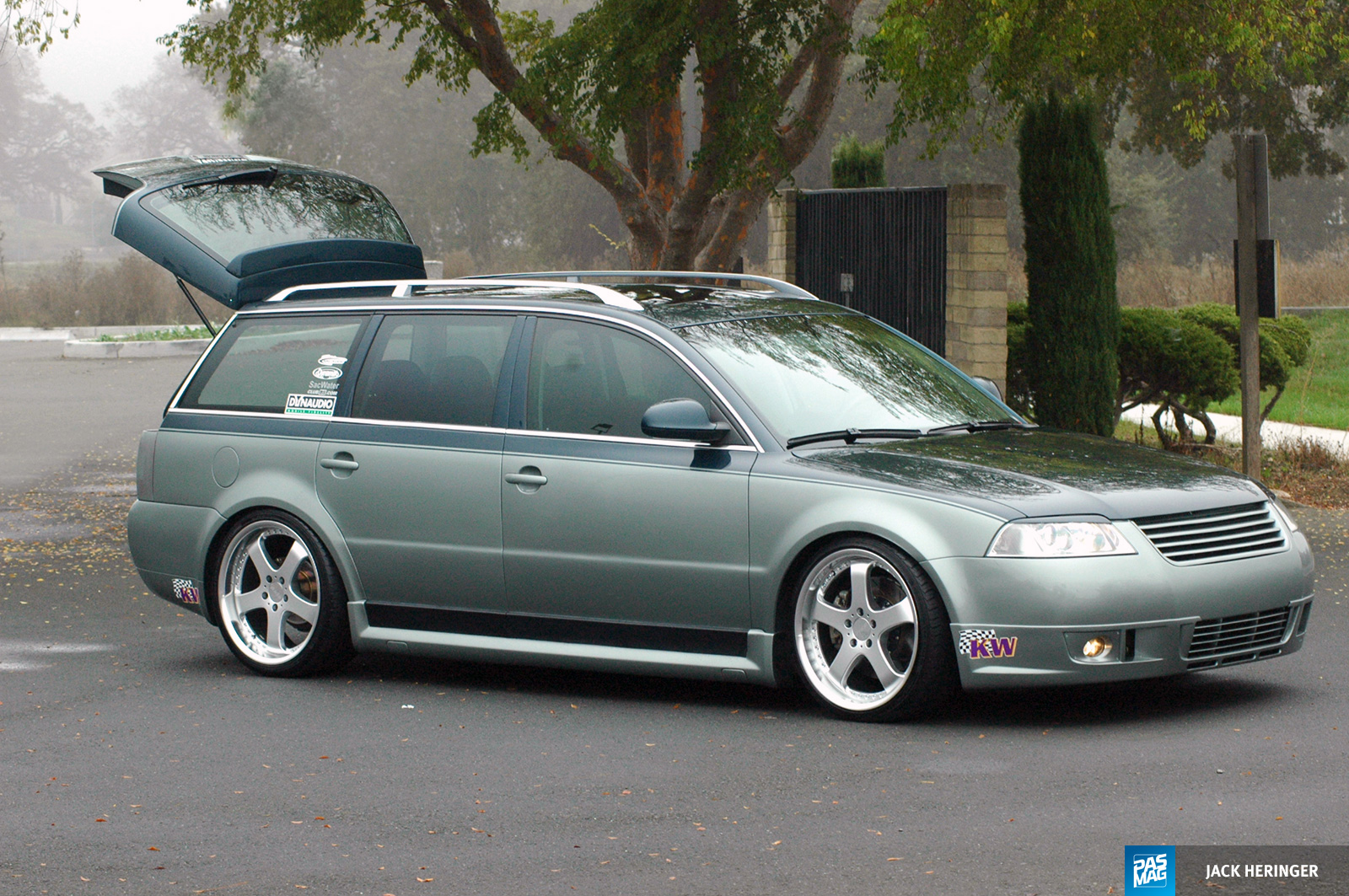 Massive Axis Milano wheels fill the Passat’s fenders, as the 19- x 8.5-inch (front) and 19- x 9.5-inch (rear) five-spoke rollers surely turn the heads of his fellow USAF officers. Wrapped in General Exclaim rubber sized at 225 / 35 in front and 265 / 35 in the rear, this wheel and tire combo gets Vina from point A to B in high style.

To help the Passat shed its wagon handling characteristics, a set of Neuspeed Sport springs wound around Bilstein dampers was slipped into the wheel wells. A Pure Motorsports strut brace was bolted between the strut towers up front, while Custom Performance Parts adjustable upper control arms further dial-in the suspension. 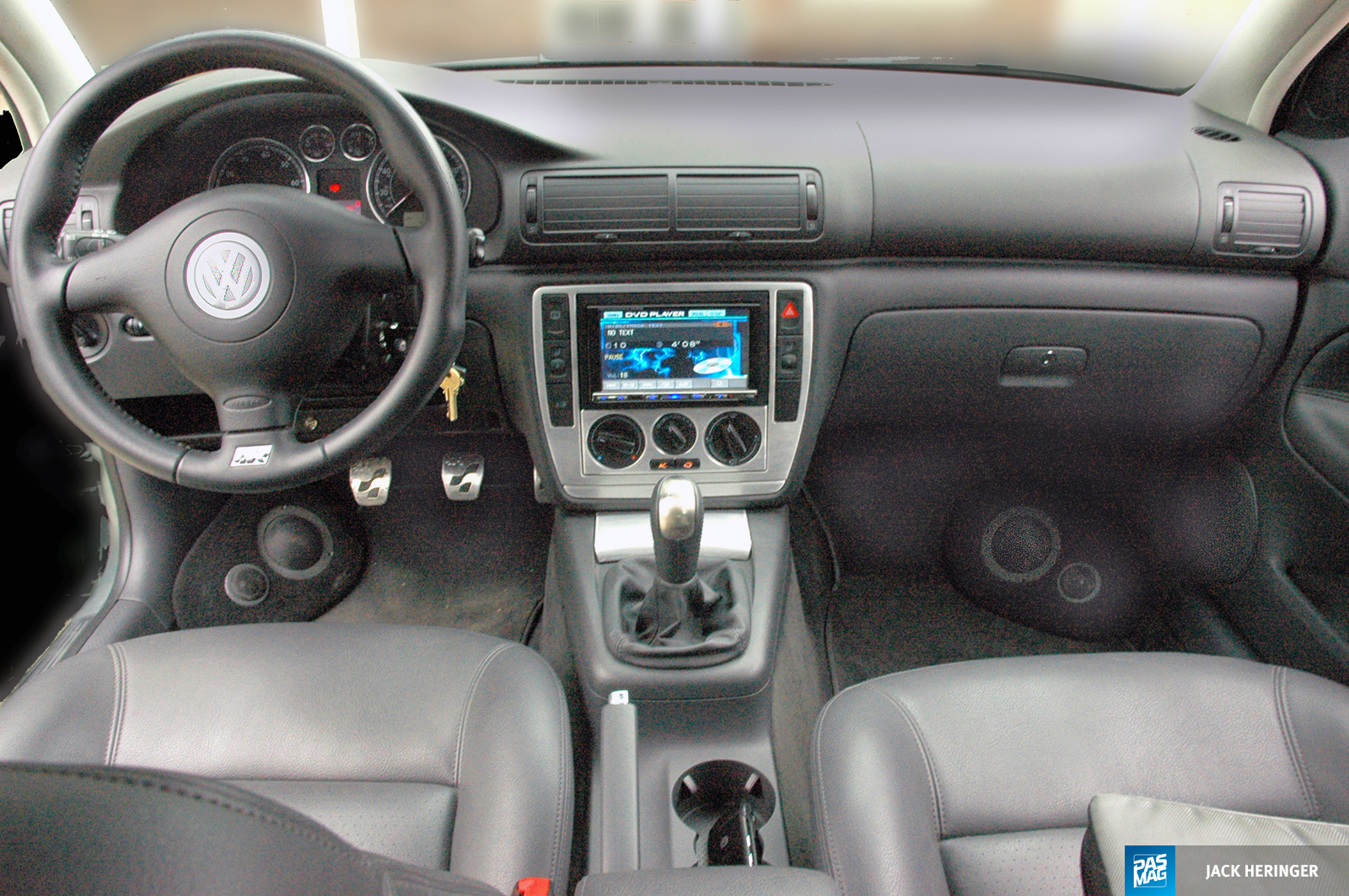 The cabin was given a race-like feel courtesy of the euro market sport option interior trim, which was stripped down to its aluminum base, brushed and finally clear coated. Brushed aluminum door pins and pulls from a 2005 Jetta GLI were also added, while a Skoda Superb shift knob and boot replace the OE pieces. An R32 steering wheel provides Vina with added confidence when cutting into the corners.

The completed project has already built quite a reputation, taking home awards from events like Dubwars, Bugorama and the Annual VW Downtown show. Vina would like to extend his heartfelt thanks to everyone involved with the build, including ARC Audio, Dynaudio, Dynamat and Monster Cable. PAS would like to especially thank Vina for not only building one incredible Passat, but also serving his country. Keep an eye out for the Passat at select events in Northern California next year. 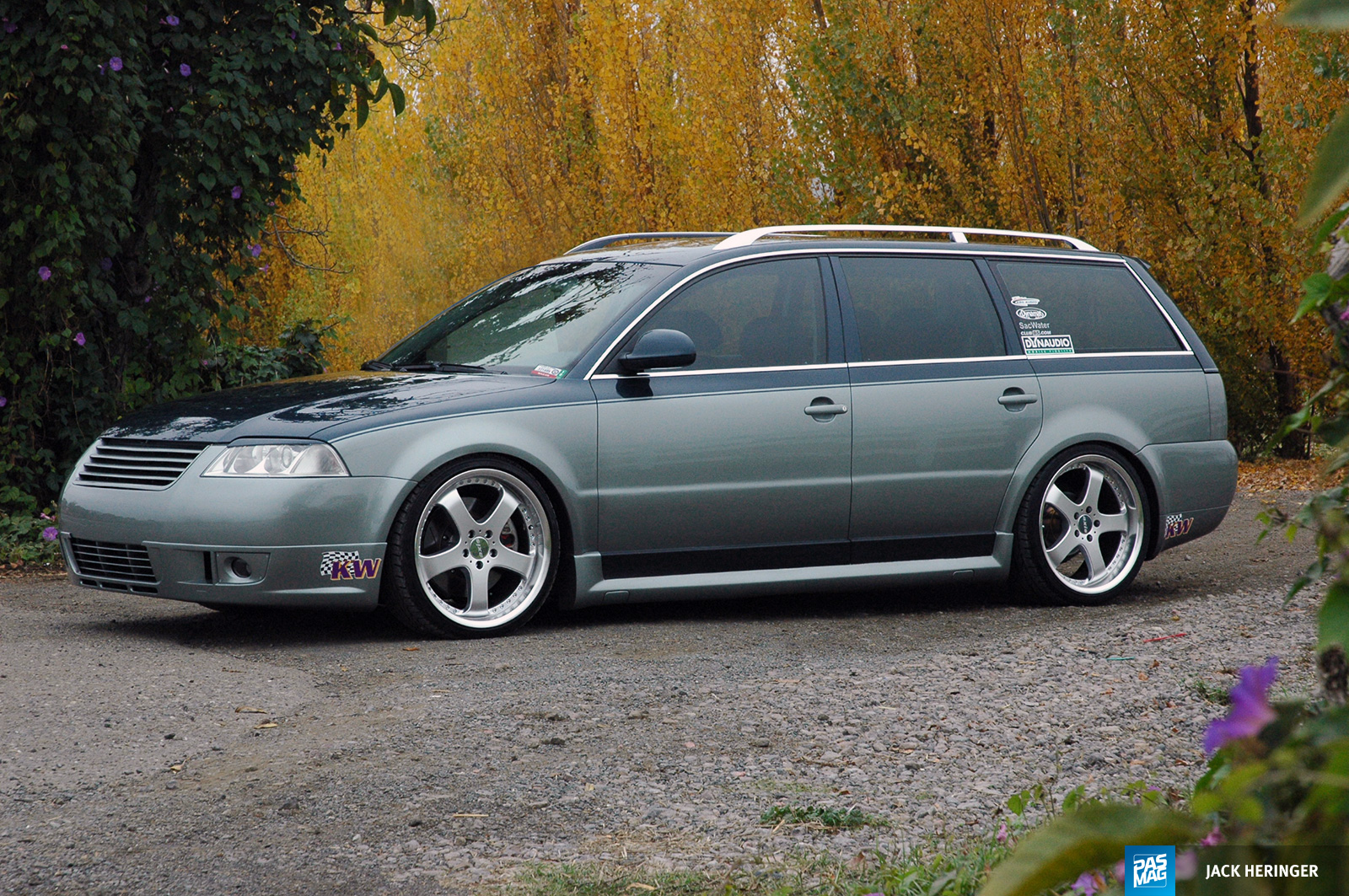 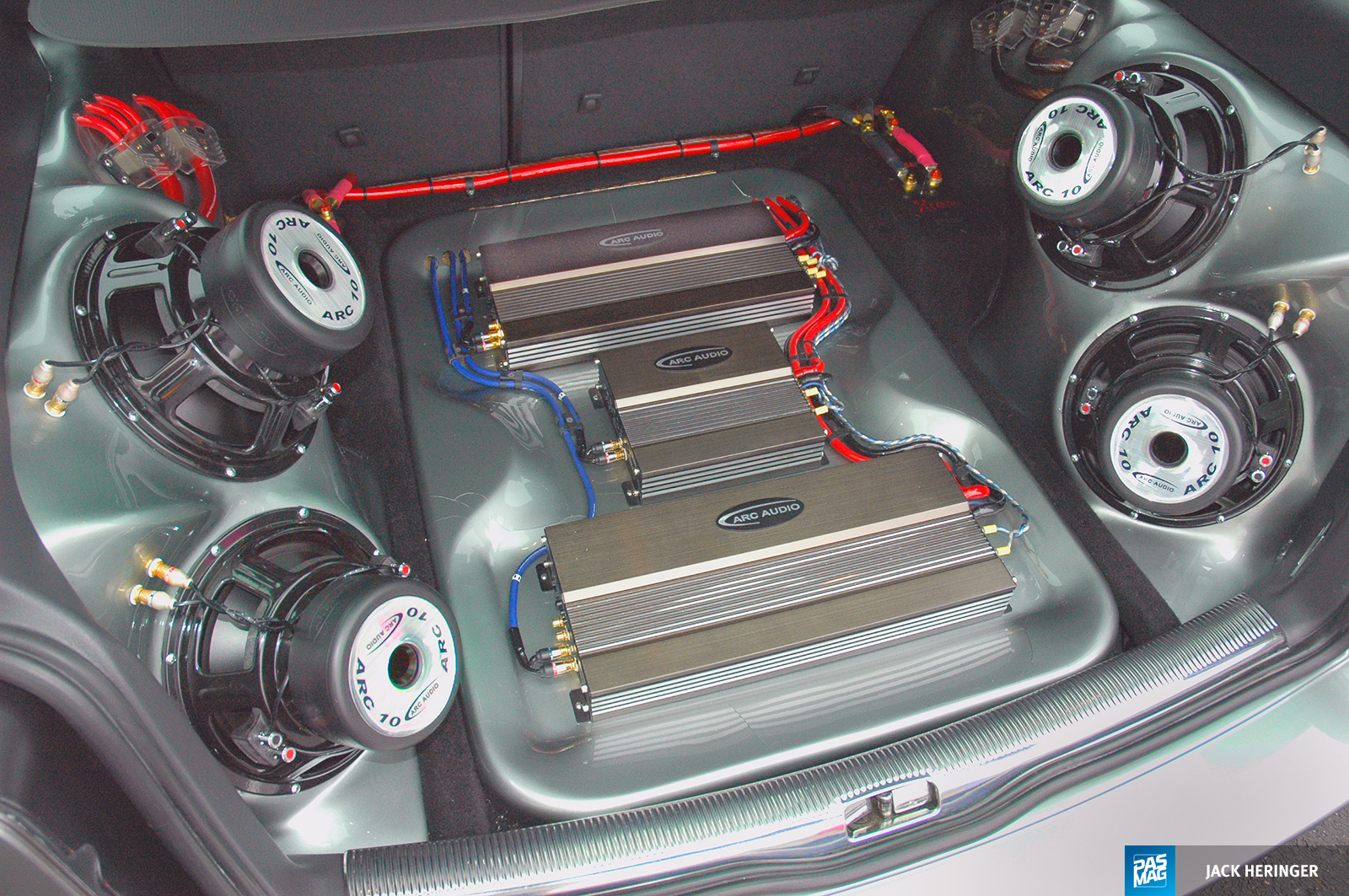 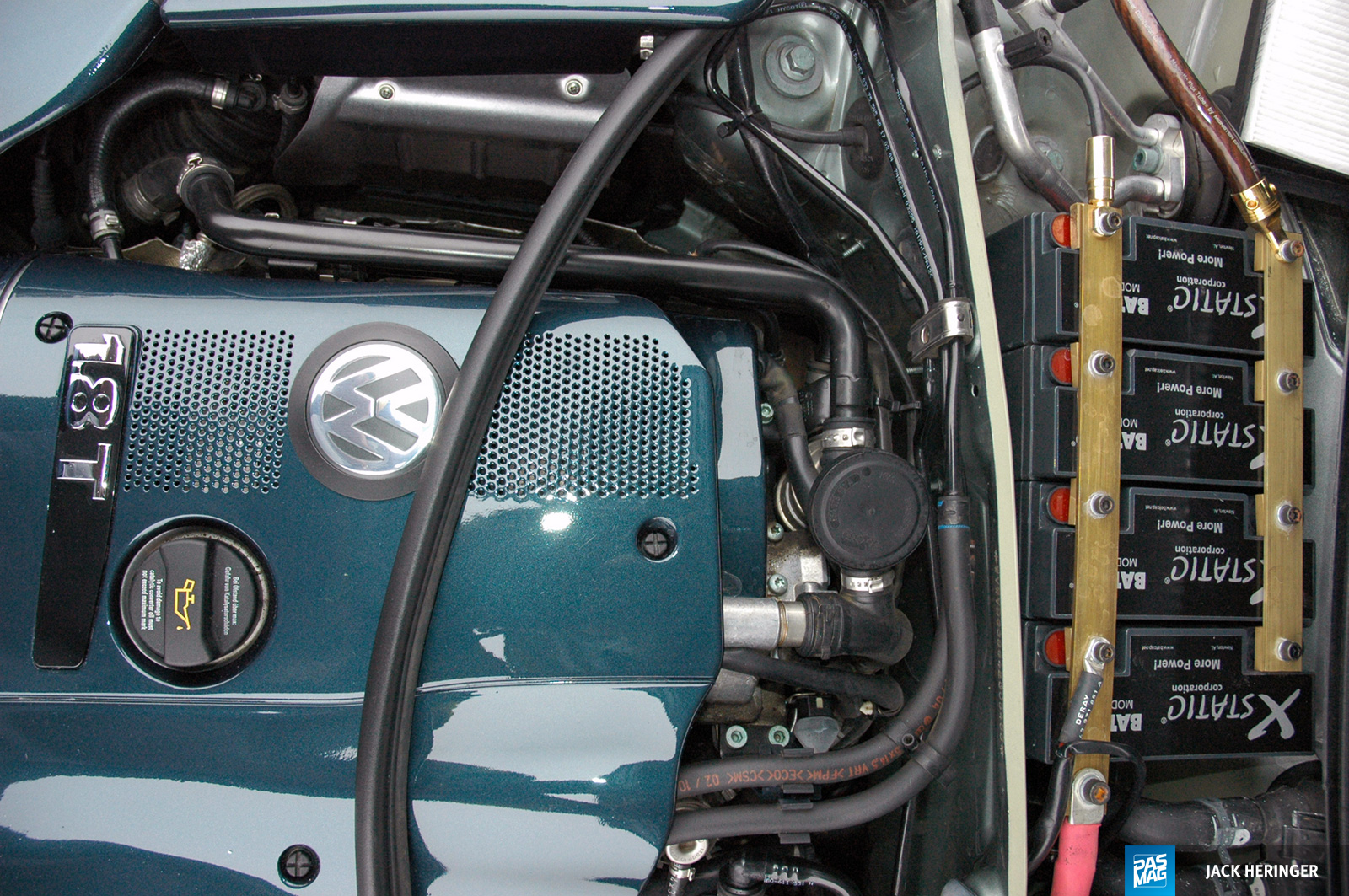 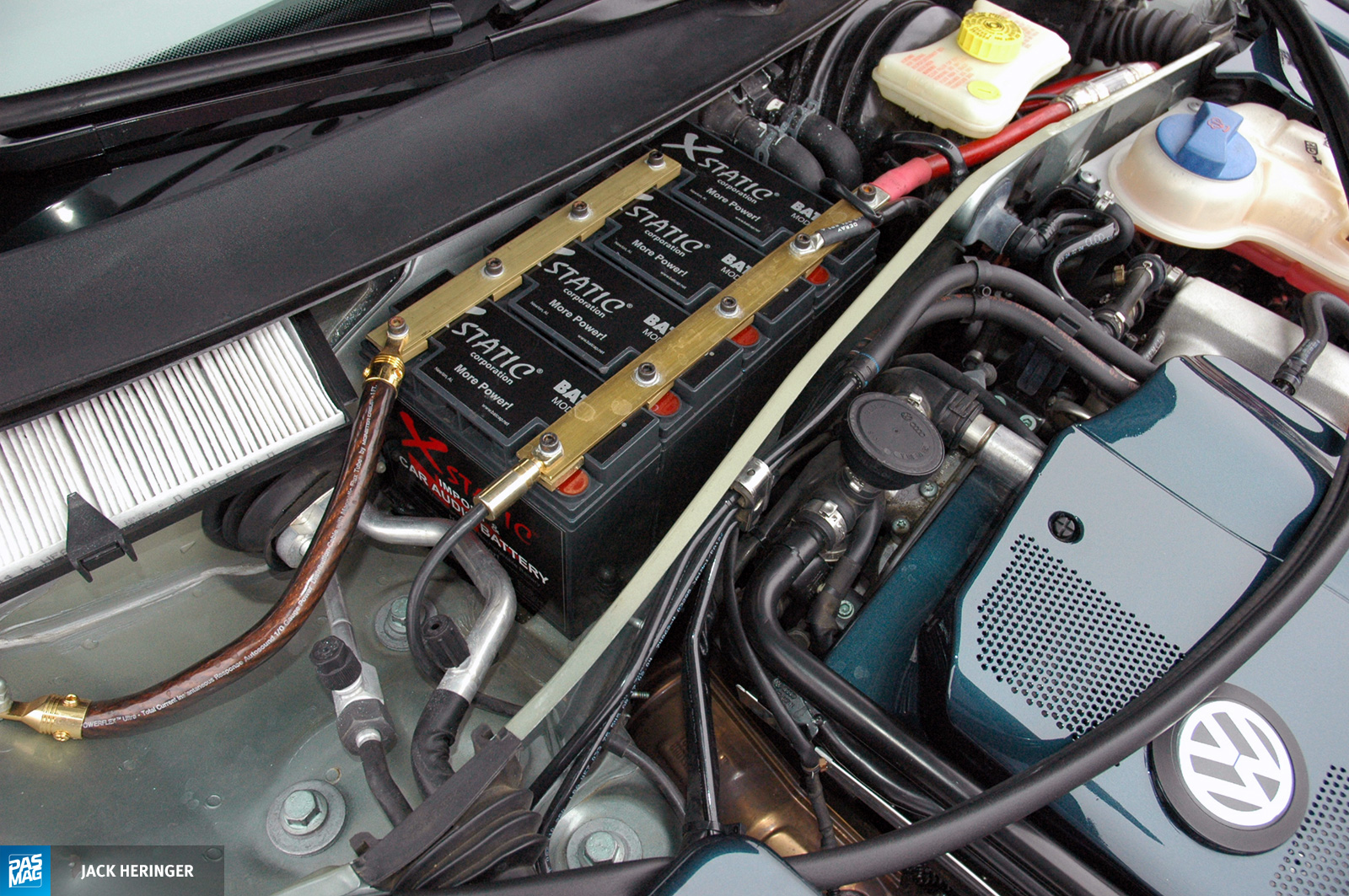 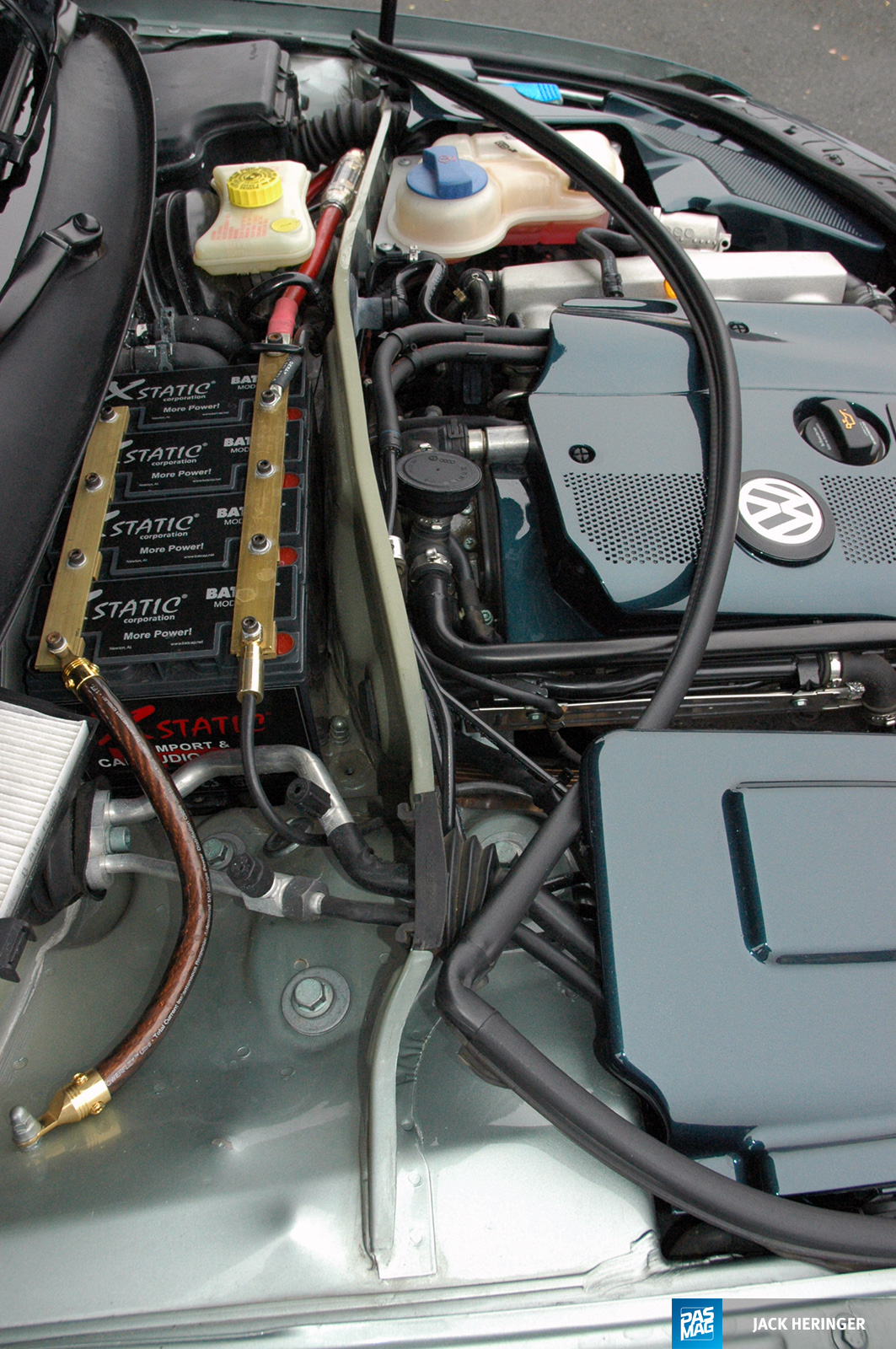 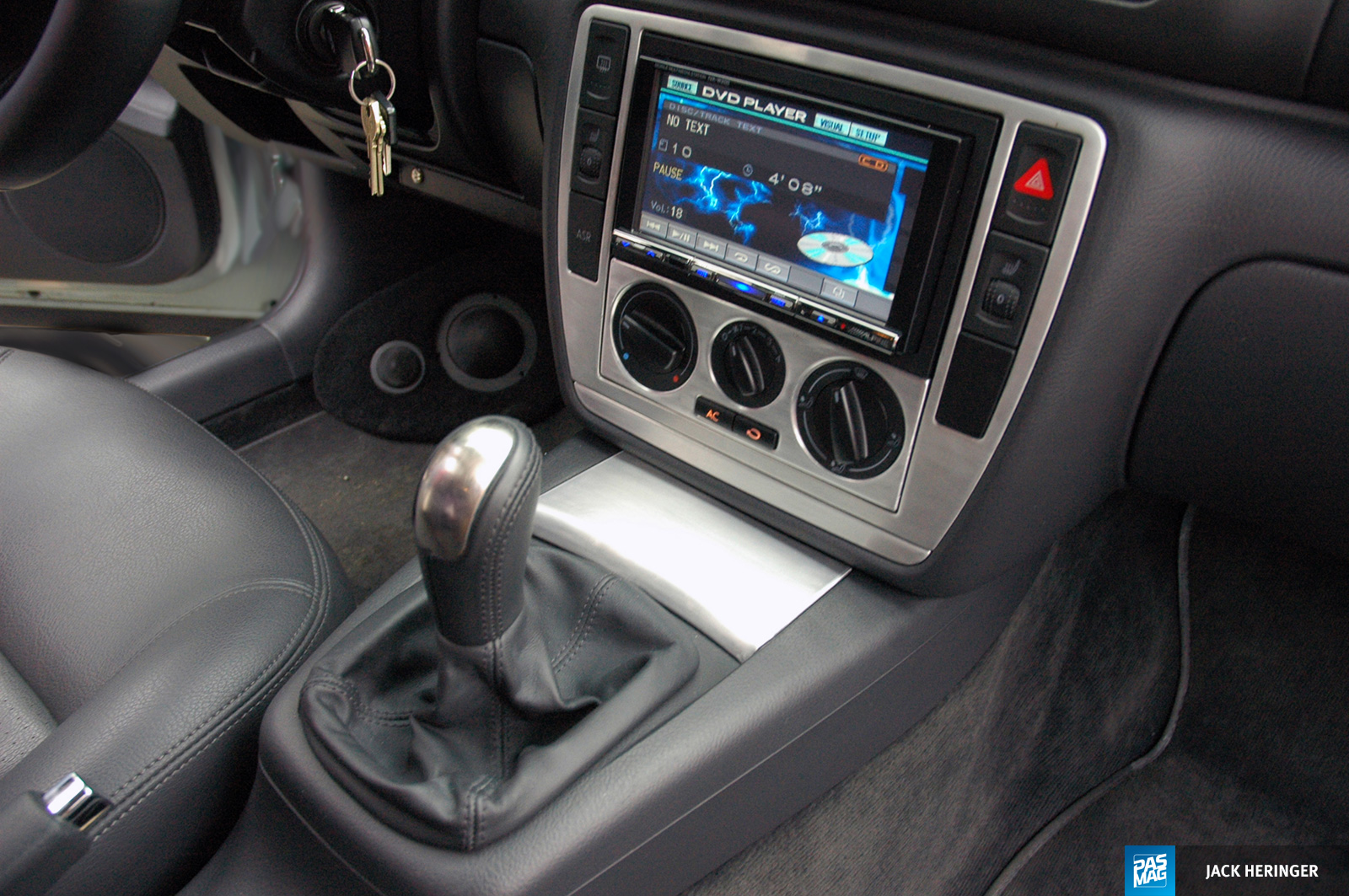 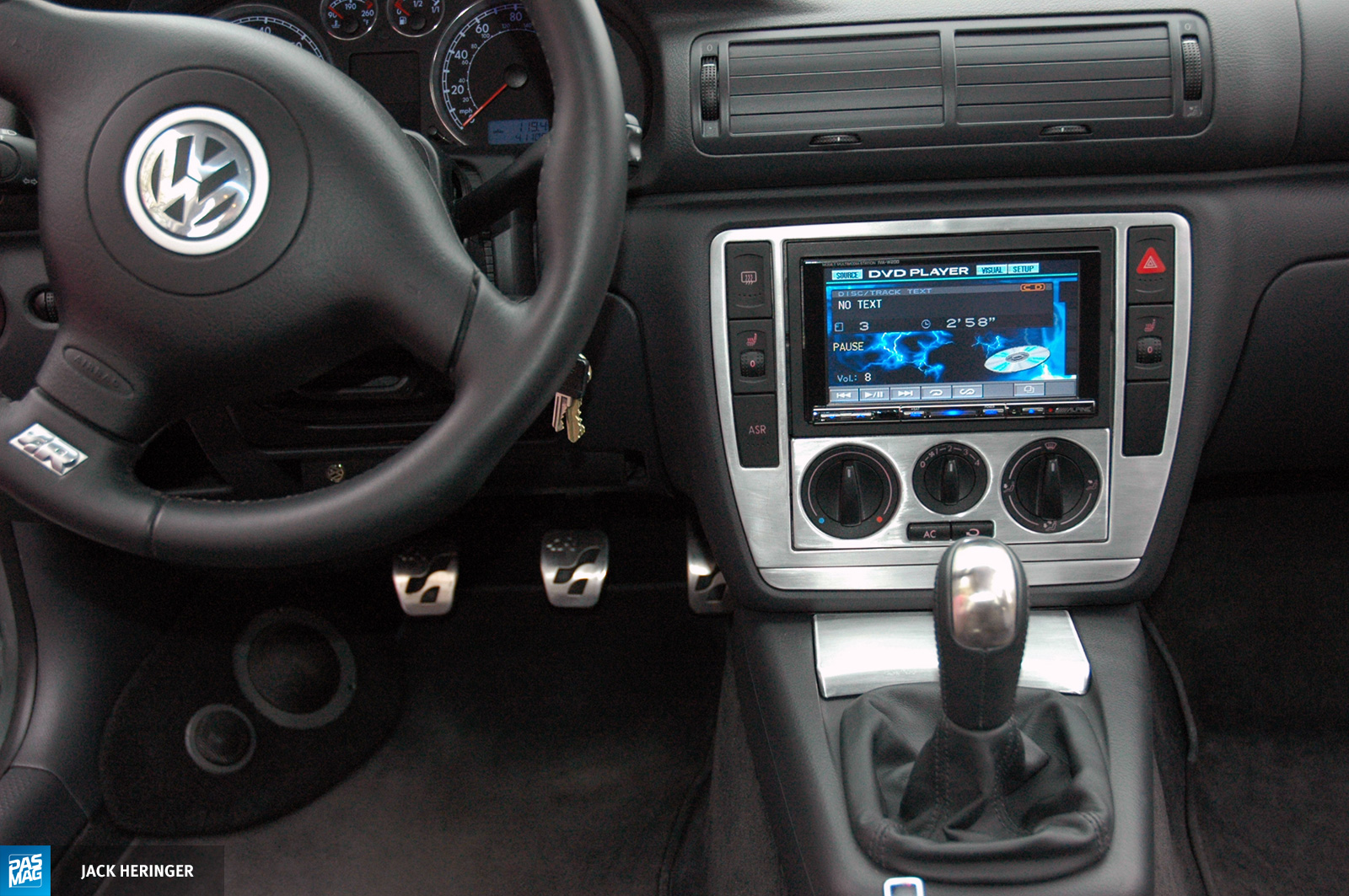 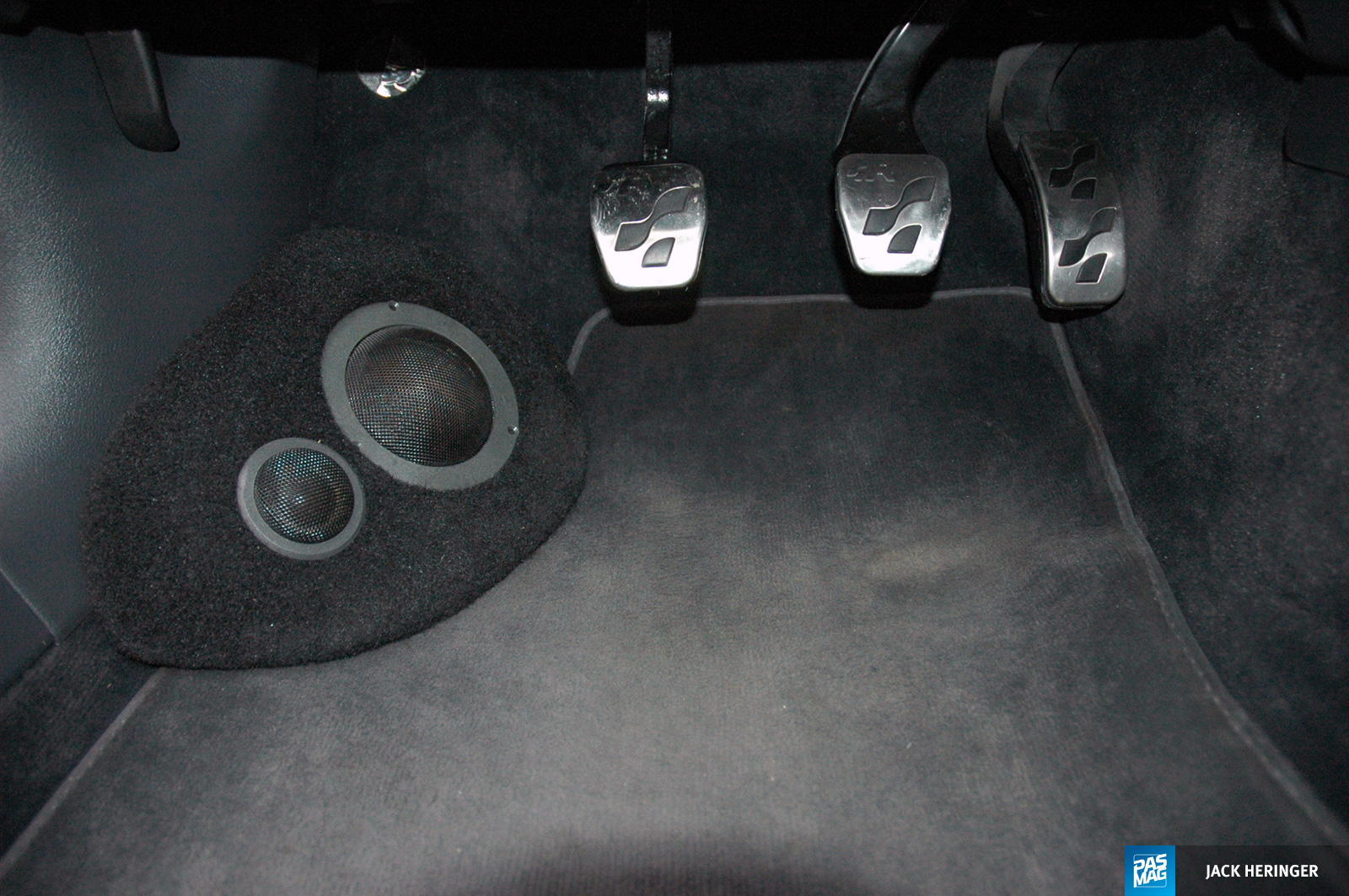 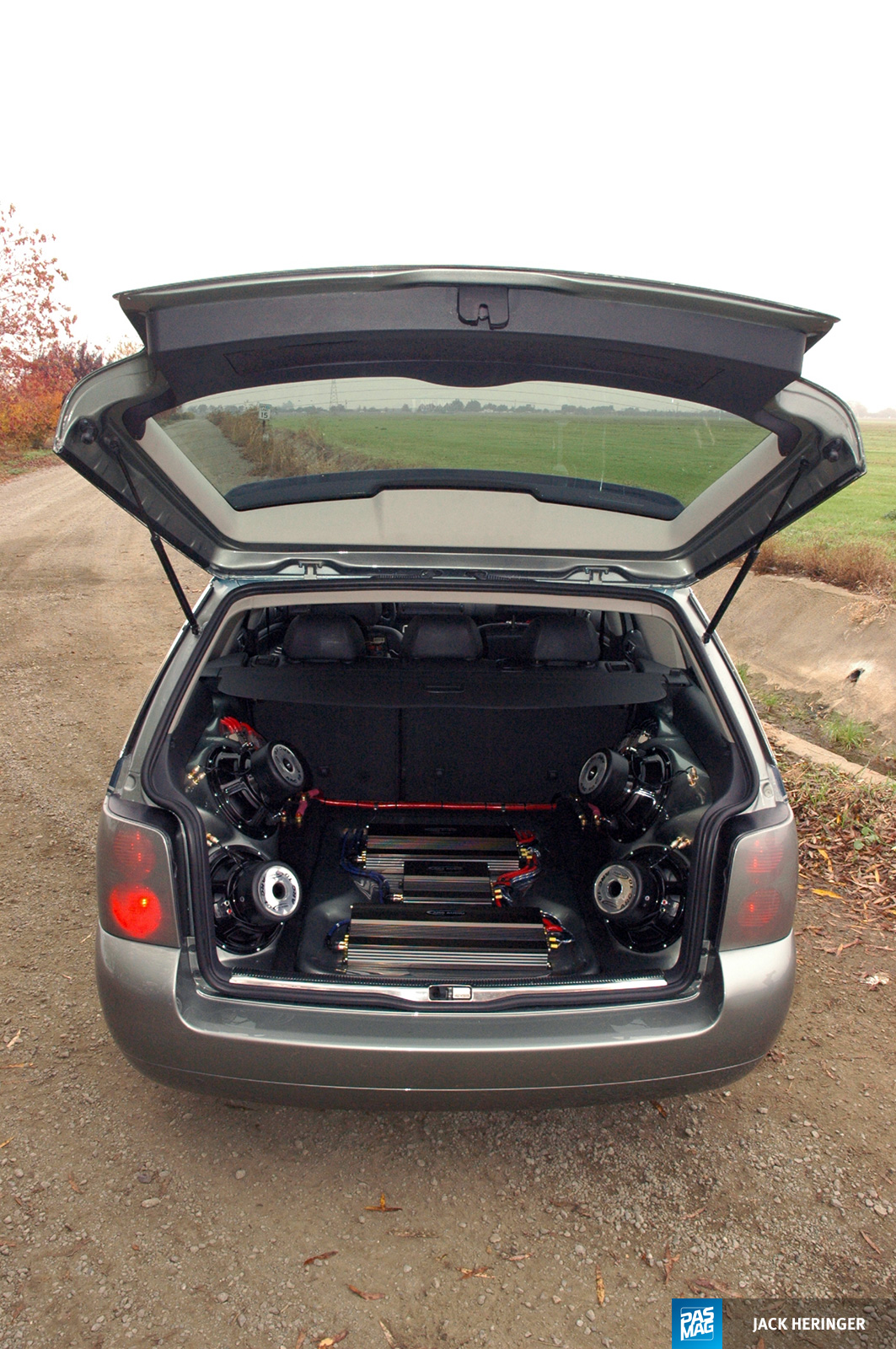 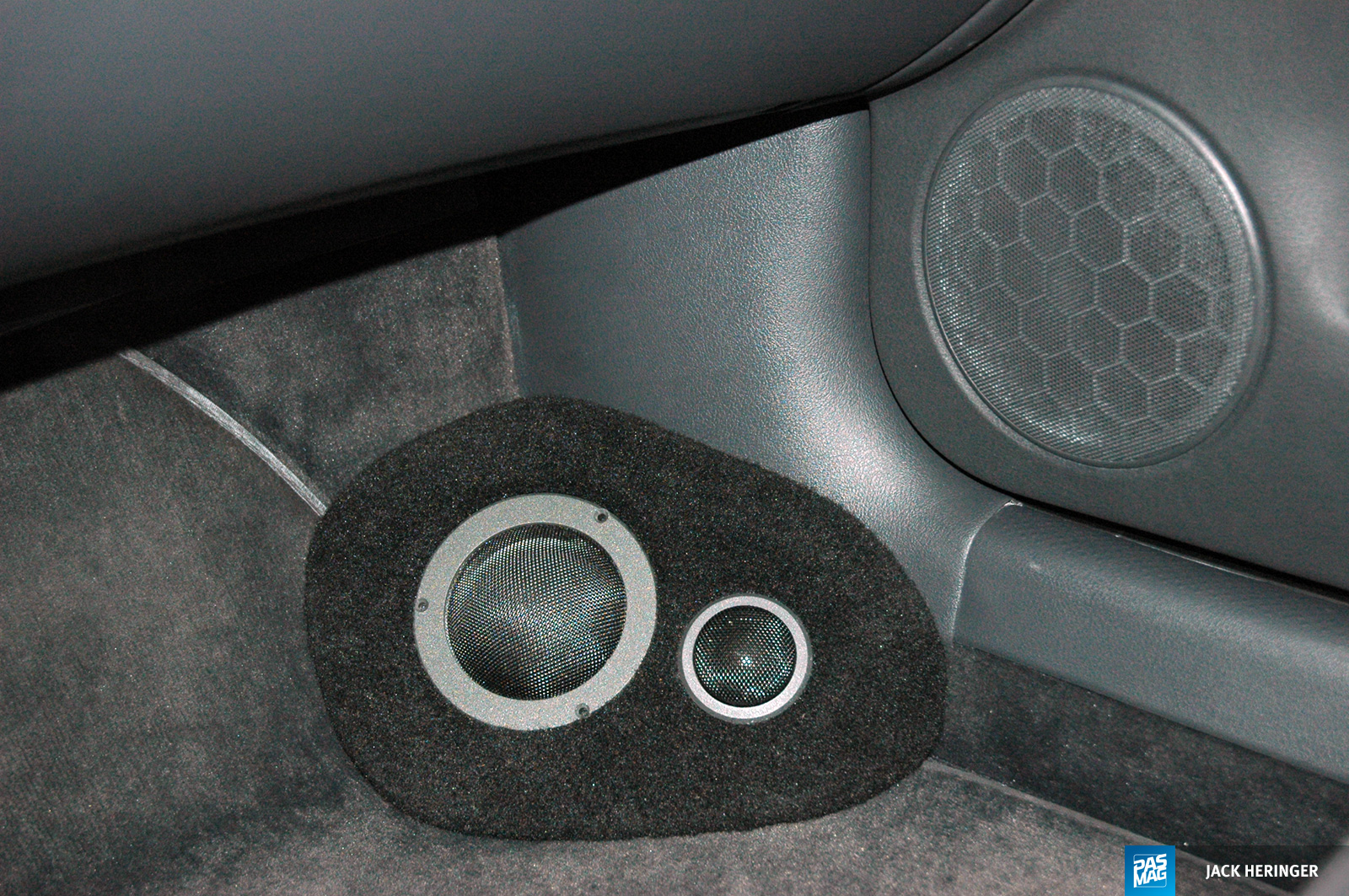 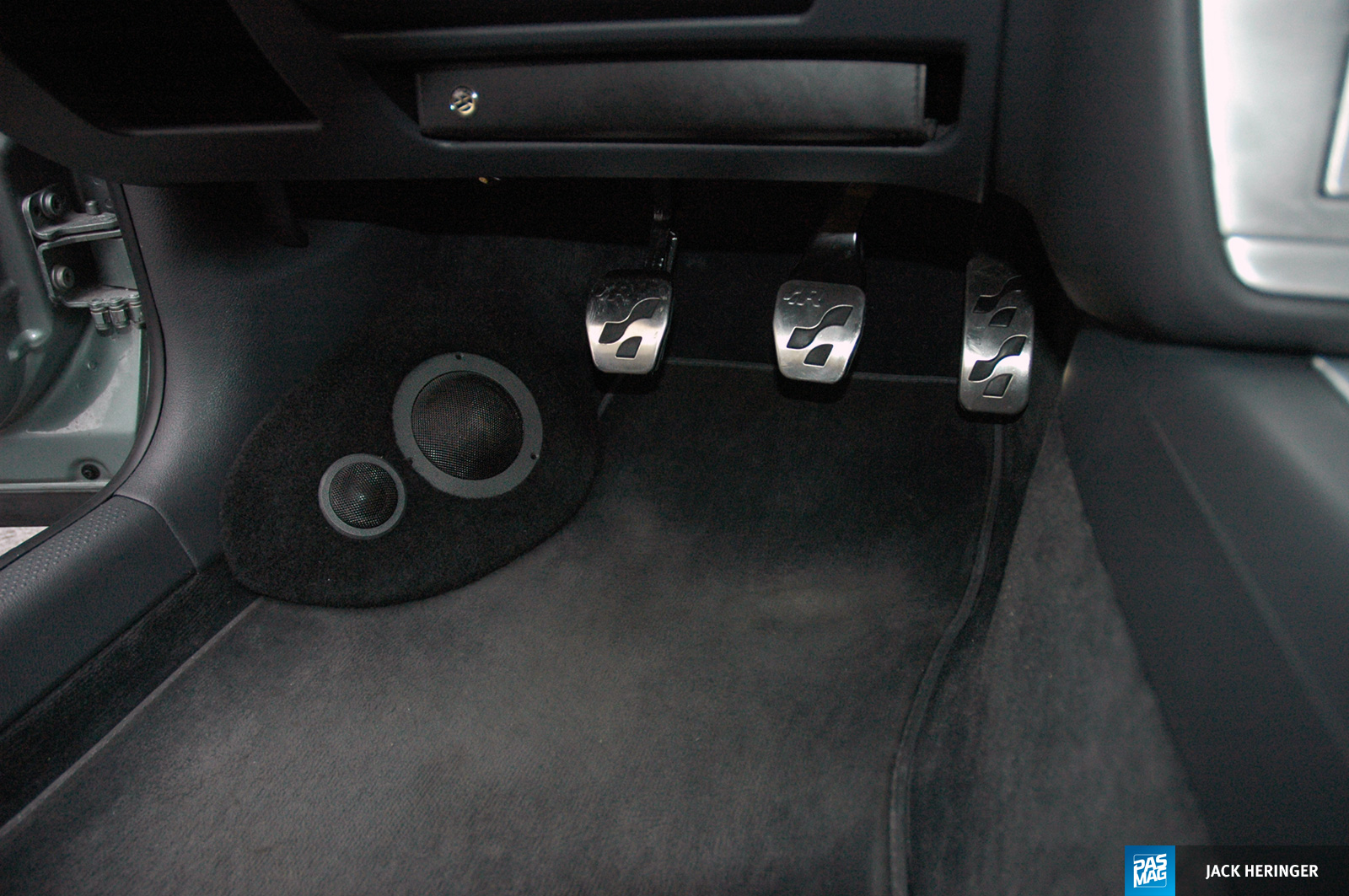 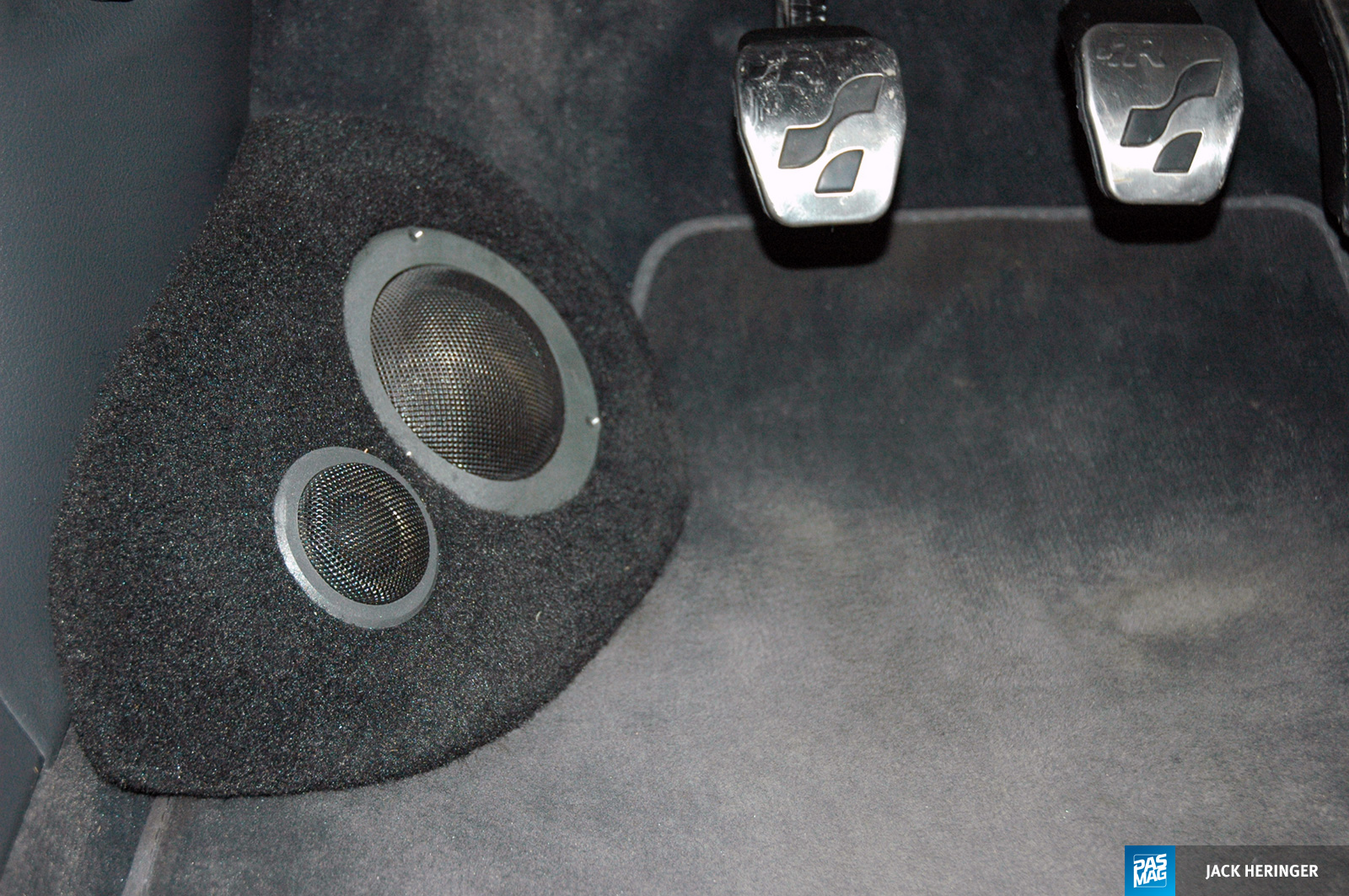 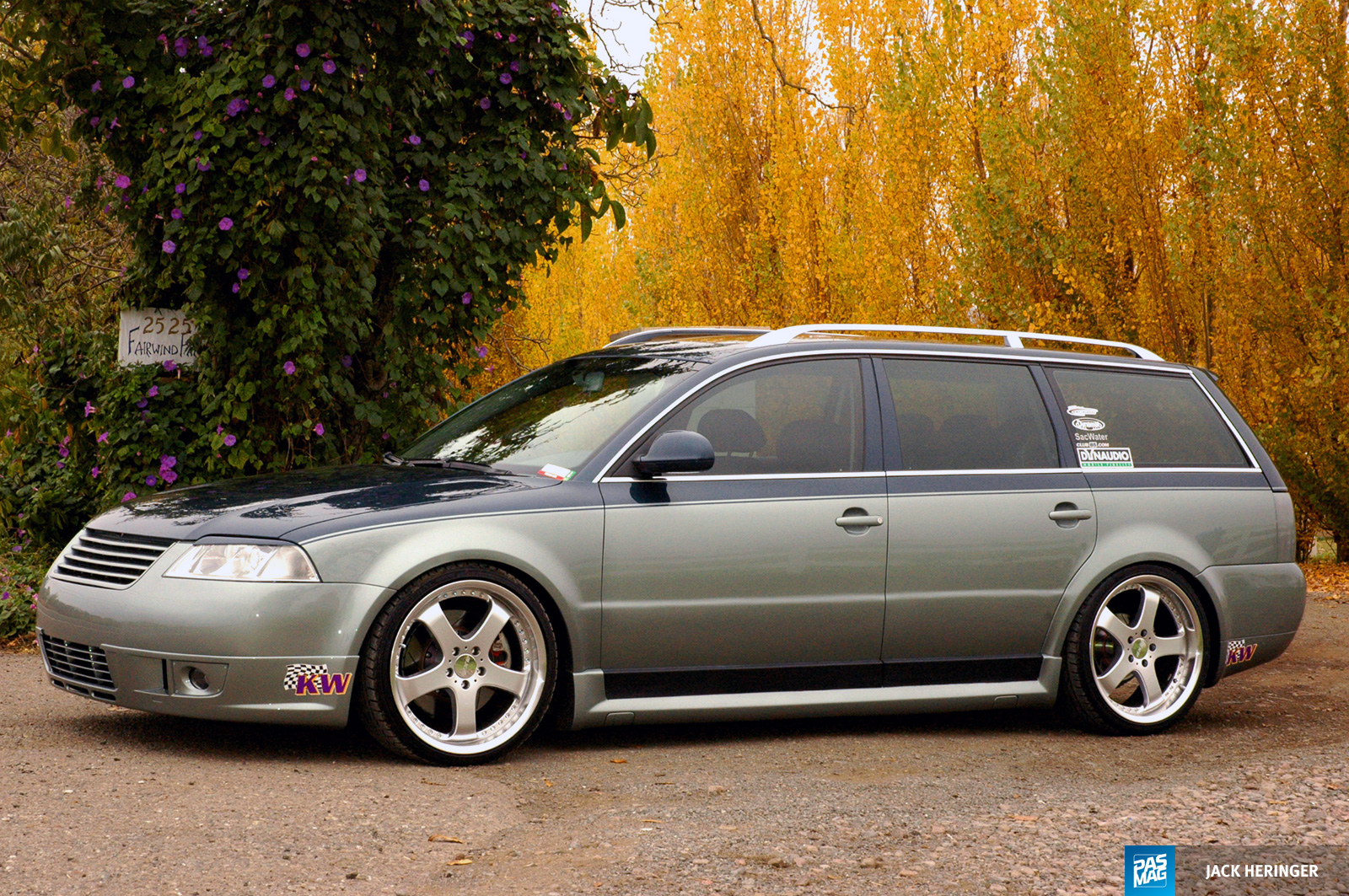 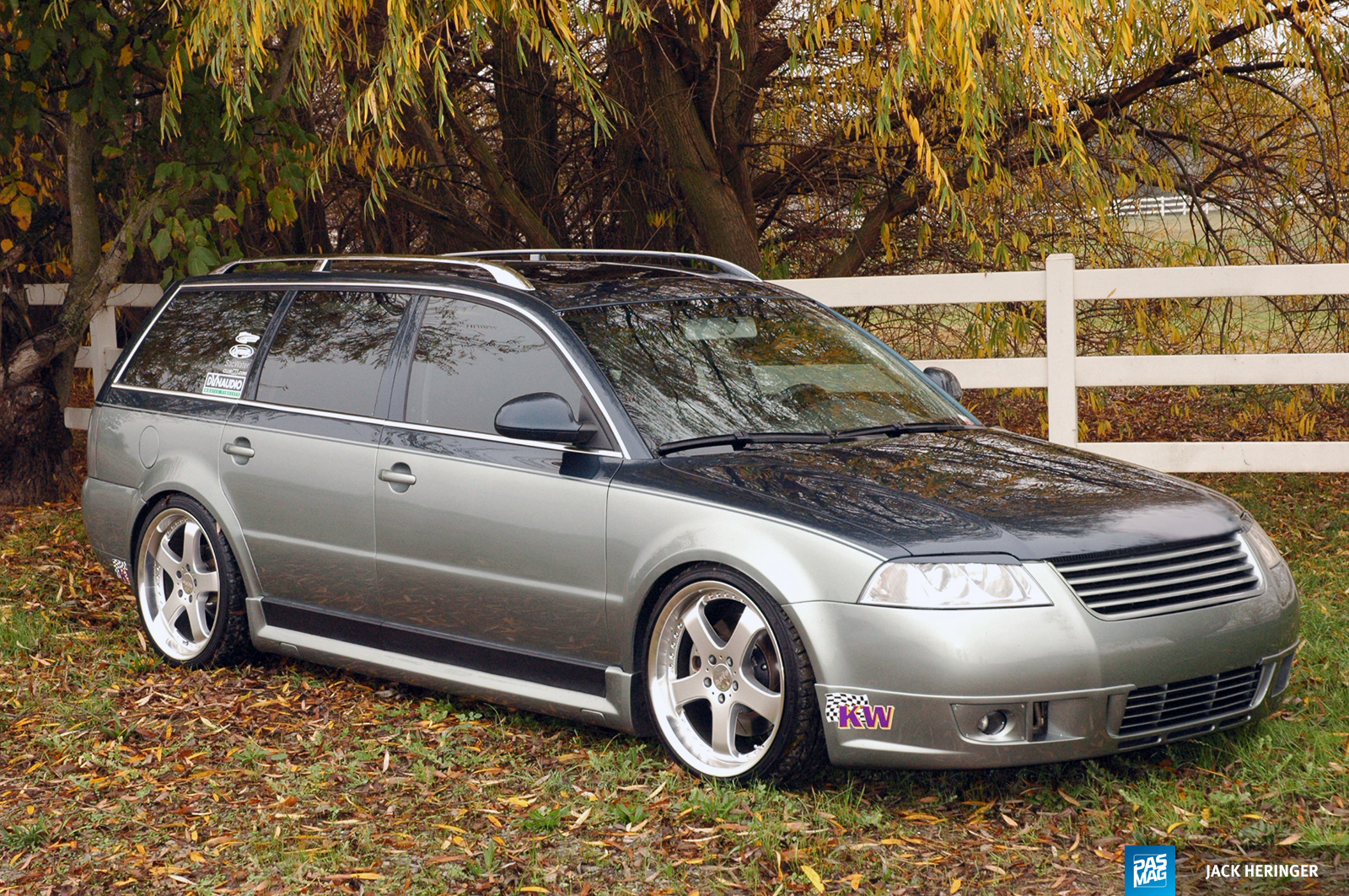