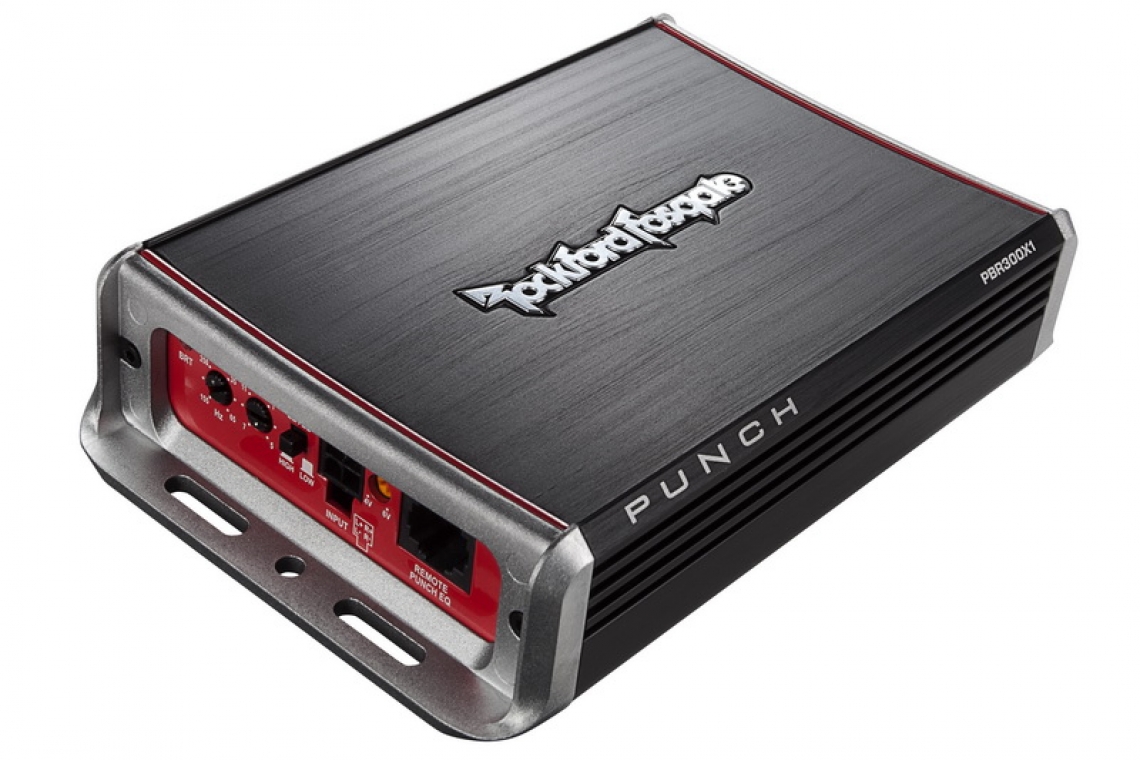 Just when it seemed like everyone had a handle on the various types of amplifiers available for our rides the engineering gurus at Rockford Fosgate have thrown us a curve. For the last 30 years or so, the vast majority of amplifiers used in car audio have been basically one of two or three common topologies. Back in the 90s, almost all amplifiers were typical Class A/B designs, albeit with variations on the theme. Then along came Class D, which began with amplifiers designed for bass only, but as technology marches forward, Class D is now fast becoming the standard topology for any type of car audio amplifier. There were a few Class T, G, H, and GH designs sprinkled in the mix, but Class A/B and Class D have always had the lion’s share of the market.

Well, now Rockford Fosgate has introduced a new, miniature-sized amplifier design that they are calling Class BR. A mono model is available now, and by the time you read this, a 4-channel model will also be available. The concept behind these amplifiers is simple, small chassis, high efficiency, and good sound. For this review, Rockford Fosgate sent me a sample of the $239.99 PBR300X1, which at only 1.5x4.25x6.75-inches is a tiny little amp, but it is rated at 300Watts into 1-Ohm. I had heard some pretty amazing stories about this amplifier from acquaintances at Rockford, so as soon as it arrived I couldn’t wait to put it through the paces. 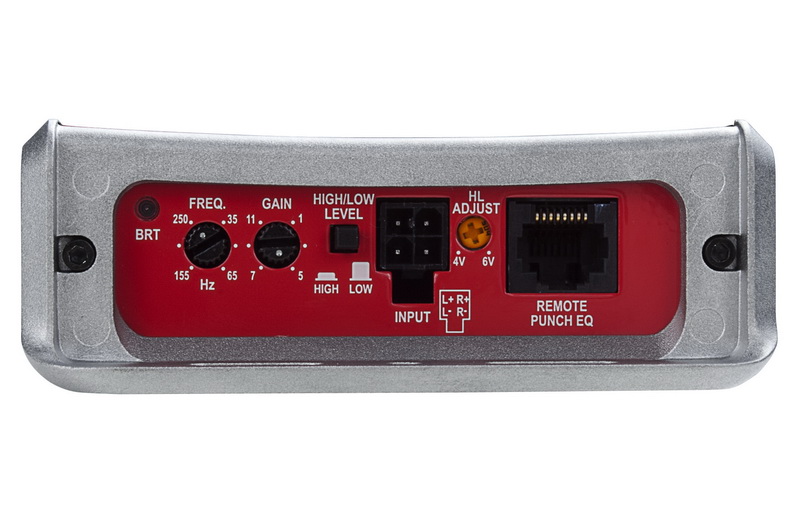 As I mentioned, the PBR300X1 is a very small amplifier, and at first glance it reminds me of an average size passive crossover in terms of how much space it takes up. It is finished in basic black brushed aluminum with red end panels along with a chrome-colored Rockford Fosgate logo on the top. Mounting is accomplished via mounting tabs that are incorporated into the trim panels on each end. Because it is so small, the controls and connections are somewhat different from what one would expect from a Punch amplifier. The power, ground and remote leads are connected via a heavy duty 3-position Molex plug that will accept 10-gauge wire. The wires are secured very well, and the plug has a positive feeling connection when mated with the female connector on the amp. The pair of 12-gauge speaker output wires are also connected via a Molex type, four-position plug. There are a pair of positive output wires, and a matching pair of negative leads. On my sample, the respective wire pairs were spliced together and soldered, but if you wanted to connect them individually to multiple woofers, the harness is long enough to allow you to cut off the spliced segment. Signal input is also handled via a 4-position Molex type plug, which is terminated with RCA-style connections, but if you want to connect speaker level inputs, you simply snip off the RCA’s and wire your high level outputs directly to the remaining wires.

With very limited space for controls and adjustments, the PBR300X1 still manages a gain pot, a variable frequency crossover pot, a high/low level switch, and a pot for adjusting the sensitivity of the automatic DC signal sensing turn-on circuit. The amp also incorporates protection circuitry for under voltage, short circuit, and thermal overload conditions. An RJ-45 style jack allows connection to an optional Punch EQ remote. 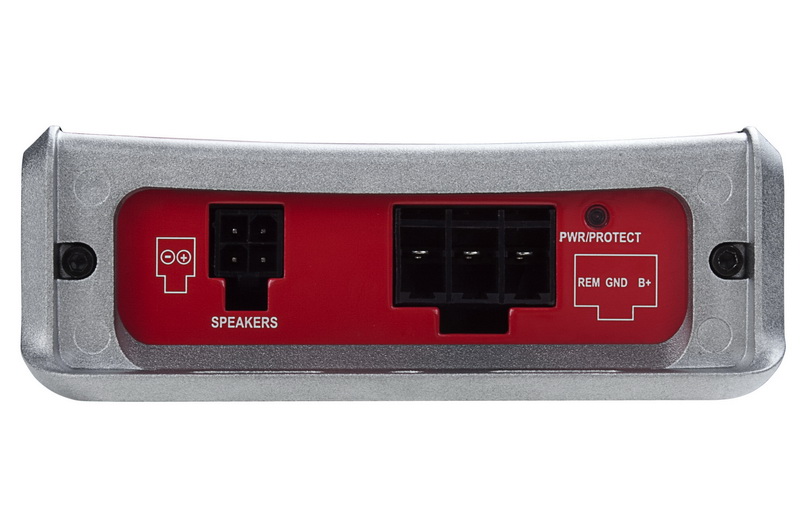 Of course, the first thing I did with the tiny Punch amp was listen to it, and after being thoroughly impressed with what it could do, the next thing I did was take it apart to find out what made it tick, or in this case, boom!

As it turns out, the topology used inside the PBR300X1 isn’t actually a whole new topology as Rockford Fosgate’s “Class BR” marketing materials would lead one to believe. What it really is, is a very clever adaptation of a circuit sometimes referred to as a “charge pump”. While still technically a Class A/B amplifier, the design allows higher than normally possible rail voltages without resorting to a typical switching power supply. This approach provides several benefits. First, the design is inherently efficient and the removal of power supply devices, toroids, and so forth means the amplifier’s size can be dramatically reduced. Second, because the amp is not switching huge currents at high speeds, the amount of radiated noise and radio interference can be virtually eliminated. And finally, through the use of high current capable MOSFET output devices, the design can easily drive 1 ohm loads with no problem. Rockford’s design takes a typical charge pump idea several giant steps forward however, in that the design allows the rail voltage to be dictated by the load and the output level. This further enhances power efficiency, and less power is lost to heat.

The PCB is typical Rockford Fosgate, with a densely populated double-sided, plated through, glass epoxy 4-layer board covered in zero-tolerance surface mount-type devices, and there are three very large 15,000µF capacitors that are used to “charge” the rails to a higher voltage. The devices used to charge the capacitors and for the audio output are TO-220 case MOSFETs. A hand adjusted bias pot ensures proper output transistor biasing, and low distortion. 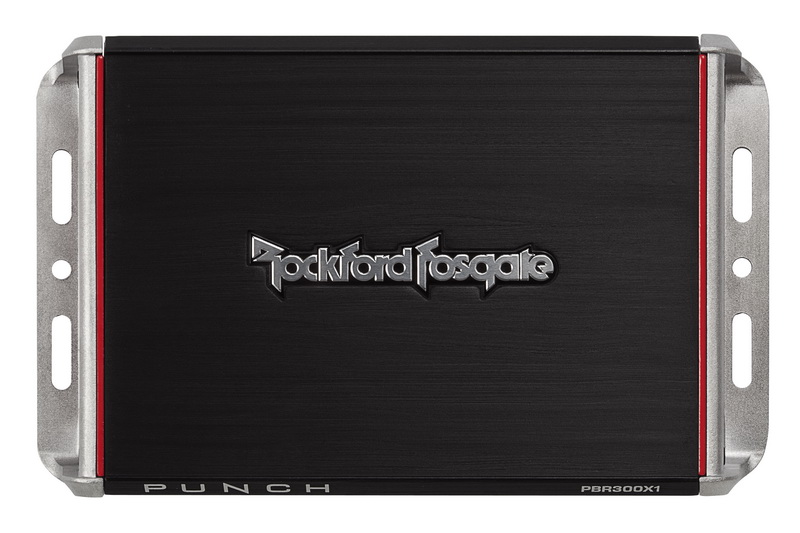 As I mentioned, the first thing I did with this amp was listen to it. Connected into my reference system and driving a 12-inch 2-Ohm woofer, I was very impressed not only with the amount of authority the diminutive amplifier had, but also with the general quality of the sound. Bass notes were well defined, and there was no evidence of any rolloff in the lowest registers. Several tracks with sub 30Hz notes came through loud and clear. This thing is the real deal. Bass definition was quite good, complex pipe organ passages sounded natural and plucked strings on acoustic bass, as well as tympani drums were reproduced with the natural resonance and overtones they produce. Only when I pushed the amplifier really hard did I start to notice a bit less control and loss of definition, but to be fair, that happened at volumes my ears would never sustain anyway.

After re-assembling the amp, I got it on the unforgiving Cogent Audio Labs test bench for a closer look, and the test results confirmed my listening opinions. The amplifier met all of the advertised power numbers, and proved to have a ruler-flat frequency response from below 10Hz to over 200Hz. Signal to Noise measured well, although my numbers were a dB or two off from the published spec. The amp has low output impedance, which helps to control the back EMF of a woofer load and keeps the bass sounding tight. Thermal performance was good, in any normal  installation with adequate ventilation the amp should seldom - if ever - overheat. I listened for any turn-on or off pops and there were none. I even dead-shorted the amp at full power, and it simply protected, and then began working again when the fault was corrected. 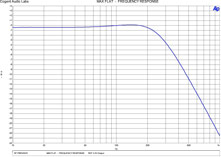 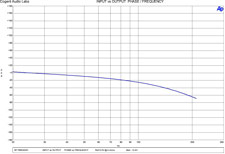 In a world full of marketing hype and overstated performance claims, the Rockford Fosgate PBR300X1 stands out and delivers. The amp combines clever technical innovations with real high-performance audio in a package smaller than you’d expect. Whether you need an amplifier for a motorcycle, all-terrain vehicle, boat, or a full blown Cadillac, the PBR300X1 is up to the task. And if you’re skeptical, just ask Rockford’s Quality Control Manager Mark Lieber, who uses one of these amps to drive six 15-inch woofers!

ust when it seemed like everyone had a handle on the various types of amplifiers available for our rides the engineering gurus at Rockford Fosgate have thrown us a curve. For the last 30 years or so, the vast majority of amplifiers used in car audio have been basically one of two or three common topologies. Back in the 90s, almost all amplifiers were typical Class A/B designs, albeit with variations on the theme. Then along came Class D, which began with amplifiers designed for bass only, but as technology marches forward, Class D is now fast becoming the standard topology for any type of car audio amplifier. There were a few Class T, G, H, and GH designs sprinkled in the mix, but Class A/B and Class D have always had the lion’s share of the market.