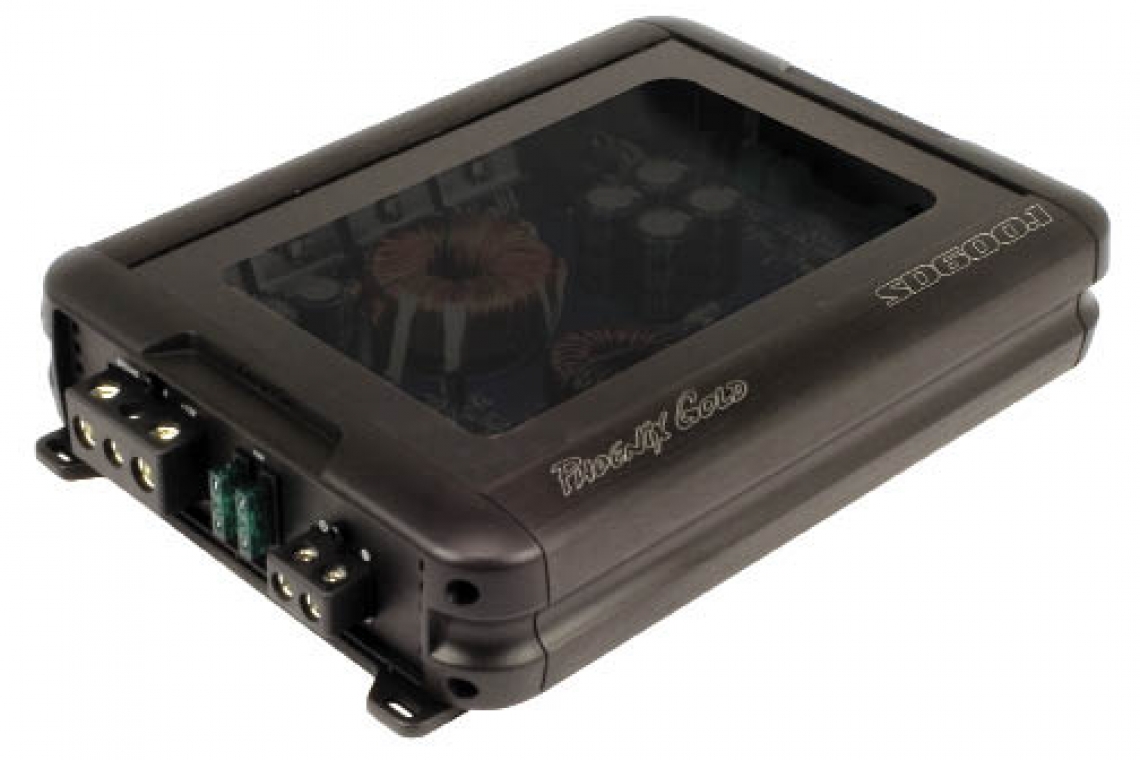 From the team at Phoenix Gold comes the all new SD Series of amplifiers. Following the current trend and high demand for compact high power amplification, these amplifiers come with a small footprint, but pack a lot of power for their size. The SD600.1 we received recently uses a very efficient Class D design, which is a good thing for not only reducing amplifier temperatures, but also resulting in less strain on your vehicle’s electrical system. The SD amplifiers are designed to blend the best attributes of size and power.

The SD600.1 is a Class D mono amplifier, rated at 400 Watts into 2 Ohms, and 600 Watts into 1 Ohm. Curiously, no 4 Ohm power rating is given. Based on a modern Class D topology, the SD600.1 has low noise and good sound quality. Because it uses a permanently engaged low pass crossover, the applications for the amplifier are limited to driving subwoofers. The amplifier is quite small, measuring about 10” long x 6.93” wide x 2” high. Housed inside a black brushed aluminum heat sink, the top of the amplifier features a smoked acrylic window showing the internal components. End panels are formed of a high-strength ABS thermoplastic material, and incorporate cleverly done internal steel reinforced mounting feet while still providing electrical isolation for the amplifiers chassis. The layout is fairly typical, with power and speaker connections as well as a pair of 35A ATC fuses on one end, and the input signal and controls on the opposite end. Very solid panel mount style RCA’s provide the input connection, and controls include gain, crossover adjustment from 30-300Hz, subsonic filter adjustment from 10-55Hz, up to 18dB of bass boost, and a connection for the included wired remote level control.

Inside the SD600.1 I found a thoroughly modern Class D design that utilizes 0% tolerance surface mount parts wherever possible. The layout is designed to minimize noise transfer to the sensitive input circuitry, while maintaining wide copper traces to handle the current 1 Ohm loads demand. A “Pi” noise filter is found on the power supply inputs, and a pair of 3300µF 35 volt caps feed the six MOSFET switchers. The output of the toroids energy is stored via four 2200µF 50V caps, which supply energy to four high current MOSFET output devices. In keeping with Phoenix Gold’s tradition of printing little messages on the PCB, the SD600.1 says, “Good things come in small packages”.

In my reference system, driving a pair of 4 Ohm woofers in parallel, the SD600.1 proved that old adage to still be valid. The amplifier sounded very good, and never seemed to run out of headroom, even when pushed hard. Bass was tight and well defined, and all of the adjustments and controls operated exactly as expected. I did not hear any turn on or off noises during my listening, and the amplifier barely got warm, which is a testament to its high efficiency. At one point during my listening a professional musician and recording artist friend of mine visited my lab asked, “What amp is running those subs?” He was in complete disbelief when I pointed to the little SD600.1. He had actually thought I was using one of my studio amplifiers. I think he went out and bought one.

Moving the amp from the listening room to the unforgiving test bench, the amplifier tested better than the published power specifications. I ran the usual battery of tests, (which in case you were wondering, are in-depth enough to create a 16 page test document) and through the entire series of measurements the SD600.1 proved to be a keen performer. Full power efficiency was over 80%, and distortion at 1 Watt was only 0.06%.

The Phoenix Gold SD600.1 amplifier promises big power in a small footprint, and high efficiency operation. I’m happy to report it certainly delivers on all three promises. If you are in the market for an amplifier that fits almost anywhere you’d like to mount it, will drive 1 ohm loads with relative ease, and is as easy on the bank account as it is on the alternator, you should take a close look at the SD600.1.