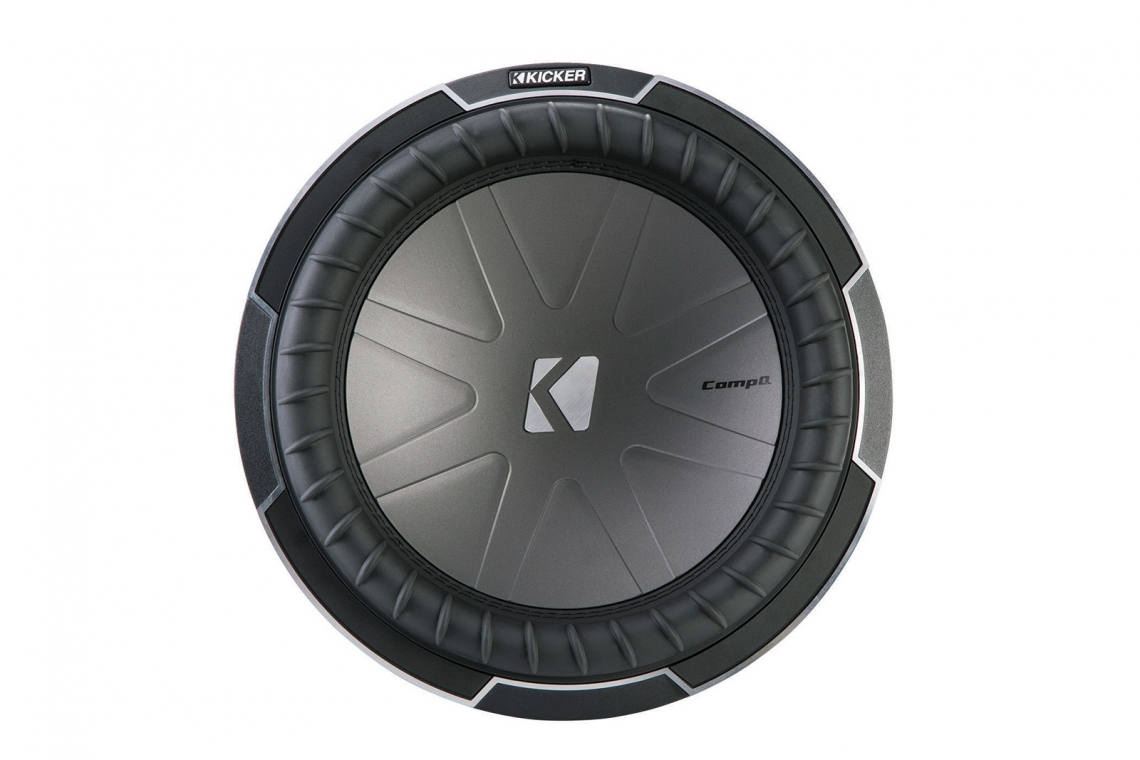 Earlier this year we had a look at the Kicker L7 square subwoofer, which is part of Kicker’s illustrious Q-Class product line.

Adding to that Q-Class product is the CompQ series of woofers, which are a more traditional round shape, but include a lot of the leading edge engineering found in the Q-Class products. The CompQ series of woofers represent the highest performance round woofers the company has ever made, and that says a lot when it’s Kicker doing the talking. Designed specifically to have increased excursion and power handling while retaining enclosure size and type flexibility, the CompQ woofers are also built with sound quality in mind, and are backed with a full three-year warranty when purchased from an authorized dealer. For this review, the good folks from Stillwater, Oklahoma, sent us a CWQ12, so we put it through the paces in the test lab and listening room. Here is what we found.

The Kicker CWQ12 woofer is a dual-voice-coil, 12-inch woofer built around a heavy duty die-cast aluminum alloy basket with several unique features. Just above the large magnetic motor assembly and below the spider are large finned vents to provide cooling airflow for the 2.375-inch voice coils. For a nice cosmetic touch, the top outer lip of the basket features a raised rib that has received a nice polished treatment.

To ensure maximum linear voice coil movement, the voice coil placement in the magnetic gap is determined using FEA computer analysis. The woofer’s magnetic motor surrounds long low-carbon poles designed to augment the long throw design. The resulting pole piece is a solid, non-vented design with high mass to improve thermal power handling. An additional benefit of this design is the ability to mount the woofer in shallower depth enclosures, since there is no pole piece airflow to worry about. 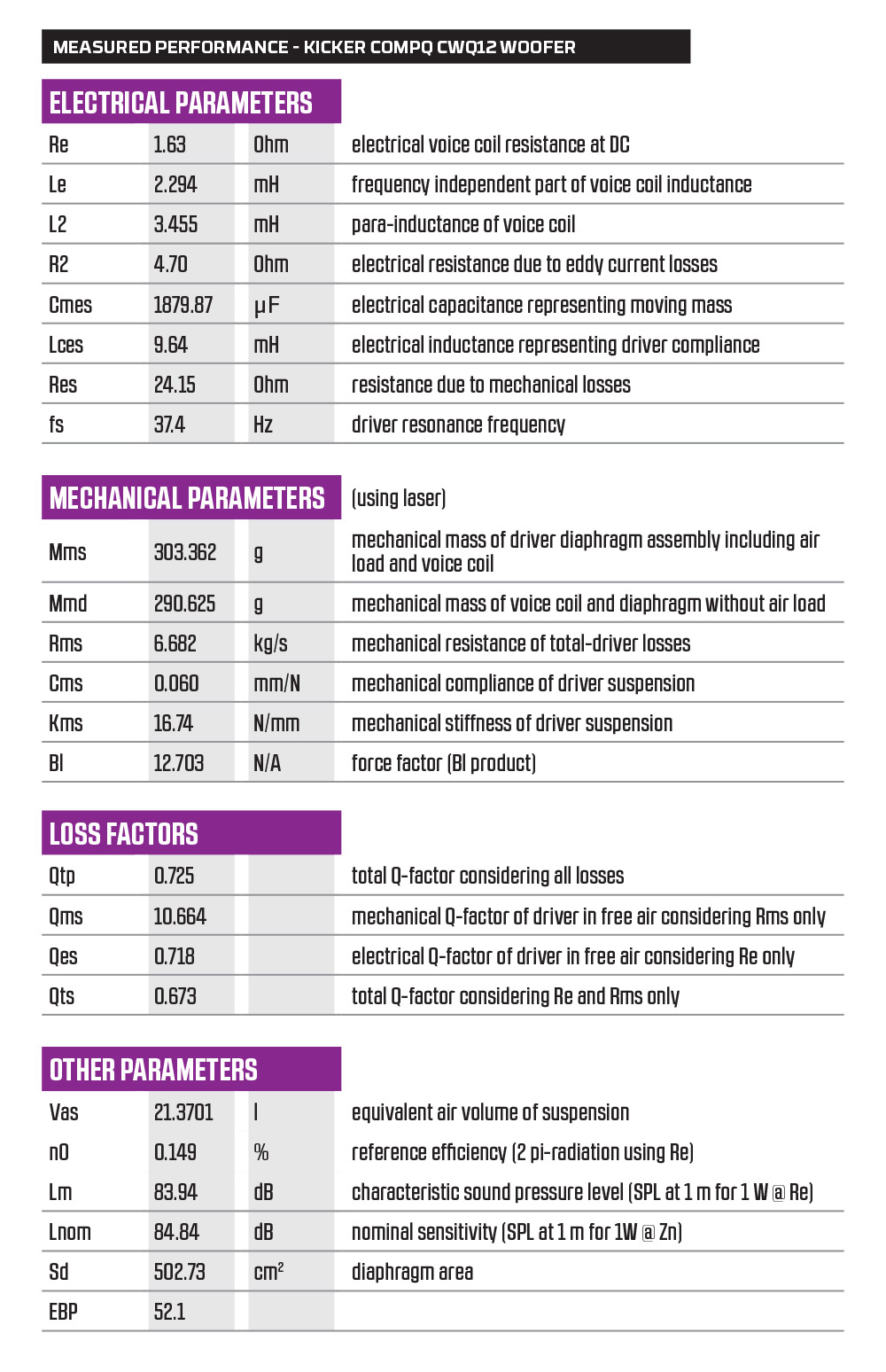 It’s fine to build the coil and magnetics to provide a bunch of excursion, but you must also have a mechanical suspension system that’s up to the task. To that end, Kicker employed large diameter spiders with integrated ribbon-type tinsel leads for maximum current handling and no possibility of torn leads under high excursion conditions. This assembly couples to Kicker’s proprietary injection-molded, concave-ribbed cone with an integrated dustcap. For maximum reliability under the most extreme conditions, the CWQ12 has the Santoprene ribbed surround glued and double stitched to the cone.

On the underside of the cone, the woofer uses a 360-degree cone brace to provide maximum rigidity and decreased distortion. Additionally, all of the surfaces that are bonded together with adhesives are pre-treated with a laser etching process to ensure a full strength positive bond.

The speaker terminals are also thoughtfully done, with all four terminals placed together on one side of the basket for ease in connections. The terminals are spring loaded and will accept up to eight-gauge cable.

According to the supplied owner’s manual, the woofer can be used in sealed- or vented-style enclosures. I decide to test the excursion and power handling, as well as the sound quality of the woofer in one fell swoop, so I opt for a large sealed enclosure, measuring 1.75 cubic feet in volume. In fairness, I should mention that the woofer will work in sealed enclosures as small as 0.88 cubic feet.

With the woofer mounted in my test enclosure and after a bit of experimenting with crossover points and getting the woofer’s output level adjusted to match the rest of my system, I’m ready to hear the best round woofer Kicker has ever built. Not surprisingly, I’m not disappointed! One of my favorite tracks for checking very low frequency output is Avril Lavigne’s’ Sk8er Boi. There is some low frequency synthesizer in the beginning of this track that can really surprise you if you’ve not heard it before. Many systems simply don’t have enough output to reproduce this track properly, but the round Kicker Q-Class woofer nails it. The synthesized bass is so strong, I play that part of the track several times just for the fun of it.

Then it’s time to get serious about evaluating the sound quality of the woofer, so I switch to more revealing jazz and classical musical selections from some of the best audiophile labels. I’m seriously impressed with the woofer’s timbre and definition. Chord changes and other low frequency nuances are distinct and pure. On these exceptional recordings from DMP, Telarc, Sheffield Lab and others, the Q-Class woofer sounds simply excellent. A professional bass player friend of mine had joined me for the evaluation, and he commented that on some of the songs that he was very familiar with, he’d heard things in the bass he’d never heard before. Pretty high praise!

With the woofer normalizing overnight, I move it into the lab for some basic measurements. The results are not surprising at all, as the technical data backed up everything we’d heard the day before. Some of the Thiele-Small parameters are a bit off of the published specifications, but that’s not surprising considering the tolerances that are normal on loudspeakers, and the fact that the woofer I measured had about five hours of enthusiastic use on it. 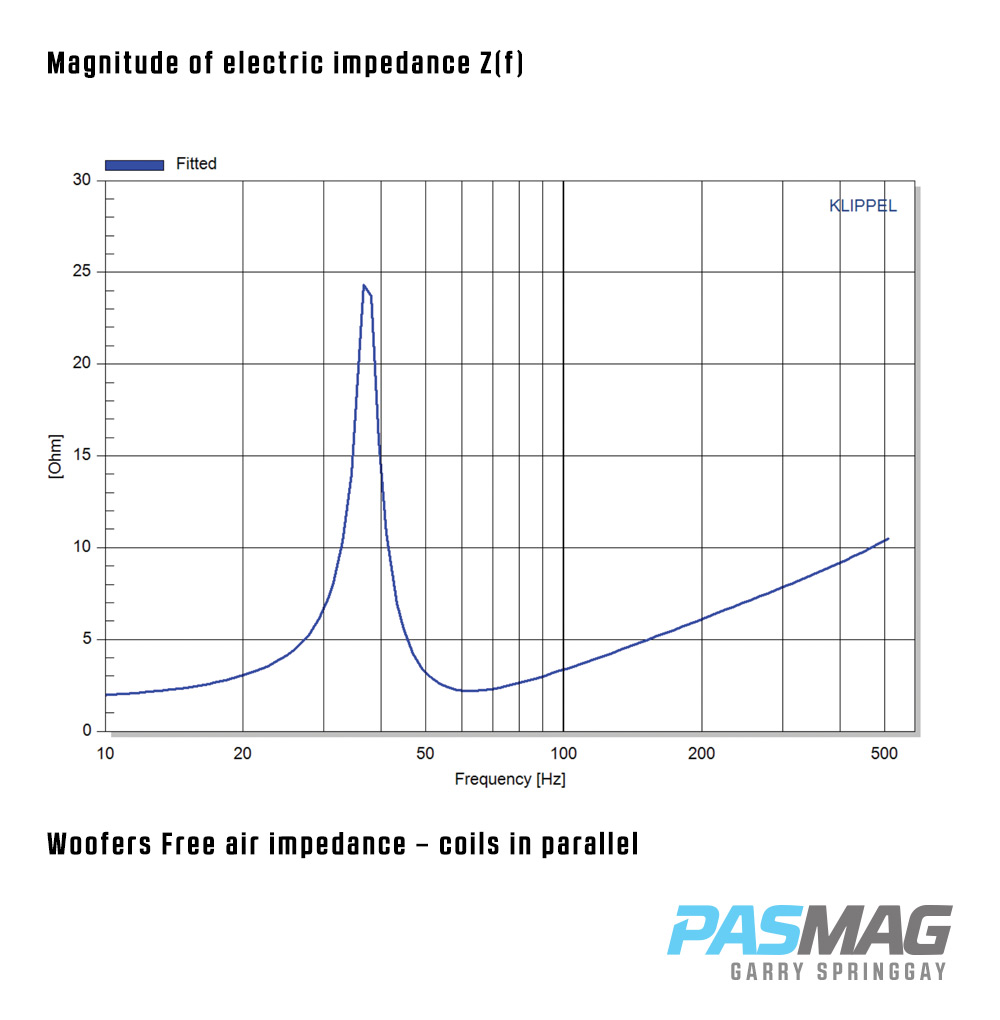 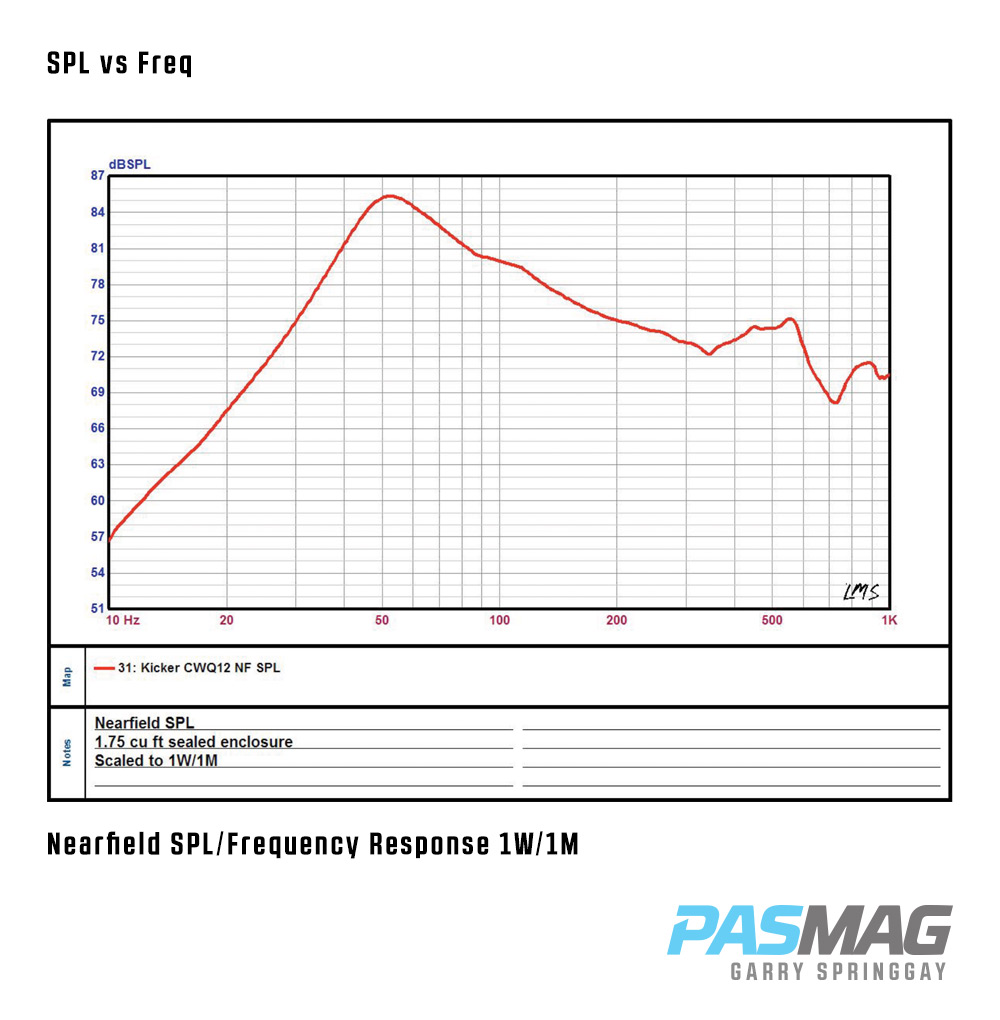 After my evaluation of the Kicker CompQ CWQ12 woofer, I can’t argue with the original statement that this is quite possibly the best performing round woofer that Kicker has ever produced. When you are talking about a company with a long history of performance and product excellence that the Kicker brand has earned, that single statement pretty much says it all. The Kicker CCWQ12 is available at a Kicker dealer near you with a suggested retail price in the U.S. of $499.95. 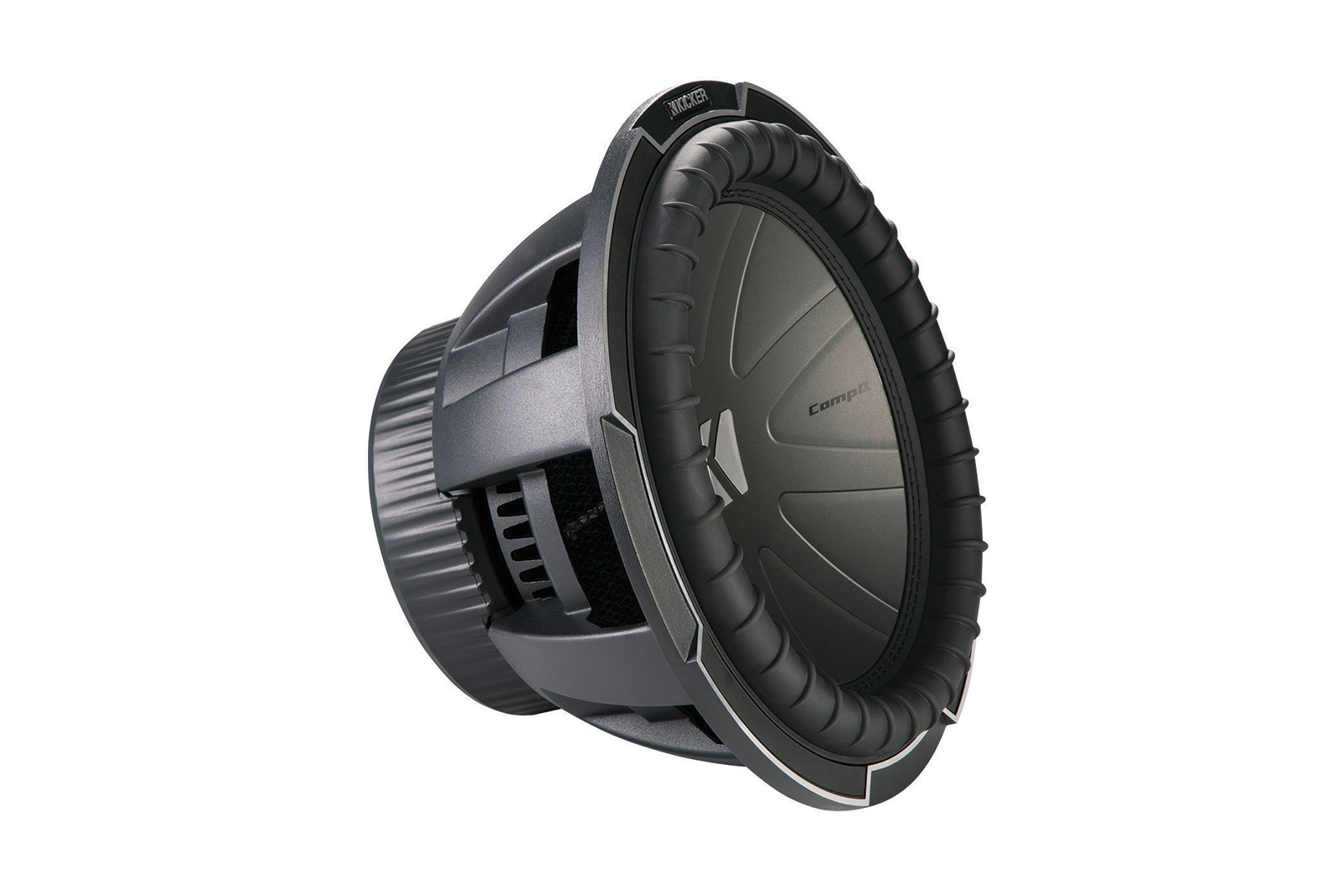 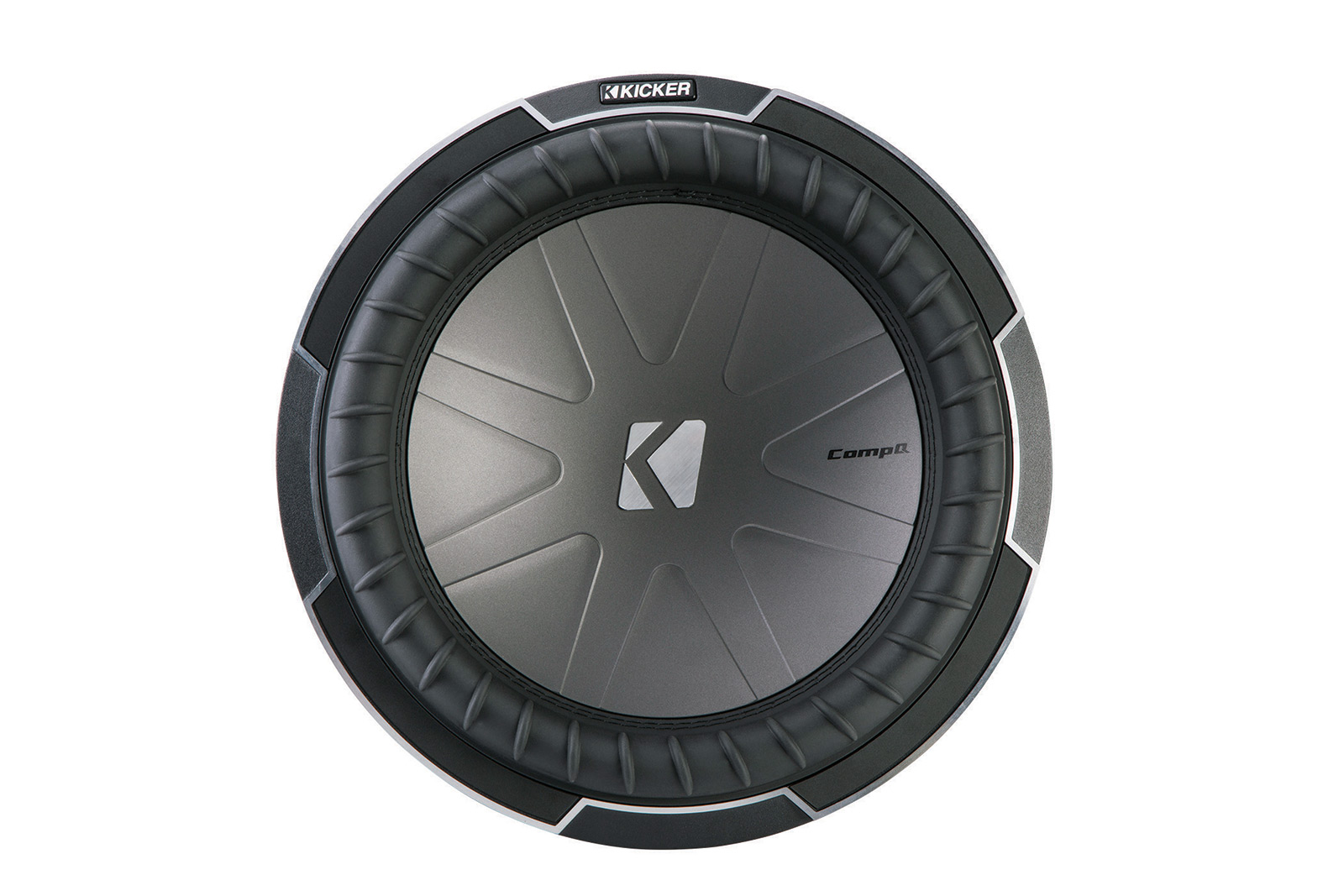