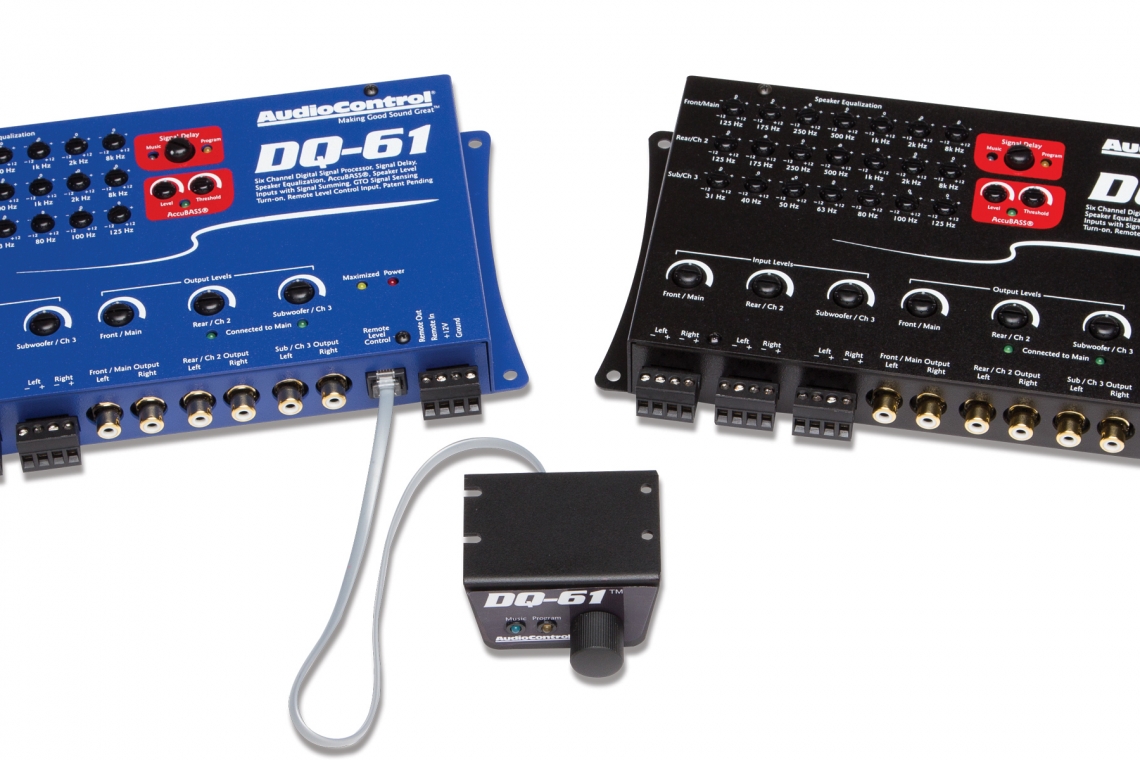 No one really likes the sound of an OEM system. We tolerate it but yearn for serious audio gear and tunability so we can make EQ adjustments, restore the missing bass from the radio, and improve the soundstage. Until now, that has meant many different bits of kit – and making those bits work properly together is another story. As a result, many folks give up because the whole process is simply too complicated or expensive. If you have been struggling how to interface and provide extensive tunability from your OEM system to your aftermarket amplifiers and loudspeakers, the folks at AudioControl have just made the decision a no-brainer.

With the introduction of their newest product, the DQ-61, they have basically made all other choices irrelevant in one fell swoop.

The new AudioControl DQ-61 is designed to be the answer to your OEM interface and tuning woes. With six channels of input and output, three separate 7-band equalizers (front, rear, and sub channels), the patent pending AccuBASS circuitry to restore the bass removed by the OEM system at high volume, and signal delay adjustments for the left front channel and the sub channels, the DQ-61 makes interfacing with the OEM radio simple, and tuning and system setup is a breeze. And maybe best of all, there are no computers or external devices required (although by the time you read this, a free optional app for Apple devices should be available).

To try and list every single feature of the DQ-61 would take more space than I have available, but here's a list of what I consider the highlights:

• Separate input and output level controls allow users to set up the DQ-61 for the optimum levels for the output of the OEM source as well as the aftermarket amplifiers.

• Input circuitry capable of handling virtually any OEM amplifier (including Bose) up to 400 watts.

• Over 8 volts of usable output to keep the signal strong and well above any errant noise.

• Patent pending AccuBass® circuitry restores the bass that is removed by the OEM system as the volume is increased. Now you can play the system at proper levels without losing the backbone of your music!

• Separate signal delays for the front left channel (and the front channels together) allow you to achieve the correct stereo image and bring the bass up front as well.

• An iPhone/iPad app is in the works to make setup even simpler.

• ACR3 system remote control knob provides a way to adjust the delays from the driver seat. When set to Music mode it provides a convenient sub level control.

• A full five-year warranty means the folks at AudioControl know this is a rugged piece and aren’t afraid to stand behind it.

You begin the setup by selecting which inputs you’ll use. All six outputs can be driven from the main (front) inputs, or the DQ-61 can be configured to work with four or six channels of discrete inputs. If you have two inputs with different frequency ranges, you can use the summing feature to combine the signals for “full range” on the front and rear outputs. Using the separate input and output level controls, it’s a snap to get the unit adjusted specifically for your particular OEM source and aftermarket amplification.

To setup the delay, you can use either the included ACR-3 control, or download the free iPhone app. The process is simple; you begin by setting the delay for the left front speaker while listening to a track with a good center image. Most tracks with a dominant vocal will work, or you may have your own special track. I use my Autosound 2000 test discs for this sort ??of tuning. Adjusting the delay is as simple as selecting the correct mode and then turning the remote knob. Each detent in the knob is accompanied by a low level “tick” so you know you’ve added a bit more delay to the channel. Once you are happy with the left-to-right stereo image, switch from adjusting the left front speaker to adjusting them both, allowing the subwoofer to move up front into the soundstage. With up to 10 milliseconds of delay for the left channel and a maximum of 35 milliseconds for the front channels together, you have a powerful image enhancement and stabilization tool at your fingertips, all without needing complicated test equipment or computers.

The AccuBASS feature is just as easy to set up, and unlike simply adding EQ, this feature is designed sort of like a loudness contour in reverse. Most OEM car stereo systems are designed with low cost and reliability as their most important design goals. While this is an understandable approach for the car manufacturer, it’s less than ideal for us audio enthusiasts. To prevent speaker damage, the OEM systems will begin to remove bass output as you increase the volume. The result is a system that has no bass when you approach enthusiast levels. The AudioControl AccuBASS function is designed to bring this bass back when the OEM system removes it. When adjusted correctly, it gives a virtually flat response at any volume level. The result is a system that has good linearity from low to high volume without having to make adjustments manually as you change your preferred level.

Over and above the AccuBASS restoration, there are the front, rear and subwoofer 7-band EQs which provide all the adjustment necessary to dial in the sound of the entire system just how you want it.

On the test bench, the AudioControl DQ-61 proves to be a very accurate, high performance processor. Interchannel gain tracking is within a half a decibel, signal-to-noise is excellent, and frequency response is beyond the limits of human hearing on both ends. The unit has a maximum useable output voltage of 8.3 Vrms and a low output impedance of 137 ohms. My only quibble is the 20k ohm input impedance, which may cause some OEM radios to sense an open circuit and shut off the channel. This is easily overcome with a 150 ohm resistor, but it would be nice for the unit to look after this detail instead.

The AudioControl DQ-61 is a lot of technology in a small box, and could prove to be the “go-to” OEM interface of 2014. With its excellent tuning and system compatibility, and ease of setup and operation, it’s sure to draw the attention of many installers and anyone looking for a high performance, well-engineered OEM interface solution. It is competitively priced, has a fantastic warranty and the expertise of a group of folks who simply “get it” when it comes to car audio.

If you are considering any sort of OEM interface for your car, you owe it to yourself to get to your local AudioControl dealer and check this piece out for yourself. You can thank me later.