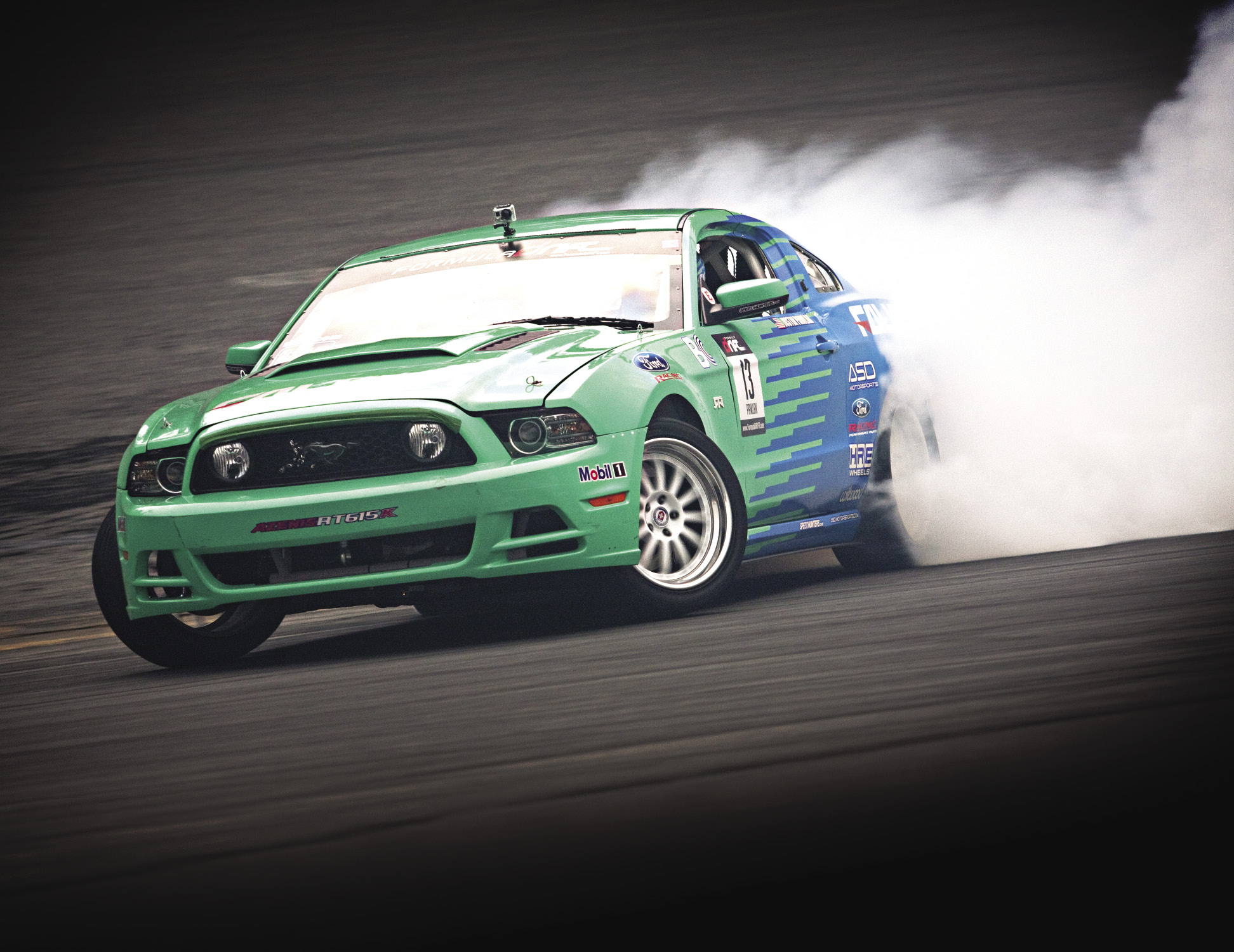 Justin Pawlak has been a force in the 2012 Formula D season and his custom wild, bucking Mustang is a major reason why.

Team Falken Tire has been racking up quite the trophy case in the Formula Drift series. Between its all-star lineup of drivers it has achieved more overall wins than any other team in the past two years, largely as a result of signing Justin “JTP” Pawlak. This season (2012) marks his third year with the team and things have really kicked into high gear. Pawlak dominated the first two events of the FD season and managed to take the runner-up spot in round three, showing his run at the championship in 2011 was no fluke.

His success can be linked to his undeniable skill behind the wheel and the muscle car you see here: the 2013 Falken Tire Ford Mustang RTR. Talent cannot be explained in a few pages of a glossy print magazine, but we'll try to break down a few of the secrets behind his ride.

On the surface, its teal and blue paint scheme is both familiar and exciting, bringing back memories of teammate Vaughn Gittin Jr.'s many victories. Look closer and you can spot the LED exterior lamps are all-new for this season and nearly all of the car's body panels are actually made from dry carbon fiber to keep the weight down. Autosport Dynamics (ASD), the fabrication house behind the build, created all of the panels from scratch and the result of this intense diet plan has helped realize a savings of nearly 600 pounds versus stock chassis to put Pawlak's car squarely into Formula D's 3,000 to 3,099 pound weight class. The aerodynamics have also been tweaked with a few RTR parts, namely a front chin spoiler, side skirts and a trunk lid spoiler to put a bit more downforce on the rear rubber. 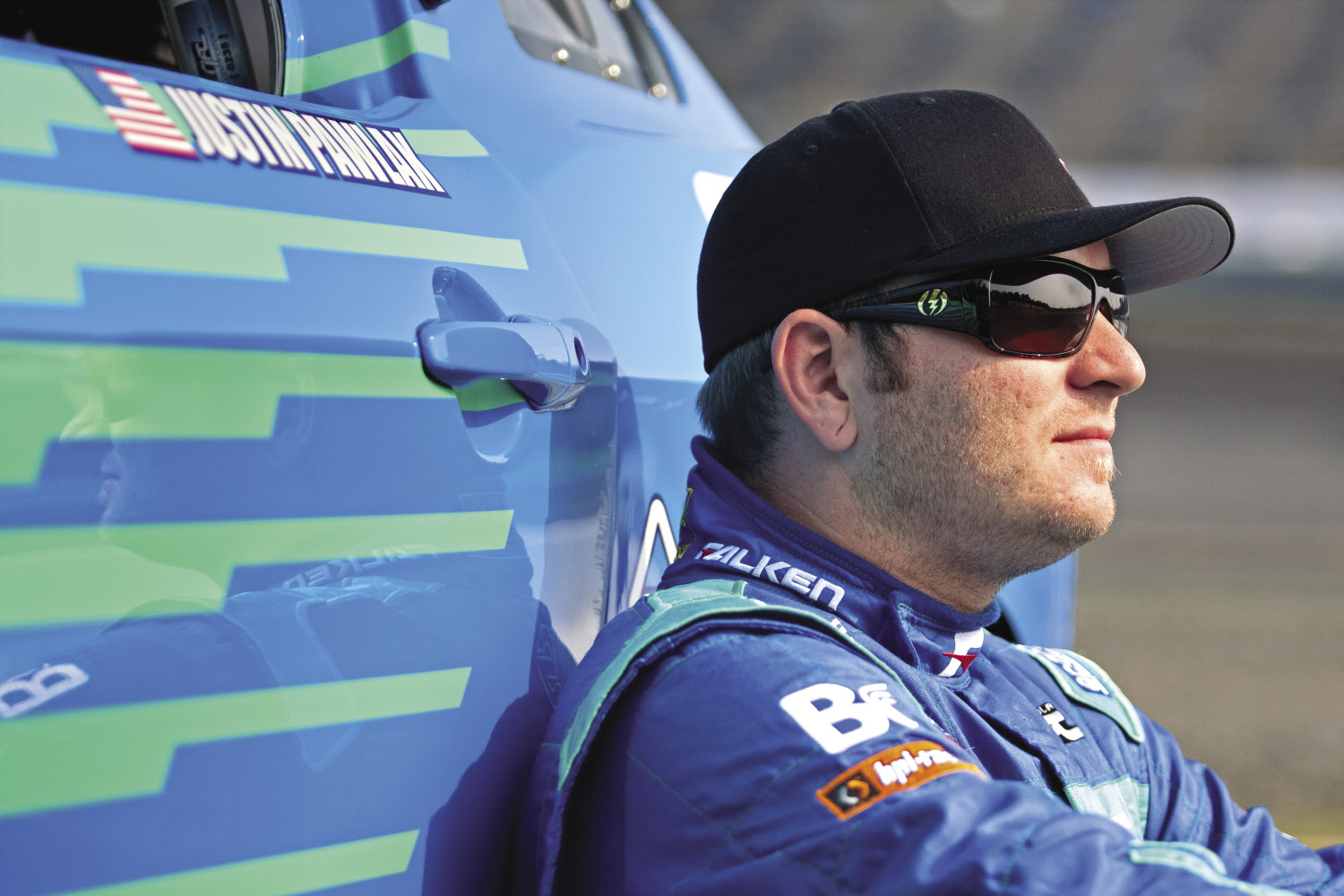 As for tires, Pawlak's car wouldn't be a part of the Falken squad without a set of the company's best. They have matched up the Falken AZENIS RT-615K, a street-legal competition tire compound, against 18-inch HRE C21 three-piece forged racing wheels. Gittin Jr. and Daijiro Yoshihara both won championships driving on the RT-615K, so to say these are race-proven tires is a bit of an understatement.

Beating at the heart of this thoroughbred is a Ford Racing 410 cubic-inch V8 engine built by Roush Yates. It's the same configuration found in a World of Outlaws Sprint Car with some minor tweaks by ASD. First, there's a set of K&N air filters on top of the Kinsler ITBs, a Kooks header and custom four-inch ASD exhaust handles the breathing side of things while a MoTeC M800 ECU governs the fuel injection and ignition timing. The result is a mind-numbing 845 horsepower and 632 lb-ft of torque, capable of revving all the way up to 8300 rpm.

Pawlak takes shifting duty personally, gunning through the four-speed dog box transmission while the power is sent back to ASD's specially designed live rear axle. Finally, the radiator has been moved to the back of the car and the area that once allowed rear passengers to tag along is now occupied by six fan-driven ducts that feed air to the massive cooling unit from the roof and rear quarter windows.

Stopping duty is left in the capable claws of some custom-built Wilwood brakes just for this application. Six-piston calipers hug the front brakes while dual two-piston calipers take care of matters in the rear, one of which is designated just for the handbrake. The suspension is comprised of Tein competition dampers that are also fabricated to ASD's specification with a remote control unit mounted into the dashboard. 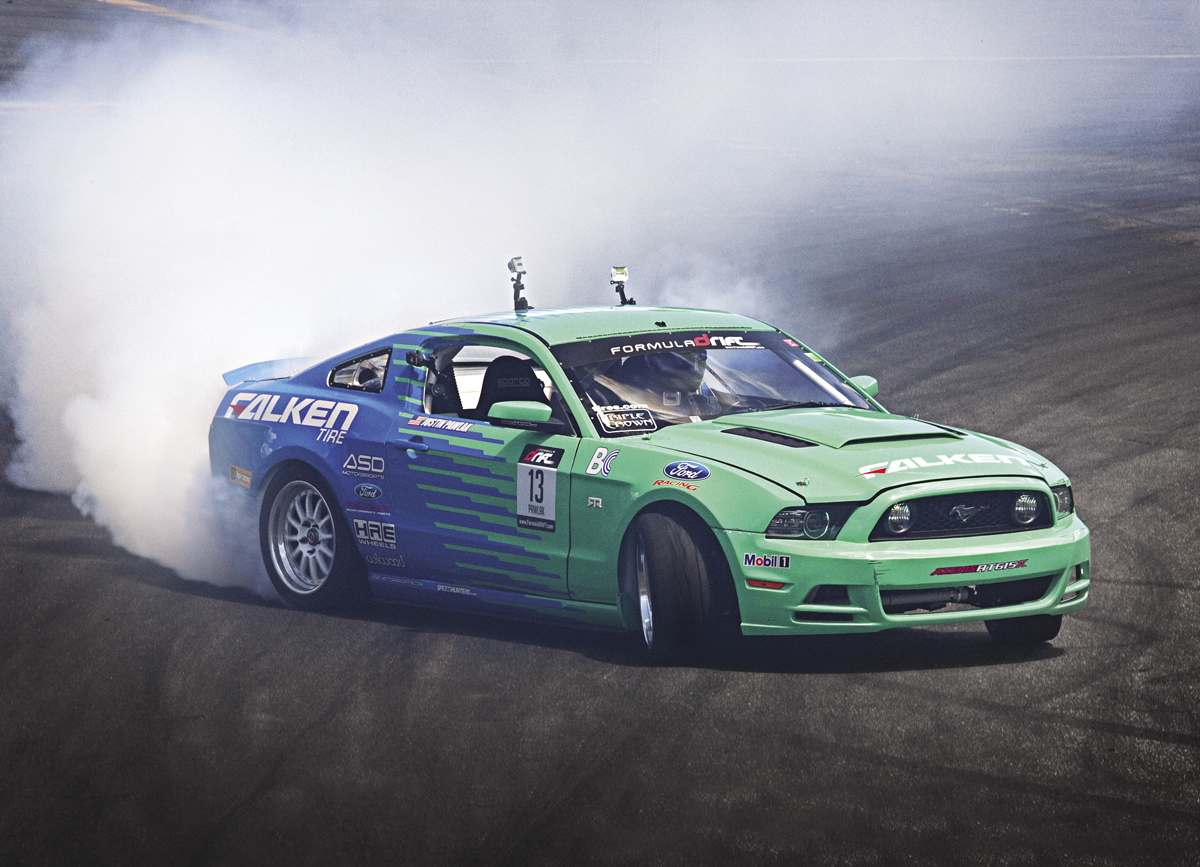 Inside, Pawlak's office is graced with Sparco's Pro 2000 bucket racing seats and harnesses along with a Sparco steering wheel. The traditional gauges have been removed in favor of a MoTeC Sport Dash Logger (SDL), a single display that can be programmed for numerous readouts. In addition to the standard stuff like speed and engine rpm, the SDL can even give a warning alarm for minimum and maximum velocity for cornering. Points are earned with Formula D's judges for maintaining a predefined entry speed, so this is a valuable asset for any pro looking to know exactly when they have reached the desired mark.

If a team can give its driver the perfect car, that driver will have the best chance of succeeding. So far, Falken's Ford Mustang has been just the tool to allow Pawlak to overcome competition from around the world and stand atop drifting's premiere stage.

“(The Falken Ford Mustang) has definitely changed my opinion of what a drift car should be,” Pawlak said when interviewed for this article. “It is by far the most competitive platform I've ever driven and I feel blessed to have the opportunity every event to get behind the wheel of it!”

Keep an eye out for Pawlak's ride at the head of the pack when the Formula Drift circuit heads your way in the future. With the support of his family and newborn son, there is no limit to where he could go.