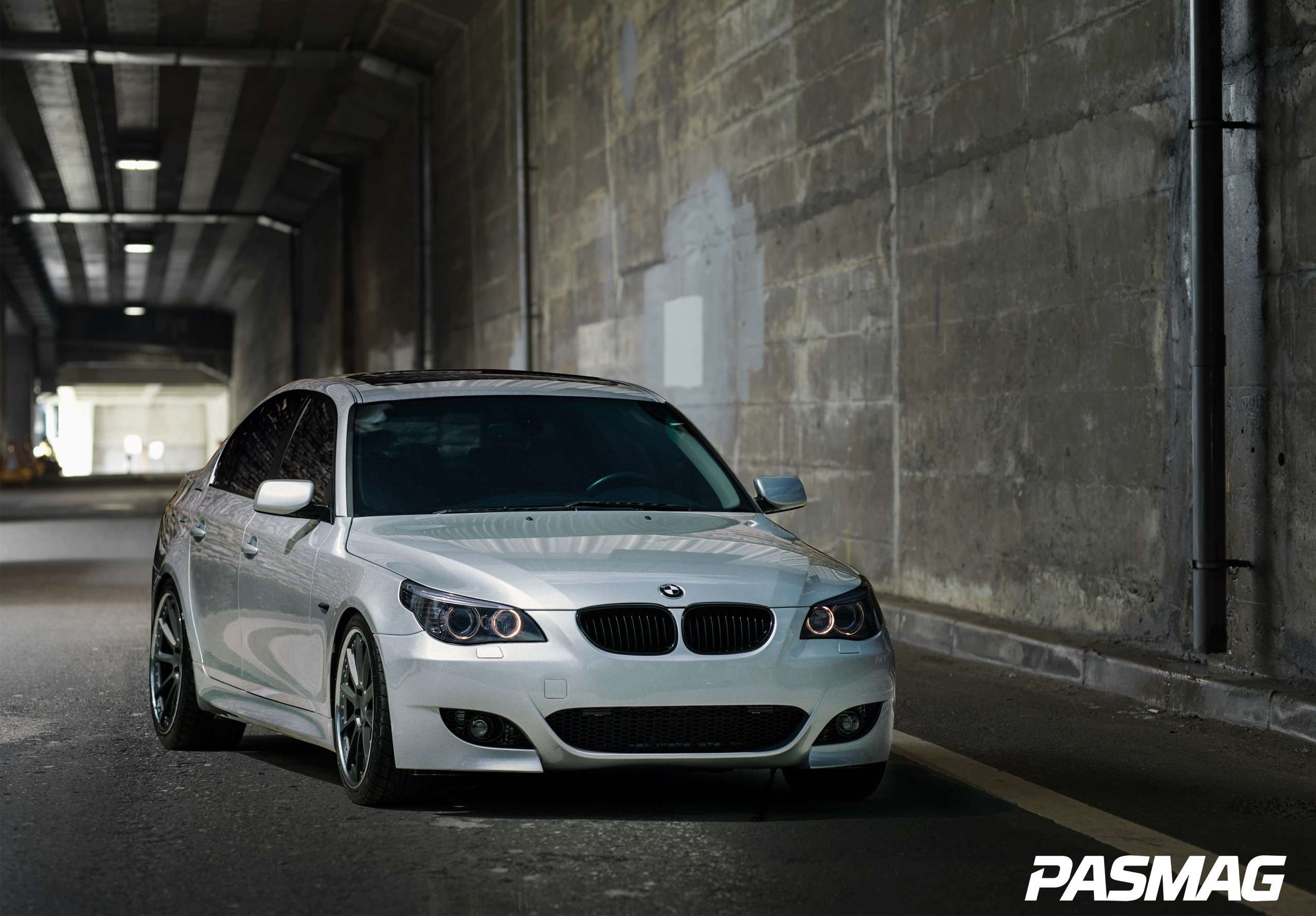 Buwalda purchased this CPO 2009 BMW 535xi in late 2012 and immediately put in motion an aggressive plan to increase the 300 horsepower from the twin-turbo 3.0L inline six. Extensive bolt-on mods include every platform-specific part for the 535xi from the Burger Tuning catalog. Custom Performance Engineering (cp-e) Cooling Mist methanol injection and a four-inch custom stainless exhaust result in a significant bump in power – enough to regularly thrill Buwalda and passengers in low 11-second passes on the quarter mile.

With the AWD platform, N54 motor set, and BMW’s legendary attention to detail, the 535xi goes about its business without fanfare - save for the exhaust note which immediately grabs attention.

We admit, we love Buwalda’s style. It’s custom without appearing to be extensively modified. MTech grills, bumpers and spoilers are painted to match the factory Titan Silver paint. It doesn’t look like a stock 5 Series at all, but it still looks perfect. The next step was stance - KW Varient 3 coil overs and extensive control arm upgrades ensure the car sits proper on the 20-inch Forgeline wheels, but also puts the power to the ground efficiently.

Turning to the audio system, the heart of the build, Buwalda and the Auto Salon crew came up with a simple, yet elegant plan to maximize audio performance. Because the source unit in the BMW can’t be removed, Buwalda and the m0-bridge crew in Australia implemented a prototype M1000-M-DA3 fiber optic interface to take the digital signal from the head unit and convert it to a full-frequency analog signal, which is then connected to a Helix DSP processor. Low, mid-range, and high frequencies are sent rearwards to a pair of classic Xtant X603 amps and three JL Audio 750/1 mono block amplifiers.

Each of the three 15-inch Hybrid Audio Technologies Clarus-series subwoofers are mounted on a custom fiberglass and leather-wrapped baffle in the trunk. It has its own JL Audio amp, which products a total of 2,250 watts available for the subs, or enough to flex the roof of the car two inches at 22 Hz. The output of the subwoofers vent into the interior through the ski pass-through between the rear seats.

Hybrid Audio Technologies offers a unique solution for high frequency reproduction – its L3SE mid-range/wide bandwidth drivers offer impressive high frequency sound reproduction that eliminates the need for a dedicated tweeter. A set of these, with their mounting flanges machined off, are installed at the top of each door with the angles having been carefully adjusted for maximum high-frequency reproduction. For mid bass, the Salon crew brazenly opened up the stock under-seat woofer location to the exterior of the vehicle with a six-inch hole saw. A speaker grill covered in a weatherproof and breathable Gore-Tex material keeps water out, but lets the 8.85-inch L8SE drivers breathe to the outside of the car for extended low frequency output. The eights are protected by custom extruded metal grilles beneath the front seats. The Xtant X603s are three-channel amps, but the front channels are bridged to provide 300 watts into the L8SE mid-bass while the rear channel provides 150 watts to the L3SE mid- ranges. One amp is dedicated to each side of the car, vertically bi-amplified for infinite stereo separation. The amps are staggered on a three-level amp rack, lit tastefully with white LED strips, and protected by half-inch tempered glass, all of which are protected by a custom trunk mat with an embroidered BMW logo. Having plenty of power means you have a lot of room for dynamics. The bottom line - it's always clean and plenty loud!

If you step back and look at the BMW, the countless hours of work done to the car aren’t readily apparent unless you have a stock model sitting beside it. This is a clear testament to the plan and execution of the project. The same goes for the audio system: the factory head unit, beautifully integrated speakers, and stealth installation combine to produce something that belongs.

How does it sound? Not too often do we get a chance to listen to the cars we feature, but I was fortunate enough to judge this very car at the 2013 IASCA North American Championships and Regionals in Huntsville, Alabama last fall. From the driver’s seat, the sound is natural and very real. It is extremely dynamic and well controlled. Given the power on tap, it seemed the volume had no limit. I didn’t open it up completely as there were many cars left to be judged, but it has pinpoint imaging, great staging and excellent frequency response; you really couldn’t ask for anything more from an audio system. The car had the highest Two-Seat Expert Division score at the event, which really wasn’t much of a surprise. Oh, and the exhaust sounds awesome!