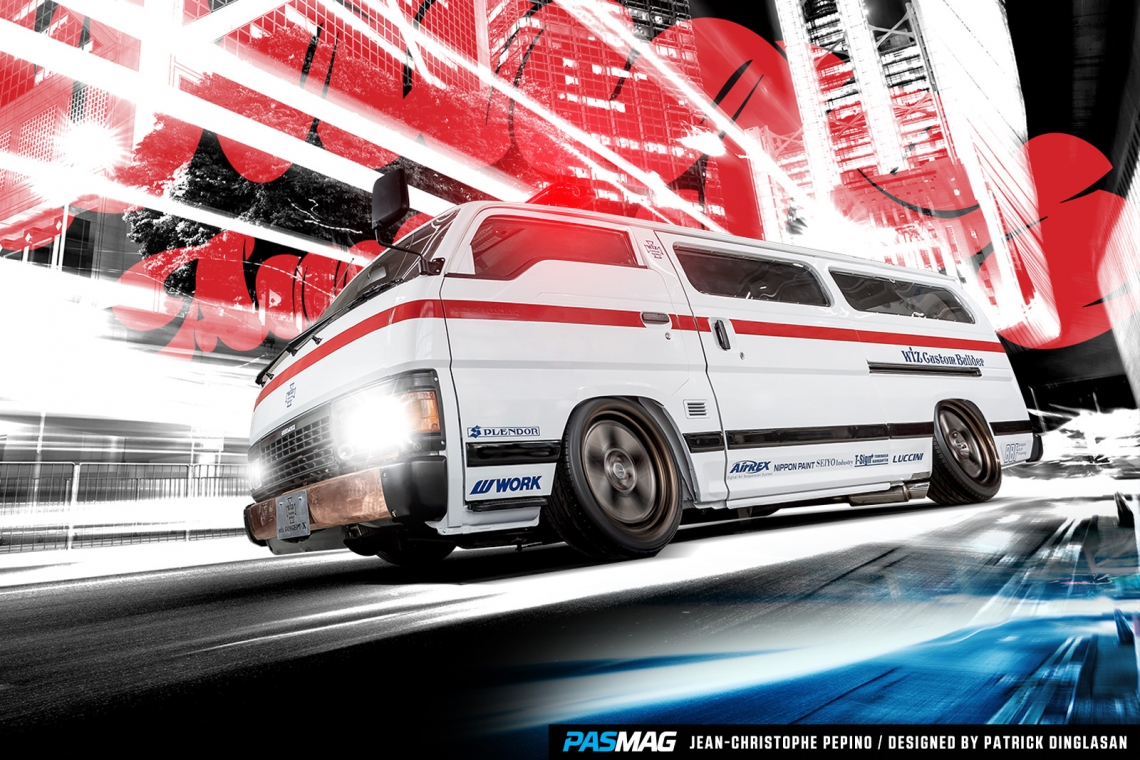 Usually, when you spot an ambulance, you’re jostling to get out of its way. Move over to the side of the road, wait for the lights to pass and hope that whoever they’re going to retrieve or drop off is going to be okay. But WIZ Custom Builder has taken the idea of the helpful ambulance and turned it on its head. If this low-riding Caravan were to come rolling up behind me, sirens blaring, I’d be pulling over to hop out of my car and head into the middle of the street in hopes of them plowing me over and picking me up so I could spend some time in the aptly-named “Danger Ambulance,” instead of pulling over to get out of its way. 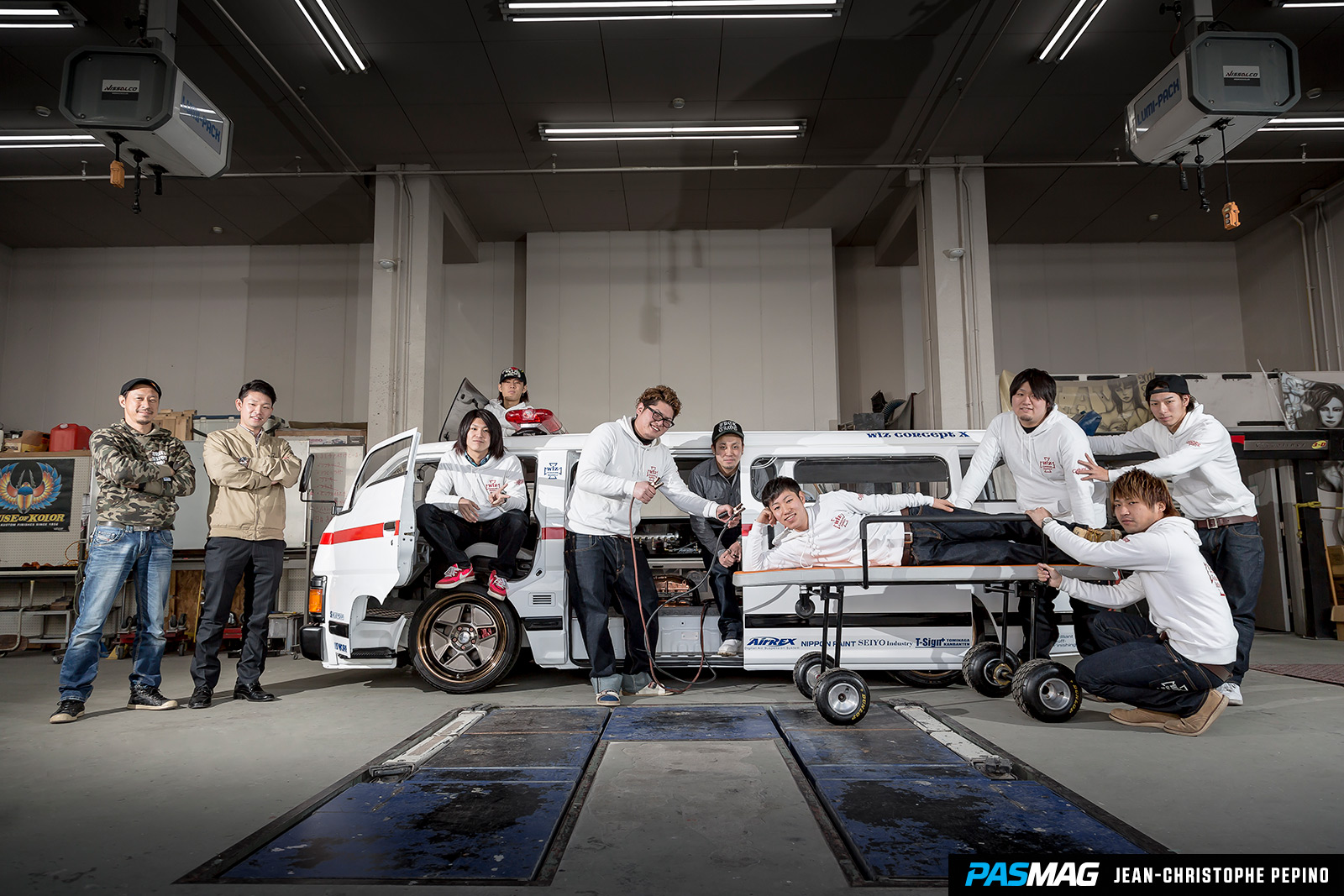 So, what exactly is it about the WIZ Custom’s ambulance that have people dying (I am both proud and sorry about this joke) to get into it? To begin to understand the cool factor this vehicle has, let’s start at the beginning – the builders. WIZ Custom Builder is a unique shop in the fact that all of its projects are built by a team of students and their teachers. That’s right, the Caravan you see here was built a class project. Makes you feel so much worse about the time you spent in school, right?

WIZ is a school dedicated to car mechanics, maintenance and modification. Students are taught the basics during their initial years enrolled in the school, with the option to move on to more complicated areas, like tuning and racing, available as they become seniors. 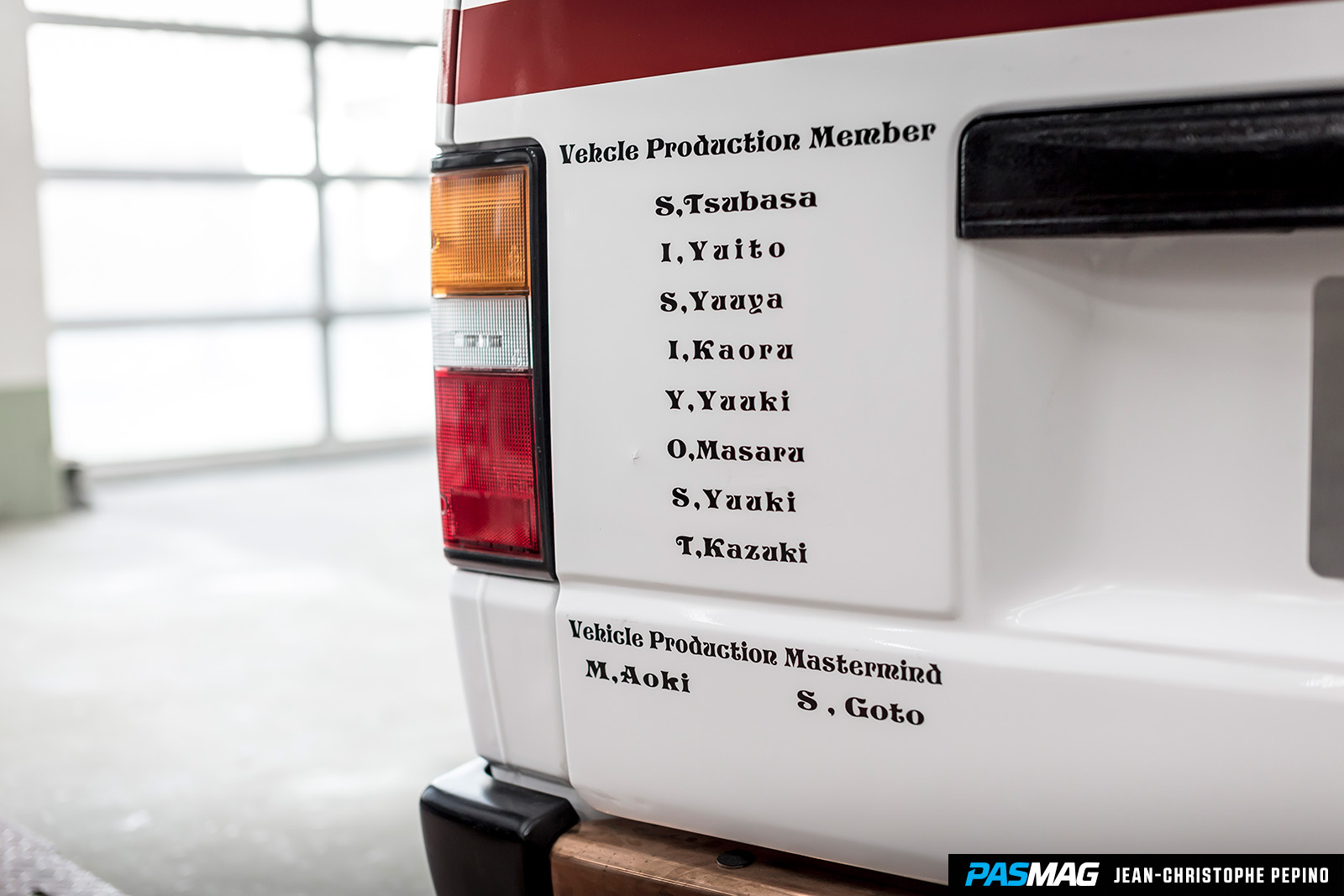 In fact, every year, senior students are encouraged to build a car to show off at Tokyo Auto Salon, something that the school has successfully done for 10 years now. And not only are they building some cool projects, they’re also building winning ones. In 2013, WIZ’s VW Beetle, which had been chopped and converted to an electric drivetrain, won an award for best concept!

For Tokyo Auto Salon 2016, WIZ’s group of eight students (vehicle production members) and two teachers (vehicle production masterminds) chose a 1988 Nissan Caravan as their vehicular canvas to turn into a spiced up ambulance. And while one may wonder why an enormous utility van from the late ‘80s would be the choice here, especially considering all that’s available over in magical JDM land, I, for one, am so glad they didn’t go with a Supra or GT-R and did something different. It just makes the build all that more special. 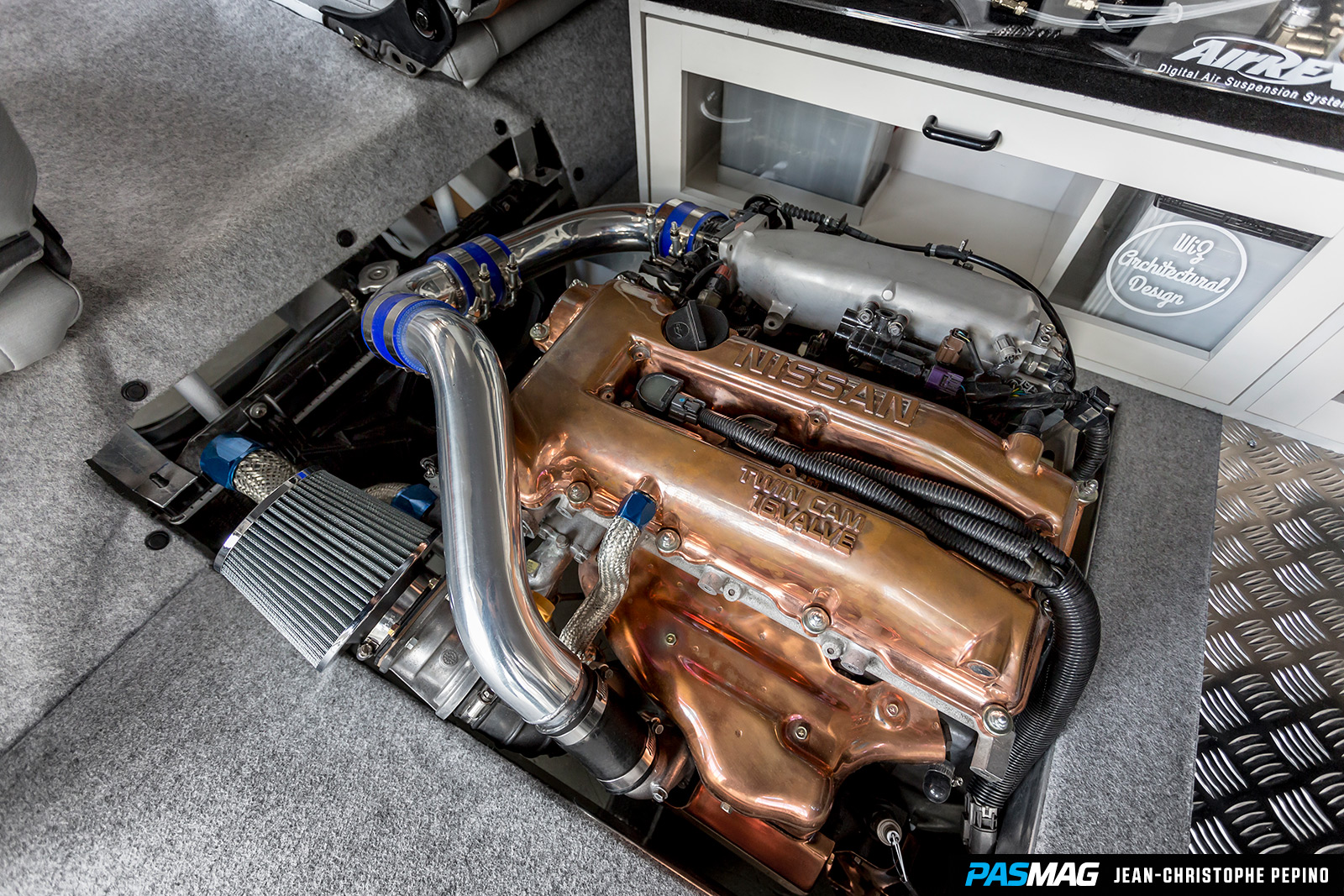 With the Caravan carrying the Nissan nameplate and having an FR layout, like most of Nissan’s most popular tuning platforms, WIZ wasn’t afraid to do some digging in the family parts bin. They swapped out the Caravan cross-members for replacements of the S14 variety and even ripped out the sluggish, 90-horsepower diesel engine and swapped it out for a single-turbo SR20 engine for about 130 more horses and way better noises.

Actually, the SR20DET is one of the most interesting parts of this build. For one, It’s been copper electroplated, like the bumpers outside, for a truly unique appearance. It’s also been mid-mounted in the van. The students at WIZ decided to move the heart’s location, and instead transplanted the SR20 behind the front seats and in front of the patient; something the team says was the most challenging part of the whole build. 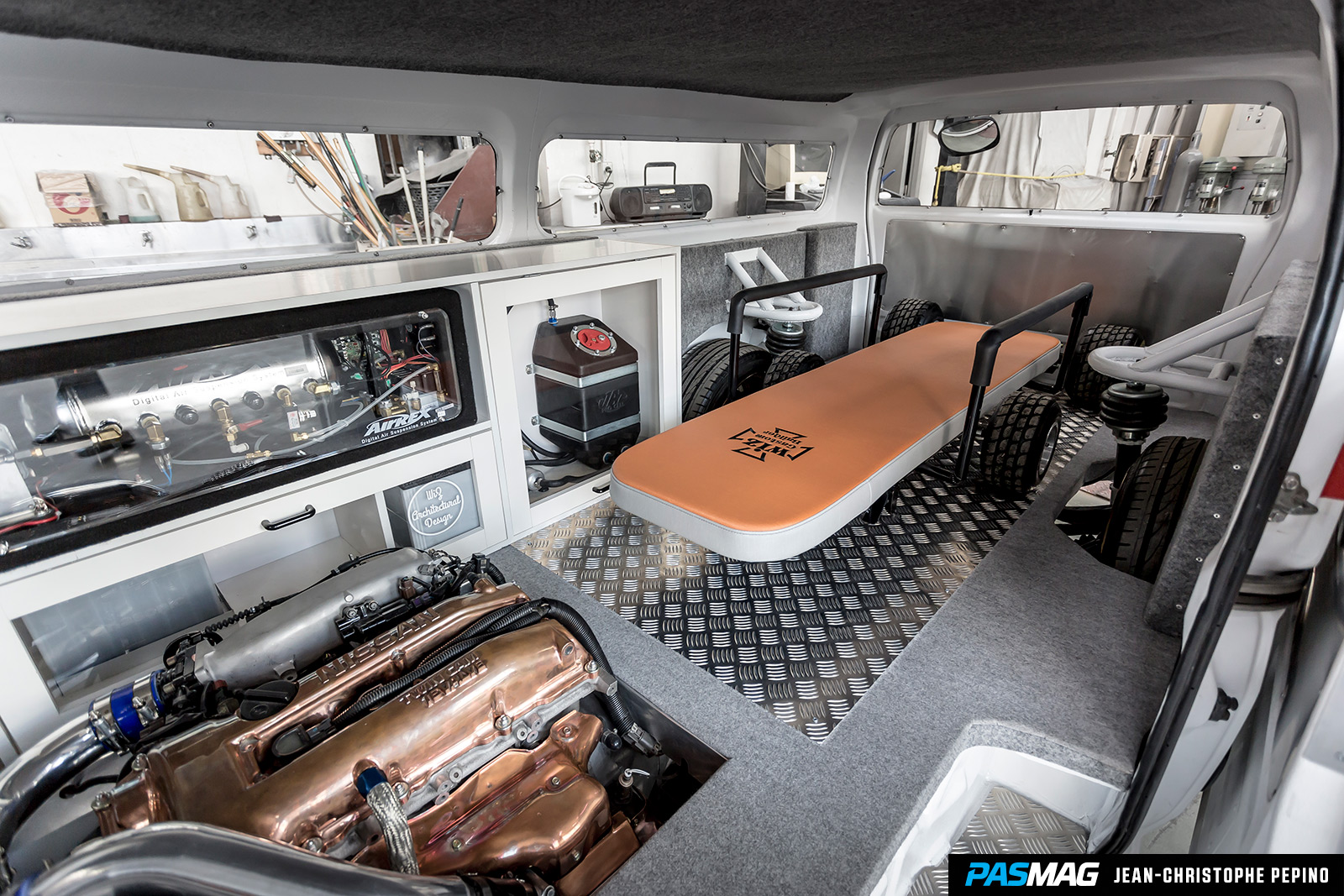 Accompanying the engine in the back is a custom fabricated, slammed stretcher with meaty tires stretched over some seriously small, dished wheels. At least you’ll look rad while dying on the leather upholstered pad, complete with WIZ’s logo stamped at the top. Beside the stretcher, on either side, are cutouts in the floor for the lower custom suspension mounting points, so you can watch the air billows on each of the air struts fill or empty of air as the terrain changes. You can even see the AirREX management behind a clear glass panel, where important medical tools and supplies would normally sit.

From the outside, the Caravan looks like an ambulance that might be sent out onto the battlefield after a Mad Max battle. The roof has been chopped 10 inches, in true hotrod style, and the air system paired with the relocated suspension mounts gives the Danger Ambulance a seriously low-slung stance. Each of the Caravan’s fenders squat down over a set of 18-inch WORK Seeker NX wheels, sporting a bronze barrel to match the electroplated copper bumpers, and tilted slightly in the front and then much more aggressively in the rear.

The ambulance is finished off in a custom medic paint job, with a special section on the rear that is reserved for each of the build team’s names. And yes, the sirens up top totally work.

The senior class at WIZ Custom Builder has done it again and built something show-stopping for their 10th year at Tokyo Auto Salon. A source from WIZ tells me that an 11th concept is in the planning stages, but if it’s not an ambulance-themed vehicle, what exactly are they supposed to take the judges home in once they knock ‘em dead? #PASMAG 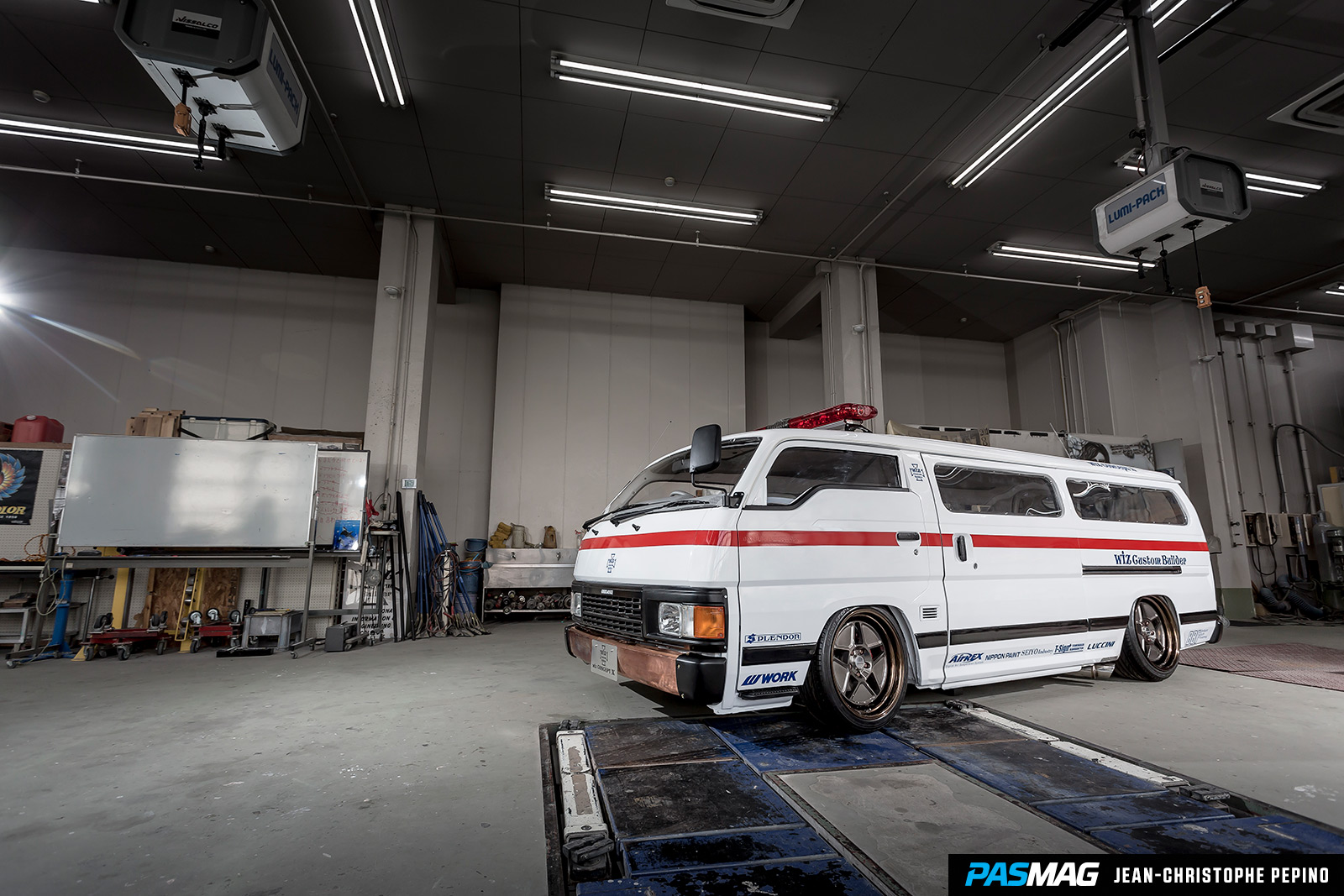