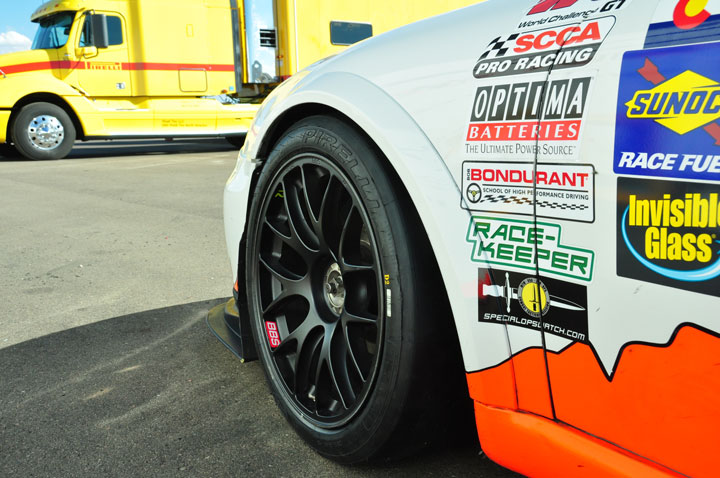 Teams and drivers, representing the GT, GTS and Touring Car classes, came away from the test with grins ear to ear. The move from a street-legal tire to the P Zero racing slick enable World Challenge competitors to experience marked improvements in grip and speed. Teams participating in the test included 2010 Team Champions K-PAX Racing and RealTime Racing. World Challenge teams were realizing three to four second improvements over base tire comparisons. Drivers noted the ability to drive hard, yet feel controlled at the limit.

The excitement displayed by teams and drivers was palpable.

"I wasn't sure I was coming back next year, but this tire just made my decision,” Jason Daskalos, Team Owner and Driver of the No. 5 Daskalos/Roberts Racing Dodge Viper, said. “They are such a thrill to drive on, I want to go racing right now."

Randy Pobst, who piloted the No. 6 K-PAX Racing Volvo S60 to the 2010 GT Drivers’ Championship, is among those who had asked the series to move to a race slick from the traditional street-based, race compound tire.

“These Pirelli P Zero racing slicks are a terrific and appropriate match for the high power and weight of our World Challenge GT cars," Pobst told officials at the test, referencing the new tires as a significant draw for teams and drivers to join the series.

With the tire test, the World Challenge Championships have turned an eye to the 2011 season, after a 2010 season that crowned a Drivers’ Champion and a coveted Manufacturers’ Championship in each of three classes during the 12-race season, the largest in Series history.

For more information on the series, go to www.world-challenge.com

Mopar Power: Antony Morfin's 2011 Dodge Challenger
Photography by Nathaniel Cason (@nacho_photoss) Athony Morfin received 55% of the Popular Vote and is the winner of the PASMAG Tuner...

Rising Sun: Star Road’s “Sunkist” S30Z Masterpiece
Photography by Adam Zillin (7tune) It’s the brightest, most vivid shade of orange I’ve seen on a car in a long time and is reminiscent of the...

Streetcar Named Desire: Clement Ng's 2009 Audi R8 Owner
Photography by Jade Nelson The LMS-Built R8 Daily Driver Those of us with octane flowing through our veins have definitely dreamed of taking a...

Captain America: American Independence At New Heights
Photos by Joel Chan The words “dually” and “slammed” are not frequently found in tandem with each other, much less on the same truck, but the...

Diamond for the Rough: Calvin Eng's 2011 Mercedes-Benz G Wagon
A G Wagon That Isn't Instagram Famous. Over the years, you could say the Mercedes G Wagon has lost its reputation as the bad boy in town. Back...

One Love: RWBHK's 1990 Porsche 911 Carrera 964
Photos by Linus Lam In the heart of Chiba, Japan lies a shop completely unbeknownst to the untold eye. Operating as the workplace, and often,...