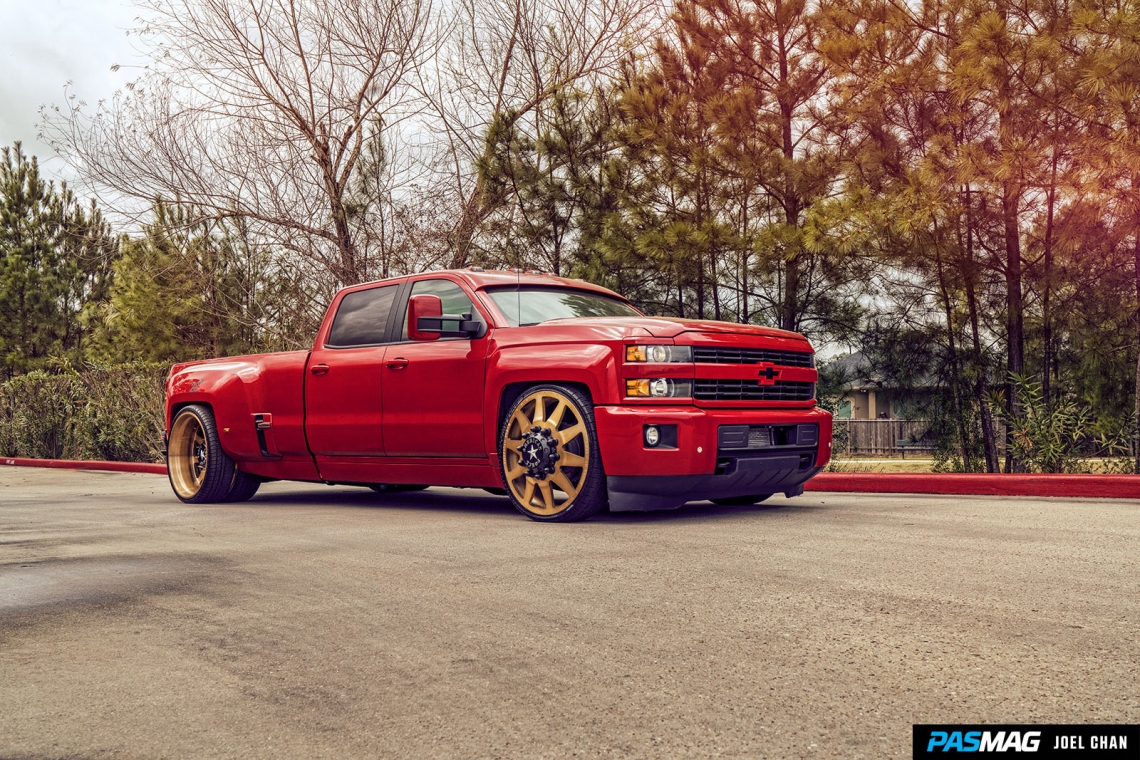 The words “dually” and “slammed” are not frequently found in tandem with each other, much less on the same truck, but the folks at American Force aren’t exactly the conventional builder type. When the industry leader in the off-road forged wheel category branched out into American muscle applications for the 2015 SEMA show, they needed an equally impressive rig to tow that project into the show. Enter the Chevrolet Silverado 3500HD LTZ dually. 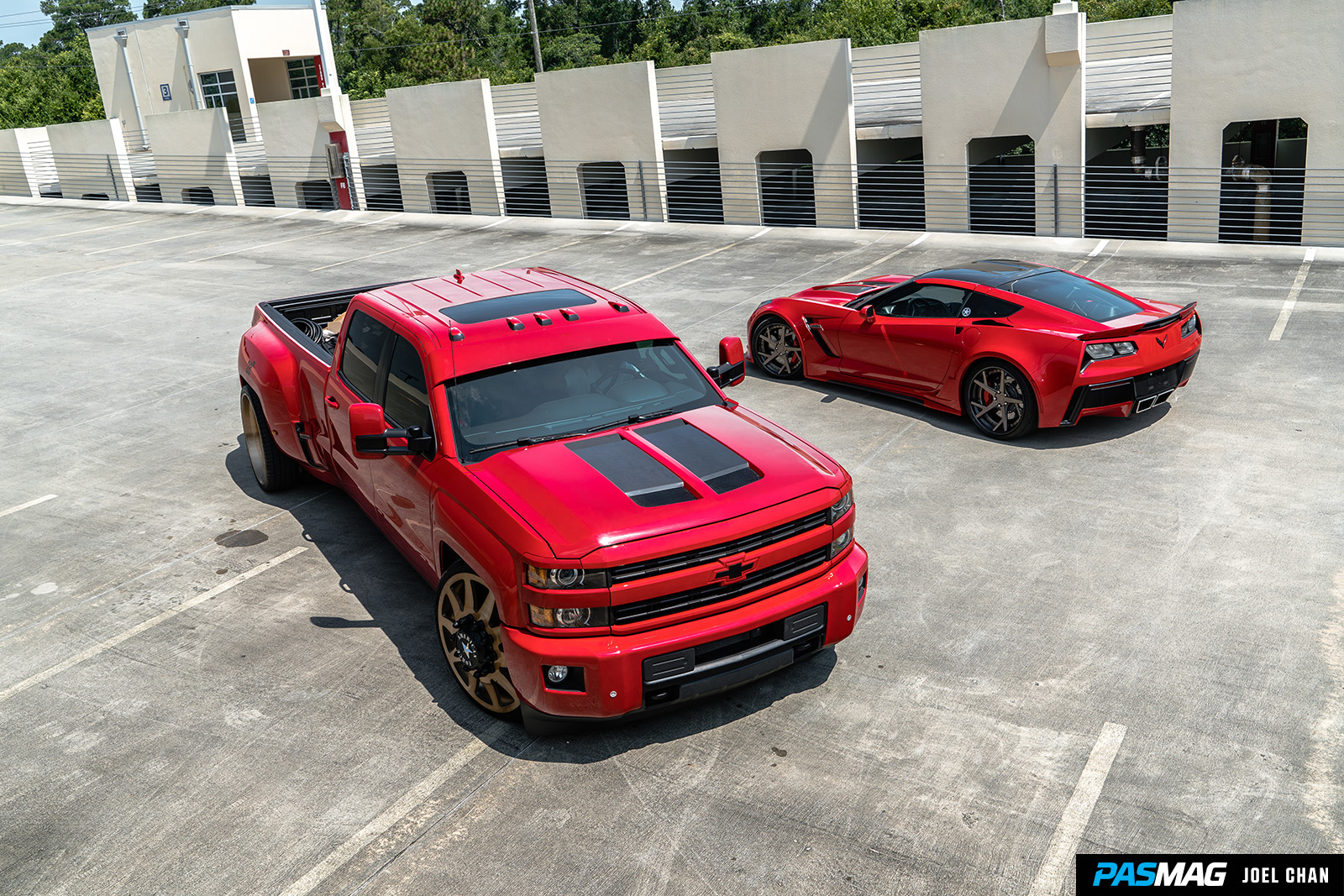 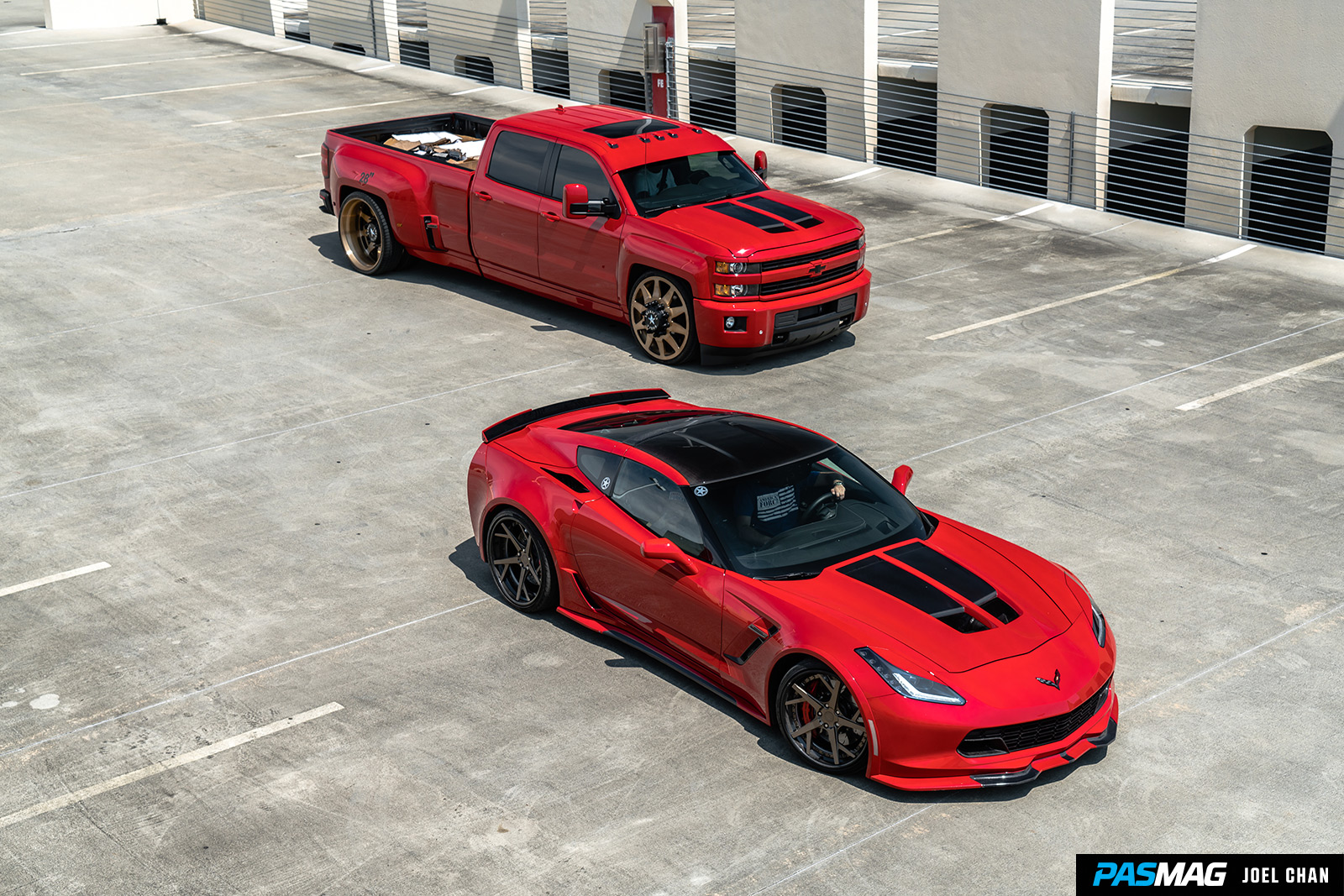 To show off their sports car line of wheels, American Force’s team chose the quintessential badass American sports car: A bright red Corvette Z06 – a white knuckle sports car with an entrenched American racing history. The Corvette was adorned with an eye-catching set of forged wheels, featuring a carbon fiber barrel and a bold brushed gold face. This setup would go on to be the SEMA show face of American Force Muscle, the new branch of American Force.

With such a show-stopping car set to decorate their booth, the guys had to be sure that the truck wheels, the company’s bread and butter that brought them to the show, would not be overlooked. In order to remind show attendees that American Force is still an industry-leading innovator in the forged off-road wheels segment, the team produced another first: The first 28-inch forged dually wheels on the market. With intent to deliver shock and awe, the brand’s Independence wheel design was brought to new sizes, and finished in the same bold brushed gold found on the wheels of the Corvette.

In order to ensure the Silverado turned as many heads as their Corvette, the team opted for a matching theme across both platforms. With the wheels of both vehicles met with the same finish, the next step would be to paint-match the truck to the Corvette’s stunning candy red – a combination sure to appeal to every red-blooded American. Interior trim was painted in the same color in order to carry the theme inside the cockpit of the tow-rig, where you would also find a hidden CT Sounds low-profile subwoofer if you looked hard enough. 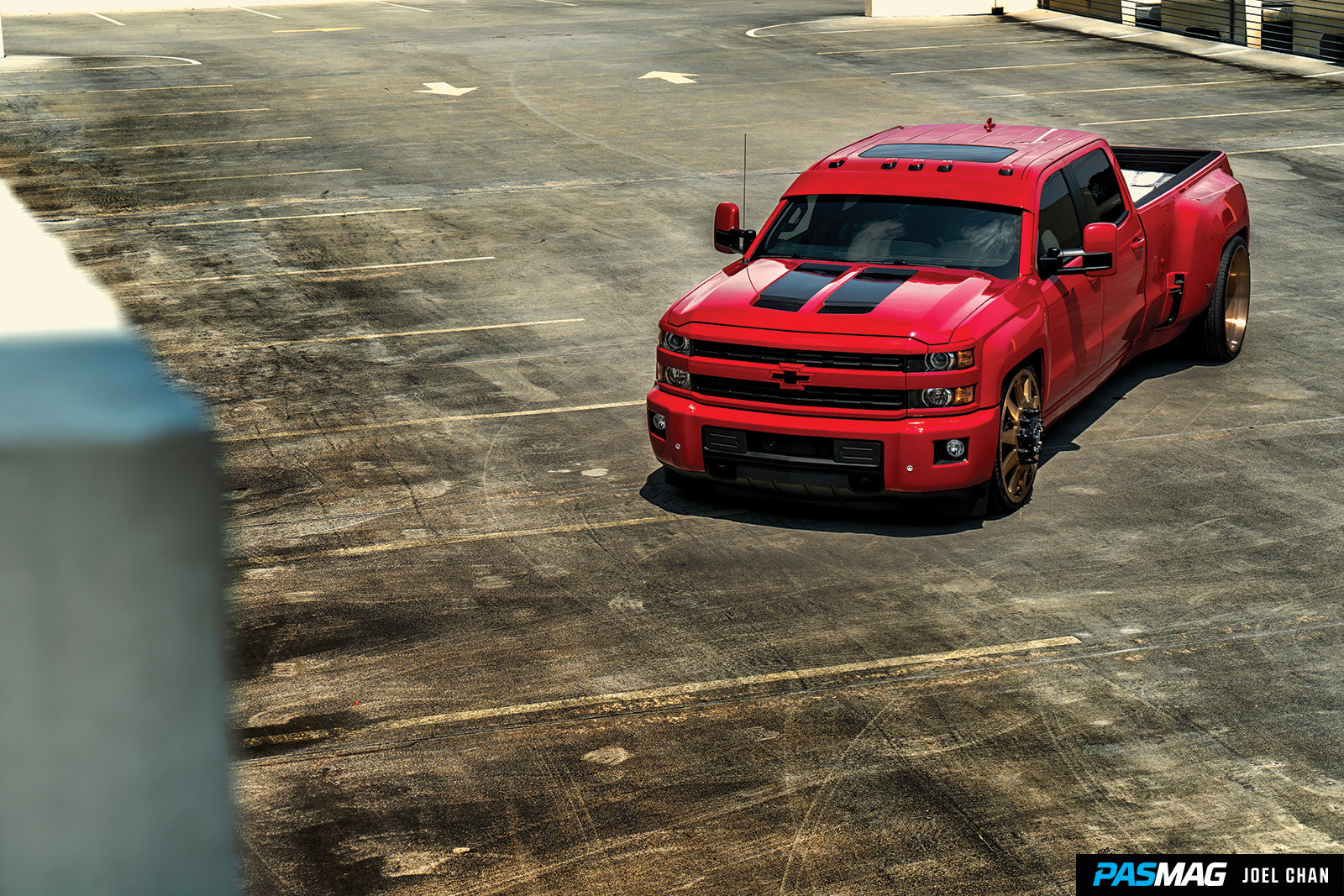 Finishing off the rugged exterior look is a one-off custom carbon fiber hood, a paint-matched front window visor, and some cool custom side-vents reminiscent of the vents on the Z06, which were installed in the rear fenders in front of the wheels. Between the custom additions to the truck, and a multitude of carbon fiber goodies on the Corvette, the duo was officially looking show-ready.

The truck then underwent some off-the-wall upgrades in order to achieve a show-stopping look while maintaining its purpose-driven functionality. Being a 4x4 dually, most owners would only be thinking in one direction when it came to suspension: Up. If the truck was 2WD, moving the suspension travel lower is a relatively easy task, but most 4x4 owners would never consider slamming the truck. The big appeal for many owners is the potential to sit at transport truck ride heights. However, the American Force team didn’t get so well-renowned by following the crowd. 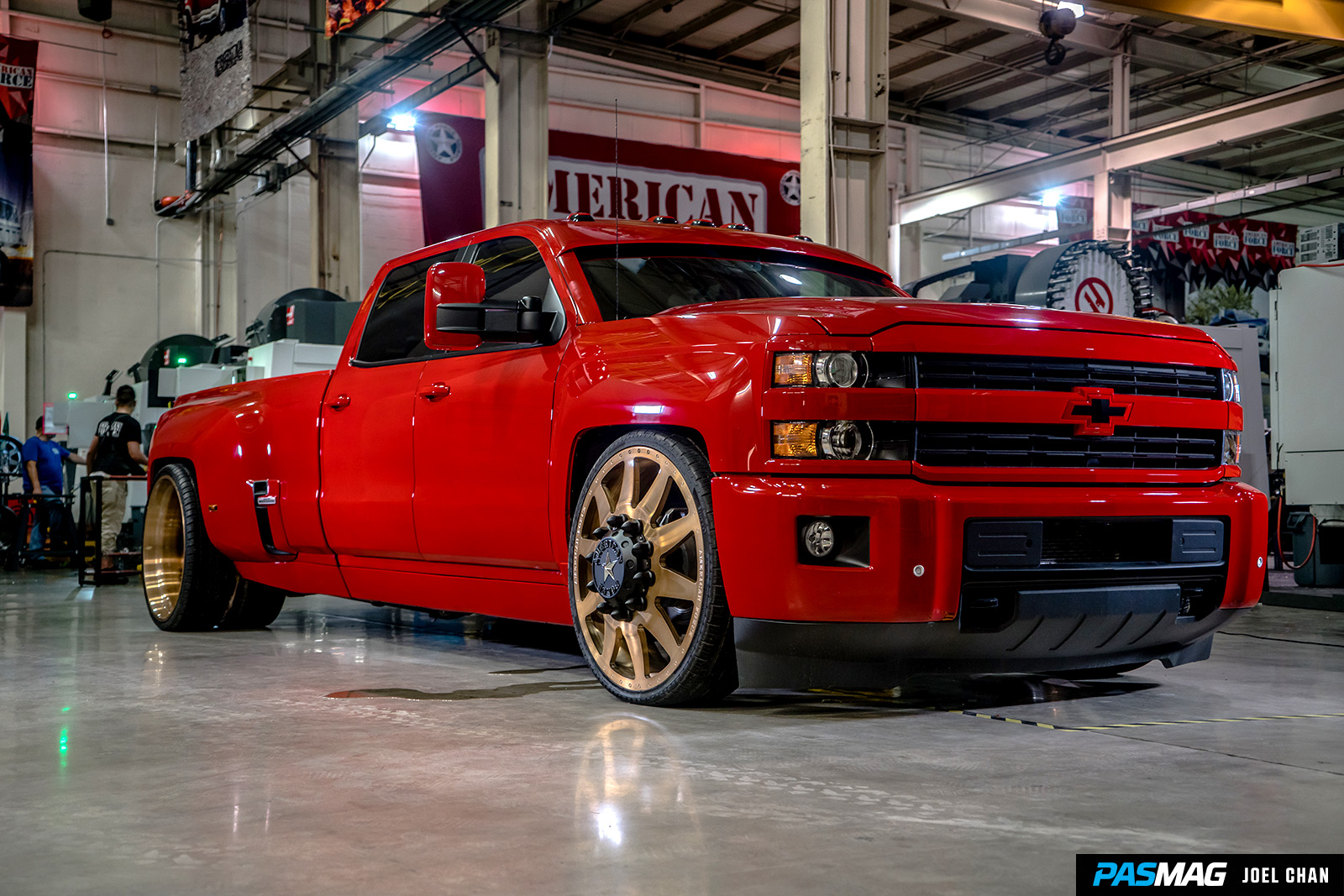 Instead of lifting the truck to skyscraper heights, the team at Hulst Customs was enlisted to drop the truck as low as it could go with some precise custom work. A Loadlifter setup from Airlift was installed in the rear in order to make towing as easy as possible, and a set of One Up Offroad traction bars ensure that the 4x4 functionality of the truck is able to do what it does best. An unconventional truck by any standards, this dually Silverado stands out in any scenario.

The end result of all this custom work, careful planning, and a killer color combo is a pair of vehicles that steal the show wherever they go. The Corvette did well to introduce American Force Muscle, and the Silverado 3500HD did even better as a show-piece and torque-boasting tow-rig. Even today, nearly a full year since its debut at the SEMA show, the truck turns heads and draws a crowd.

What is especially nice about this truck is that it makes a bold statement and looks incredible without being over-the-top-in-your-face like a lot of show trucks, showing that sometimes less really is more. Be it the all-American badass styling, or the less-than-common ground-level dually platform, this truck is as American as apple pie. #pasmag 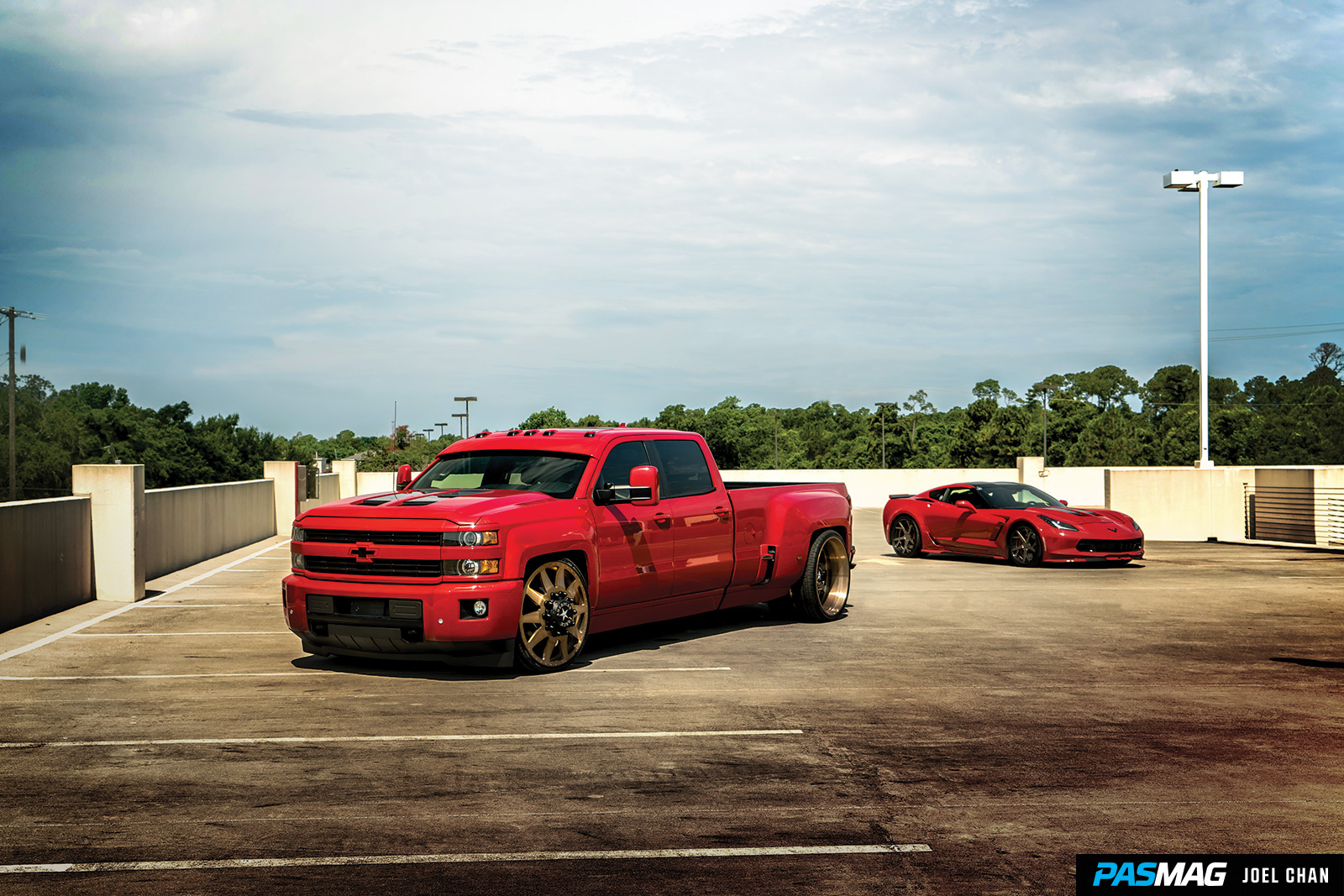 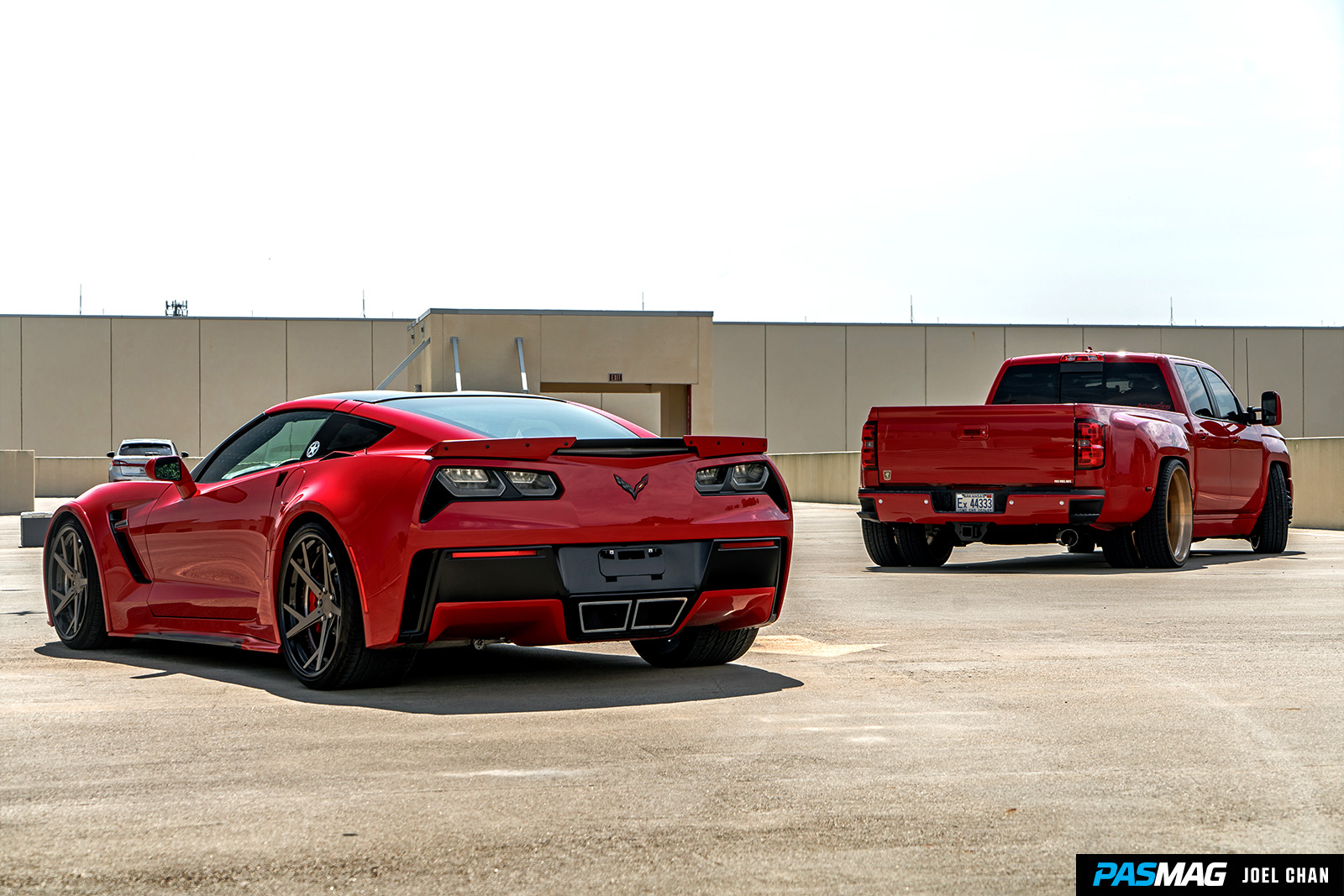 PASMAG #159 / Trucks Vol. 10
We’ve done it once again - we combined two PASMAG issues into one in order to cram as much fun content into these pages as we could. The first-half...

New Eibach Kits Available for the 2020 Toyota Tacoma
Built upon decades of off-road racing victory, the Eibach PRO-TRUCK-LIFT combines a series of springs and shocks to create a perfectly tuned...

Turbosmart BOV Vee Port EM Blow Off Valve for all Ecoboost Ford F-150
Simply remove your factory valve and screw in the Turbosmart VeePort EM and you’re on your way. Turbosmart has taken their award winning, patent...