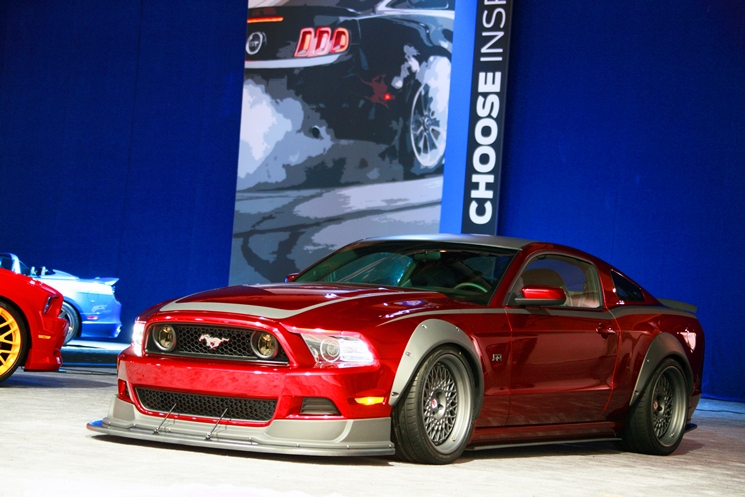 The tire-slaying Mothers® Ford Mustang RTR Spec 3 is on display at the SEMA Show in Las Vegas, and will be auctioned for charity by its co-creators Mothers® Polish and drift champion, Vaughn Gittin Jr., following a year-long national road tour.

The team at Mothers® Polish is excited to collaborate with Gittin on the Mothers® Mustang RTR Spec 3 project. "We discovered a few years back that we share the same driving passion for speed and performance, as Vaughn brought life to our simple wax commercial with his professional drifting skills," says Jim Holloway of Mothers®. Over the past show season, Mothers® campaigned an RTR Mustang on its big rig show circuit, and "we enjoyed displaying it as much as driving it on the Hot Rod Power Tour," exclaimed Holloway. Those experiences spawned discussions which led to this collaboration. "The bonus is we're taking the car to the 2014 Barrett-Jackson Collector Car Auction in Scottsdale, with proceeds going to the Barrett-Jackson Cancer Research Fund at TGen. This project takes the excellent foundation that Ford provides in the Mustang to the next level of excitement with Vaughn's standard RTR package. Then Team Mothers® took it again to the highest level with the RTR Spec 3, and it supports a cause that has great meaning to our family as well as the Jackson's."

Based on the Mustang RTR Spec 3 that will be officially launching in January of 2014, the Mothers® Mustang RTR Spec 3 showcases the latest aftermarket technology in chassis and engine development, composites, aerodynamics, paint, and audio, coupled with streetable track-proven performance. The project is a true team effort consisting of some of the best builders and product manufacturers in the business.

Many of the performance and engineering modifications were done at Autosport Dynamics (ASD) in Charlotte, North Carolina. ASD is RTR's partner for performance product engineering, and also maintains and runs Gittin's competitive Formula Drift efforts. Many of the Mothers® Mustang RTR Spec 3's finishing touches were performed in California by Mothers®, with the help of many longtime partners, including HRE, BASF, Magnaflow, American Racing, Stitchcraft, JRi, Reus Systems, Whiteline, Deshler's and Kelly & Son.

Having vehicles done in special hues of red is a tradition at Mothers®, and this build is no exception. The BASF R-M Onyx two-stage Candy Carizzma waterborne paint is a custom "Mothers® Red" formulated by Chris Guinn, and sprayed by Deshler's in Orange, California. Graphics were painted by Mitch Kelly of Kelly & Son the Crazy Painters in Bellflower, California. Complementing the paint, special upholstery was mastered by Stitchcraft Custom Interiors of Westminster, California.

HRE Performance Wheels are standard equipment on the Mothers® Mustang RTR Spec 3 with HRE 501s for the street, plus an optional set of HRE's extremely strong and lightweight C101 wheels, for high-grip apex-hugging track duty.

Among the standard features is the Reus Systems audio package featuring a stunning high-power multi-speaker system where the sound is “the closest thing you can come to having an iPod player wired directly to your brain,” says Rick Reus. This is a production system that, in keeping with the performance level of the car, will rival any aftermarket system regardless of cost.

The Mothers® Mustang RTR Spec 3 is featured in the Ford Motor Co. display area (Booth #22200) during the SEMA Show.

Following the show, Holloway will pilot the Mothers® Mustang RTR Spec 3 in the OPTIMA Batteries Ultimate Street Car Invitational to test its performance capabilities at Spring Mountain Motorsports Ranch in Pahrump, Nevada. The Mothers® Mustang RTR Spec 3 will go on tour with the Mothers® big rig  through the entire 2013 show calendar until it goes across the Barrett-Jackson auction block for charity in January, 2014.