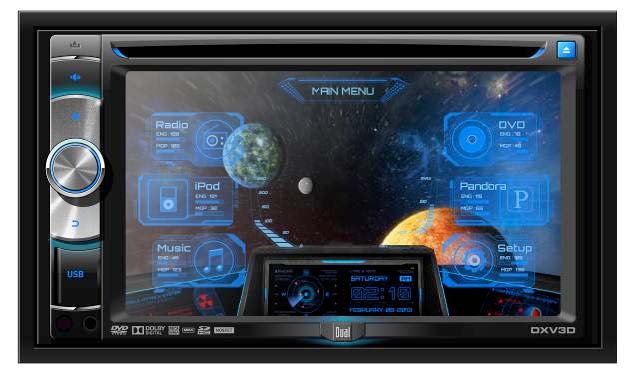 The new products include the industry’s first multimedia receiver featuring UltraMotion display technology with customized menu and interactive graphics, the Dual Mirror™ feature and Pandora Internet Radio connectivity for the iPhone. All new products will ship in Q1 of this year, and will be on display during the 2013 International CES in Booth 914 in North Hall of the Las Vegas Convention Center.

“The introduction of the new receivers is an innovative complement to our expanding catalog of in-vehicle audio/video products,” said Jim Braun, President and CEO, Dual Electronics Corp. “Cars continue to be a hub for entertainment and we are committed to bringing convenience, functionality and performance to our consumers.”

The flagship DXV3D (MSRP $349) DVD Multimedia Receiver with UltraMotion Display features a 6.2” high-definition digital LCD with swipe, flick, and drag and drop functionality, which allows the user to rearrange the menu icons for custom look, and to interact with 3D-like graphics. Dual is the first manufacturer to introduce this tablet-like functionality in automobile multimedia receivers. The technology is powered by Dual’s 3D graphics engine featuring an ARM Cortex TM-A8 single core 1GHz CPU. The receiver is also Bluetooth-ready, and its SD and USB inputs support 1080p playback. Direct control for iPod/iPhone devices is available through the USB input on the front.

Two head units control the Pandora Internet Radio app on the iPhone connected via USB input on the front of the receiver. The head units will display artist, album, song information, station list, and will also allow for thumbs up and down navigation and bookmarking for songs/artists. The Pandora control feature is available on the DXV3D multimedia unit and the XDVD761 CD receiver.

Additional information on the products: