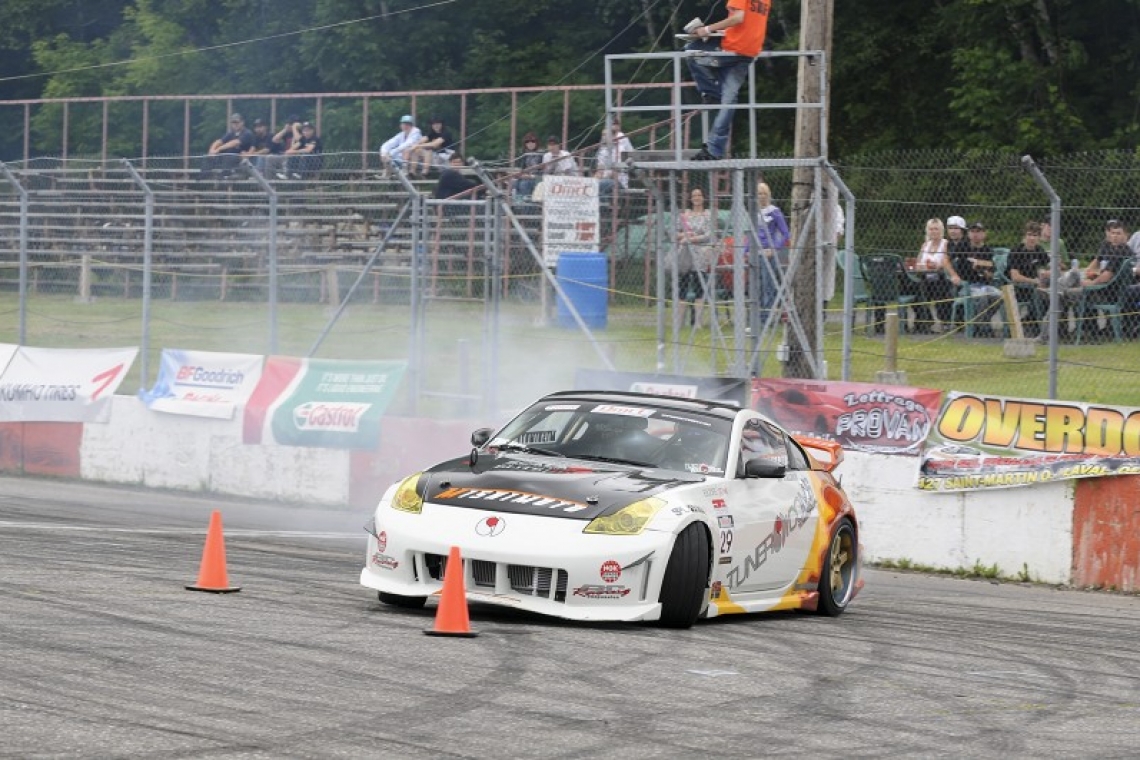 Drift fans packed the stands at Riverside Speedway as round three of Drift Mania Canadian Championship (DMCC) got underway. The hardcore Quebec fans are very passionate when it comes to supporting the drift scene in Canada, as DMCC has quickly grown into a very large and respected series across the country.

A high speed drift track is exactly what fans and drivers wanted and what Riverside Speedway was designed to deliver. The new track layout included two banked corners with high-speed entries into a technical 360. The Ste-Croix event promised non-stop action all weekend long, as each driver and their cars were pushed to the limit.

The Pro-Am Championship continues to cast new up and coming drifters in Canada. The winner of the Pro-Am competition was local Sainte-Croix driver, Eric Paradis. Coming in a close second place was Jonathan Thiffault followed by Maxime Desnoyers in third. The Pro-Am Championship drivers were able to complete their round in dry conditions on Saturday, however the pros were forced to contend with very wet conditions on a rainy Sunday. The directors of DMCC stayed faithful to their moto "rain or shine," in what many called the rainiest day in the history of Canadian drifting.

The finals placed Waldin against Fred Girard (Kumho Drift Skyline) in the last tandem of the day, who had crashed into a concrete wall at full speed during his qualification in the morning. When the mist cleared and puddles stood still, it was American driver Matt Waldin behind the wheel of the Mishimoto/TunerIcons 350Z who took the big win with Girard in second. With two other podium finishes in 2nd and 3rd place so far this year, Waldin has now secured top spot in overall DMCC series points. Pat Cyr who had won the first two rounds of DMCC did not make it to the podium this round, but is still a close second place right behind Waldin in overall DMCC series points. Third place belonged to Claude Poirier (BFGoodrich Drift) with his first podium finish in the series, winning against Damien Bagley in a tight tandem battle.

Although it ended wet and cold, drivers and fans pushed through the weekend of hot action to enjoy Canada's fastest growing motorsport. For full results and more visit www.DMCCdrift.com.