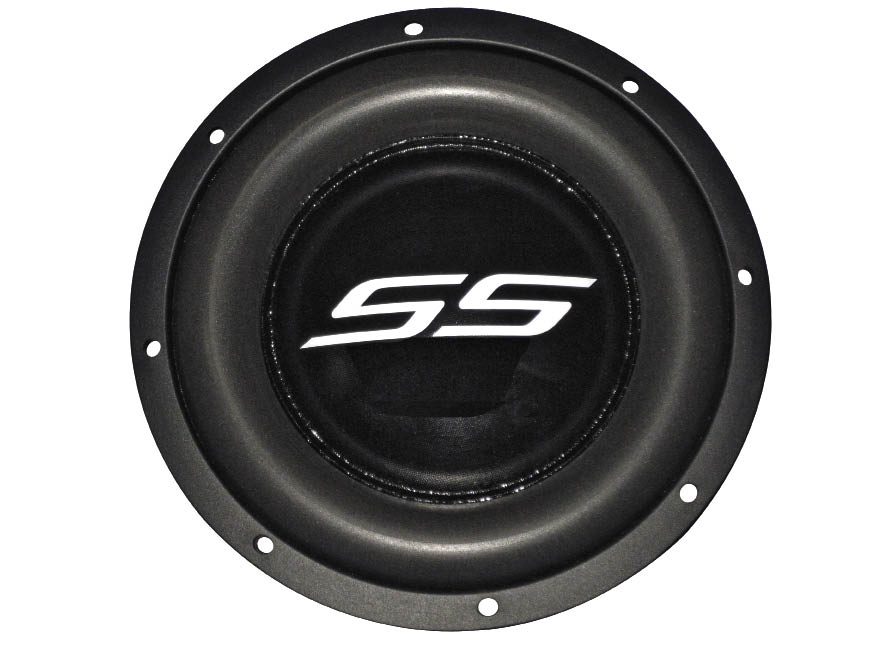 If you are the type of person that takes your bass seriously, the crew at Sonic Soundlabs will understand where you’re coming from. Sonic Soundlabs is a subwoofer company based in Homosassa Springs, Florida and they build some of the most intense subwoofers available anywhere at any price. With six different series of woofers available, you can bet they will have a woofer that’s just right for your level of commitment. The Sonic Soundlabs woofers are hand assembled here in the U.S.A, and are deliberately overbuilt to exceed their customer’s expectations. This time, we thought we’d take a look at what they refer to as one of their entry level woofers, the Subsonic S10.

Right out the gate, you know this isn’t your average 10” woofer. I mean, the thing has a magnet assembly that weighs fifteen pounds! Entry level? Wow.

The first thing you’ll notice is the tall and wide oversized foam surround, which is treated to be resistant to ultraviolet light damage. The fat surround provides plenty of excursion capability, and is mated to a very rigid multi-layer pulp paper cone, and a high dome style dust cap formed of the same material but finished in a “wet-look” coating that gives it a cool high-gloss look. The dust cap is so large on the 10” woofer that it actually meets the cone at the same point as the surround, so all you really see is the dustcap. The business side of the Sonic Soundlabs S10 woofer is constructed around a cast aluminum basket which is finished in black powdercoat. The woofer is rated to handle 500 watts continuously, or 1,500 watt “peak” power levels. With that much power handling, you know that a lot of attention has been paid to heat dissipation and venting the voice coil. In fact, the S10 woofer uses a cooling system Sonic Soundlabs refers to as “Air Force” cooling, where cool air is forced directly onto the voice coil area through six radial vents in the former itself, and vented through eight separate holes in the bottom plate, located on the outside diameter of the voice coil. In this way, pressure buildup under the dustcap is eliminated while maintaining plenty of air flow to keep things cool and under control.

Speaking of the voice coil, the S10 uses a full 3” former to carry the dual 2 or dual 4 ohm coils. The four layer copper windings have a winding length of 45mm, so you know this woofer is going to have excursion capability! To control the excursion and provide linear motion at all frequencies, a low compliance, multi-layer poly-cotton spider assembly is used.

Connections to the woofer are made via two pairs of nickel plated spring-loaded terminals that will easily accept 8 gauge wire. The amplifier power is delivered to the voice coils via ultra heavy duty 12 gauge tinsel leads that are covered in a silicone dielectric jacket. Overall, the woofer is built like the proverbial brick outhouse, and looks far more expensive than its $249 (US) price tag would have you believe. 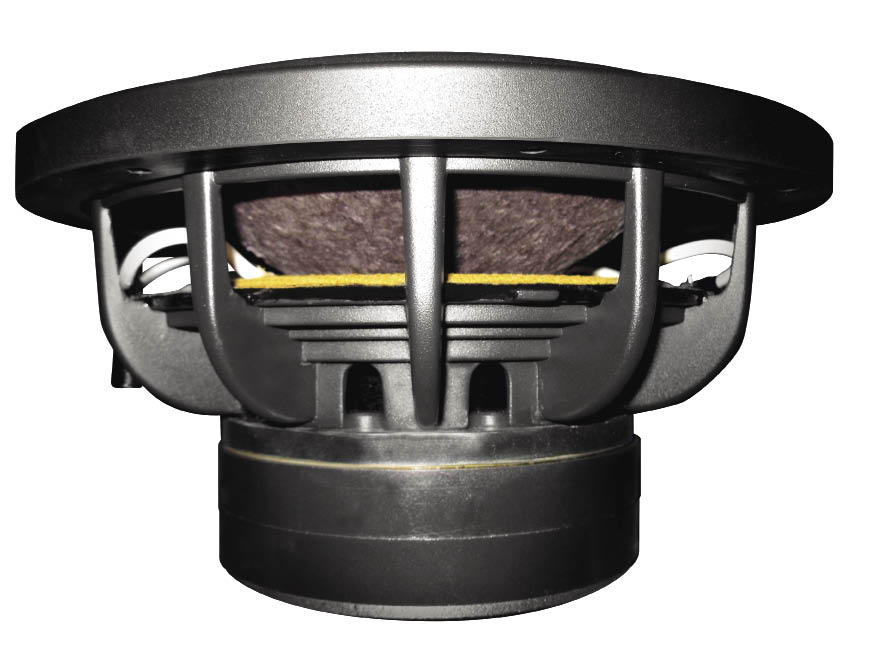 Reading through the supplied literature, I learned that for the S10, Sonic Soundlabs recommends either a sealed or vented enclosure. So after the usual period of break-in, I mounted the S10 woofer in a 1 cu ft. sealed box and got ready to do some listening.

In the sealed enclosure, well-recorded rock sounded great with a tight, articulate voice. Dire Straits “Heavy Fuel” and Marc Cohen’s “Walking in Memphis” had nice definition and tone, and virtually zero overhang on transients. Plucked bass was well defined and sounded nice and round, as it should. More bass heavy tracks like the 50 Cent’s “In Da Club” and Pussycat Dolls “Don’t Cha” were reproduced with authority, and the S10 woofer showed no signs of stress or bottoming even though my instrumentation showed it had received brief signals in excess of 700 watts. I did note that the very bottom of the audible register was a bit subdued in the sealed enclosure.

Since the woofer is claimed to work in either sealed or vented boxes, I needed to find out which type I’d prefer if I were to install this woofer in my own system. Switching it over to a 1.25 cu ft. vented enclosure tuned to about 38Hz, it played louder overall (as expected) at the same power levels, but without giving up too much of the quick and tight sounding transient response. The bass remained well controlled and tight sounding, but now had significantly more output. Without being able to switch back and forth instantly it was hard to judge whether or not the vented installation gave up some definition and attack to the sealed system, but if it did, it wasn’t much. Regardless of the type of music I played, or the levels I played it at, the Sonic Soundlabs S10 handled it all and was always ready for more. I deliberately pushed the woofer hard, measuring brief periods of over 750 watts being applied, and the folks in the neighboring business will attest that the woofer had no lack of output!

After trying the woofer in both types of enclosures, I found that my personal preference leaned strongly toward the vented application, as the output was much greater, and I could certainly give up a tiny bit of control for what sounded like twice the volume. 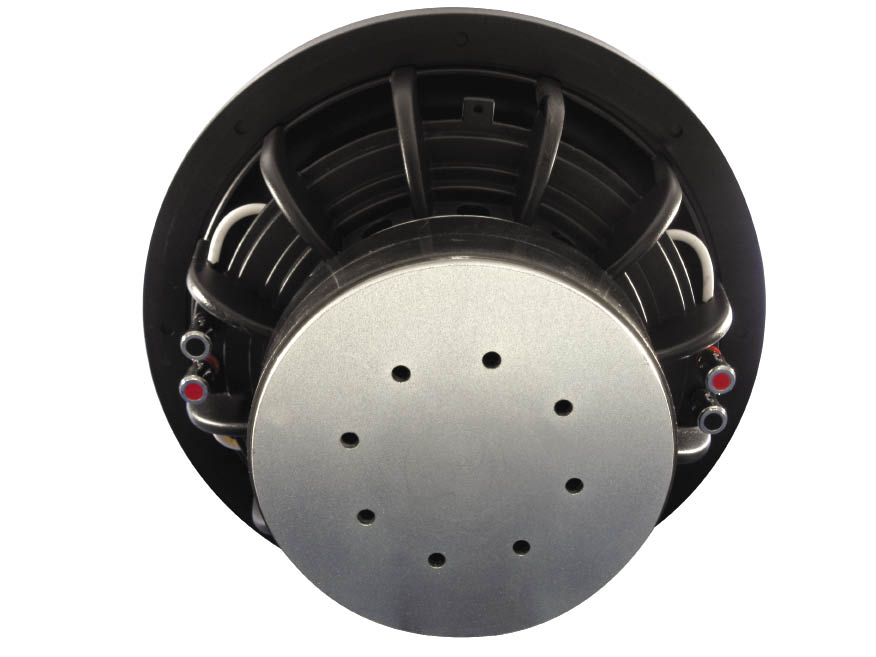 After letting the woofer cool and settle overnight, the following morning I began the technical measurements. Beginning with measuring the actual Thiele-Small parameters of the woofer, I then took some 1 watt nearfield curves in both the vented and sealed enclosures to give you an idea of the actual output differences caused by venting the box. As you can see in the accompanying graph, the vented box develops significantly more output throughout the usual bandwidth of frequencies for a subwoofer system, with a lot more output from 30 to 70Hz, which is exactly the way I’d thought it sounded. You gotta love it when the listening experience correlates with the data!

The entry level Sonic Soundlabs S10 woofer is a high performance, ruggedly built woofer that many companies would be happy to have as a premium product. It not only handles a ton of power, but it also sounds good enough to satisfy even the most discerning user. Built to handle gobs of power all day long with great performance in very common enclosure volumes, it should be easy to install in virtually any vehicle. And if this is Sonic’s entry level, you just know that the rest of their offerings are going to be off the hook. For more information on all the other Sonic Soundlabs woofers, visit them online at www.sonicsoundlabs.com or at a dealer near you.

Cassar Performance and Design's Modern Tribute To 1968 California Special Mustang
Kevin Cassar of Cassar Performance gave us a breakdown of their awesome Project Freedom Mustang in the Royal Purple booth at SEMA 2022 - a modern...