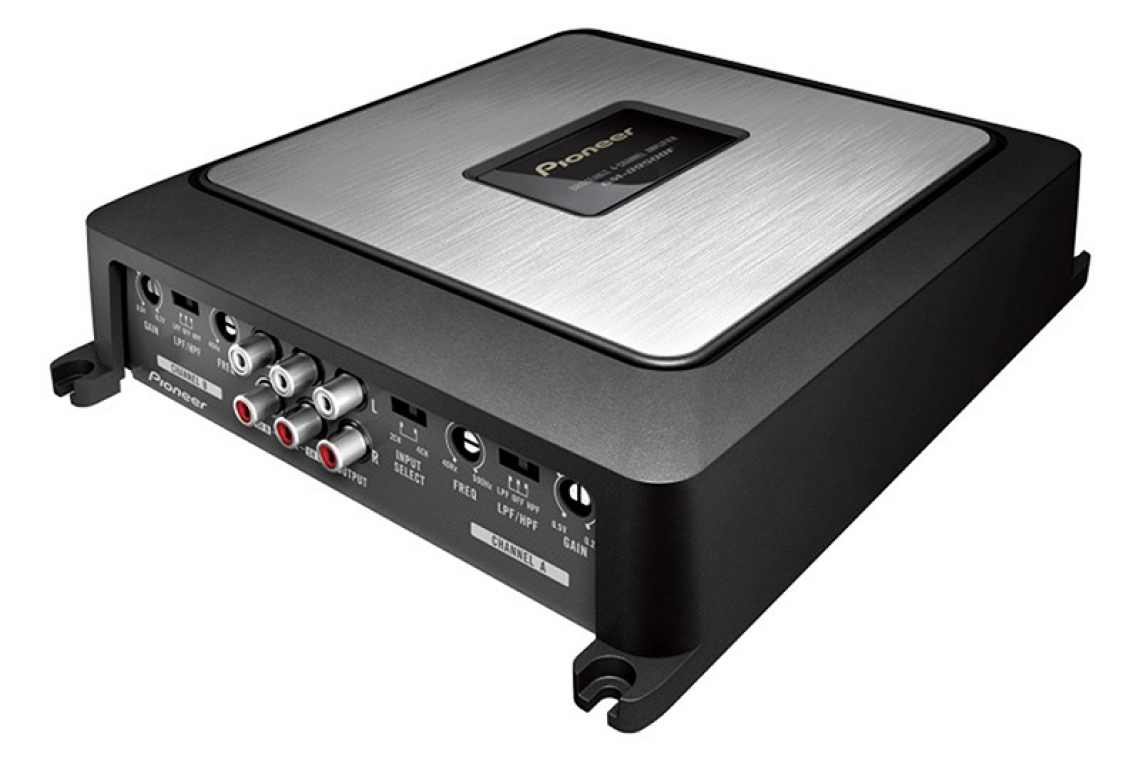 Have you noticed lately that a lot more audio manufacturers have been talking about efficiency? In a car stereo amplifier, we measure efficiency by comparing the amount of power consumed (in watts) from the battery, versus the amount of power (also in watts) delivered to the loudspeakers. The difference between the two numbers is the amount of power wasted in the generation of heat. Traditional Class AB amplifiers are notorious power wasters, particularly at fractional power levels, where we do the majority of our listening (ie: When a 200 watt amp is operating at 20 watts of output).  At these levels, most Class AB amplifiers are less than 20% efficient, which means more than 80% of the current consumed is simply wasted as heat. Lots of heat generation requires large heatsinks, which translate to bigger amplifier sizes, and higher prices.

With the advent of high performance silicon integrated circuits and very fast transistors, it has become possible to build much more efficient Class D amplifiers that have full range audio capability. These designs benefit from dramatically improved power efficiency at all output levels, and as a result produce less heat and hence, can be made a lot smaller in physical size than a conventional amp that needs a comparatively larger heatsink. This review will take a closer look at Pioneer’s latest model of efficiency, the full range Class-D GM-D9500F.

The GM-D9500F is a four channel full range amplifier, rated at 75 watts per channel into 4 ohms, or 100 watts per channel into 2 ohms. It can also be bridged to create a pair of 200 watt channels, in either mono or stereo bridged configurations. Measuring only 10.7” x 7.9” x 2.2”, the amp looks way too tiny to be capable of producing 400 watts of power.  And if not for its highly efficient Class-D topology, it probably would be. But with average operating efficiencies of better than 60%, not much of your power is wasted as heat with this one. The heatsink is smooth cast aluminum, and is finished in a semi-gloss black powder coat with a silver, brushed aluminum top plate. The result is a small, but classy looking piece of gear.

The GM-D9500F uses barrier-strip type terminals for all wire connections, and while pretty basic, the terminals are plenty beefy, enough to handle the required wire gauges. These terminals are found all along one end of the amp, and all the signal input and controls are located on the opposite end. Here you’ll find the front and rear RCA inputs, and a set of pass through RCA outputs. Controls are quite basic with a single gain pot for each pair of channels, and high pass, low pass and full range crossover switches. Crossover frequencies are variable from 40-500Hz, and use -12dB per octave slopes. A handy 2-Ch/4-Ch input signal switch allows you to drive all four channels with only a single pair of inputs if you prefer, and a pair of pigtail RCA’s are provided for high level input connections. Inside the amplifier a nicely manufactured PCB contains a mixture of through-hole and surface mount parts, and each one of the amplifier’s MOSFETs is secured to the heatsink with its own screw. No big multiple device clamps secured with only two or three screws found here! One 40A chassis mounted fuse provides over current protection. 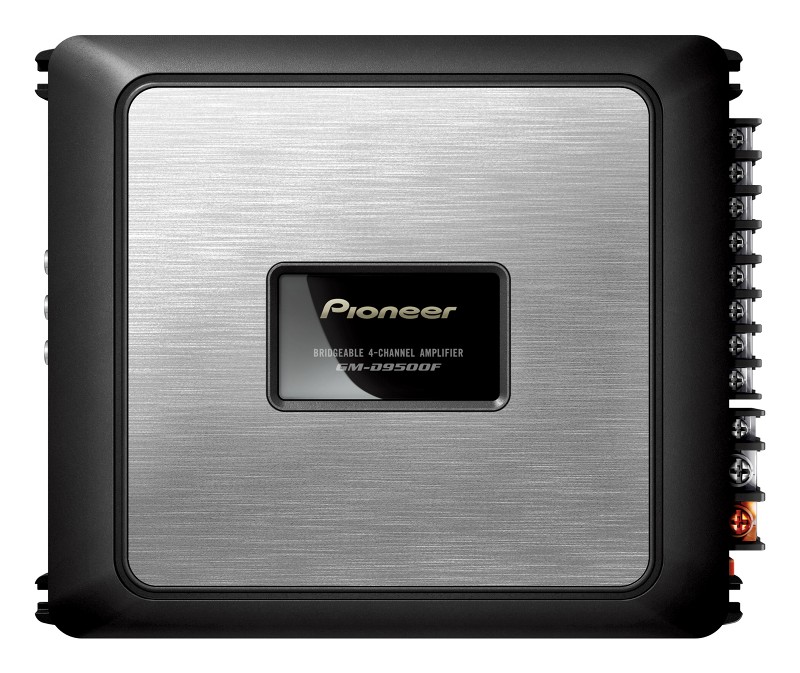 When it came time to sit down and listen to the new Pioneer amp, I connected it so the front channels drove my reference speakers and the rear channels were bridged to a 4 ohm subwoofer system. The front channel crossover was set to 40Hz high pass, and the sub was crossed over at 80Hz. I adjusted the gains and settled in for some listening, and a few hours later, I came away rather impressed by the diminutive little four channel amp. It proved it could drive a system with authority, and the quality of the sound was quite good as well. Without signal applied the amplifier was very quiet and had a zero audible noise floor. Stereo separation was also excellent and the GM-D9500F did a very good job of creating a solid stereo image with a strong “phantom center”, but occasionally seemed to lack a bit of the sense of “space” and movement that I have observed in some recordings. I noticed this most when listening to large complex orchestral performances or when playing pure acoustic recordings done in a large open space. To be fair however, I do my evaluation listening in a very quiet, acoustically treated room and I sit in the sweet spot between a pair of very good sounding loudspeakers. So what I’m talking about “missing” is the kind of detail that’s seldom even possible to hear in a typical car audio system.  When I cranked up the gain on the woofer and pushed the amp really hard for about 15 minutes, I noticed that the heatsink did get fairly warm to the touch, but the amp showed no audible sign of stress. 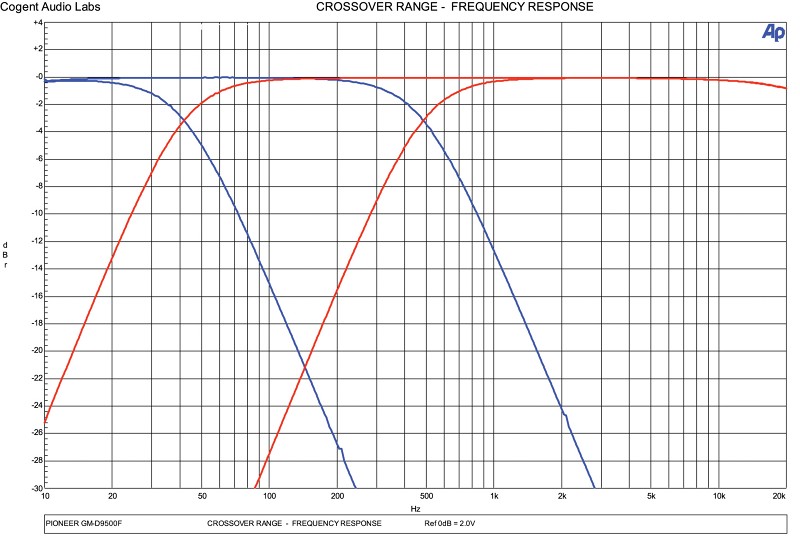 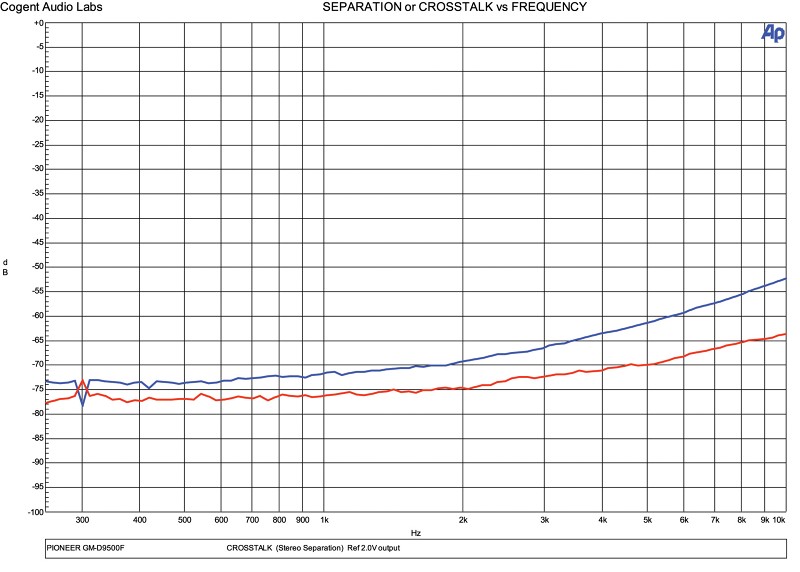 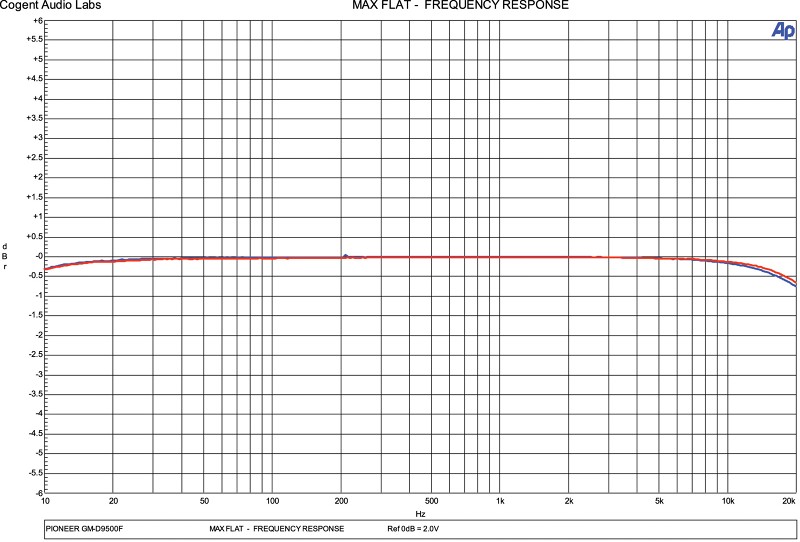 Moving the GM-D9500F to the test bench, I ran the usual battery of tests and did my best to break things but everything turned out very good. The amplifier actually produces quite a bit more than its rated power, and it will even produce the rated power at a battery voltage of 12.6 volts. I haven’t seen an amplifier with this much “headroom” in the power spec for a long time, and it was very refreshing. Well done Pioneer! Signal-to-noise measured well and so did crosstalk which verified my listening impressions. Output impedance of 0.036 Ohms was about average for a full range Class D design but interchannel phase coherency was excellent. The crossovers worked exactly

as intended and the amplifier was exceptionally efficient at any power level. I did perform a fairly brutal full power thermal test and the results were okay but not as good as I had hoped. Remember, this is a very small amp and it makes a lot of power! Based on this evidence, if you are often going to run the GM-D9500F really hard, make sure it’s mounted in a spot with plenty of airflow, which is simply a good installation practice anyway.

Priced around the $269 mark in the U.S., you’d have to look long and hard to find another four channel amp with this much power, in this small of a package. And when it sounds great to boot, I’d say Pioneer just made life a little tougher for their competition. For more information, visit www.pioneerelectronics.com.