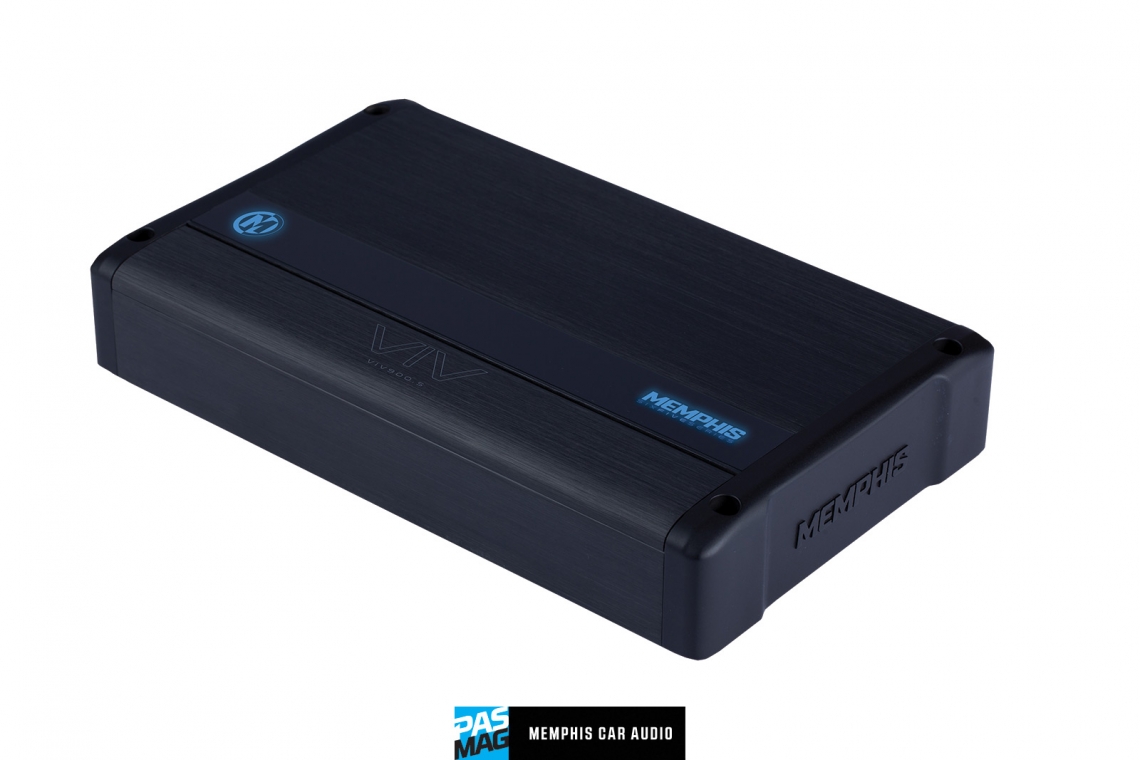 Brand-new from the folks at Memphis Car Audio comes a line of DSP-powered amplifiers, with all-new looks and leading edge technology.

The new series is known as the Six Five Series, and is Memphis’ first real foray into the DSP world. There are seven different models in the series with one-, two-, four- and five-channel variations.

All of the amplifiers have a cool new cosmetic treatment and have the controls hidden behind a magnetically-latched cover panel. For the purposes of this review, they sent us a pre-production prototype of the five-channel version, called the VIV (Six Five, get it?) 900.5. 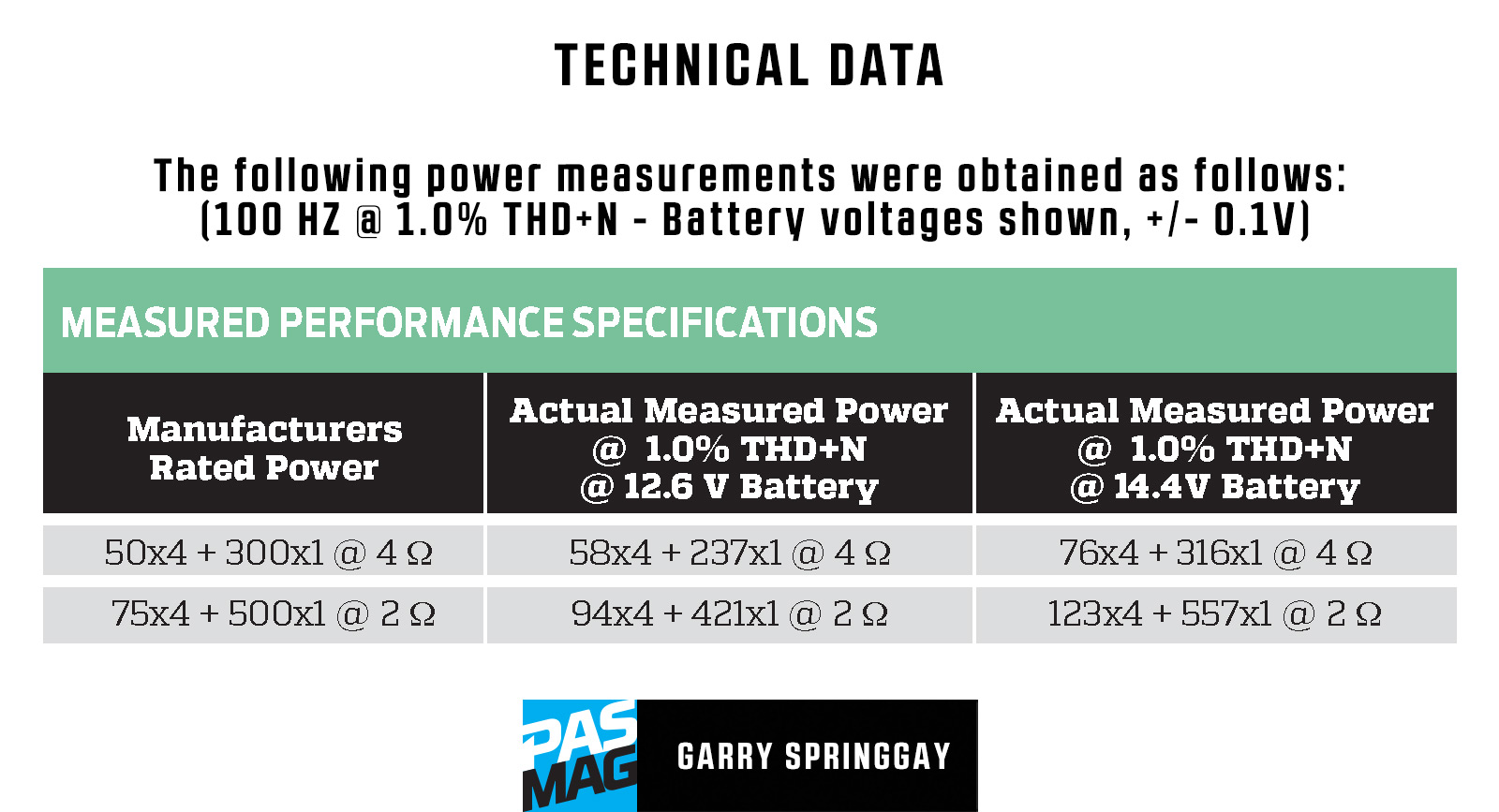 Features
The new look from Memphis also comes with a few unusual features, such as the ability to select from one of seven possible illumination colors for the power-on indication. The control for the LED color is found along with all of the rest of the controls, under the hinged front cover of the amplifier, just above the connections. In addition to the variable LED color, the amp is equipped with 24-dB-per-octave crossovers, which provide bandpass configurations in addition to the typical high- and low-pass filters.

The VIV900.5 is rated at 50x4+300x1 into four ohms, or 75x4+500x1 at two ohms. Should the need arise, the sub channel can also drive a one-ohm load. Also, in the interest of maximizing system design flexibility and installation friendliness, the VIV900.5 has three different ways to turn it on, with sensing for DC offset as found on most head units, signal sensing with musical input, and the conventional 12-volt trigger. To make signal routing simpler for installers, there is also a switch that allows you to drive the amplifier with just a single pair of inputs, or four inputs to allow fading with constant bass output.

The heatsink is sized appropriately for this powerful an amplifier, and because of that and the high efficiency Class-D topology, the amplifier has excellent thermal performance, which is a sore spot for a lot of multi-channel car amps. The power and speaker connections will take generously sized cables (four- and 10-gauge, respectively) and the terminals are well-insulated and protected. 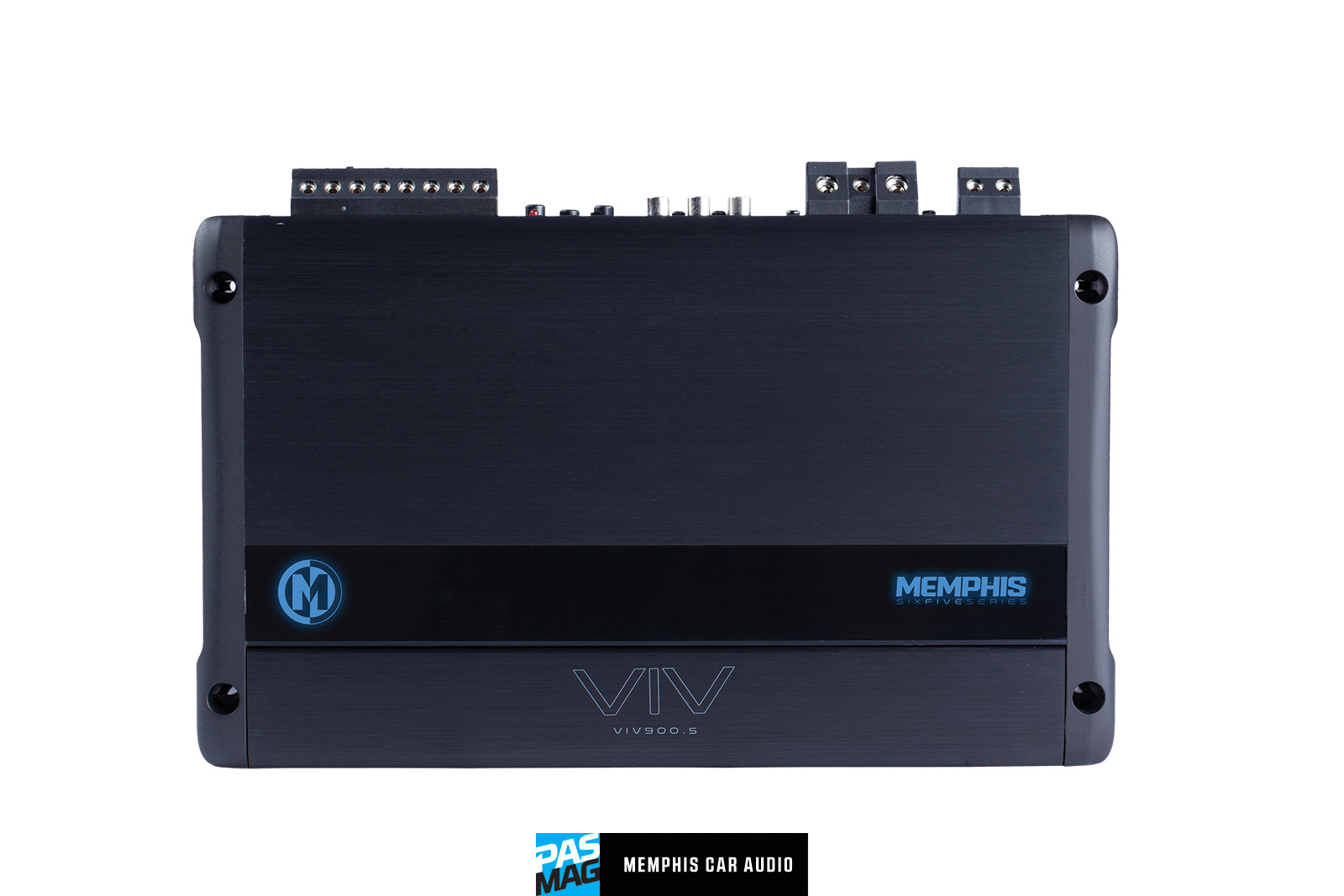 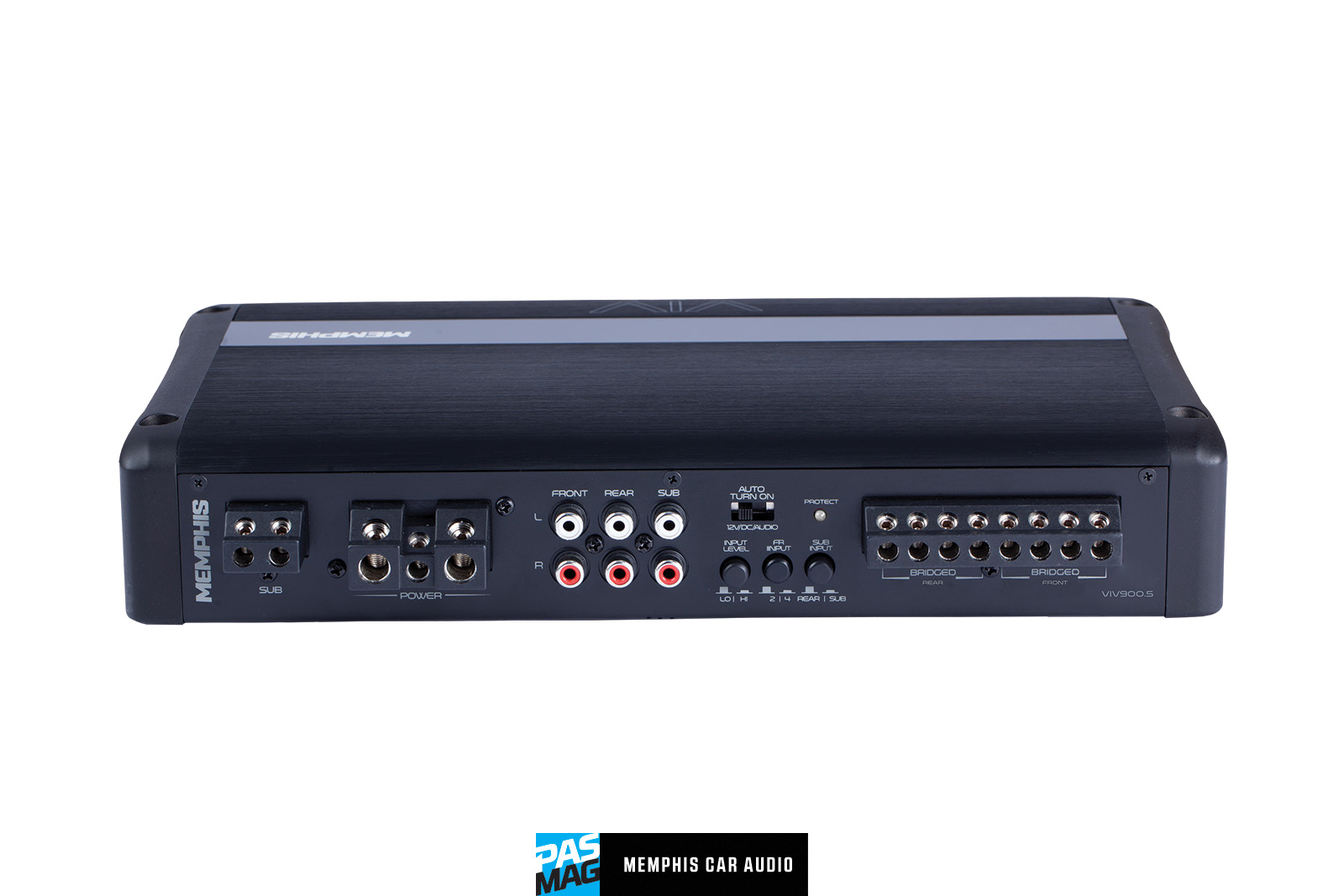 When it comes to tuning the system, to complement the accurate DSP-controlled crossover filters, there is also a variable bass boost controller that can provide up to 18-dB of bass boost at 45 Hz. This filter is also designed to have a high Q factor, which means its bandwidth is narrow so as to not have a detrimental effect on adjacent frequencies. This makes it more effective as a tuning tool, and results in a deeper, tighter bottom end. 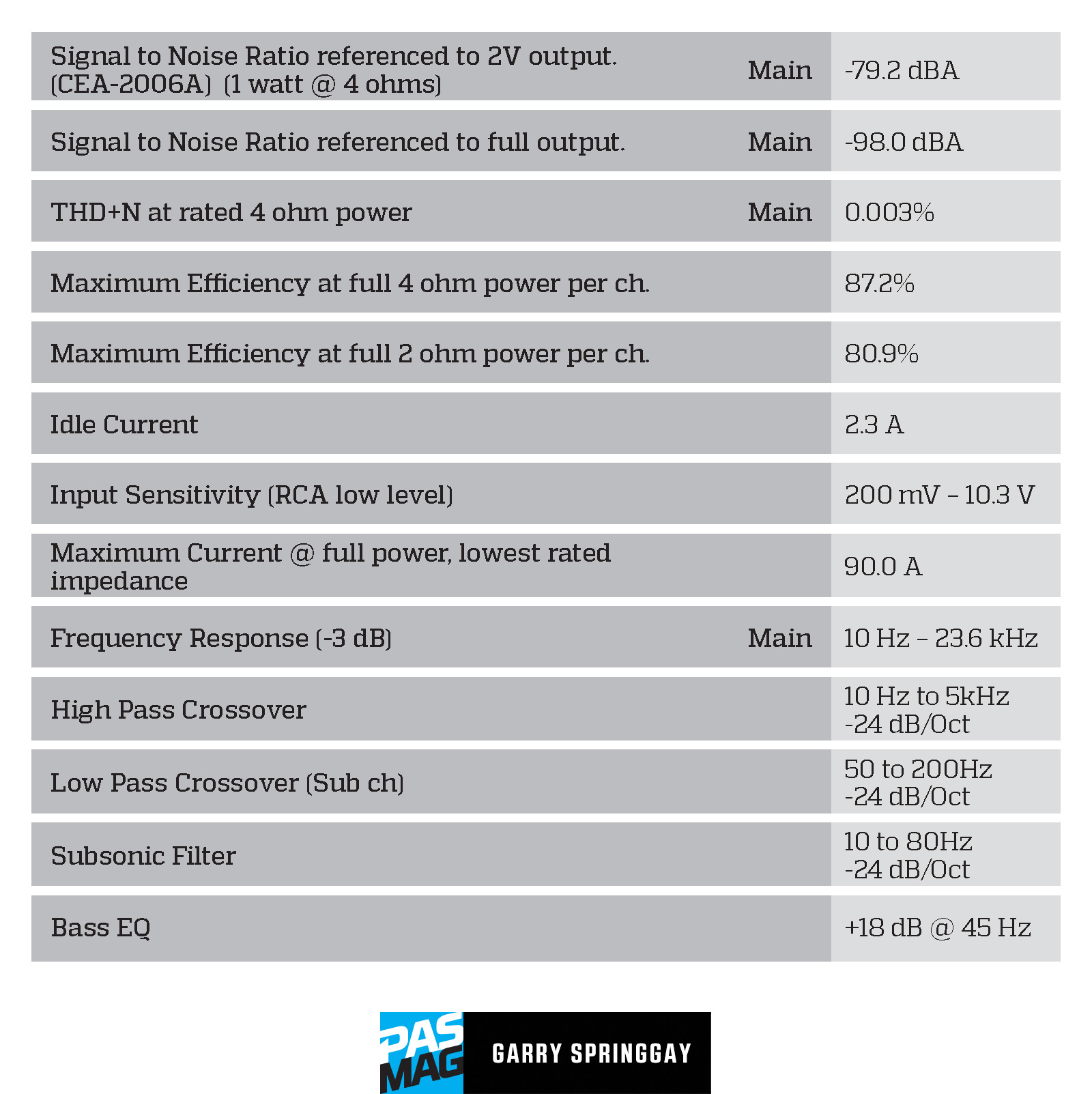 Listening
I connected the amp in my sound room’s reference system, using a two-ohm 12 in a sealed enclosure as my woofer system, and then two pairs of four-ohm component speakers were connected for the full-range sound. After setting the subwoofer crossover to 80 Hz and leaving the full-range channels in all-pass mode, I was ready for some listening. As soon as I began to audition the VIV900.5, I knew I was in for some fun.

From a sonic perspective, the amp is very musical and virtually transparent. Stereo imaging is excellent, and there is no audible noise of any kind. From one end of the audible spectrum to the other, it simply made things louder, which is exactly what a good amp should do. With my wide ranging (some say ridiculous) musical tastes, I could go from 50 Cent, to Bach, to ZZ Top without any issues or adjustments. Low-bass is produced with authority and exhibits very good definition, while the amp still maintains smooth and detailed high frequencies, with no harshness or edginess. Female vocals are smooth and harmonies well-defined, with no muddiness or smearing of the soundstage evident.

The amp proved to have plenty of power on tap, even for enthusiastic listening levels. During several hours of focused listening, the Memphis amplifier sounds very natural and uncolored, regardless of the musical selection, handling dynamics and my reference woofer and full-range speakers with ease, while barely getting warm to the touch. This amplifier is exceptionally efficient, and not just at high power levels. I noticed the current draw was quite low, even when playing music at fairly loud levels. When it was all said and done, the VIV900.5 proved to be a very natural-sounding and powerful amplifier. 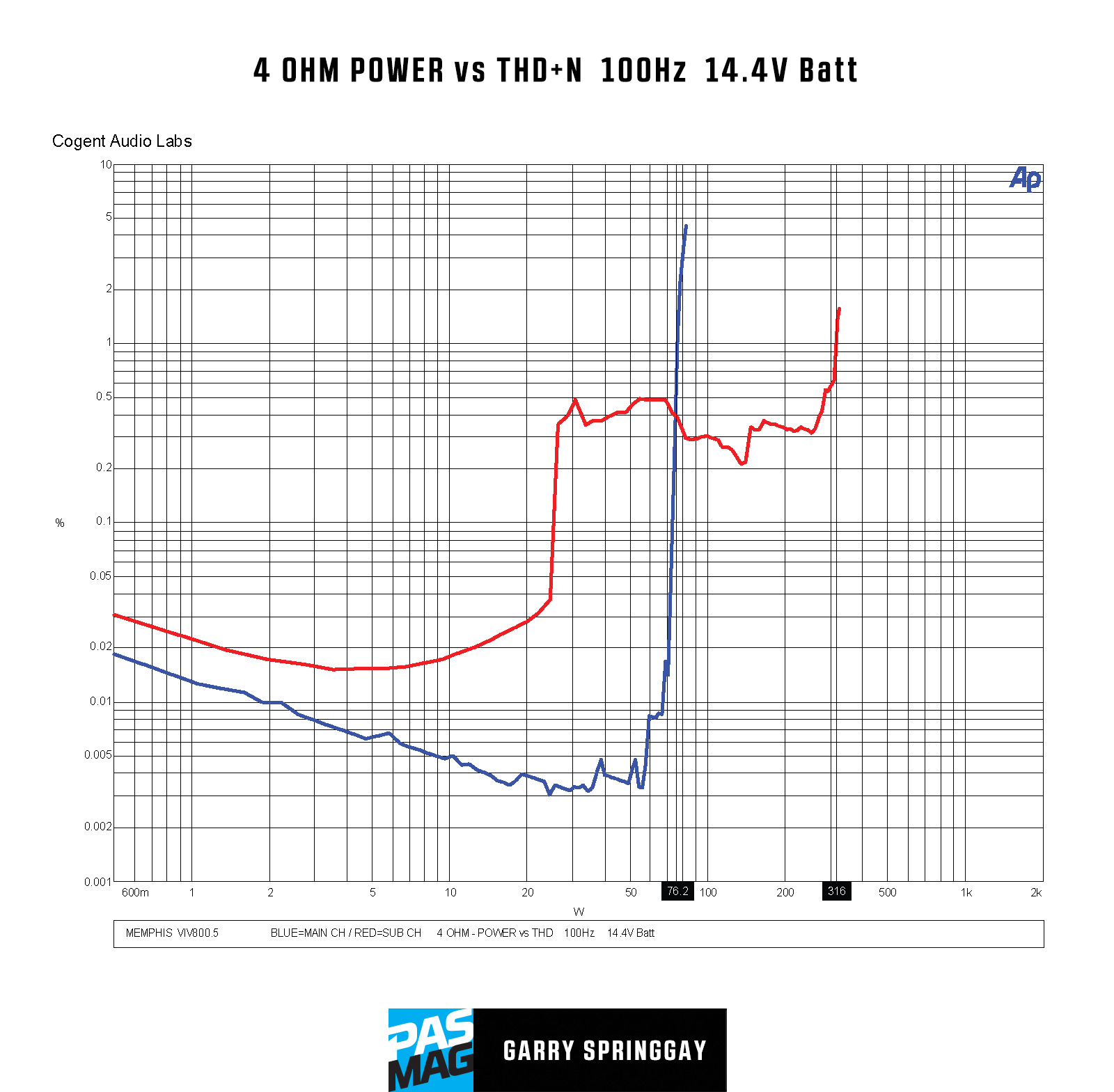 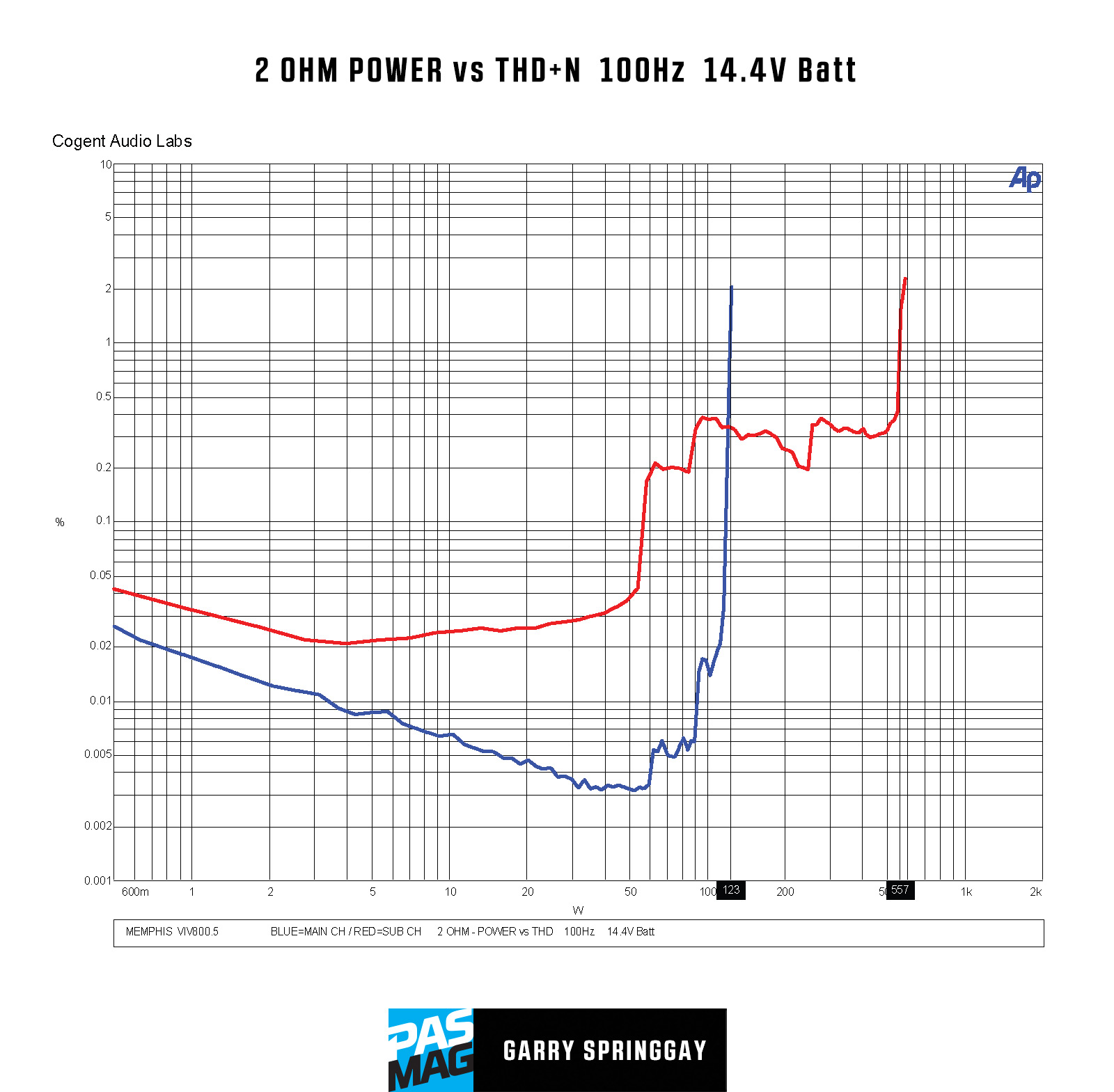 On The Bench
Back on the test bench, the measurements correlated with what I had heard. The amplifier’s signal-to-noise performance is good, THD+N is very low, and the frequency response across the audio band is ruler flat, with less than 0.5 dB of deviation from perfect from 20 Hz to 20 kHz. Multi-channel amplifiers aren’t always the most efficient models, but this amp proved to be just as good as many single- or two-channel models. Overall power efficiency at four ohms is better than 87 percent, which means only 13 percent of the power consumed was lost to heating. At one-third power, where we do most of our listening, and many amplifiers struggle to hit 50 percent, the VIV900.5 came in at 80.7 percent! 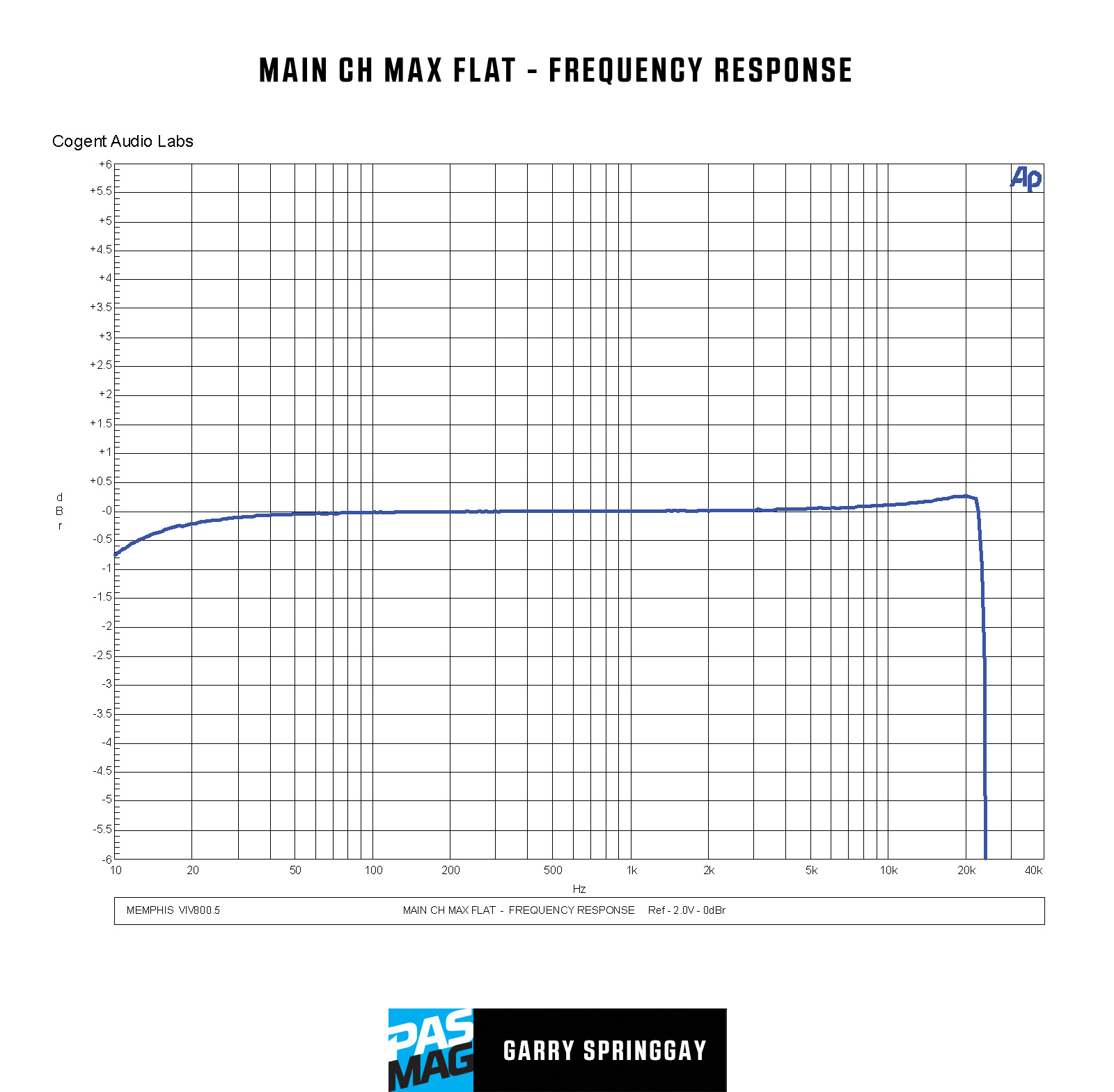 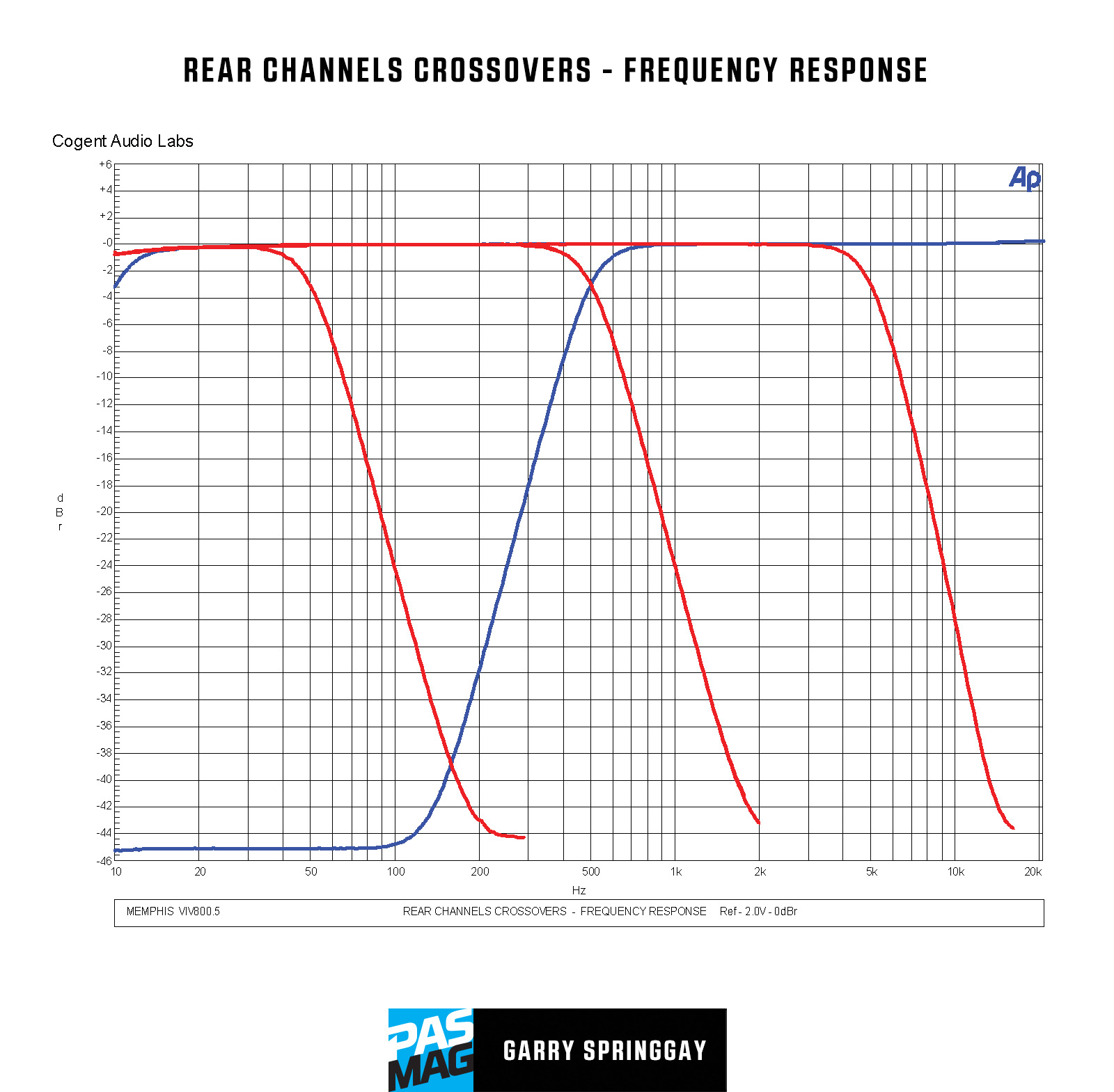 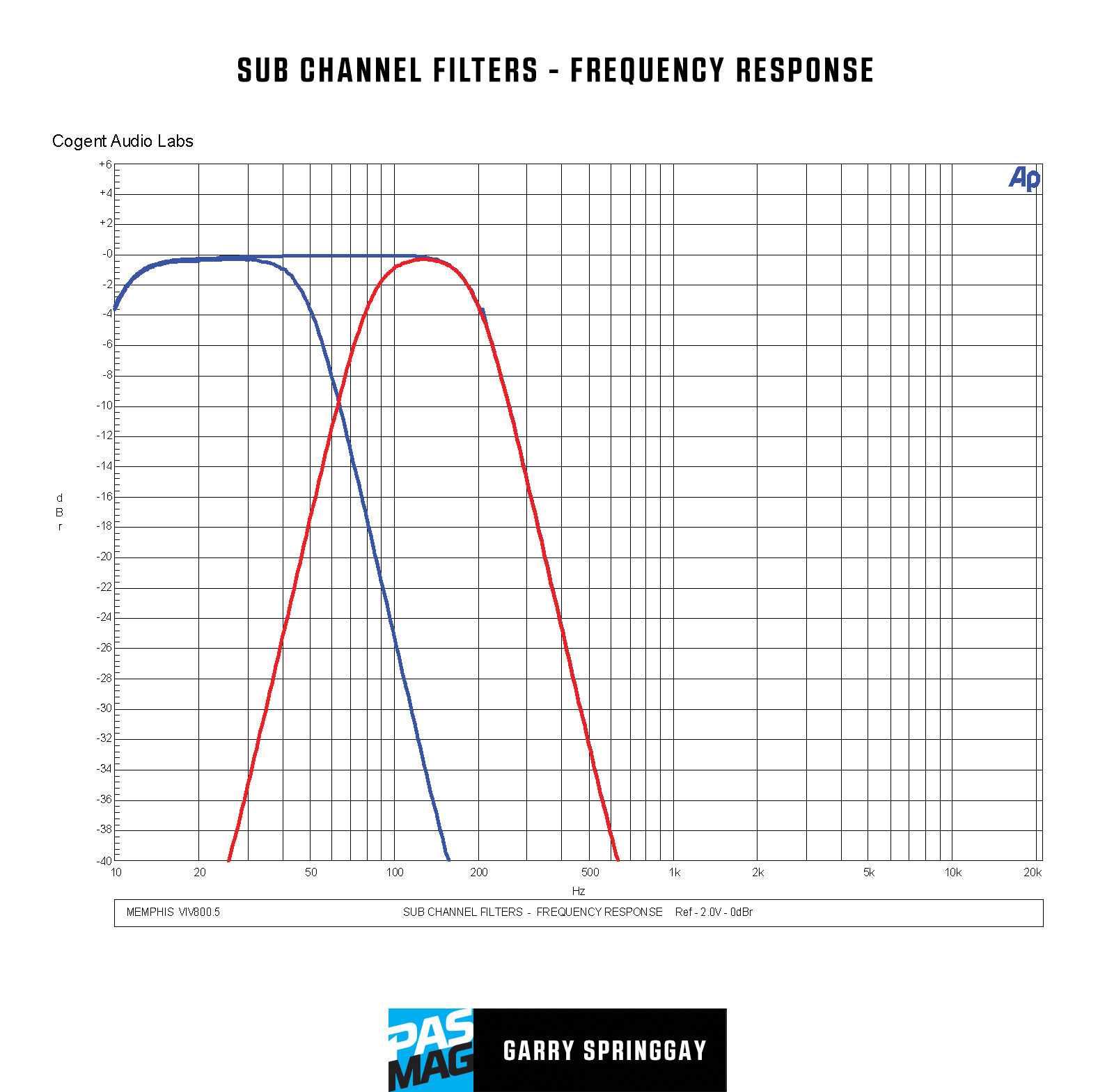 Conclusion
I am a fan of this amplifier. It’s well-made, sounds good, has a lot of adjustability, and can easily be interfaced into almost any type of installation. If you’re in the market for a high-performance multi-channel amplifier that can drive your whole system with only one chassis, the Memphis VIV900.5 should be high on your list of amps to audition. 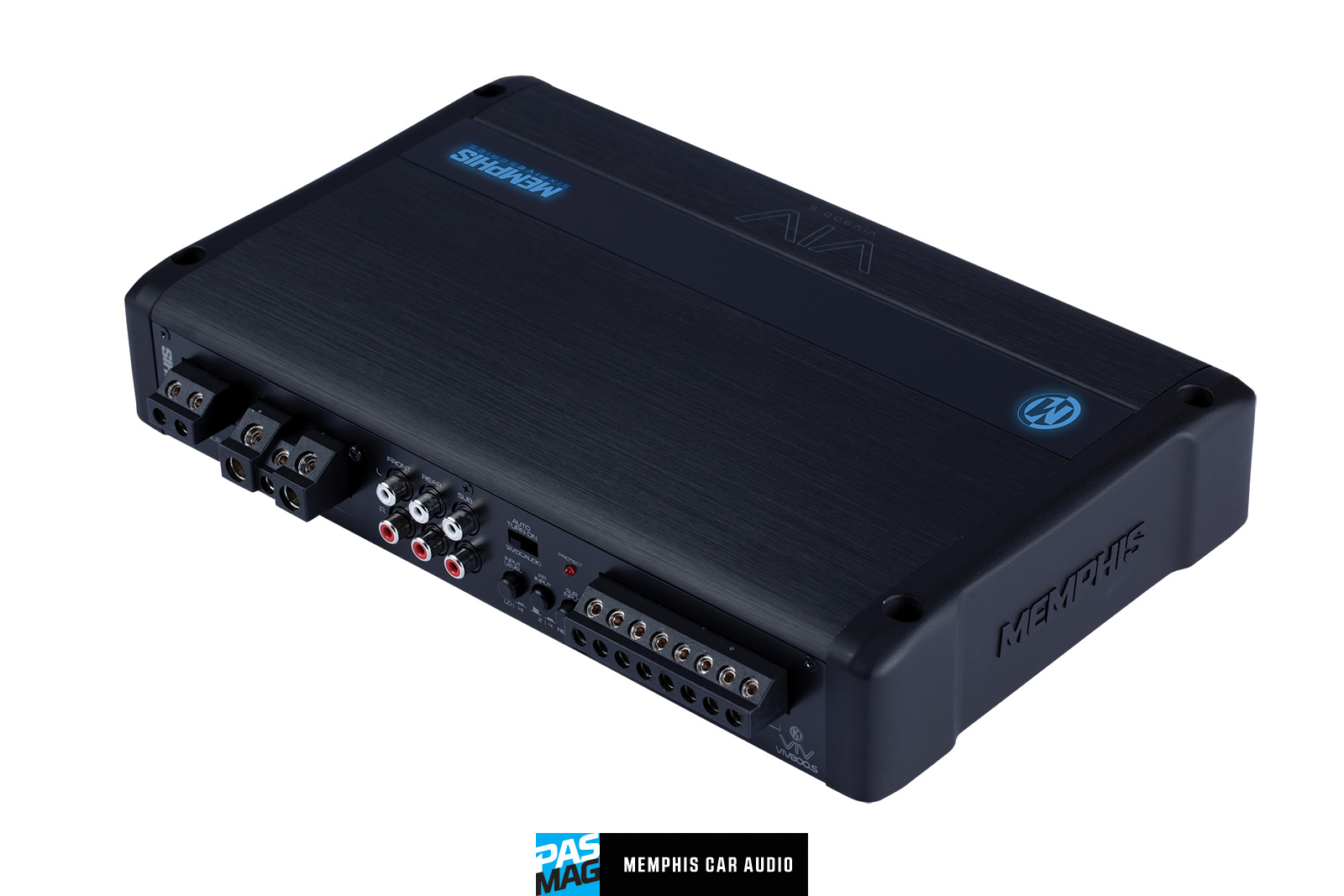