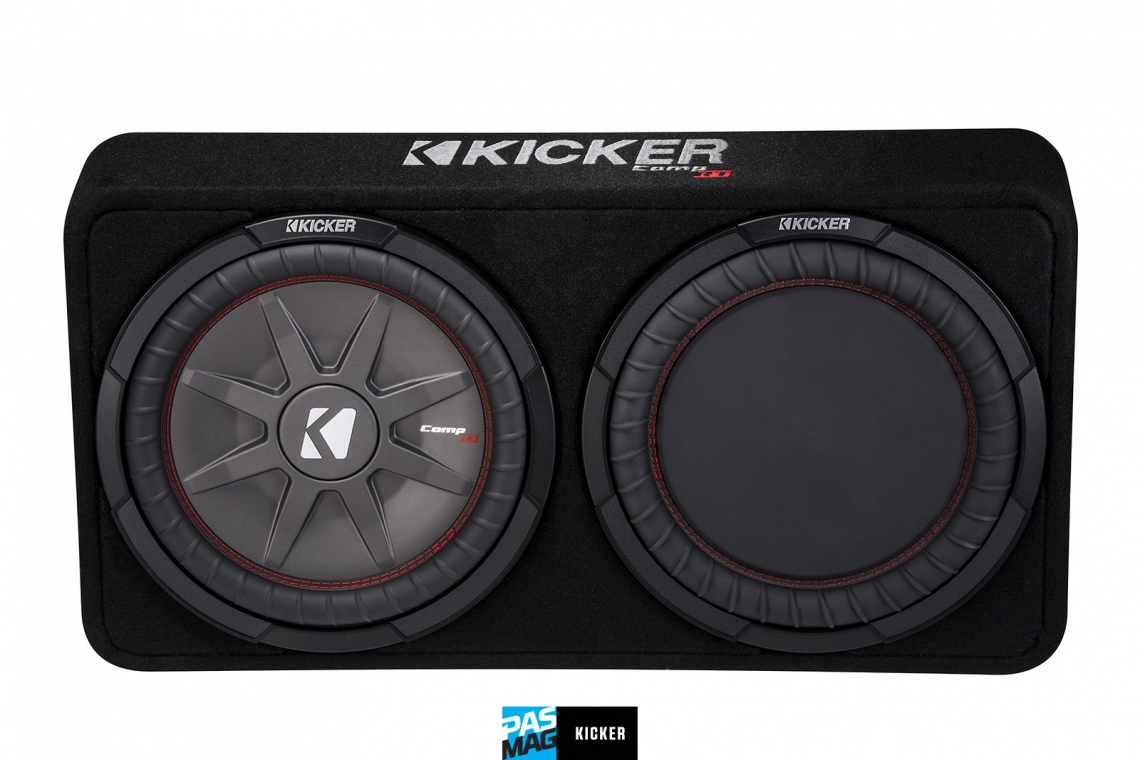 From their world headquarters in Stillwater, Oklahoma, the Kicker brand of car audio continues to turn out revolutionary problem solving new products.

If you have ever wanted to install a ground pounding subwoofer system in your vehicle, but couldn’t overcome space constraints, this one’s for you. By utilizing their “Reflex Subwoofer” technology and advanced enclosure construction, Kicker has solved the space constraint problem for a lot of people.

The new CompRT Loaded enclosures are some of the thinnest, fully-finished enclosures available. Thanks to the implementation of a passive radiator with the Reflex Subwoofer technology, these incredibly space saving systems can provide all the bass you’ve been waiting for. The CompRT Loaded enclosures are available in three sizes, eight, 10, and 12 inches, and each size can be had in either two- or four-ohm configurations. For our review, they graciously sent a 12-inch, two-ohm version, known as the TCWRT122. This system has a retail price of $349.95 in the U.S. and is designed to handle a 500-watt amplifier. 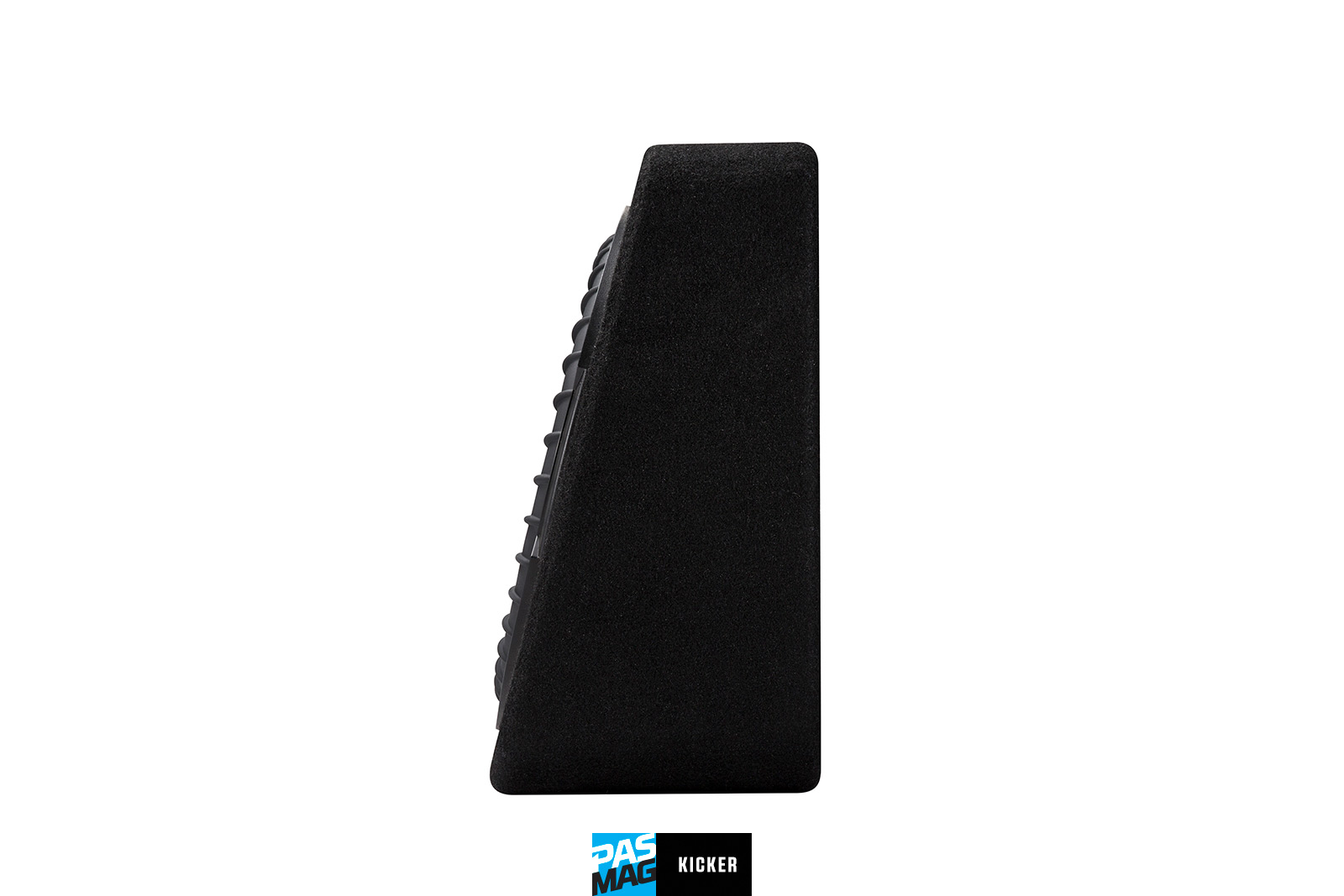 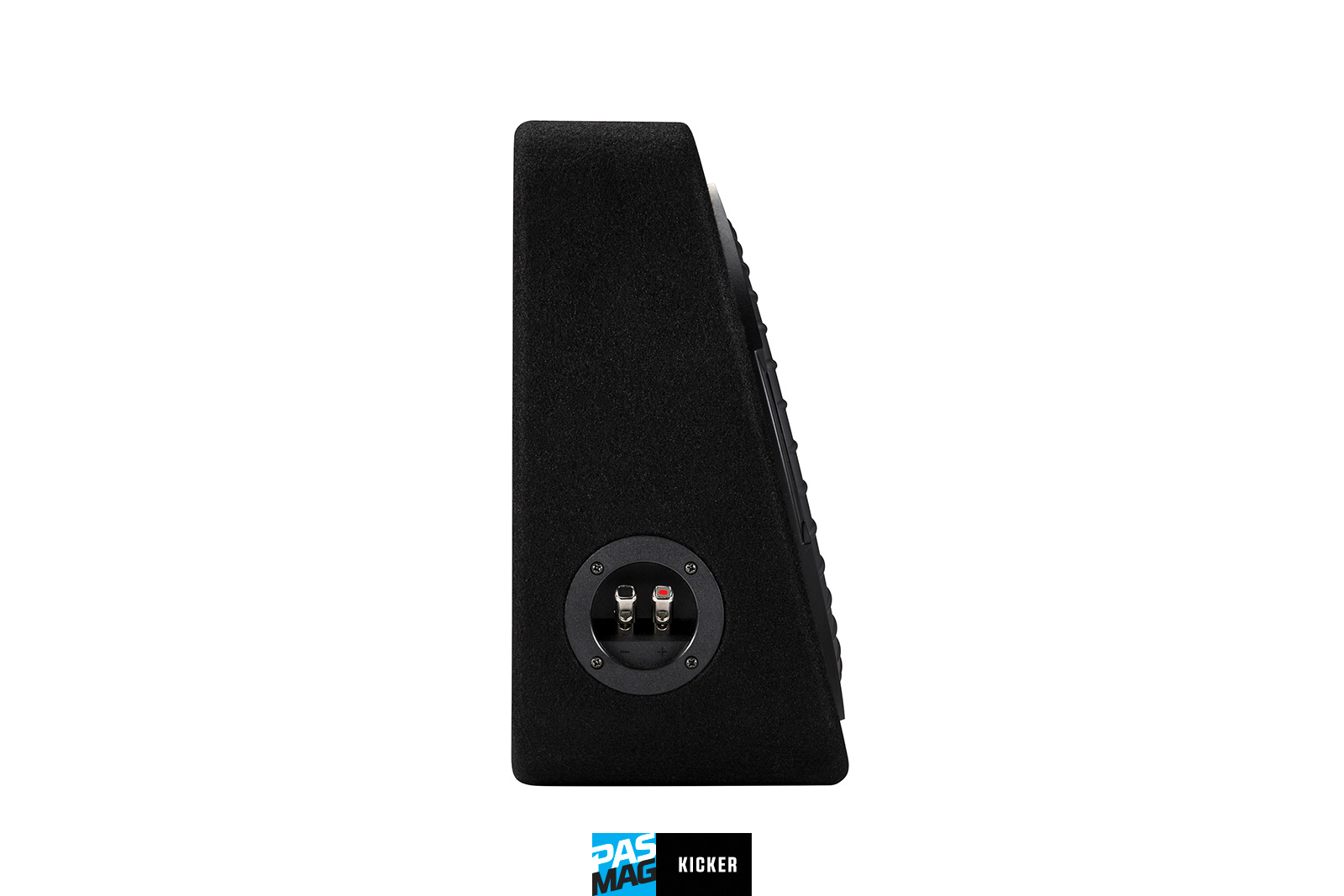 Features
The shallow depth system is based around one of Kicker’s CompRT shallow-mount woofers, coupled with a specially designed passive radiator. Both elements use Kicker’s ribbed Santoprene surrounds and reinforced polypropylene flat cones. The enclosure is manufactured from medium density fiberboard (MDF) and uses rugged internal bracing to keep it rigid and resonance free. 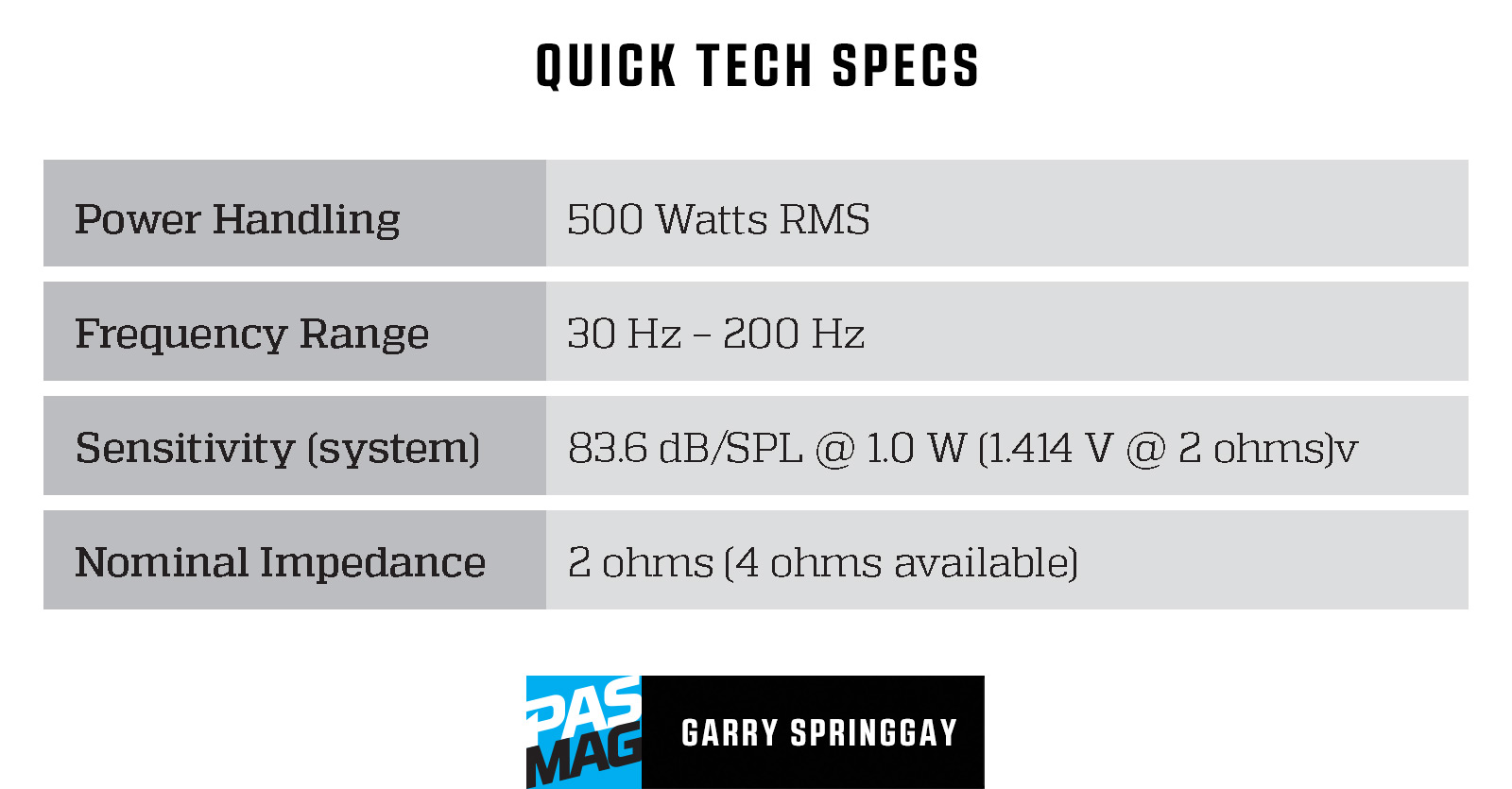 So, why a passive radiator instead of a typical port? A passive radiator system works very similar to a typical ported enclosure, but has a few significant differences. To be sure, designing a properly tuned passive radiator is more complex and expensive than standard ports, however, many ported systems with typical sub enclosure low frequency tuning lack the ability to displace the large volumes of air necessary when the woofer is operating near full excursion. This is because the port volume is almost always too small for the amount of air to be moved at high power levels. By the time you get the port volume large enough to displace the required air volume, the ports are too long to fit in the vehicle! This is where the passive radiator comes in. Although it may not be readily apparent, passive radiators work on the same principle as a port. The air inside a sealed box is compressible, but then it “springs” back. This pushing back effect is called “compliance,” and mechanically it’s much like a spring. Any spring will have a resonance frequency. If you hang a weight on the end of the spring, it will oscillate slower, or at a lower frequency. Increase the weight, and you lower the frequency further. The same thing goes for a passive radiator. The tuning is accomplished by carefully adjusting the compliance and the moving mass. Only now, you don’t have to worry about losing output to inadequate port sizes because the passive radiators can have massive excursion capability.

Listening
I connected the CompRT Loaded enclosure to my reference system and set my amplifier’s second order low-pass crossover at 100 Hz. The Kicker woofer system immediately surprised me with the amount of output produced. I began with a really cool bass track that isn’t very well known. The song is BTO’s Not Fragile. Produced in the early ‘70s, this was one of the first recordings I have ever heard that had really well-recorded low bass on it. In the beginning of this track, bassist Fred Turner lays down a deep groove that’s continued throughout most of the song. Between Fred’s bass and Rob Bachman’s kick drum and floor tom work, the track is pretty telling of a woofer’s ability to reproduce rapid changes in deep bass notes. The slim Kicker system proved easily up to the task, with very good attack and decay, and a natural-sounding timbre. A truly musical woofer needs to be articulate and have the ability to not just boom, but also to reproduce all the intricate details that can be found in the bass portion of music. In this area, the shallow system really rose to the occasion. Using a bunch of different tracks, like Rickie Lee Jones’ Danny’s All Star Joint, or Imelda May’s Johnny Got a Boom Boom with expertly played plucked stand-up bass, the sonics of the system were impressive.

On The Bench
After the system had cooled down, I moved it back to the test bench for a couple of basic measurements. With the frequency response of the system measured and the impedance curve recorded, my measurements reinforced what I had heard the day before. The shallow-mount woofer system has good output from about 40 Hz to over 150 Hz. When you factor in the typical transfer function of a car, there will be great output all the way down to the lowest registers. The impedance curve looked exactly as you’d expect with two pronounced impedance peaks on each side of the passive radiators resonant frequency (see the provided graphs). 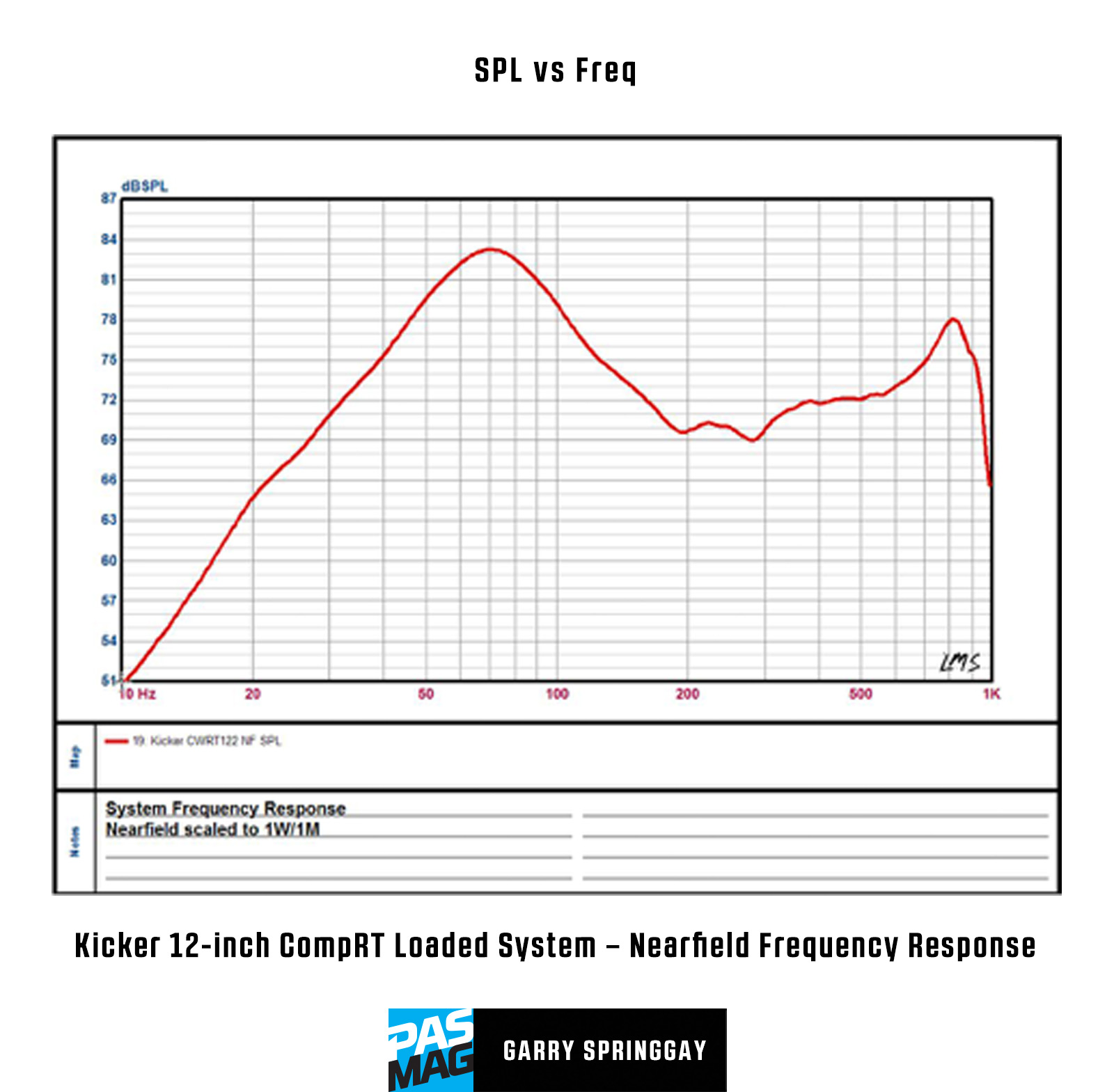 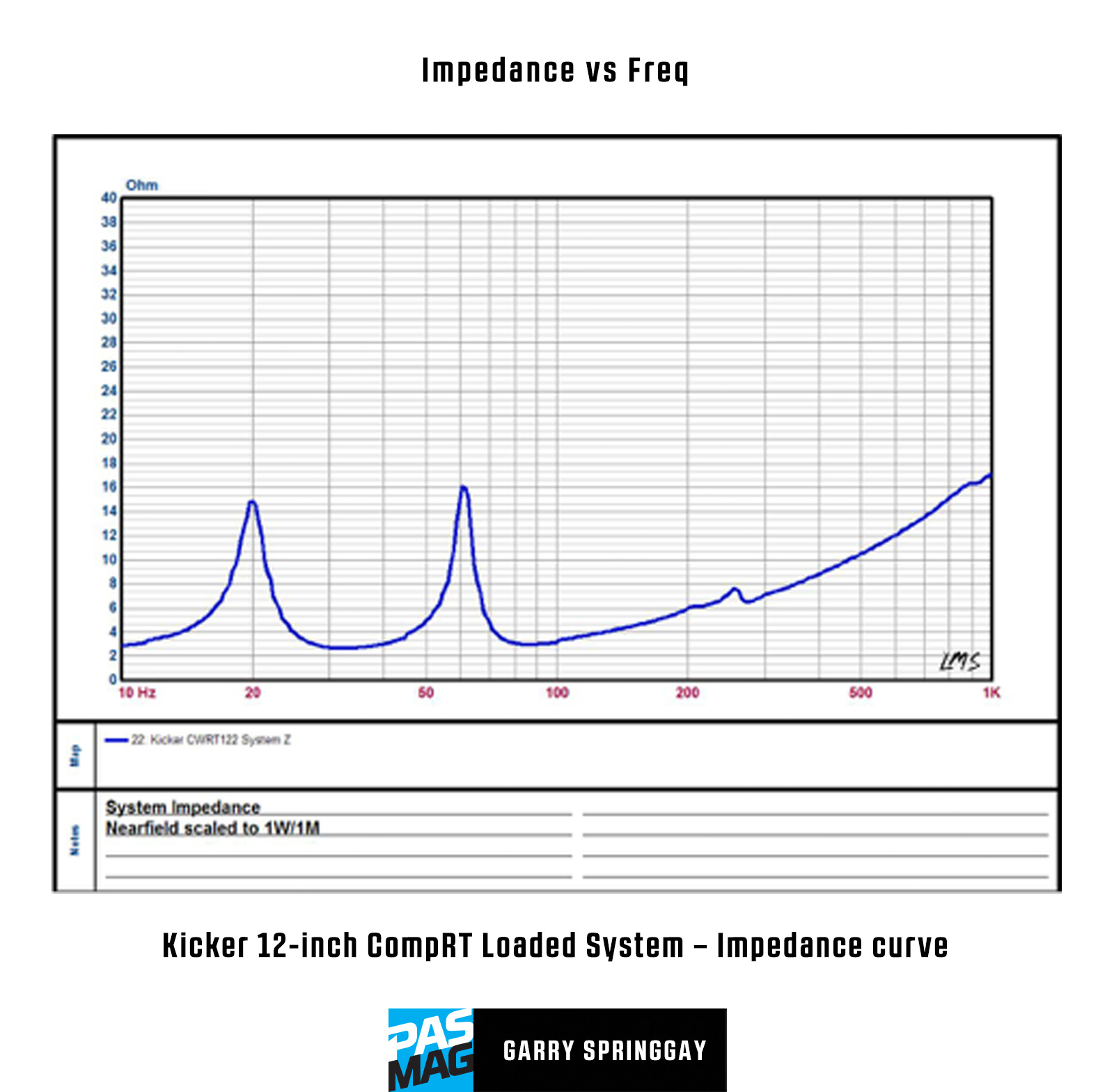 Conclusion
If you have been going without strong, deep bass in your ride because you couldn’t fit a typical enclosure in your available space, this system is going to make you a happy camper. For roughly the price of a good single woofer, you get a properly-built, accurately-tuned, fully-functional system. The incredibly shallow design will fit in almost any vehicle, and the 500-watt power handling capability provides great reliability, as well as plenty of output for almost anyone. What more can you ask for? Graphs Kicker 12-inch CompRT Loaded System – Nearfield Frequency Response Kicker 12-inch CompRT Loaded System – Impedance curve.