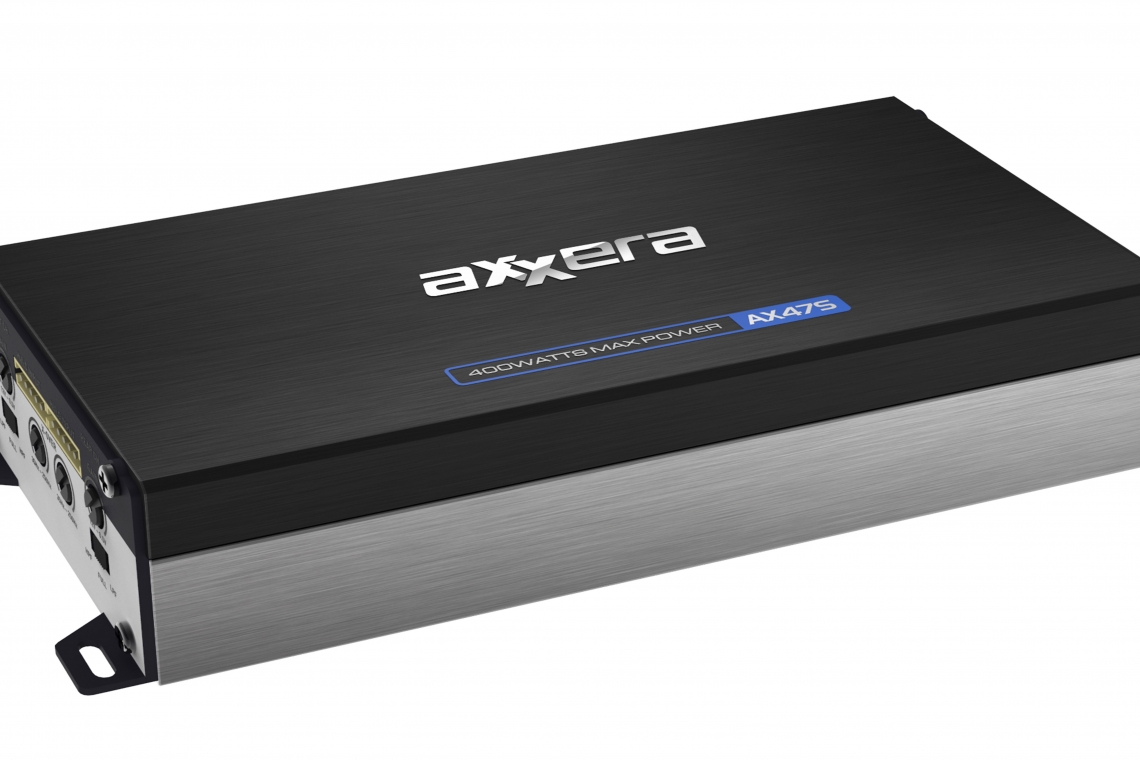 With the ever-growing popularity of UTVs and increasing motorcycle sales, the traditional car audio marketplace has developed an entire sub-category of ultra compact, powerful multi-channel amplifiers.

Obviously, space is at a premium in these vehicles, so the smaller the amplifier chassis, the better. The tiny Axxera AX47S four-channel amplifier by Dual Electronics Corporation is designed specifically for this new segment. With four channels rated at 92 watts each into two-ohms and measuring an incredibly small 5.9 x 3 x 1.5 inches, the Axxera is the smallest amp I’ve measured in quite a while. Despite its diminutive stature, this is a full-featured, no compromise amplifier. With a suggested retail price of only $199.99, your bank account won’t be compromised either.

FEATURES
The Axxera AX47S is a simple, rectangular shaped amplifier with connections and controls found on either end. Power and speaker connections are accomplished on one end of the amp via multi-pin Molex connectors and wire pigtails. Also found on this end of the amp is a 30 amp mini-ATC fuse. On the opposite end are socket connections for high or low level inputs, with both types of harnesses included in the box. Also found here are the gain and crossover controls. The amp can be set for full range, high pass or low pass operation, with a frequency adjustment range of 35 to 250 Hz. Front and rear channels are set up independently of each other, so it’s possible to use the front channels for satellite speakers and the rear channels bridged to a woofer.

Thanks to the amplifier’s highly efficient Class D topology, current consumption and heat buildup are minimized. The AX47S is designed with wide frequency bandwidth for sound quality comparable to a more traditional Class AB design. For easy interfacing with high level output radios, the amplifier is equipped with signal sensing on the high level inputs where a traditional turn on lead is not available.

LISTENING
For my listening session, I use the amplifier in a traditional three-channel configuration. The front channels are wired in stereo and set to full range operation to drive my reference component speakers. The rear channels are bridged to a 12-inch four-ohm woofer and after some experimentation, I settle on a low-pass crossover point of around 100 Hz. As always, because my listening is done in a quiet, specially designed for critical listening, I have the luxury of positioning myself perfectly for the optimum stereo image. Despite it’s somewhat rudimentary appearance and small physical size, the sound from the AX47S is impressive. The amplifier sounds good, exhibiting a natural transparency and delivering a detailed and defined stereo image. Power output is surprising, and more than once I find myself marveling at the sheer output this small amplifier is capable of.

Even with its highly efficient design, the amp gets quite warm during my two-hour listening session. Because it is so compact, installers may be tempted to stuff the amp into spaces that don’t provide adequate airspace. I would suggest to installers to pay attention, making sure the amp has sufficient breathing room to dissipate the heat as much as possible. This will become increasingly important as the enthusiasm level of the user goes up – especially if the amp is driving any two-ohm loads.

ON THE BENCH
On the test bench, the Axxera amplifier meets its published specifications, and I find nothing negative to note with its audio test specifications. Overall power efficiency is very good, as is the amplifier’s frequency response and signal-to-noise performance. Distortion is way below anything audible, and things like crosstalk and gain matching also show care and quality in the design.

CONCLUSION
If you are in the market for a very small footprint amplifier for your UTV, boat, motorcycle, or other size-restricted application, the Axxera AX47S represents one of the highest value solutions available.