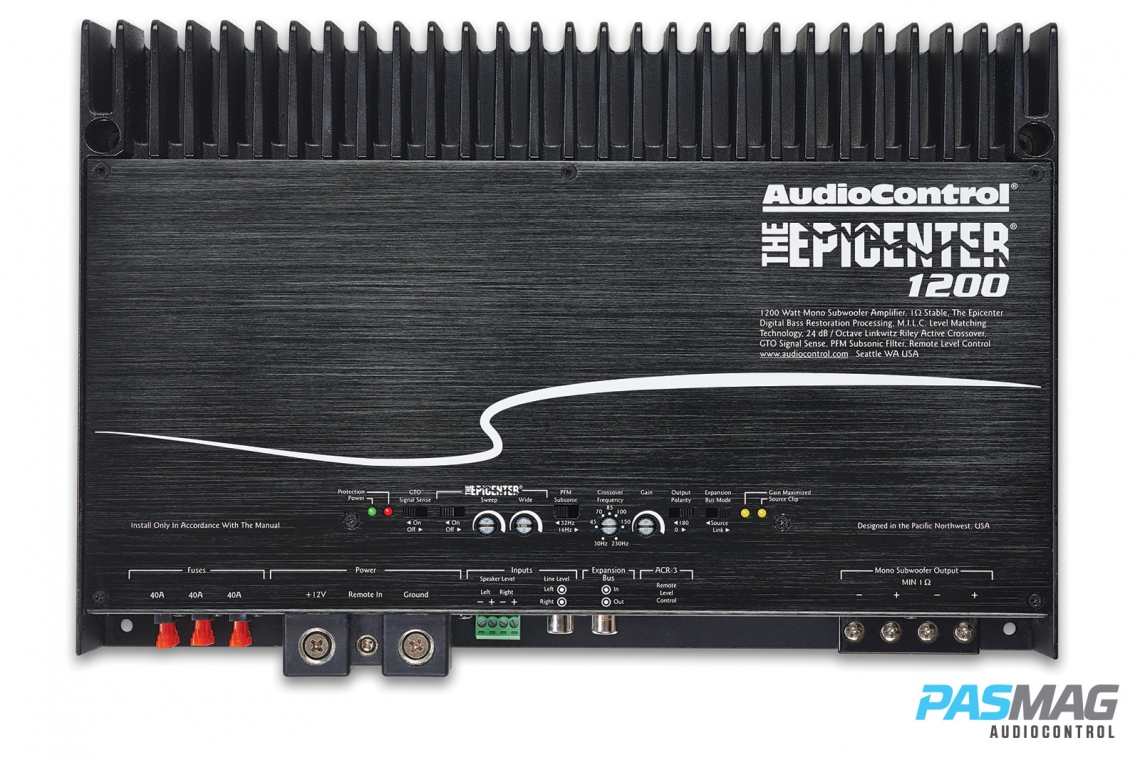 For the better part of 40 years, AudioControl has been “Making Good Sound Great.”

AudioControl’s National Sales Manager, Chris Bennett, sent over the big brother of the two for review. The Epicenter 1200 is rated to produce 400, 750 and 1,200 watts into 4, 2, and 1-ohm loads, respectively. The chassis is modestly sized for its output capabilities, measuring only 12 x 8 x 2 inches. Both the Epicenter 1200 and 600 models share the same set of features. Each amplifier has all connections located along the length of the front and a cleverly conceived anodized aluminum top cover hides the controls and provides style, as well as protection or the connections. The amps come with a dual function wired remote, which provides adjustment for the overall level as well as the amount of bass restoration applied. 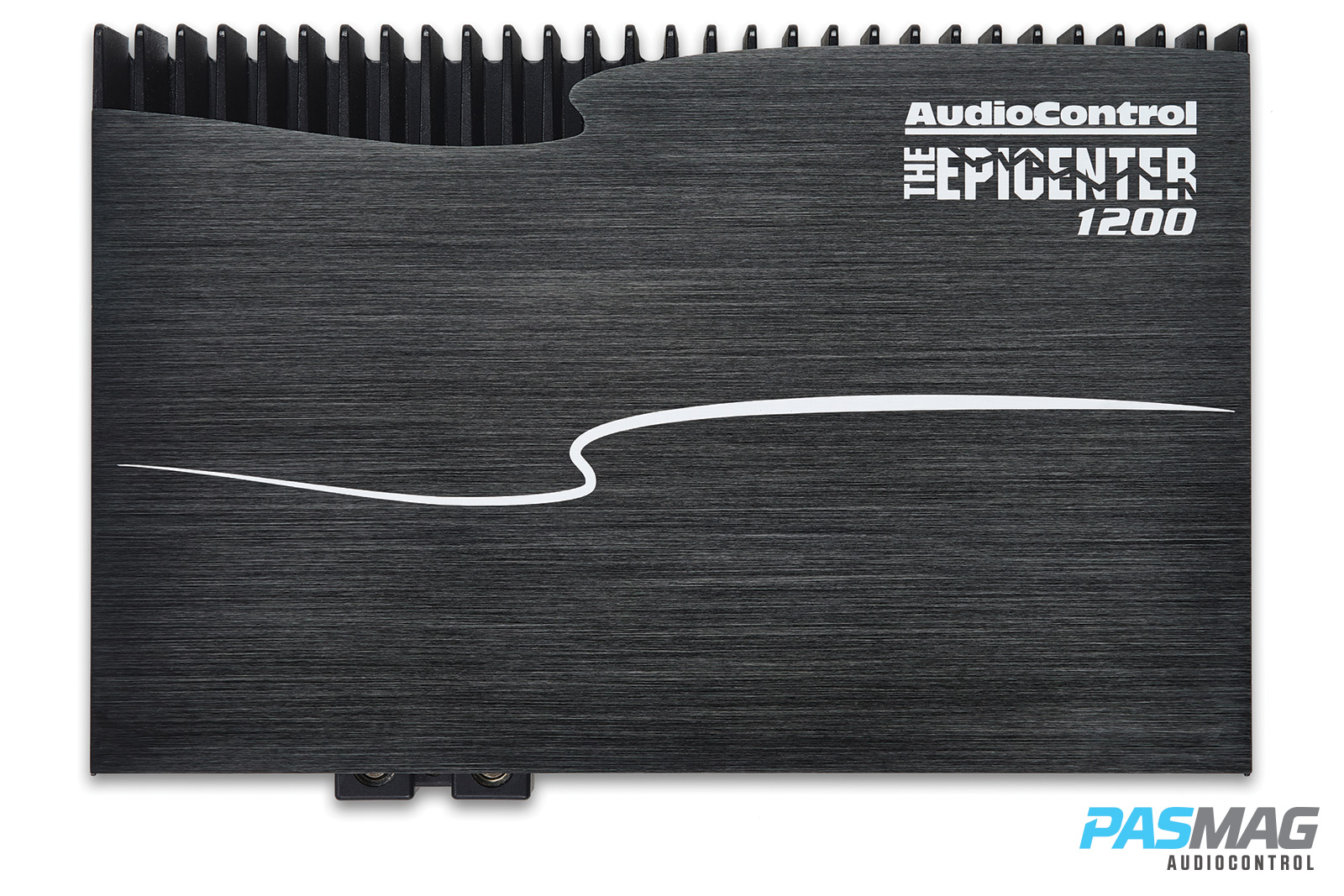 AudioControl has also designed The Epicenter amplifiers using an exclusive, solid one-piece chassis. The benefits are superior rigidity and high technical strength; and the one-piece cast heat sink’s superior thermal characteristics, which allows the amplifier to run “harder for longer.” The Epicenter 1200 is fitted with three 40-amp fuses and battery power terminals that accept 1/0-gauge cables, while the Epicenter 600 will accept 3-AG cables. Both amps have an “all business” look and feel. The speaker terminals off er paralleled pairs of positive and negative connections, accepting up to 6-gauge cables. Both high level and RCA inputs are available, and a pair of RCA outputs allows the “Expansion Bus” function to drive additional amplifiers and control them all with the first one. You can also use the Expansion Bus feature to drive a single woofer with a pair of amplifiers if desired. 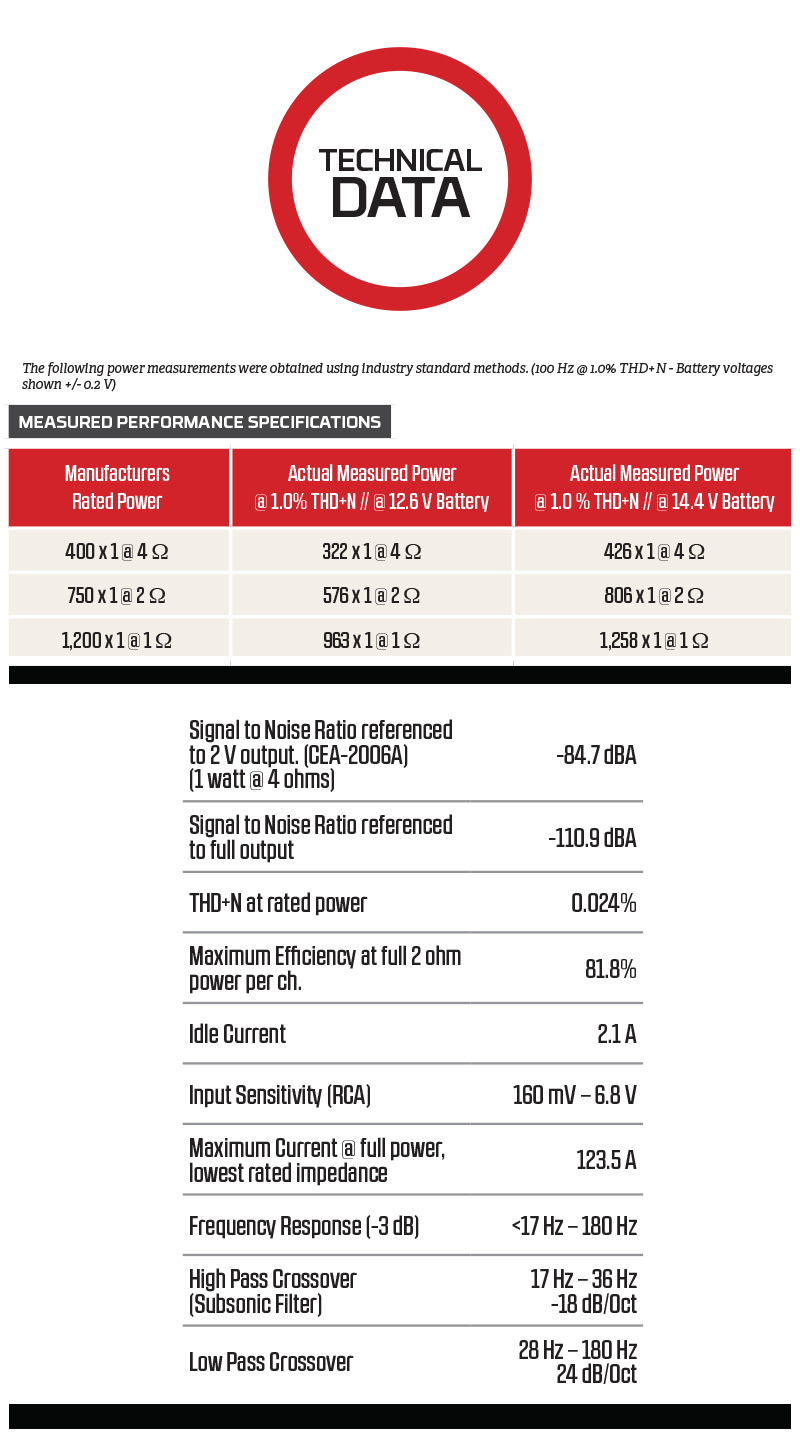 “WHAT REALLY SEPARATES THE EPICENTER AMPLIFIERS FROM ANY OTHER AMPLIFIER IS ITS PATENTED BASS RESTORATION CIRCUITRY.”

On the top of the amplifier are the adjustments and controls, laid out in a very logical and easy-to-use fashion. When it comes to figuring out how AudioControl products work, they provide some of the best written and entertaining owner’s manuals in the audio industry. They’re worth reading even if you already know what you’re doing. In addition to the usual gain and crossover controls, The Epicenter 1200 also features an output polarity switch — a switch to select the type of input signal that will be used to turn the amp on, the expansion bus switch and, of course, the controls for the Epicenter circuitry.

Before I get to that bit of wizardry, I should mention that the amp’s crossover is a -24 dB/Oct Linkwitz-Riley alignment, and there is a Programmable Frequency Match (PFM) subsonic filter with either a 16 Hz or 32 Hz setting. This filter is -18 dB/Oct. If you are adding the amp to an OEM system without a dedicated amp turn-on wire, you simply set the GTO Signal Sense turn-on to use the input signal to turn things on.

The Epicenter amplifiers also feature a unique blue LED backdrop emanating from the heatsink. The LEDs act as both a subtle sound enhancement when operating, as well as provide light patterns that act as a troubleshooting reference guide for the user. This goes hand-in-hand with AudioControl's MILC (Maximum Input Level Control), a patent pending level-setting circuit that prevents clipping and distortion. If the incoming waveform is clipping, the LED on the unit will shine forth and let you know. This lets you adjust to optimize the level of the incoming audio signal. 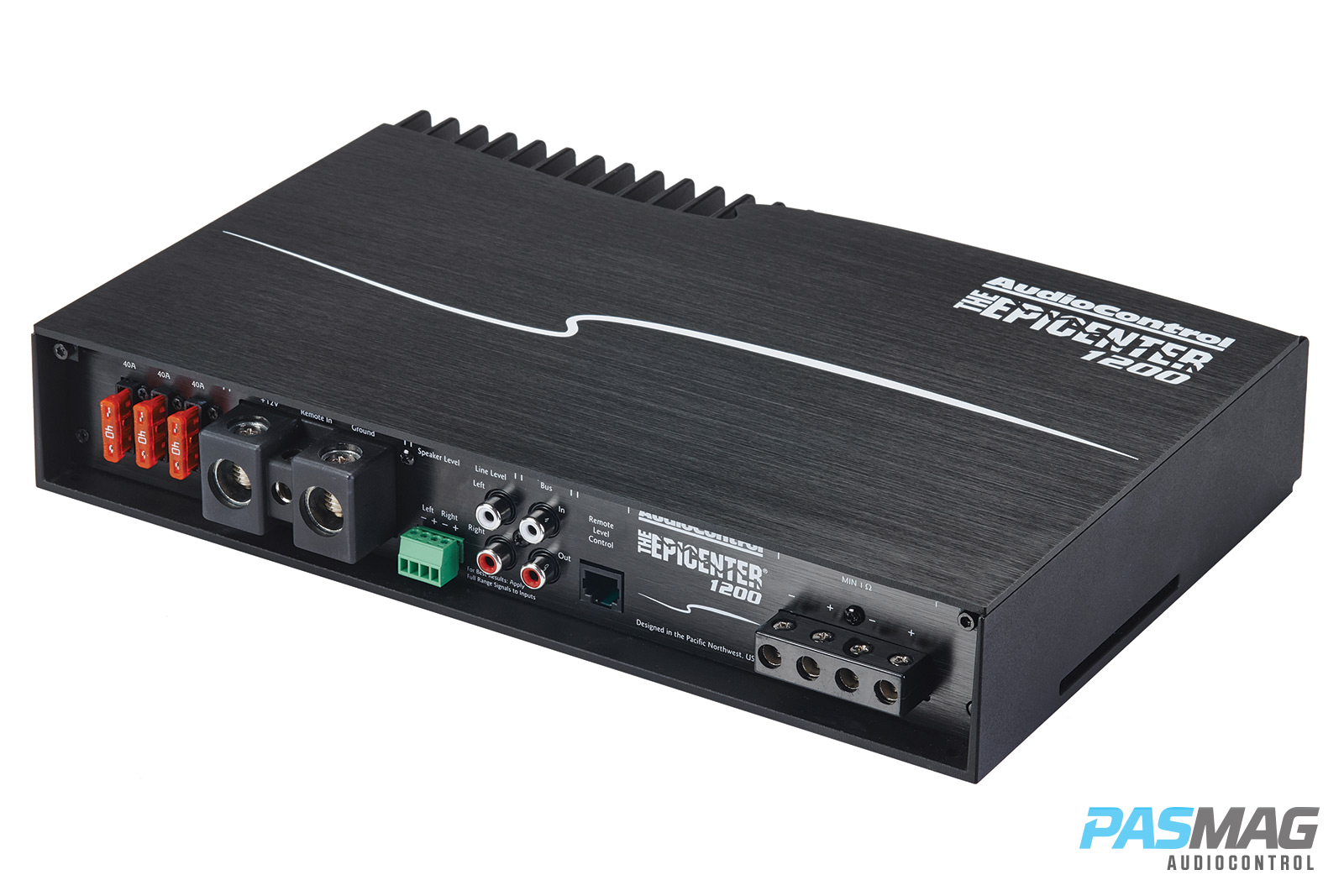 All of that is well and good, but what really separates the Epicenter amplifiers from any other subwoofer amplifier is the its patented bass restoration circuitry. Without getting all propeller headed, the Epicenter does what other amplifiers can’t. Rather than simply apply some so I leave the PFM subsonic filter amount of bass EQ at some frequency, the Epicenter actually reads the fundamental tones in the musical input signal and improves the depth and realism of the bass by adding low frequency information based on the harmonics of the bass in your music. The circuitry has two controls, labeled “Sweep” and “Wide.” Sweep control allows you to select the center frequency of the effect — between 27 and 63 Hz. The wide adjustment provides control of the effective width or “Q” of the filter. Once these are set, you can use the remote level adjustment to tailor the output for whatever you’re listening to. What this all means is that the Epicenter provides additional low frequency output that is driven by the music you are playing, rather than just some fixed amount of boost. The result can be startling if you aren’t prepared for it. 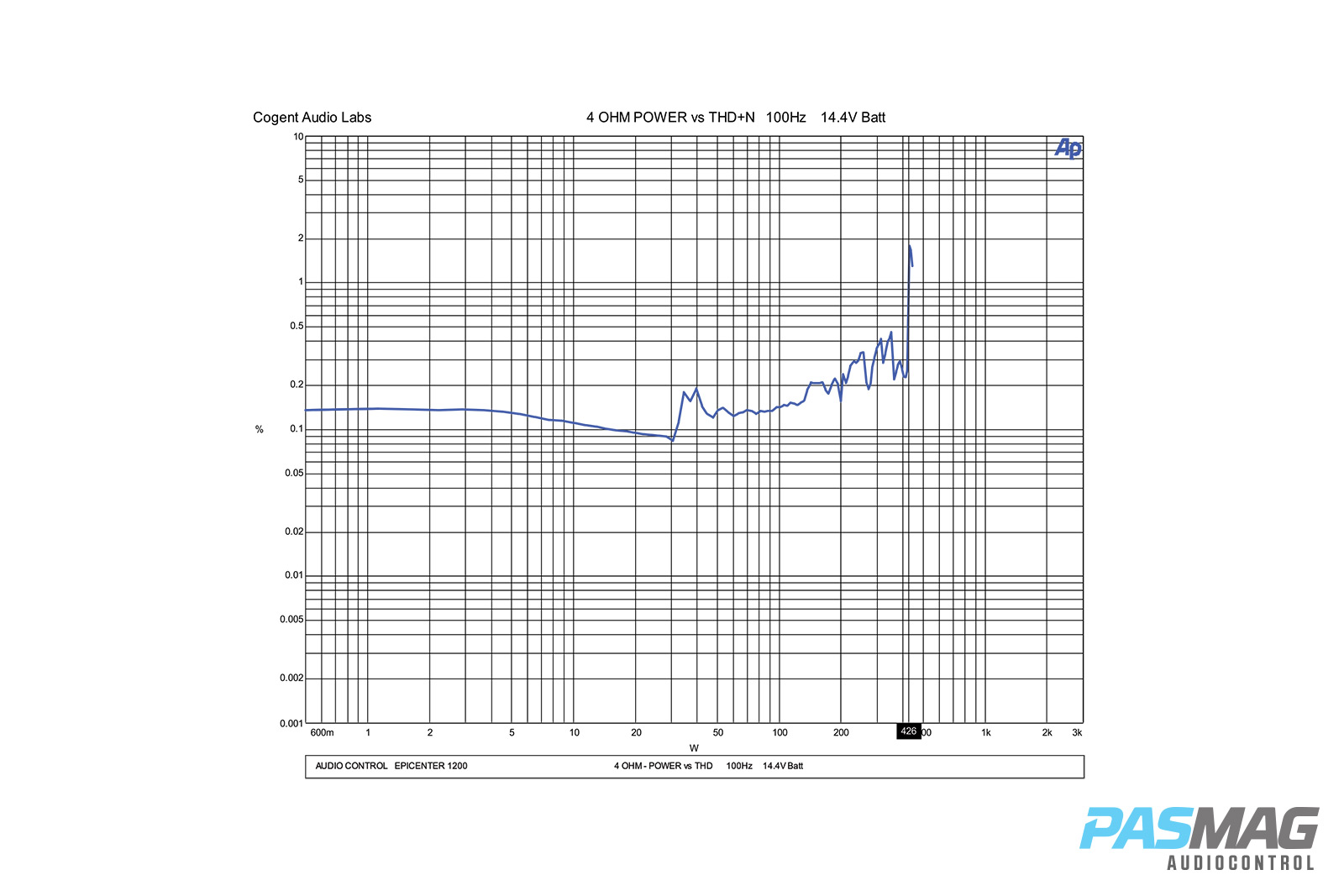 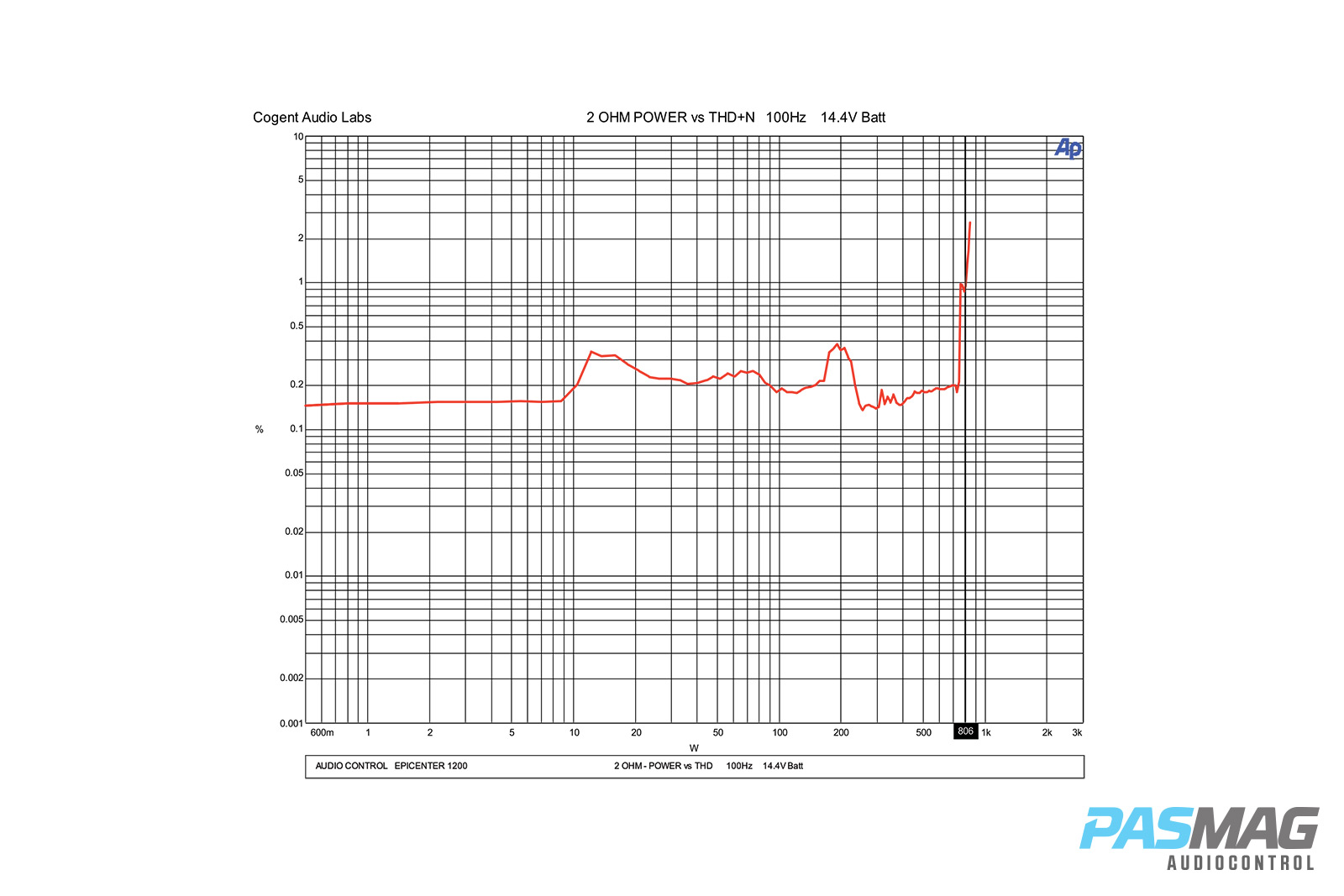 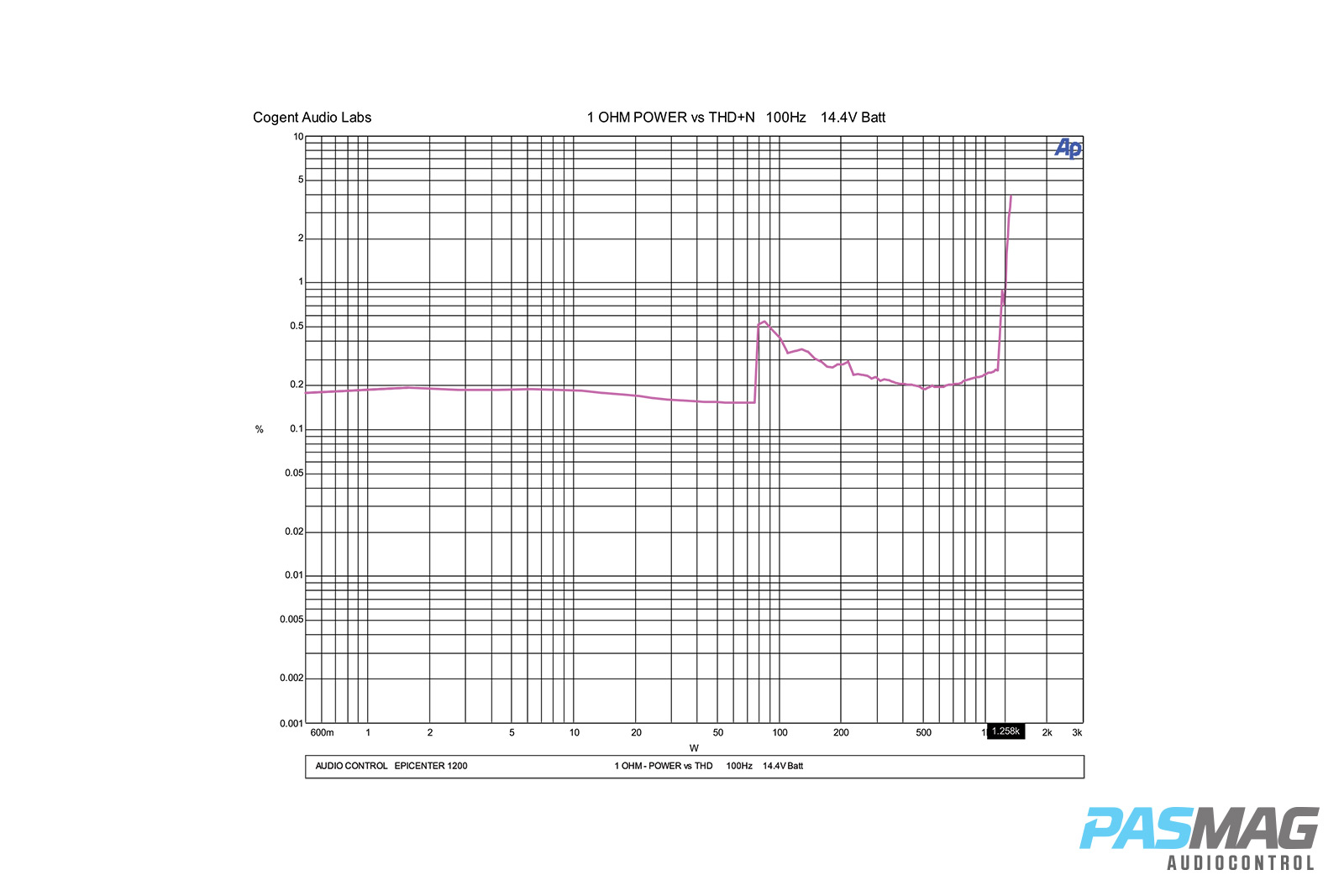 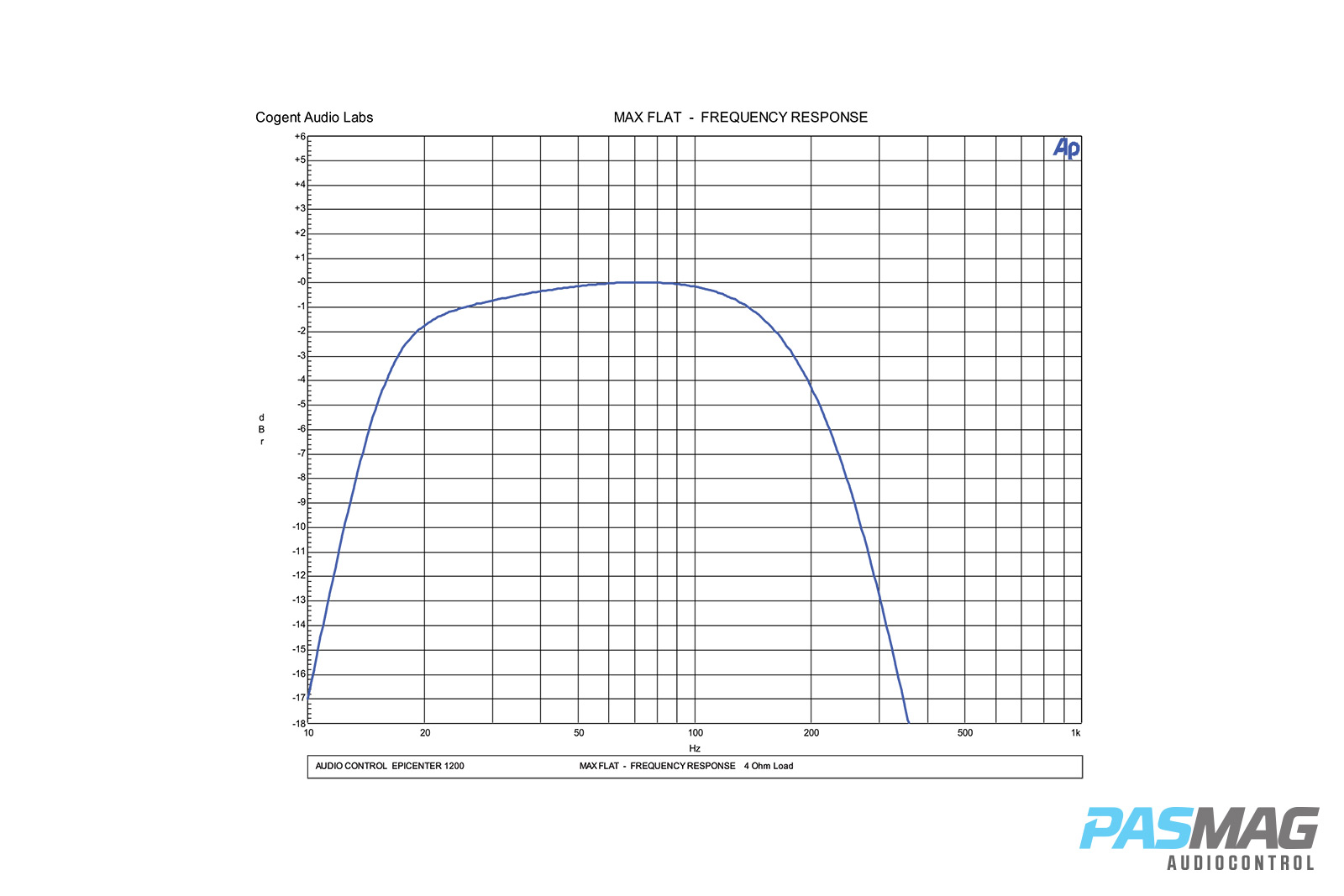 As luck would have it, I am very familiar with how an Epicenter works, as I used to be an AudioControl dealer back in the early ’90s. I sold a ton of these things. Now that it’s built right into a good amplifier, it’s just that much simpler to take advantage of. I connect The Epicenter 1200 to a pair of 15-inch subwoofers that I happen to be testing for another project. The woofers are in a sealed enclosure, so I leave the PFM subsonic filter t 16 Hz and set the crossover to about 80 Hz. 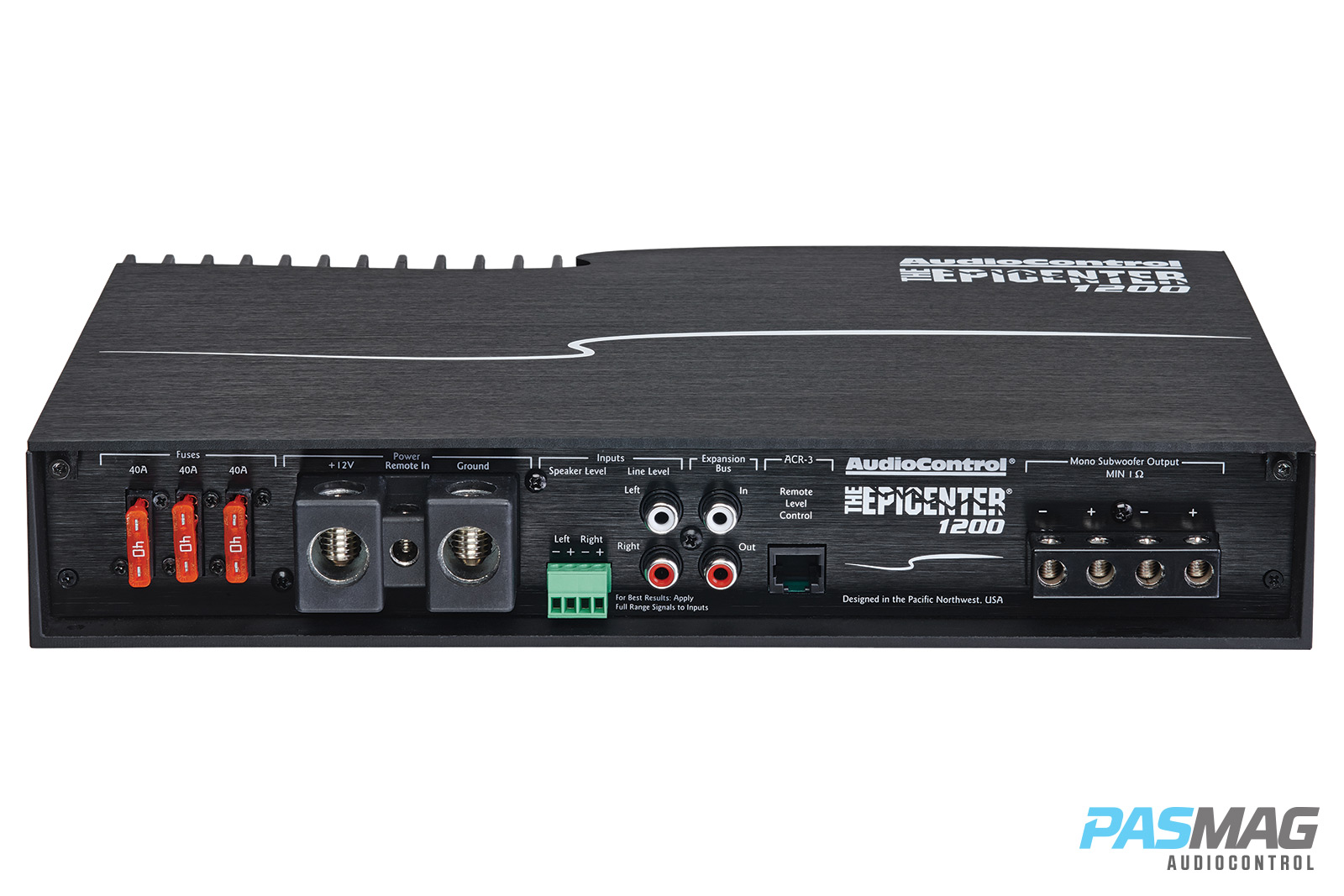 To get an idea of just how the amp performs, I turn the Epicenter off for the first bit of listening. I begin with one of my favorite discs to evaluate subwoofer amplifiers, Essential Yello. Loaded with very deep bass from synthesizers, it’s a good test for any bass system, plus it’s fun to listen to. The amplifier proves to be more than capable, and produces a great and tight bottom end. I dig out another favorite disc with incredible bass definition, the Telarc arecording of a band called California Project, who performs the Beach Boys tunes of the 1960s. Their version of Surfin’ USA has what might be the best recorded kick drum in history. With plenty of power on tap, the amp handles the dynamics of this CD without breaking a sweat.

“TUNES LIKE DEEP PURPLE’S RAT BAT BLUE AND LED ZEPPLIN’S FOUR STICKS SUDDENLY SOUND LIKE THEY HAVE BEEN REMASTERED ON MODERN GEAR."

Now that I know the amp was more than up to the task, I engage the Epicenter circuitry and give the system a real challenge by switching to classic rock tunes that are decidedly lacking modern bass in the recordings. Tunes like Deep Purple’s Rat Bat Blue and Led Zepplin’s Four Sticks suddenly sound like they have been remastered on modern gear and had the bass we heard live back in the day. These old tunes sound amazing and are so much more enjoyable to listen to. I’ll just say this: if you listen to any music that was recorded before about 1980, you need one of these amps. The benefits of The Epicenter are not only limited to improving old recordings. Everything sounds better, with improved realism and authority, even FM radio. Of course, like with all good things, you can overdo it, but that’s precisely what the remote level control is meant for. 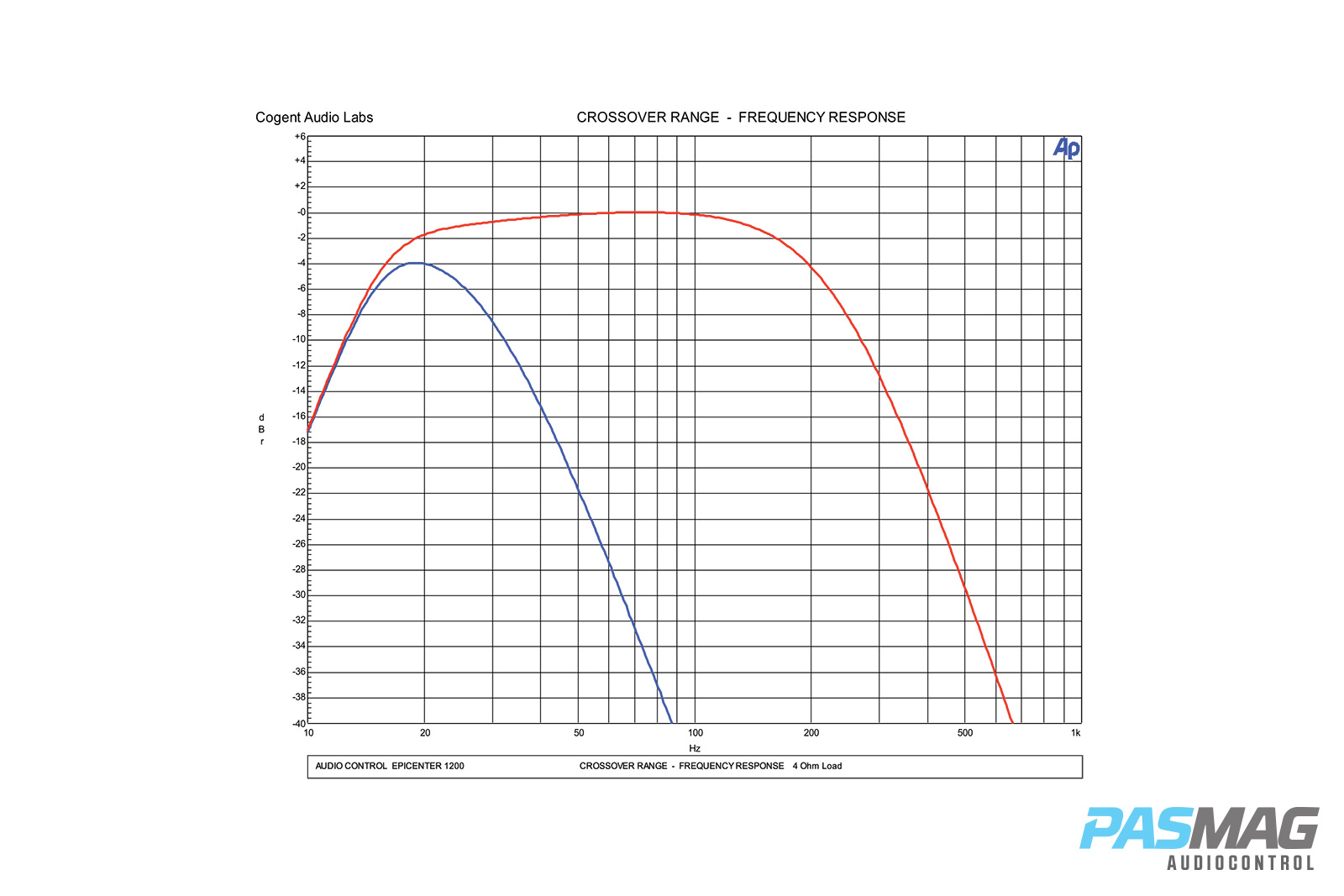 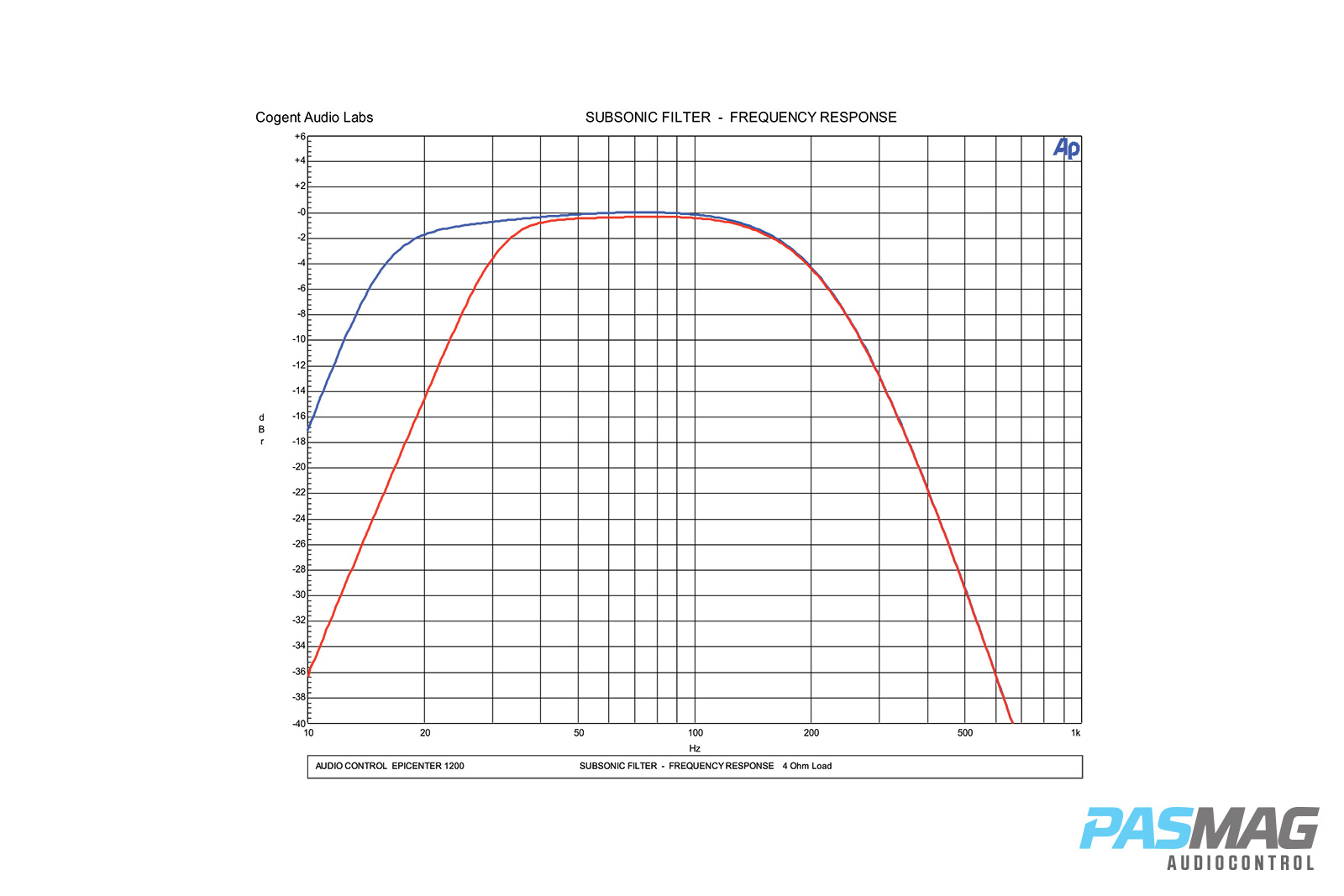 On the deadly accurate Cogent test bench, I put the amplifier through the usual extensive battery of tests and I’m happy to report that it performs in excess of its published specifications. I also note the amplifier has fan assisted cooling, but this is one of the quietest I’ve seen. No one will have to worry about fan noise with this one, even if it’s mounted inside a quiet interior. 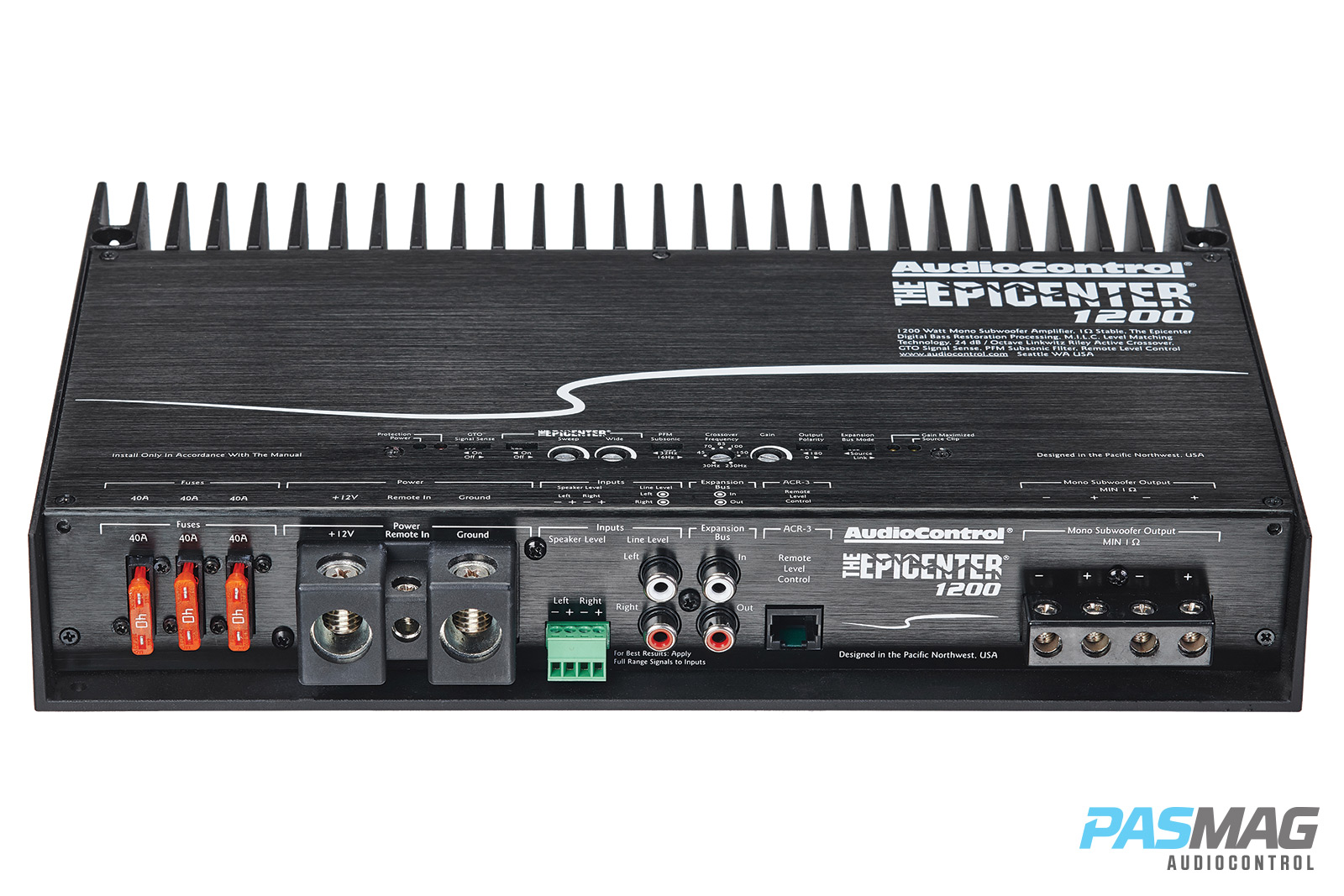 It had been a long time since I played around with an Epicenter and, to be honest, I’d forgotten how enjoyable the thing can be when used properly. By building a quality amplifier with easy system integration and expansion, and combining it with the bass restoration capabilities of the Epicenter, AudioControl has made it dead simple for anyone to add this cool technology to their system. I won’t be surprised if the second production run sells out quickly as well.