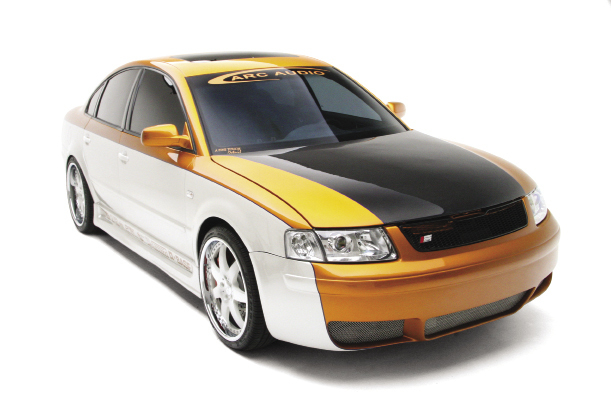 Although most automotive enthusiasts enjoy customizing their cars, it takes a truly determined individual to dedicate the massive amount of time and resources needed to build the vehicle of their dreams. Enthusiast Fred Lynch has been obsessed with building his 2001 Volkswagen Passat into a personal work of art and it shows. Lynch has been involved in many extravagant builds appearing in our magazine for car audio manufacture ARC Audio and this one aimed to top them all.

This project originally started back in November of 2000 with Lynch buying his new 2001 VW Passat (originally purchased as a daily driver while his other vehicle was being built for sound quality competition circuits.

This project originally started back in November of 2000 with Lynch buying his new 2001 VW Passat (originally purchased as a daily driver while his other vehicle was being built for sound quality competition circuits. Lynch still claims he never planned to modify his Passat but a call from a close friend to build a demo car for the 2001 Consumer Electronics Show (CES) changed everything.

Almost 8 years, 3 full builds, 4 different system configurations, 3 different paint jobs and hundreds of late nights later, Lynch decided to take matters into his own hands and start over again, his way! But life took its turn and with the birth of Lynch’s son (Fred Jr.) the now stripped chassis was destined to sit and wait. After sitting in his garage for nearly three years, Lynch received a phone call asking if the build could be completed in time upcoming 2008 SEMA Show in Las Vegas, NV. With only 36 days till showtime, Passat version 4 was underway and Lynch realized he was going to need some serious help to finish on time.

Lynch recruited the help of his super supportive boss Demitrios Karabinis CEO of ARC Audio, close friends Phil Adams, Paul and John Vina and several others to make it happen. Since this vehicle’s main focus was sound, the initial plan of attack started with full Dynamat Extreme and Dynaliner sound deadening on every part of the vehicle. 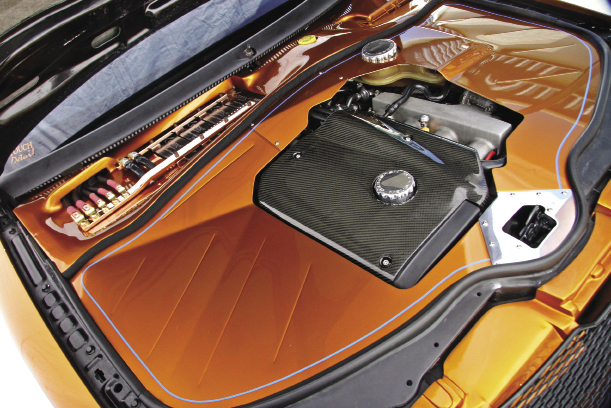 With the vehicle sonically dead, the team started fabricating the extensive custom interior using a large combination of fiberglass, ABS Plastic, bendy board, Baltic Birch framing in combination with parts of the factory panels to create the full custom paneled interior creating the projects custom sound stage. The front stage started with an externally-vented, forward-firing subwoofer enclosure mounted in the center of the front dashboard to house the Dynaudio Esotar 12-inch subwoofer complimenting the symmetrical dash design for the proposed Dynaudio 3-way speakers in the front area sides.

A new “phantom dashboard” was fabricated and designed by the team to conceal the primary speakers and locations for the sound system eliminating the ability for the listeners to have visual influence on how the system is going to sound by seeing the speaker location or speakers brand. When it came to choosing the right speakers, Lynch with help from industry veteran Emilio Mandalios hand picked a pair of Dynaudio Esotar2 E650 6.5-inch midrange speakers and Dynaudio Esotar2 E110 full format tweeters to create this high end rolling concert hall. For a very musical and highly impactive mid bass, the decision was made to use a pair of Dynaudio MW182 Midbass drivers that were installed into custom kick panels 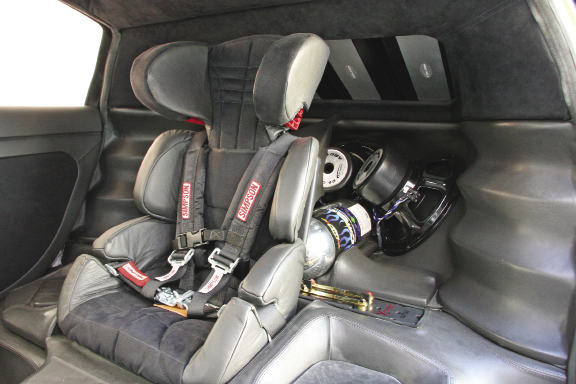 that are vented to the outside of the vehicle in an aperodic style enclosure with water resistance materials..

Lynch then installed an Apogee Electronics mini D/A converter converting the optical source signal to a DBX482 Pro Audio sound processor that was converted to 12 volts so it could be used in a vehicle and linked to the factory-equipped RJ45 balanced Ethernet connections on the Arc Audio signature edition amplifiers. Spicing things up with some color, an array of custom interior lighting products from VARAD and an LED underbody kit were used to light things up. 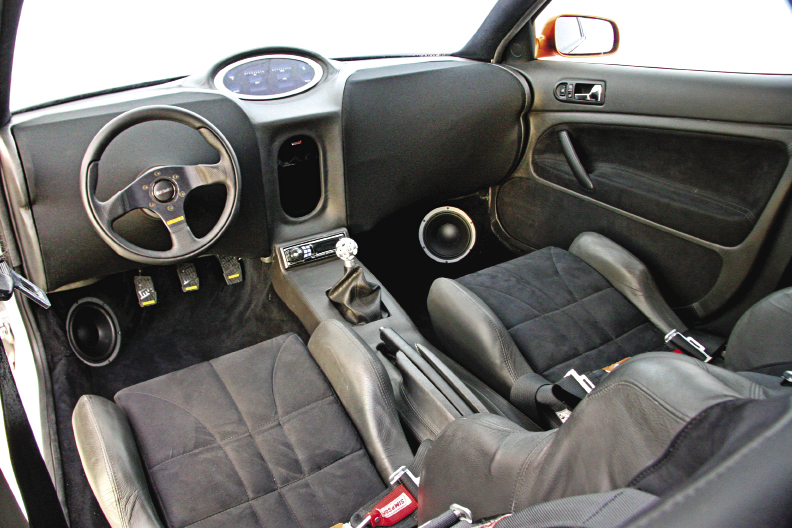 After all of the interior panels were finished Vince Delgado of Seat Works in Sacramento, CA took over to immaculately customize every surface of the interior in a carefully selected combination of Katzkin leather and suede. The Interior was elegantly detailed in running lengths of flowing French stitched seams with no compromise to detail. 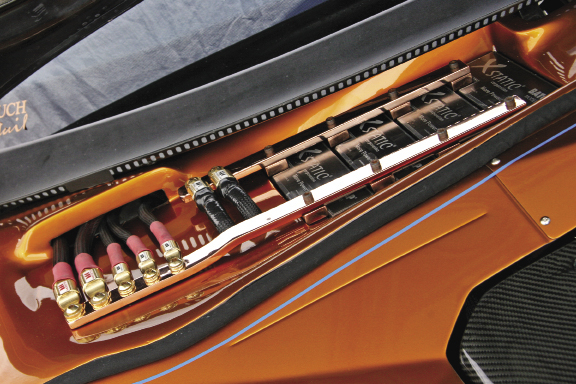 For the exterior of the vehicle, Lynch contacted friend and automotive vehicle designer Chip Foose. Coincidently Foose was preparing to release his new BASF paint line at SEMA, so with free reign on the paint and body styling the decision was made to keep the existing RS type body kit from Extreme Dimensions and carbon fiber hood from Carbon Creations. With the Foose-inspired design in hand and the clock still ticking, the team at Miracle Auto Body in Modesto, CA painted the Passat in BASF Cardinal Pearl White with Foose Butterscotch Orange.

Moving onto the Passat’s engine bay, the work of prominent VW / Audi tuner APR armed the Passat with an APR Stage III+ turbo system estimated to produce 344hp and 322 lbs-ft of torque and a Quaife Limited Slip Differential. Then, to finish things off, a custom modified stainless Neuspeed exhaust 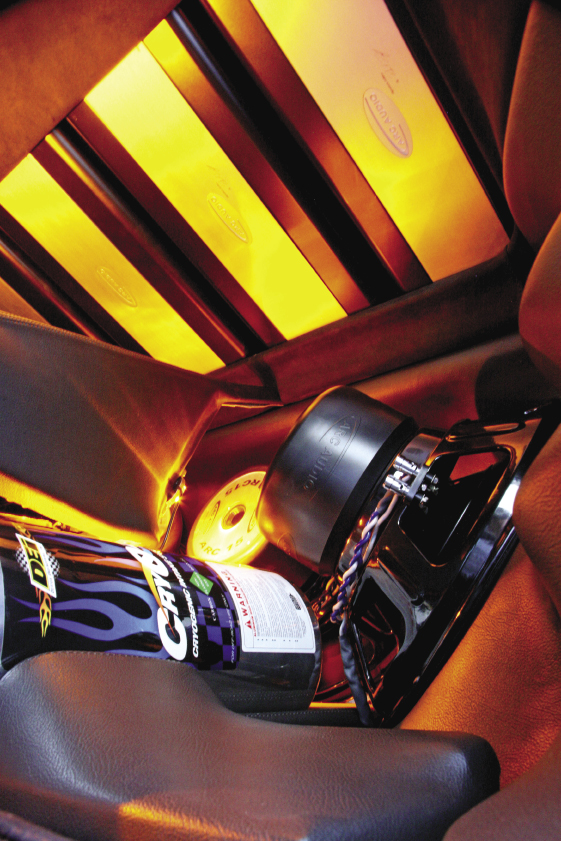 system was installed and a hand-formed all aluminum engine bay cover and custom battery tray was made by the crew at BRE Rods and Customs in Salida CA. A newly released K40 RL360 and K40 EX Laser Diffuser provide radar detection and protection.

Since completion, this Passat has been featured at the SEMA show in 2008 and 2009 along with the 2009 Consumer Electronics Show. Lynch has also been active driving to events throughout California, emphasizing his “Why build it if you aren’t going to drive it?” motto. Although Lynch insists this project is now complete, many insiders (us included) can’t help but wonder if there will be a version 5?