Starboy: A Tuner’s Dream In The Sunshine State 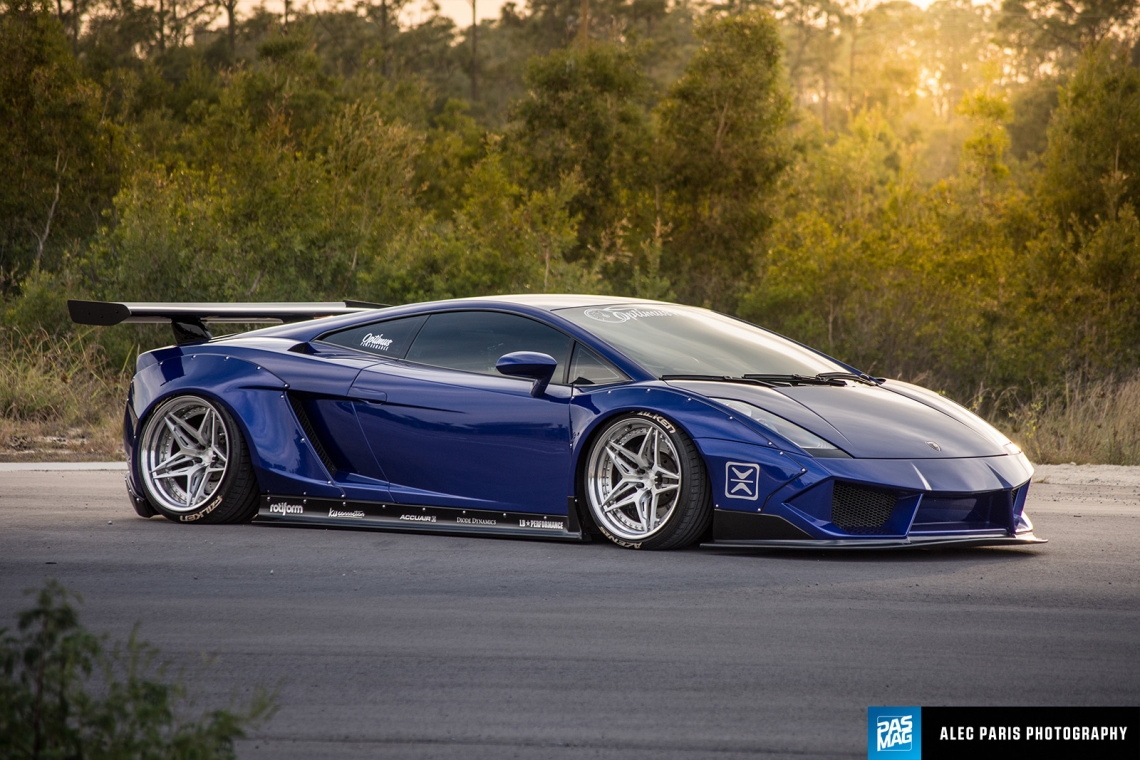 It’s a beautiful thing when the world of high society exotics and tuner culture meet, and when it comes to Allen Wasko’s twin-turbo Liberty Walk Gallardo, the two worlds come together in perfect, awe-inspiring harmony.

Like many people who own dream supercars, Wasko’s love for Lamborghinis started long before taking ownership, but he’s no stranger to high performance V10 engines. Previous to the Gallardo you see here, Wasko owned a Dodge Viper, a bona fide widow-maker in its own right, and that is just one of a few previous muscle icons in his garage. In addition to the Viper, he had some minor modification experience with a Z06 Corvette and a Foose Mustang. In 2015, it was time to put his muscle days behind him and finally realize his exotic dream. He pulled the trigger and purchased the Gallardo with a smile on his face. 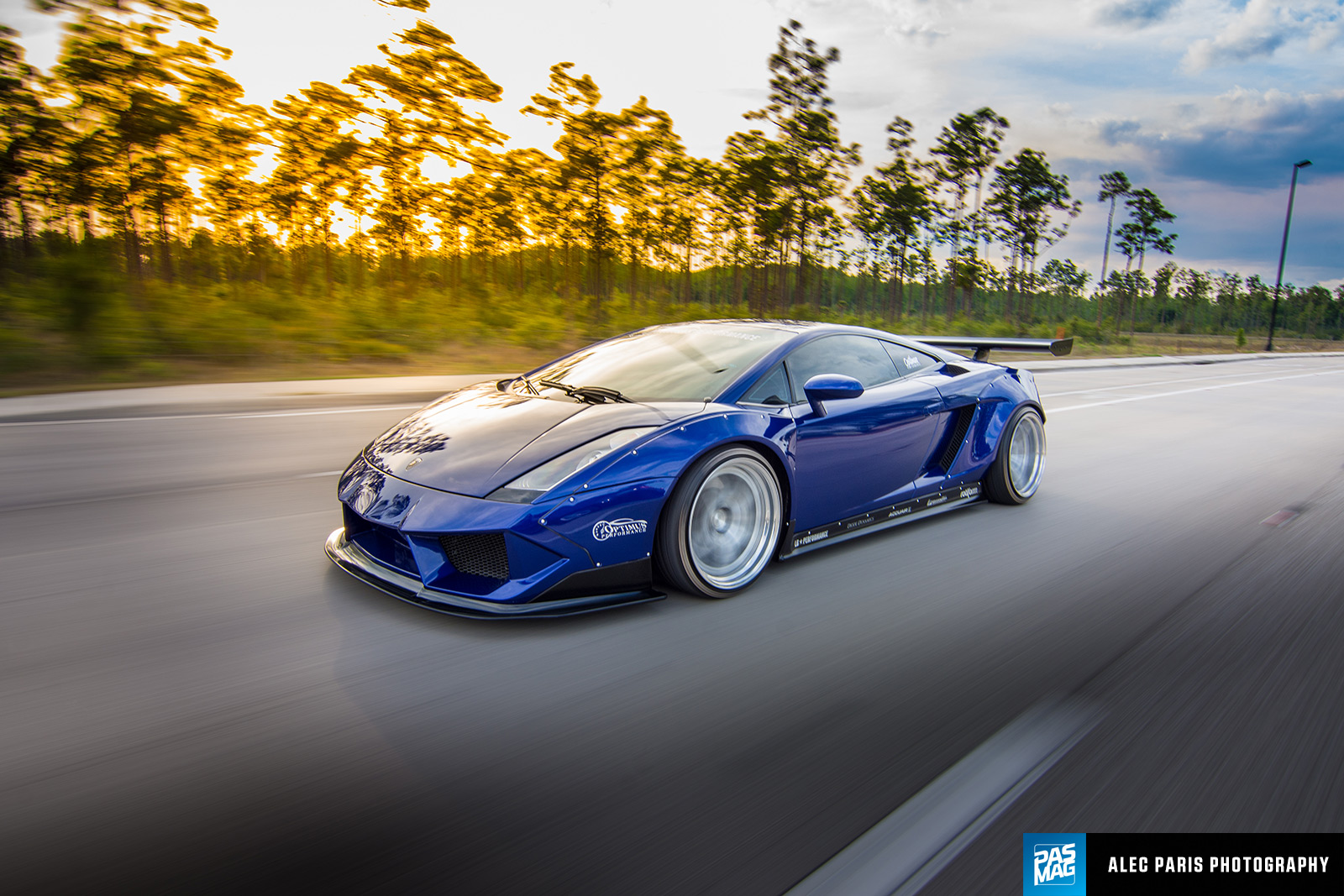 For a large amount of exotic owners, that is where the story would end. They would sign the dotted line, climb into their dream car, and drive off into the sunset, visiting the dealership periodically for scheduled maintenance. Thankfully for us, Wasko is not your typical exotic owner. After seeing the guys at Optimus Performance in Fort Myers build their first Liberty Walk Lamborghini, his whole world was flipped upside down. He knew that the minor modification experience he had with previous cars hadn’t prepared him for what was coming next, but there was no stopping it now. He had to go all out with this car. 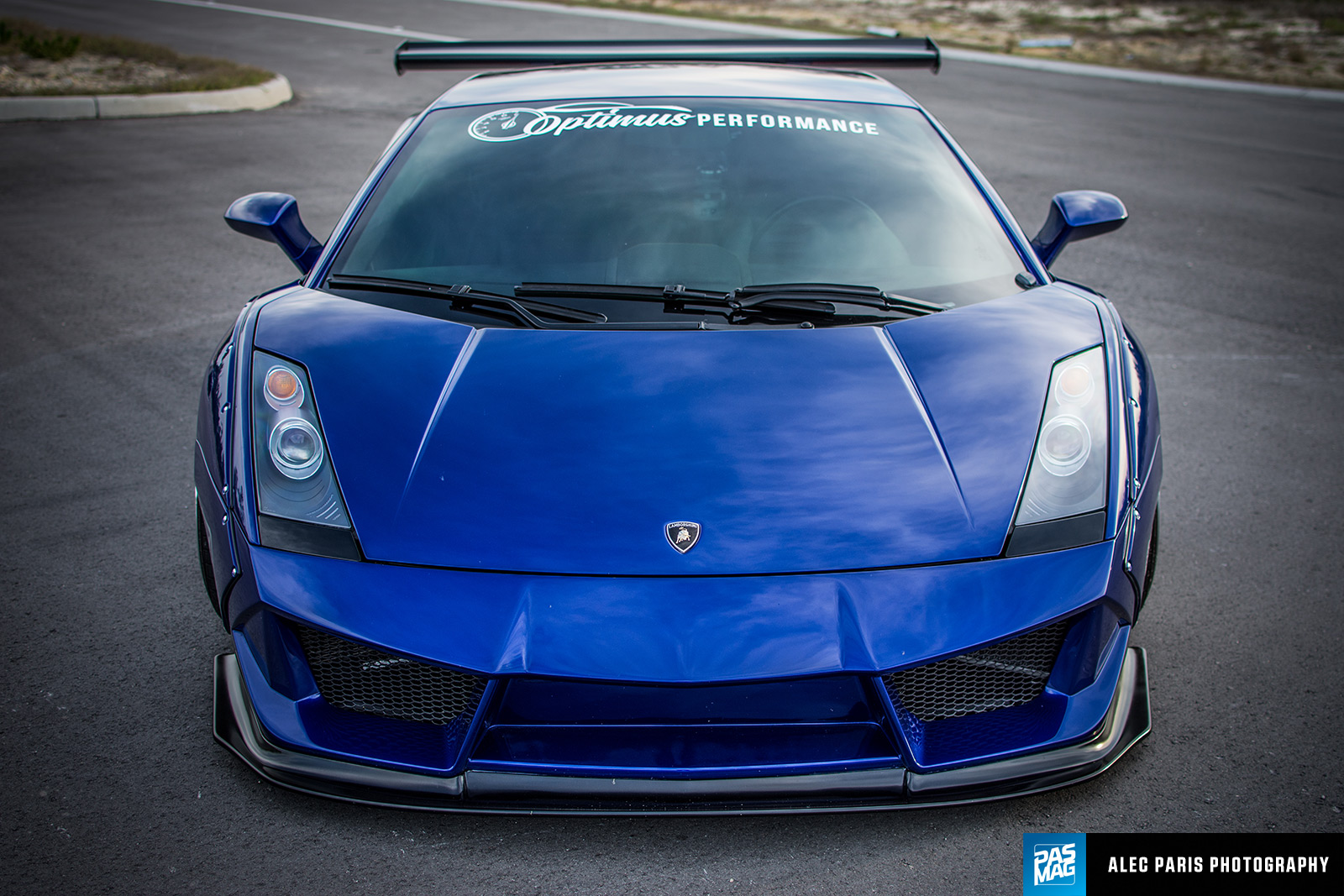 It wasn’t long after catching wide body fever that the completely stock, bright yellow Lamborghini Gallardo was completely stripped down at Optimus Performance. In house paint legend Will Alecia, commonly known as “Wet Willie” went to work, painting the car a stunning Ultrasonic Blue Mica with a subtle pink pearl beneath the surface. The paint is somewhat similar in tone to a factory option blue, but much deeper and multi-dimensional thanks to the pearlescent effect, which really pops in the right light. Wet Willie clearly knows what he’s doing in the booth. 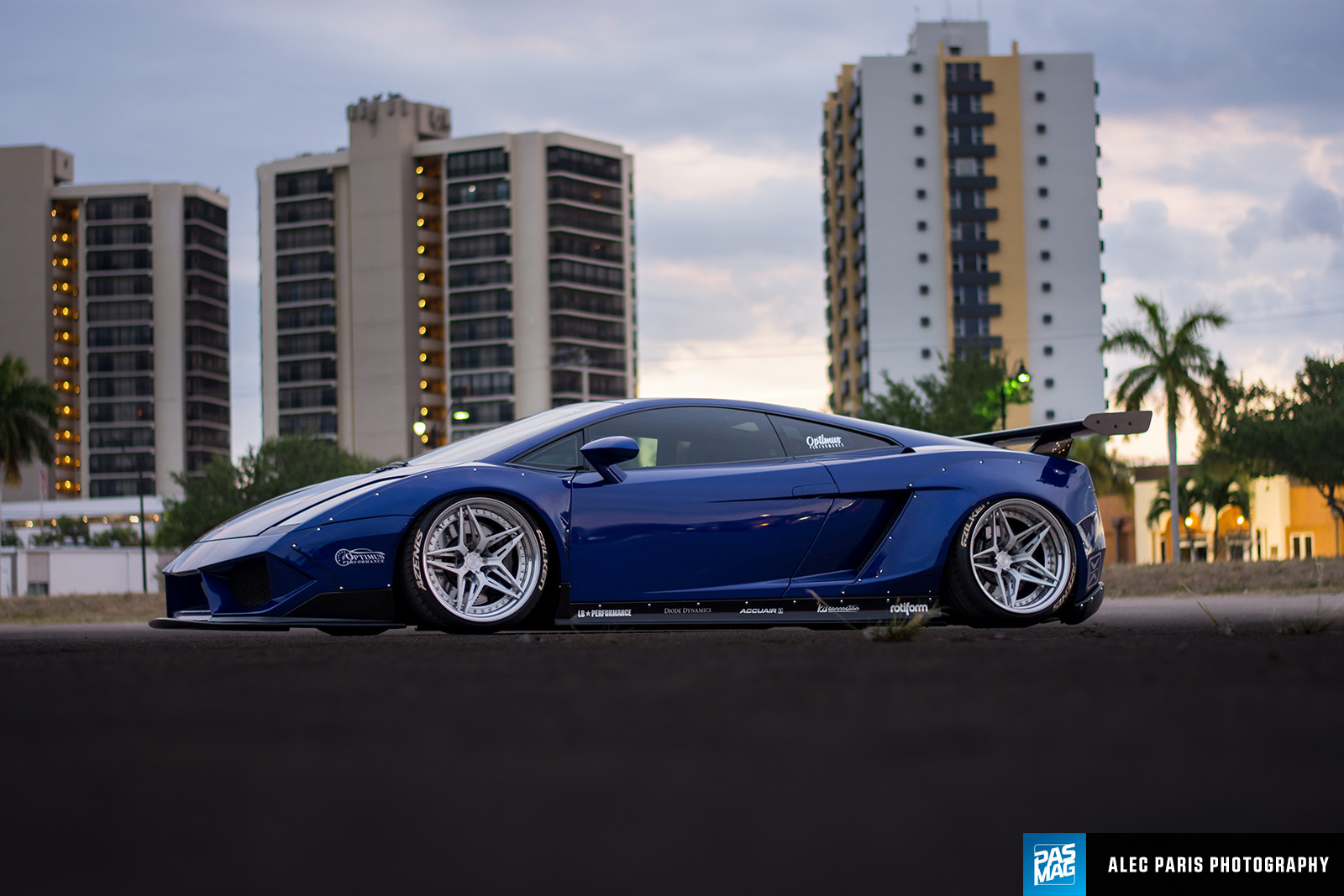 In preparation for the Liberty Walk kit, Wasko and the crew at Optimus Performance decided that an air ride system would be ideal for both fitment and overall cool factor. To do this properly, they went with the best in the business. A custom bag-over-strut setup from Universal Air makes up the actual air bag section, and a full Accuair system with E-level takes care of air management and functionality. The front hood storage compartment in the Gallardo isn’t typically large enough for mass practical storage, but it does happen to be the perfect size to conceal a beautiful air tank setup with hard lines. 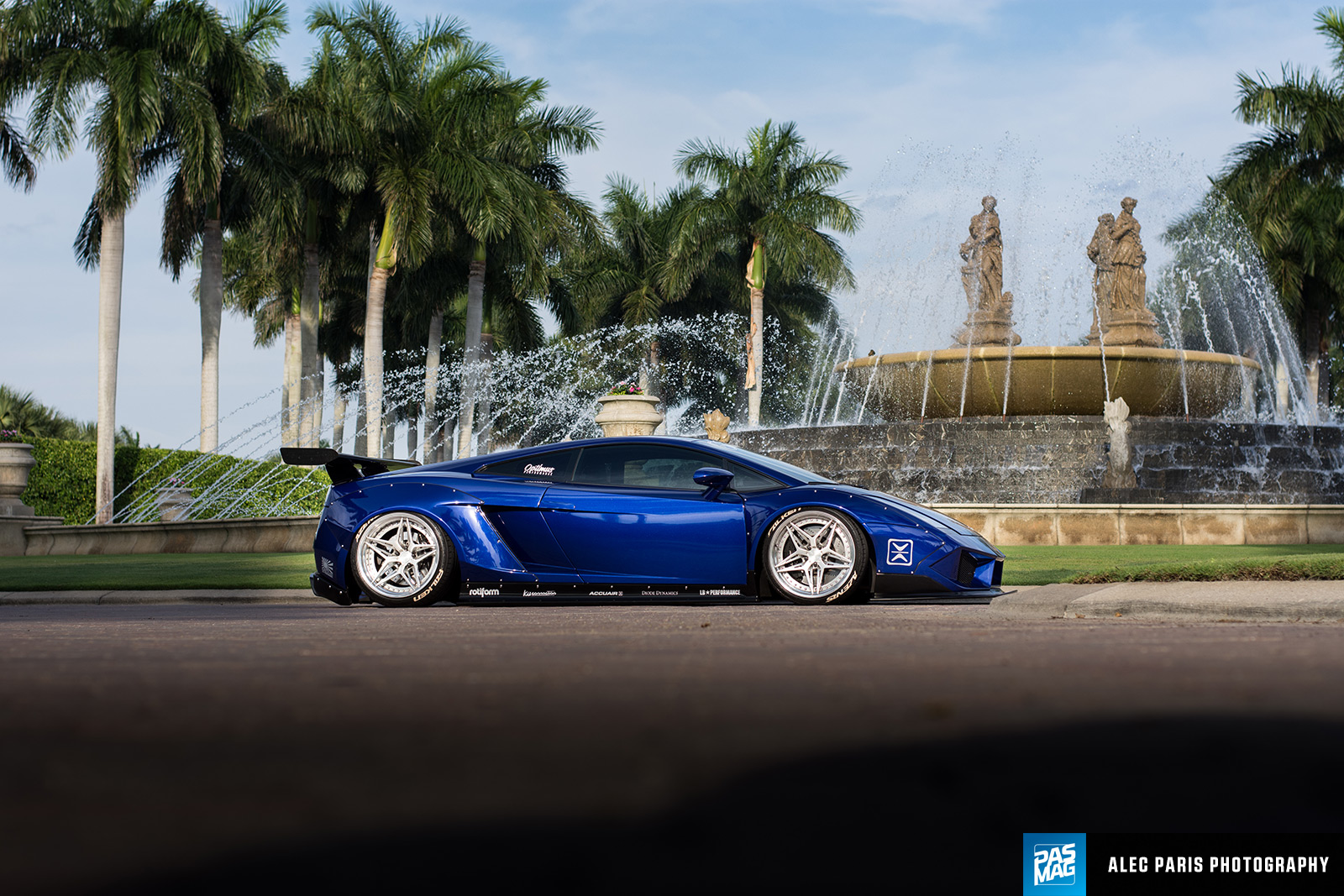 From there, it was finally time to bring Wasko’s Lamborghini to the same level as the one that made him fall in love. Installing a wide body kit as intricate as the Liberty Walk Gallardo kit can be daunting, as it requires a bit of finesse to get things fitting just right. Thankfully, the guys at Optimus Performance have experience in this department, having built the first complete Liberty Walk Gallardo in the United States – the very same one that won Wasko over. Installation went as smoothly as the lines on the kit’s extra wide fender flares, and the kit’s fitment could not be better. 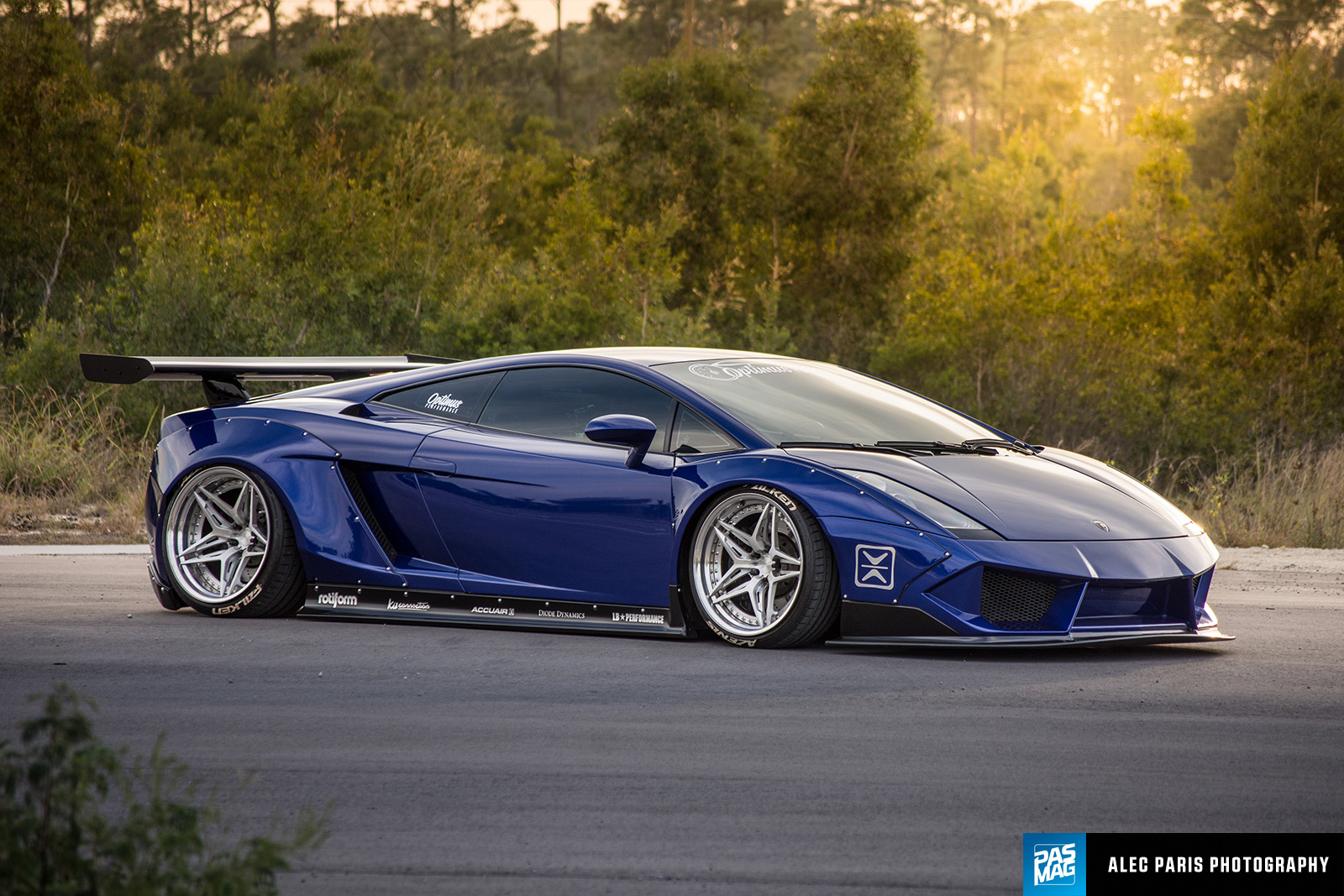 Once the air suspension was functional, the kit installed seamlessly, and the stunning paint given its final clear coat, the build began to take shape. To complete the look without going overboard, Wasko wanted to find the perfect set of wheels to compliment the lines of the Liberty Walk kit and the color of Wet Willie’s deep blue paint job. Enter Rotiform and their desire to meet the custom needs of every customer. Some of you may be familiar with Rotiform’s 3-piece forged VDA wheel. That very wheel design was prototyped on Wasko’s car, and it turned out to be the perfect coup de grâce to finish off the Gallardo’s design. The star-shaped design makes this car look ready for the big screen – and that’s just where it ended up. We’ll come back to that in a minute. 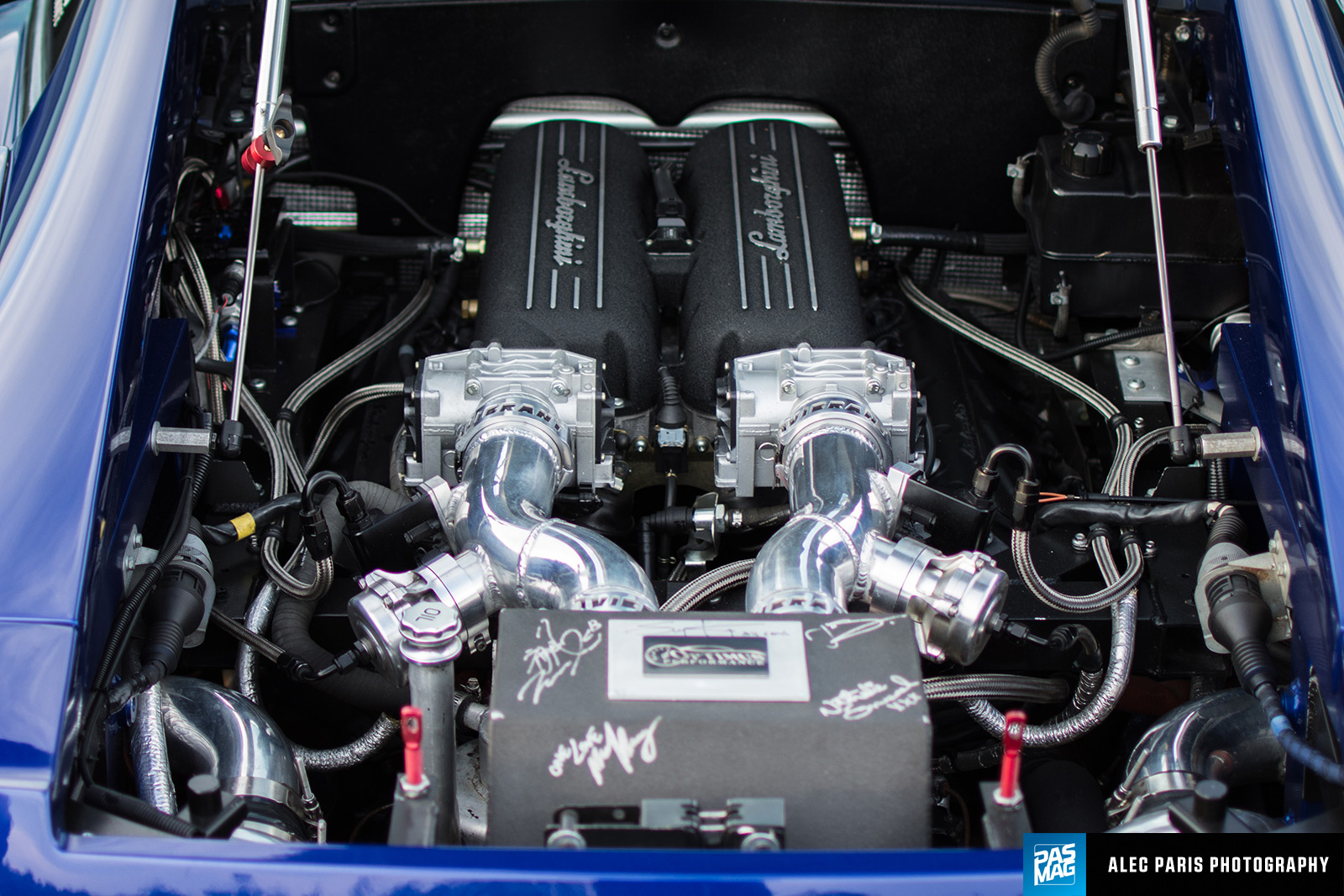 With air suspension, a wide body kit, custom pearlescent paint, and bespoke wheels from one of the biggest names in the industry on an exotic European car, one might make the mistake of assuming this Gallardo is some sort of show-dates-only trailer queen, but that couldn’t be further from the truth. Around the back, the once near-opaque rear grille has been replaced with a transparent peek-a-boo window, showing off two CT43X triple ball bearing turbochargers from Competition Turbo, wrapped in DEI turbo blankets presumably to prevent the melting of the aforementioned window. 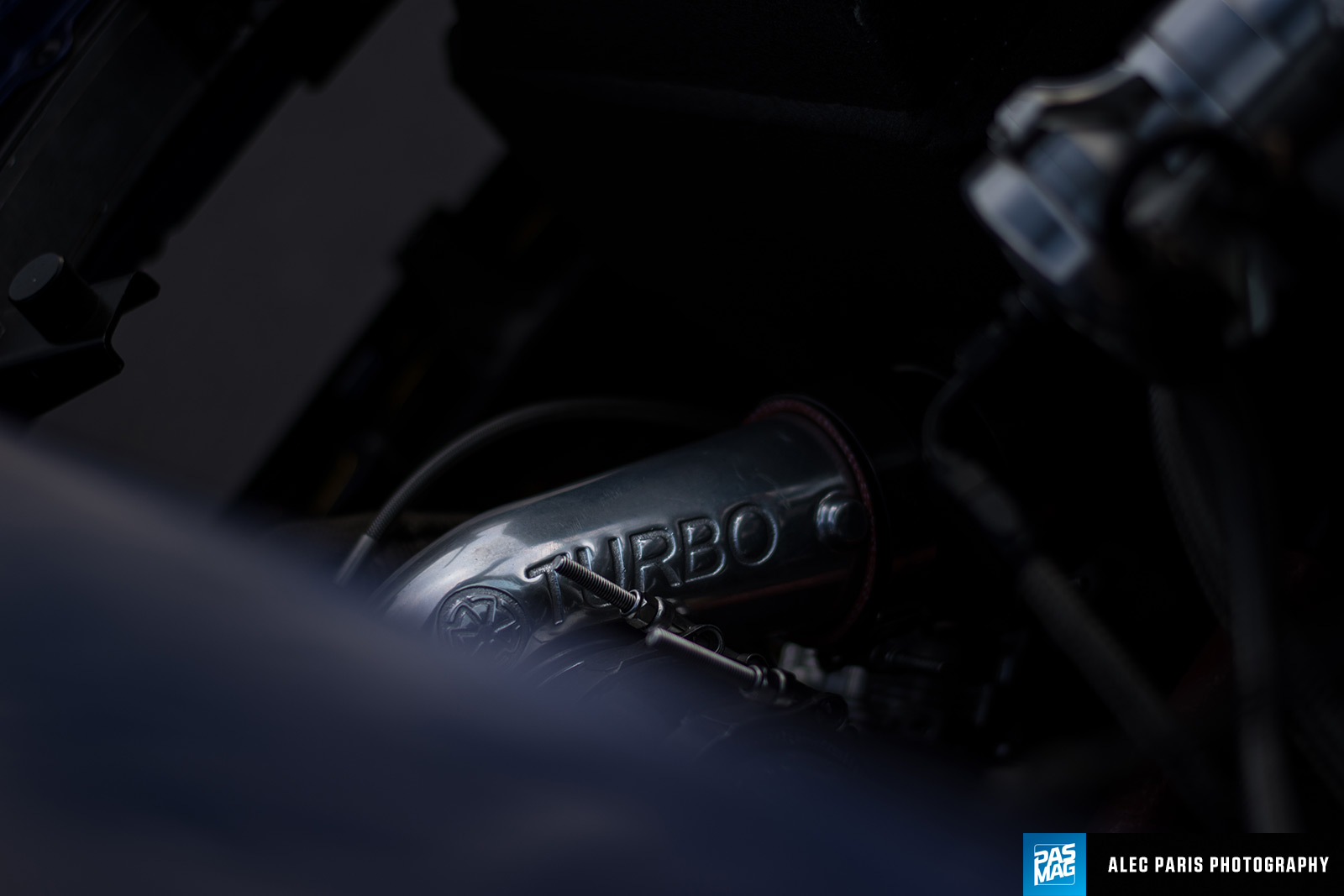 The Competition Turbo system was built and tuned in-house at Optimus Performance by the mastermind Michael Randles. Vibrant Performance took care of the system’s piping needs for maximum uninterrupted air flow to and from the turbochargers, and a Haltech ECU piggybacks off of an SAFC to keep things running smoothly throughout, as well as to monitor performance, temperatures, and boost levels. The nice thing about the high-output V10 in the Gallardo is that you can opt for reliability by running low boost, and still make big power. The Competition Turbo setup operates at 6 PSI, but that’s enough to push power from the Gallardo’s factory 500 to an ample 700+ horsepower – perfect for those wide open, sun-soaked Florida highways. 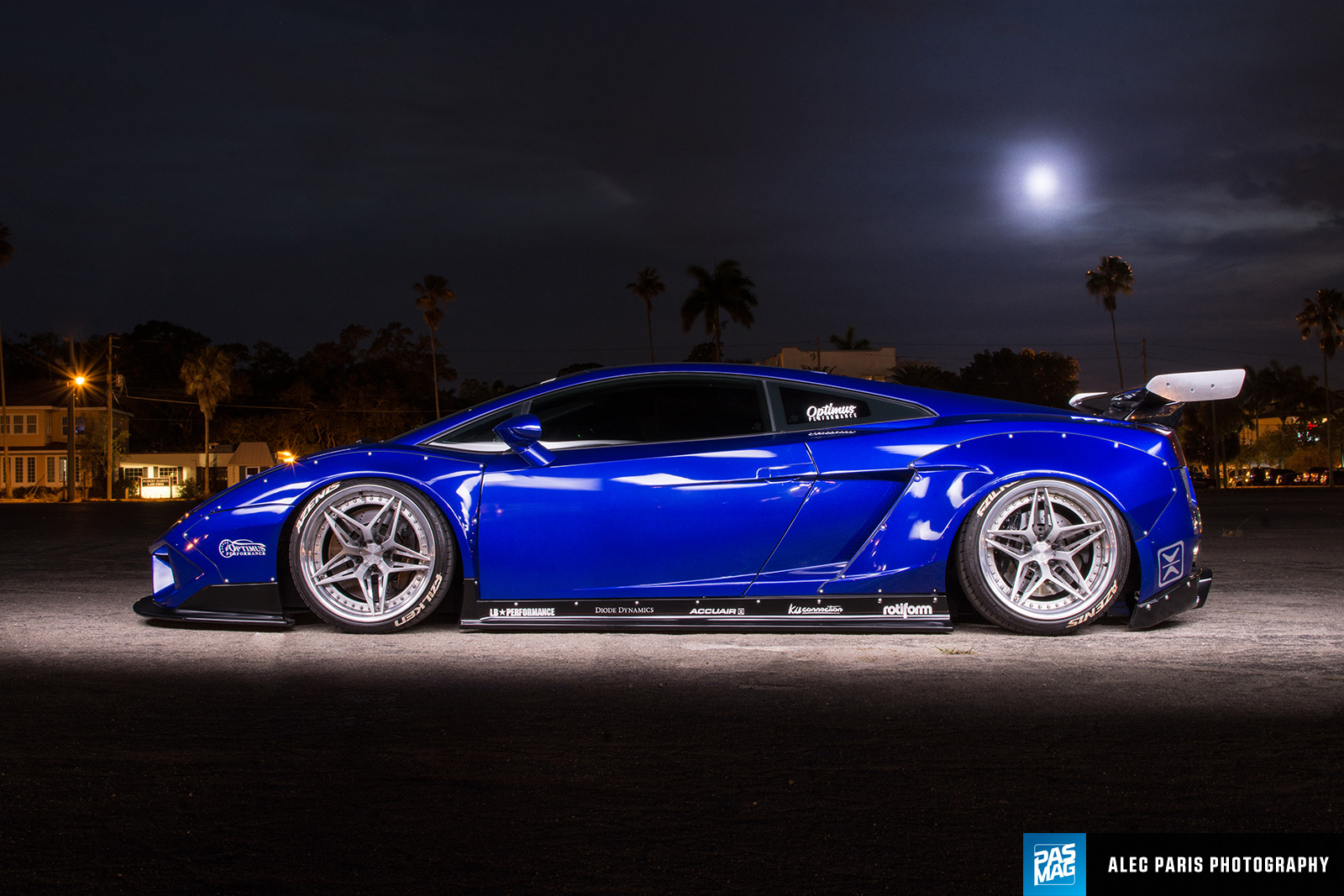 I mentioned before that the car was headed for the big screen. Some of our readers who were watching closely during The Fate of the Furious may already recognize Wasko’s ride as one of the only cars seen driving in the iconic movie scene in which the Fast & Furious heroes enter a government impound garage full of modified cars. When the opportunity presented itself, Wasko didn’t hesitate. The only thing left to complete this tuner’s dream was to be featured in the film series that started it all for so many others like him. The car was a huge hit on the set in Atlanta, even with the film’s director.

The journey from a bone stock, bright yellow Gallardo with 12,000 miles on the odometer to a show-stopping, twin-turbocharged, prim and proper wide body exotic sounds like it could take years, but the experienced team at Optimus Performance helped Wasko streamline the process in order to get his car into SEMA 2016. In just three months, long before the Fast & Furious movie hit the big screen, the car became one of SEMA’s most talked about rides, positioned just outside the Las Vegas Convention Center’s main lobby entrance. Allen Wasko is truly living the dream. 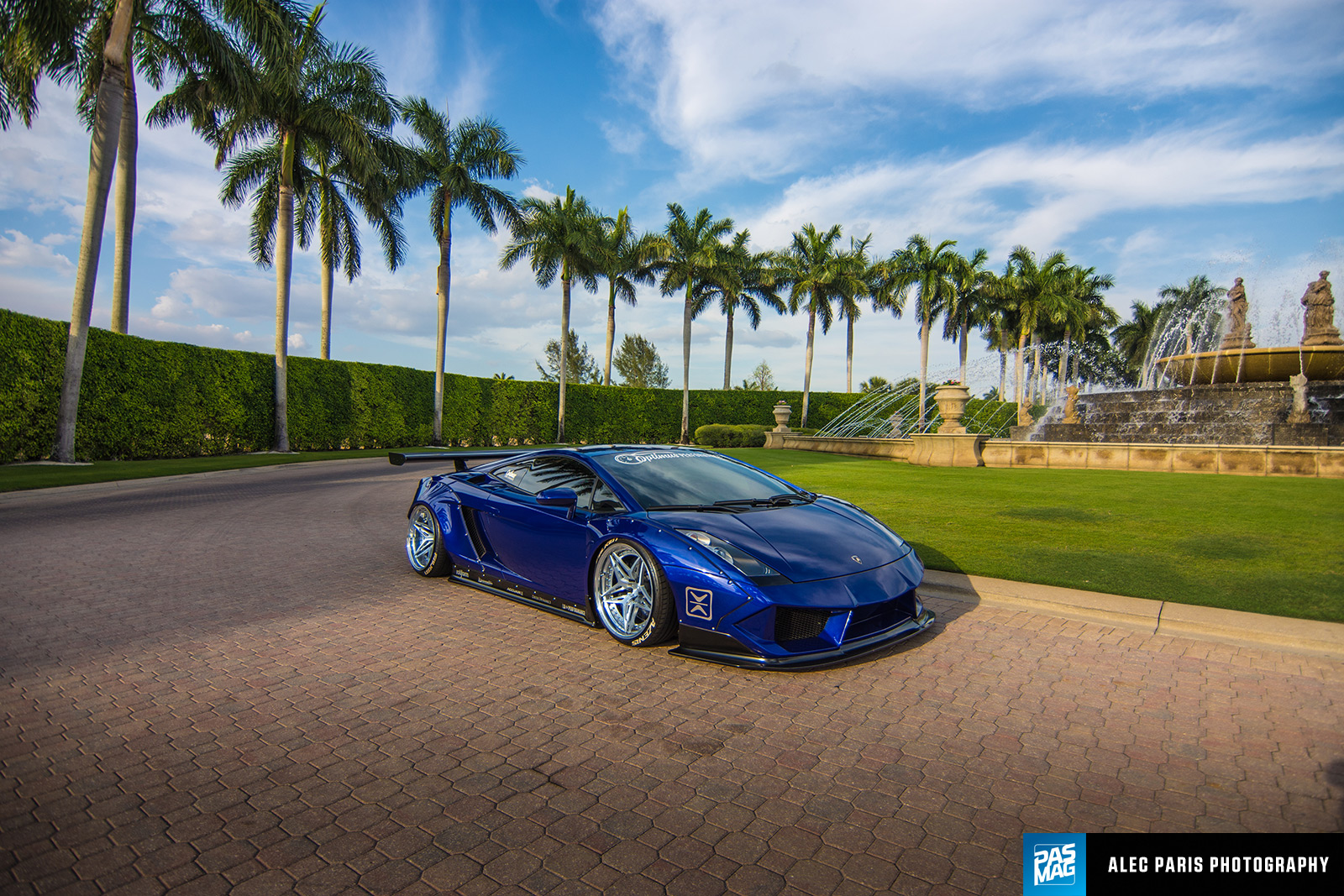