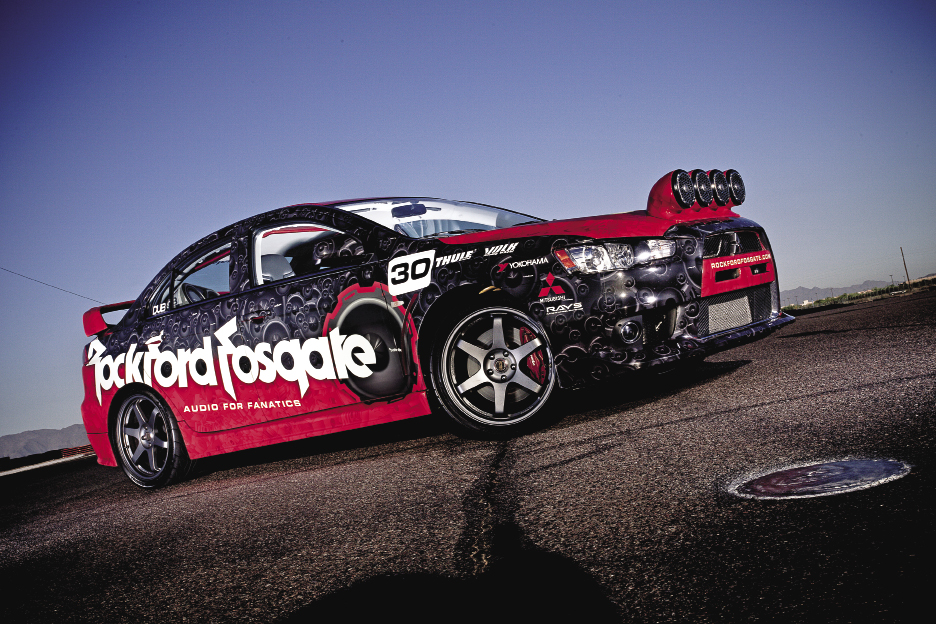 The trend towards serious audio installs straight off the dealer floor is exploding. Everything down to your basic econobox has all of the 12V gear today’s consumer wants. Some sub-$30K cars come standard with navigation, Bluetooth, backup cams, music kegs, satellite radio and mega-Watt systems ready to rock some eardrums.

To deepen the relationship, Mitsubishi asked Rockford Fosgate to build demo cars and tour them all over the country. The Evo X we have here is the third Mitsubishi they have collaborated on. The first endeavor was the Eclipse followed by the outrageous LOUDlander based on the Mitsubishi Outlander. The LOUDlander featured six 15-inch Punch subwoofers and over 5KW of amplification!

How would the new Evo X build stack up to the legends of sound? Well, the team at Rockford Fosgate assured us everything would be more than fine, and the focus would start on the exterior. The shell of the car was wrapped in a full vinyl wrap by Blue Media. The wheels were switched out in favor of Volk Racing TE37 19-inch alloys cloaked with 265/35R18 Yokohama ADVAN Neova AD08 tires. 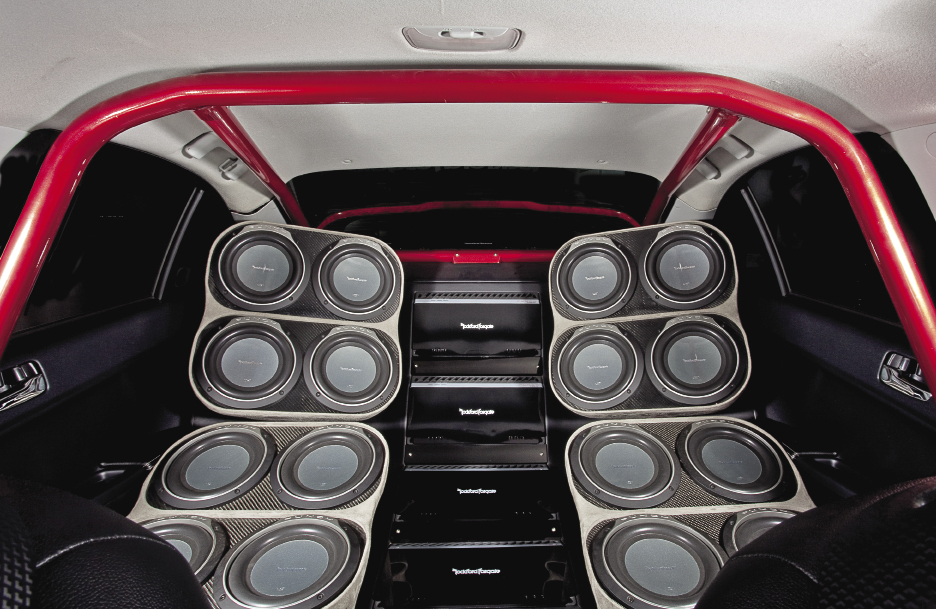 Inside the cabin, the stage was set for a stunning audio install. The entire interior was stripped and everything was Dynamat’ed. The door panels were highly modified and reupholstered to accommodate all of the new audio gear. A custom color-matched cage was added to build upon the rally theme, but also to provide structure for all of the Rockford Fosgate equipment. The rear seat never made it back, but was instead replaced with an elaborate cascading enclosure wrapped in rich grey suede.

It was time for Rockford to do what they do best and roll out the big guns for a memorable sound experience. Up front is the factory Rockford Fosgate double DIN, Nav and DVD unit to handle all of the A/V duties. But the OEM headunit doesn’t have the processing power needed to fine tune the system, so that is where the Rockford Fosgate 3.Sixty.2 processor comes in to play. The mids and highs head to a trio of Rockford Fosgate Punch P500.2 2-channel amps, which feed four sets of Rockford Fosgate Punch P1652-S components. The woofer components have been sunk into the door panels in a mixture of suede and exposed roll bar. The tweeters have been stacked up front and mounted into the dash to hit crisp, bright highs right in front of the occupants. 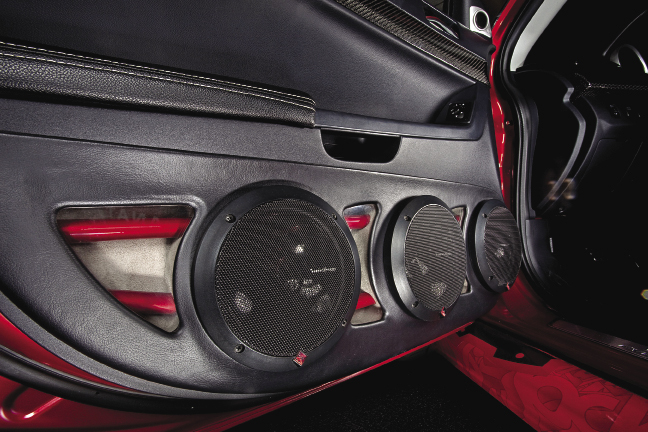 The rear section of the vehicle has been completely reinvented. With a fiberglass and steel structure, the army of amps curves gently in an arc. The aforementioned P500.2s are joined by four Punch Mono P1000.1bd sub amps. The row of amps is flanked by a total of 16 Rockford Fosgate Punch 8-inch P2D28 subwoofers. With enough sound pressure to cause structural damage, there is one more trick from the Rockford crew.

The front hood has been fitted with what appear to be off-road rally lamps. Well… they aren’t, because upon closer inspection, they are actually four Rockford Fosgate 6.5-inch marine speakers! They are perfectly fine for harsh outdoor conditions and proof that Rockford Fosgate can bring the pain from outside the car too! This car was built to deliver its message loud and clear. So if you hear this thing tearing down the road with the hood-mounted speakers crankin’ out loud, you’d better get out of its way. 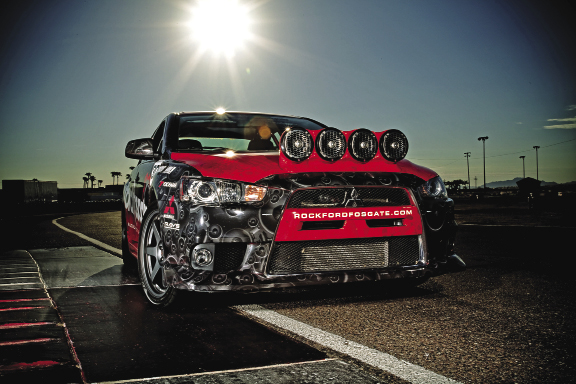 PASMAG's Tuning 365 - Episode 16
In this episode of Tuning365, Adam Gordon and Randi Bentia feature our conversation and shop tour with Chelsie Lesnoski and...

PASMAG's Tuning 365: Episode 7
In this episode of Tuning365, Adam Gordon and Randi Bentia chat with Josh Croll of Croll's Customs, get a build breakdown from Dan Favalaro...