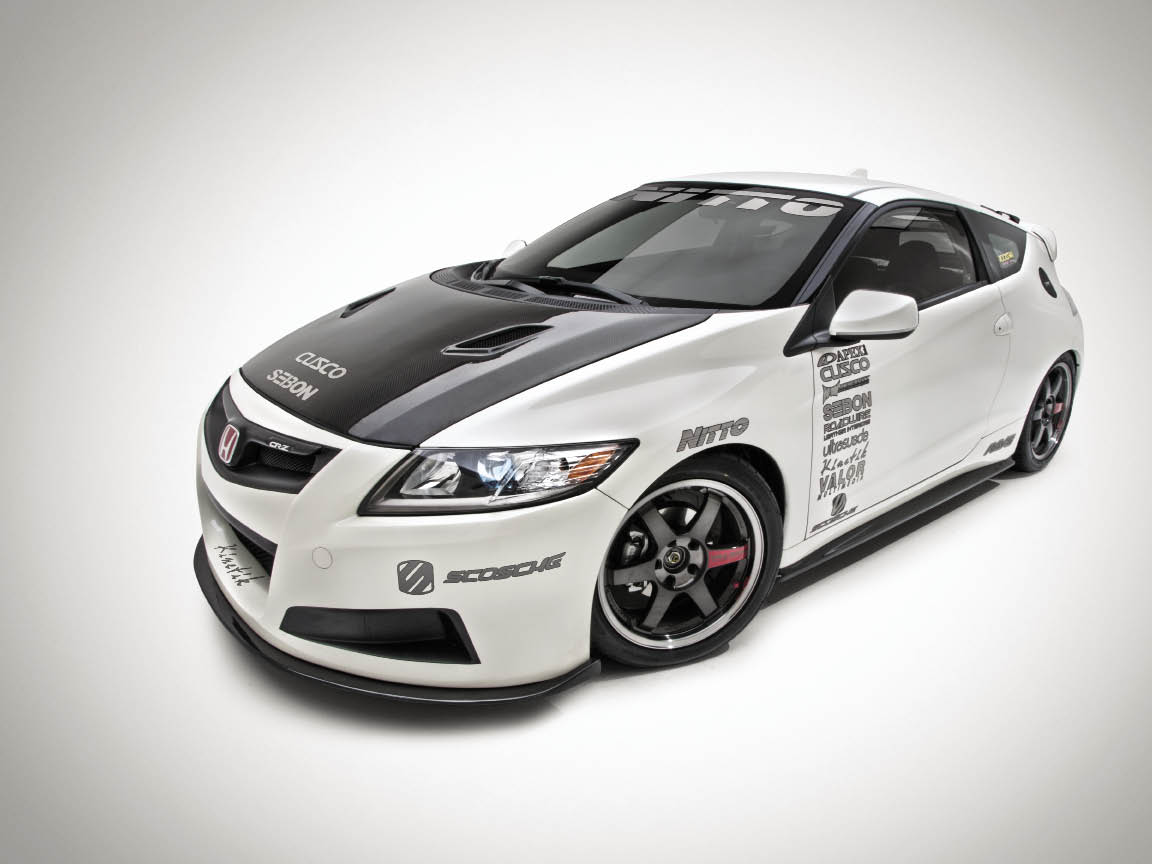 We knew it was coming, we just didn’t know when. We’re talking about the energy crisis and with the recent natural disasters in Japan, it has become even more serious than before. It is fitting that Japan is leading the charge in Hybrid technology and the CR-Z basically defined a class – the Sport Hybrid. Sure, we had tested some great Hybrids up until now but nothing could really be considered “sporty”. Honda basically defined the Sport Compact generation with the Civic, the CR-X and the Integra, and they are about to repeat history.

If Tokyo Auto Salon was any indicator of where the tuning world is headed, then Hybrids will be popping up at your local meets. The show floor was crammed with CR-Zs, Priuses and anything else that integrates Hybrid technology. While Japanese fuel is some of the most expensive in the world, Canada is chasing them down and the US isn’t looking much better. Now that the CR-Z offers less of a performance sacrifice, we are ready to start welcoming them into the tuner world. 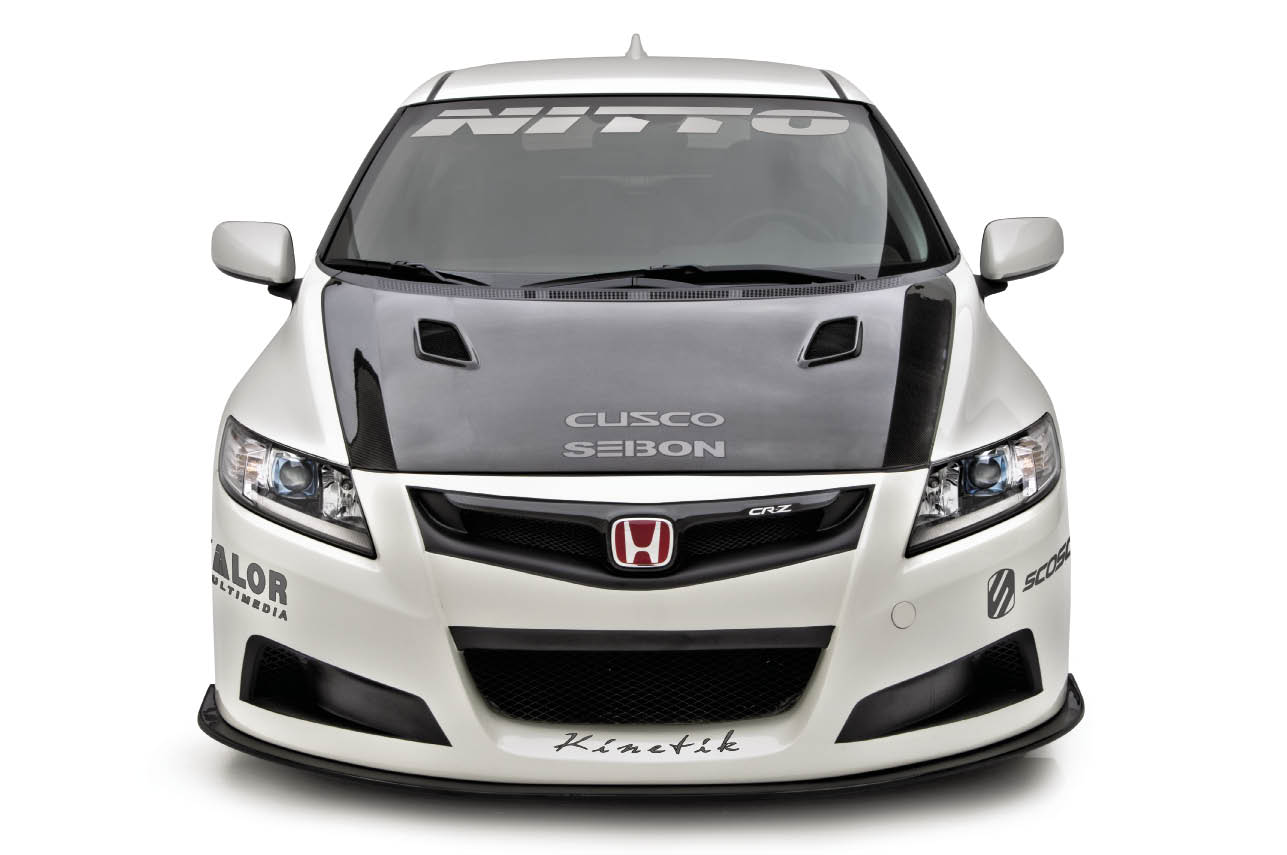 Hybrid tuning is all about aero and weight savings. You might recall Norris Prayoonto using a Honda Insight chassis for his All Motor drag car because it had both of those qualities. So today, companies like Seibon are realizing, Hybrid enthusiasts will want to shave off weight. Of course, carbon fiber is the place to start and Seibon fabricated several products for the SEMA build in no time.

The exterior of this CR-Z boasts everything from the Seibon catalog, and the truth is, they are far from done. We wanted to ink the car prior to its debut on the cover because we know most builds are never really done. The factory hood was removed in favor of a Seibon MG-style netting 15-pounds of weight savings over the stock unit. The rear hatch is in development and will shave off almost double that amount. The Seibon TM style front bumper replaces the stock urethane unit allowing for weight savings and improved aero. Flanking the car are two Seibon TM-style sideskirts to alter the appearance of the profile. In the back, Seibon rear diffusers were added to regulate airflow around the car. Sitting atop the stock hatch (for now) is a Seibon TM style trunk spoiler which improves aerodynamics and is very lightweight. The exterior was capped off with vinyl graphics for the sponsors and brought to a shine with Mother’s car care products. 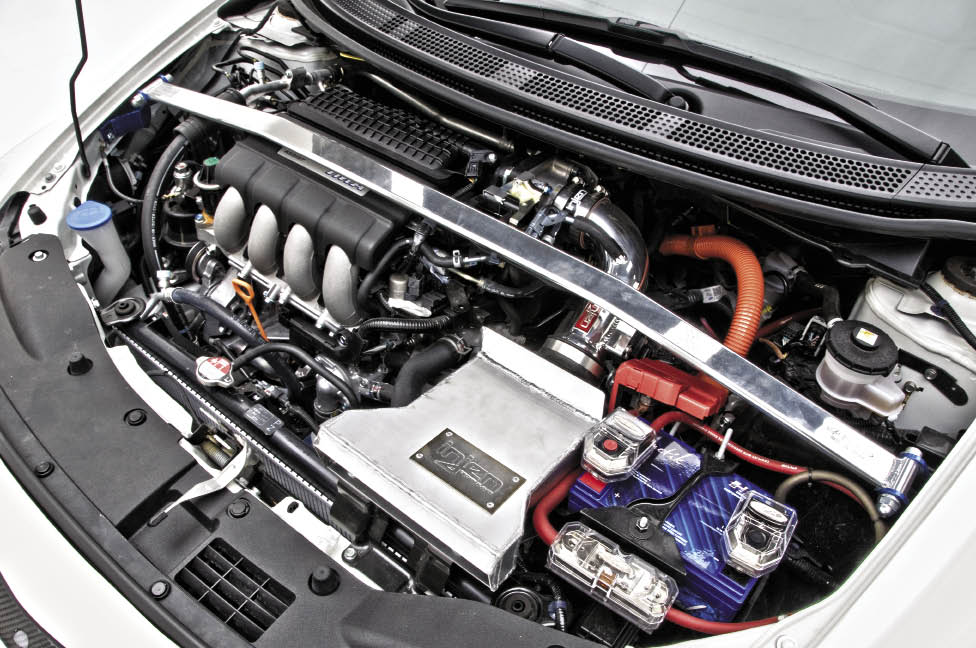 As Seibon co-owner Mikey Lee pointed out, Seibon wanted to build more than an exterior prototype and improved upon every aspect of the CR-Z. The suspension received a boost with a set of adjustable Cusco Zero-1 coilovers. With adjustable dampening set to stiff and perches slammed to the bottom, the handling was dramatically improved. From there they added front and rear Cusco swaybars to tighten up the roll when storming into corners. Cusco strut tower bars add that torsional rigidity to the chassis by tying the towers together. Finally, a Cusco X-brace underneath cinches it all up for a snappier response in the corners. 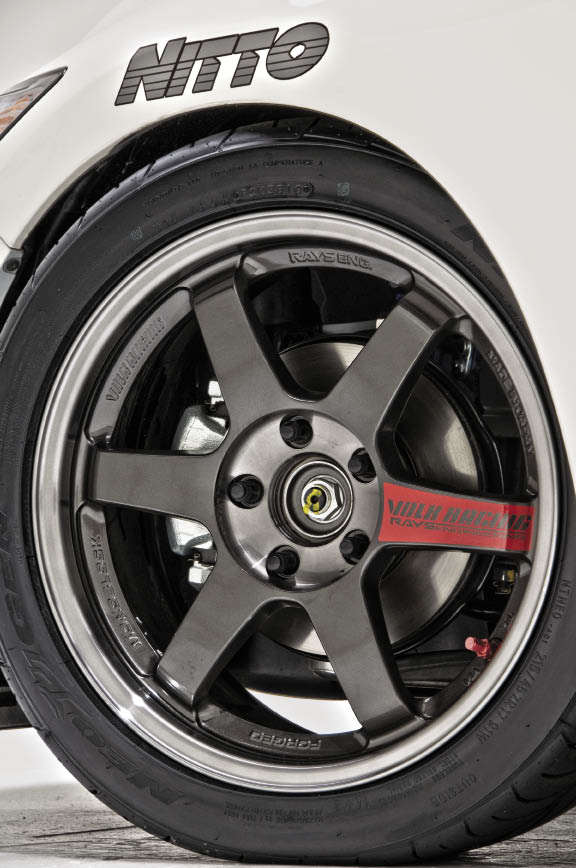 We all know that even with an entire suspension catalog installed, the handling would simply not be there with bad tires. To add the finishing touches, Seibon selected a set of their exclusive Rays TE37SL forged alloys in 17x7.5-inch all around. The trademark gunmetal wheels are offset by the red script and are totally unmistakable for anything else out there. Nitto Tire stepped up to the plate with a set of NT-05 tires. These stickies have a UTQG of 200-AA-A and have proved themselves to us through dozens of laps on the track, so we definitely approve. 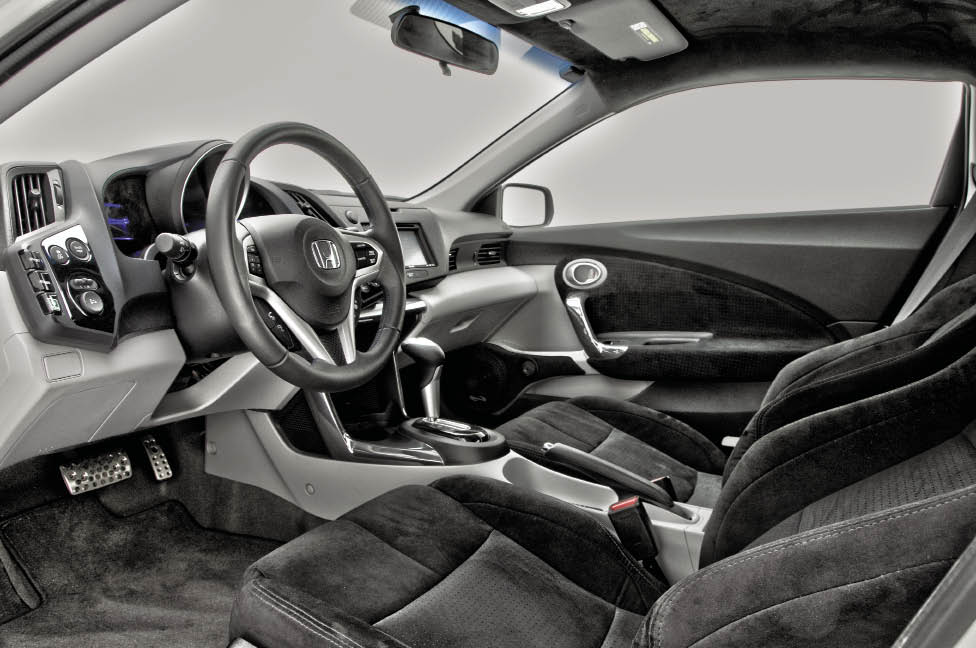 The CR-Z was then taken to Roadwire in SoCal for a full upholstery job. They removed most of the interior and started re-skinning everything in black Ultrasuede. Work then commenced on the audio install. 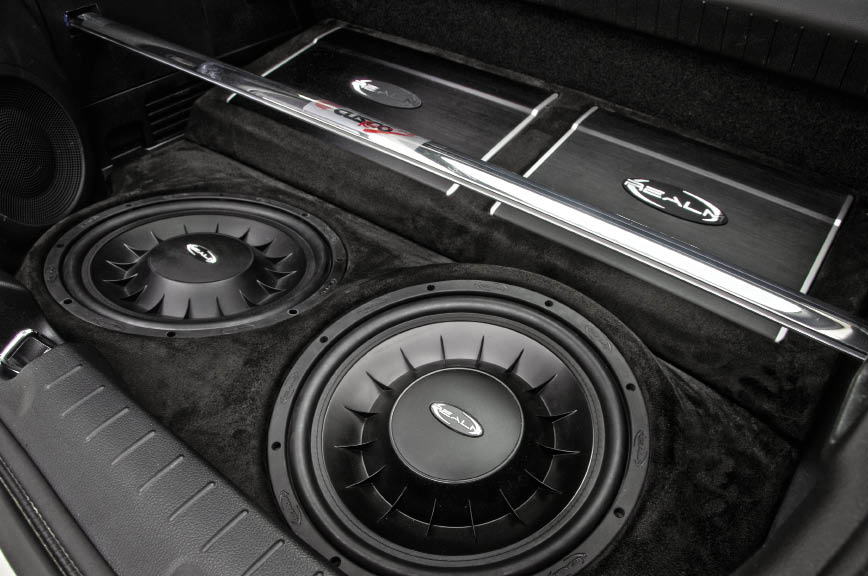 Seibon turned to Scosche and Realm for the aural entertainment gear. A pair of Realm amplifiers provides the electrons to get the speakers moving – a Realm D1100.1 monoblock capable of producing 1100 Watts fires up a pair of LFT12D4F shallow mount subwoofers that fire upwards from the rear of the hatch area in a fiberglass topped enclosure. A 4-channel A600.4 puts the power to two sets of Scosche LS6c components to round out the sound. The front component set found a home black suede wrapped panels that cover the factory speaker location – and makes it look much better. 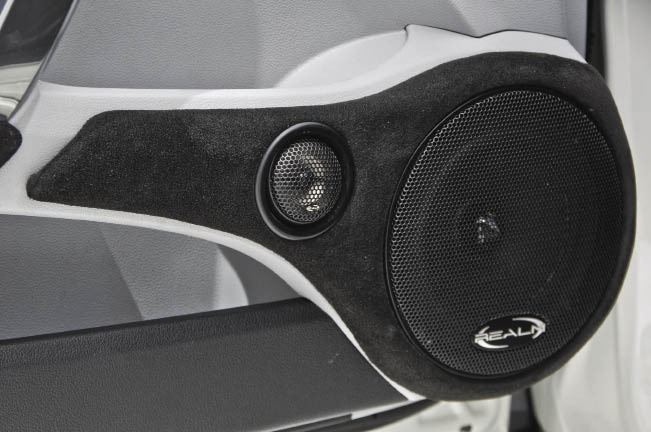 Everything was wired up with Scosche EFX series power cables, including a front-to-back run of 0Awg into a Delta-series distribution block. The subwoofer enclosure and amp rack is wrapped in the same black suede material in keeping with the theme for the install. Heading up the audio system in a Valor DDN-868W double DIN that was installed in a one-off prototype dash kit that was provided by Scosche. Vibrations from the body panels are kept in check thanks to the installation of several layers of Accumat Hyperflex sound deadening. 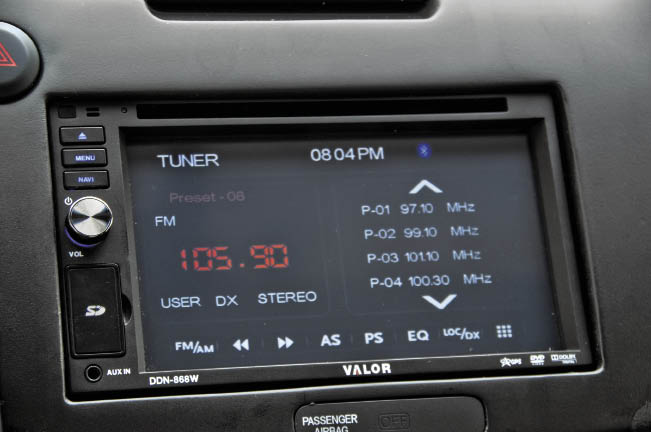 The end result is a CR-Z that we could envision flogging on city streets. Sure, SEMA 2010 had many custom CR-Zs to offer and Tokyo Auto Salon even more but the Seibon CR-Z definitely had the total package. Plus, this is the prototype car on which its entire CR-Z program will be built, so we can certainly see history in the making right before our eyes.