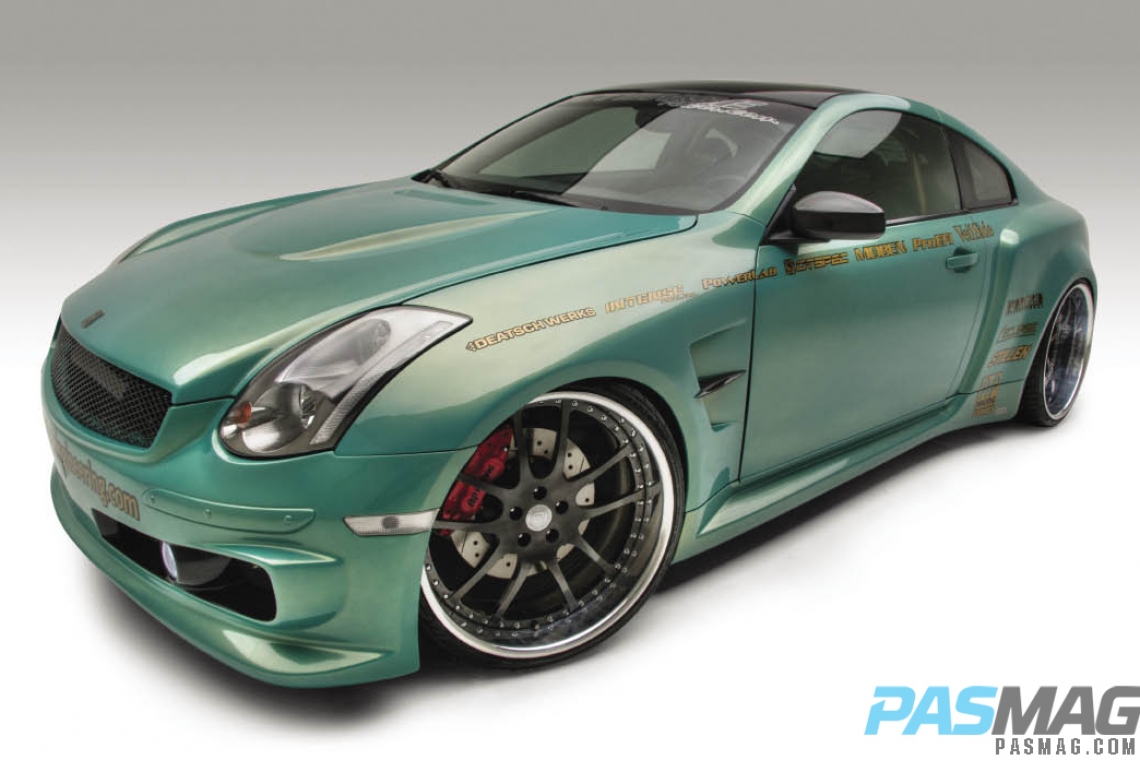 Well the Olympics are wrapped up, the medals up on the mantles and the scandals ongoing. The Bejing display was full of controversy and who doesn’t crave a bit of that out of international competition. From the lighting of the flame, the accusations started flying about ringers singing at the intros and competitors lying about their age. The games wrapped up with a Cuban Judo gold medallist flipping out after a disqualification and side-kicking the ref in the head. Now that is sportsmanship. But the athlete that received the most attention also appeared to be criticized the most simply for letting his emotions get the better of him.

Unless you have fallen off the grid, then you know I’m referring to Jamaican bullet, Usain Bolt. Here is a hulking man of 6’5” who decimated two records during the Bejing games. Not only did he murk the competitors in the 200m, pickup the slack in the 400m relay but his performance in the 100m was pure ownage. If you’ve seen the video, Bolt lets up at what appears 75m through the race to spread his arms to the crowd as if to say “whatchu gonna do to touch this?” The media and Olympic officials went berserk at his distain for the rest of the pack. Personally, I thought it was gangster and only proved that, he could have laid down a record that would not be touched for decades. But when you are on top, why not? 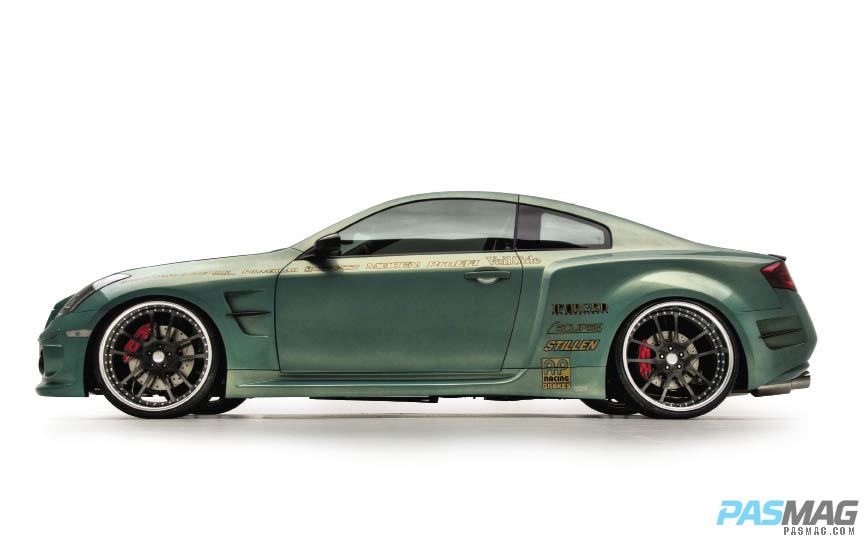 Han Wong out of Chandler, AZ is presently on top of his chosen game. And unlike Bolt has chosen to be very modest about what he has accomplished here. And it is not without monumental effort because here is one tuner that is impossible to get a hold of under the workload. We chased this car for months, throwing all kinds of sponsorships at Wong to keep him interested and keep him focused on the prize – the cover of PAS.

And why it was selected as a cover should need no explanation but what the hell we’ll drop some stats anyway. It was an 18 month process to build it, the project was over $100,000 in addition to the vehicle price and it makes well over 1000hp at the crank. So lets get into how Wong did it. 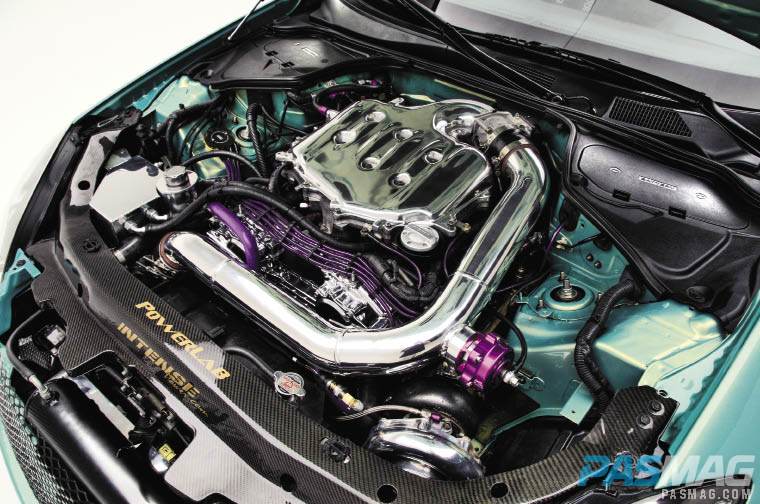 Beginning with a 3.5L VQ engine, Wong and his team at Intense Power in Gilbert, AZ began prototype engine internals. The block was balanced and blueprinted and machined to exacting specifications. Intense designed forged pistons and ultra strong billet connecting rods. As a testament to Nissan engineering, Intense is using the stock crank, simply treated for strength. The VQ heads have been ported and polished by Intense and filled with Brian Crower Stage II cams and a full Ferrea valvetrain. The assembly was clamped back down with metal head gaskets and ARP fasteners. Fuel comes delivered by twin Powerlab 255lph pumps filling Powerlab rails. The juice is closely regulated by an Aeromotive FPR and distributed by six Deatchwerks 1600cc injectors. Air is sucked in through a custom Intense power intake and compressed with a massive Powerlab 76S Extreme turbo. This single snail is part of Powerlab’s kit and is connected to their network of piping and a 4-inch thick front mount intercooler. As the air reaches the stock plenum, it gets a boost in velocity thanks to a Powerlab 3/8-inch aluminum spacer. No fancy sheet metal intakes here, there was actually more stock gear onboard than we expected, including the OEM coils! The exhaust is managed with a TiAL 44mm wastegate and flows into an Intense PowerMax SS 4-inch exhaust. 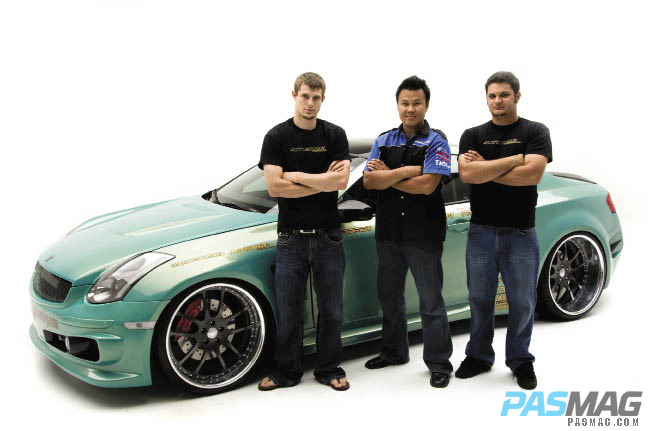 The sum of the parts equals 906whp with 730lb-ft of twist. Enough to snuff out the stock driveshaft and LSD, well you would think but they are still stock and still hanging tough. The clutch and axles however are a different animals as the clutch has been replaced with a Carbonetics triple plate clutch and the axles are Driveshaft Shop Pro Series. And the car lays down the smack since, with the smaller GT37 from the last setup it ran 11-flat and had a best trap of 139mph. It is expected to deep into the 10s possibly the 9s as it sits.

As you can see, this project is far from a purpose build drag car. It was actually constructed to bag trophies at shows as well. Wong sourced the first VeilSide Fortune kit for the G35 in the US and redesigned the rear spoiler in carbon fiber to set it apart any other G. Intense Power technician George Husar put the shell together and they had it 3-stage sprayed in a custom hue called Intense Money Green. The graphics by Xsell Media were slapped on and then added tweaks like JDM clears and VIP sill lighting. The overall impact is one that stops shows. 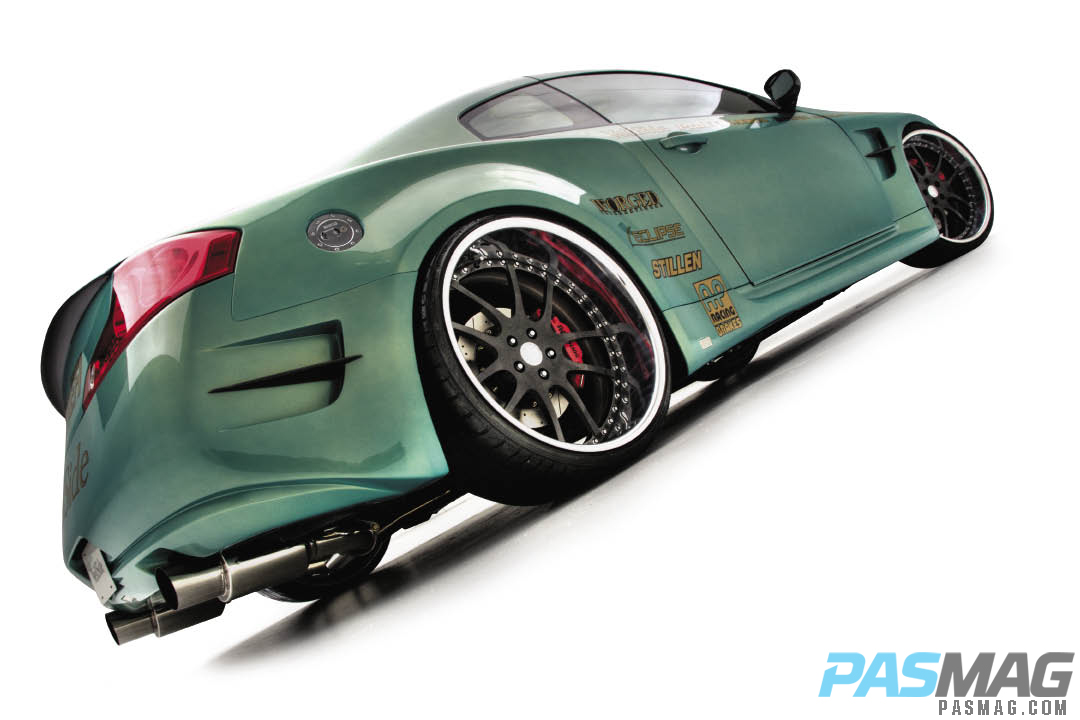 The rare body kit required some rare landing gear. And Wong talked to the crew over at iForged to build something no one else had … or will have. And iForged delivered by shipping over some Vision Anthracite 22-inch wheels, 9.5-inch up front and 11-inches in the backyard. Falken stepped up with some FK452s 245/30R22 for steering and 285/25R22 to lay the beatings down. Behind these sexy spokes are some non-nonsense brakes. Wong wanted to stop with something JGTC-grade and ended up selecting British manufacturer, AP Racing. The slotted and drilled rotors up front are 355mm chomped down on by 6-piston monoblocks, while the rears are a healthy 4-piston / 330mm combo.

The suspension was key to setting the stance and to harness all those ponies. The G was outfitted with Cusco sway bars and Intense Power rear camber arms. The stock dampers and springs also had to be relieved. So Wong slipped in a set of Moben 36-way adjustable coilovers for all of the tweaks needed to enable this car to tap dance around lesser vehicles. 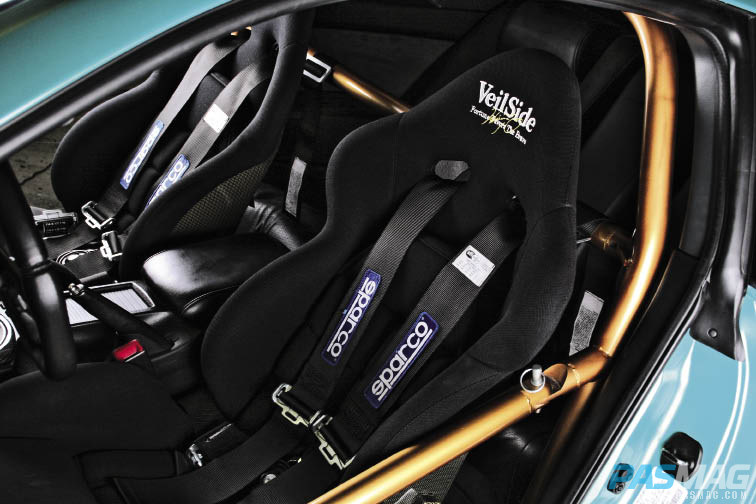 Crack open the door and you won’t find what you might expect in a 9-second car. Wong’s G has a full interior, well more than full if you count the NHRA-spec cage wrapping around it. The G has the only set of VeilSide VSD-1 reclinable racing seats in North America and capped it off with a full custom carbon fiber center dash panel. The door inserts and headliner have been recovered in suede further proving there is a splash of luxury in the mix. The steering wheel and shift knob have both been replaced with a VeilSide product and Sparco 5-points strap in occupants. All of the vitals are displayed with Defi BF: boost, fuel pressure, oil pressure along with an AEM wideband monitoring AFR values. 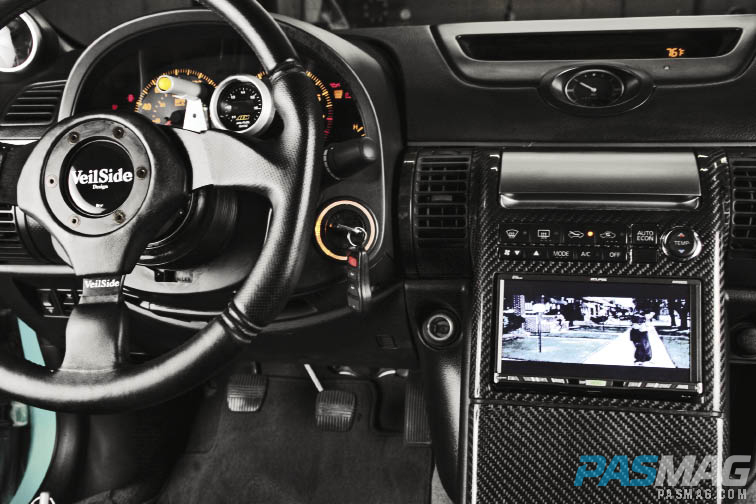 The audio and multimedia assault came courtesy of Eclipse. When we heard about the project we demanded Eclipse marketing staff get onboard because it was going to storm the scene. They sponsored an Eclipse AVN6620 double DIN DVD/Nav unit to output the sound. The mids are amplified by twin XA4000.4 amps feeding SC6500 6.5-inch components and 6.5-inchers in the trunk lid. 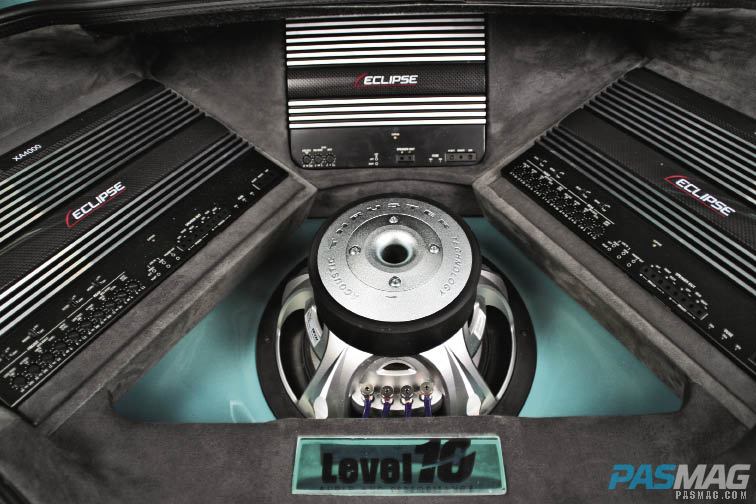 The low hard-hitting notes fed into a XA1000 mono and a single SW7200 12-inch sub in the trunk. Eclipse loaded up the extras including: side-view camera, back-up camera, iPod adapter, Bluetooth adapter and a Sirius satellite radio module.

Wong’s G was destined for a cover and deserved to be sniped by PAS to introduce it to the tuning world. As the former builder of the renowned BRS widebody RX-7 and an RB26-powered S14 sporting a fat widebody, Wong has definitely upped the level by which other G35s will be compared to, so if you catch him showboating just like my man Usain Bolt– he definitely earned it. 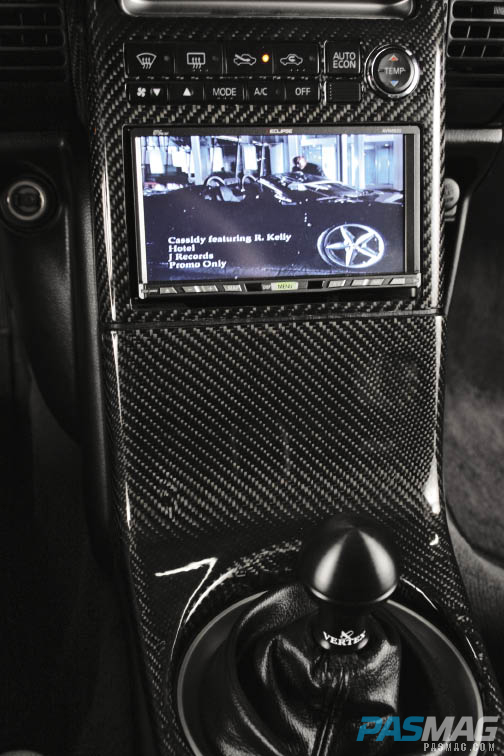 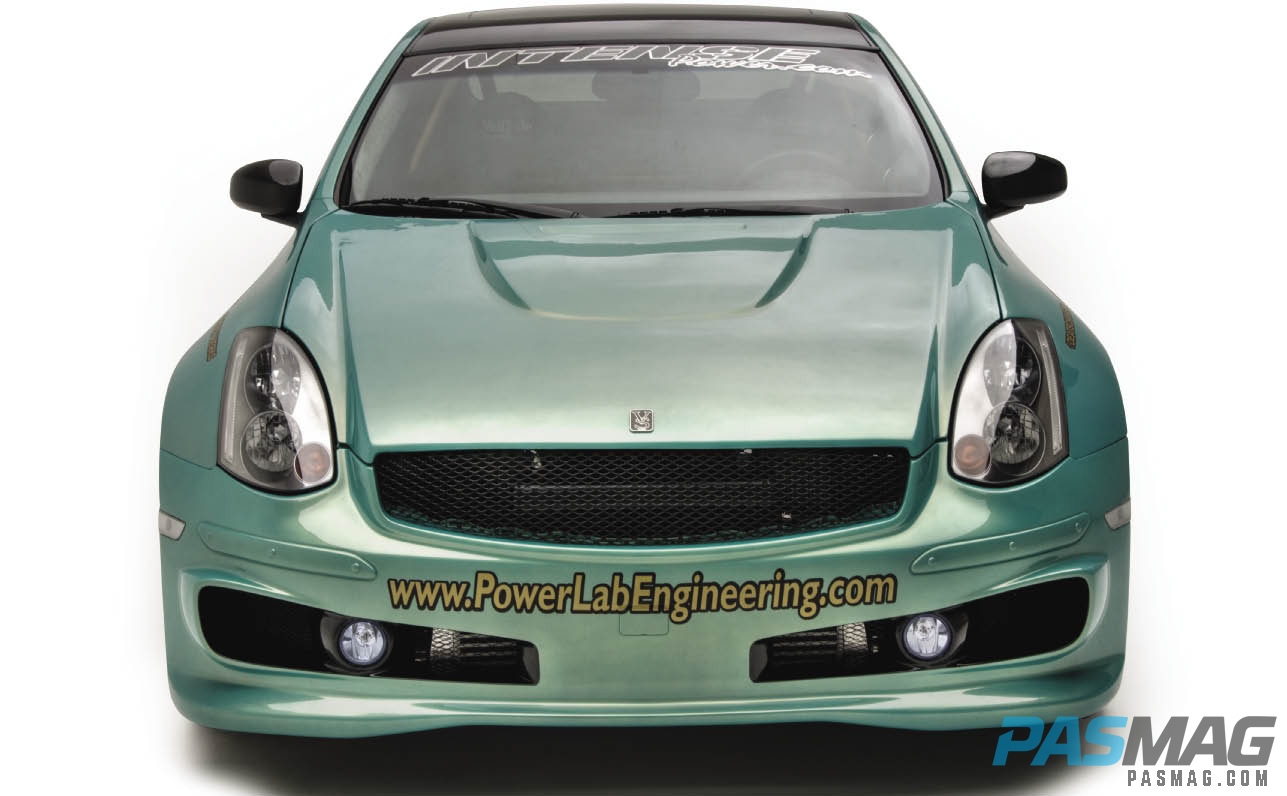 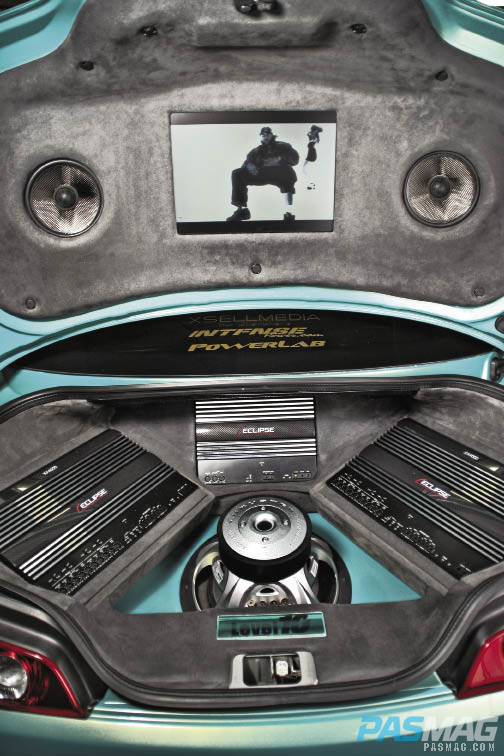 Drift Ride Along in the SEMA 2022 Bronze Lot: OPTIMA Batteries
Hot New Products: AGM H5 size batteries for European sports cars + Lithium battery line. We got a breakdown of what OPTIMA Batteries was doing with...

Editor's Top 10 SEMA 2022 Builds
Continuing a long-standing SEMA tradition of ours, PASMAG Editor Adam Gordon (AKA Gordon Leadfoot) took to the floors of SEMA 2022 to pick his 10...