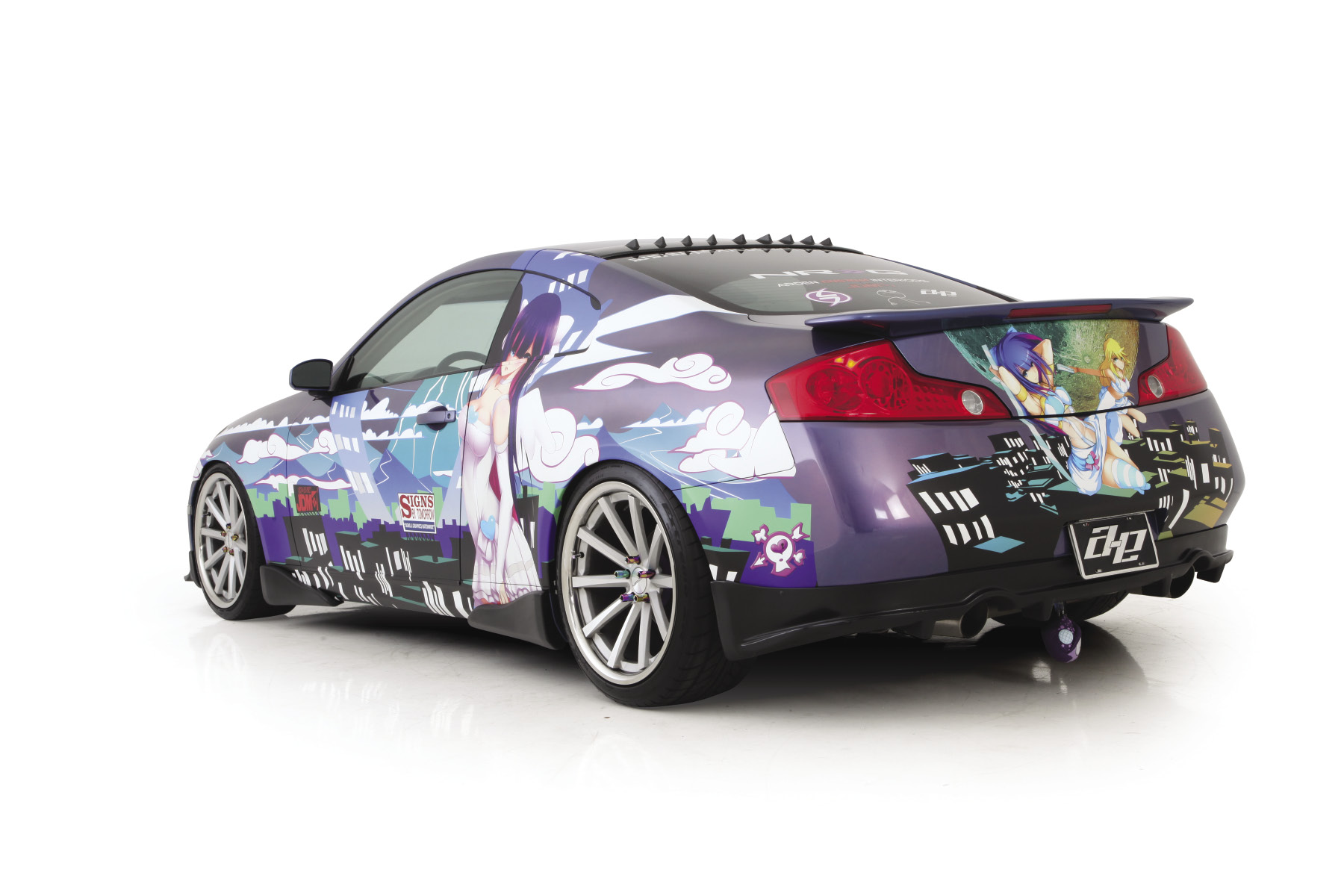 After spending a couple days working the floor of the Las Vegas Convention Center during the 2012 CES Show, it's time to get out and see what some of the manufacturers that are off-site have to offer. This brings me to the Palms Hotel, inside the Rockford Fosgate booth where Lighting Audio is showing off this bad-ass Infiniti G35 coupe. I have always liked the G35. So, I know instantly that someone has poured their heart and soul into it.

This 2003 G35 is Jazel Gonzalez's second sport compact creation. Starting what could be called a side career on a ’96 Civic several years ago, the Infiniti has served as the great next step for the Sacramento, Calif. resident. 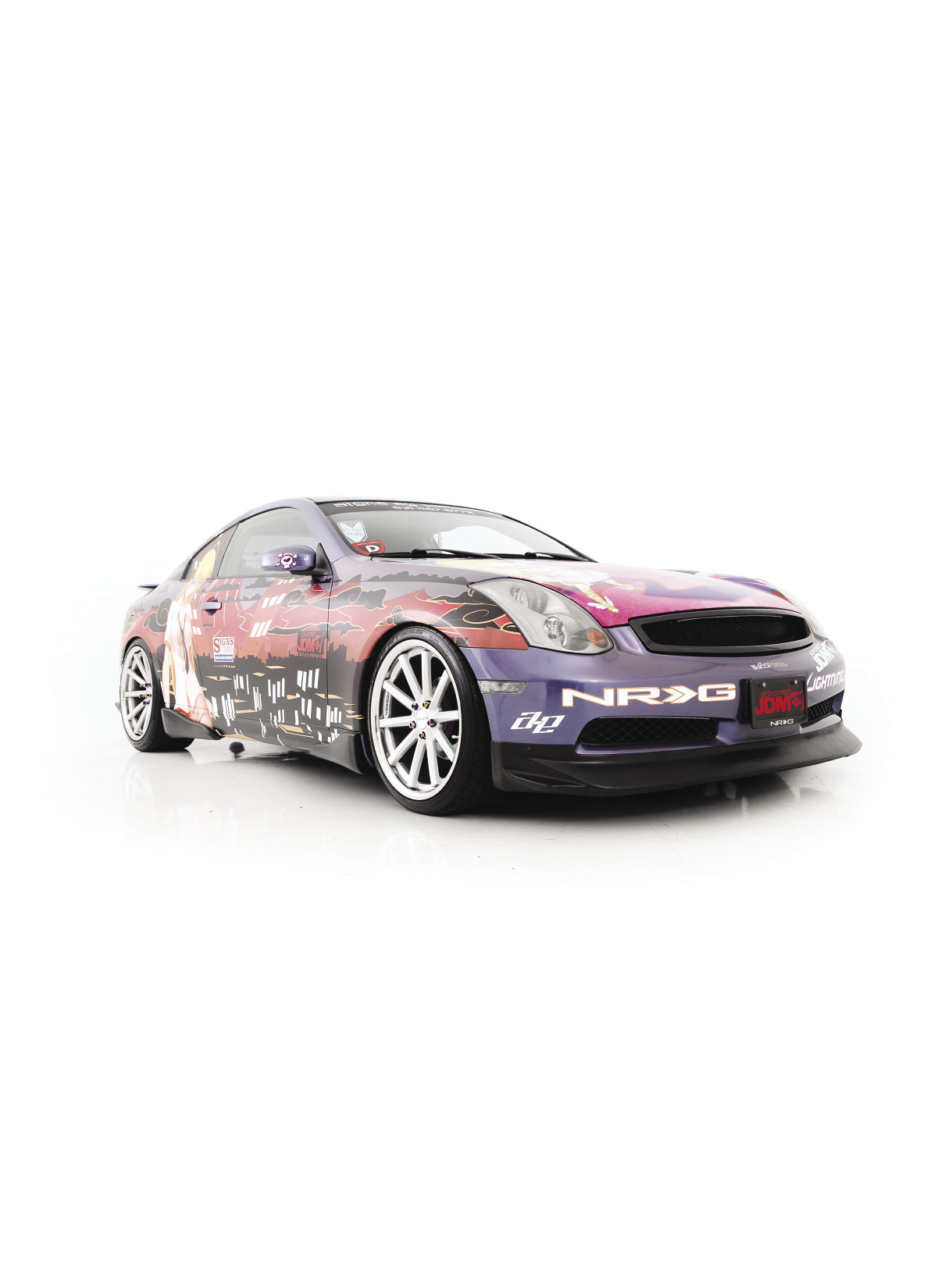 As you can tell, it has been serving him well, but the car has only come together this way after a chance encounter with a guy driving a car vinyl-wrapped to look like a A-10 Thunderbolt fighter aircraft. After pulling into the parking lot of the movie rental store he was working at the time, Gonzales struck up a conversation with the owner of the Hog-wrapped car, Steve Crain.

Crain also owns a nearby sign shop called Signs by Tomorrow and it's this seemingly innocuous detail that inspired Gonzalez to undertake this project. And, being a bit of manga buff himself, Itasha – the art of applying Japanese anime to a vehicle – became his obsession. This focus combined with some VIP design elements, lots of cool gadgetry and a clean overall look has resulted in a car that looks like it came straight from the Forza Motorsport video game.

The body of the G is enhanced with a ViS Racing Invader 2 lip kit and Techno R carbon grill. A D5 Concepts roof vortex generator and OEM rear spoiler add some dimension to the otherwise smooth body of the G35. It's important to note the car is not completely wrapped in vinyl, but rather has eight coats of meticulously-applied paint for the base. This includes two coats of OEM Caribbean Blue, two House of Kolor Pearl Red coats and four clear coats that yield a rich background for the vinyl.

With the body painted and wrapped, Gonzalez added some JDM side marker lights and Extreme Lighting LED lights in the front grill, bumper, license plate as well as in the rear undercarriage. The G35 rolls on 20-inch Vossen VVS CV1 wheels with Nitto 555 Extreme ZR rubber, both of which benefit from Tein S-Tech lowering springs and a NRG front strut brace.

Entering the cabin reveals a custom paint job on the dash, center console and door handles. A NRG Limited Edition sport steering wheel and quick release hub add some style in front of the driver while the 9k bubble shift knob, white carpet and purple microfiber suede upholstery by Arden Custom Interior brings some VIP flair to the car. This is furthered by the wine bottle and glass display on the center console as well as the white and blue LEDs that illuminate the interior by night.

A two-DIN JDM radio harness provides a home for a Kenwood DNX714 head unit, but the rest of the entertainment system branded Lightning Audio. A trio of amplifiers powers the system – a sole LA 8004 powers the main speakers while a pair of LA-1600MD amps drive the subwoofers. The amps are fed with four-gauge power wire and premium interconnects. Each front door houses a 6.5-inch LA-1652S component set behind a custom lexan grill.

The rear fill is handled by some LA-1694 six- by nine-inch speakers. In the trunk, inside sealed enclosures, are four 12-inch D412 subwoofers. Two fire rearward while the others fire inward.  The amps are flushed-mounted into the floor and the whole installation is wrapped up neatly in black microfiber courtesy of Al and Ed’s Autosound in East Pasadena.

Gonzalez makes good use of his creation. While he loves taking home trophies like the next guy (and, those trophies include best exterior, best vinyl graphics, best in class and the coveted people’s choice award from events like Remix, Extreme Auto Fest and HIN Los Angeles to name a few), he also enjoys contributing to his local community by letting local kids play Xbox 360 Kinect games on the 19-inch Accele widescreen LCD mounted on the inside trunk lid at Cars4Cancer and Project Ride charity events.

While the Itasha concept has garnered a seemingly equal amount of love and hate toward the animated G, Gonzalez chose to embrace these forces and started his own club called Team LoveHATE. Future plans for his car include a widebody kit and engine upgrades by KDM Sport. And, our kudos to Gonzalez for stickin' to his guns. All puns intended.