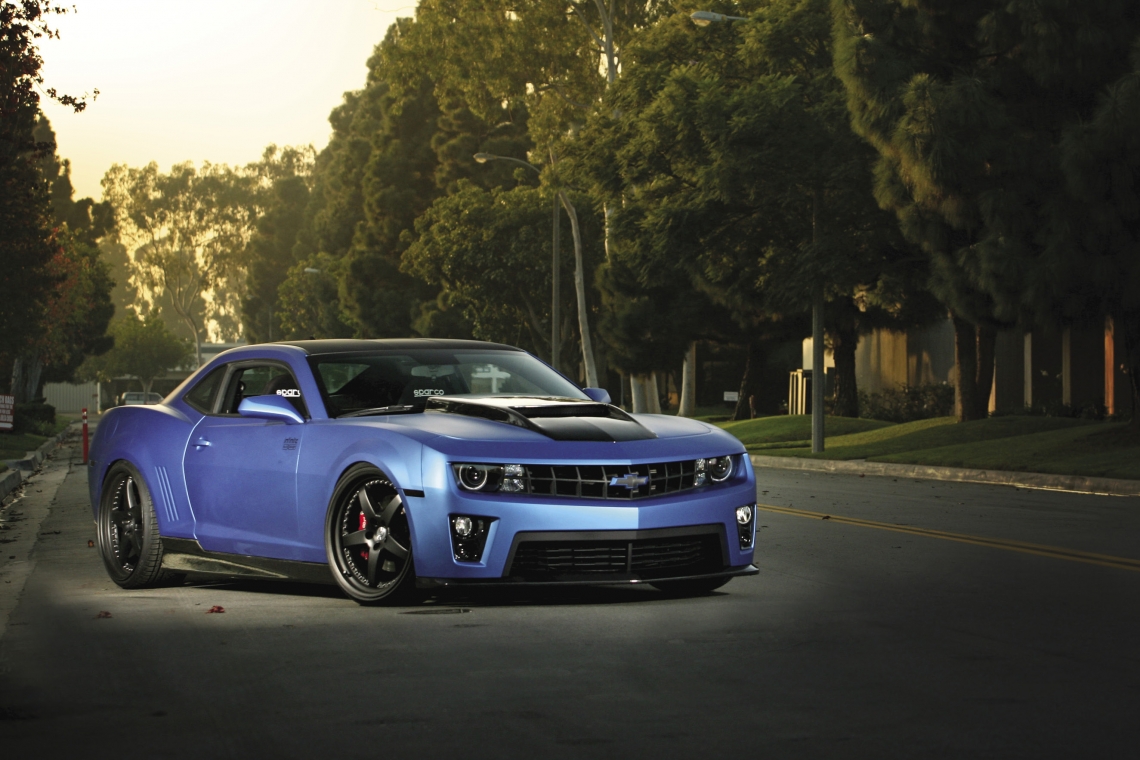 When Gary Shellum first drove his 2011 Chevy Camaro off the dealer lot, the plan was to keep the car mostly stock. After owning a heavily-modified 2005 Dodge Charger, Shellum didn’t want to deal with the hassle of driving a modified car, either from gawkers or law enforcement. First on his mod list were a set of JBA headers and exhaust to help bring out the prowl of the LS3 motor, with custom 22-inch wheels next up. But as most of these stories start, one thing led to another and before he knew it, Shellum had a show-winning monster on his hands. 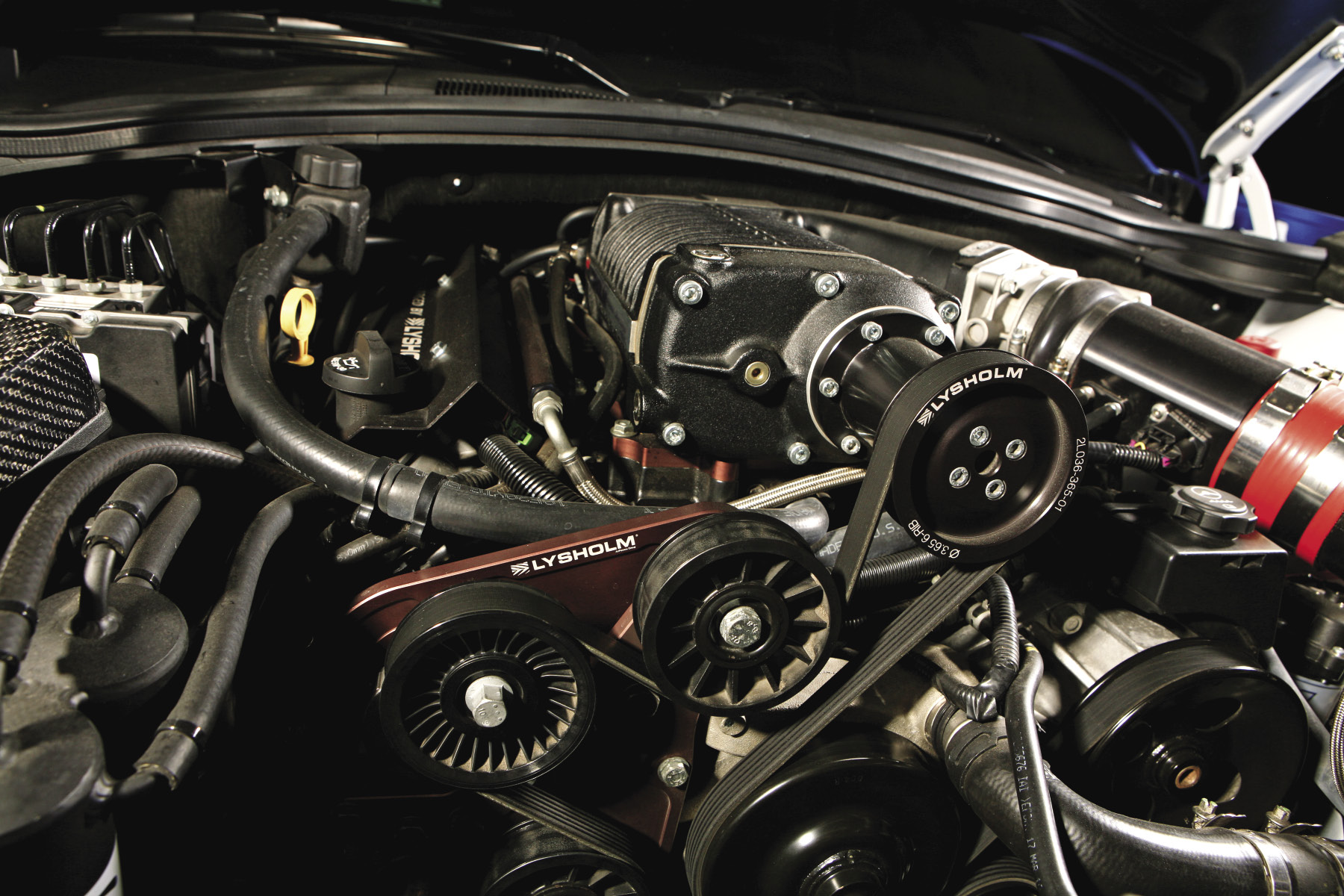 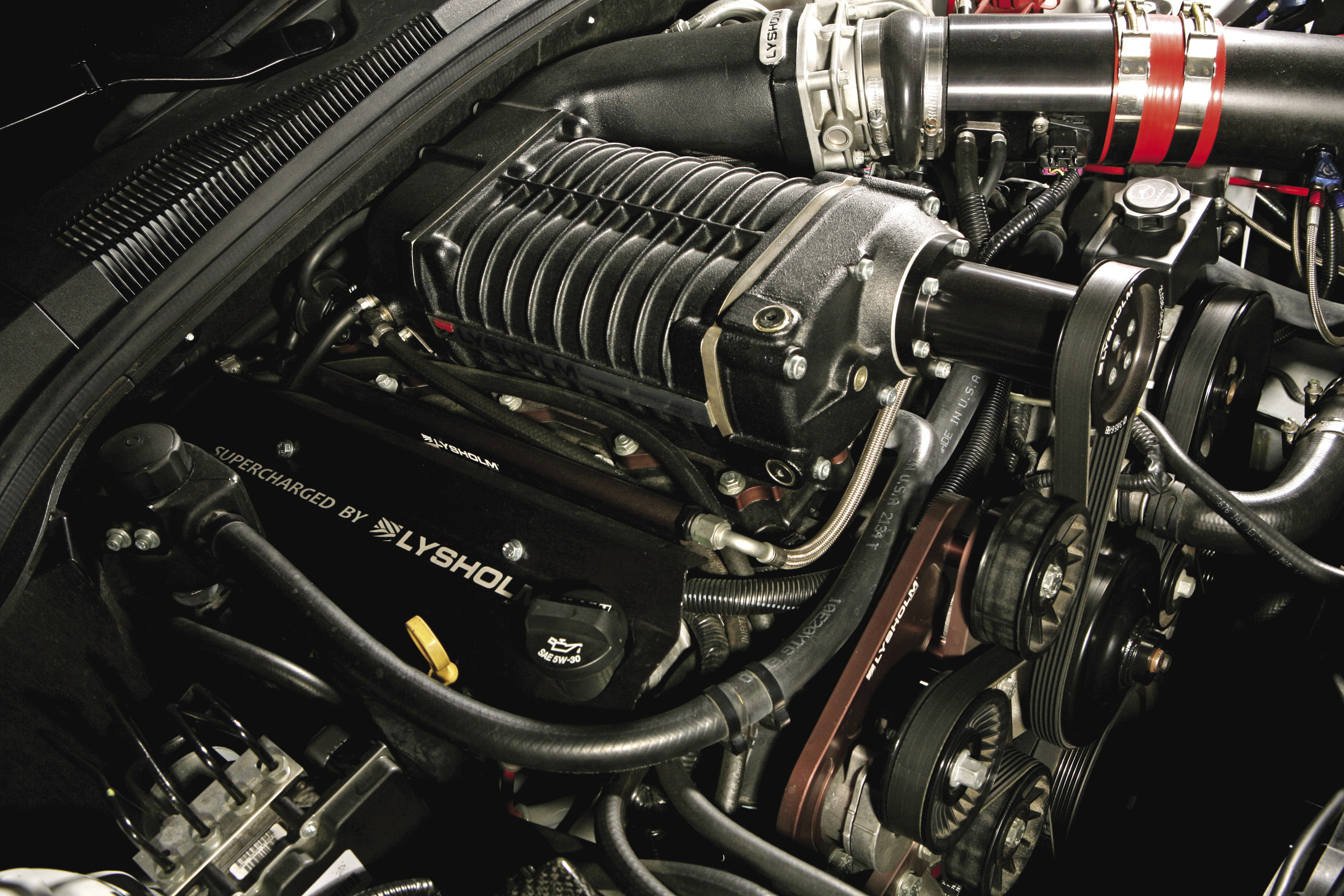 In 2011, Shellum was one of the first to pick up the newest model year Camaro around. Through Brian Garin at Infinite Auto Design, Shellum found out that Air Lift Suspension was looking to bag a Camaro, then take it drifting at a local race track to show the durability and racing qualities of the latest generation of airbag suspension. Shellum offered his ride up for R&D and just a few months later, the car was seen on the track turning some fast lap times. Not too long after that, Shellum connected with Lysholm Superchargers to get their 2.3L twin-screw supercharger added to the LS3 engine. Bumping the horsepower up over the 600 hp threshold gave the car new life. Stopping power was upgraded via Wilwood’s W6A/W4A Camaro Big Brake kit, pairing six-piston front and four-piston rear calipers with 14.25-inch rotors all around to calm the 600+ ponies under the hood. 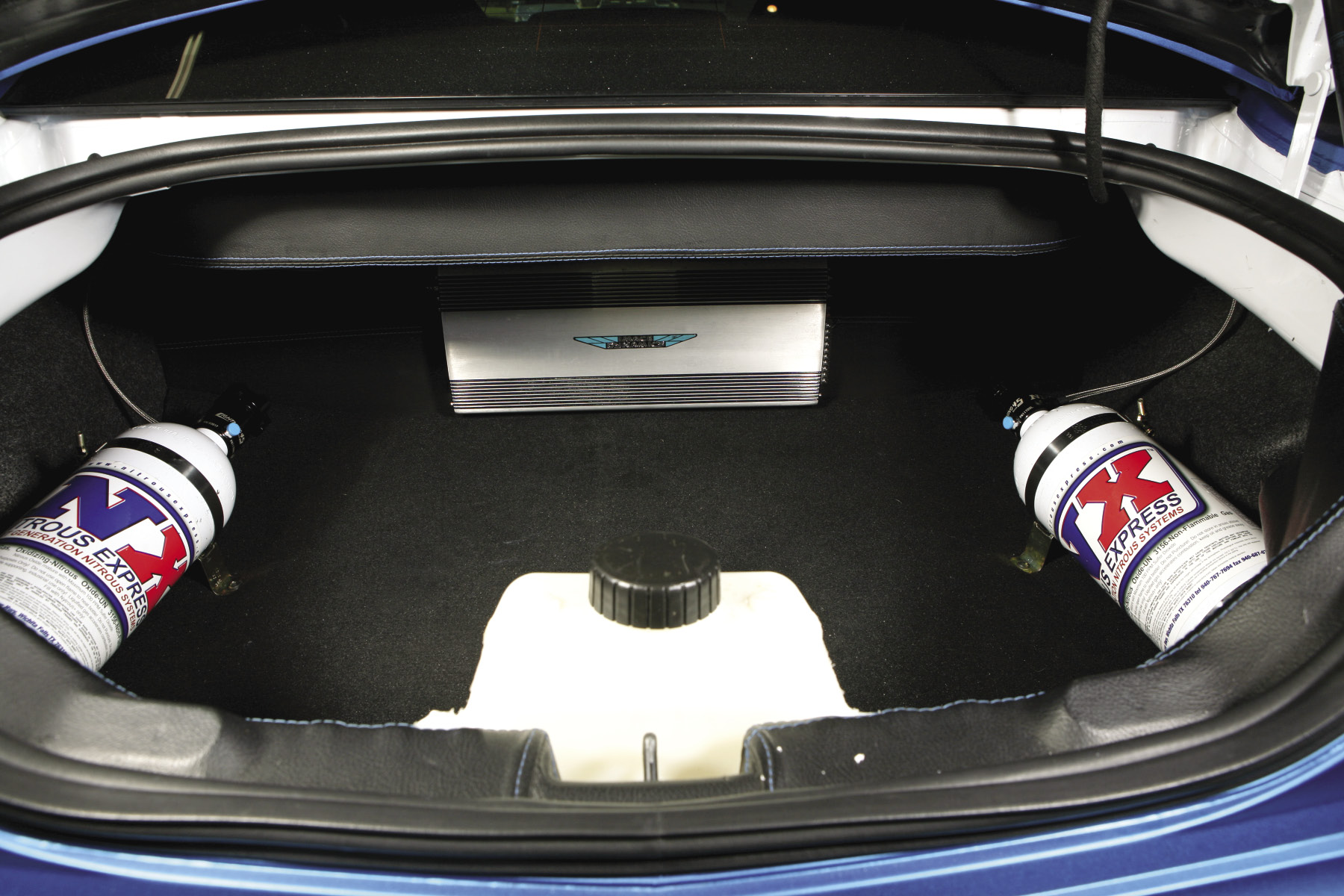 Ramping up to the 2011 SEMA show, Shellum was approached by Wossner Pistons to be the centerpiece of their booth, showcasing their forged pistons. A custom set with a secret dome pattern was thrown into Shellum’s LS3, and the car was tuned on a dyno to upwards of 648 hp and 652 lb-ft of torque. Although the car is currently equipped with a Nitrous Express two-stage wet injection system, the nitrous wasn’t used for the dyno pull. Shellum decided to finish the car with a full audio setup just in time for the SEMA show, replacing the stock speakers with Image Dynamics CSXS65S Chameleon component speakers and adding a pair of IDQ12 12-inch subwoofers in the rear deck. A pair of ID5800 amps power everything, all installed by Garin’s team at Infinite Auto Design in Huntington Beach. Infinite Auto Design also moved the OEM stereo display into the headliner before wrapping everything in suede, and an iPad takes the place of the stereo controls in the center console with a custom integration kit. The car just as loud inside the cabin as outside, turning heads at every corner. 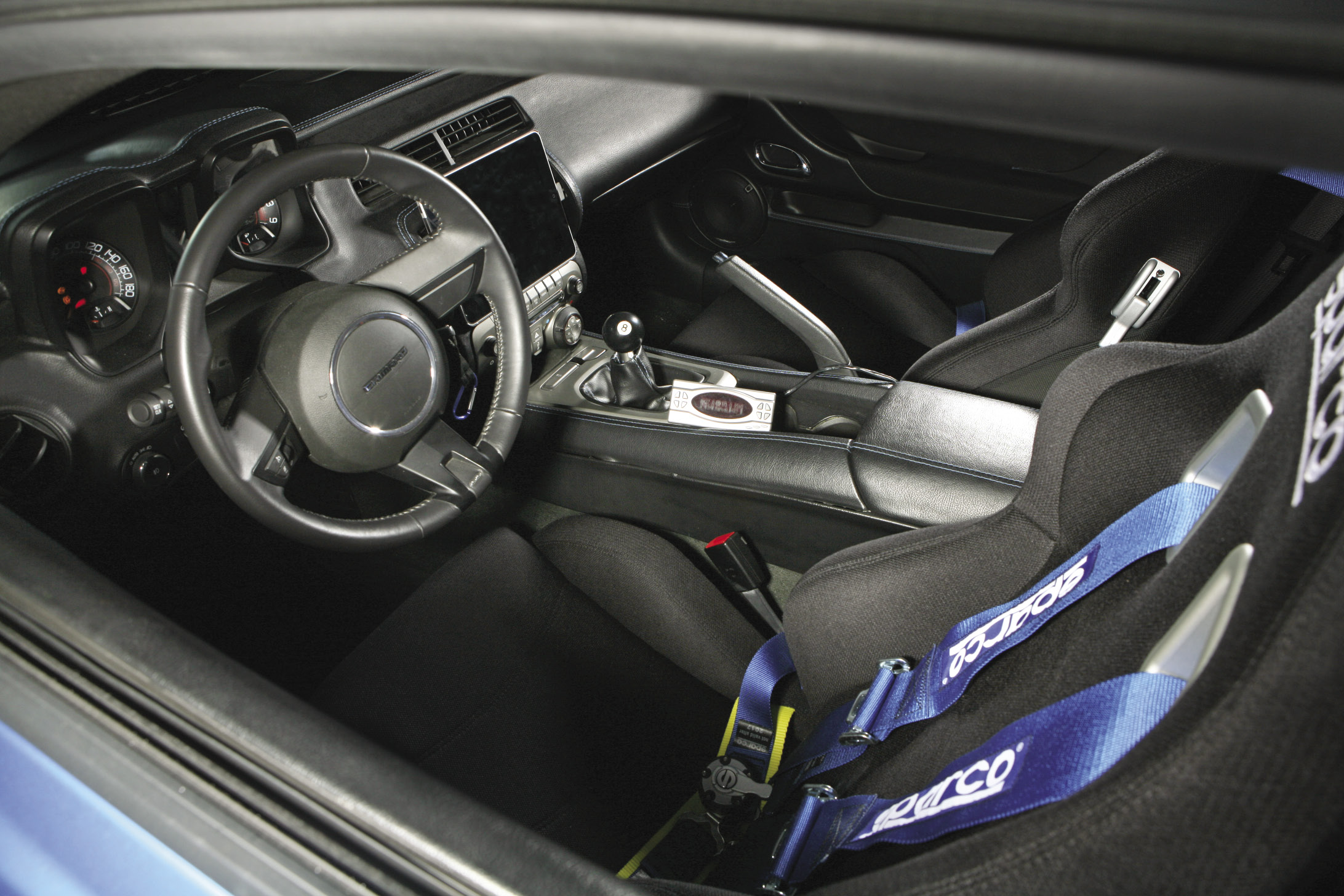 After a successful 2011 SEMA show Wossner asked Shellum to return to the 2012 show, although Shellum decided a full makeover was necessary to ensure people didn’t think the car was unchanged. Off came the matte white wrap that the car wore at the 2011 show, replaced by a 3M matte metallic blue wrap. The VIS front lip and OEM front bumper were pulled off the car, and a new OEM ZL1 bumper was dressed with a custom carbon fiber lower valance and fog surrounds to match the VIS carbon fiber side skirts, rear valence and hood. AEM increased the horsepower yet again with a methanol injection kit, and Shellum classed up the rollers with a set of 22-inch Hamann PG3 wheels, powder coated in matte black and wrapped in Continental ExtremeContact rubber. Sparco R505 reclining race seats were replaced the OEM seats, and a Speedware Motorsports harness bar and Sparco four-point harnesses were used to give the car a sportier theme. Once the doors to the 2012 SEMA show opened, it was apparent that Shellum had accomplished his goal of turning heads in the Wossner Piston booth. 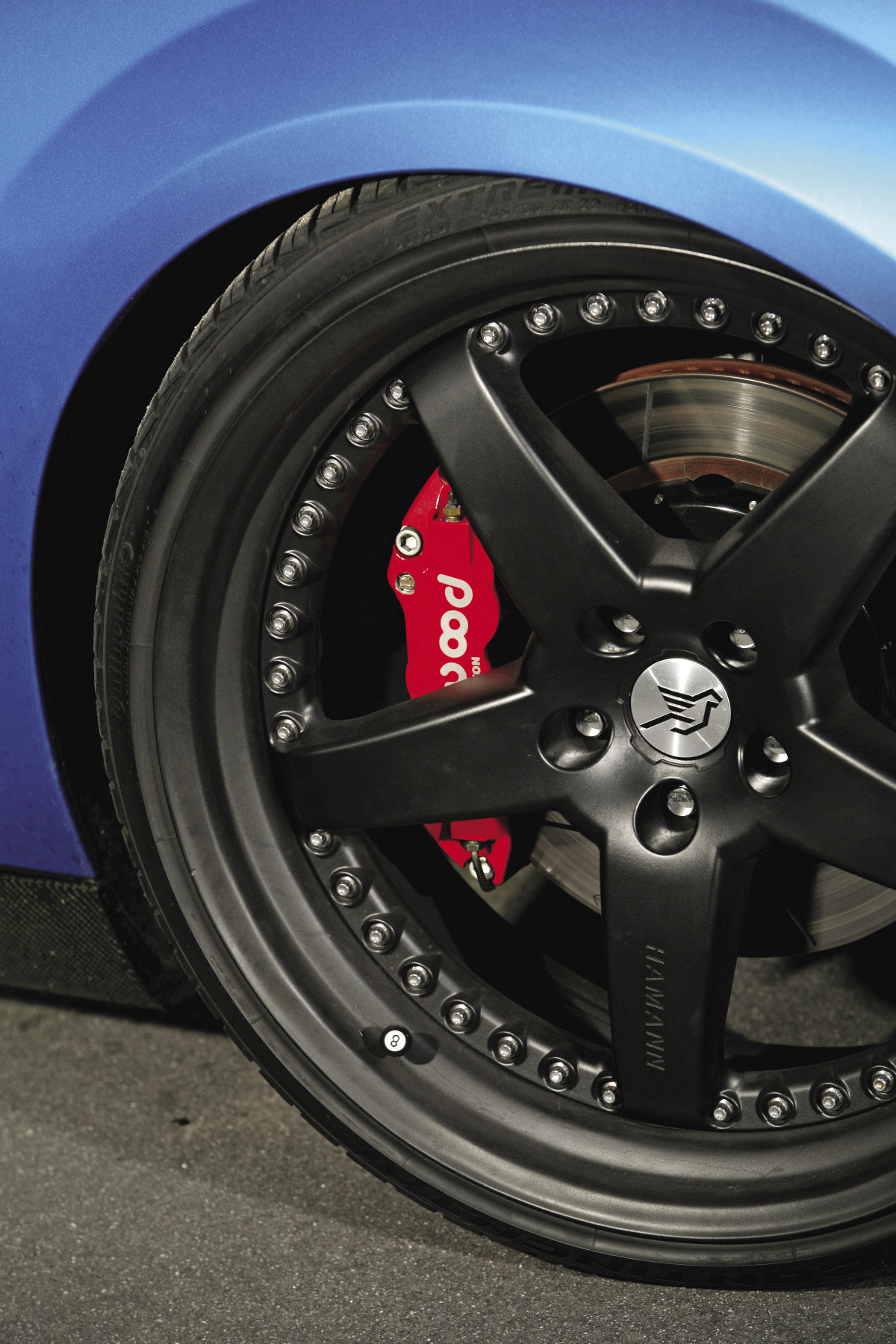 While no car project should ever be viewed as completed, a potential buyer has emerged for this pretty bowtie-wearing mistress. With over 600 hp, massive stopping power, fully customizable air suspension and an iPad controlled 1,500 watt stereo, this Camaro is a bigger jaw-dropper than most cars around. By choosing high-quality parts and upgrading the major systems of the car without wasting time on knick-knack parts, Shellum got the best bang-for-buck as well as the backing of several major sponsors. Shellum earned several awards at shows in Southern California over the past year, proving that cars don’t need to be overdone in order to take home hardware. “I still drive the car whenever I can,” Shellum tells us. “It’s probably the loudest, fastest, and meanest car I’ve ever driven, but it rides like a million bucks. It’s going to be hard to see my baby go to a new home, but she’s all grown up now.” 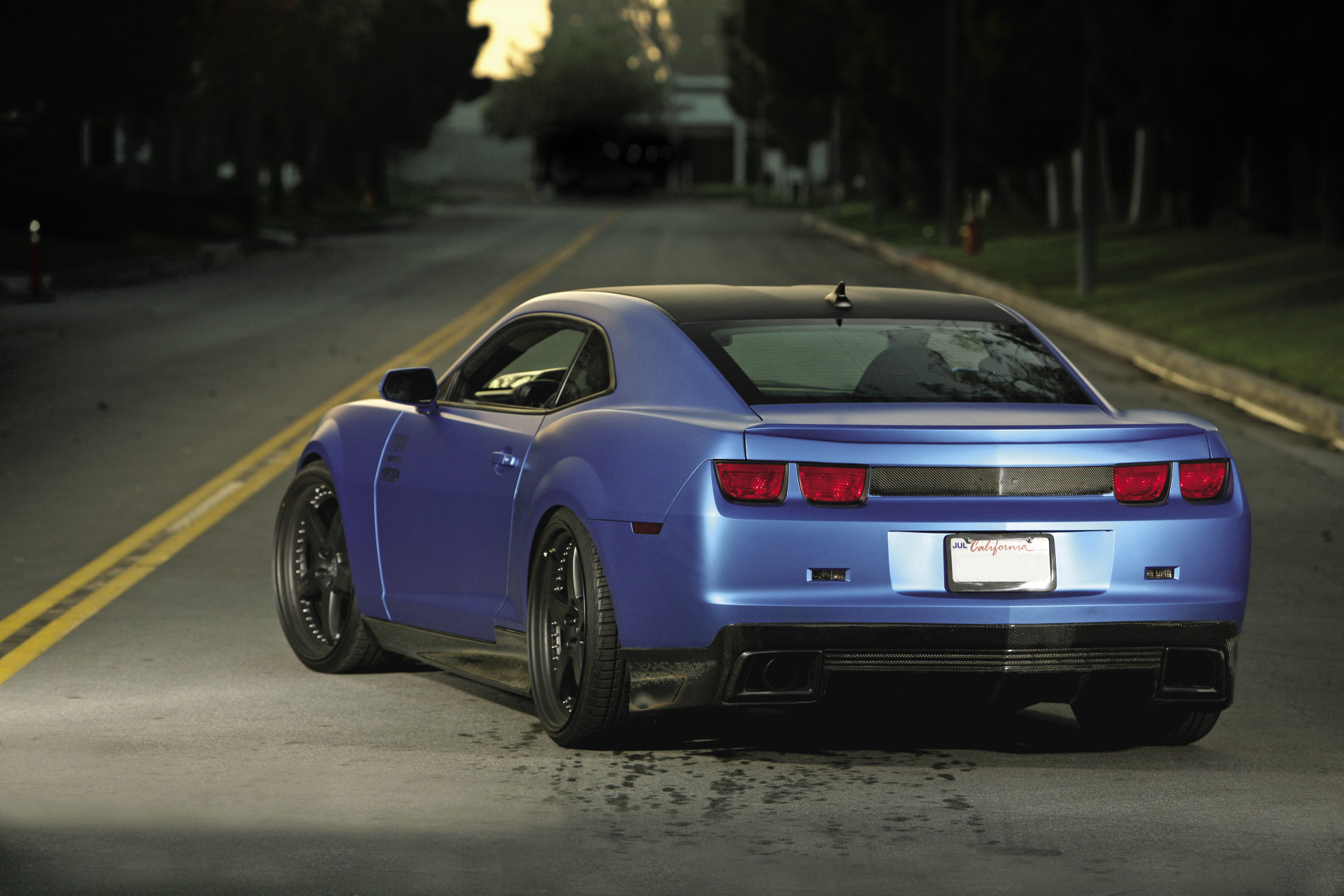 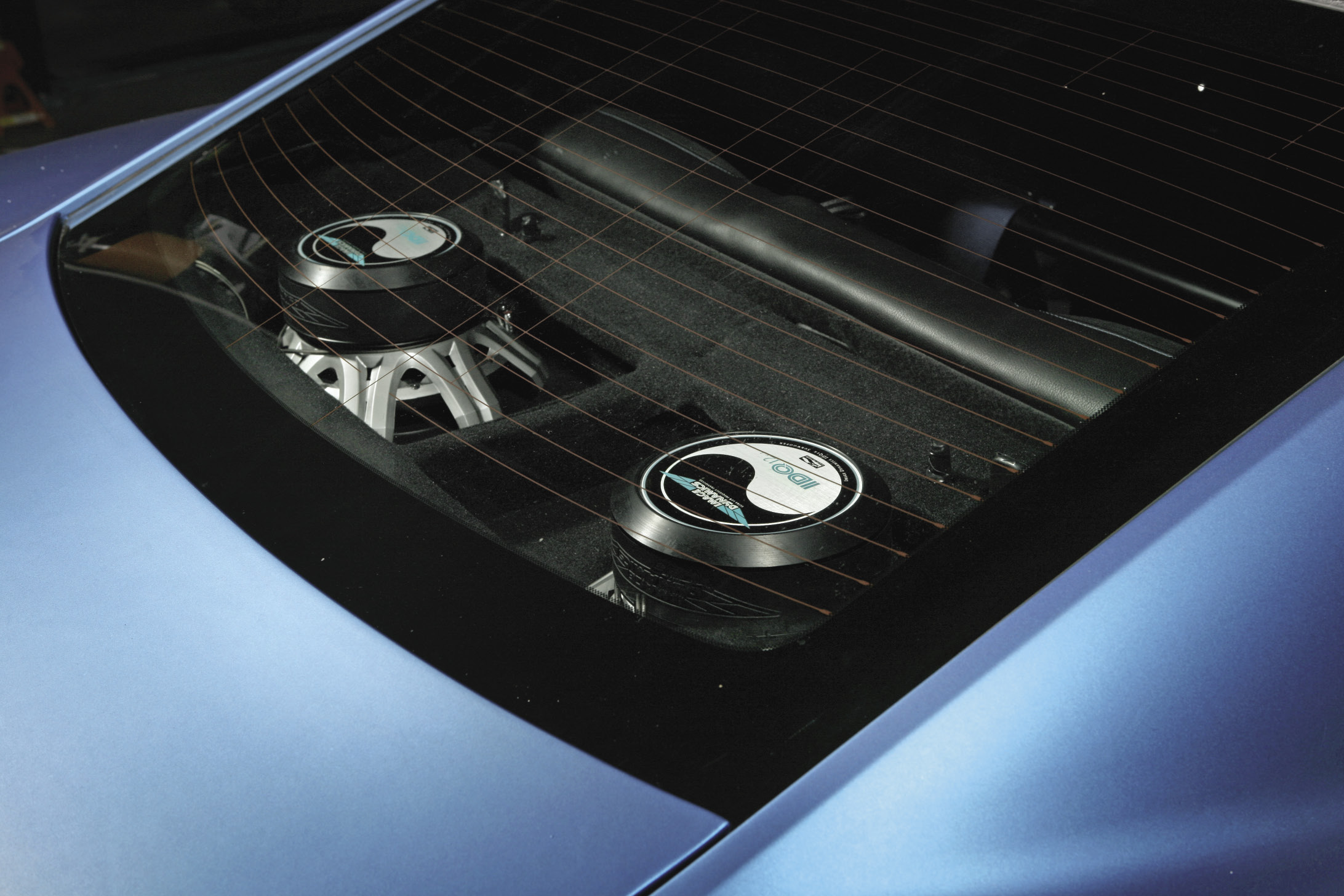