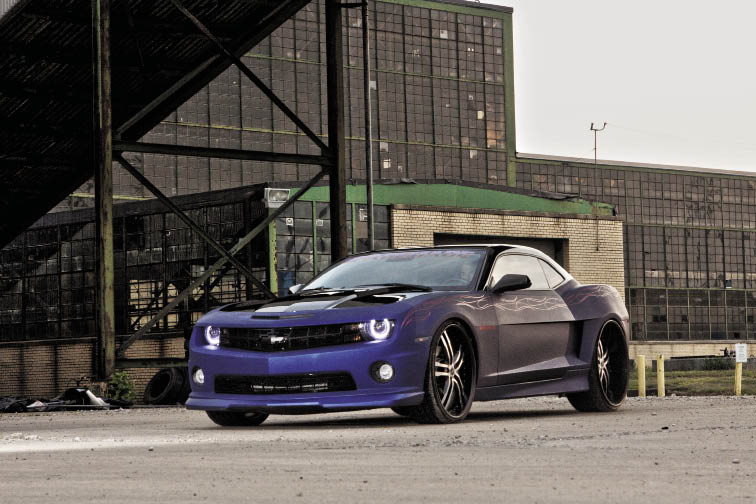 It wasn’t all that long ago that we were introduced to a Cinncinnati-based custom shop called Spade Creations. Now we don’t consider Southern Ohio to be a hotbed of car customization, but Spade Creations is an exception to the rule. The first build we saw of theirs was an NSX for a doctor that was more meticulous that the brain surgery its owner performed on a daily basis. Since then, their work has truly opened our eyes to various platforms because the work is just that solid.

A shining example of their work is this Camaro. Every single detail is worth a second look and the level of quality inside and out is one that would make GM engineers blush. The Camaro has really asserted itself in the aftermarket, and the Spade Kreations build definitely gets noticed in a sea of modified cars. We wanted a closer look and to get the inside info on the story behind the build.

“The new Camaro platform was hot,” explains Marketing Director Ken Thornton. “It was the perfect canvas for what we wanted to do, plus the whole pony car wars between the manufacturers really was heating up.” 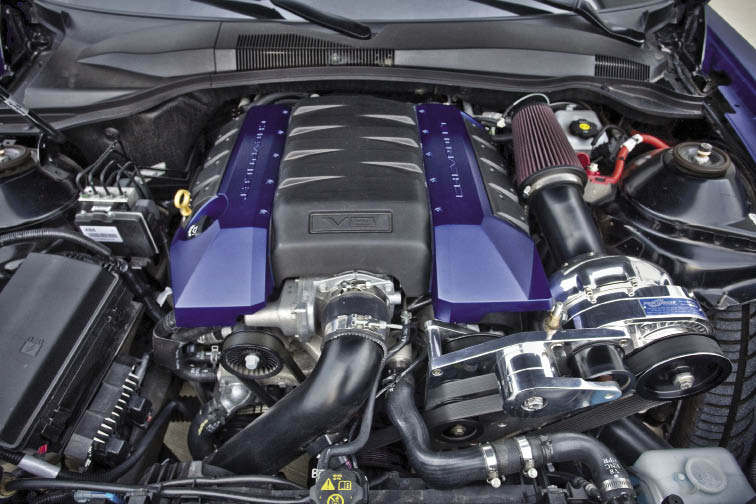 With a high horsepower 6.2L motor under the lid, the new Camaro SS doesn’t need much. However, the motor was fitted with an ATI ProCharger kit and a Magnaflow exhaust. The end result was a 540whp romp on the dyno which should be more than enough to keep the exotics at bay. 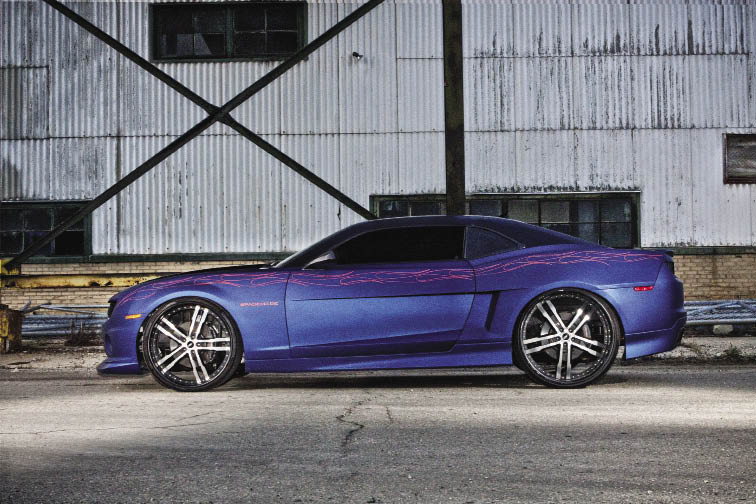 The exterior shell was an important consideration, but with the timeline they had to work with, Spade had to select some off the shelf parts in addition to their custom work. They decided on a GM Performance body kit in addition to a custom 1.75-inch widebody. The Lambo-inspired side vents were created and the gas door was relocated to the upper fender and the car was fitted with BF xenon HIDs and Umnitza angel ayes. To complete the look, they selected a set of massive rollers from TIS. The Modular 16 wheels measure 24x8.5-inch in the front with a staggering 26x11-inch rear wheel rock a 7-inch lip. Up front the Pirelli P Zeros measure 275/25R24 and 295/25R26s on the massive drive wheels. The wheels are so big, that the rear suspension had to be modified to accommodate them. The correct stance was achieved using a set of the BC Racing coilover suspension with both ride-height and damper adjustability. 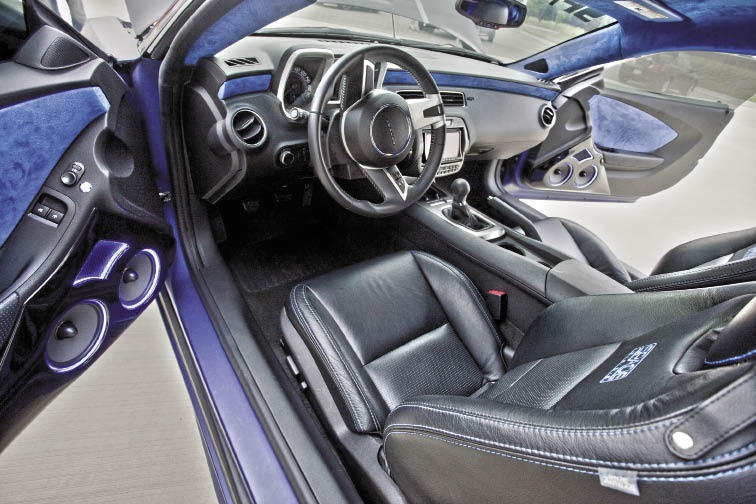 The inside features a number of Spade Creations touches to get the project noticed. The entire interior has been crafted by Spade Made with suede and custom fiberglass panels galore. The door panel inserts are custom as are the rear side panels and headliner. The seats have been recovered in Katzkin leather with Barracuda inserts. Before reassembly, everything was Dynamat’ted and cable was run in anticipation of a hard hitting system. 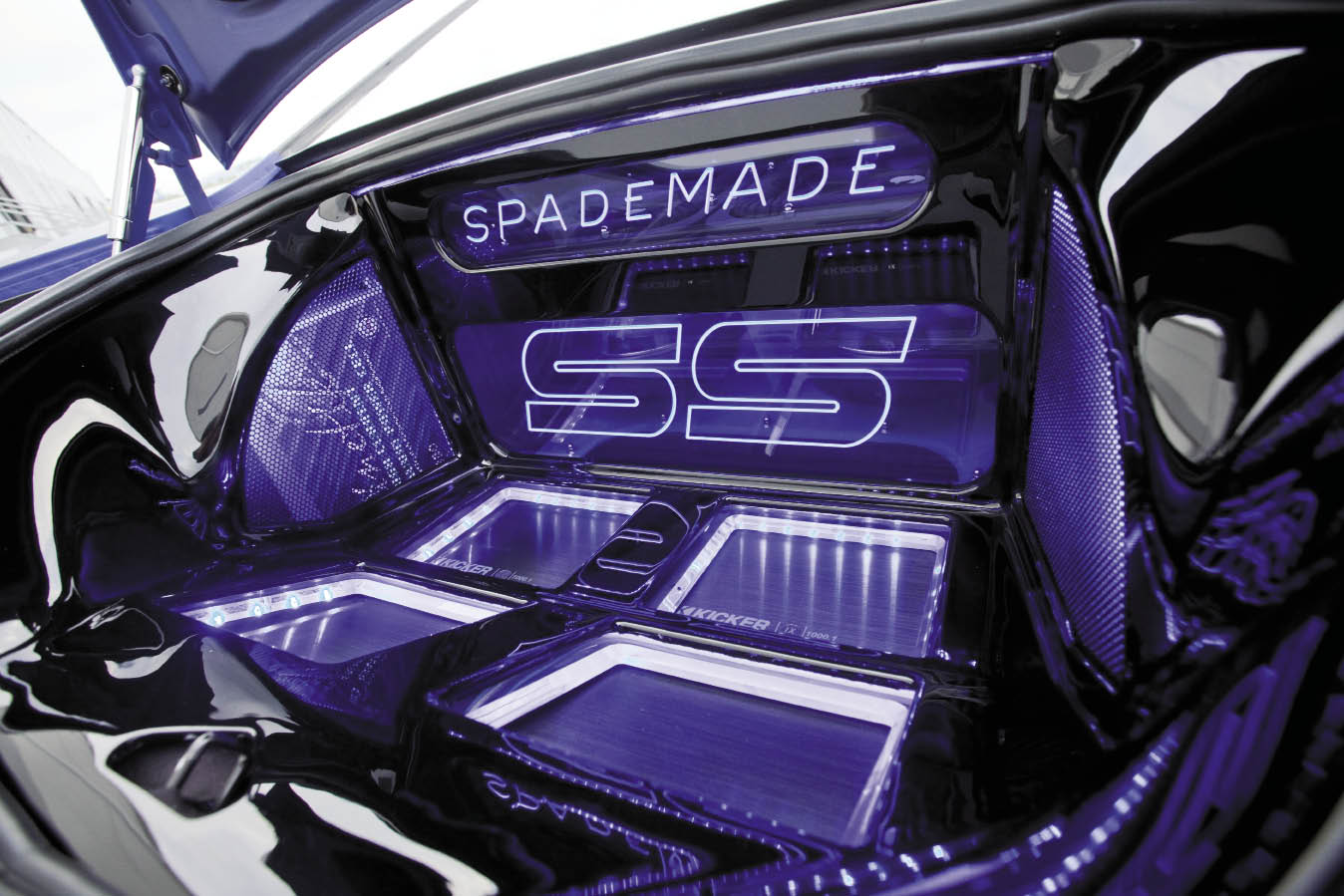 The system was spec’ed out and the headunit was replaced with an Alpine INA-W900. The signals are fed out to a Kicker IX5004 4-channel that feeds Kicker RS65.2 components up front with Kicker RS60.2 component sets in the rear. The lows head to four Kicker IX10001 mono block driving two Kicker SoloX 12 subs. The subs are in a multi-chambered ported enclosure firing through a custom rear decklid. The Fiberglass trunk panels painted gloss black along with a Plexiglass SS logo engraved into it and three LCDs in the rear trunklid. The decklid has been covered in suede and was fitted with perimeter lighting to accent the piece. Lighting up the system is a pair of monster Kinetik HC2400 batteries in the trunk.

Spade has certainly made some bold moves with this Camaro, but at the same time they might have gone unnoticed. The suspension needed crazy modifications to jam those rollers in and the widebody has a factory feel to it, and without PAS telling the story, who would’ve known? 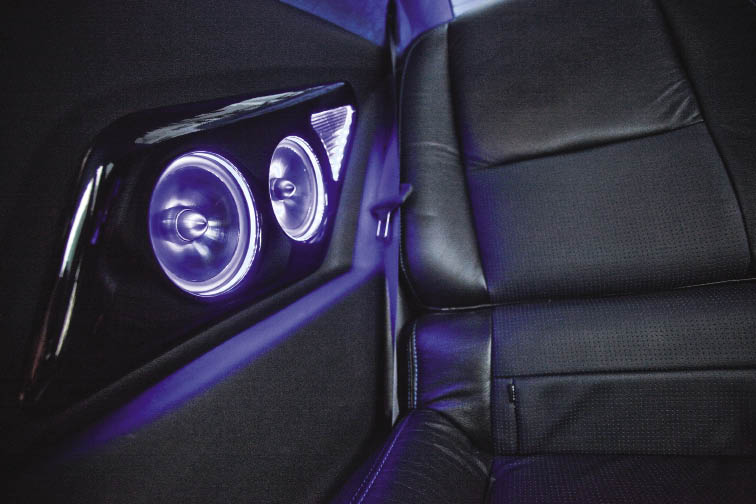