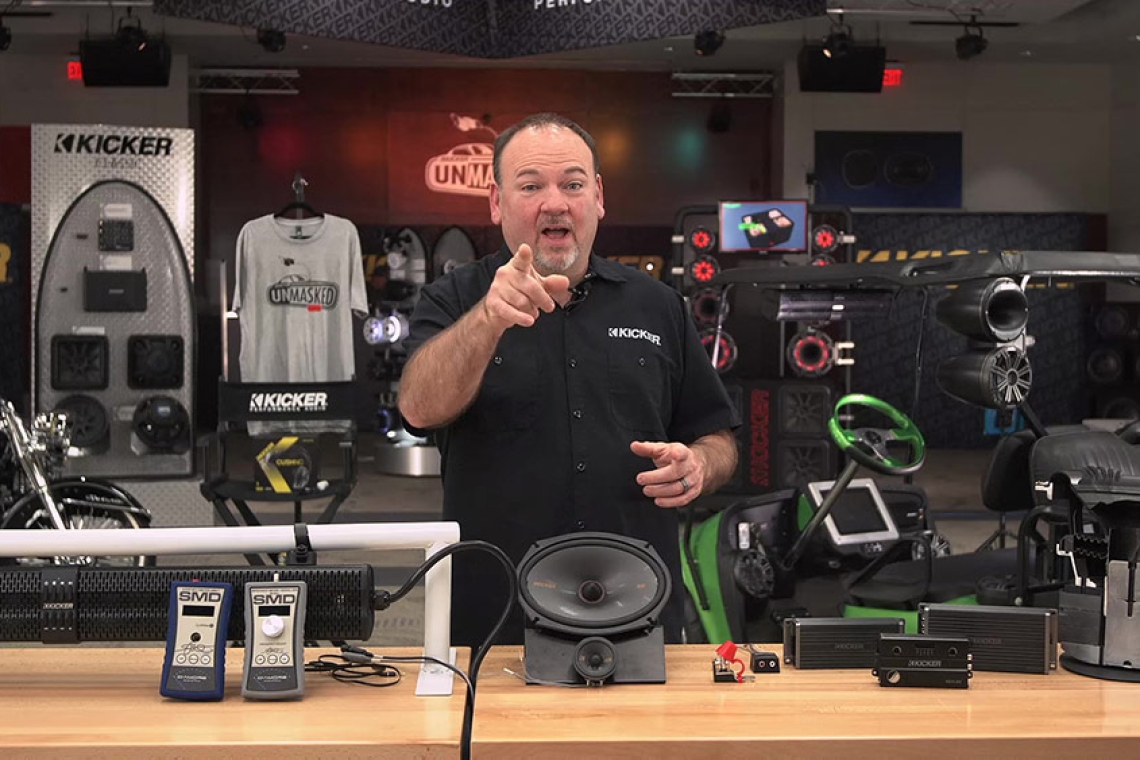 In recent years, the 12-volt world has drawn back the magic curtain, especially on Facebook and YouTube. Names like EXO Contralto, Big D Wiz, Dean and Fernando, Steave Meade and Everyday Audios have collectively earned millions of loyal fans with their honesty, insatiable curiosity and unbridled enthusiasm for car stereo.

In October 2020, KICKER took a headlong leap into YouTube, creating an epic ten-station show designed to reveal more than a dozen products to be released in the coming year. “UnMasked” was born. 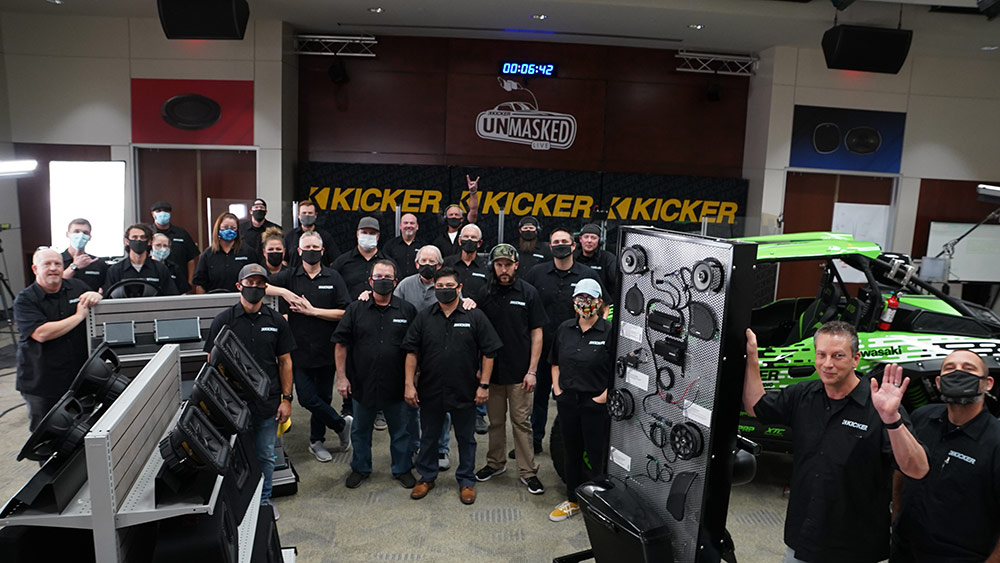 The inspiration for a live show stemmed from the challenges inherent in the shutdown. Traditional in-person shows like SEMA and CES were put on hold, leaving thousands of manufacturers with a looming question to answer how best to show off the 2021 product lineup with no shows to attend.

“It was a difficult decision,” said Kevin Campbell, KICKER’s Marketing Director. “SEMA was not an option, but KICKER still wanted to connect with dealers and consumers alike. We’ve always adhered to the philosophy of waiting until a product is ready, then coordinating an introduction. UnMasked gives consumers a glimpse of what goes on at SEMA, showing viewers what the trades get to see at the show. It brought us to create KICKER UnMasked. It was about taking the mask off of SEMA: we were unveiling something.” 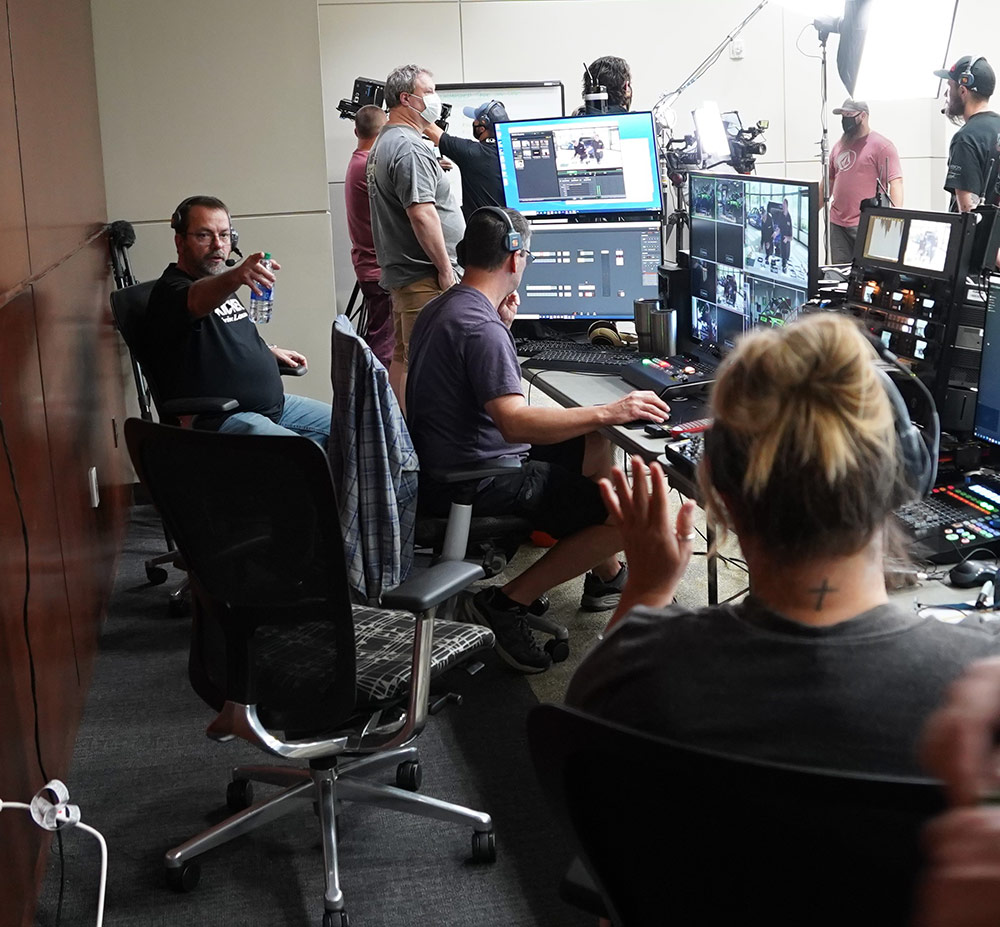 The show was designed to be informative and interactive, not “salesy” according to KICKER’s B2B Associate Marketing Director Kip Litsey, one of the creators of UnMasked. “The idea is to offer insight, answer questions and show how we create KICKER equipment. There's so much more to making the products that earn our name – the testing, the research, [and] the work can take years. We wanted to share how that is done, and why caring this much matters to us and to our customers.”

Viewers showed up in droves, asking thousands of questions and getting immediate answers from KICKER’s Social Media department, both in Spanish and English. A dozen products were unveiled live to consumers and 12-volt industry insiders alike, generating massive buzz in the online car audio community. The five-hour show ended with the highly anticipated announcement of KICKER’s Solo L7X subwoofer line.

Building on the success UnMasked generated, KICKER took the leap into a weekly show. Airing live on KICKER’s Facebook and YouTube channels every Tuesday night at 7:30 CST, the weekly show features guest hosts from across the industry. The guests often include accomplished car audio installers, engineers, 12-volt manufacturers, retailers, and YouTube celebrities. Questions are answered live, either by the KICKER social media team or by Mr. Litsey, the on-camera host of the show. The 90-minute show always ends with a live giveaway, often worth hundreds of dollars if not more.

The amount of work that goes into show preparation rivals that of a network news broadcast. Topics come from KICKER employees, industry news, social media and UnMasked viewers. Once a topic is established, guests are lined up, graphics packages are assembled and the set is customized for the show. After the broadcast is done, KICKER also creates UnMasked “Shorts”, a series of quicker videos made to highlight sections of the show. Overall, it takes about 20 hours of work to complete UnMasked and its sister episodes every week.

The UnMasked community has quickly grown. With over 1,200 comments posted on average per show, the conversation is “lively” to say the least. Viewers from across the country flock to their screens, routinely adding their opinions to the commentary. Sometimes it’s to ask a question, to interject an opinion, or to add information to the conversation. KICKER often highlights those comments live on-screen, which Litsey then answers.

“One of our strengths is interfacing with people. We’re not this big, cold, corporate entity,” says Mr. Litsey. “We’re people with passions and personalities - that’s KICKER. When people interact with us, it creates a comfort zone. They can develop a bond with us as people. They want to get answers from the people they deal with every day. They want to know the Sales Managers and Trainers. They want ‘The KICKER Guy’ - someone they know and trust.”

Robert “HiFi” Vega is Co-Host of 12V Talk & Reverse Polarity, both popular car audio shows on YouTube.  “You might be able to learn this in a similar way if it was canned, but it’s not nearly as entertaining, and you wouldn’t get that sense of community. We see KICKER as a family now, not just a big monolithic company.

As far as the community as a whole, I think it’s like 12V Talk – we saw silos of car audio guys. Everyone doing their own thing, and no one collaborating. We wanted to bring everyone into the fold and be a community. Adding KICKER into that community is a huge outreach. I don’t see any other manufacturer doing this right now. Some are doing training, but that’s not the same thing. KICKER wants to hear you. They want to hear what you think.”

Like HiFi Vega, Mr. Campbell believes the importance of UnMasked extends beyond the raw information, but the free and rapid exchange of ideas that routinely occurs on-camera and in the comments, even after the live show has ended. “Part of the intangible benefit that’s come from UnMasked is that we’ve created a community that is genuinely interested in talking and learning about audio. I’ve seen that we grow our audience every week, with folks that share this enthusiasm. They want to stay updated, and they love knowing about what’s coming. This helps keep the momentum going. I see a bright future for UnMasked, and for KICKER.” 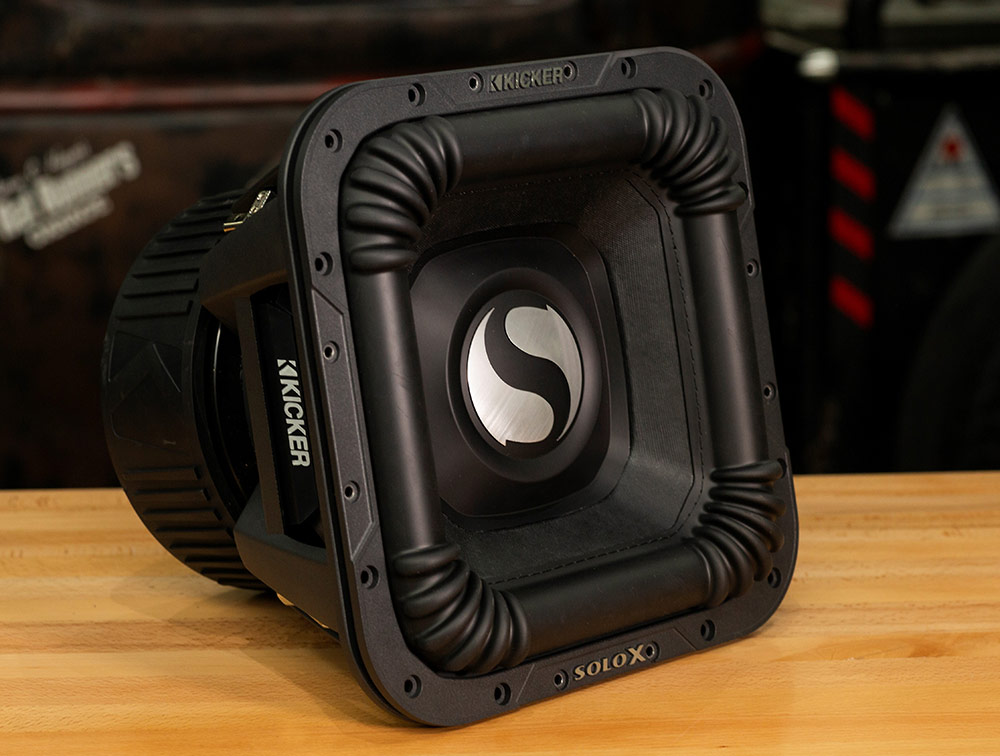