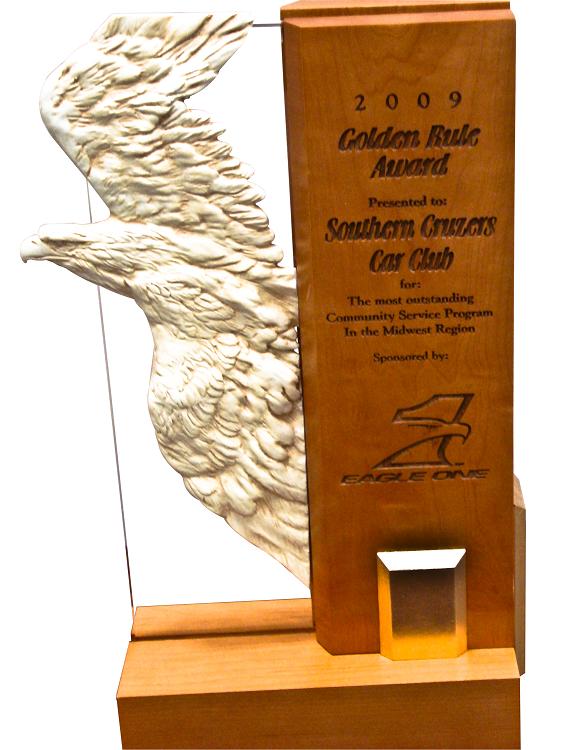 There is more to car clubs than cars and Eagle One will recognize and reward fourclubs with their annual Golden Rule Awardfor the most exemplary charity and community service program in their region during 2010.

The grand prize winner will receive $1,500f\or donation to a favorite charity.  The otherthree winning clubs will receive $500 for a pet charity. The grand prize will be awarded  to one of the four clubs judged to have performed the most compassionate deed. Winners will be selected in four regions of the U.S.: west, midwest, east and south.In addition to the $3,000 in cash donationsmade by Eagle One and associate sponsor Valvoline, winners will receive a generous supply of Eagle One appearance care products and Valvoline motor oil for fund-raising events, as well as a custom-designed trophy.

An entry form will be available September 20and may be downloaded from the EagleOne website, www.eagleone.com.  An entry form may also be obtained by calling 818-501-1445. Deadline for entry submission is December 31,2010.  Winners will be notified by February 11, 2011.

Best of Show Winners at Elite Tuner: Mesa, AZ 2020
Elite Tuner hosted their Arizona event at the K-Sport HQ in Mesa and we wanted to give a shout-out to some of the winners at the event....

PASMAG's Tuning 365 - Episode 16
In this episode of Tuning365, Adam Gordon and Randi Bentia feature our conversation and shop tour with Chelsie Lesnoski and...