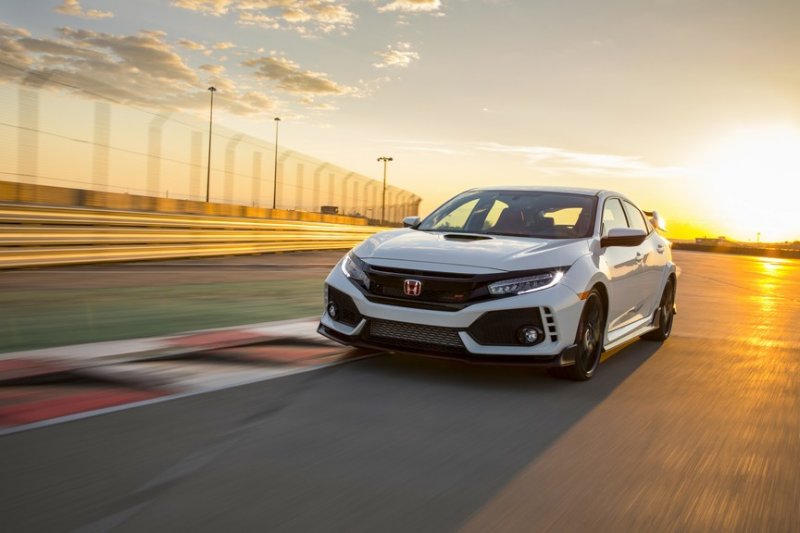 The wait is almost over -- the 2017 Honda Civic Type R will soon be here. In fact, Honda's hot hatch will begin arriving in Canadian dealerships on Friday, July 14 with a starting MSRP of $40,890.

Of note, Micky Slinger, editor of PASMAG, is attending the Canadian press drive event in Montreal this week and will have a full report on the Civic Type R -- including track driving impressions -- in the Fall 2017 issue of Ignition Luxury and Performance Magazine. Additionally, Lee Bailie, editor at Ignition, will be driving the car for a week next month (July 24-31), so be sure to check out www.ignitionmag.ca in early August for his review.

MARKHAM, ON - The all-new 2017 Honda Civic Type R – the ultimate performance variant of Canada’s best-selling car and the first-ever Type R-badged Honda sold in Canada– goes on sale July 14, 2017 in one comprehensively-equipped trim with a Manufacturer's Suggested Retail Price MSRP of $40,890.

The Type R puts the power down through a short-throw 6-speed manual transmission with helical limited slip differential hooked up to 245/30ZR20 Continental SportContact 6 high-performance tires on 20x8.5-inch black-finished aluminum wheels. Speed is scrubbed by 350mm cross-drilled rotors clamped by 4-piston Brembo aluminum calipers in front and 305mm rotors with single-piston calipers in the rear. 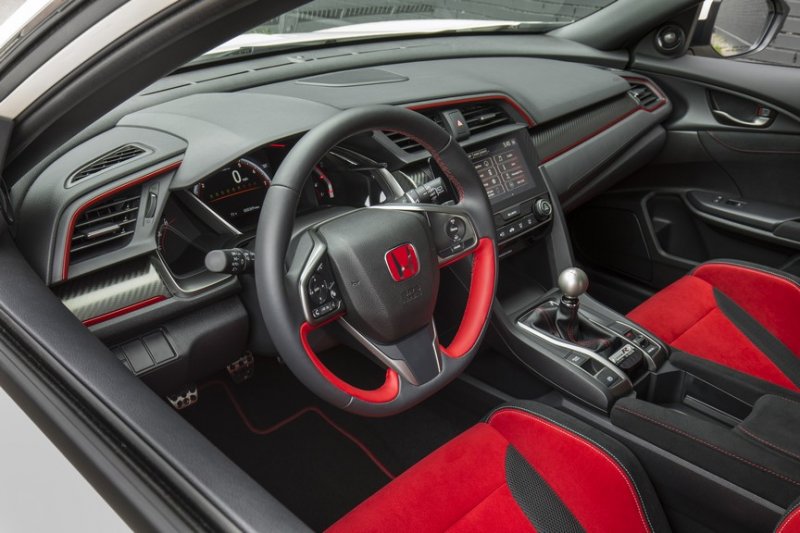 The Adaptive Damper System, along with the dual-pinion variable-ratio electric power steering, drive-by-wire throttle, and brake system, are tied to the Type R’s three selectable driving modes, with COMFORT, SPORT and +R settings, allowing the driver to dial up the Type R’s reflexes depending on the driving environment. The throttle ECU also features driver-selectable automatic rev matching with two profiles, one for COMFORT and SPORT modes and one for +R mode, to assist drivers in making smooth downshifts without the need for heel & toe downshifting.

Additional performance-enhancing Type-R exclusive features include a weight-saving all-aluminum hood (-5.3kg) and the application of structural adhesives to the body for added structural rigidity, as well as a high-flow exhaust system with three centre-mounted exhaust outlets, and a comprehensive aerodynamic package that delivers an exceptional balance of high-speed stability and low drag.

The all-new 2017 Civic Type R offers a sporty and stylish exterior with advanced aerodynamics that immediately distinguishes the hatchback at a glance, while also providing a performance-focused interior with comfort, convenience and the latest in technology and connectivity features. 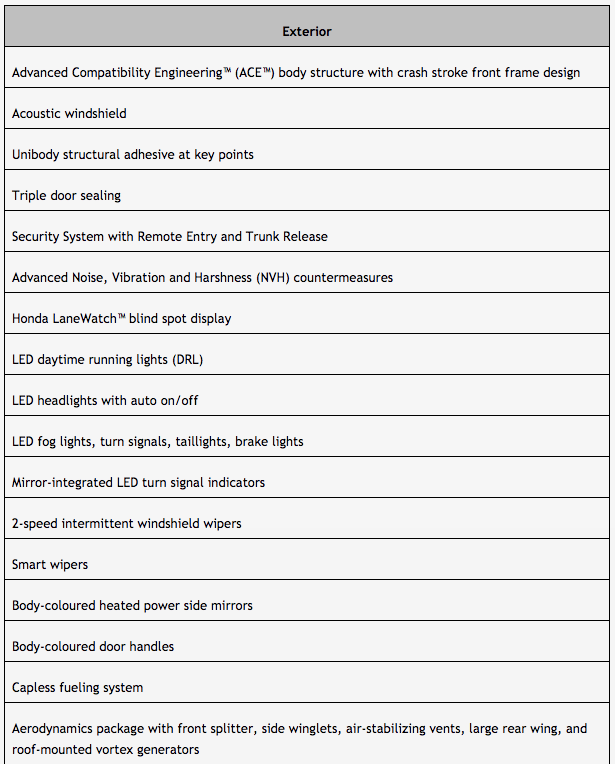 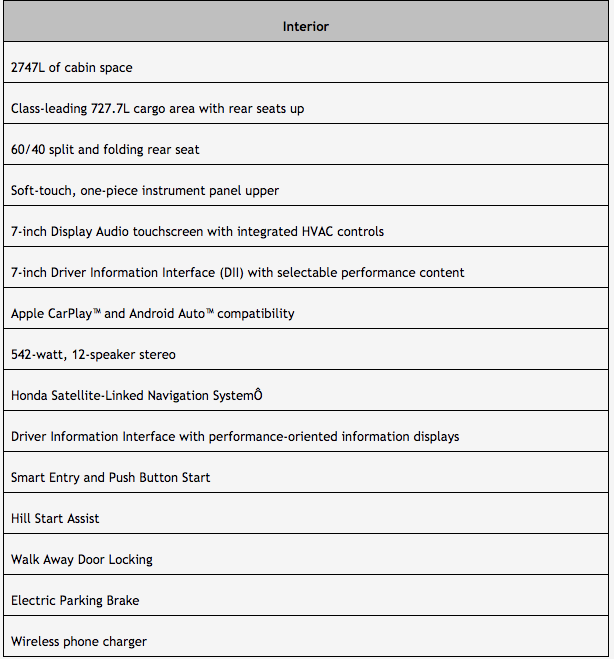 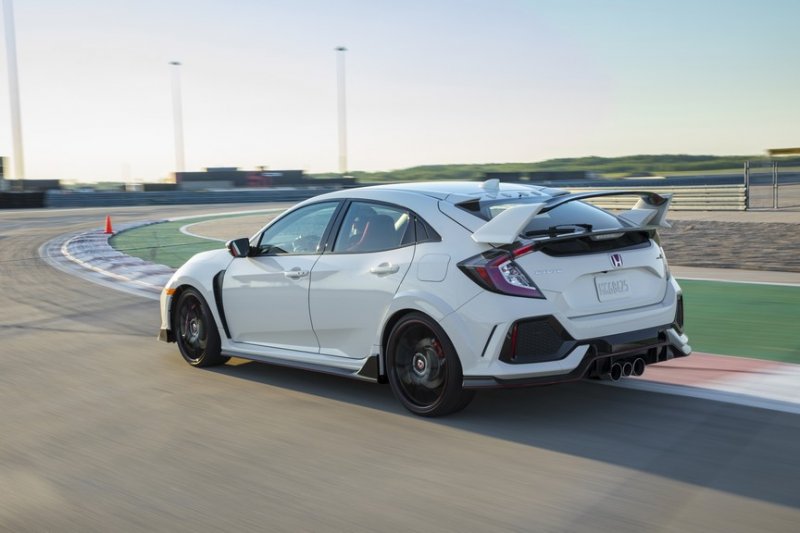 Like the rest of the Civic family, the new Civic Type R significantly benefits from advances in-vehicle connectivity and audio performance with a new generation of cutting-edge technologies. Type R standard features include a 7-inch capacitive touchscreen Display Audio interface with Android operating system, with a unique red graphic theme. Matching the aggressive spirit of the Type R is a standard 542-watt 12-speaker audio system. The system enables simplified smartphone connectivity with a single cable connection and is compatible with the Apple CarPlay™ and Android Auto™ platforms. Featuring streaming Bluetooth® audio and SiriusXM®, the Civic Type R offers a rich selection of audio and connectivity choices. The Honda Satellite-Linked Navigation System™ with Voice Recognition and Honda HD Digital Traffic is standard equipment on the Civic Type R.

The 2017 Civic Type R for the Canadian market is produced exclusively in Honda’s Swindon, UK plant with the engine produced in Anna, Ohio. 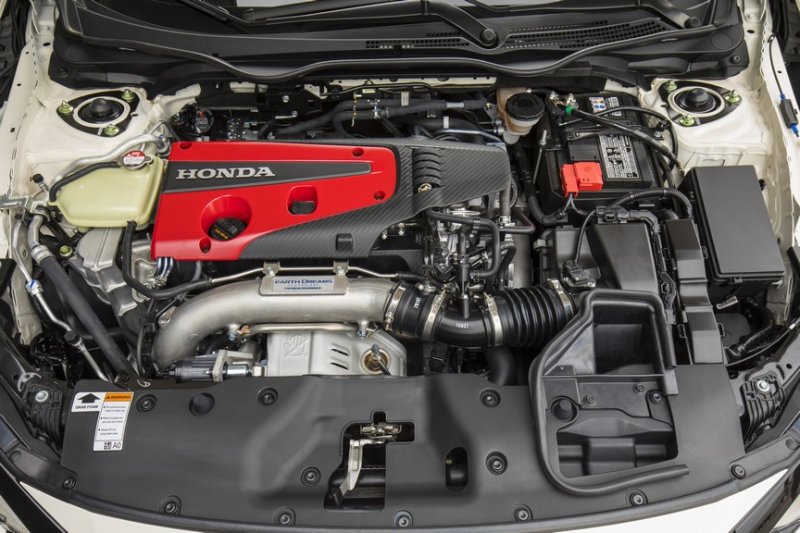 About Honda
Honda Canada Inc. (HCI) was founded in 1969 and is the parent company for both Honda and Acura vehicle brands in Canada. The company has produced more than 7.8 million cars and light trucks since 1986 at its two manufacturing facilities and builds engines at a third manufacturing plant in Alliston, Ontario. Both manufacturing facilities are extremely flexible and currently build Honda Civic and CR-V models. Honda Canada has invested more than $4.7 billion in Canada and each year it sources nearly $2.1 billion in goods and services from Canadian suppliers. Honda Canada has sold more than four million Honda and Acura passenger cars and light trucks in Canada.

K-Swapped Toyota Tacoma
I first noticed this one on the TF Works Instagram page, and it’s definitely something different. TF Works makes K Swap kits for a few vehicles,...