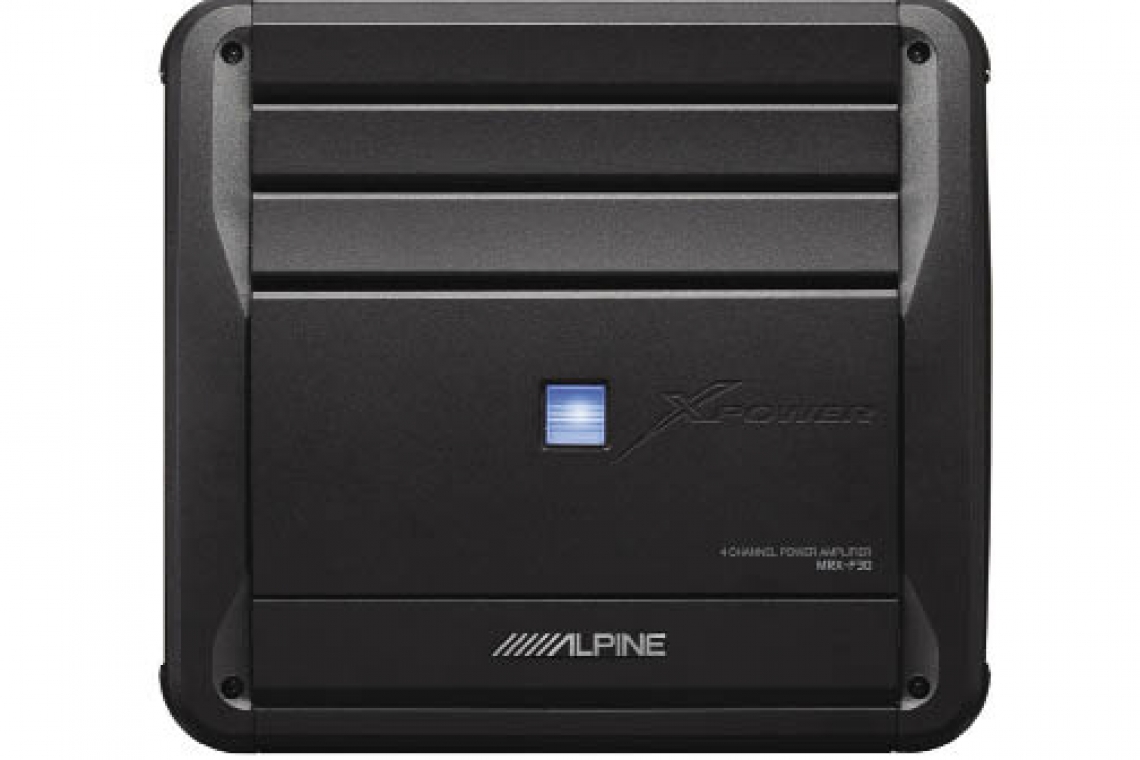 The Alpine MRP series of amplifiers have been one of the most popular selling series of amplifiers on the planet. With that kind of success, some companies would simply use the old “if it ain’t broke, don’t fix it” adage, but not Alpine. The engineering team at Alpine took what they had learned from the ultra high performance PDX series of amplifiers, and incorporated much of that technology into their new third series of amps, labeled MRX. We asked for a sample to test for ourselves, and a few days later a brand spankin new MRX-F30 showed up here at the lab. We put the new $299.95 Alpine amp through a battery of tests and listened to it for several hours, and here is what we found.

The MRX-F30 (and all the new MRX series amps) are Class D designs. The MRX-F30 is a four channel bridgeable model, rated at 50W x 4 into four ohms, and 75W x 4 at two ohms. It can also be bridged into 4 ohms, and in that mode is rated at 150W x 2. With that amount of power on tap the amplifier is still quite compact, measuring about 9.8”x 9” x 2.25”. It’s a good looking amp too, with wide smooth heatsink fins making up a contoured top surface finished in a satin black powdercoat, accented by a large blue illuminated status indicator. Injection molded terminal covers fasten to each end of the amplifier and trim it out nicely, as well as serve to hide unsightly connection points as well as the amps mounting screws. Connections are made on each end of the amplifier, with the power and speaker terminals as well as a pair of 25A ATC fuses on one end, and the signal inputs and controls on the opposite end. The power wire terminals are beefy and will easily handle a full spec 4 gauge cable, which is a welcome upgrade from the MRP series, but the speaker terminals are still the typical 0.33” nickel plated screw type. On the input signal end of the amp there are dual gain controls and adjustments for the 50-400Hz high-pass or low-pass crossover settings for the front and rear channels, which of course can also be simply left in full range mode if desired. Additionally, the rear channels also have a variable bass EQ control (0 to +12dB) that operates regardless of crossover mode. One feature that I did find lacking on this model that is available with the mono and five channel models, is a remote level control for the rear channels, which would be useful when using them bridged to a subwoofer. Another improvement compared to the MRP amps is a full four-channel high level input section, allowing full fading functionality in an OEM integration type scenario. And speaking of OEM integration, the MRX-F30 also incorporates DC signal sensing circuitry on the high level inputs, so the factory radio can turn the amp on and off without the need for a separate remote-on wire.

Inside the amplifier is a typical well laid out Alpine four-layer glass epoxy PCB. The MRX amplifiers utilize Alpine’s STAR topology for improved signal integrity and reduced noise. Precision tolerance surface mount parts are used throughout, and a rugged MOSFET power supply has 6600µF of capacitance, with another 5400µF of capacitance for the secondary side. Taking a page out of the PDX amplifier playbook, Alpine incorporated the same sort of Global Modulation Technology that has given the PDX amps what is arguably the best sound quality of any Class D amp in the business. The concept behind this technology is basically to check that the output signal is the same as the input signal, only bigger. Where most Class D amps only check this once, after the switching stage, the MRX series of amps add another loop of feedback after the output filter. And the output filters are special as well; the MRX-F30 uses shielded ferrite coils of oxygen free copper square wire, and ultra high speed film capacitors. This attention to detail and adaptive control ensures very high quality signal reproduction and greatly increases the amplifiers damping factor, and goes a long way to improving the overall sound quality.

To make sure that the sound from the amplifier doesn’t shut off when things get cooking, Alpine has incorporated a sophisticated and elegant thermal management system. Where other amps simply reduce their output by 6dB or more when they get hot, the MRX series of amps monitor the heat, and dial back the power in two smaller, almost inaudible steps.

Okay, most of you regular readers know I do my listening sessions in my quiet listening room using a high end reference system that I’m very familiar with. This is one of those amps that made me remember just why I made the decision to do in-lab listening in the first place. Doing my listening in a dedicated room, with controlled conditions, when an amp sounds really good or bad, it’s quickly evident. And this amp sounds remarkably good! 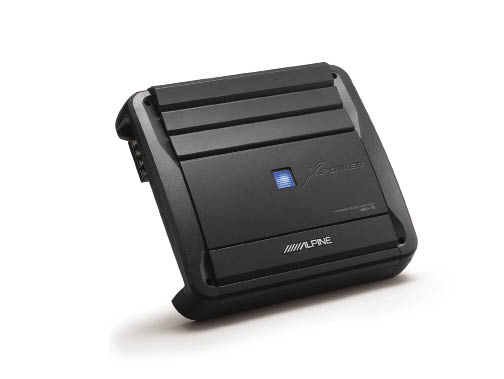 The MRX-F30 reproduced high frequencies with smoothness and exceptional detail. It was never brittle or harsh sounding, the best way I can think of to describe it, is “natural”. The amp sounded flat and very linear with respect to frequency response, with bass that went deep and tight. Difficult tracks with a lot of female vocal, piano, horns, and acoustic guitar had very natural timbre and detail. The amp produced a good soundstage and phantom center image, which is a testament to good control of both the inter-channel gain, and the phase response of the amp. There was no audible turn on or turn off noise, and even though I listened at enthusiastic levels for several hours the amp barely got warm. I played everything from Bach to ZZ Top, and I came away very impressed. This thing just sounds natural and transparent, precisely the way a good amp should, especially one that’s this affordable.

Moving on to the test bench, the Alpine amp tested very well, and proved to be a solid performer, actually exceeding all of its rated specifications. THD was very low, the amp measured a ridiculously low 0.008% at 1 watt into four ohms! Signal to Noise also was better than the rated spec at -90.5dBA, and the frequency response was flat all the way down to 4Hz! As you’d expect from a Class D amplifier, efficiency was excellent, particularly at the fractional power levels that most of us do the majority of our listening at. This is an important aspect of amplifier performance, because there is a significant difference in average current draw between this amp and a typical Class AB amp at the power levels we are at most often. Less current draw means less heat, and an easier load for your charging system.

I have to give Alpine a lot of credit, for basically taking the heatsink layout from the immensely popular MRP series of amplifiers and adding PDX type technology. The result is a big performance gain with the price only going up by a hundred bucks. What we have now is a small footprint amplifier that’s a better sounding, better looking, all around better performing amplifier. And thanks to the four channel high level inputs with signal sensing, it’s easier to integrate with any OEM system, while still being perfectly suited to a full-on high performance aftermarket application as well. In my book that makes the new MRX series an even better deal than the MRP amps are.