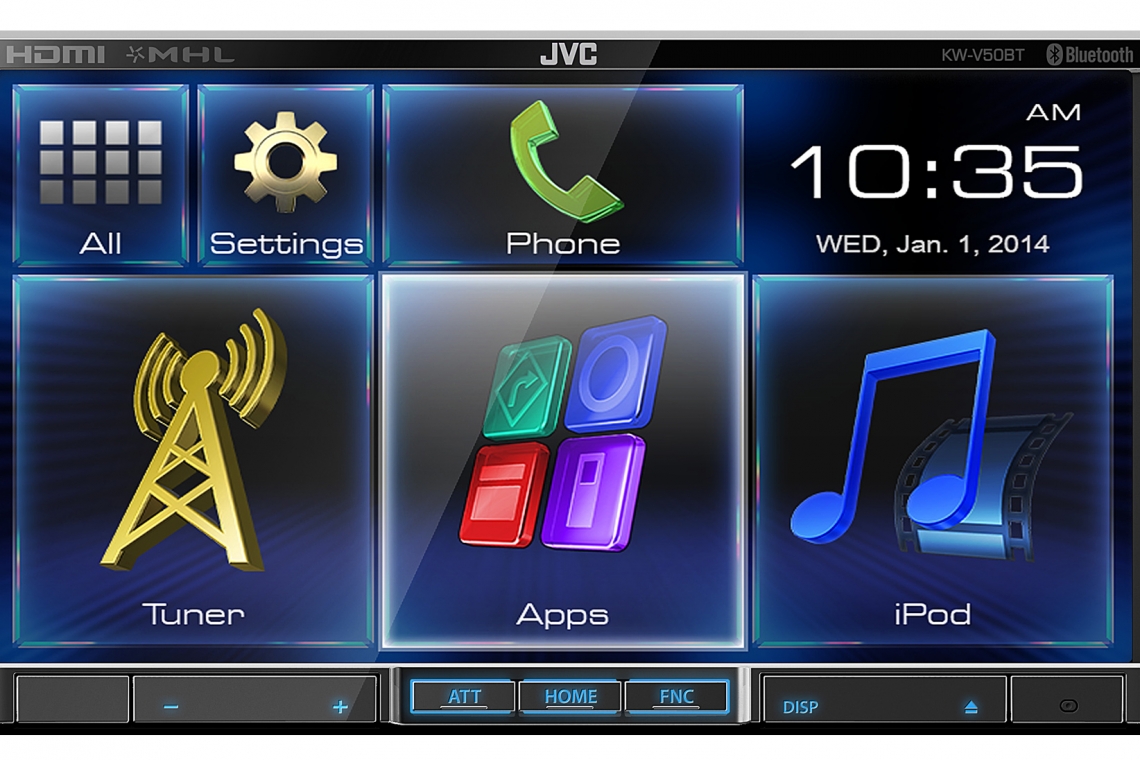 For those who interact heavily with their smartphone and their favorite apps contained within, JVC has introduced a double-DIN multimedia receiver with you in mind.

With a top quality seven-inch touchscreen, CD/DVD playback, USB port and built-in Bluetooth, the KW-V50BT is designed to satisfy all of your in-car entertainment needs. Its ability to interface with either Apple or Android-based smartphones via the addition of HDMI/MHL connections makes it a great choice no matter which type of smartphone you use, plus it allows you to keep your options open in the future.

This is a head unit designed primarily for people who prefer to take advantage of the apps installed in their smartphones. With the addition of HDMI/MHL input (cables sold separately), it’s possible to transfer control of your smartphone (and the majority of your smartphone apps) directly to the seven-inch TFT touchscreen. The KW-V50BT is also capable of the playback of streaming audio services such as Pandora and iHeart Radio. Certain operations, such as zooming in and out of navigation apps still need to be controlled by the smartphone screen.

The home screen provides three possible source options with one touch, with others available on a secondary menu. To make everyday operations easier, simply choose your three favorite sources to display on the home screen.

The motorized 1.15-megapixel touchscreen can be set to various angles for easy viewing, and the panel color and button illumination provides over 30,000 different colors to choose from. So yeah, it will match your dash lighting.

Background themes can be selected from eight built-in themes, or you can import your own image to display. Rear seat video outputs are included along with dual zone audio, so keeping the kids entertained in the back seat will be simple. Other available accessories include a rear view camera input (activated by selecting reverse gear), SiriusXM satellite radio, and compatibility with most factory steering wheel controls using an external adapter. 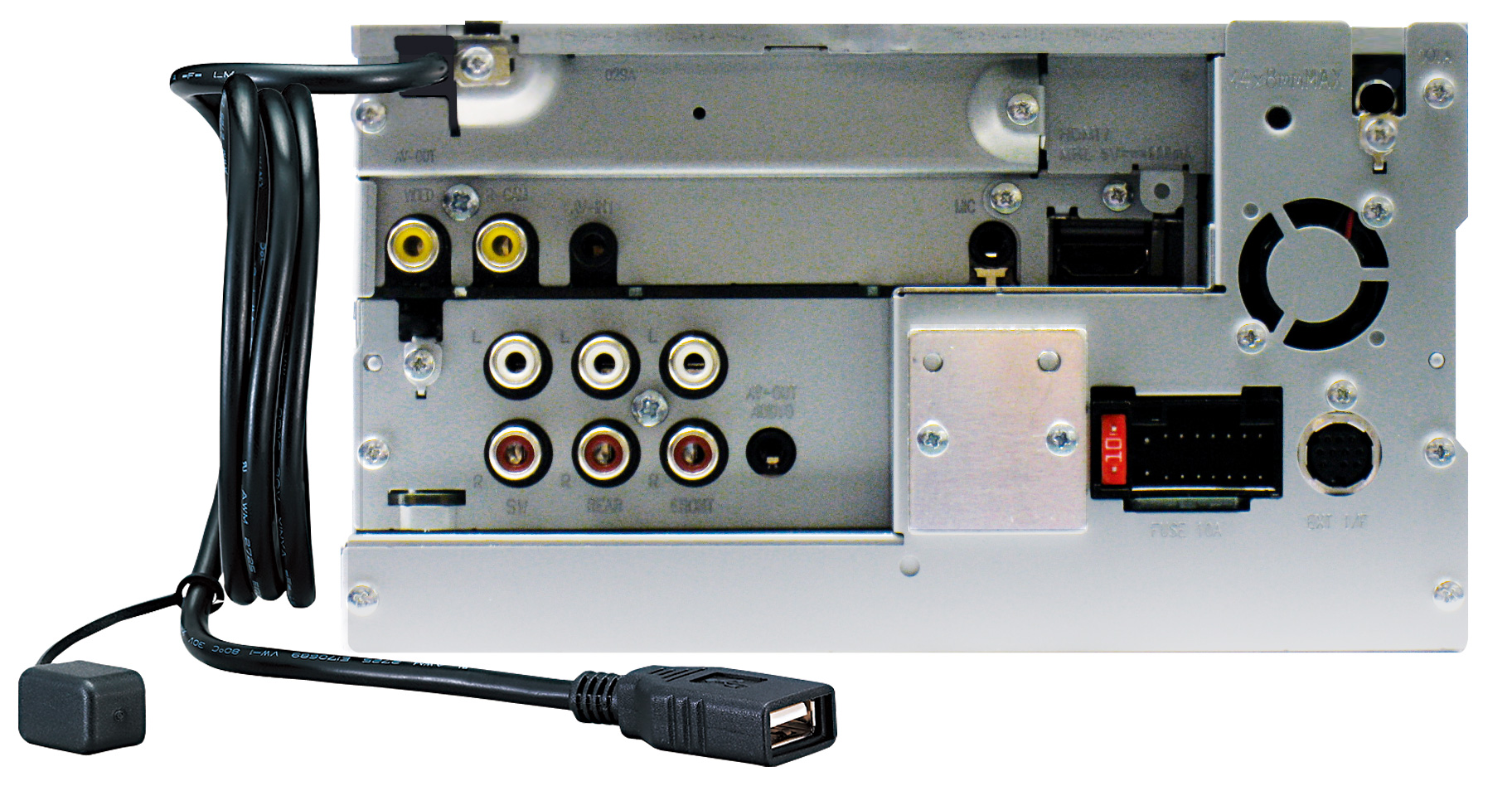 The KW-V50BT is equipped with a four-channel power amplifier and front, rear and sub pre-outs. The amplifier is rated at 22 watts per channel, and the output voltage of the pre-outs is advertised at four volts.

For signal control and system tuning, a three-band parametric EQ provides adjustment for 12 different frequencies. The front and rear pre-outs can be set separately to one of eight high-pass crossover frequencies, or simply left at full range.

The subwoofer output comes with five low-pass frequency settings or an all-pass setting. In addition to the crossover frequency, the sub outs also have adjustments for phase and level.

The JVC unit is very simple and easy to operate. The majority of frequently-used functions require minimum input. Volume is adjusted via hard buttons on the lower left edge of the faceplate, but track changes are done on the touch screen. The on-screen icons are large enough to select easily, and the amount of pressure required on the touch screen is near perfect. However, all is not sweet and light in terms of the KW-V50BT’s functionality. I find myself wanting more than just three source choices on the home screen. The size of the three source selection icons is huge, so adding another source or two would not have hurt the ease of use. I also miss having an HD Radio tuner, but with iHeart Radio available and a good data plan, this isn’t a big issue. Another minor gripe is the inability to adjust the subwoofer level without at least four touchscreen presses and three menus. For many enthusiasts, the sub level is one of the most often adjusted controls, so it makes no sense to have it buried this far down. Aside from that, the unit seems pretty straightforward to use and adjust.

Listening
In the listening room, the KW-V50BT proves to be a very good sounding and able performer. The sonics from the DVD player and the iPod interface are top notch as you’d expect from a high quality audio company like JVC. All of the controls and adjustments work well, and pairing my phone to the unit is dead simple. I also tried out the included infrared remote control, and it works great. Bluetooth audio sounds as good as can be expected from this type of source, and is pleasant, if not truly hi-fi worthy.

On the Bench
With the unit connected to my Audio Precision analyzer, I run a battery of tests and the results are very good. The internal amplifier makes the same power as the other high quality head units that use the same MOSFET IC, and signal-to-noise confirms a very low noise floor. Frequency response, crosstalk and THD also measure very well. Pre-out voltages don’t quite meet the published spec at 3.7-volts, however. Output impedance is average, at 235 ohms.

Conclusion
With the ability to interface with virtually any Apple or Android smartphone, the JVC KW-V50BT has a lot of appeal to the advanced or habitual smartphone user. Even better, people who care about their music will appreciate the excellent sound quality and tuning control, and everyone will enjoy the customization options and layout. If it’s time for you to replace that relic in your dash with some of the latest technology, pay a visit to your local JVC dealer and see what the KW-V50BT can do for you.