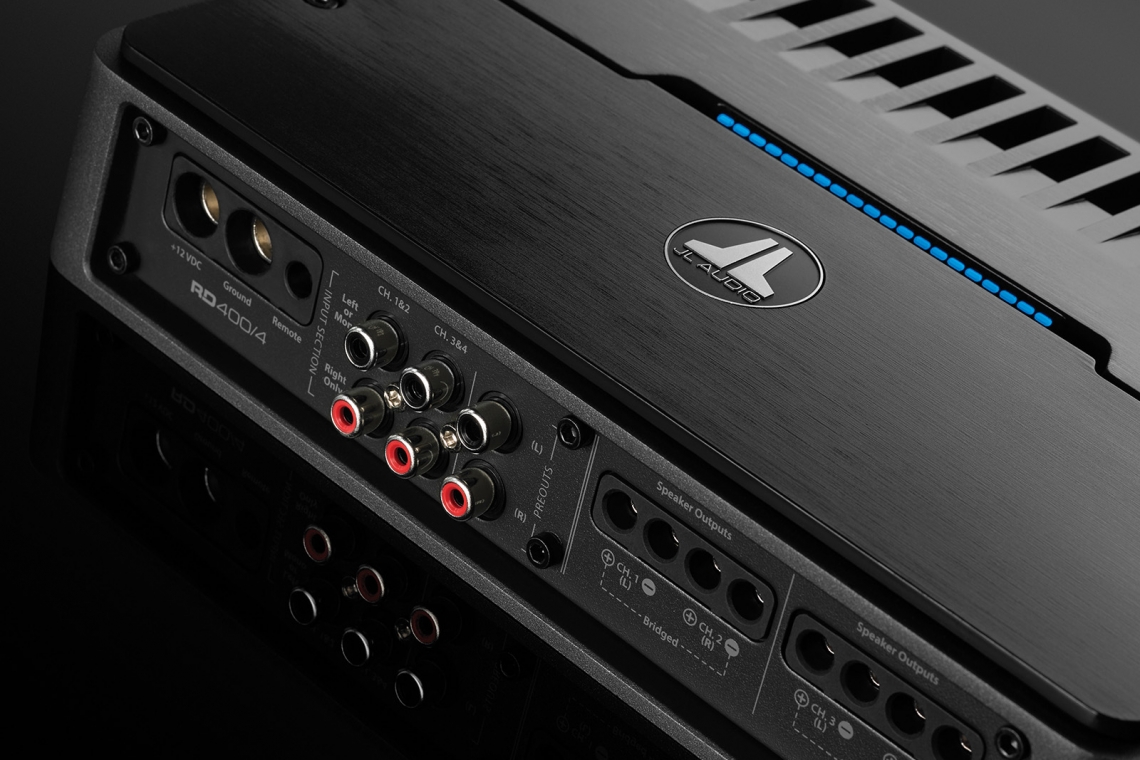 If you are one of those people who think all amplifiers work and sound the same, the folks at JL Audio and I have news for you; they don’t. Not only are there big differences in amp designs (even within a specific topology), the sonic signatures of some of these amps can be as different as chalk and cheese. 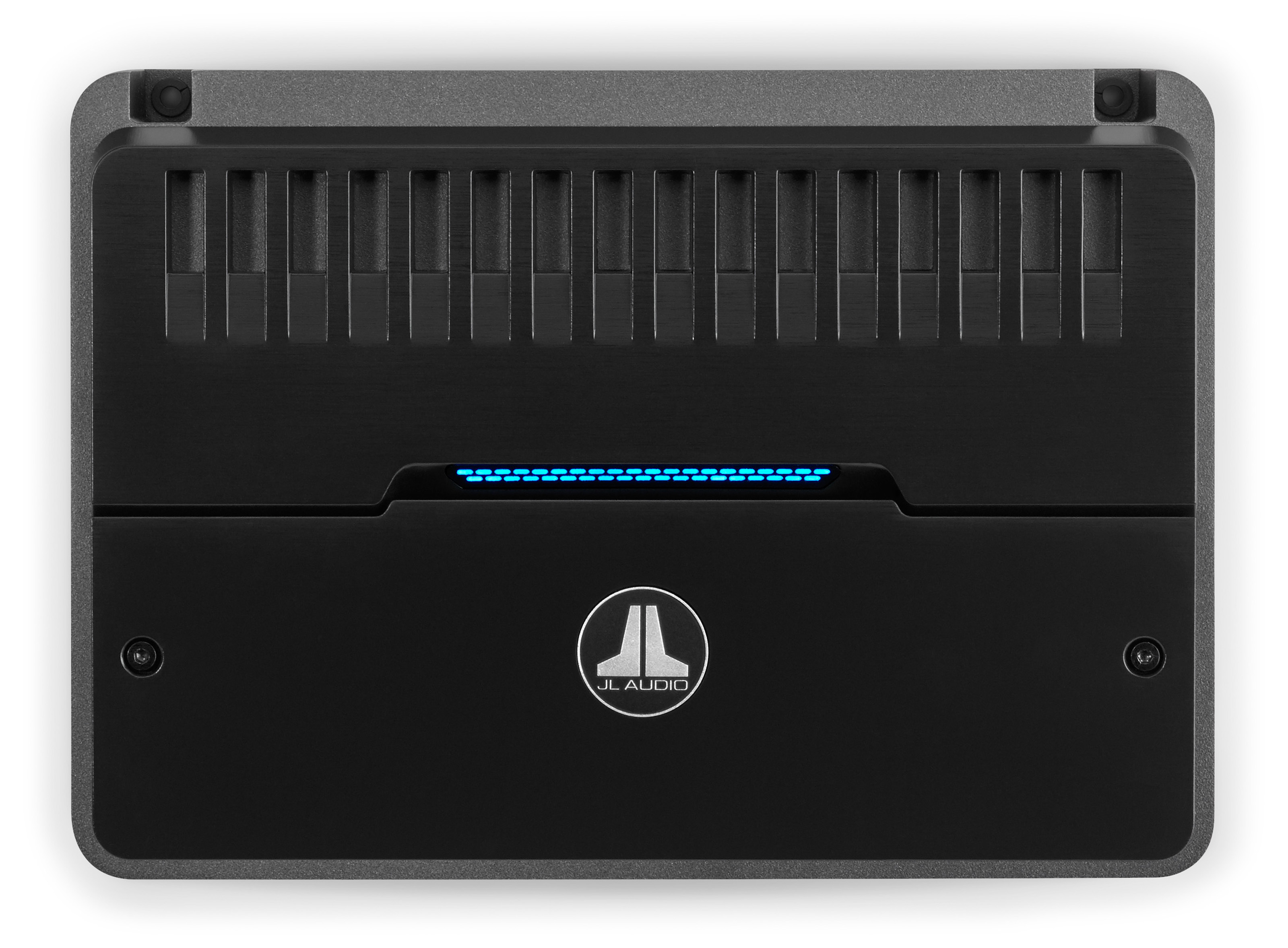 There’s no lack of four-channel Class-D amplifiers that provide prodigious power in a relatively compact footprint, and to be sure, the JL Audio RD400/4 is one of them. After that is where the similarities to other amplifiers end. Without getting into a total techno-geek fest, the RD400/4 uses a NexD output stage that operates at much higher frequencies (over 400,000 times per second), and has high speed feedback correction. This feedback circuit reduces distortion and ensures clean power output. 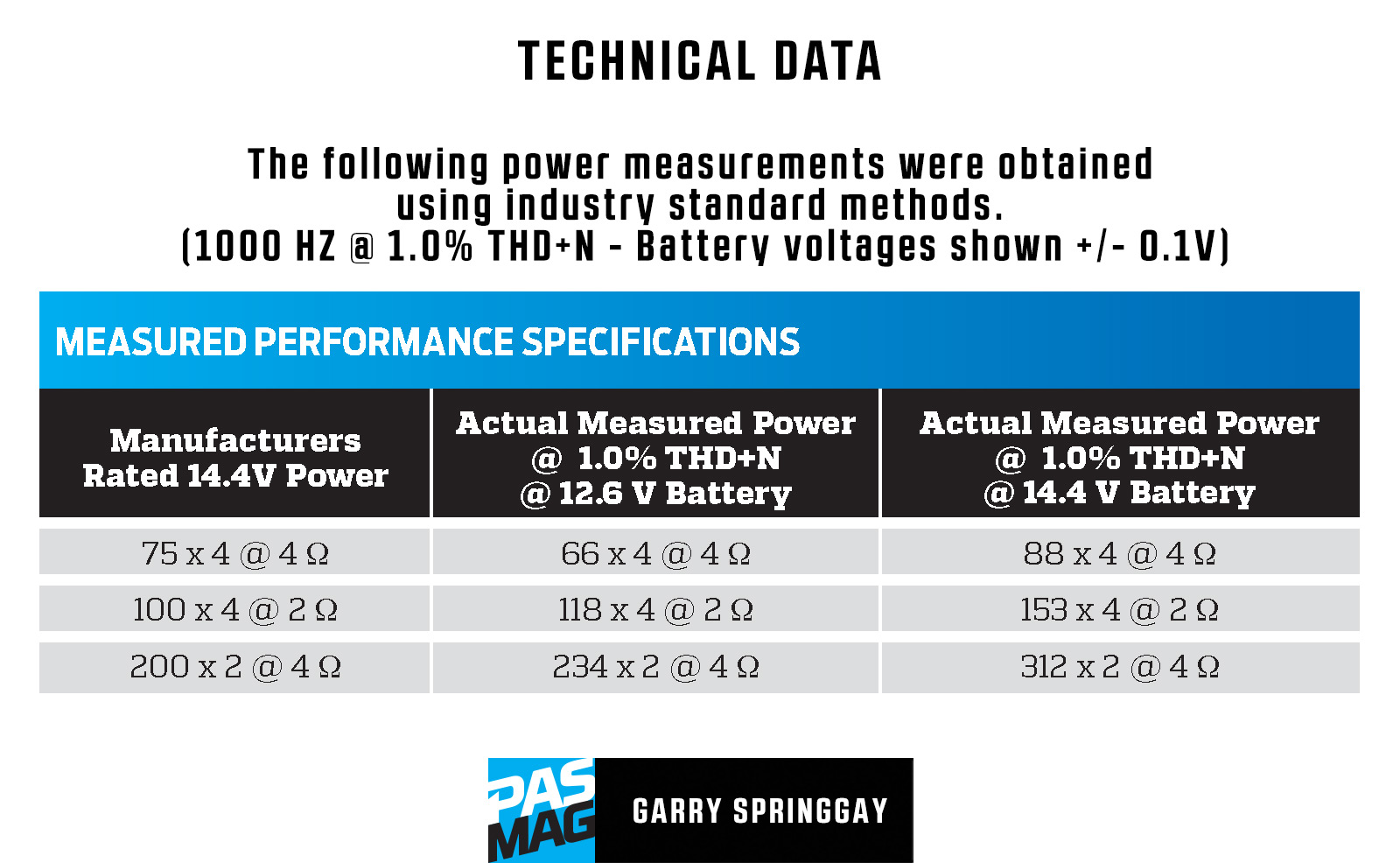 The innovations don’t stop there. The amplifier is designed to be compatible with typical single-ended RCA input voltages or accept direct connection of an OEM power amplifier without the need for any adaptor or high to low signal converter. Another benefit of this clever design is the use of balanced fully differential inputs for excellent common mode noise rejection to minimize the chances of radiated noise issues from the signal cables. Then, to make things simpler and as accurate as possible when setting the gain adjustments, there are easy-to-use clipping indicators built into the amp. Getting the gains optimized on this amp should take about a minute. If you are going to integrate the RD400/4 into an OEM system, wouldn’t it be handy if it had signal sensing turn-on? Well, it does, as well as DC offset turn-on capability and the usual remote-on wire. These features make the RD400/4 compatible with virtually any source, from an iPod to an amplifier. The amplifier can be used in full-range mode, or in bi-amp mode by setting the independent front and rear channel crossover filters appropriately. A third pair of full-range RCA outputs are available to drive a second amplifier, and are configured for constant output regardless of fader position when using the front and rear inputs. If you are driving the amp with high-level signals, the RCA outputs are automatically attenuated by 12 dB when the input level switch is in the high position. 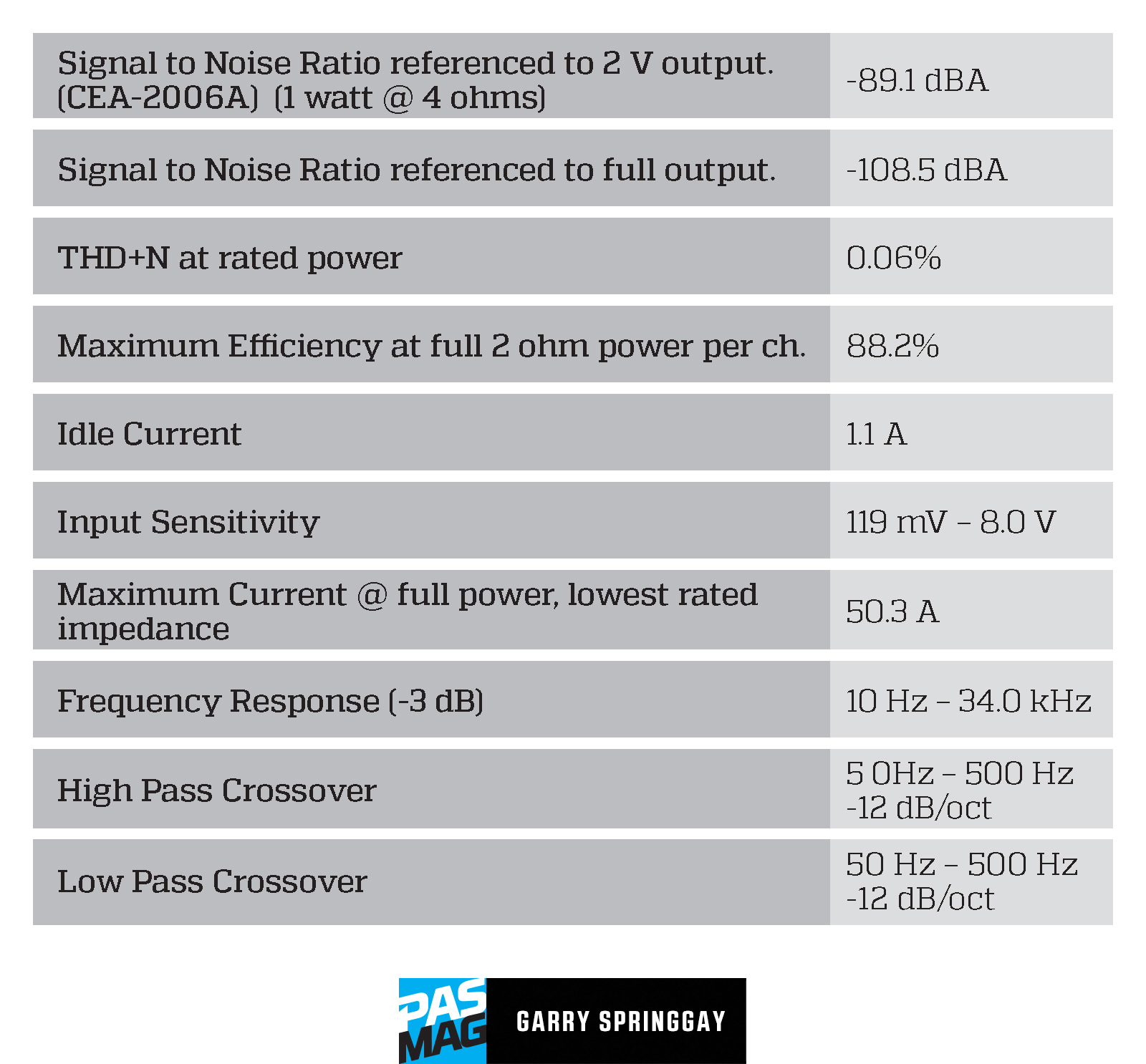 The heatsink of the RD400/4 is made of a cast aluminum alloy and trimmed with rugged-looking plastic bits. A top cover protects all the top-mounted adjustable controls and is removed via two hex head screws. In typical JL fashion, the round logo is left unattached, and can be installed in the appropriate orientation for the installation. A cool high-tech-looking amp status LED array lets you know the status of the amplifier and lights up in a medium blue color when all is functioning correctly, or bright red if there’s an issue. The connections are all made on the front edge of the amplifier, and the terminals all fit flush with the chassis. There are no protruding terminals and nothing that could be accidentally shorted. The result is a clean and electrically safe installation.

I installed the RD400/4 in my labs reference system with the front channels connected to my reference speakers and the rear channels bridged to a 12-inch four-ohm woofer. I left the front crossover in all-pass mode and set the rear channel crossover to about 80 Hz. Once that was done, I used the directions in the owner’s manual to set the gains. The process was quick and simple, but it’s very dependent on the crest factor in your music, so if you listen to a wide variety of musical genres, choosing the track you use to set the gain is important. JL Audio suggests using a sine wave track recorded at 0 dBfs. 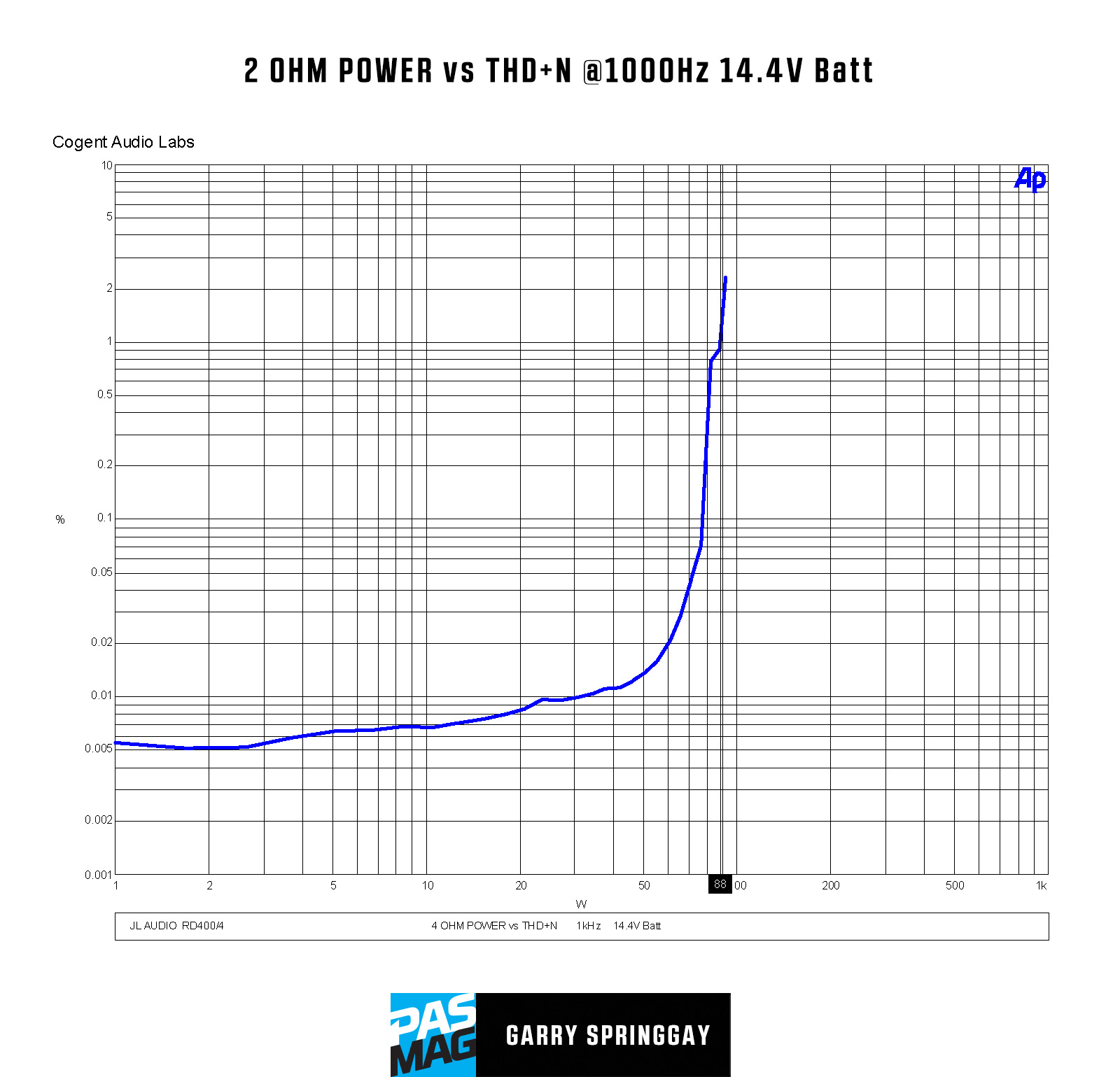 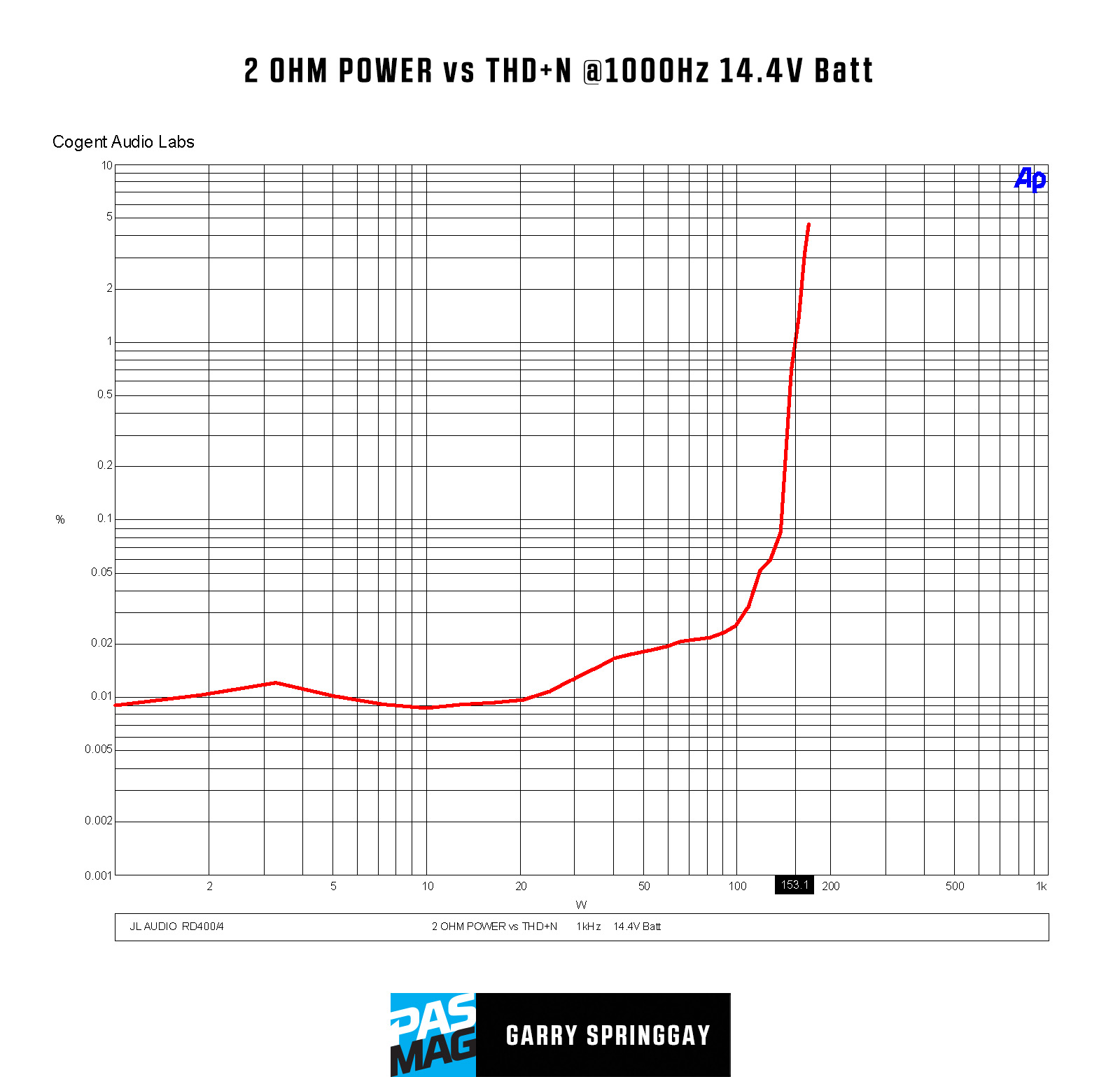 Once adjusted, the sound quality is excellent. Using the most revealing tracks from Spies and several other Sheffield Lab recordings, the RD400/4 proved it could reproduce the detail and articulation captured in these fantastic “live to two-track” recordings. Power output was prodigious and seemed quite effortless. Even at high volume levels, I never had a sense of reaching the amp’s limits or making it really work hard. Bass output was strong with tight, well-behaved output, and always provided a sense of authority. I listened to it for a couple of hours, and even though I was giving my loudspeakers quite a workout, the amplifier barely got more than warm to the touch. 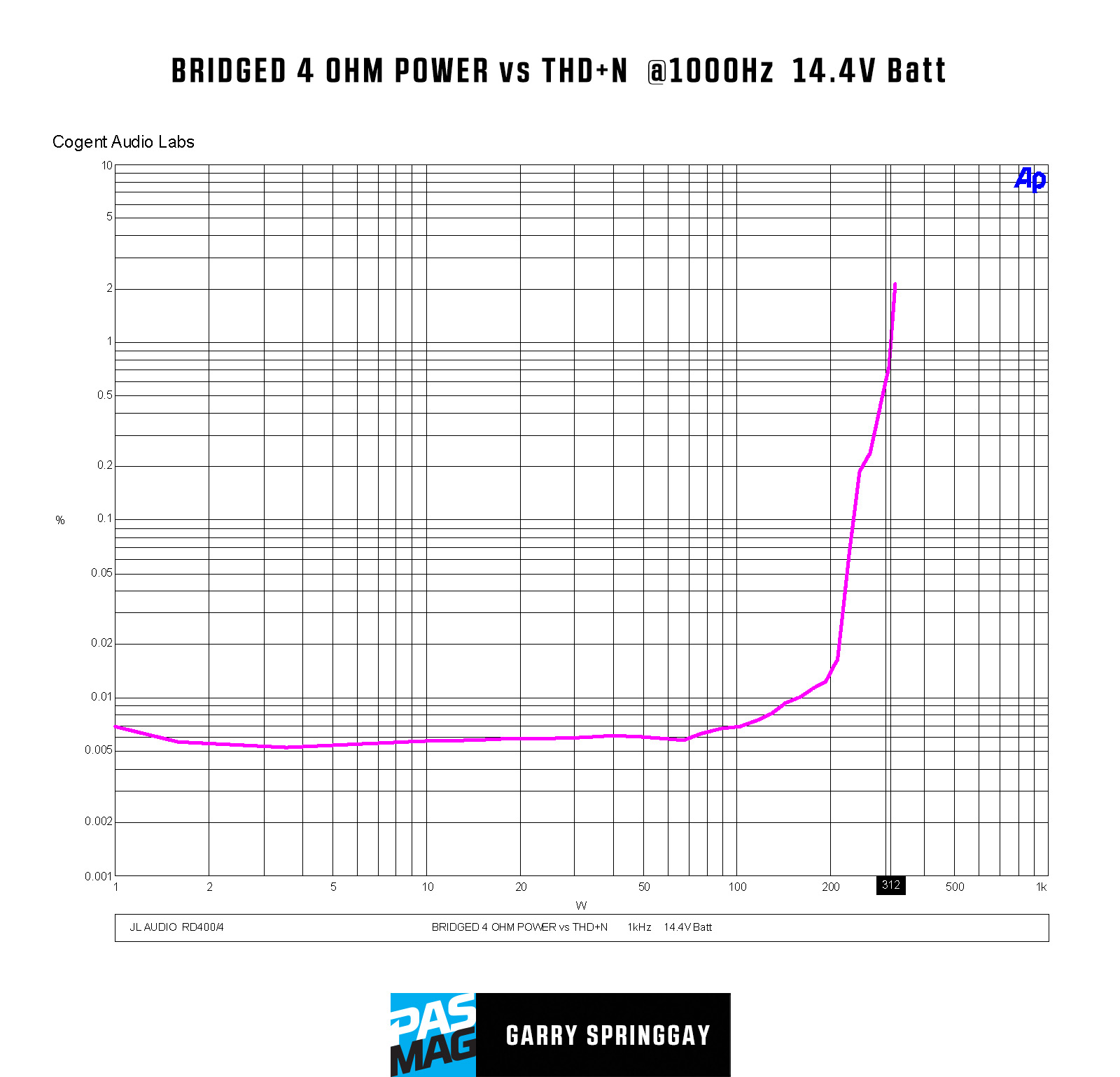 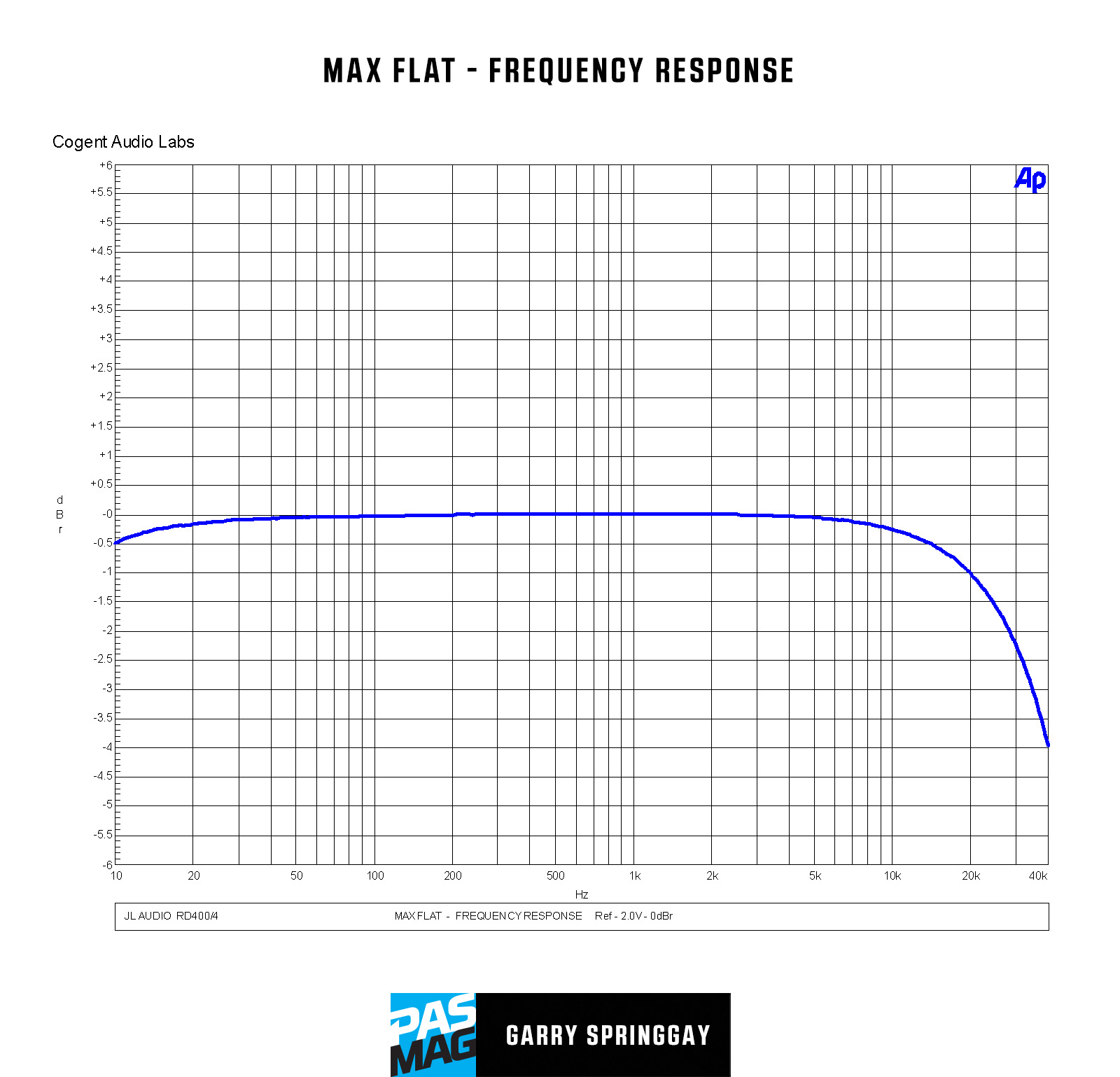 On the bench, the measurements backed up what I had heard the day before. The amplifier easily surpassed all of its published specifications, with low distortion and an inaudible noise floor. Crosstalk and Common Mode Rejection also measured top notch, and when I did bad things to it, the amp simply protected itself until I corrected the problem. 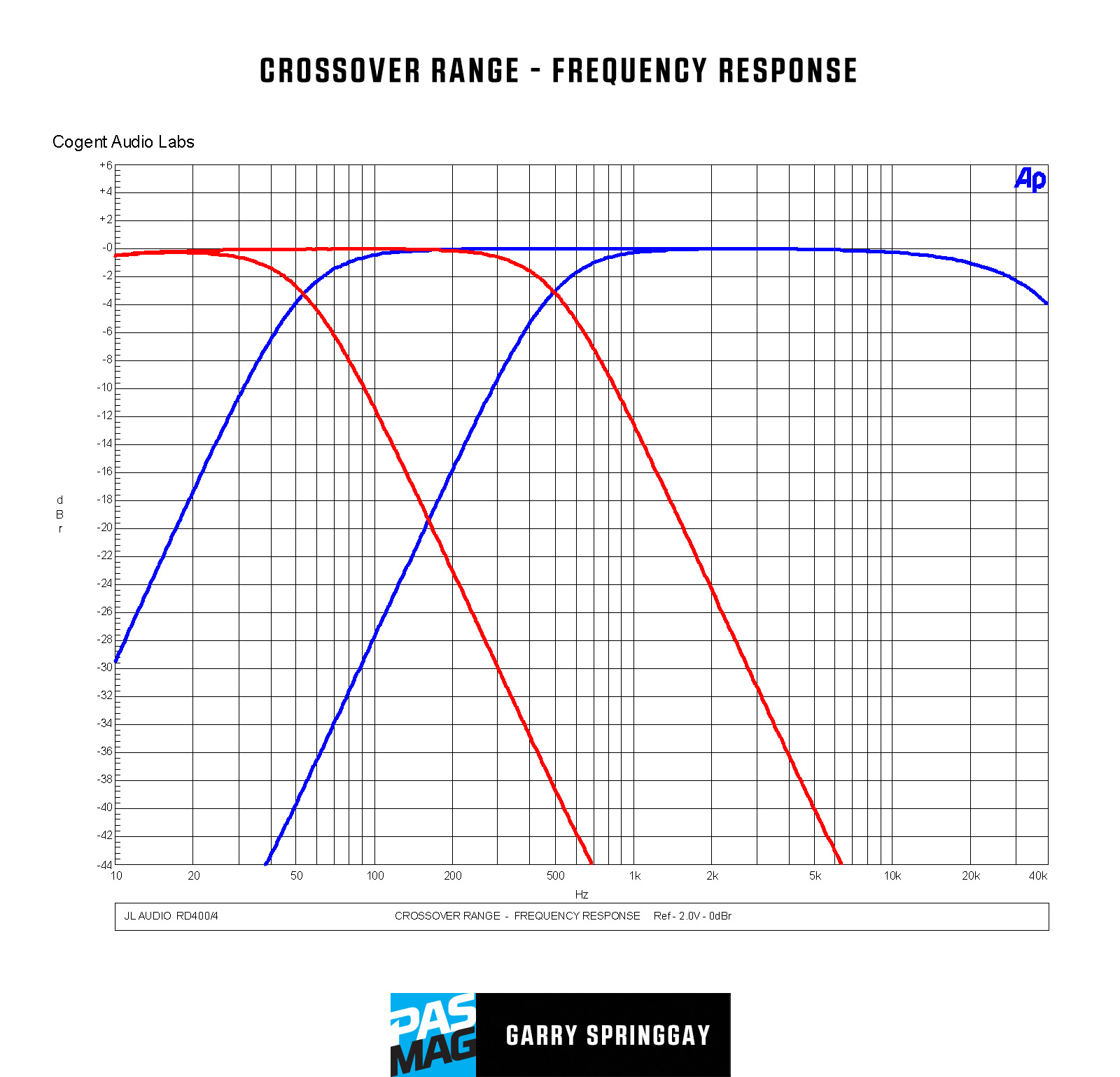 For an amplifier that is priced in the middle of the product range, the JL Audio RD400/4 is an impressive bit of kit. With a U.S. retail price of just $299.99, this amplifier is one of the best thought out products to come across my bench in a while. Thanks in no small part to the years of car audio experience and the ability to exploit today’s high speed device technology, the JL Audio RD400/4 is a solid audio performer wrapped up in a box of common sense. 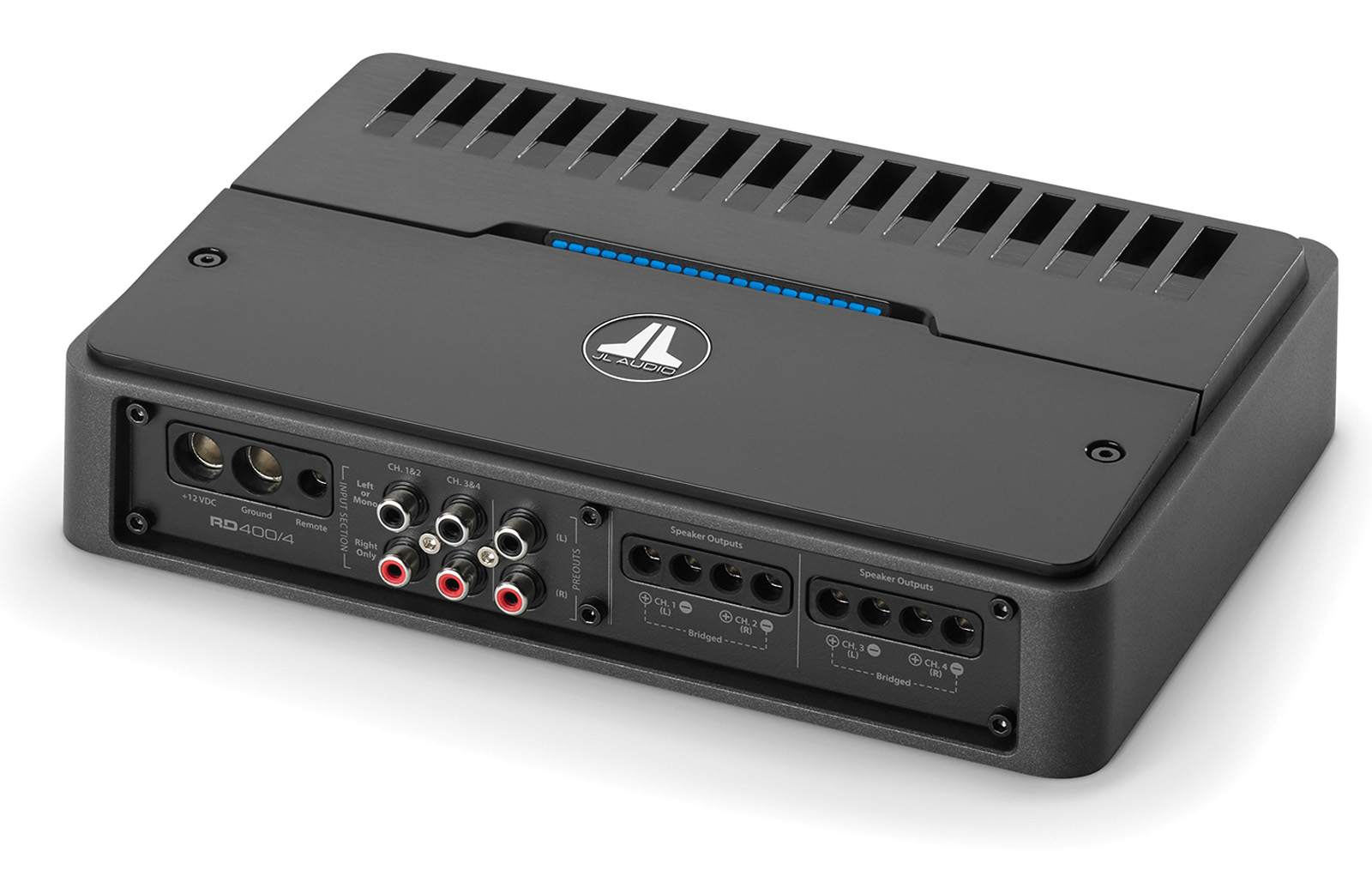