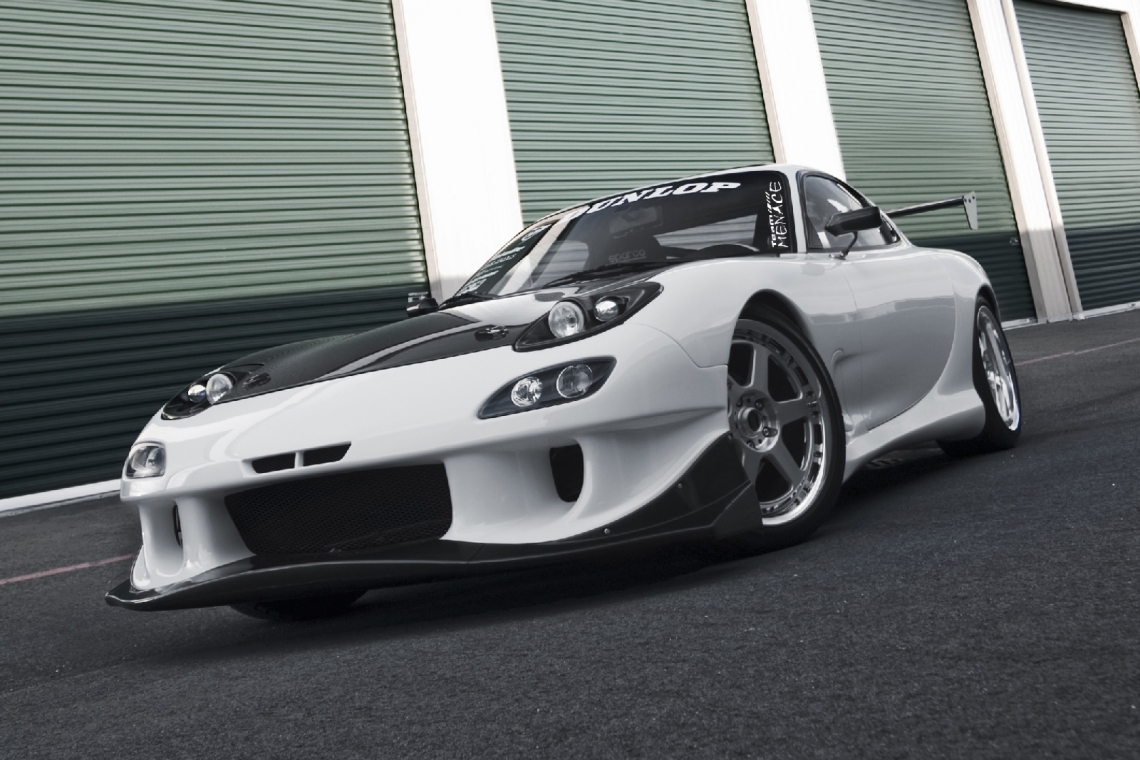 No matter how many third-generation Mazda RX-7s I come across, it’s tough not to take a deep sigh and daydream about what I could do with one. It’s arguably the sexiest vehicles to come out of the Pacific Rim and has the performance to back it up. Let’s not forget to mention the widespread availability of aftermarket parts for the FD3S, making it one of the most sought-after vehicles on the market. However, a new RX-7 hasn’t been available in North America for over 11 years and it has become increasingly difficult to source one worth purchasing. Victor Joe is the creator of this particular Mazda RX-7, which is a prime example of what a modified rotary is all about.

Hailing from the Seattle, WA area, Joe is no stranger to the tuner scene. The Pacific Northwest’s close proximity to the Land of the Rising Sun means easy access to parts, especially those JDM goodies that are notoriously tough to find. This FD is a testament to JDM junkies everywhere, as evidenced by its laundry list of performance and styling modifications. 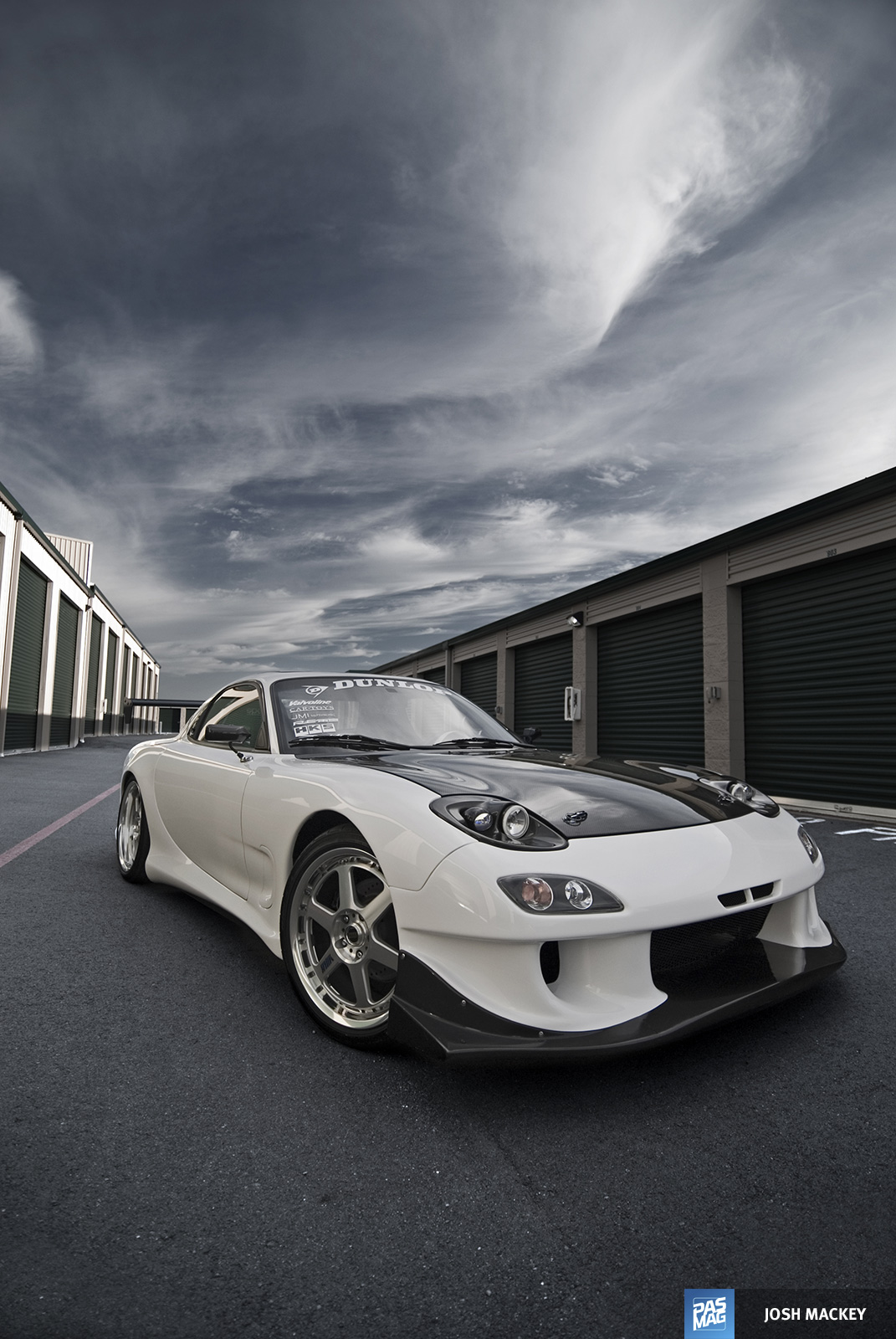 Starting with the exterior, the RX-7’s bodylines went from sweet girl-next-door curves to bodacious porno-star booty courtesy of an ultra-rare RE Amemiya N1 body kit. With both the rear and side skirts moulded onto the body, the front bumper and matching carbon diffuser give the car a Super GT persona almost unfit for the street. A set of hand-crafted fenders add a J-Lo touch to the rear end, while the entire vehicle was sprayed with a custom White / Blue Pearl finish.

To many, the factory pop-up headlights of the RX-7 look dated, so Joe replaced them with the popular C-West headlight conversion. The USDM taillights didn’t make the cut either, as a set of JDM round taillights sit in their place. A C-West carbon fibre GT wing resides atop the trunk and no doubt keeps its plump butt in place, while a pair of Craft Square carbon fibre GT mirrors helps Joe see who he’s just passed. To help cut down on drag, he shelled out the funds to affix the RE Amemiya carbon fibre diffuser to the rear. A pair of FEED carbon fibre door handles is the perfect addition to accent the rest of the carbon fibre-clad exterior. 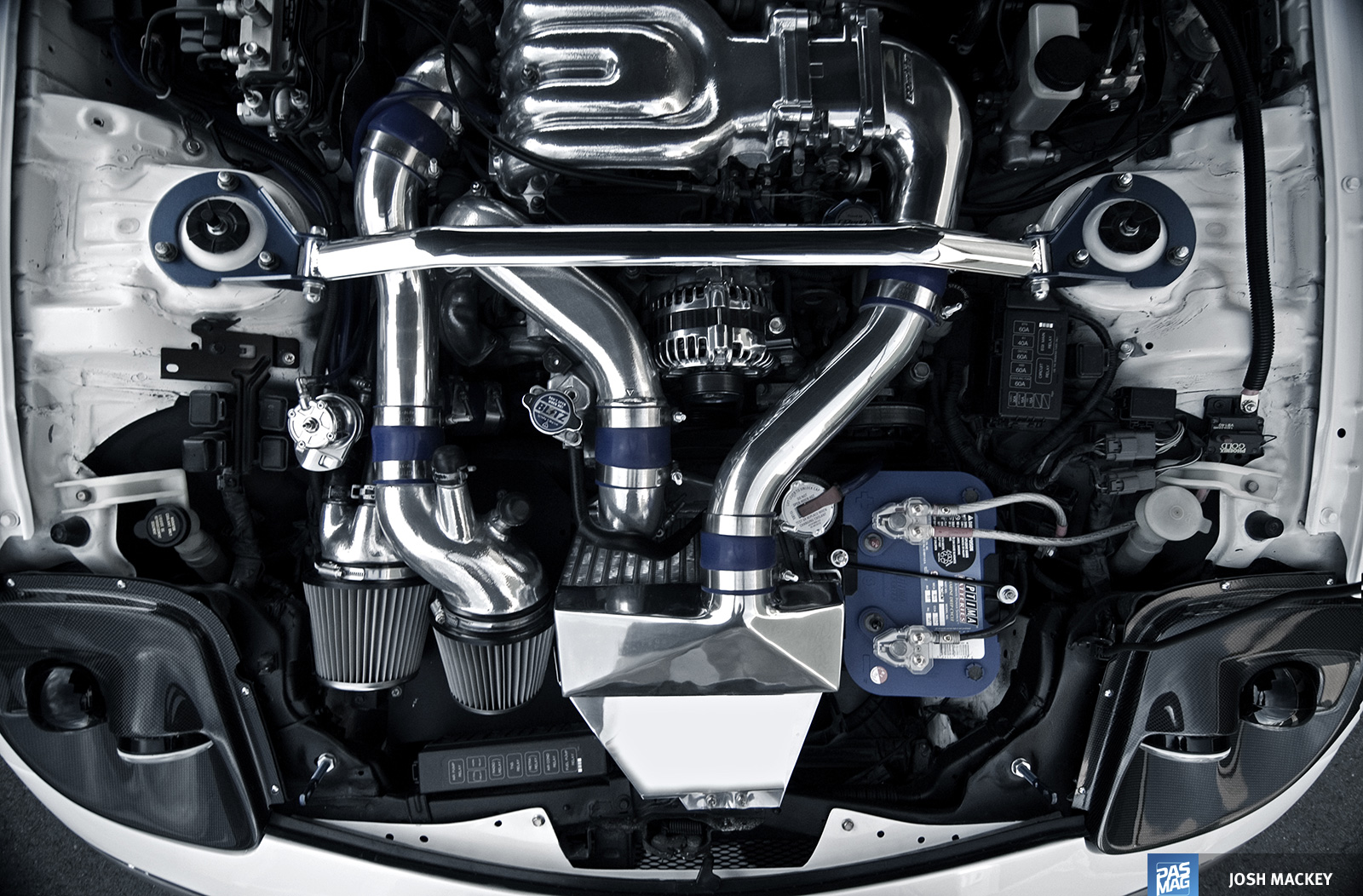 Beneath the lightweight OE-style carbon fibre hood lives the legendary 1.3L 13B-REW rotary powerplant. However, this particular version bears little resemblance to the Mazda original, as it has been equipped with a number of products that really push the performance envelope. Though Mazda offered the vehicle to consumers with a twin turbo system that helps the motor to produce 255hp, Joe’s power goals were far beyond what the factory gear could support. So he had both the upper and lower intake manifolds ported and ceramic coated, and dumped the Mazda twins in favour of a pair of Pettit Racing Hybrid Hi-flow turbochargers. A large GReddy front-mount intercooler fills in the space in the front bumper and is plumbed into the system using matching piping. A Blitz blow-off valve helps regulate boost levels, while a dual-core radiator does its best to keep the motor cool.

On the cool side, a Blitz Dual Core intake system pulls ambient air into the system, while a GReddy intake elbow provides a smooth path into the motor. The combusted mixture follows an HKS down-pipe through a Bonez high-flow catalytic converter and HKS carbon / titanium exhaust system.

A GReddy lightened pulley kit helps free up every last ounce of power, while an AFR fuel pressure regulator and Cosmo fuel pump keep the notoriously thirsty 13B satiated like Michael Jordan on Gatorade. The entire system is controlled via a Pettit Racing ECU that has been tuned to optimize Joe’s engine modifications.

With power production taken care of up front, it was essential that the drivetrain was tweaked to properly transfer it to the rear wheels. This particular RX-7 has been upgraded with the addition of an Exedy Hyper Single clutch and Mazdaspeed lightened flywheel. An Rotary Performance 4.33 final drive gear helps improve acceleration, while an RP carbon driveshaft reduces rotational mass. 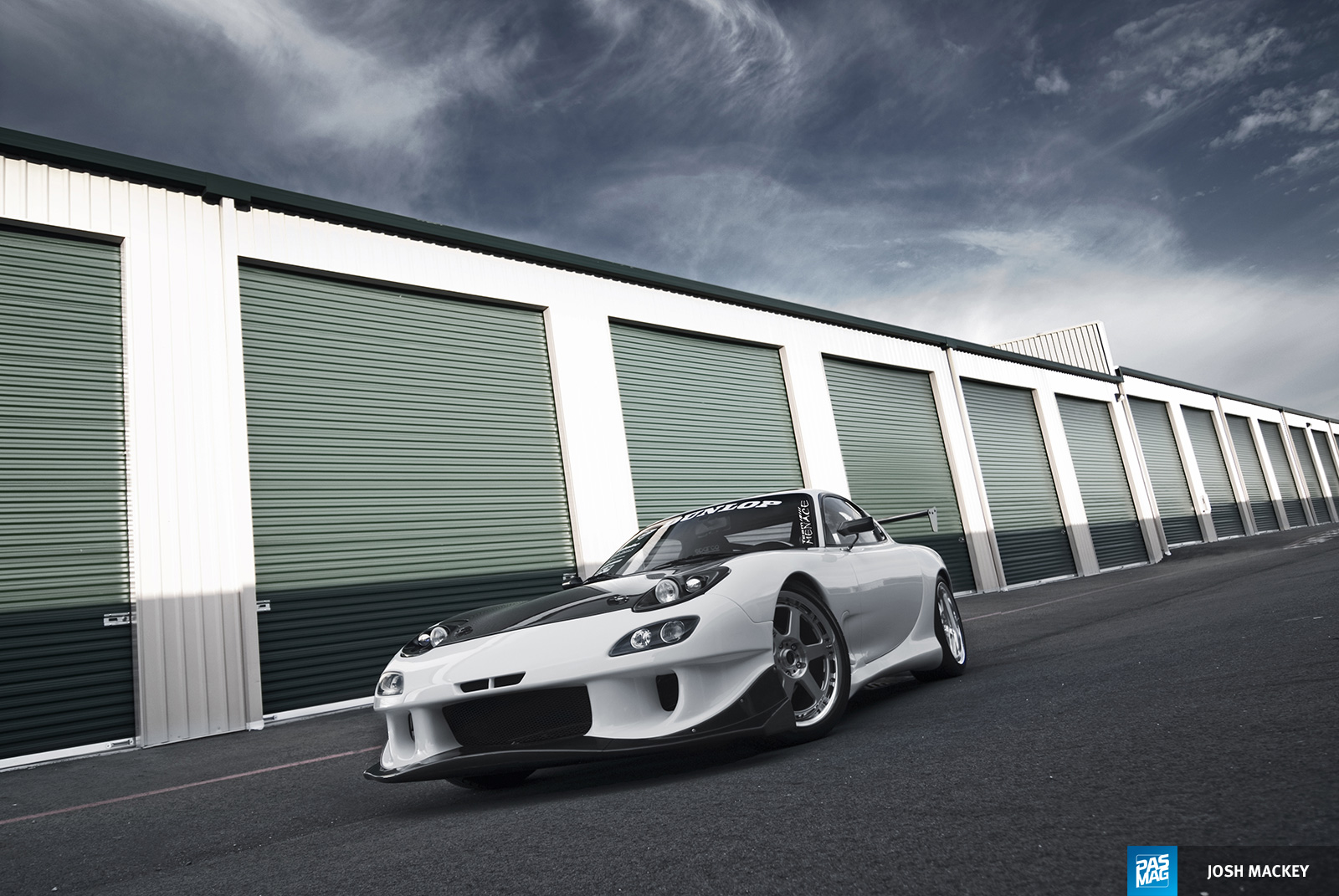 Making sure that all this power is being used properly is a modified suspension featuring a set of TEIN HA coil-overs. With 16 levels of damping adjustability, the HA is more than enough for Joe’s use on the street and occasional track day. Actually, the damping on the HA can be set as stiff as the one on TEIN’s N1 endurance race car! The RX-7’s chassis adds some much-needed rigidity thanks to Cusco strut braces in the front and rear.

Sporting a set of Volk Racing wheels on your ride is like rocking a swoosh on your sneakers, and Joe went for the ‘Air Max’ of rollers with the addition of 18-inch GT-P wheels. Measuring 8 inches in width up front and 10 inches in the rear, these bad boys lay down a mean footprint thanks to the 225 / 40 and 275 / 35-sized Toyo RA-1 tires. Brembo cross-drilled rotors, Metal Matrix brake pads and Goodridge steel-braided lines all around give Joe the confidence to really push the limits of the RX-7. 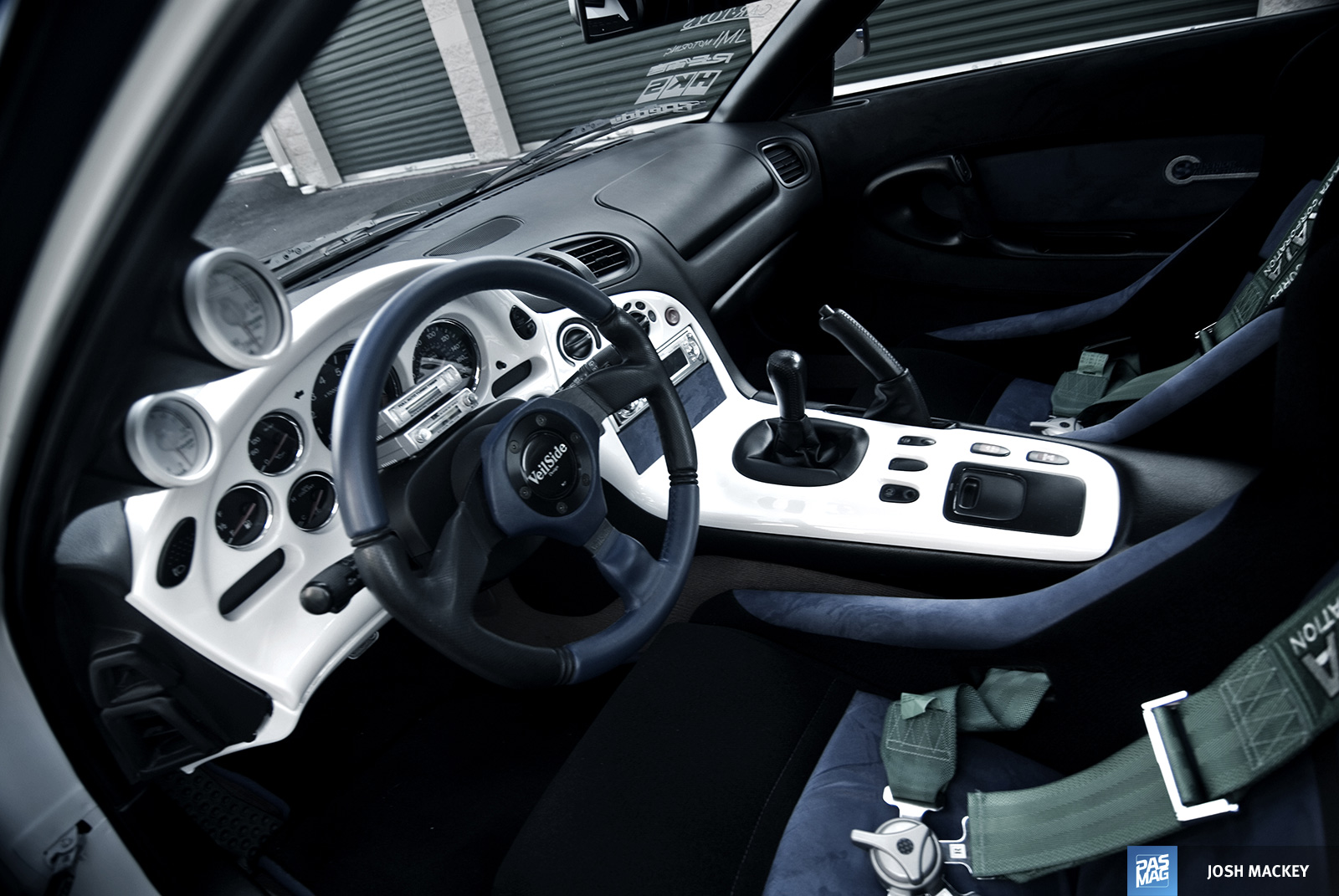 With Joe looking to use the vehicle for street use, he decided to keep much of the interior intact. However, Sparco Speed seats and Takata four-point harnesses were added to keep him and his lucky co-pilot in place, while a VeilSide steering wheel and shift knob give the interior a nice JDM touch. To complete the JDM-inspired ride, Joe installed a Cusco five-point roll cage to bring added chassis strength and safety. 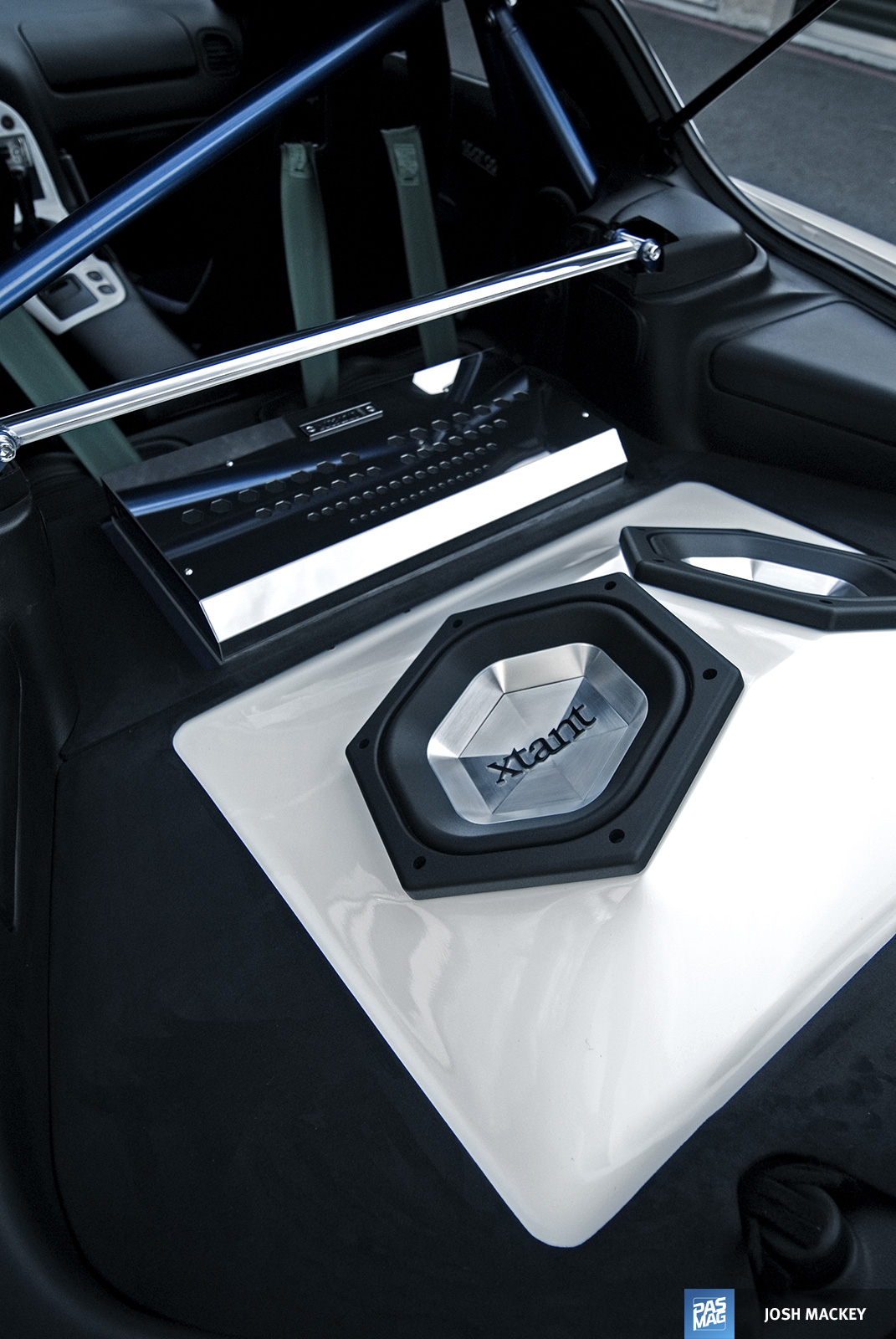 Tunes are provided by a Panasonic head unit which sends the signal to the Xtant 603 amplifier. Focal 130CA 5.25-inch two-way speakers reside in the doors to provide the mids and highs, while a pair of 10-inch Xtant subwoofers is home in a custom enclosure in the trunk.

Though the vehicle is completed, Joe still tries to maintain a low profile. But with an RX-7 this sweet, it’s tough to fly under the radar. The car has already been featured on www.tunerzine.com and with HIN Seattle just around the corner, we fully expect it to gain more exposure in the near future. Thanks go out to Joe for letting us showcase his take on rotary tuning. 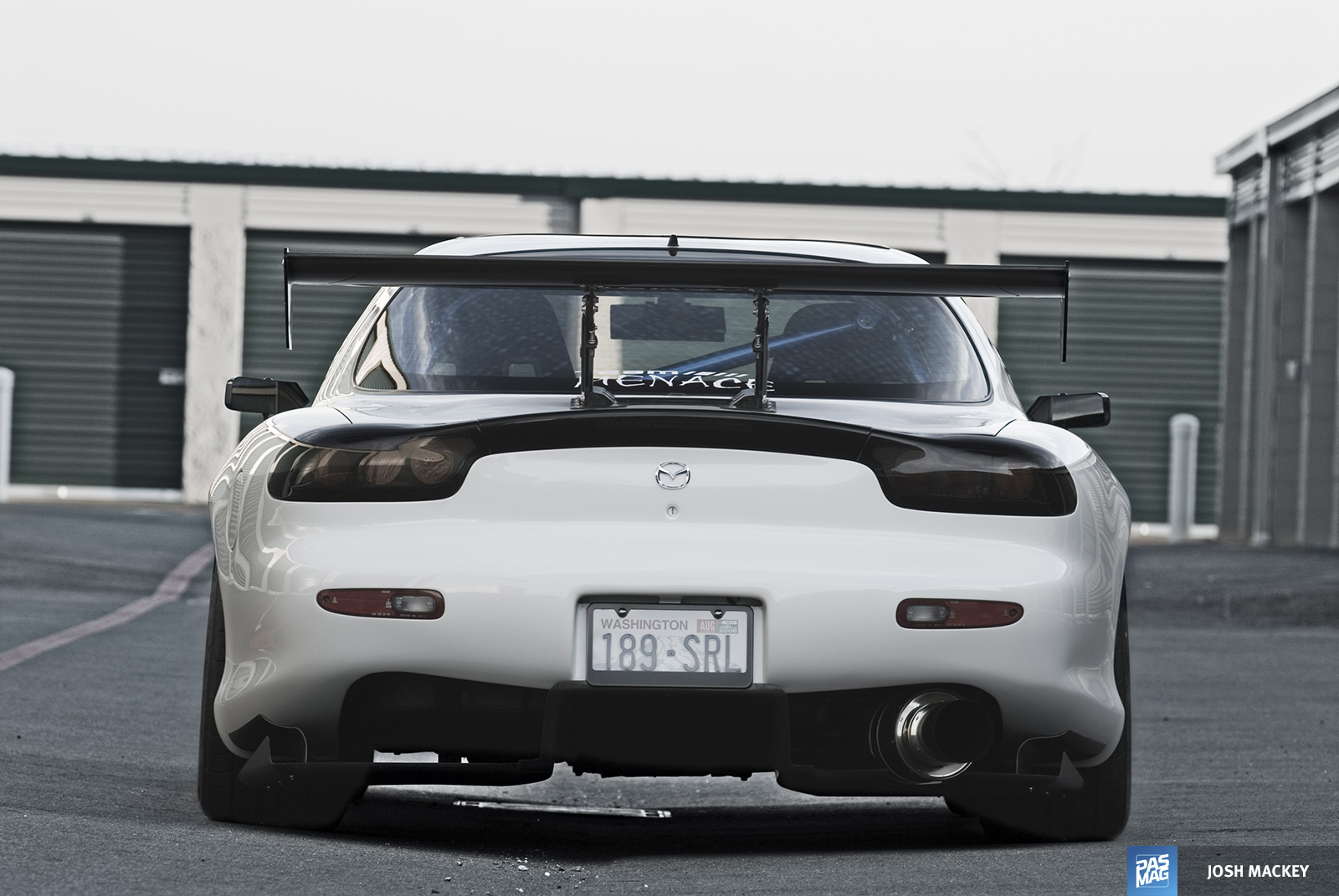 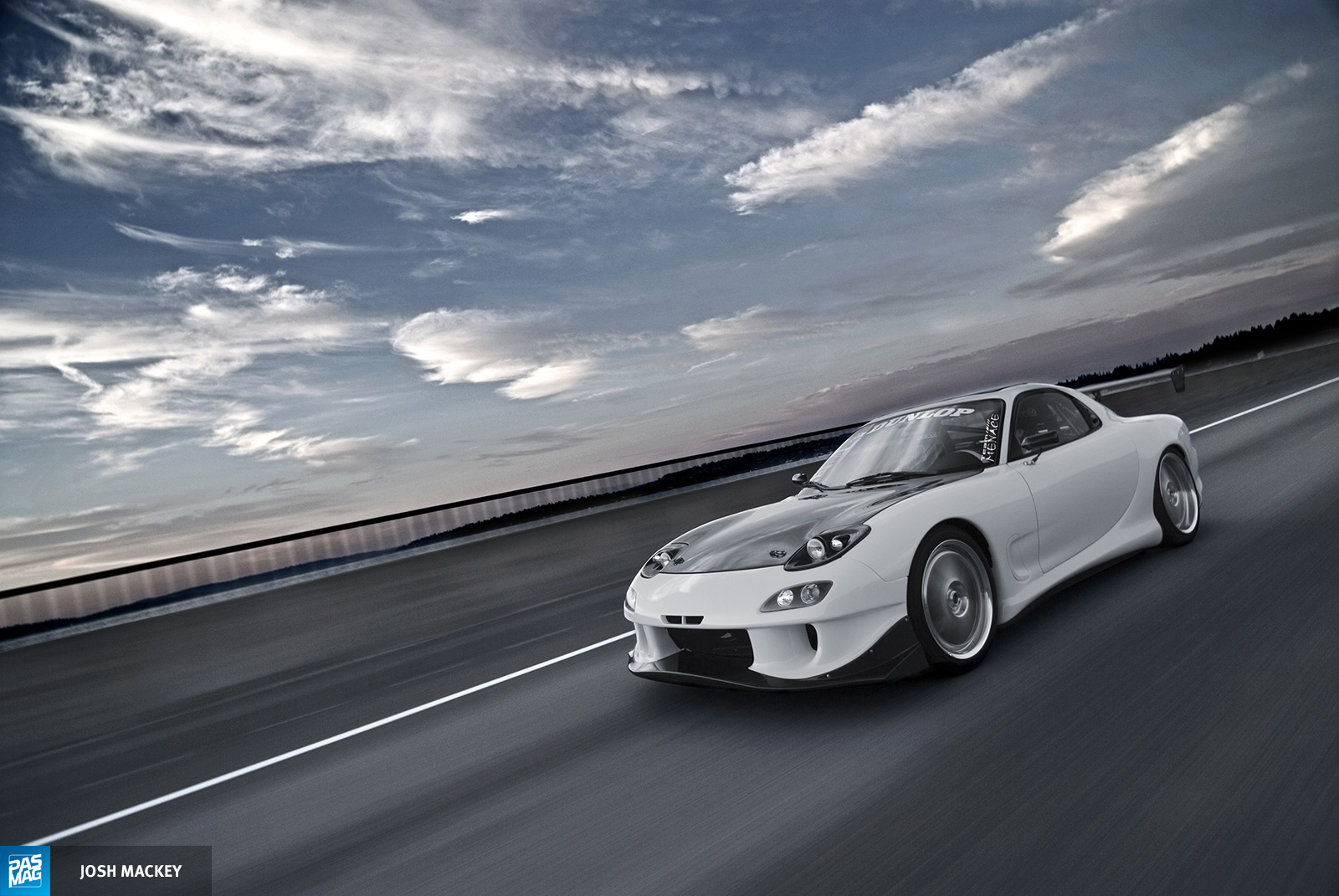 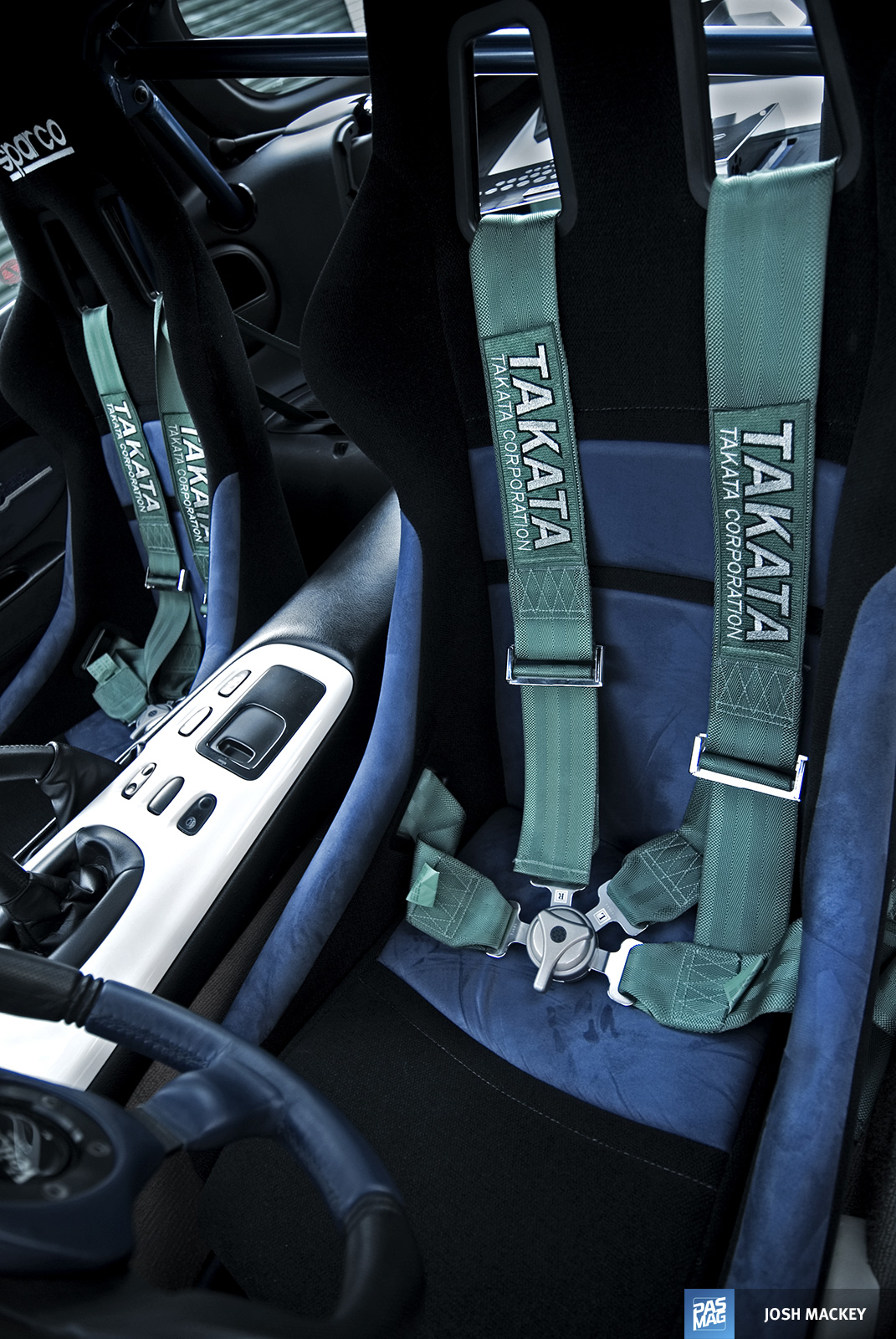 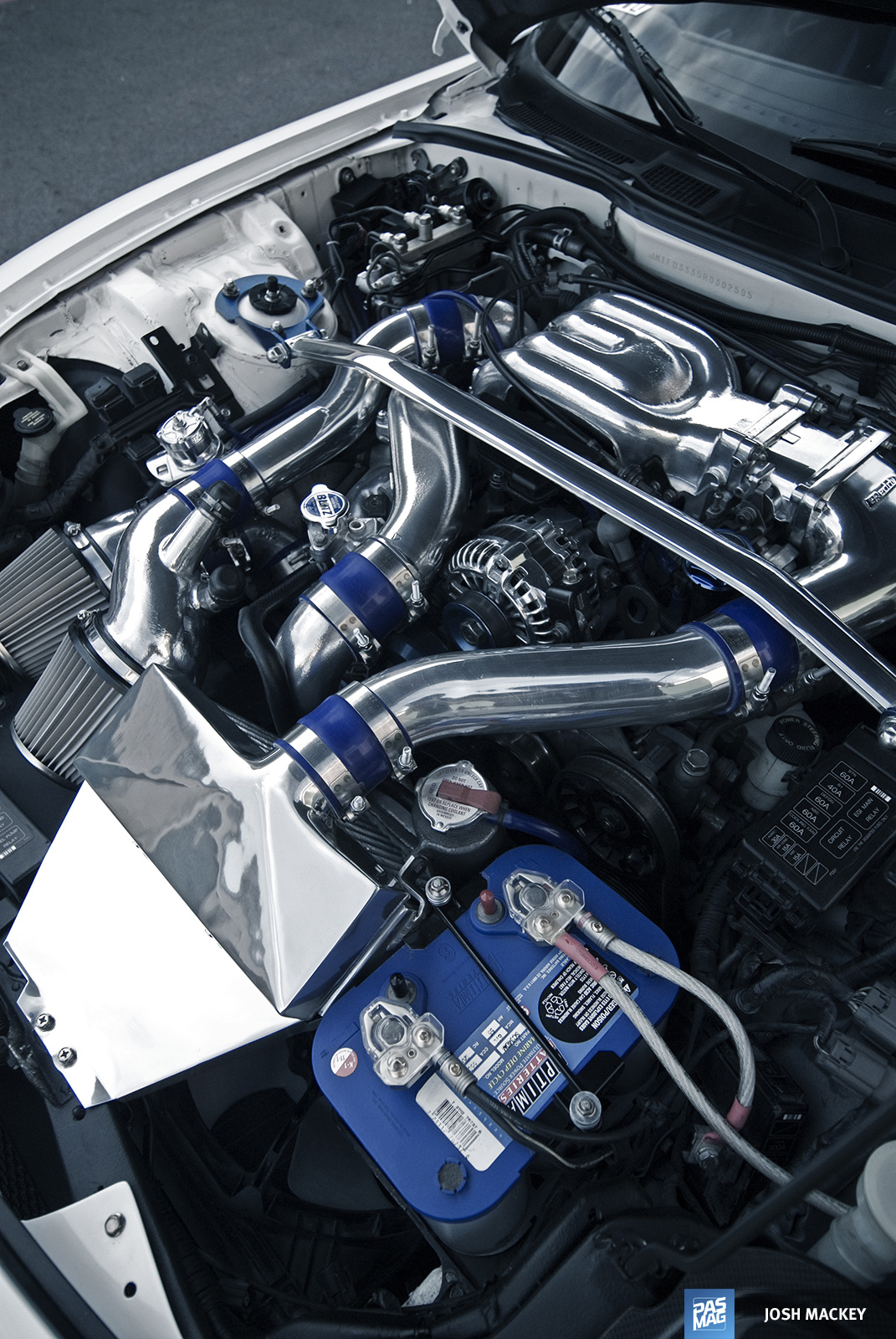 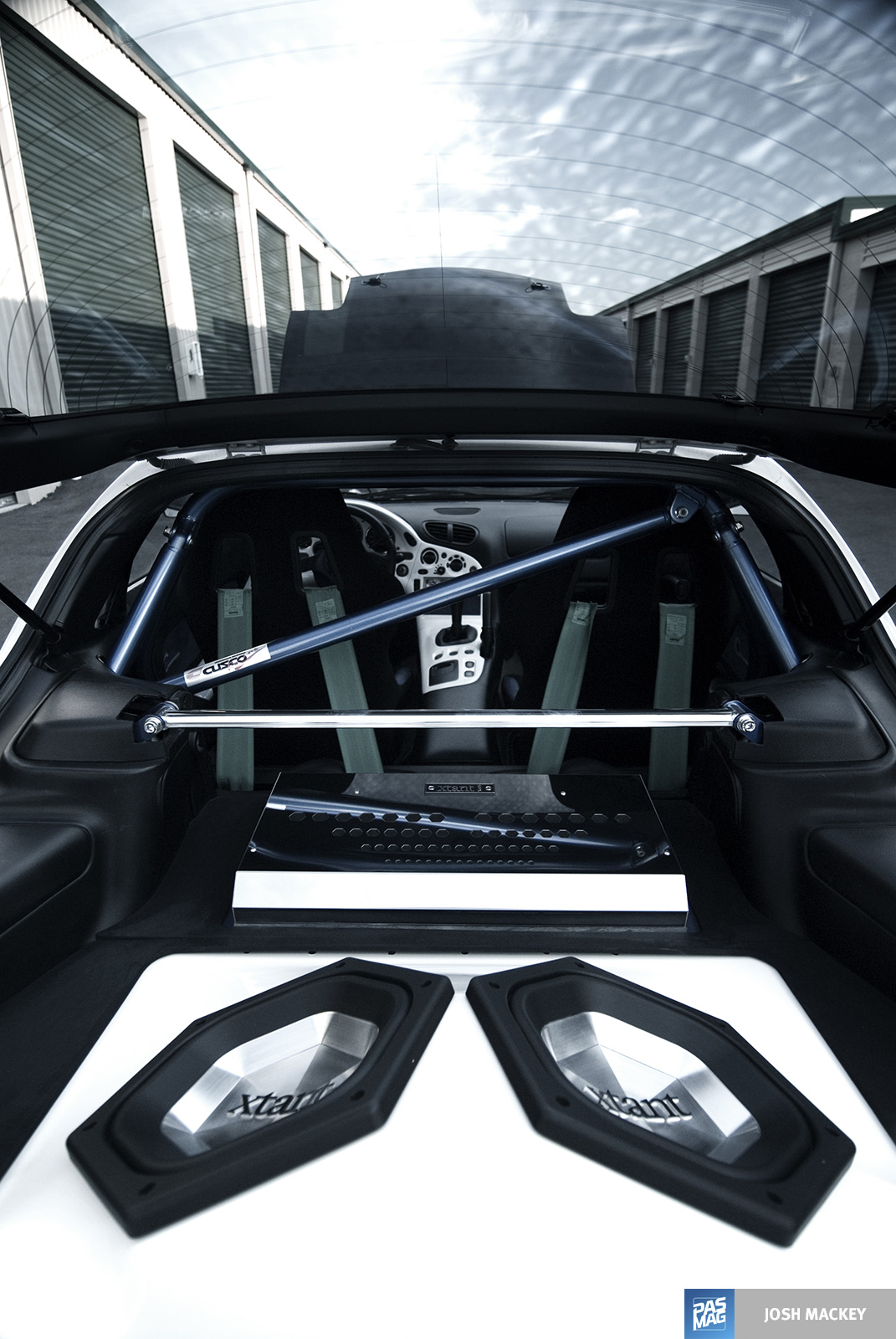 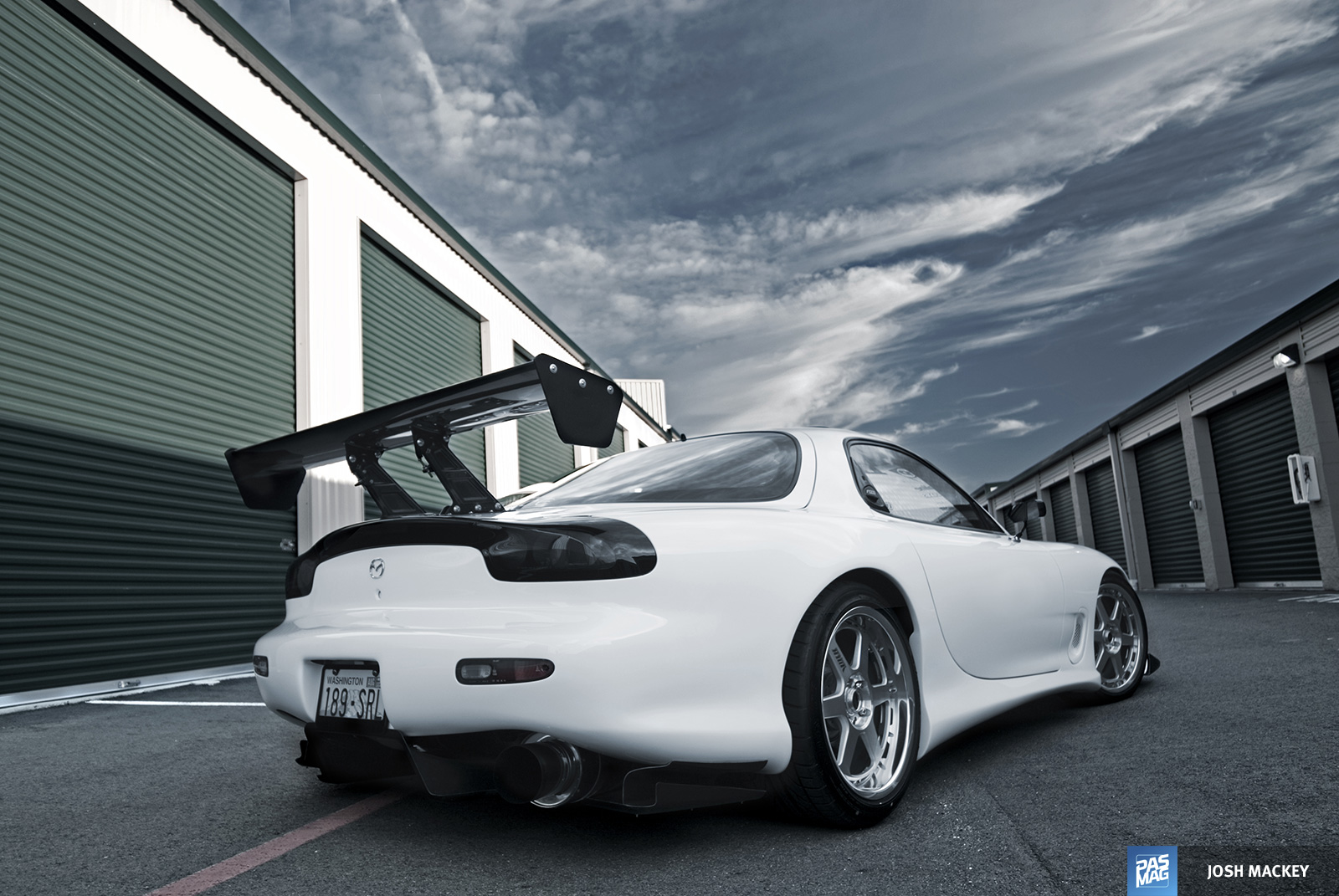 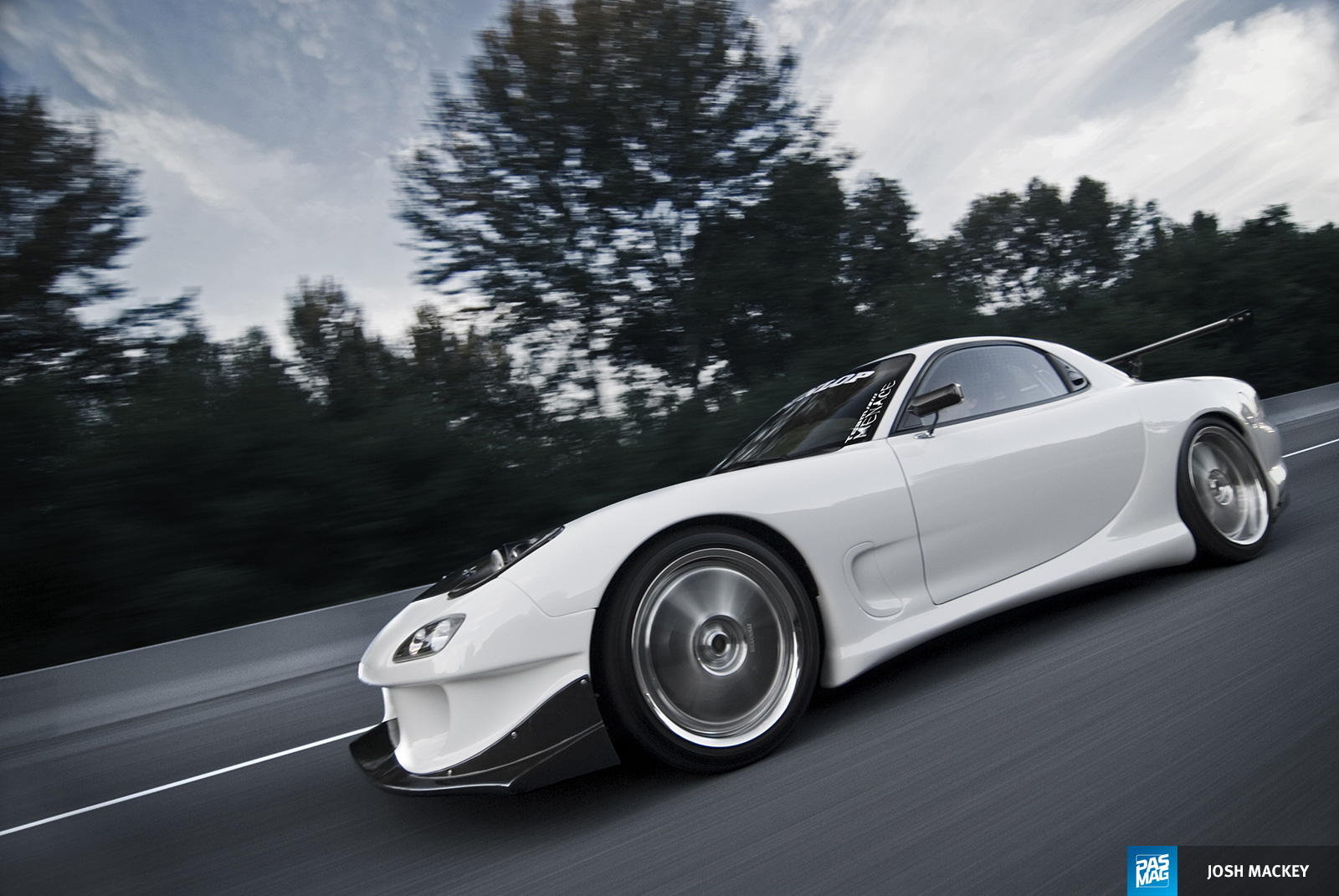 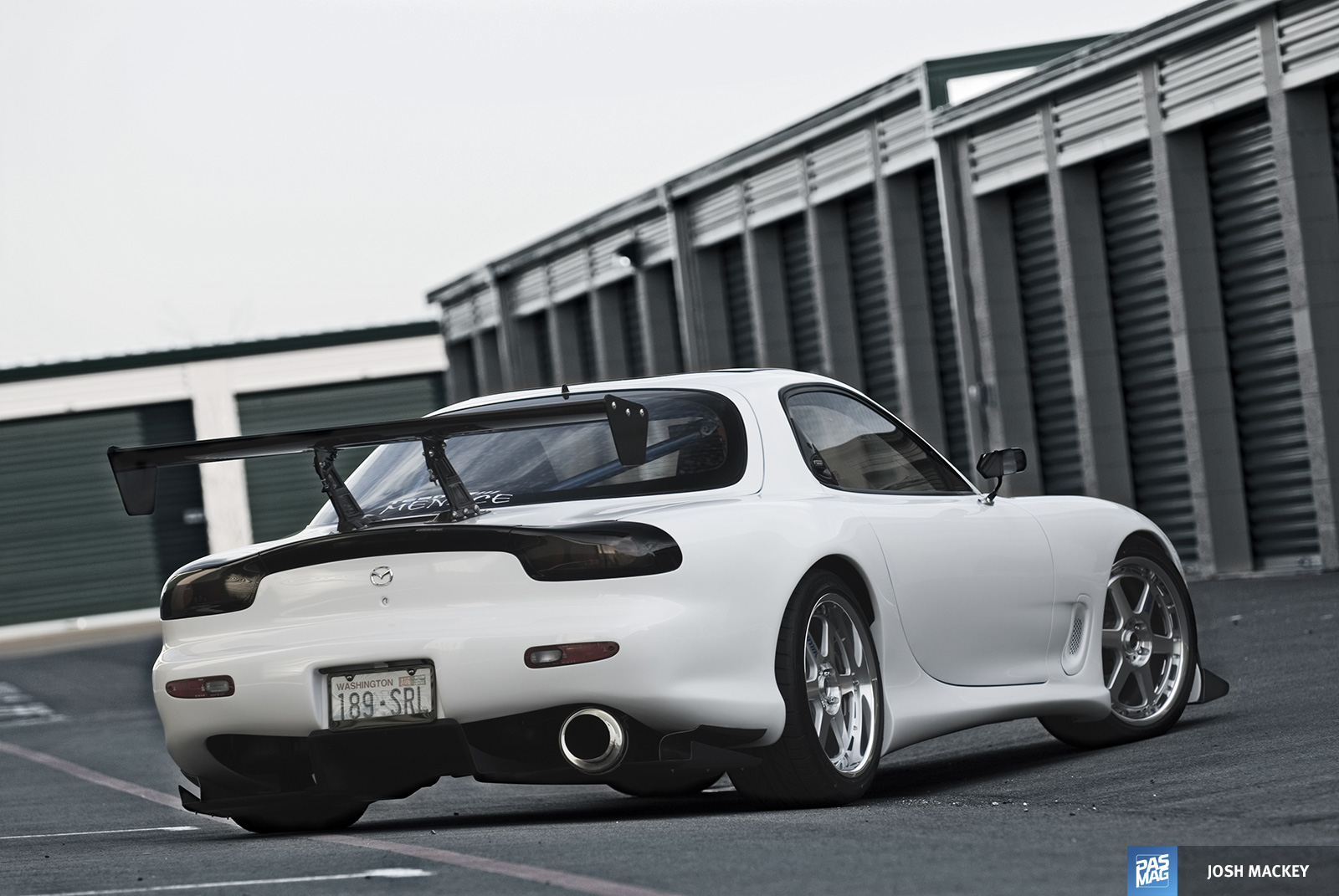 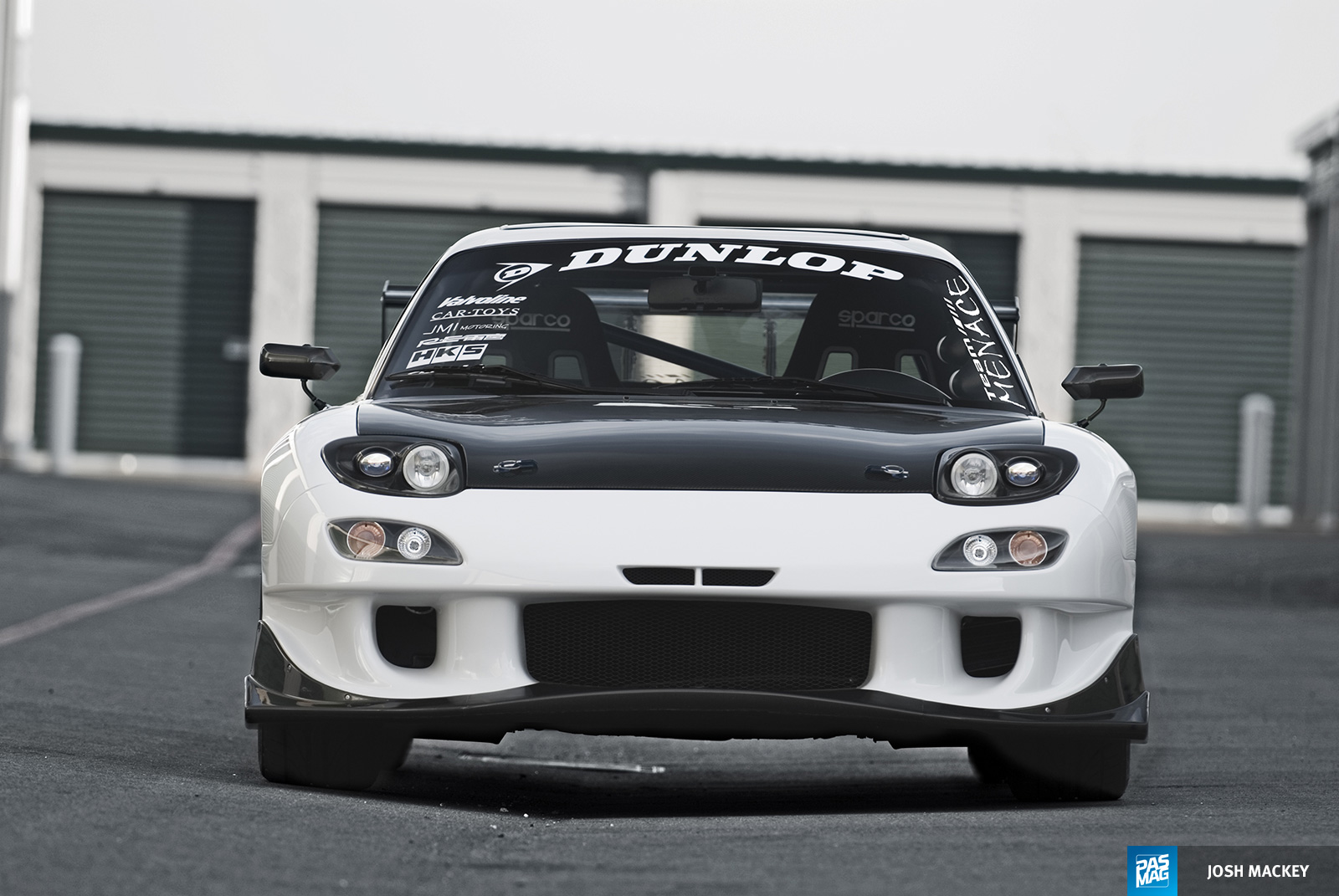 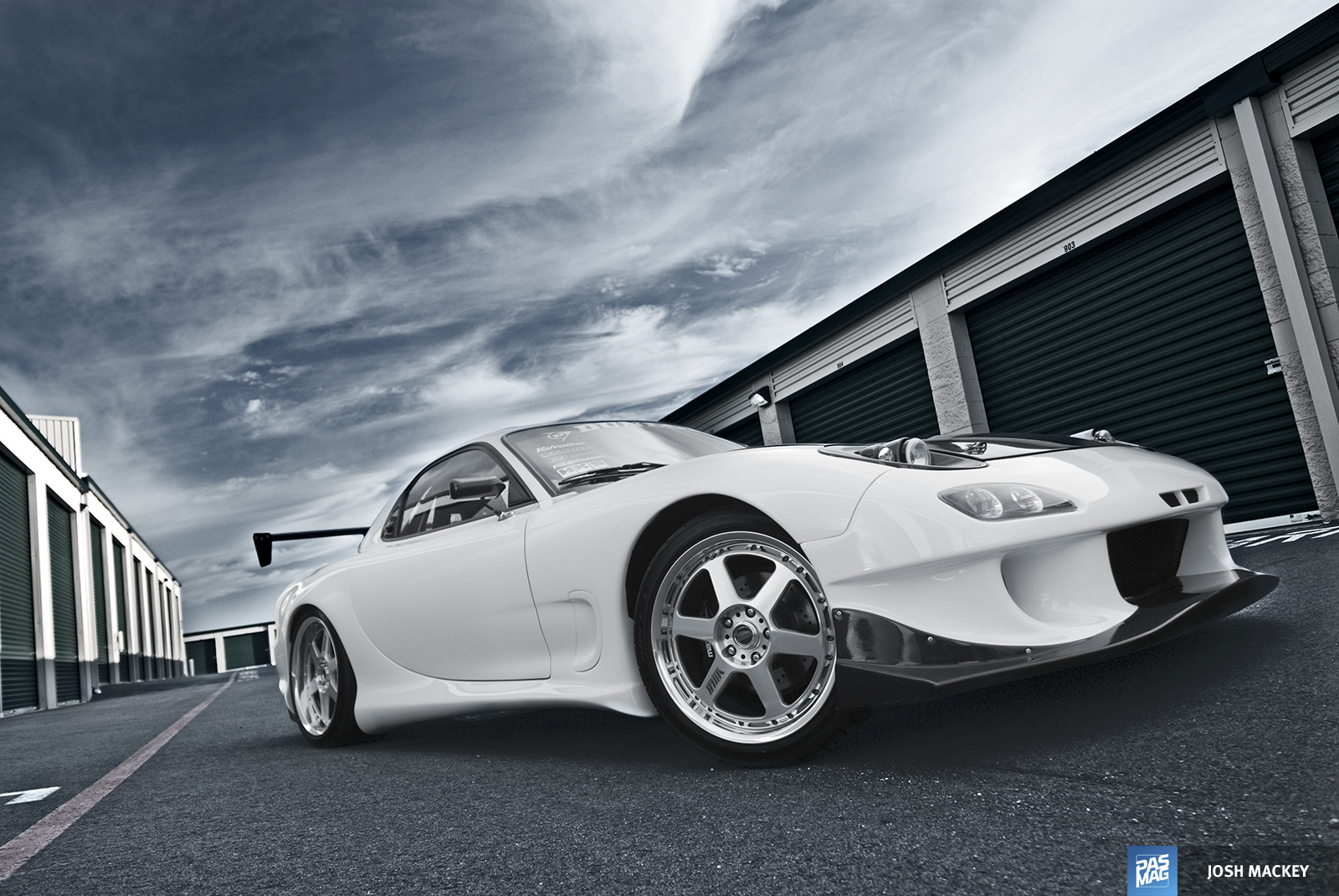