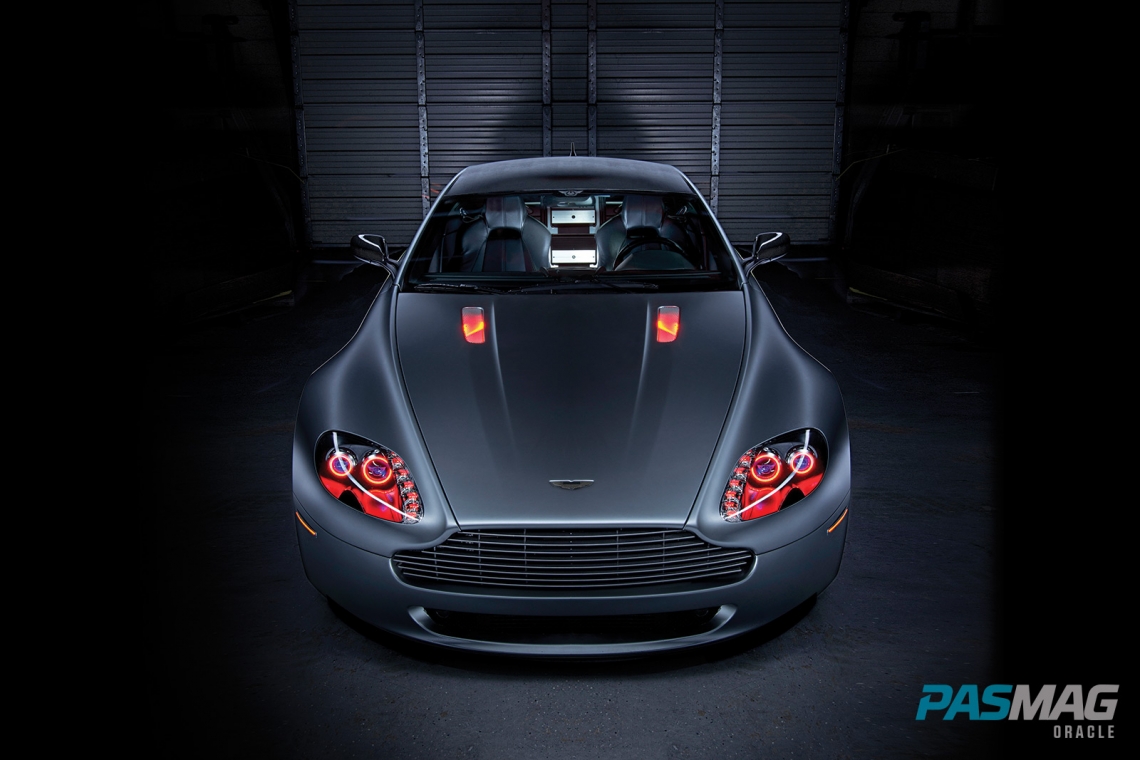 Photos by Oracle and Jason Scott

Choosing the right booth car is one of the most important decisions for SEMA vendors every year. For Justin Hartenstein and his team at ORACLE Lighting, that meant choosing a car that would silence the haters.

After building a Ford, a Chevy and a Mopar for the previous three consecutive SEMA shows, show goers continued to ask why they didn’t build (insert car name here), rather than asking about the car itself. Before selecting the Aston Martin for the 2013 show, the goal was to find a car with universal appeal that wasn’t completely over-the-top and unachievable. With the Aston Martin V8 Vantage price point just nominally higher than a fully-optioned GT500 or Z06, it seemed like a great choice.

“We wanted a car everyone can appreciate,” Hartenstein says. “When people see the Aston Martin, there’s a universal appreciation because it’s such a great looking automobile.” Of course, being a car guy at heart, no simple Aston Martin would do. After a bit of research, Hartenstein found out about the ESX SuperVantage, and knew it was the car he needed to be built for his booth at SEMA. 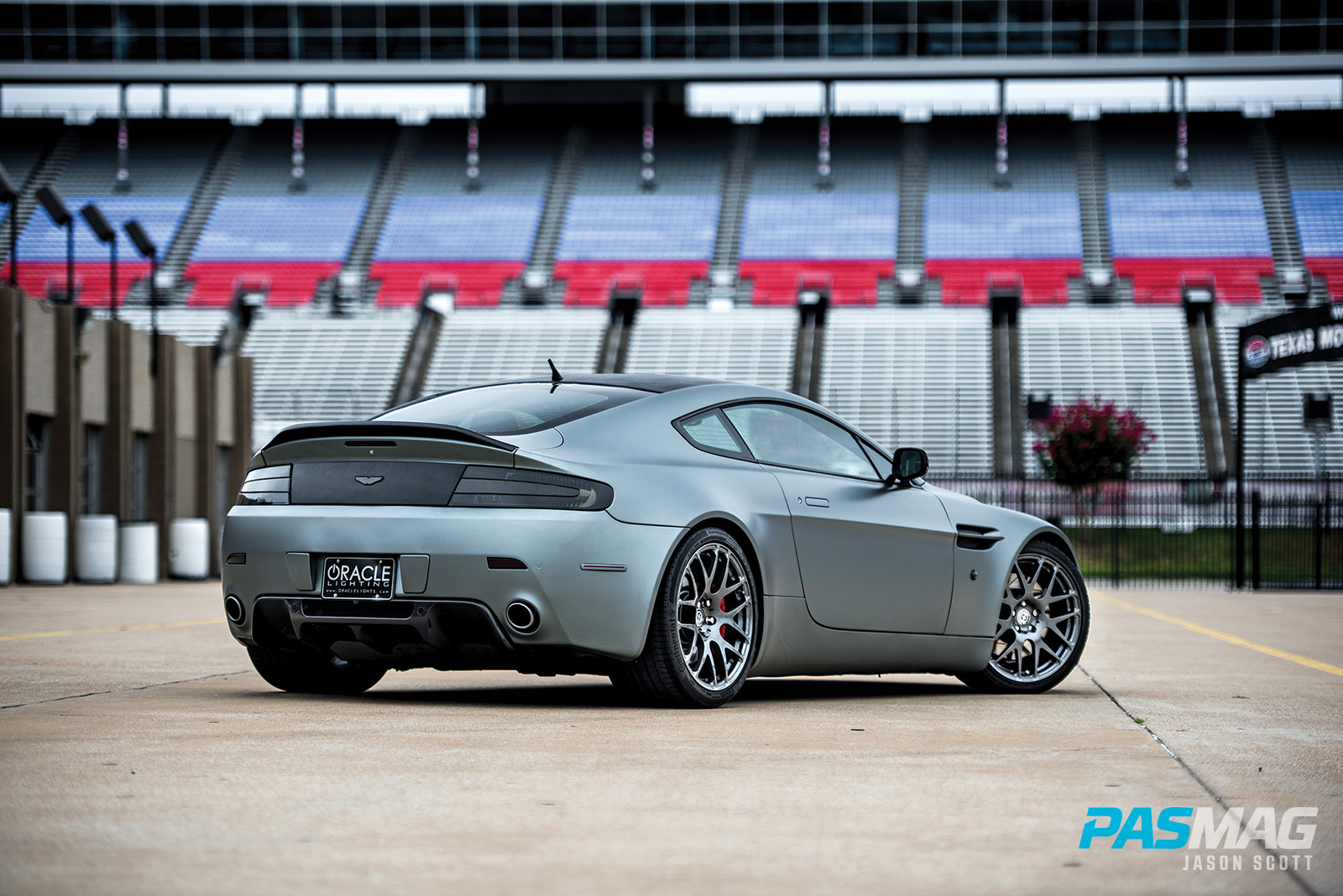 The ESX SuperVantage is a limited edition version of the V8 Vantage built by Ali Afishar’s ESX Productions in Southern California, a company previously known for its Subaru drag race program, which still holds the world record for the quickest and fastest Subaru passes. Making the V8 Vantage into a SuperVantage made Oracle’s car just one of 16 in the world.

What starts with a baseline Vantage V8 platform, it is transformed with a belt-driven supercharger, pushing seven pounds of boost through an air-to-water intercooler and standalone heat exchanger to blast more than 530 horsepower through the rear wheels. A custom tune put together by Osh Minelian from Race Marque Systems is paired with the ESX exhaust to allow the supercharged engine to breathe properly. 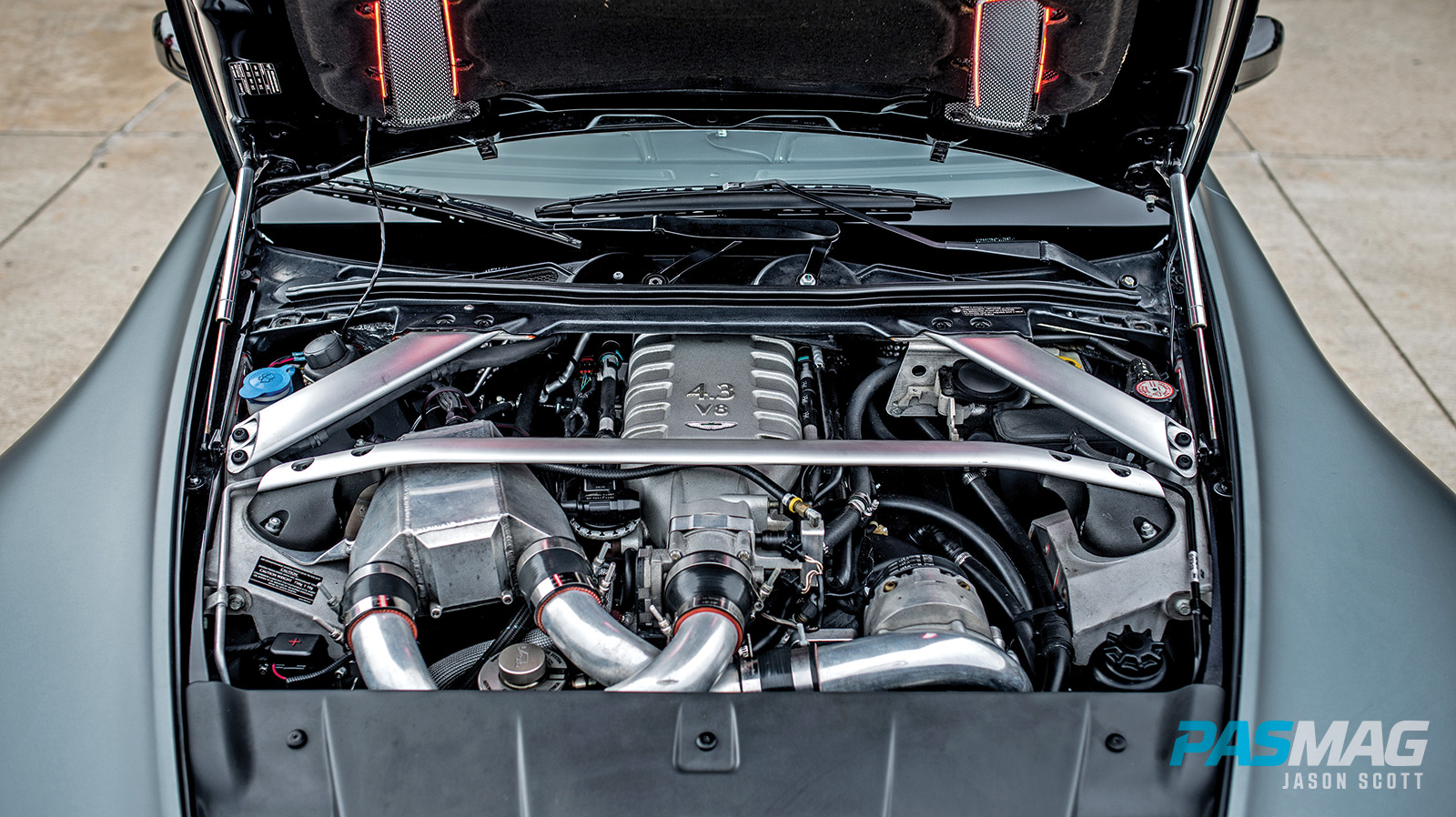 It’s hard to upgrade the looks of the Vantage, but Hartenstein found some select carbon fiber bits to accentuate the OEM lines. A full suite of carbon fiber products from The Vantage Collection has been added, including the chin spoiler, side mirrors, fender vent strakes, rear diffuser and a ducktail spoiler.

A set of charcoal metallic HRE P40 wheels (19x9 in the front and 19x11 in the rear) are wrapped in Continental ContiSportContact tires to give the car a meaner stance and provide better traction for all that extra horsepower. H&R lowering springs also provide a slightly stiffer ride and help reduce squat on acceleration. 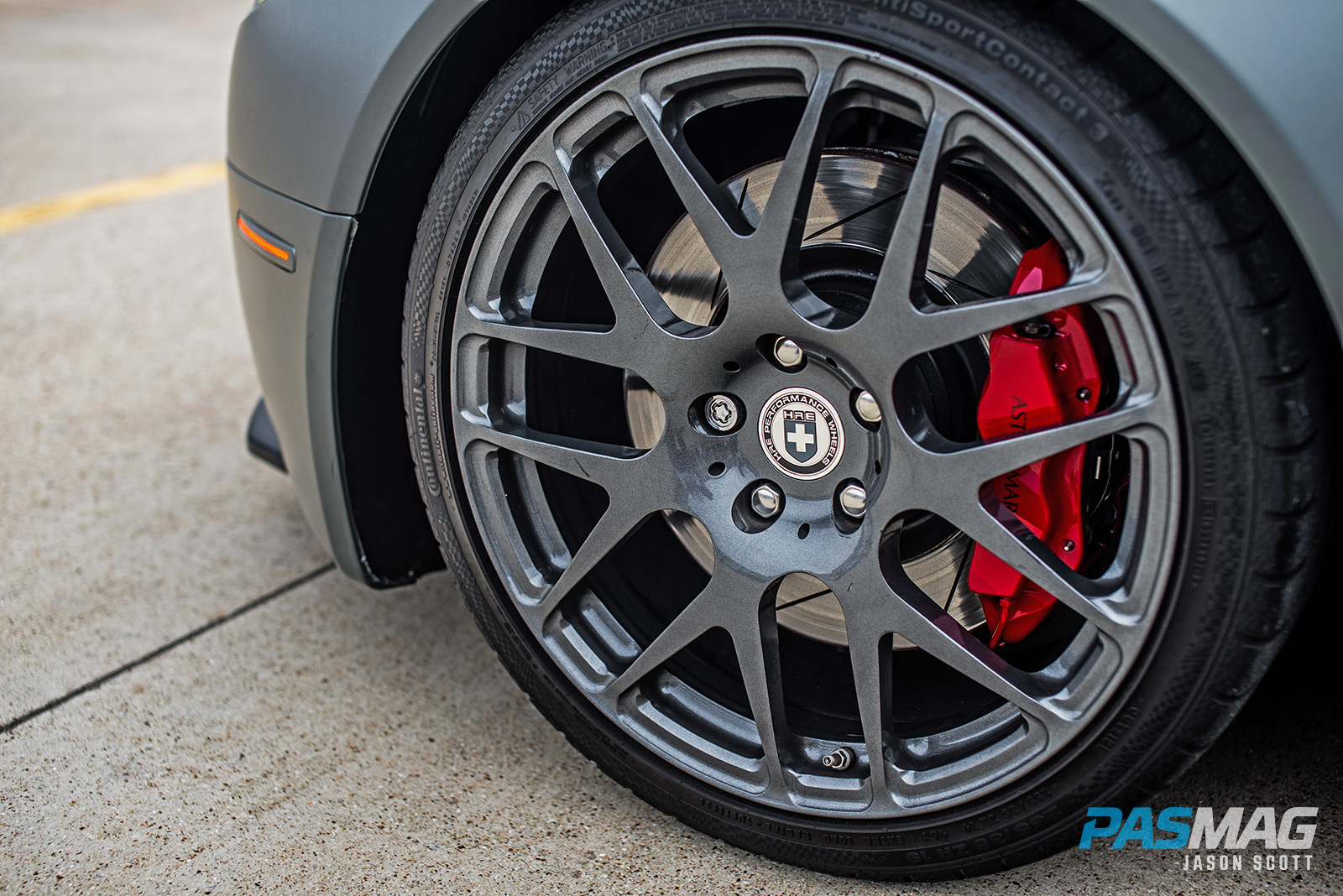 To provide a unique color that would stand out on the SEMA floor, the entire car is wrapped in Hexis “Frozen Grey” material by Kevin Kempf at PG NOLA. Hartenstein was looking for a dark silver or gunmetal that would stand out, but was afraid of the car looking like it was primered. Kempf selected the Frozen Grey and the final product is getting rave reviews. Kempf also added some leather-look textured black vinyl material to the roof and rear tailgate to provide a bit of classy contrast.

Since the car was showcasing ORACLE Lighting at SEMA, special attention was given to the entire lighting setup. After ORACLE’s Kirk Jenevein pulled the headlights apart, the projector lenses were laser-engraved in-house with the ORACLE logo. Highlighting these details, the projector was backlit with blue LEDs and red halos were added around the projector. The factory daytime running lights are swapped for red LEDs to provide a matching theme. Red LEDs are also used behind the hood and fender vents, as well as inside the rear diffuser to keep the devilish appearance, regardless of what angle you look at the car. 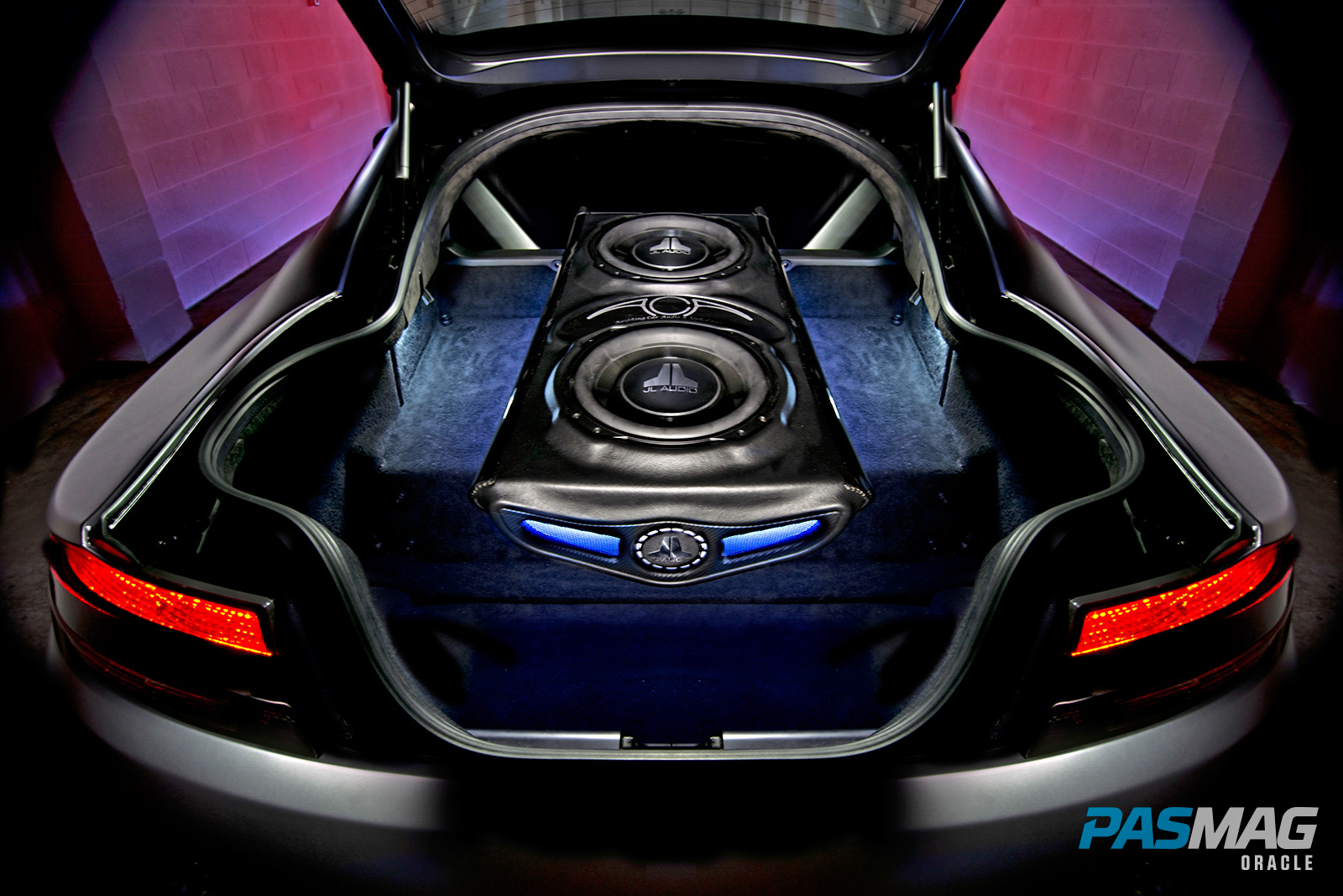 The final piece of the puzzle was the audio system, which was designed, fabricated and installed by Wesley Cato at Anything Car Audio. Cato started with a full catalog of JL Audio equipment and designed the system to showcase the capabilities of the components.

Starting in the trunk, the floating speakerbox is built with just enough depth to provide the pair of 10-inch 10TW3 “thin-line” subwoofers enough airspace for standout sound without taking up too much trunk space. Each corner of the interior is filled with four-inch C5400CM components paired with a C5-075CT tweeter to round it out. Two XD700/5 amplifiers with built-in crossovers mounted in a waterfall-style amp rack support whatever the soundtrack.

All of the audio is run through the OEM Aston Martin head unit thanks to the JL CL441dsp OEM integration interface, while the signals are swept clean via the CL-SSi summing interface. Cato took the time to hide all the wiring and even soldered every amp and speaker connection to ensure the install looks and sounds as clean as possible.

Since building the car for the 2013 SEMA show, Oracle has brought it to several events as a showcase of what can be built using their full line of products. After having the car in his possession for nearly 18 months, the Aston Martin still puts a smile on Hartenstein's face and turns heads at every stoplight every time he drives it. There are no more questions of “Why didn’t you build this one?” Now there are only whistles and nods of approval. 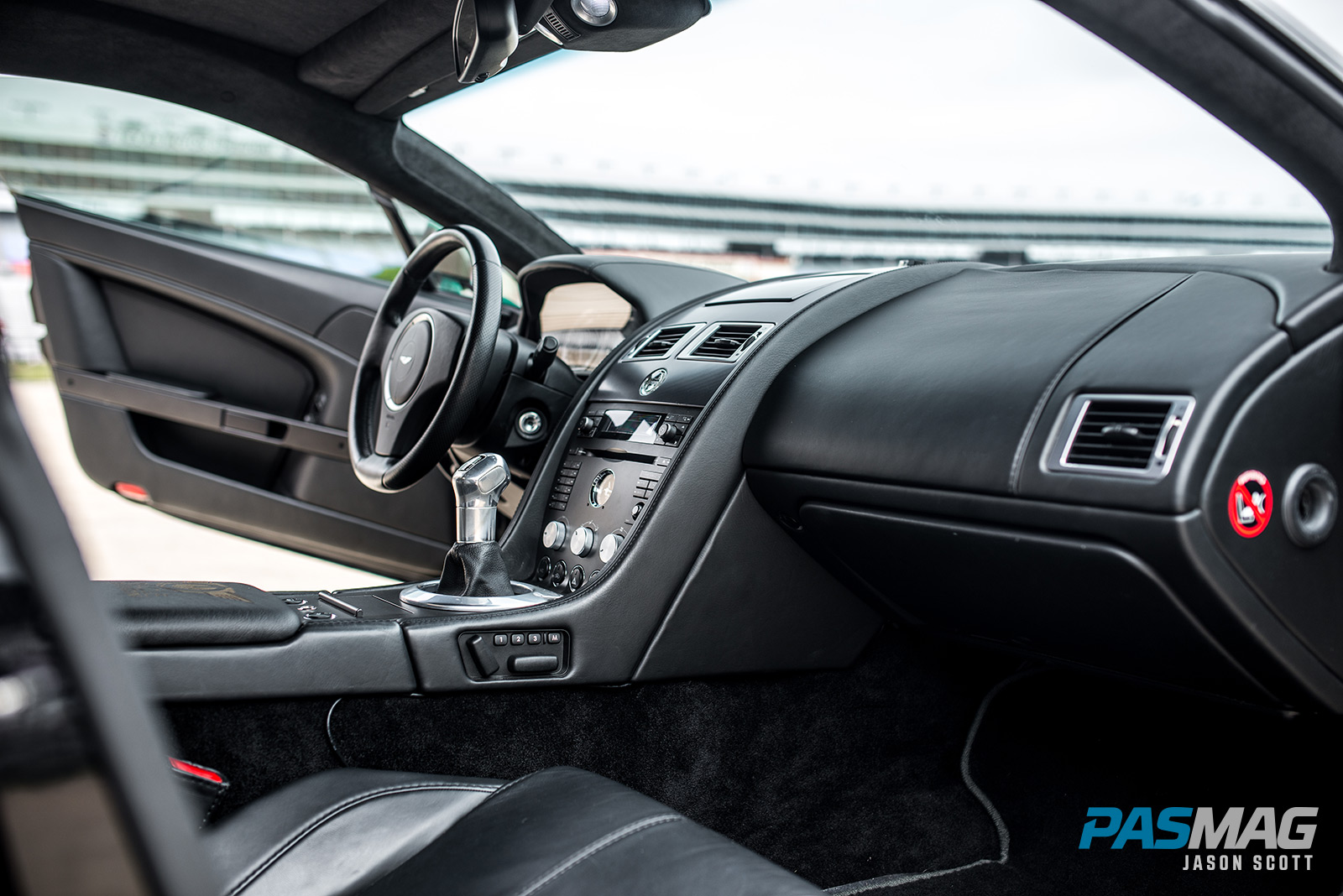 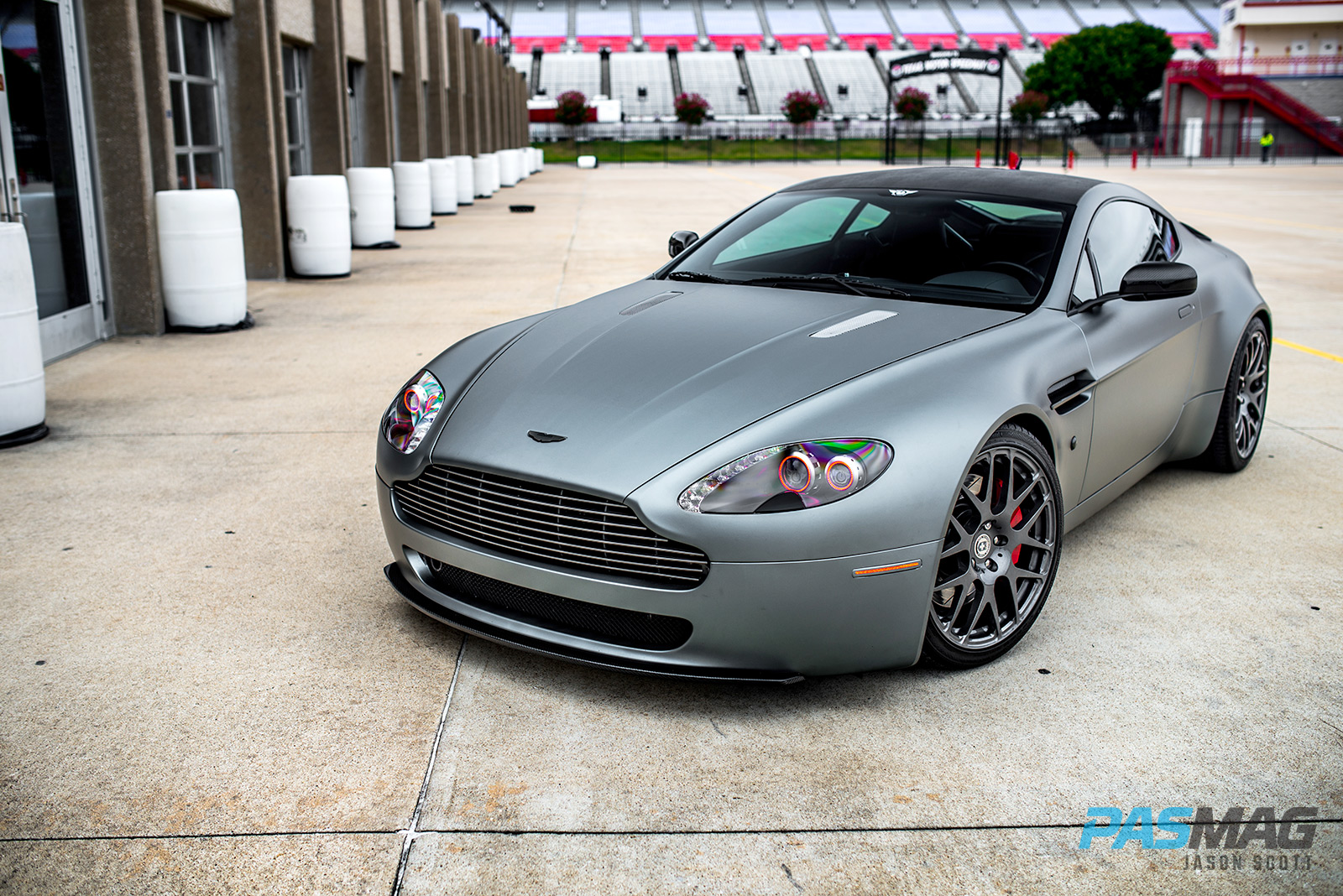 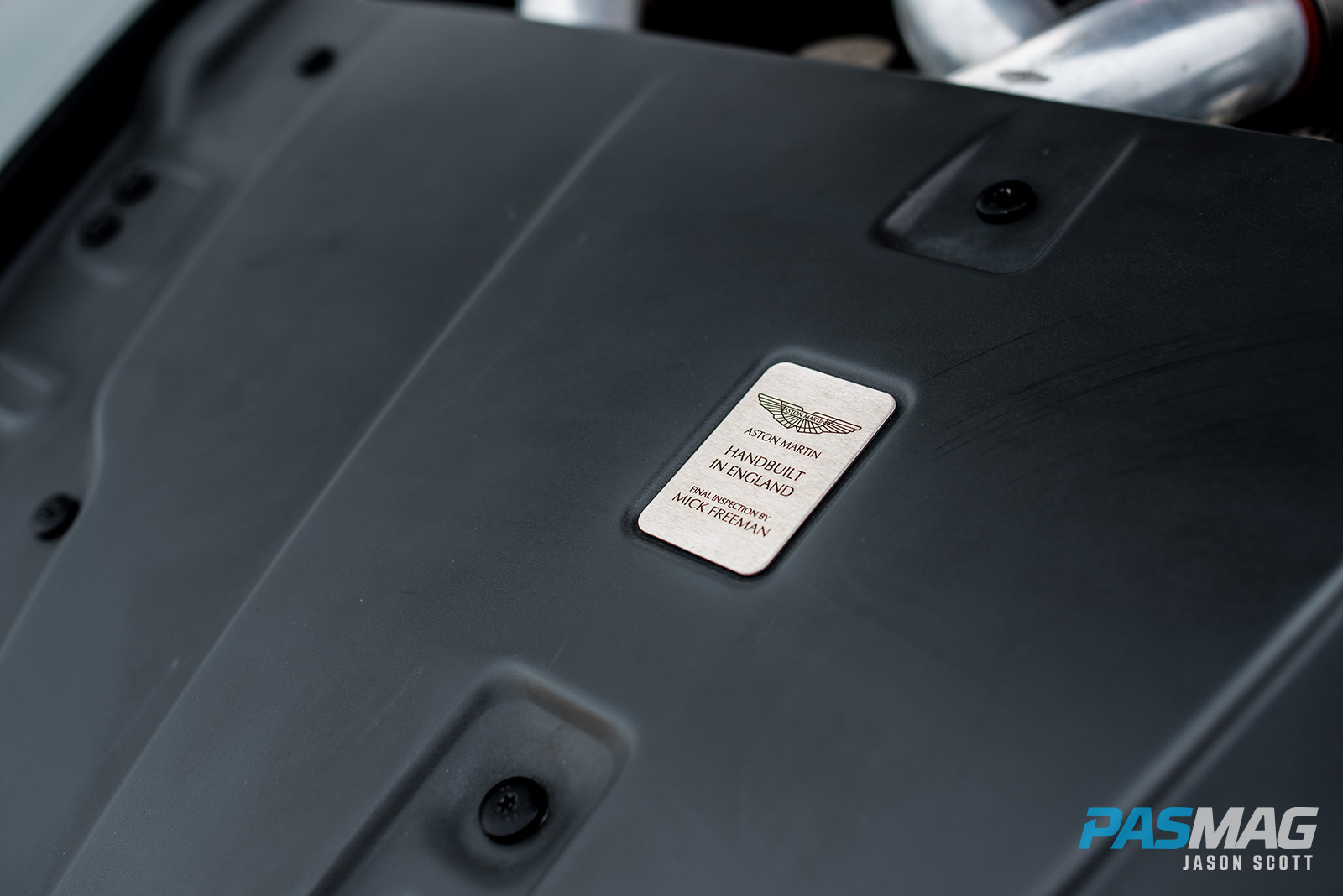 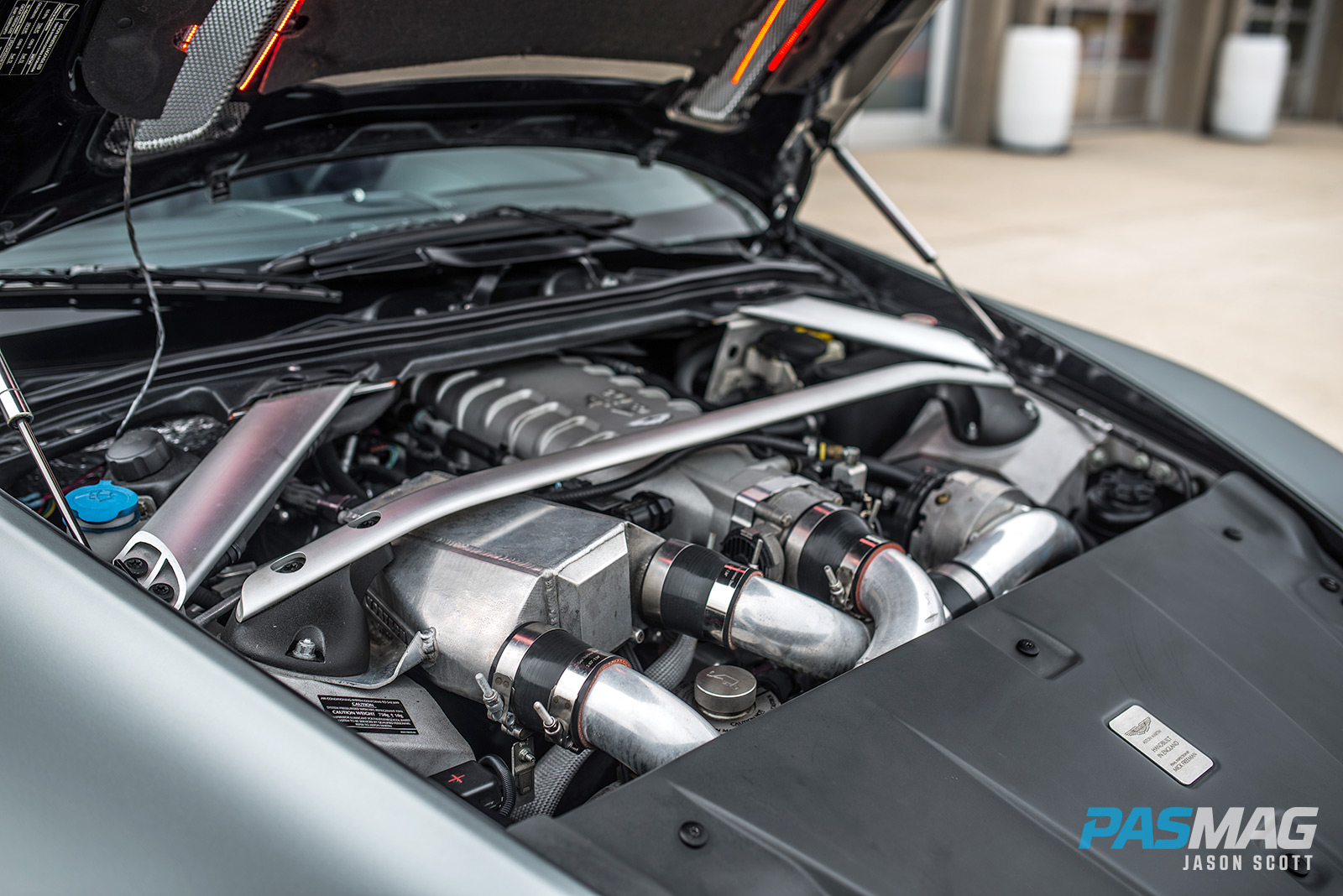 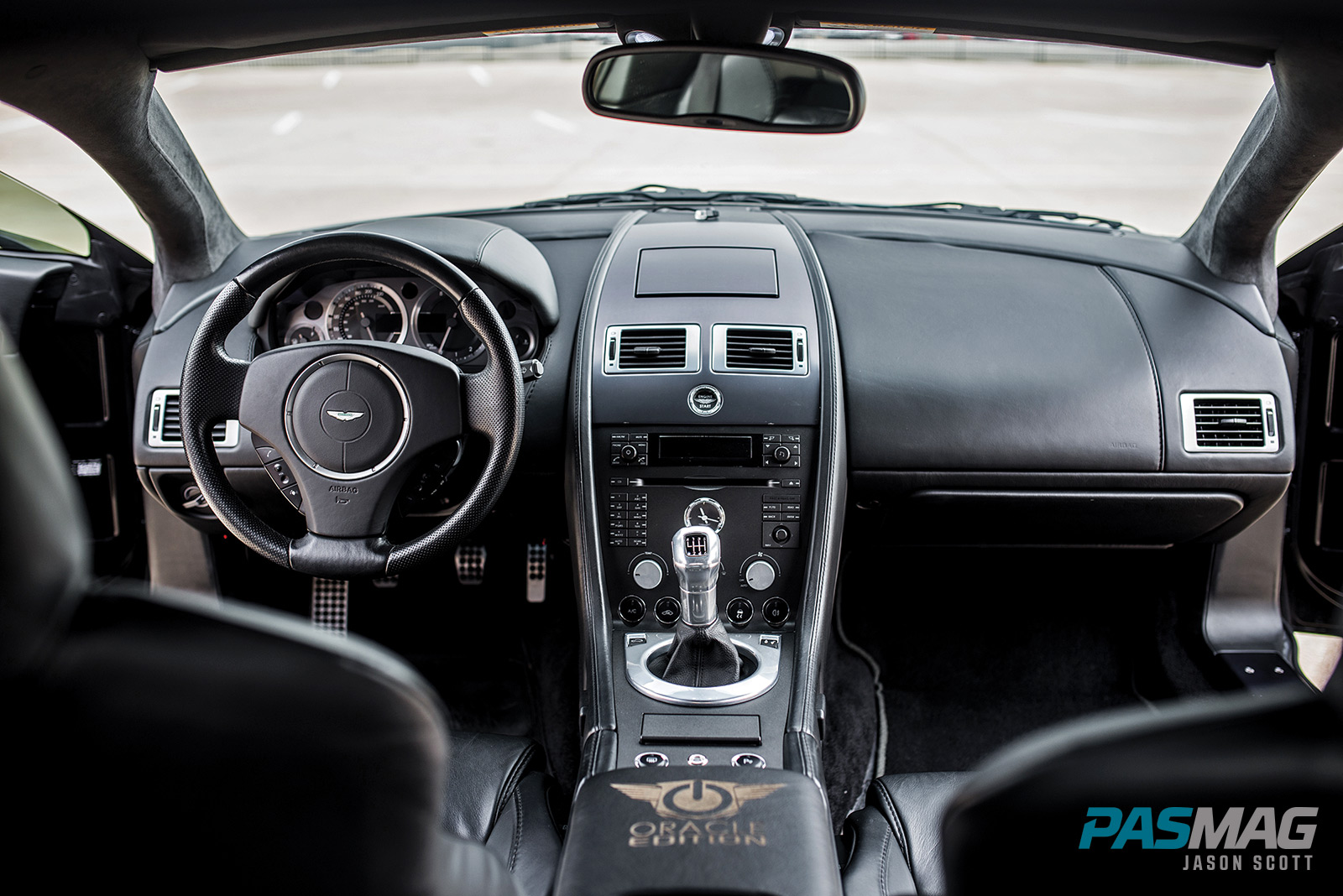 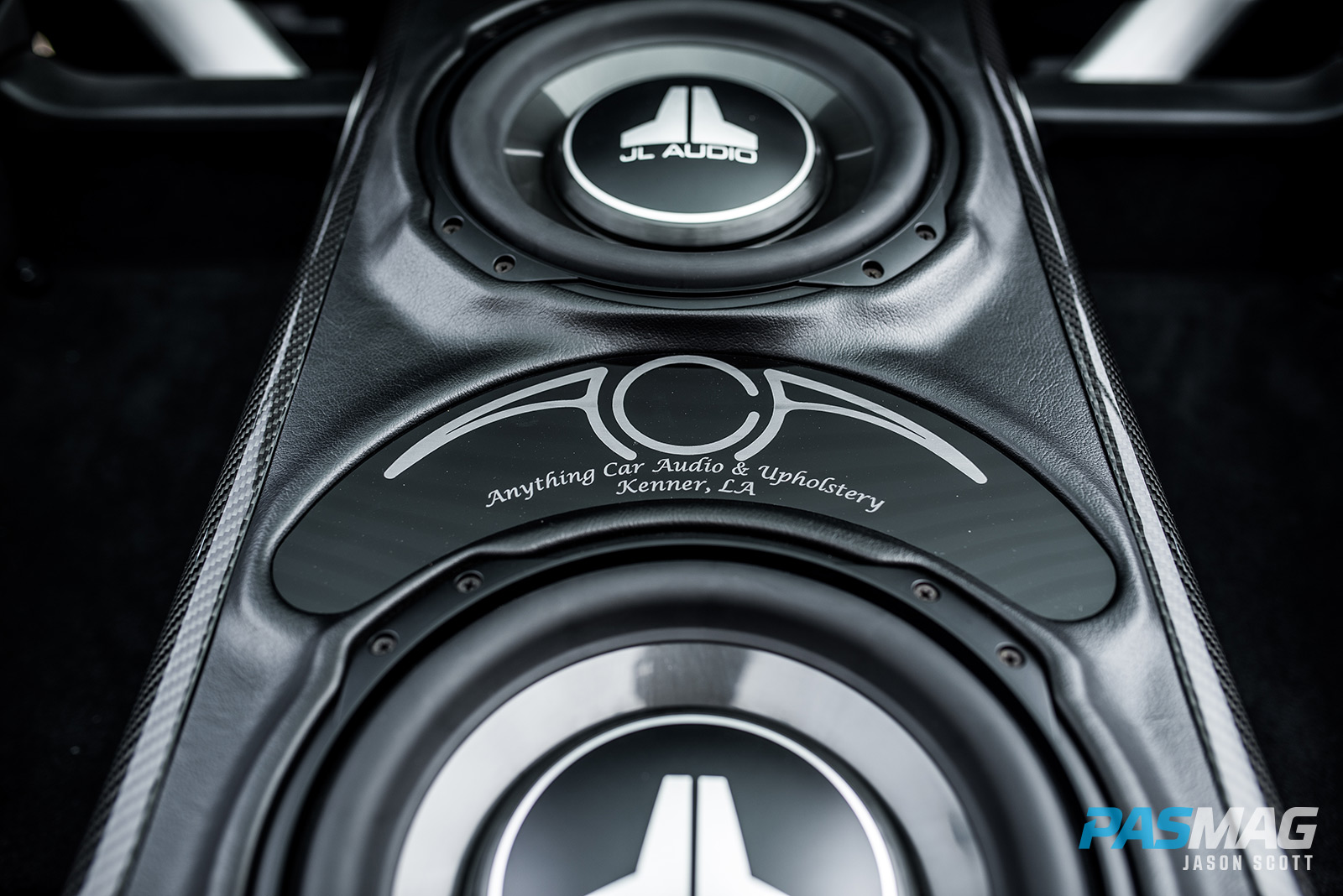 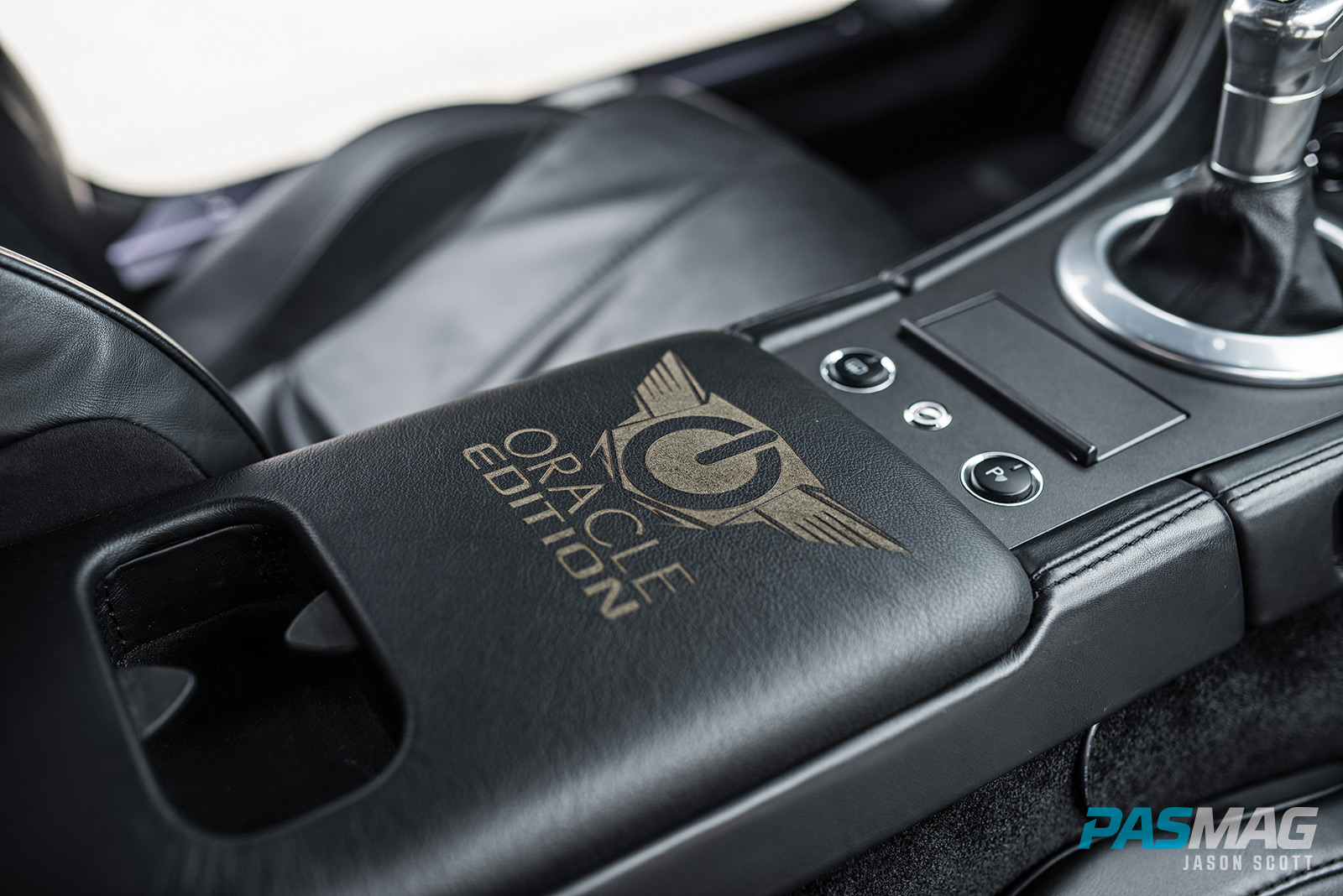 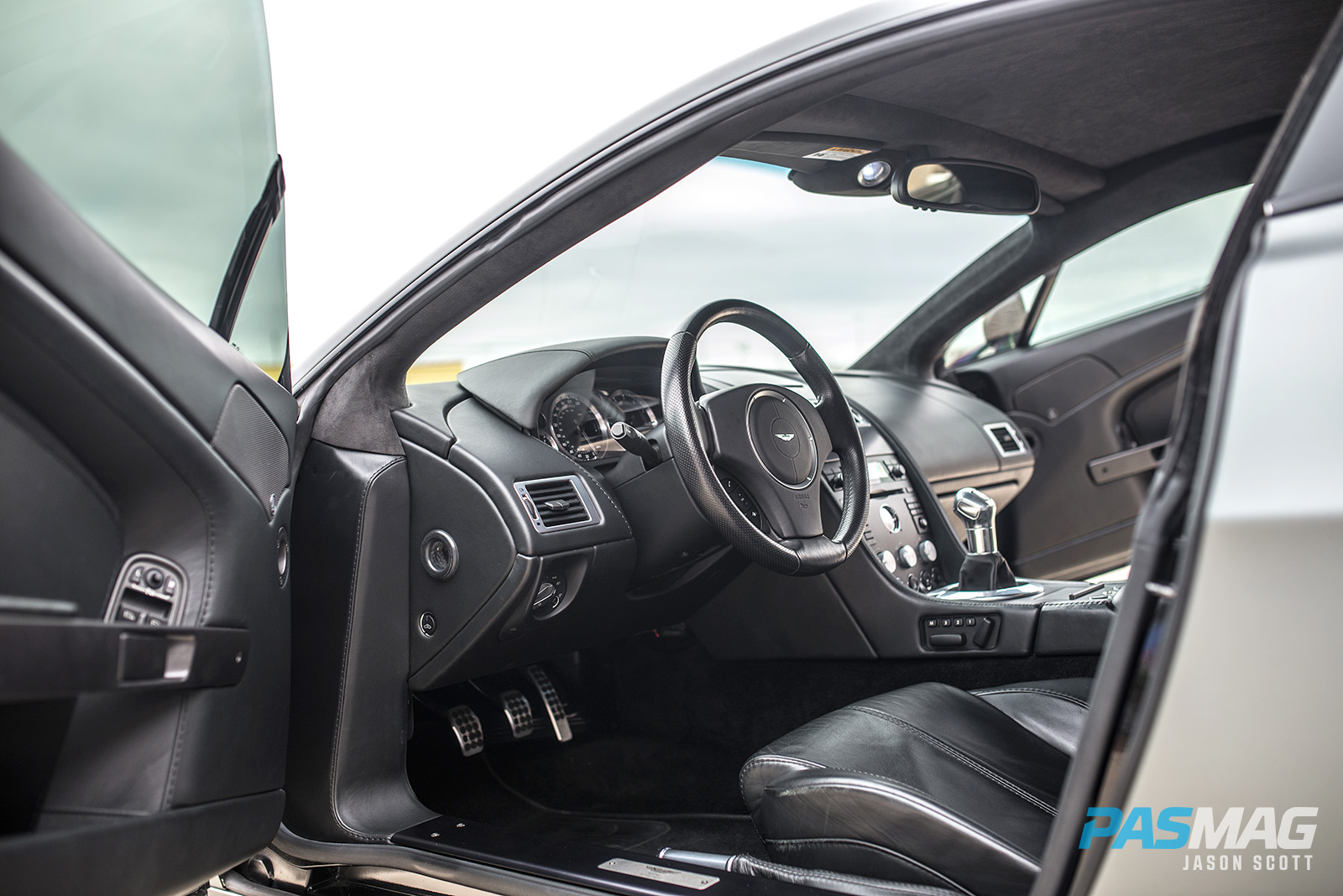 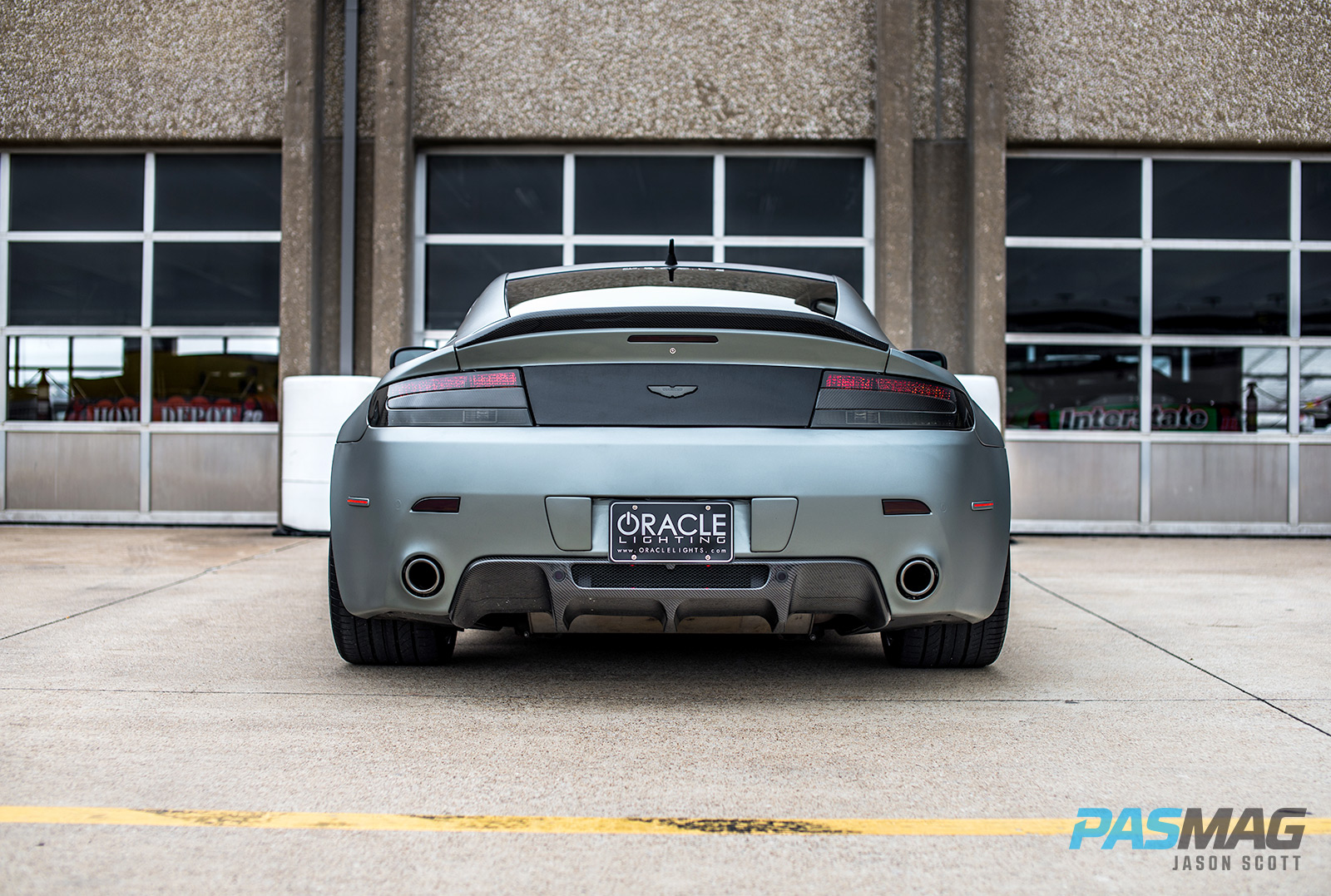 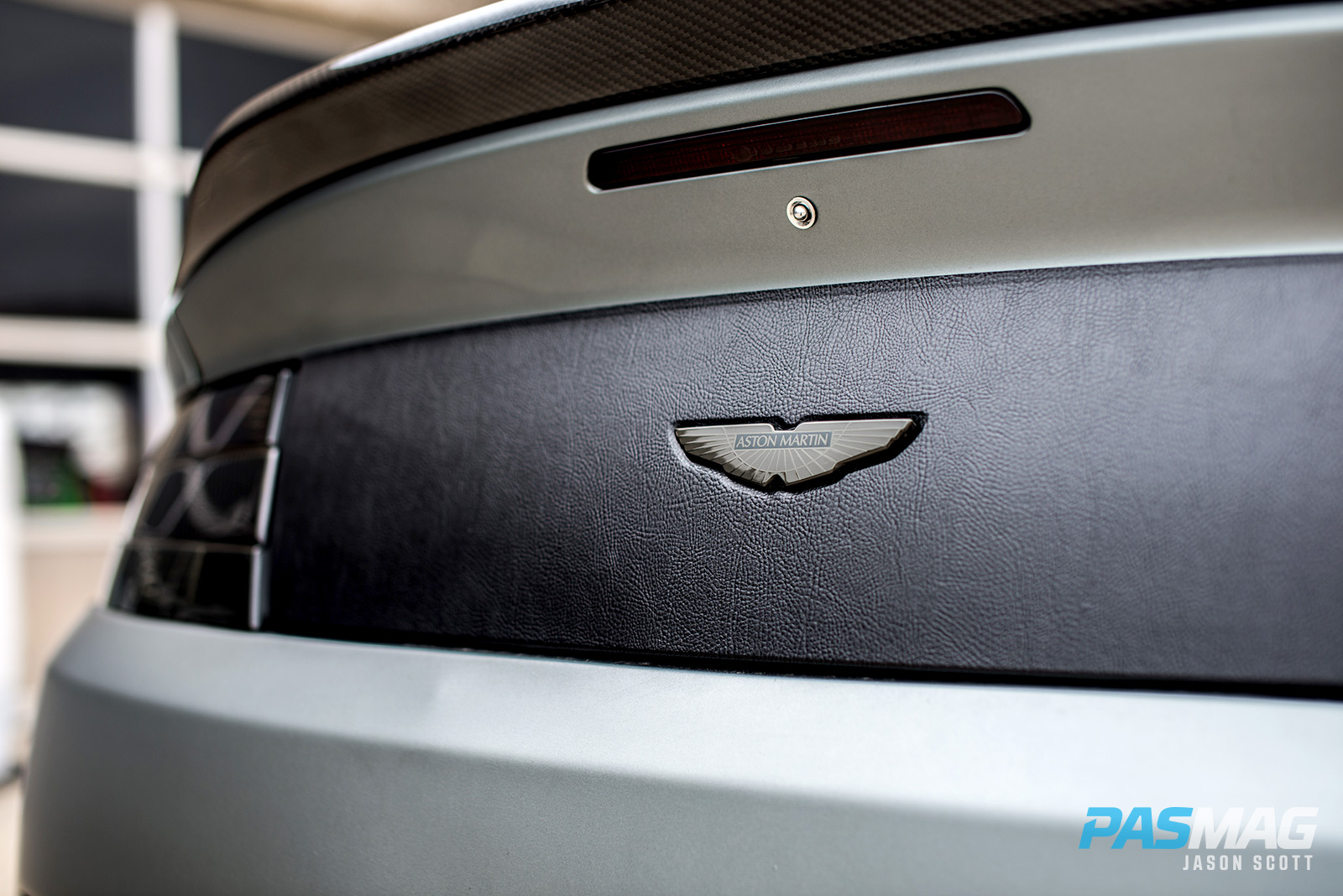 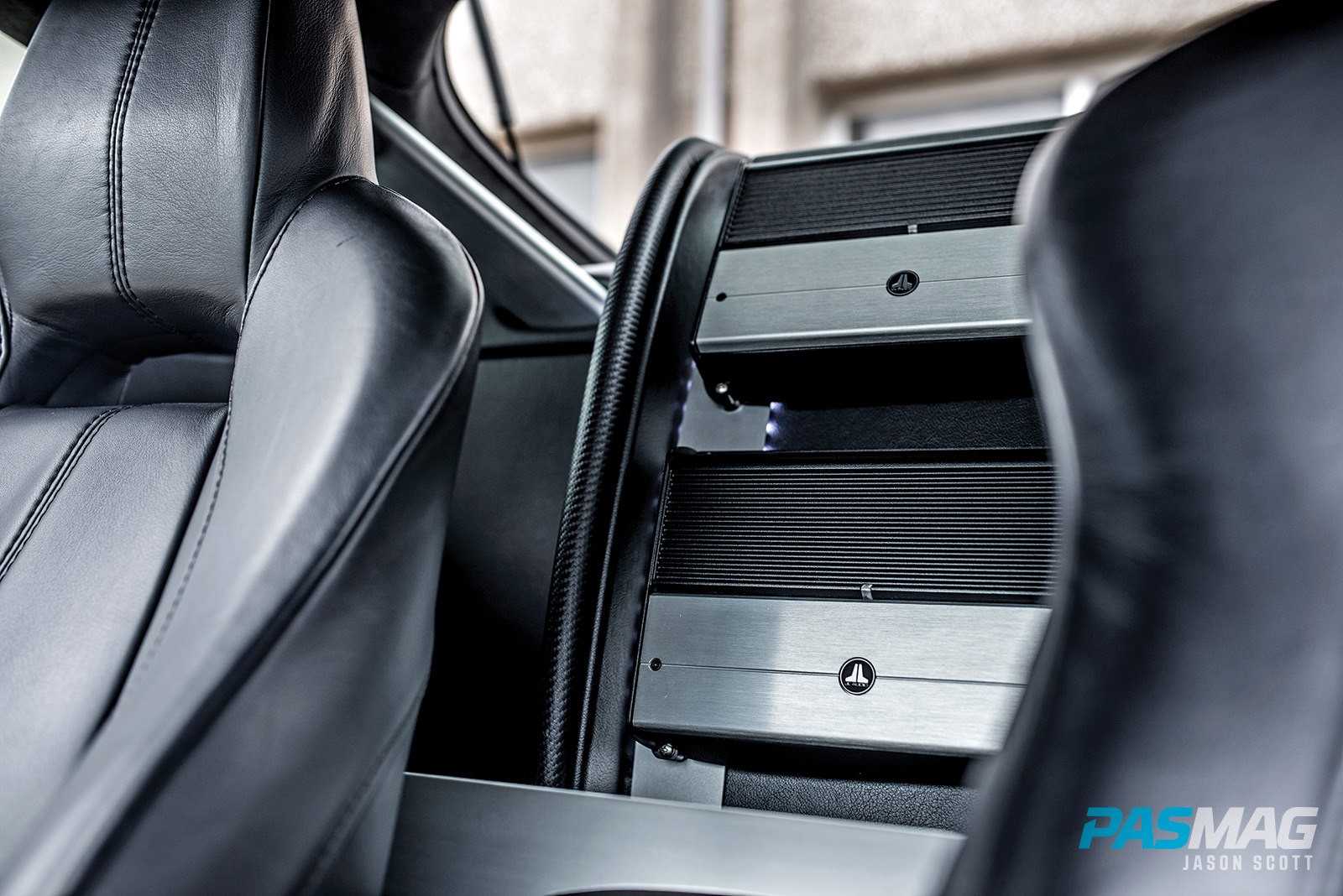 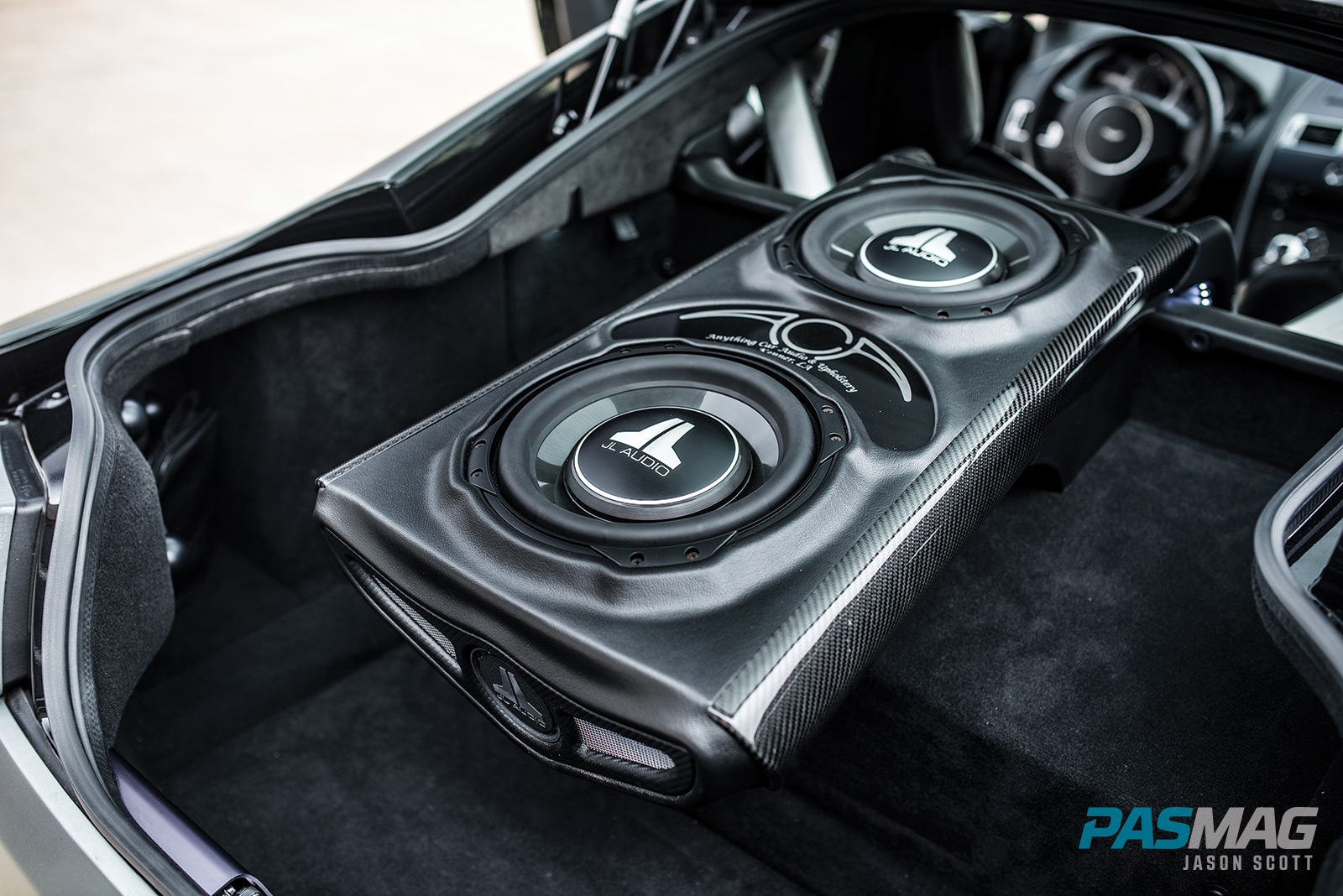 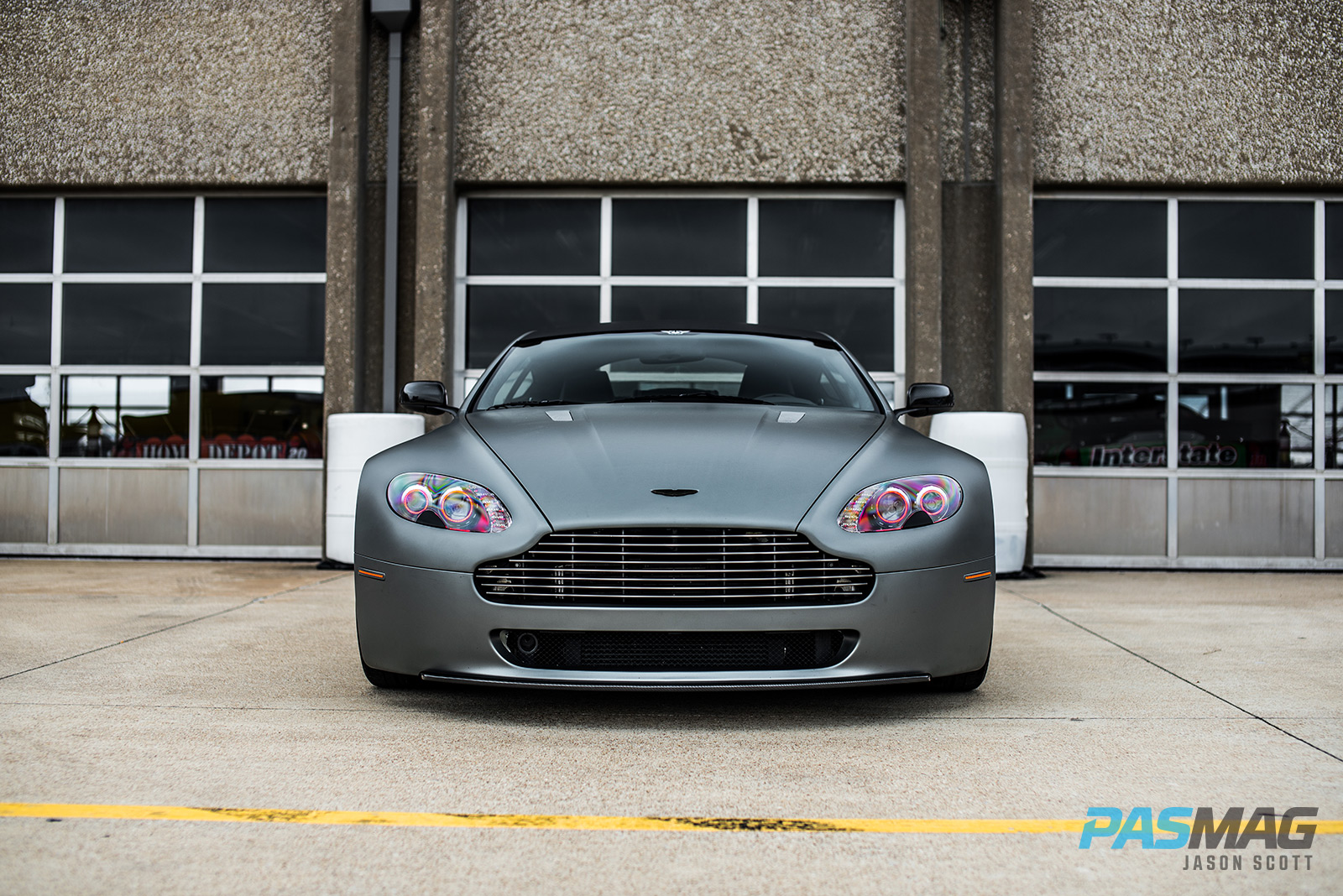 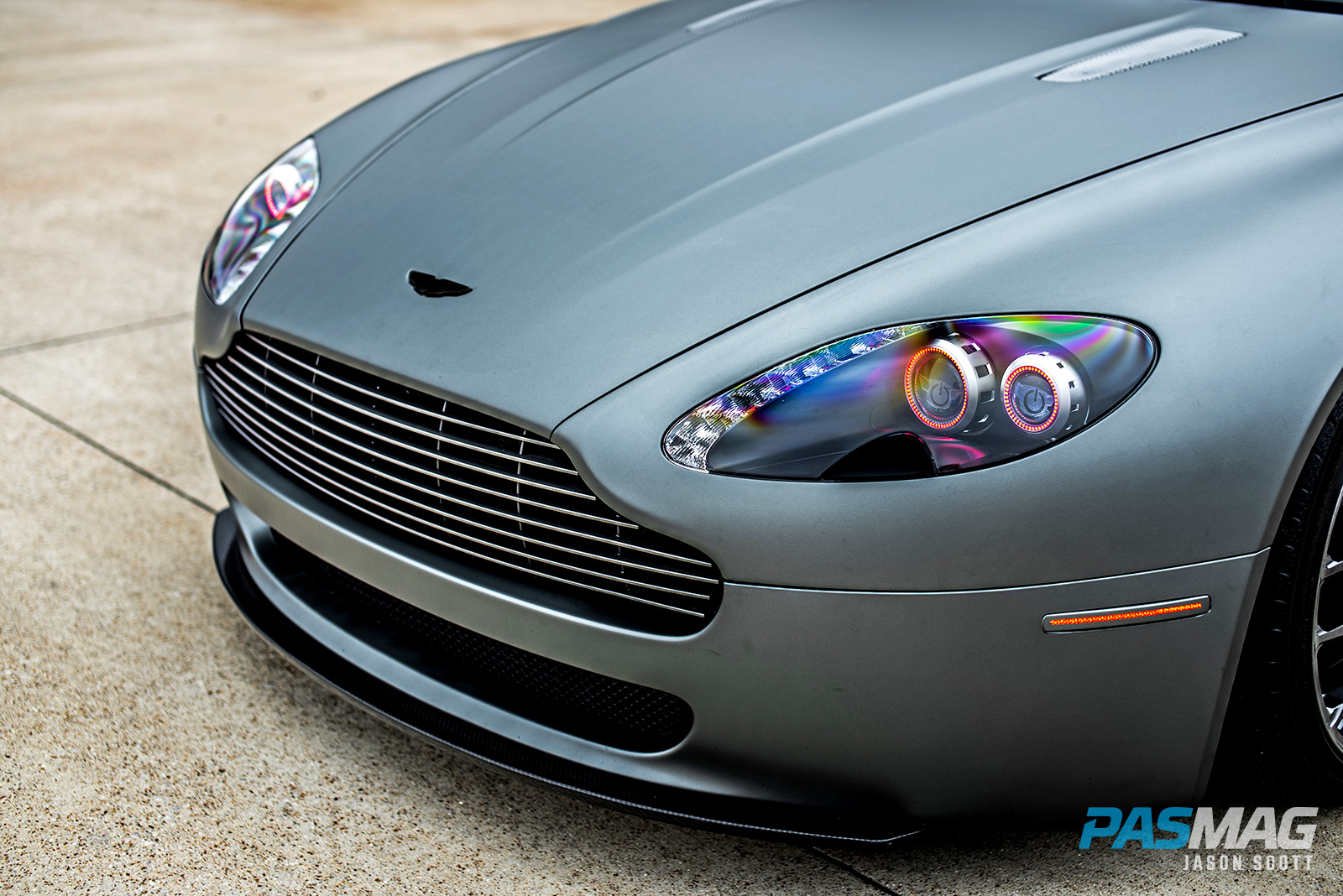 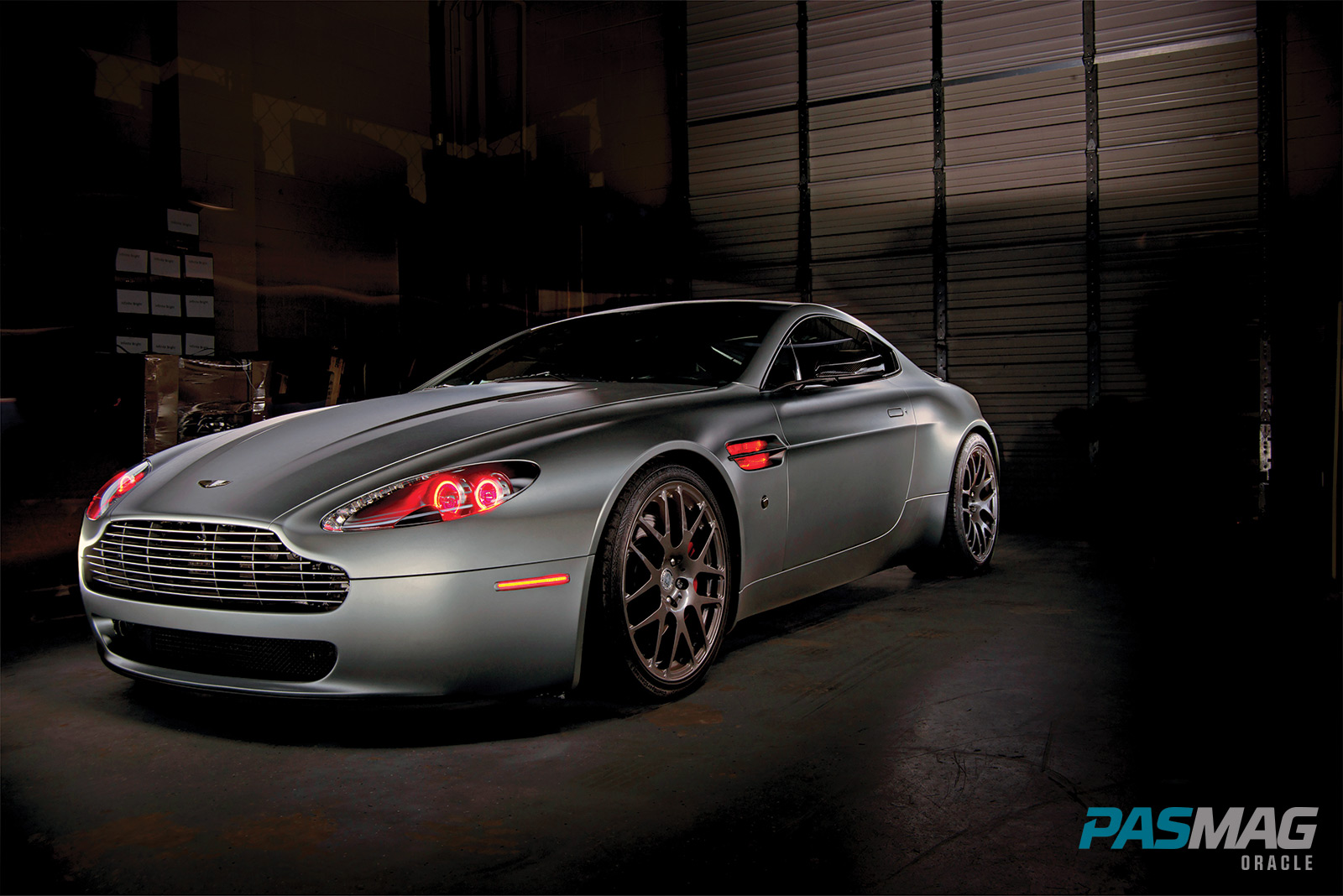 Nissan Odyvia Audio Build + Best In Show at Driven Show 2022
This is a Best In Show in my mind because I absolutely love this (dream) build. This Nissan Odyvia rolled into SoundsGood Auto in Burnaby, British...

MTI Signature Audio Build: Ford F250
Mobile Toys Inc. (MTI) is back on our feeds, and it’s probably because of their craziest Ford Build to date. The project lead on this build was Justin...