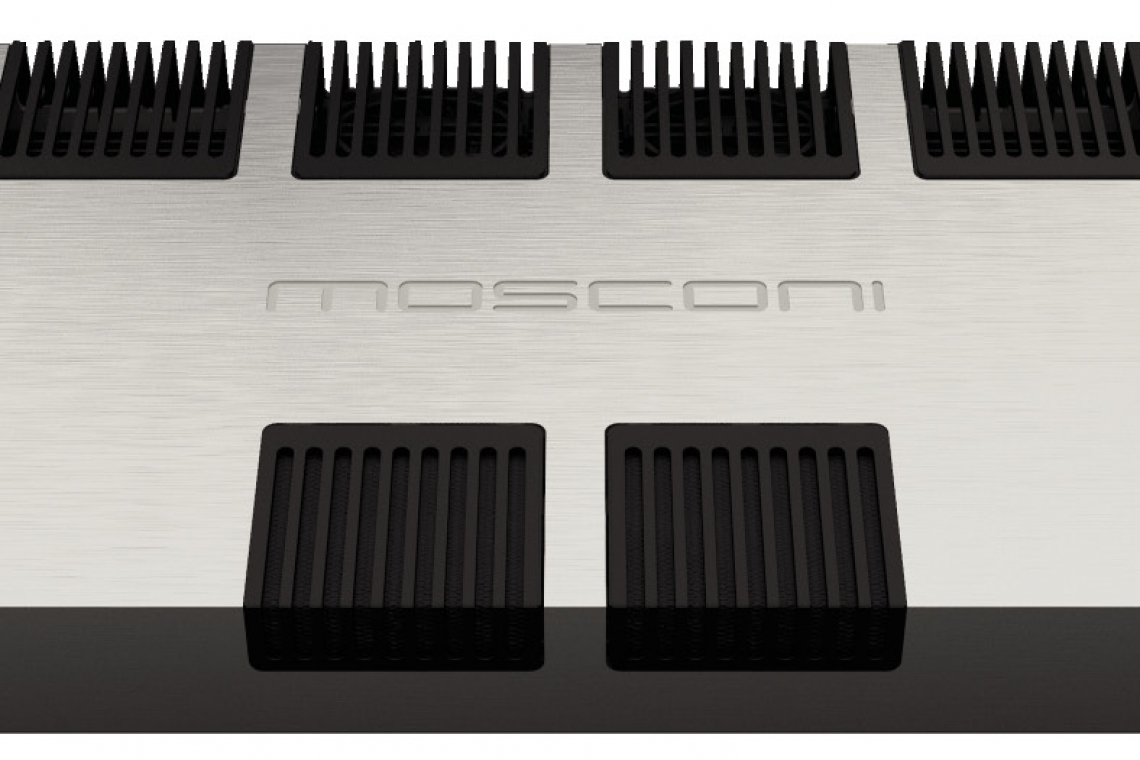 In almost every product category, there are those upper echelon products that are generally regarded as the best-of-the-best.

For example, in the automotive world we have brands like Rolls Royce, Ferrari, Bugatti and Aston Martin. If we're talking about wrist watches, we might think of Tag-Heuer, Breitling, Omega and Rolex. The point is, regardless of the product, there are always a handful of brands that represent the very finest.

In the world of car audio, Mosconi is a brand that is quickly positioning itself as a coveted product. Having launched its first line of amplifiers in its home market (Italy) in 2009, Mosconi is a relative newcomer to the car audio market. Even still, the brand has already started to branch out far and wide and is now sold all over the world, including here in the United States.

Driven by a shared passion for electronics and sound, Mosconi's team of designers and engineers have decades of audio experience and are constantly looking for ways to improve its products in the interest of quality sound.

Mosconi recently forwarded me an amplifier for evaluation and the following report ought to provide some insight into what sets this outfit apart from the rest of the crowd (and, maybe why a lot of us consider the Italians just a little bit nuts).

The amp I receive is the Mosconi Zero 1, which is a fairly unusual model designation for what is actually a two-channel amplifier. But, there's a lot more about this amplifier that makes it unusual. Take, for example, its 450 watts per channel of rated power into four ohms, its ability to drive two- or even one-ohm loads all day long and/or the fact it measures almost two-feet long long, is nearly 10 inches wide, weighs about 14 pounds and has four cooling fans! It's a big amp and it's not going to fit under your seat. Oh, and if that doesn't make the Zero 1 really stand out to you, there's always the $2,999.95 retail price. Indeed there is a lot that's different and unusual about this amp!

FEATURES
The Mosconi Zero 1 is a class AB two-channel amplifier designed to produce gobs of power at virtually any impedance you want to drive it with. And, while the amplifier will drive one-ohm loads without complaint, it's not all about brute power. In fact, the Zero 1 is also designed to be a great-sounding amplifier. But, if you really want to get it loud, rest assured this is one of the most powerful two-channel amplifiers I have tested in a very long time!

The amplifier's external housing is interesting in its own right – it's basically a hollow one-piece aluminum rectangular extrusion the actual amplifier and heatsink slide into. When the amplifier turns on, the end panels are backlit by a soft red glow and a red LED on the top of the amp provides operating condition feedback. The end result is a cosmetic look that manages to be look both high-tech and elegant.

Designed with all of the connections along the long front edge of the amp and the controls on top, the Zero 1 is simple to run wires to as well as to adjust after it's installed. The connections themselves are heavy-duty high-current capable set-screw type with full coverage from an electrical insulation standpoint. Power will accept a 1/0 cable (though it's a tight fit) and the dual sets of speaker terminals can handle up to eight gauge wire to make wiring 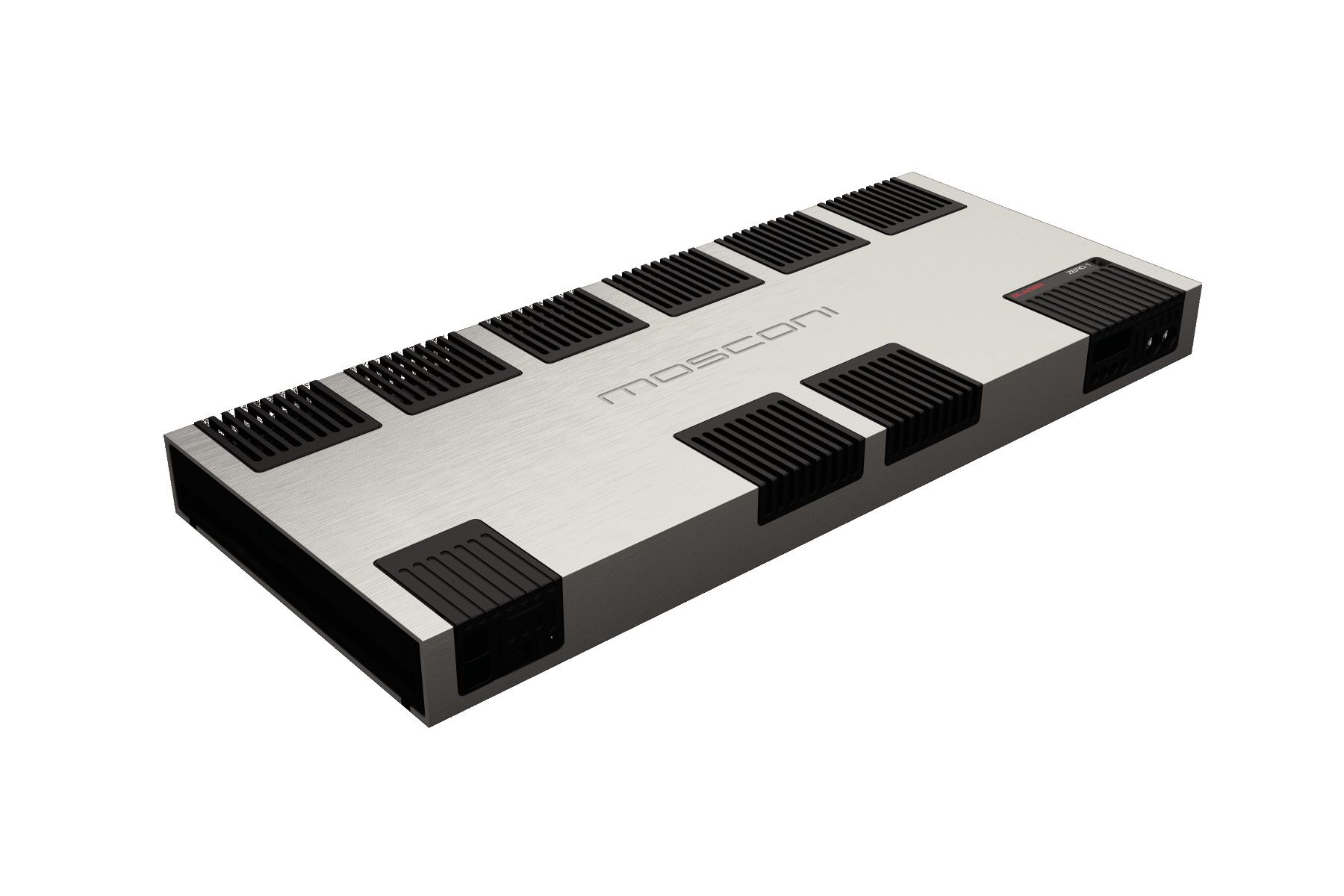 Getting back to its adjustments, the Zero 1 includes separate high and low pass filters, both of which can be engaged simultaneously should you want to create a bandpass.

Another different feature I find to be really interesting and cool is what Mosconi calls “HyperDrive.” This feature is engaged by pressing a button recessed into one of the end panels. When in use, a tiny red LED lights up and engages an alternative turns ratio on the power supply transformer, which in turn increases the actual rail voltage in the amplifier and provides roughly a 30% increase in output power. HyperDrive is very useful for extending dynamic range and definitely adds musical realism. Of course, with so much power already on tap, the HyperDrive feature is designed to be used intelligently and not as an 11- or 12-position on your volume knob. The effects are absolutely noticeable, though seem to make the most difference when driving four-ohm loads. So, for most of my listening session, I keep it turned on.

Right beside the HyperDrive button is another one labeled “OverCold.” This button tells the four on-board cooling fans to start up at full speed instead of their speeds being controlled by temperature (the default setting). The idea is if you're pushing the amp hard and you want to manage the heat, the OverCold feature provides maximum cooling on demand. The fans are actually fairly quiet, which means that even with OverCold engaged, the fan noise unobtrusive.

Inside, the Zero 1 has a very serious-looking PCB with top-quality components and a layout designed for high current and low noise. I count 16 power supply switchers, which are ultra heavy duty Fairchild parts rated at 60 V and 60 A apiece. The design uses a tightly regulated power supply that automatically monitors rail voltages and modulates the pulse width of the switching devices to maintain a constant power output as battery voltage drops.

Once the DC supply voltage has been converted to high voltage AC power, no fewer than 20 TO-3 case Mosfet outputs (each capable of handling 36 amperes) drive the speakers. No wonder this amp is rated to one ohm! With parts like this it'll drive damn near anything you connect to it.

LISTENING
Whatever the Zero 1 may lack in mounting location flexibility, it more than makes up for in simply astonishing power. Keep in mind, I'm a guy who's pretty comfortable around large professional sound re-enforcement systems and I have several personal systems that are in the kilowatt range; but, this thing is mind-bending when it comes to delivering power and it sounds so good that you just want to keep turning it up. And, as you do, it simply keeps getting louder and louder. I'm unable to find any volume point where the amplifier is even close to reaching its limits. I only wish I could say the same for my speakers. Suffice to say it'll take some serious speakers to handle this baby even if you stick to just four ohms!

Okay, let's pretend for a minute you have more self control than I and you can leave the volume at a normal level and just listen to your music. In this regard, you will not be disappointed. From a sonic perspective, the Mosconi amp is quite good. With an average output power of maybe only 10% of what's on tap, the Zero 1 provides excellent sound. The amplifier's timbre is very neutral and it produces a spectacular stereo image. I spend about three hours listening to some of my most revealing music and walk away most pleased and impressed. The power on tap is so addictive that I find myself listening at much higher than normal levels just because it's so much fun! Oh, and did I mention the power?

PERFORMANCE / BENCH MEASUREMENTS
On the test bench, the Zero 1 confirms that it is indeed a powerhouse to be reckoned with. I run power tests from four ohms all the way down to one ohm and it never skips a beat. It does display its rather voracious appetite for current, however. If you are fortunate enough to be able to buy a Zero 1 for yourself, while your check book is out, make sure your vehicle's electrical system is up to the task. Let me give you a couple of 'for instances' to illustrate my point. At 10 watts per channel into four ohms, this puppy draws 17 amps. At full power into four ohms, it needs to be fed 94 amps of current. If you are really nuts and drive the thing in bridged mode into a two-ohm speaker load, you'll need about 428 amps of current. (I'm reminded here of the old adage, “Power costs money. How much do you want?”) Plan accordingly. But, if you have the money for the care and feeding, your power reward is over 2,800 watts!

I also run the amp into one ohm and even try listening to a one-ohm subwoofer load connected to the bridged output. Amazingly, it simply plays everything I can connect to it. (Note: One-ohm bridged loads are not recommended. I'm a professional with 30 years of experience. Don't try this at home!) While I keep ranting about its unbelievable power, I'd be remiss not to mention the Zero 1 also scores very highly in other areas like frequency response, signal-to-noise, stereo separation and output impedance. If you believe damping factor is important, this amp has a measured damping factor of better than 2,000 at 100 Hz with 10 watts into four ohms. Now stick that in your output impedance and smoke it.

CONCLUSION
When I am considering amplifiers that exist simply to be the best performing amps a company can design regardless of cost, I expect something approaching perfection. And, while the Zero 1 may not be quite perfect, as it is the Mosconi Zero 1 is an immensely powerful yet very good-sounding, very impressive amplifier. If you have deep enough pockets, are into high fidelity and high SPL, then maybe it is the perfect amp for you.