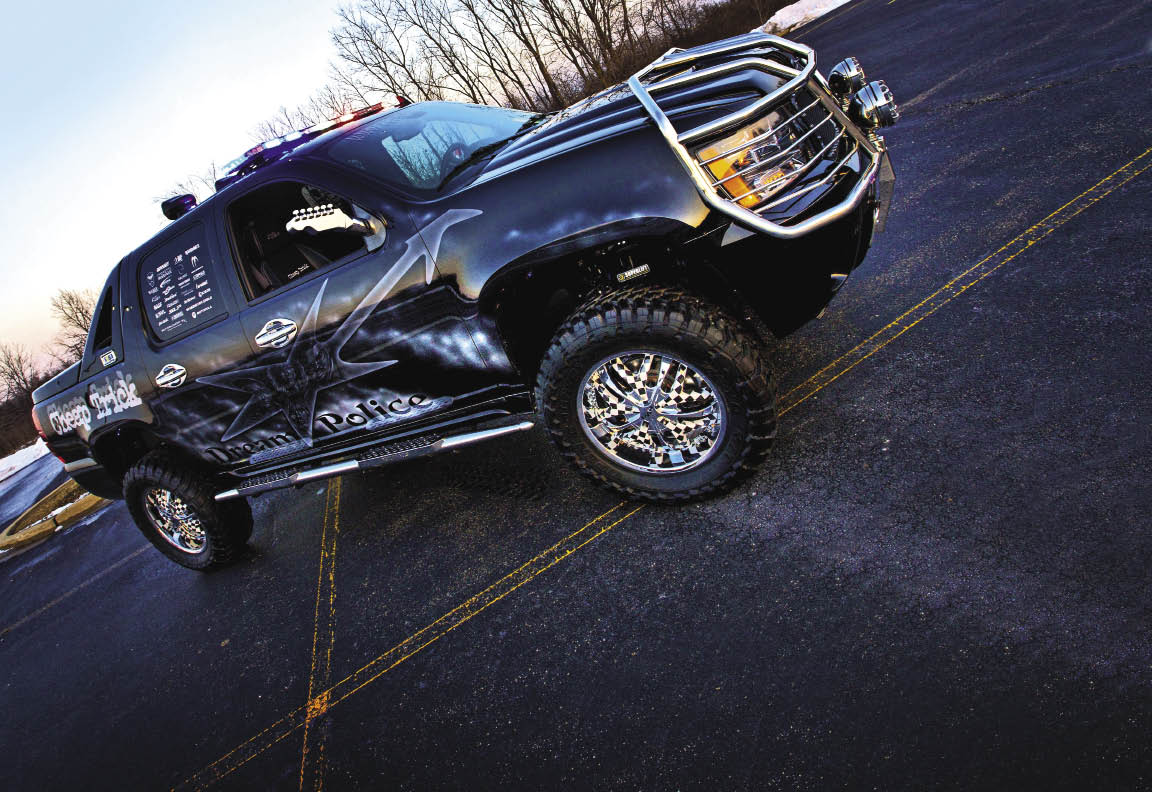 Back in the day when the USA basketball program set their sights on gold, the first “Dream Team” was formed with an all-star line-up including the NBA’s greatest icons: Michael Jordan, Magic Johnson, Larry Bird, Charles Barkley, Patrick Ewing, Clyde Drexler, David Robinson, John Stockton and Karl Malone just to name a few. The mission was simple… assemble an elite team to dominate and strike fear in the competition. Much like that gold-medal winning Dream Team in Barcelona many years ago, the crew at Maxxsonics USA and RealWheels had a similar approach and desire to dominate the car audio industry with their latest iconic SEMA / CES demo vehicle.

The Maxxsonics team turned the keys of this once modest Chevy Avalanche over to the experts at RealWheels Corporation (RWC). The project team at RealWheels Corporation has a reputation for building the wildest custom vehicles. Their award-winning designs are usually built around a particular theme, as this would be no different. Their projects range from luxury sports cars, off-road vehicles, and even big rig trucks. 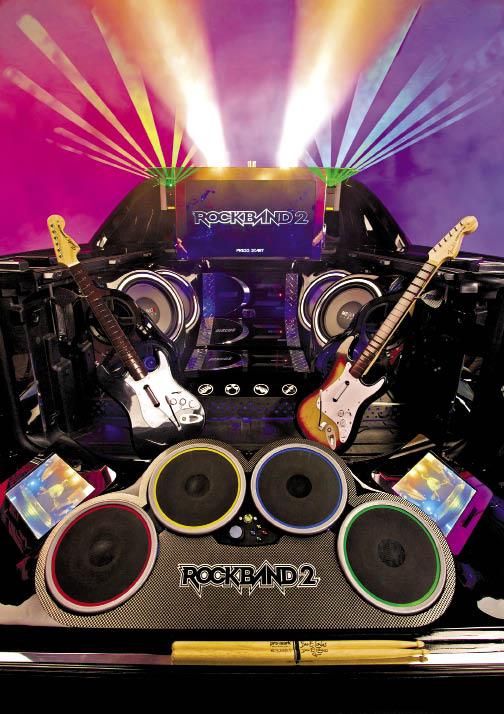 “The inspiration came from my four children,” explains RealWheels Vice President Jhan R. Dolphin “My wife and I watch them play the video game Rockband and realized most of the music they were playing was the stuff I grew up with. Our project team has always wanted to create a music-themed vehicle, and the huge popularity of these music-based video games made the timing perfect. These games have definitely helped hit music from the 70s, 80s, and 90s cross into younger generations. The fact that Cheap Trick’s music is also used for the opening promo video for the new Rockband 2 game was pure luck. I love it when a plan comes together! 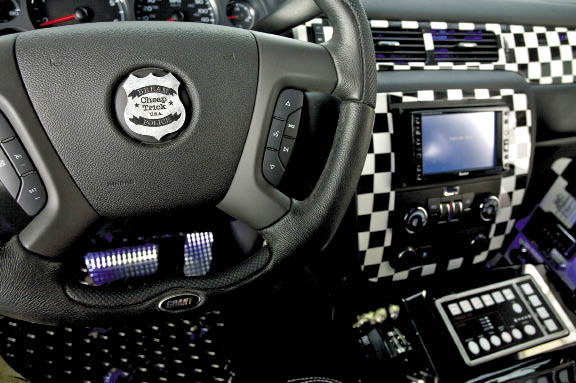 There’s no disputing that Cheap Trick is one of America’s legendary rock bands. Also hailing from Northern Illinois, Cheap Trick has been blending elements of pop, punk, and even metal music in a way that is instantly catchy and recognizable. With timeless classics like “Surrender,” “Dream Police,” and 80s hit “The Flame” Cheap Trick is an institution. 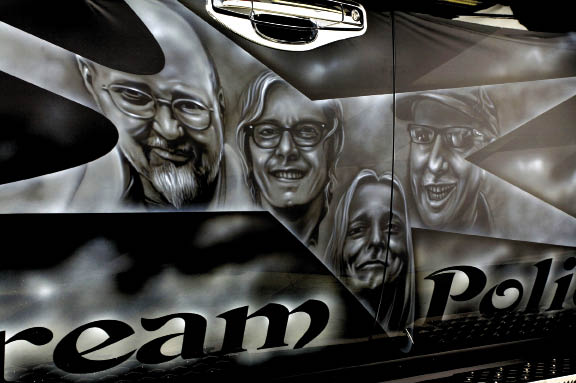 The RealWheels team seems to have their project vehicle system down to a science. They usually develop the concept and theme early in the year; begin the actual physical build in early summer, and then completing the project in time for unveiling at the automotive industry’s huge SEMA (Specialty Equipment Market Association) show in Las Vegas in late October. Not this time, according to Dolphin, “We started on the concept very early in the year, but did not have the Avalanche until the first week of September. Thankfully, most of the aftermarket parts and components had already arrived and were ready to install.” From that point on, the team needed to adhere to a strict completion timeline. “We’ve got a lot of other projects going at the same time, as well as manufacturing all of our regular vehicle enhancement products for customers all over the world. Even with a project as potentially huge as this, the customers come first.” One thing the guys have realized is that some of the coolest modifications come during the final days of the build. 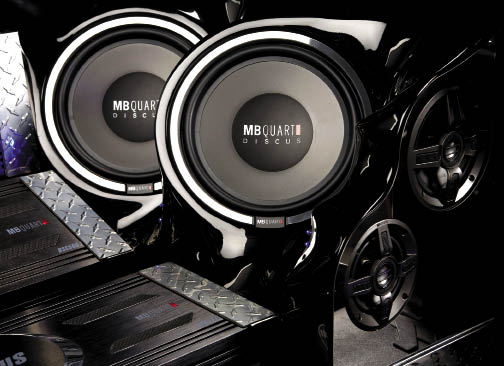 “As the project begins to take shape, and we get close to completion, we always find ways to add important details that weren’t even considered during the early stages of planning,” says Project Manager Cory Polka, “As much as we hate to veer from the original plan, we know the last minute add-ons are also the ones that crowds seem to love the most.” One such addition is the custom Hamer guitar, mounted like a shotgun in the front seat. Dolphin spoke to Jol Dantzig and the crew at Hamer about a last minute thought to have a guitar in the vehicle. Hamer is a big part of the band’s history, with many of Guitarist Rick Nielsen’s wild collection coming from them. “I could hear in Jol’s voice even though there was very little time to create a custom guitar, he was also a big fan of custom vehicles and was committed to making it happen.”

Less than a week later, an amazing one-of-a-kind Cheap Trick guitar showed up. You gotta love guys that can make things happen! In addition to the impressive list of product sponsors on the project, Maxxsonics USA and RealWheels enlisted the help from painter Jay Wright from CPV to complete the awesome paint scheme (with images of the band from the days when the Dream Police album was first released on one side of the truck, and the band as they are today on the other). Working with a legendary rock group meant there was no-skimping on the rockin’ sound system. Audio specialist Mike Benz from Maxxsonics USA joined the team to help complete the incredible sound system with custom enclosures housing the high-end MB Quart line of audio gear. The entire system consists of 6 MB Quart Subwoofers, 12 speakers and 5 mighty MB Quart amplifiers. One challenge was to provide loud crisp sound outside the rear of the vehicle for those playing the Rockband game, while making sure the sound inside the truck was equally high quality. No easy task, but successfully completed with the innovative placement of speakers, subwoofers, amps and the overall audio design of great MB Quart products. 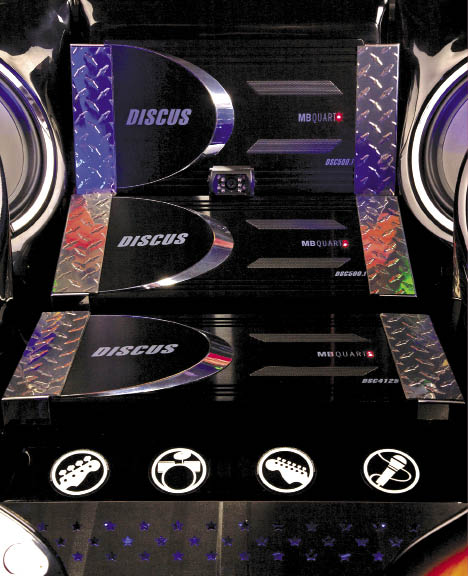 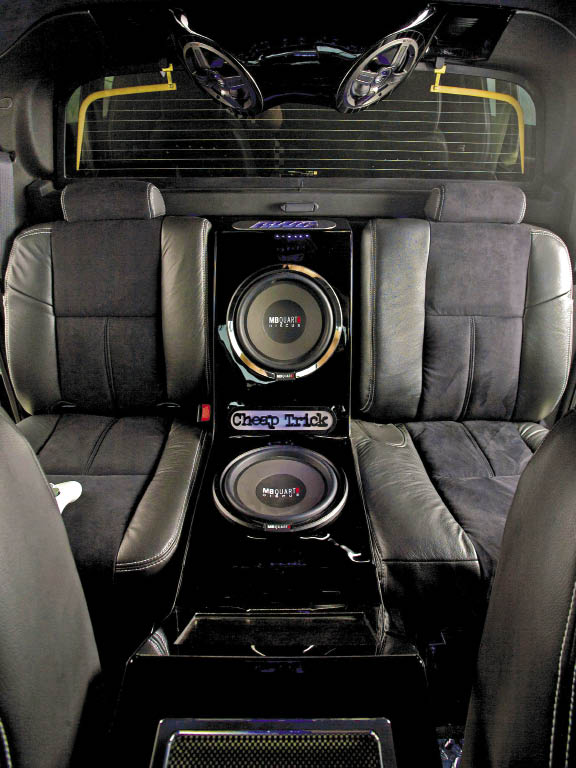 “Also based in Northern Illinois, Maxxsonics USA really stepped up with an arsenal of amps, speakers, subwoofers and custom enclosures for the build and we love their equipment. Audio Specialist Mike Benz at Maxxsonics joined our team, and provided us with one of the best sounding vehicles that we’ve ever created!” states Dolphin. Special thanks go to the dedicated project partners who made the build possible Much respect goes out to the RealWheels Dream Team including Jhan R. Dolphin, Cory Polka, Greg Polka, Ron Tushner, Mike Jucius, Roger Tushner, Roberto Carbajal and Eric Polka.

There’s no denying vehicles like this Avalanche are the ultimate attention-getters, so many more businesses are catching-on that they are fantastic marketing tools. Auto enthusiasts’ love affair with hot cars and trucks will never die, and young and old alike seem to enjoy them equally. The vehicle was officially unveiled at the SEMA show in Vegas, and was also displayed at the Consumer Electronics show. It was one of the most popular attractions at the Chicago International Auto show, and additional dates and appearances are now being scheduled for the summer months. Because of Cheap Trick’s local roots, plans to attend some of the local music festivals, car shows and concerts are also on the list. It should be a busy summer for the team at RealWheels and Maxxsonics. 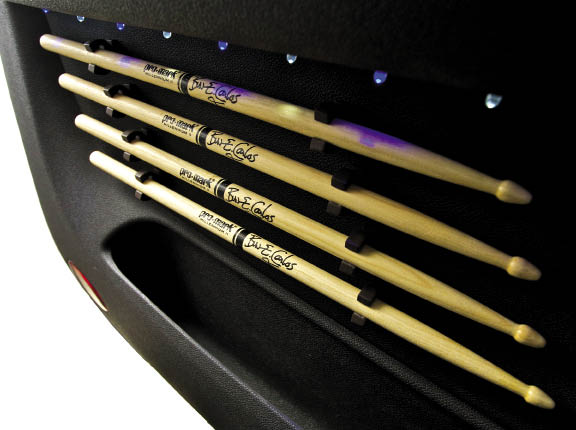 KBM Auto Art: Painted Initial D Animation Style Cars
Just when you think we may have hit the wall as far as unique paint jobs and finishes go, someone throws a curveball. Graffiti artist KBM worked his...

Brian Crower Toyota A90 Supra Stroker Kit
The BC stroker for the Toyota Supra with the B58 engine will increase displacement to 3.2L and delivers over 300 more ft lbs of torque for even faster...