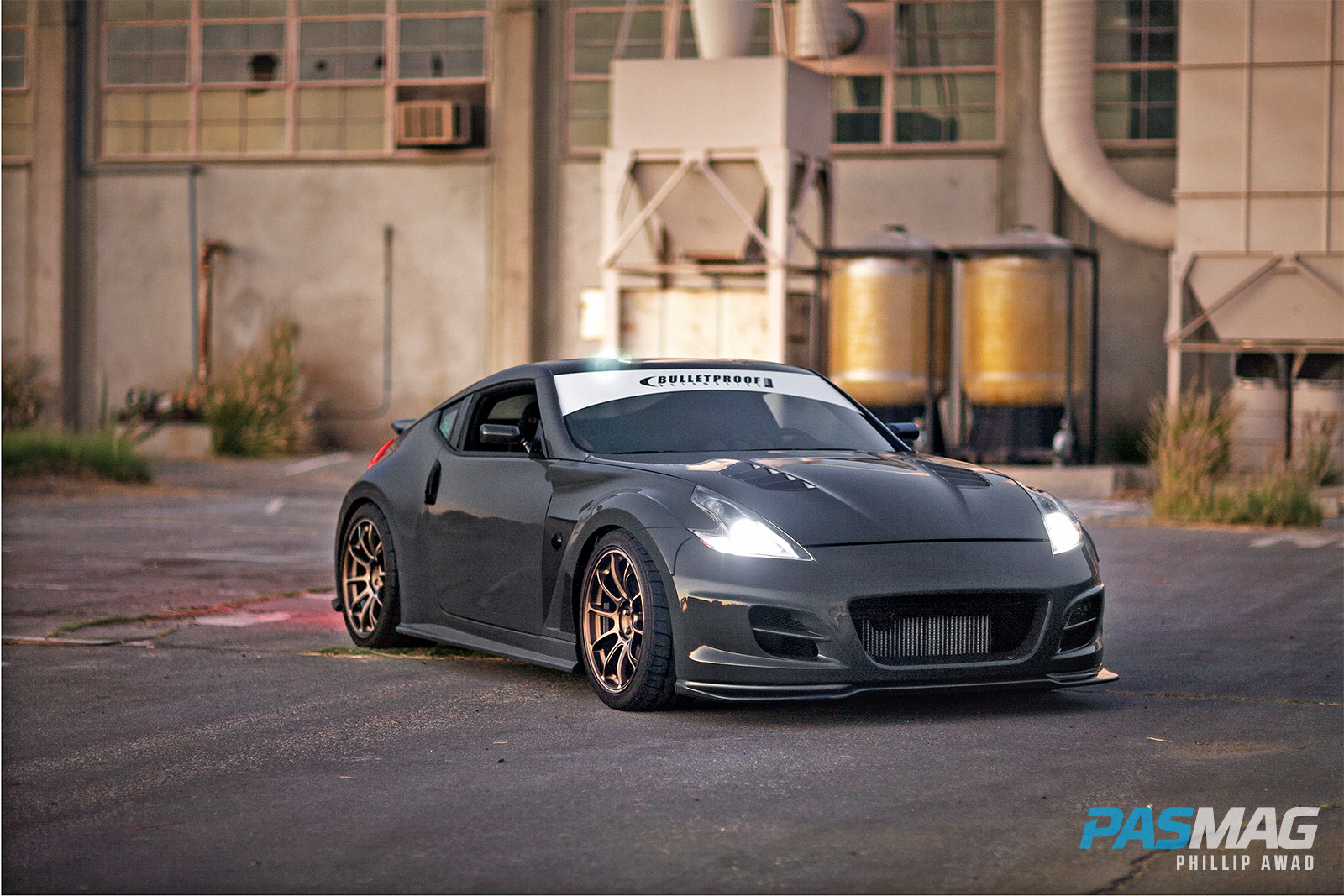 Some say it’s not what you know, but who you know. Others say the key to success is hard work and dedication. When you combine that work with a great network, it makes a blueprint for exponential growth and personal prosperity – whatever that happens to be. But it’s only when you visualize your dreams and start believing in them that things start to happen. And in the case of Derek Chan, that’s exactly what happened. 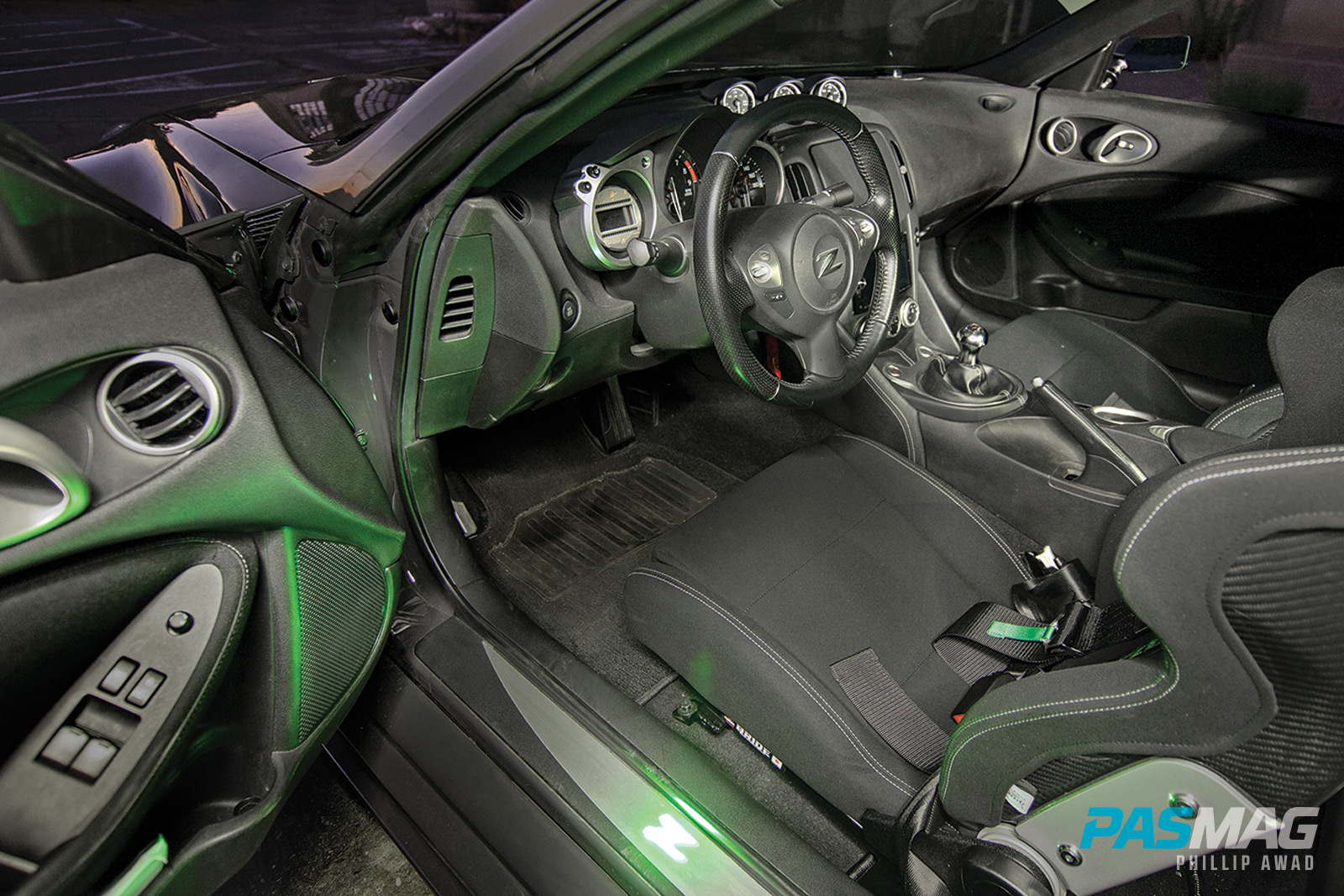 Chan’s 370Z is the culmination of a number of long-term goals, determination, vision and making the most of his opportunities. A byproduct of Bulletproof Automotive, this 2009 Z is something of an enigma; many people have seen and appreciated the 370 and it’s modified variations, but rarely are they done with such care, attention to detail and curation of fine parts.

Chan’s fortunes with his 370 have taken him on an adventure that began on a completely opposite end of the spectrum. His interest in cars began when he was young. As soon as he could drive, his passion directed him towards sports cars and the desire to modify them. That led to a Honda Civic Si Coupe with a set of Volk TE37s and some bolt-ons that Chan says, “don’t count.” 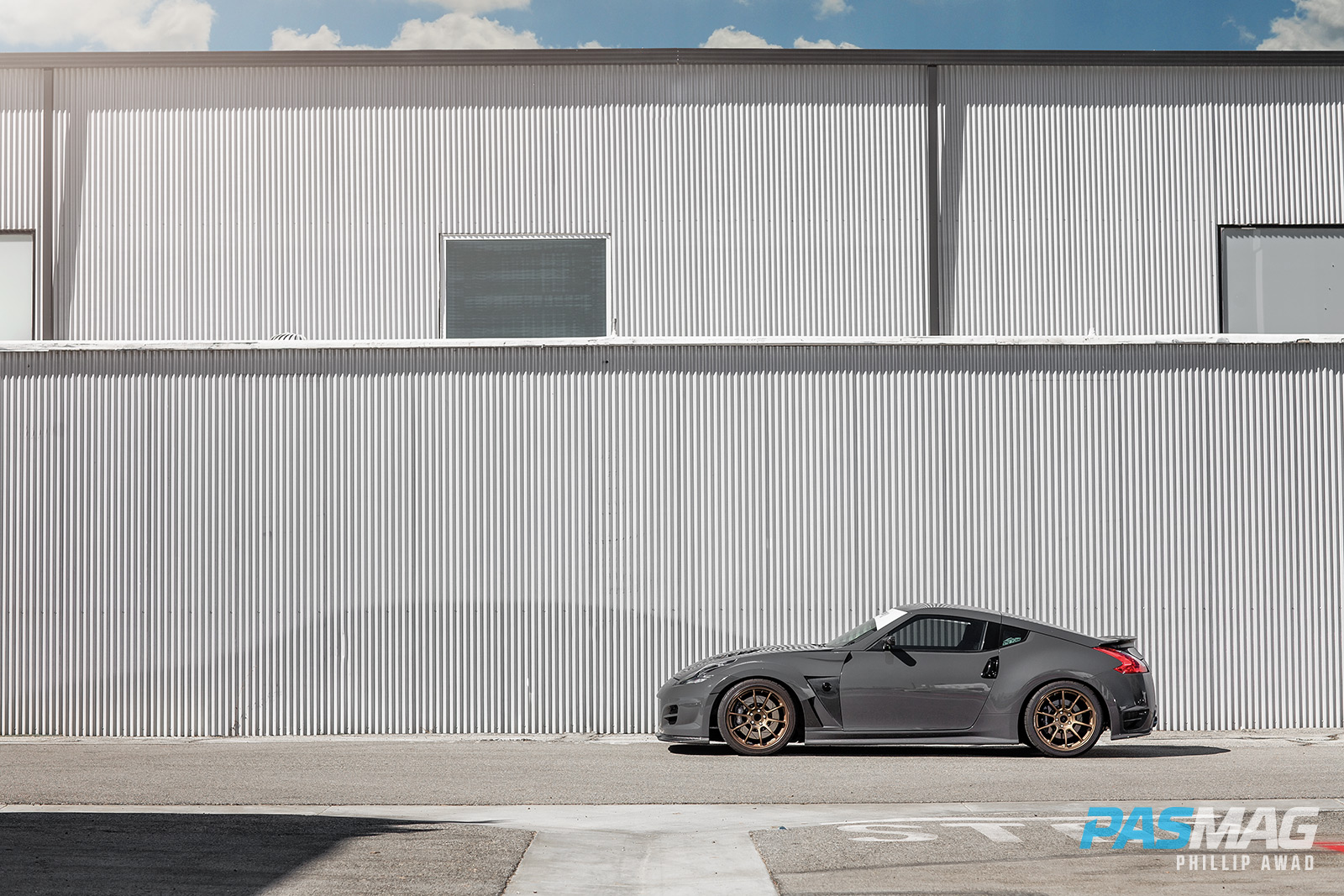 A college student and living at his parents, Chan was working at a self-serve frozen yogurt shop. Keeping an eye out for the next opportunity, he was saving his money for a fresh tuning platform, something a step up from his Civic.

Looking at the latest platforms, the Nissan Z33 appealed to him in a number of ways.

“When the 350Z came out, it was the best of all worlds – it was fun to drive, sporty, affordable and a really good bang for the buck.” 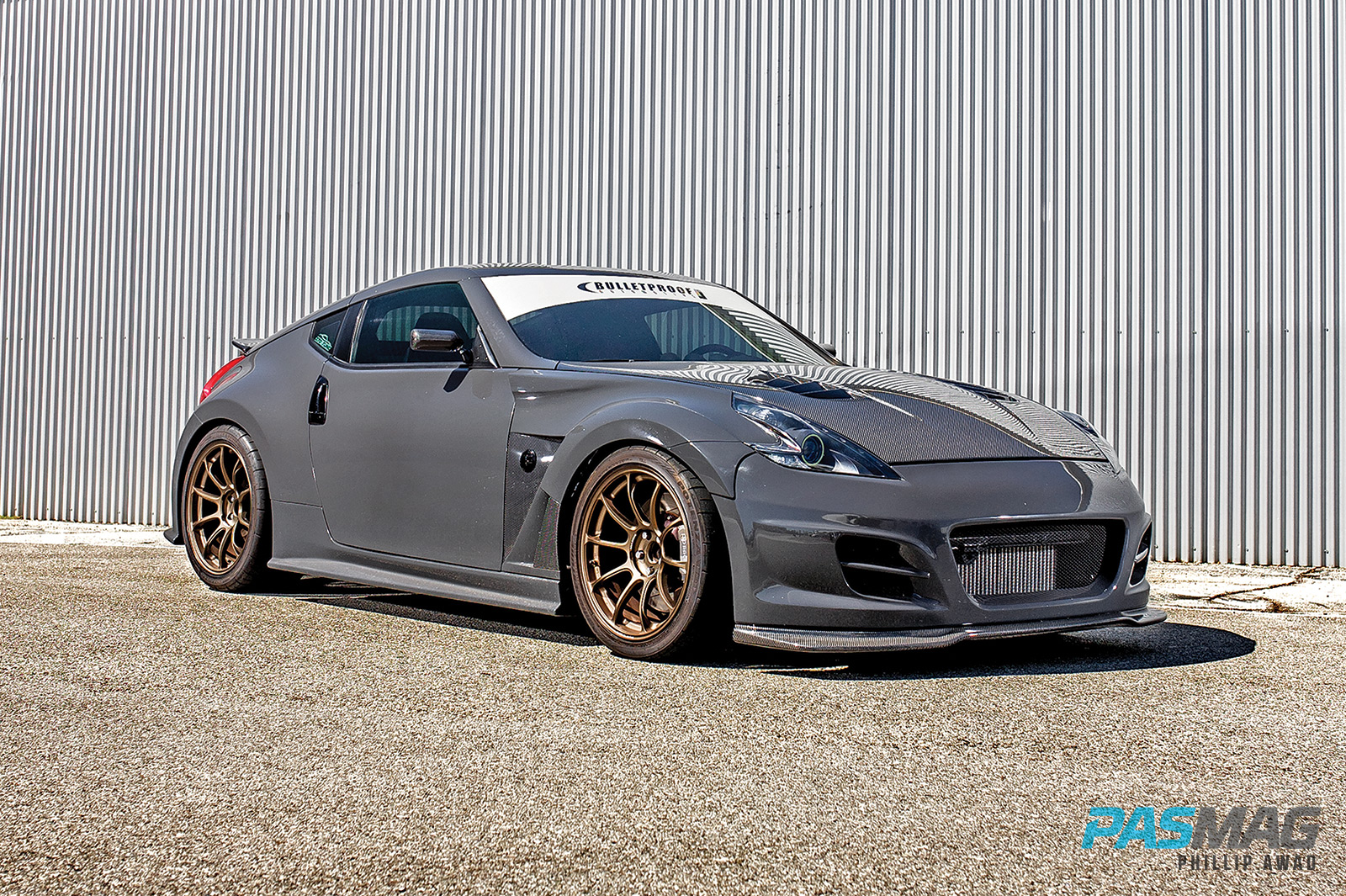 That all changed in 2009 with the release of the 370Z. It was sleeker, had an additional 25 horsepower, a shorter wheelbase, wider track and independent suspension all around. So, when Chan caught wind of the new model, the Z34 was immediately bumped to the top of his list.

“It was right when the 370 came out. It was actually a toss up for me, because the dealer I went to had a Nismo 350 and the 370. They were literally the same price because it was an outgoing model.

“So I could’ve got a loaded Nismo instead of the base model 370, but I wanted the new thing. I liked the aggressiveness of it, and Nissan marketed it as an upgrade in every way. On paper, why wouldn’t I get that? Plus I knew I was going to mod it anyways, so I figured it would be better to work with the blank 370 canvas.”

Relatively untouched for the better part of three years, Chan dressed his 370Z with a set of Advan RG IIs, some coilovers and light styling and performance mods, but it wasn’t until two years ago that his ride, and his life, embarked on a new journey altogether. 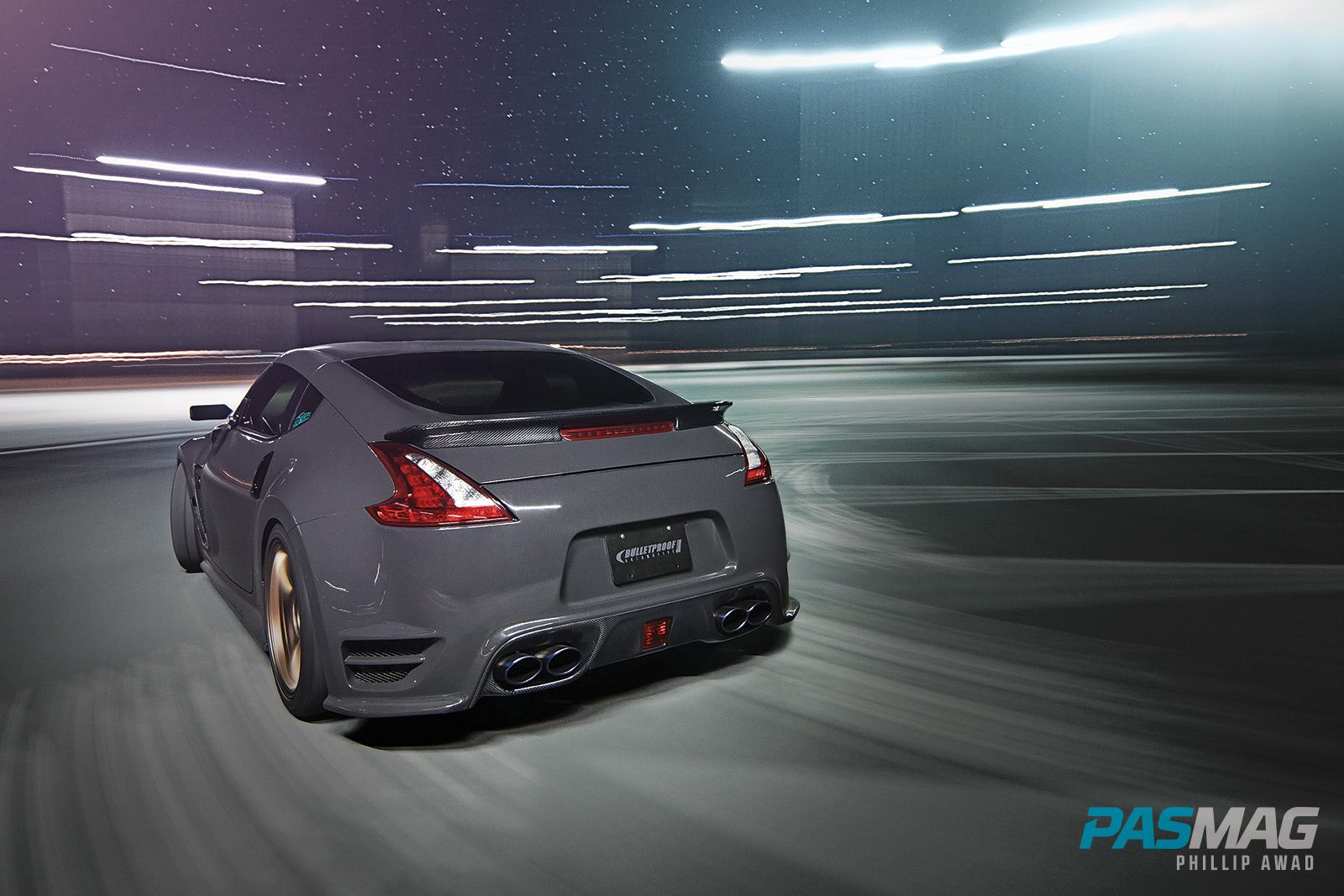 “I graduated from college and was looking for a job in the summer of 2012. I saw Bulletproof was hiring, and I knew they were the main importer of Zele in the U.S. I’ve wanted this particular body kit since it debuted at the Tokyo Auto Salon in 2009, so during my interview I told them I have a 370 and I want the Zele kit. They said, ‘Oh yeah, we can bring that in for you!’ So the interview went really well, and I got hired!” Step one at his new job was obtaining the Zele Performance body kit he’d been eying for three years. Saving his pennies for three months, he took advantage of his new workplace discount and, as they say, the rest is history. 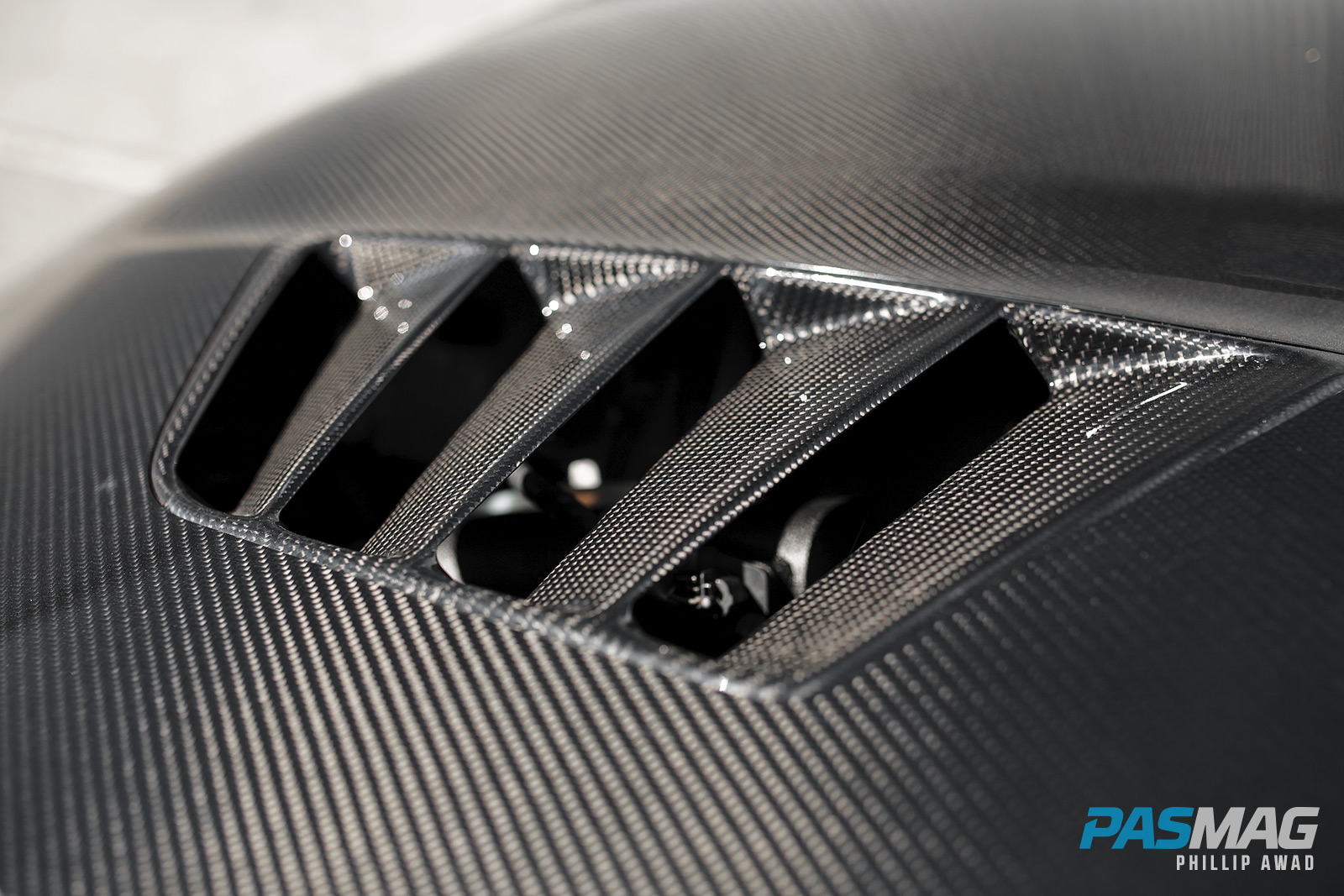 It marked Chan’s first official mod as part of the Bulletproof Automotive team but, as he soon realized, it wouldn’t be long before more followed. 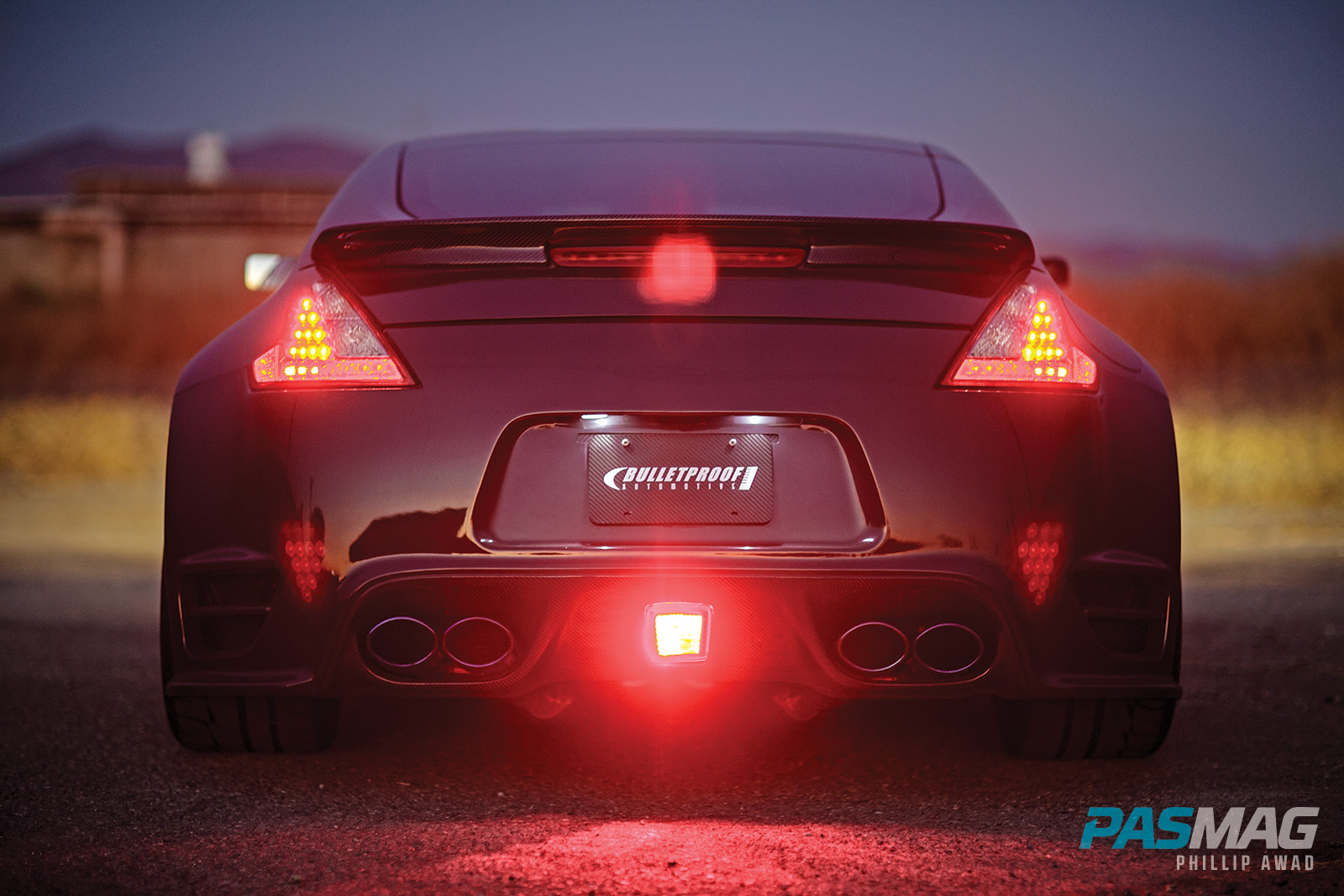 For starters, because of the kit design, it only works with a custom exhaust setup, or Zele’s proprietary exhaust. This was a major problem because Zele previously discontinued its system, but after some heavy convincing on behalf of Chan and Bulletproof, the company decided to make three additional versions of the kit. So Chan had one, complete with quad titanium exhaust tips. 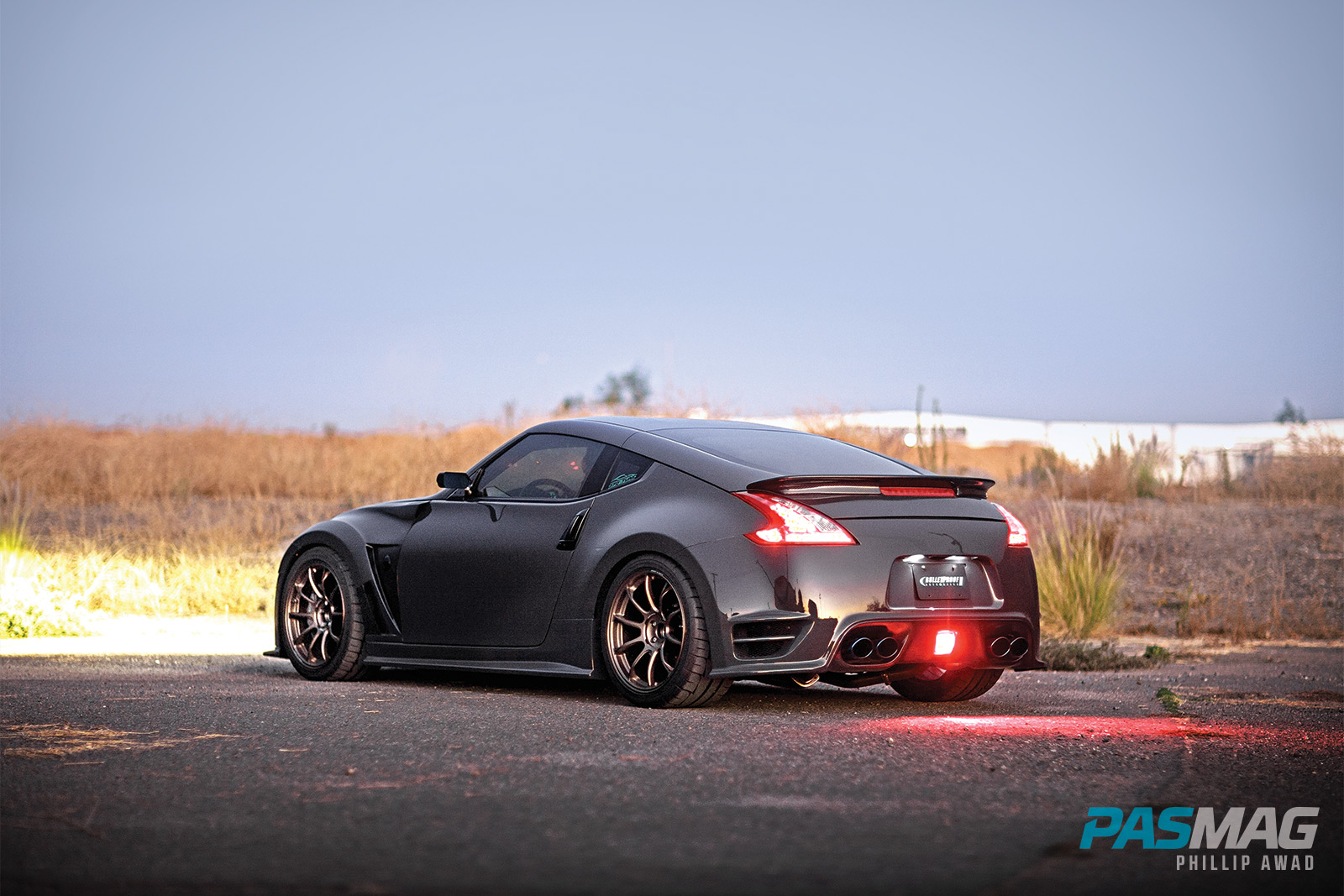 Matching the aggressive setup of the Zele body kit, Chan sourced a set of Varis carbon fiber wide front fenders, a Varis cooling bonnet and Craftsquare TCA-F side mirrors that sets his car far apart from many other cars – let alone 370s – on the street. 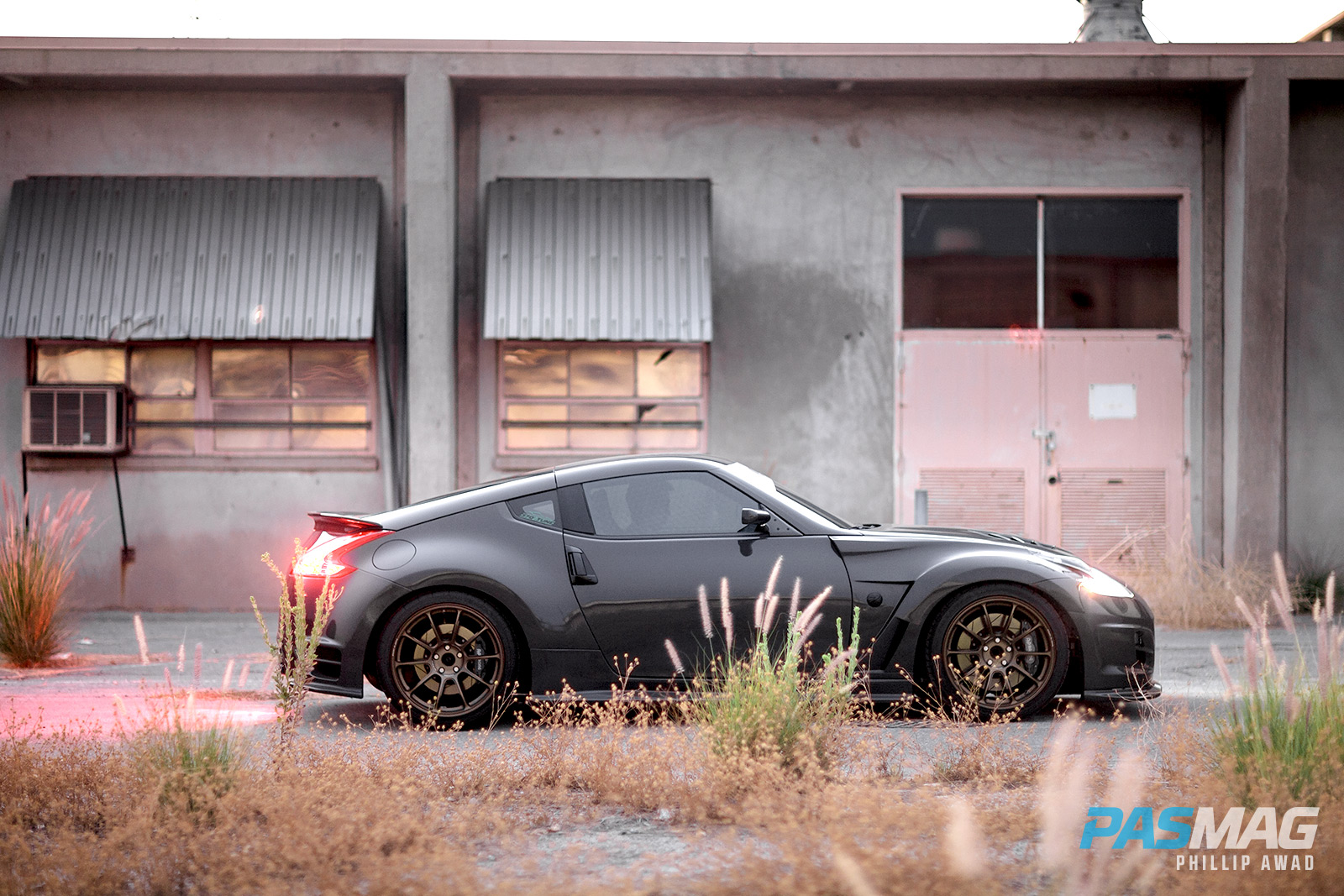 The car rides low on a stiff set of Powerhouse Amuse Bilstein coilovers, so Chan is planning to protect his priceless exhaust and bodywork with skid plates in all the proper places – which, given the Z’s capabilities and California’s constant threat from construction, hilly terrain and awkward driveway entrances, will likely be used more often than not.

But his impressive list of goods doesn’t stop there. Like the rest of his build, Chan went far into Japan to source his parts. 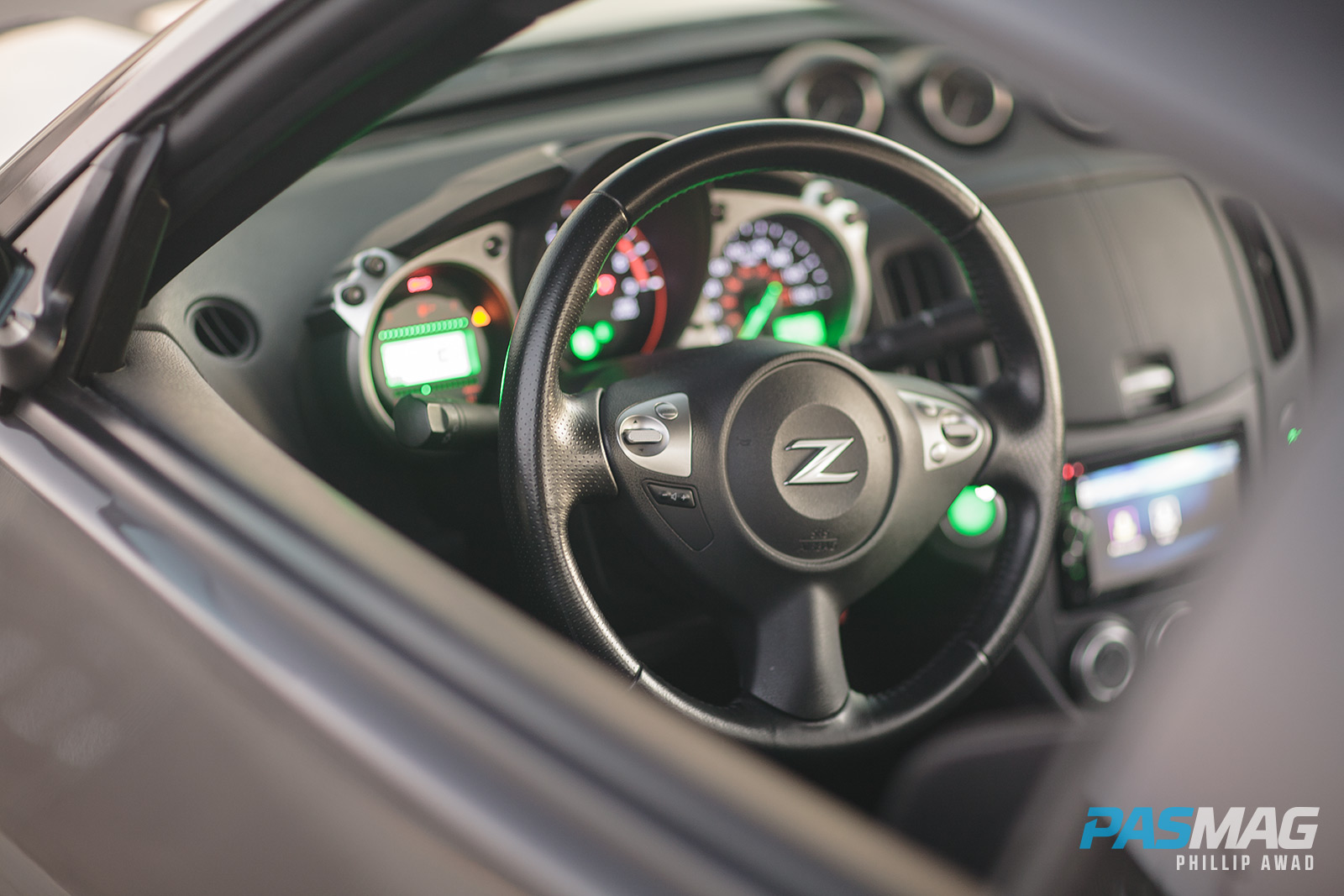 “My favorite aspect of the build is all of the hard work put into finding exclusive and rare Japanese parts. Some of them are one-offs and others are discontinued, which makes for an awesome build because very few people have the same stuff I do. That, and I’m a huge advocate of keeping the industry alive by supporting the people and companies who continue to innovate and push out groundbreaking new products.

“You don’t see 370s too often, but they’re well represented on the forums. There are lots of guys who go with U.S.-made parts, and there’s absolutely nothing wrong with that, but I felt that the Japanese tuning shops have a different mentality to what we do here. The quality and craftsmanship of some of these parts is unbeatable.” 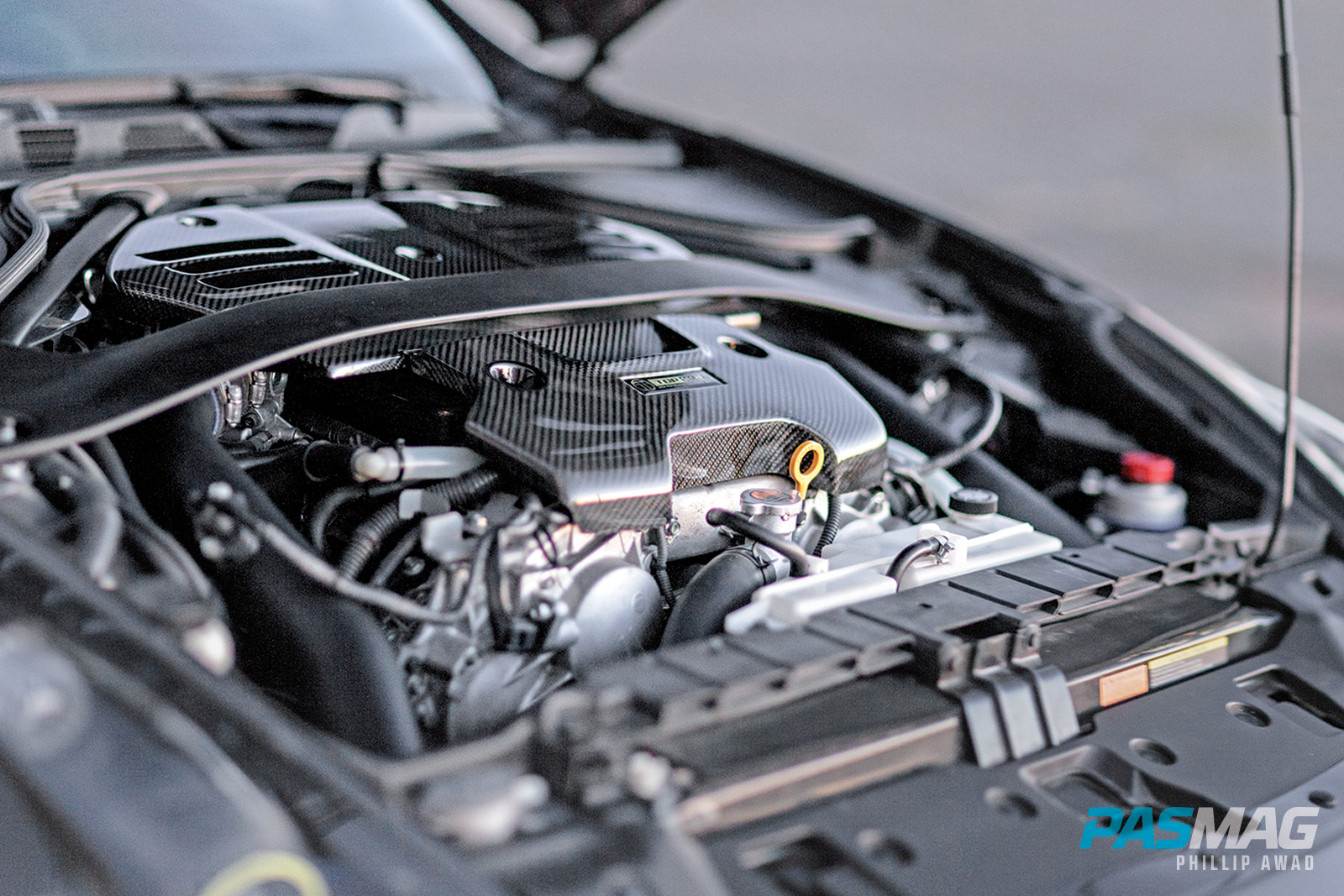 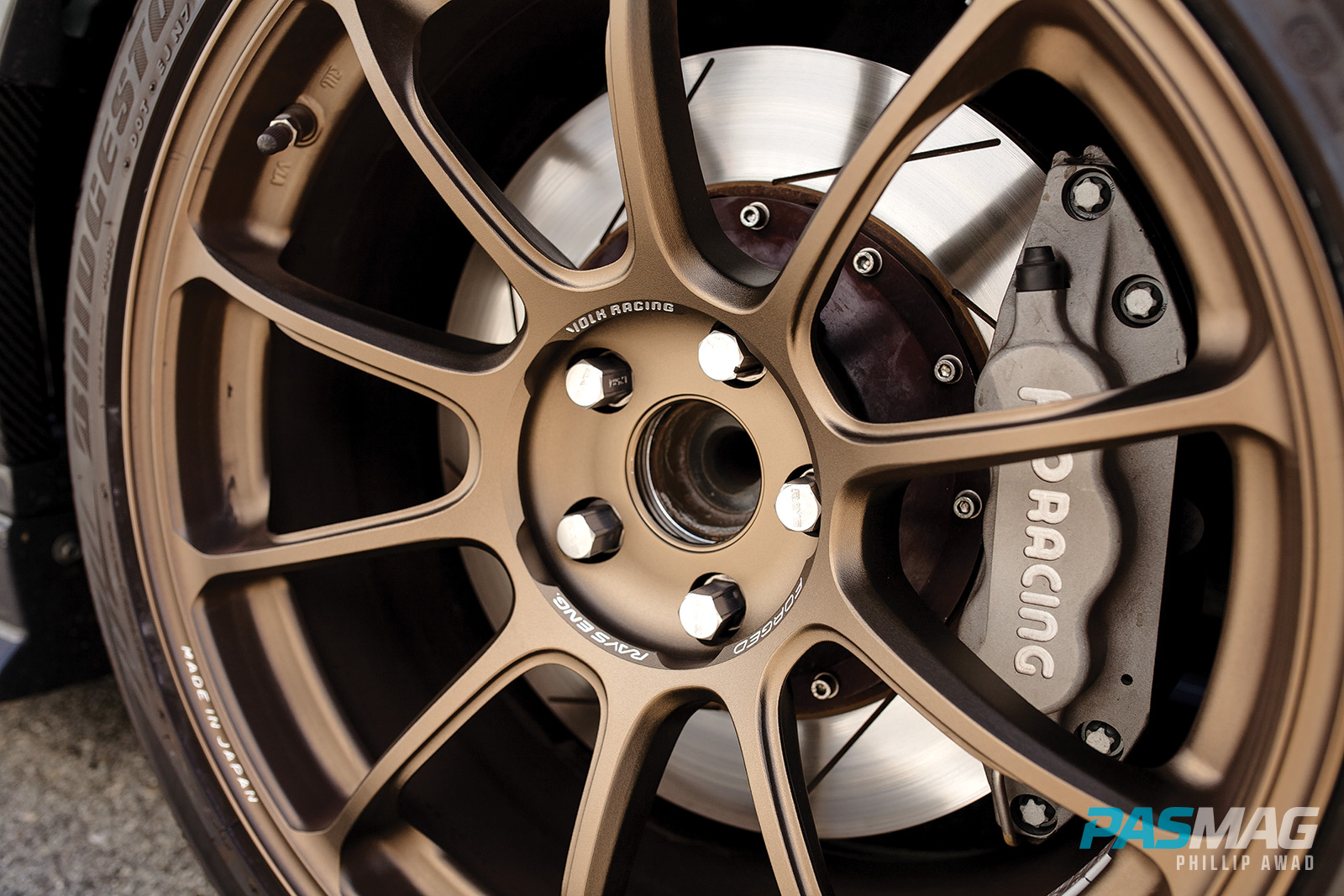 Needing equal power-reduction equipment, Chan opted for six-piston AP Racing AP5700SG front brake calipers and four-piston rears along with two-piece slotted rotors, stainless braided lines and Endless RF650 fluid. Chan says he chose it because it makes for a system that can literally do it all.

Even his Bulletproof boss, Ben Schaffer, shakes his head when he talks about the thought and work behind the car. 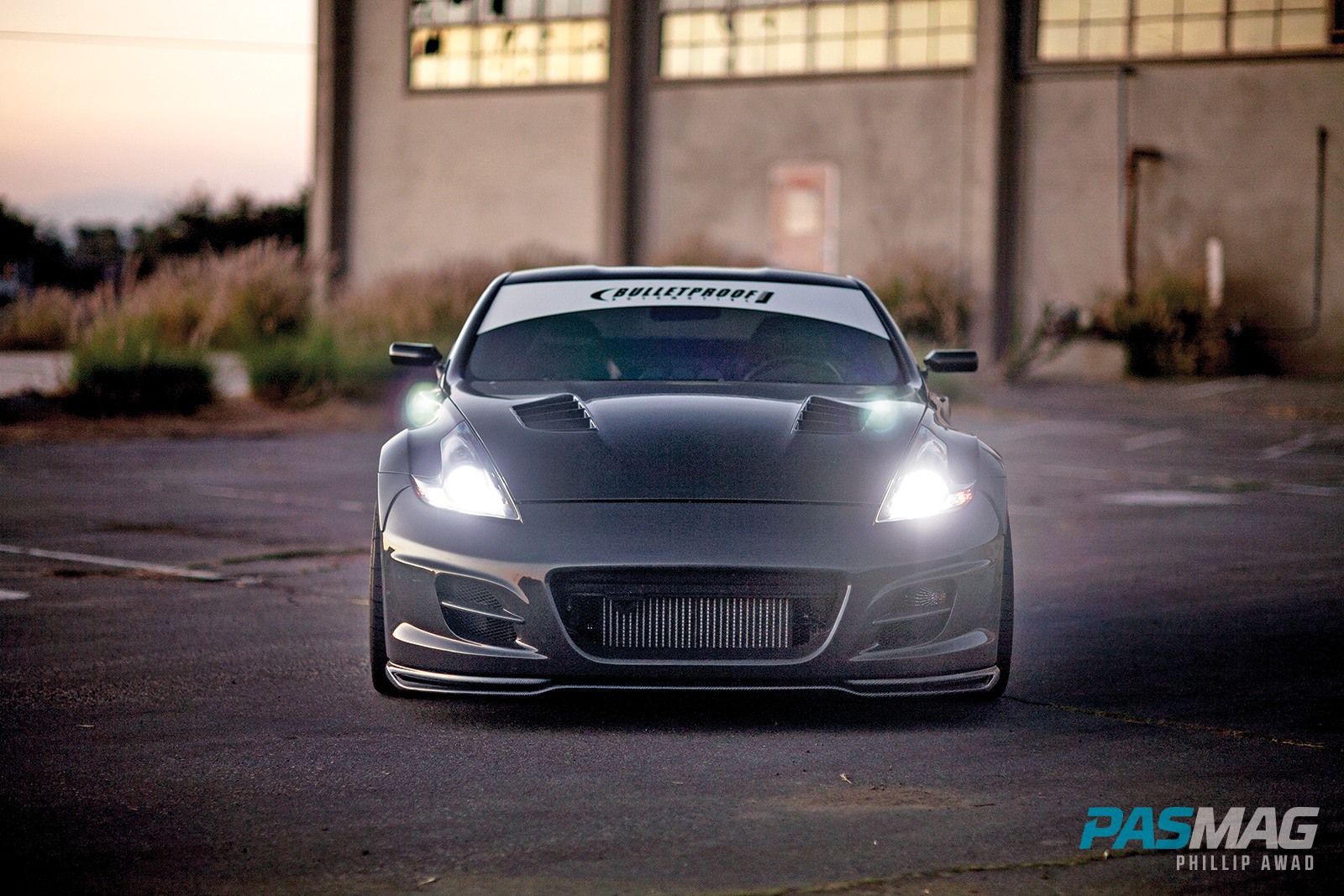 “The car is an all-around tuner car and balanced performer,” Schaffer says. “It has audio upgrades but it’s not a mobile electronics car, it certainly has power but it’s not a drag car, it has great suspension but it’s not a circuit car, and it has beautiful Porsche paint and a customized, very rare Zele aero kit, but it’s not a show car. It checks a lot of boxes and does so in balance.” 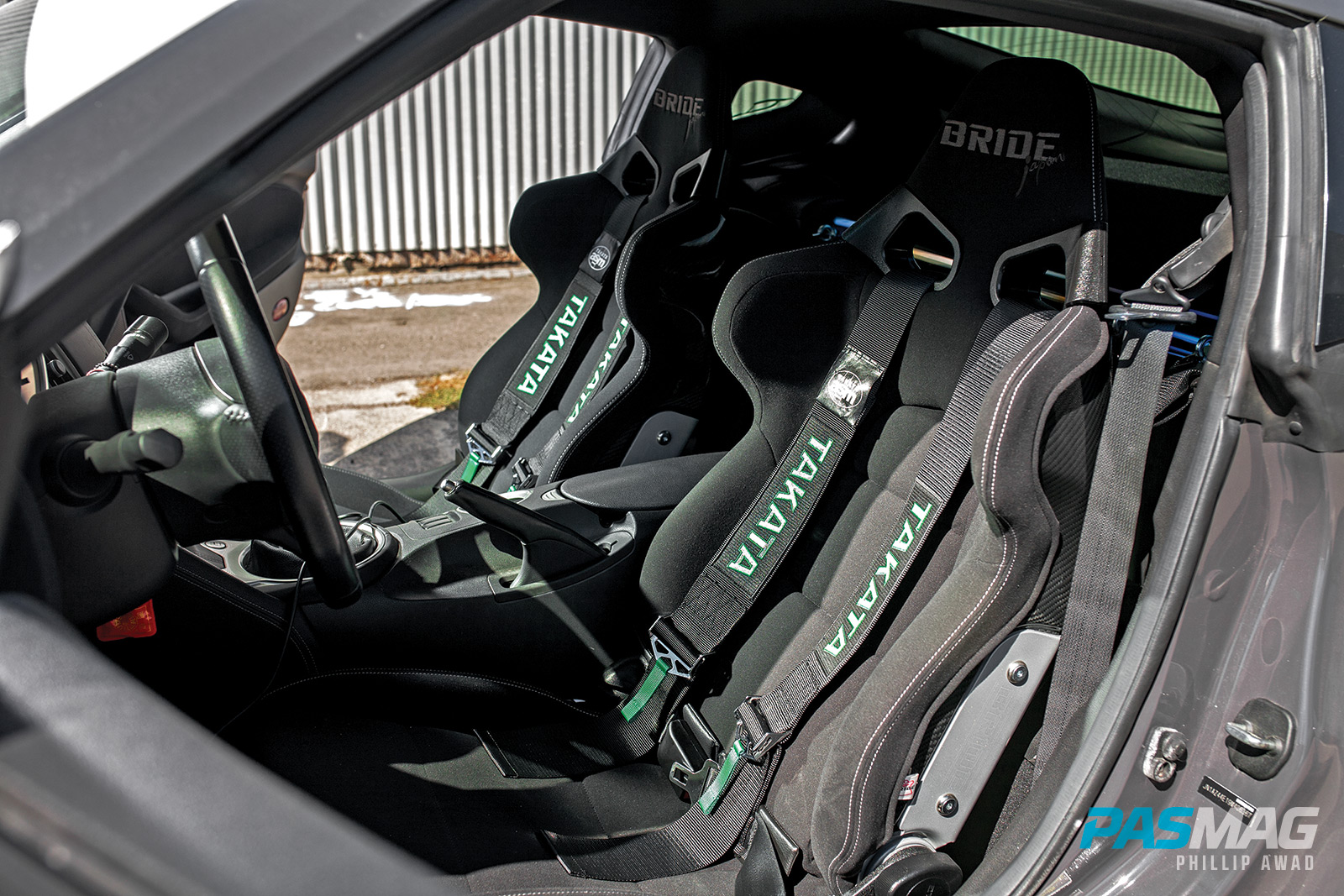 In fact, the 370 is so well balanced that, until recently, Chan was making his 100-mile work commute every day in it. If we had to sit in a set of Bride Vorga seats, listen to some ARC Audio components and a 10-inch subwoofer, and look past a set of Defi Advance and Innovate gauges for a couple-hundred miles each day, we probably wouldn’t complain either. 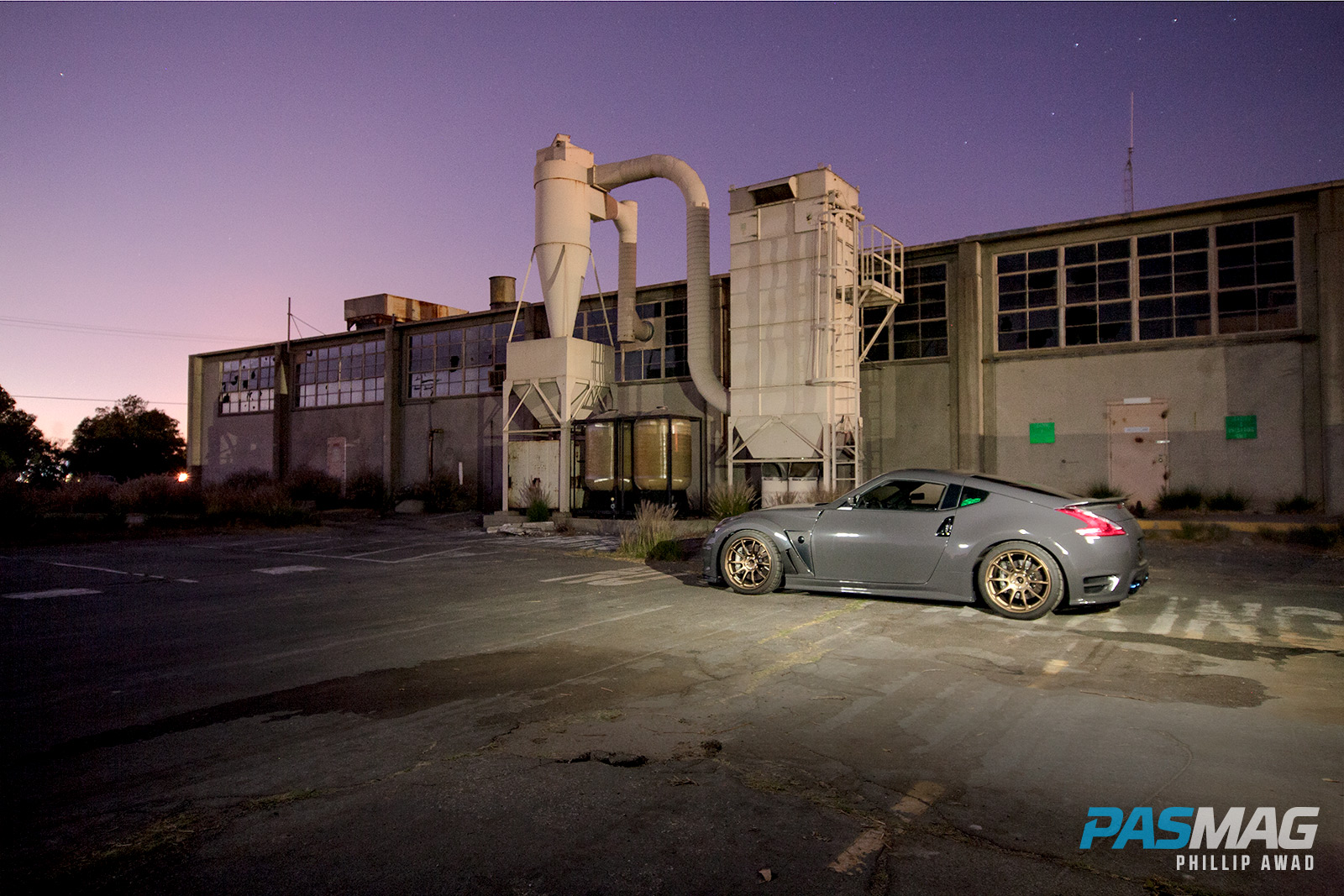 Today, he saves his prized possession for real drives: up and down Mulholland Drive, along Newport Beach and down the Pacific Coast highway. Talk about hard work paying off. 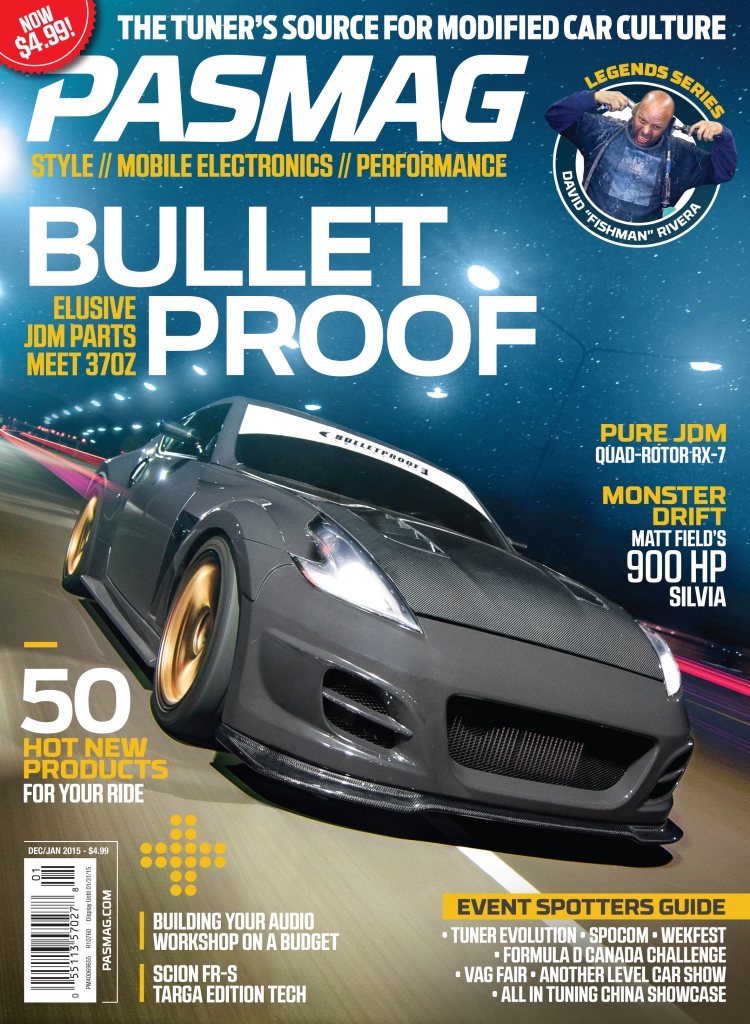 SPECIAL THANKS
My best friend, Karen Huang. She’s been by my side since day one. Without her neverending support, this build would never have happened.
My friend and project manager, Jonny Grunwald, because there were times when I gave up on continuing the build, but he took it upon himself to make sure the job got done properly.

To the companies that helped me in the build: Americoat, Auto Explosion, Auto Talent, Bride, Bulletproof Automotive, Church Automotive Testing, CJ Motorsports, Corner3 Garage, Cusco, Dynamic Mobile Audio, GY Custom Lighting, Mackin Industries, Powerhouse Amuse, Varis, Zele, ZSpeed Performance.
Last but not least, my parents, my sister, and all of my friends for putting up with me and my crazy hobby!

GaleForce: The Z34 Kamikaze Typhoon
Photography by George Bucur A hometown hero is someone to look up to. A local that excels in their respective outlet and lights up the field that...

Earth Shaker: Mallory Wetherington's 2013 Ford F-150 FX2
In a world dominated by big trucks and big personalities, standing out in a crowd can be a difficult thing for a newcomer to pick-ups...

Reflection of the Past: Rui Paulo Nascimento's 2001 Audi TTRS
Building and dressing up an already established sports car like the Audi TTS is no easy feat, but to do it in a way like Rui Paulo...